Looking for a New Volkswagen Arteon in your area? 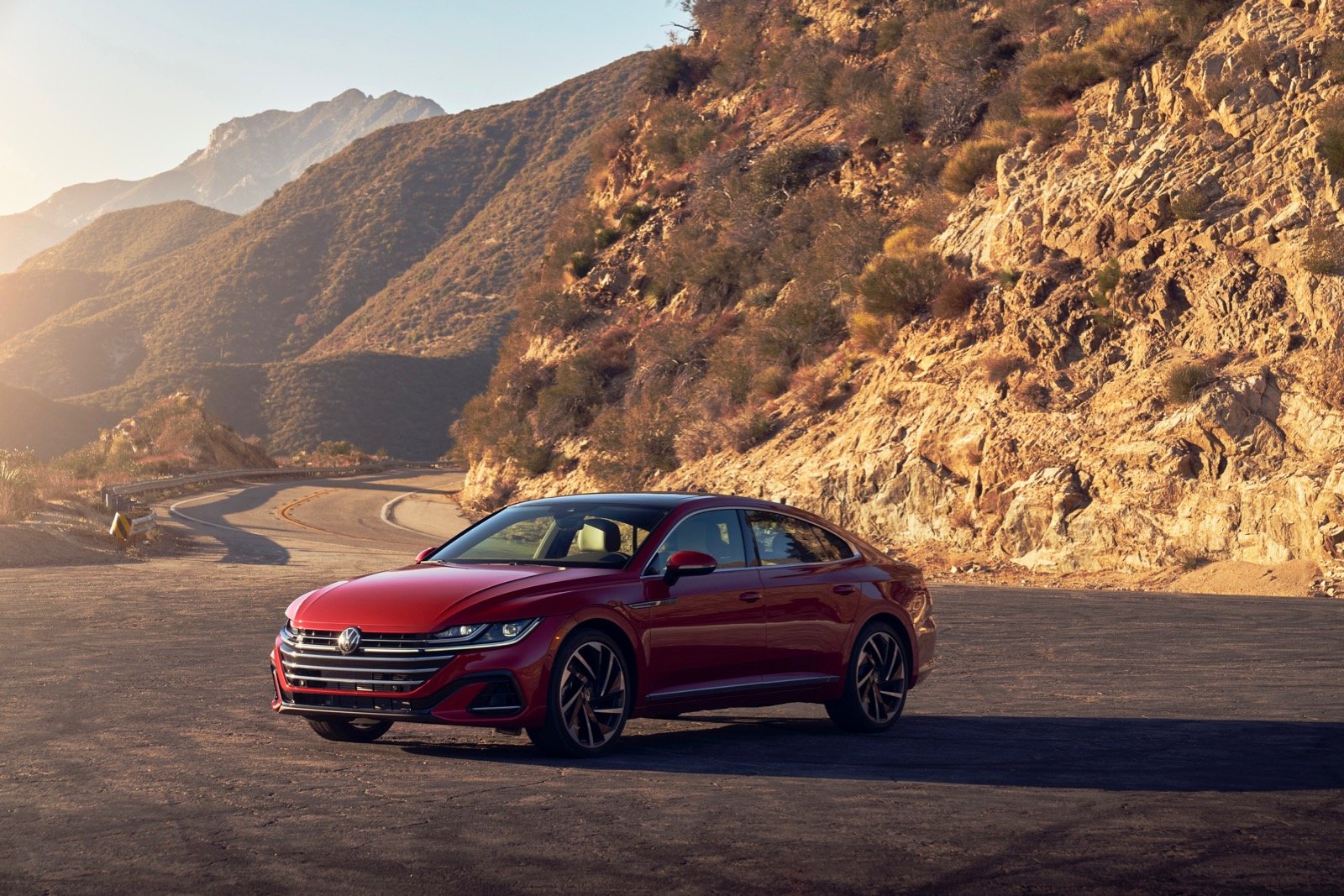 The 2021 Volkswagen Arteon arrives with upgraded styling, interior finishes, connectivity, and driver assistance. VW’s biggest current sedan is the brand’s flagship and serves as a showcase for the brand’s capabilities and technologies. The Arteon can be loaded up with available features to take it to near-luxury levels, while still keeping pricing below $50,000. 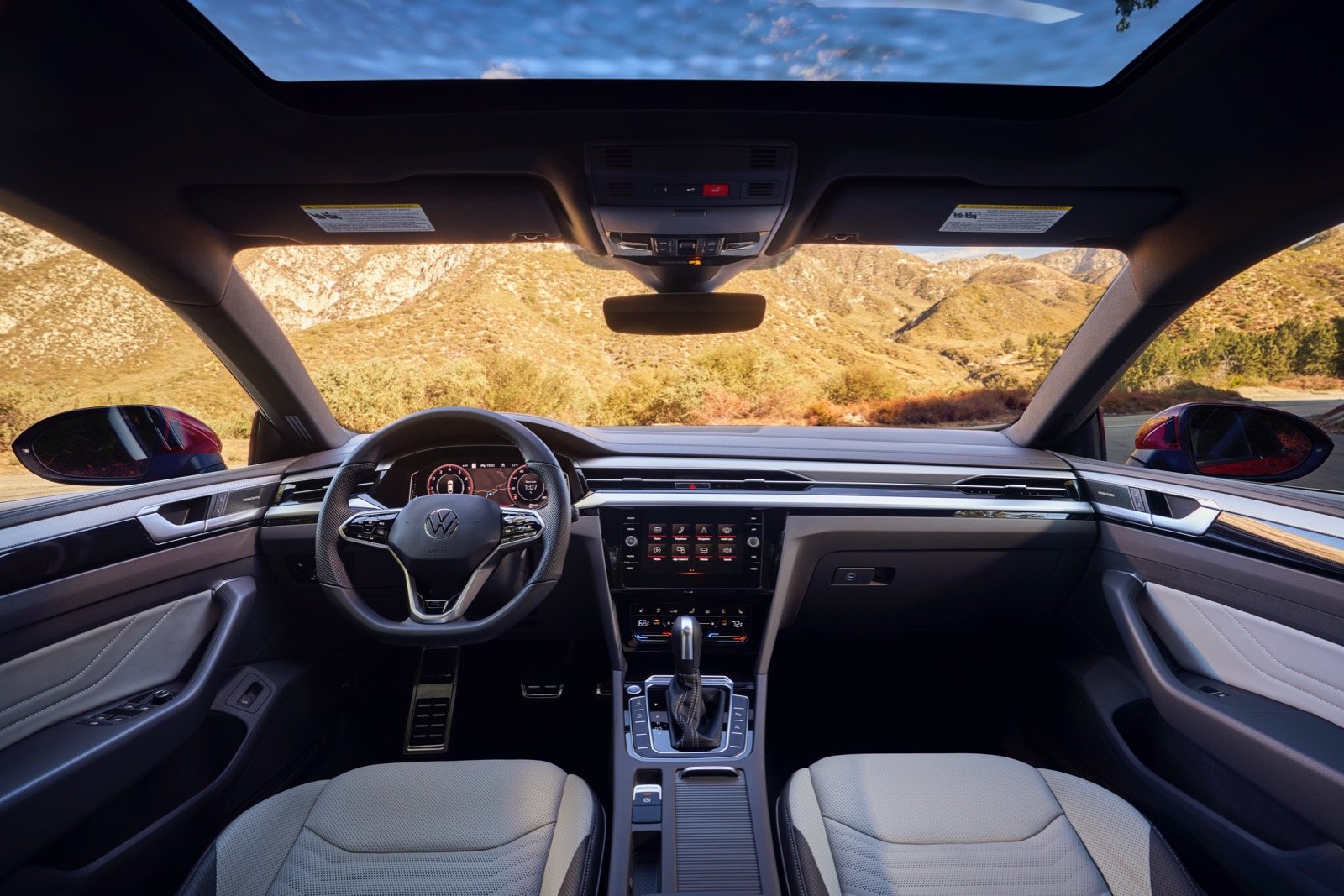 While Volkswagen has had remarkable success with compact and economy cars through its history, it has had mixed results with midsize and larger sedans. A look back at the Dasher, Quantum, Phaeton, and CC shows a crooked path with some modest wins and some flops. The Arteon debuted in the United States as a 2019 model, replacing the CC in the lineup, and returns for 2021 with some nice upgrades and a sharper vision of its purpose.

VW says the name “Arteon” is derived from the Latin word “artem,” or “art.” It describes the Arteon as a four-door coupe, but we’d call it a fastback sedan. The Arteon has a very expressive, graphic front end, with dual LED headlight arrays and LED signature running lights that are visually connected by a horizontal grille. The lines on the Arteon are all crisp and sharp, even where they outline or define an arch or curve, like the wheel wells. The whole vehicle has a sculptural, chiseled aspect.

The low roofline and shallow windshield give the greenhouse a windswept appearance. The hatchback—which opens at a hidden hinge above the rear glass—mimics a conventional notchback trunk, but gives fantastic access to the cargo compartment. Fit and finish on the exterior are superb, and the overall effect is a class up—it wouldn’t be out of place in the Audi lineup, for instance.

Inside, it’s more of the same—and that’s good. The designers made great use of the horizontal elements on the dash to underline and emphasize the cabin’s width, and the narrow center console makes the most of the driver and passenger foot boxes, knee space, and hip space. There’s a beautiful sense of balance and symmetry in the cabin, and everything has a quality look and feel. 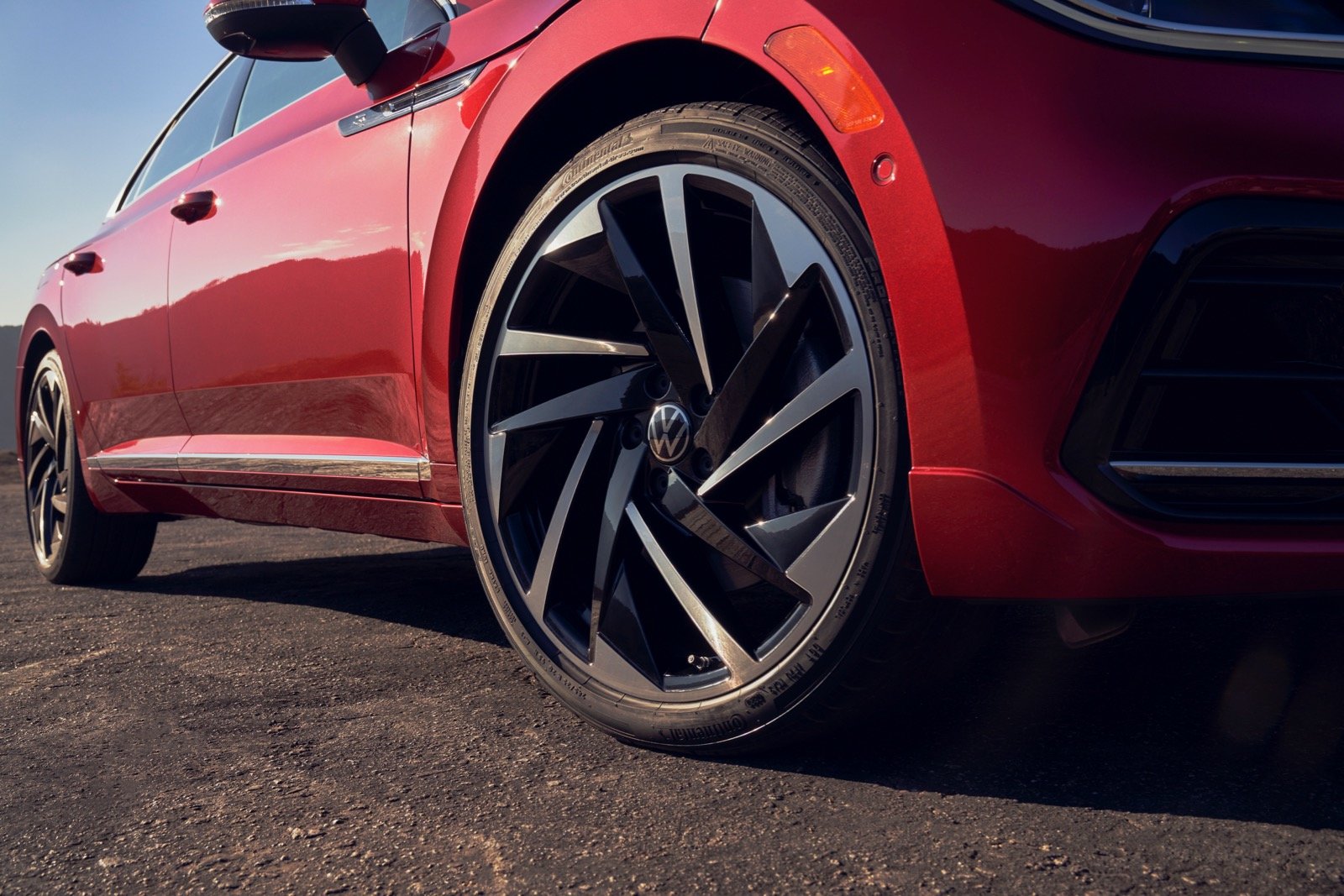 This is the same powertrain you can find in the Volkswagen Golf GTI and Jetta GLI, but is tuned to put out more horsepower here. The Arteon is two feet longer and 500-600 pounds heavier than the GTI and GLI, but the 2.0-liter turbo is up to the task of motivating the fastback sedan down the road. Enthusiast drivers will be uninspired by the acceleration, but most drivers will be satisfied. EPA fuel economy figures of 22 mpg city/32 mpg highway/25 mpg combined for FWD and 20 mpg city/31 mpg highway/24 mpg combined for AWD are good for the class.

What the Arteon lacks in pure power it makes up for in adaptability and comfort. VW beefed up the chassis to “accentuate the Gran Turismo spirit of the car.” Anti-roll bars are fitted both front and rear, and the suspension is fully independent (struts front/four-link rear), with standard adaptive damping on all four wheels. Three drive modes are available for selection (Comfort, Normal, and Sport) and adaptive suspension can further be adjusted to Comfort+ and Sport+ settings.

The Arteon shines in Comfort mode, as it cruises beautifully and serenely down the highway, absorbing bumps and cracks without transmitting them into the cabin. Very little extraneous wind or road noise intrudes, and the Arteon sails beautifully. Curvy roads are well-served by the Sport setting, though a little more grunt to power out of turns would be appreciated. The Arteon would be a great companion for anyone who has to spend a lot of time behind the wheel while ferrying passengers, like a real estate agent. 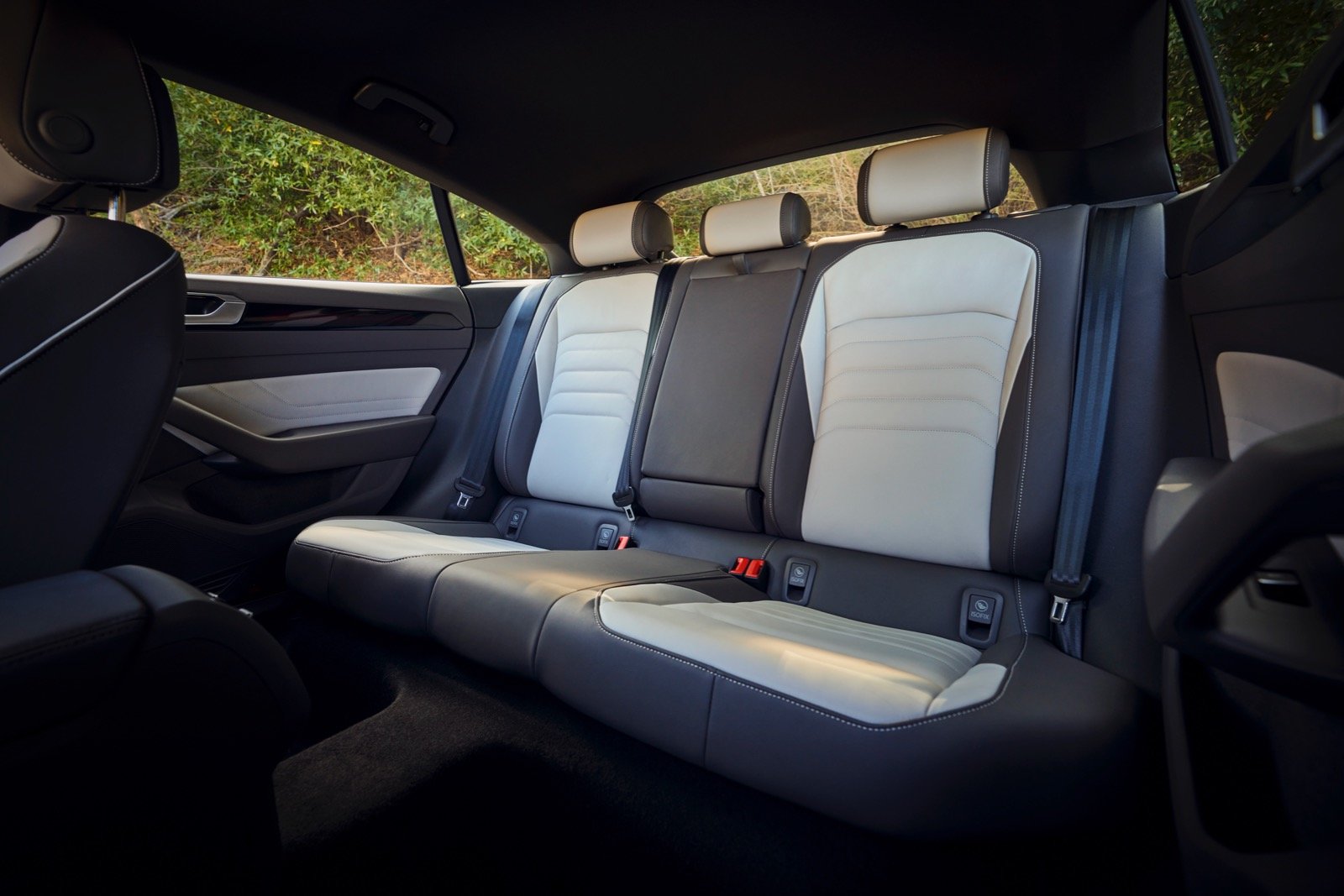 The Arteon shares Volkswagen’s MQB platform with the Golf, Jetta, Passat, Tiguan, and a few other vehicles. One of the big differentiators between models on this platform is the wheelbase, and the Arteon sports 111.9 inches—longer than all but the Atlas crossover in the current VW lineup. This contributes directly to the smooth ride we praised above and also makes for a generous interior, notably in the second row of seating. Back-seat passengers get 40.2 inches of legroom, almost as much as Is allotted to the front row (41.2 inches). Shoulder room is also good, at 54.7 inches. Two adults can be very comfortable in the second row, and a third can squeeze in for a short ride.

The fastback design pays off big time when it comes to cargo space. There are 27.2 cubic feet of luggage space behind the second row. The rear seats can fold flat in a 60/40 split, opening up a potential 56.2 cubic feet of cargo space. Not only is this a lot of space in a sedan, but it is also incredibly accessible and useful space, thanks to the fastback’s rear liftgate. With a payload capacity of 904 pounds, the Arteon can be a very useful vehicle.

Elsewhere in the Arteon, thoughtful storage options are offered. The center console is nicely sized, as is the glove compartment. Big door pockets in all four doors can hold a water bottle and tablet computer. There are map pockets on the backs of the front seats and even some storage under the load floor in the trunk beside the temporary spare. 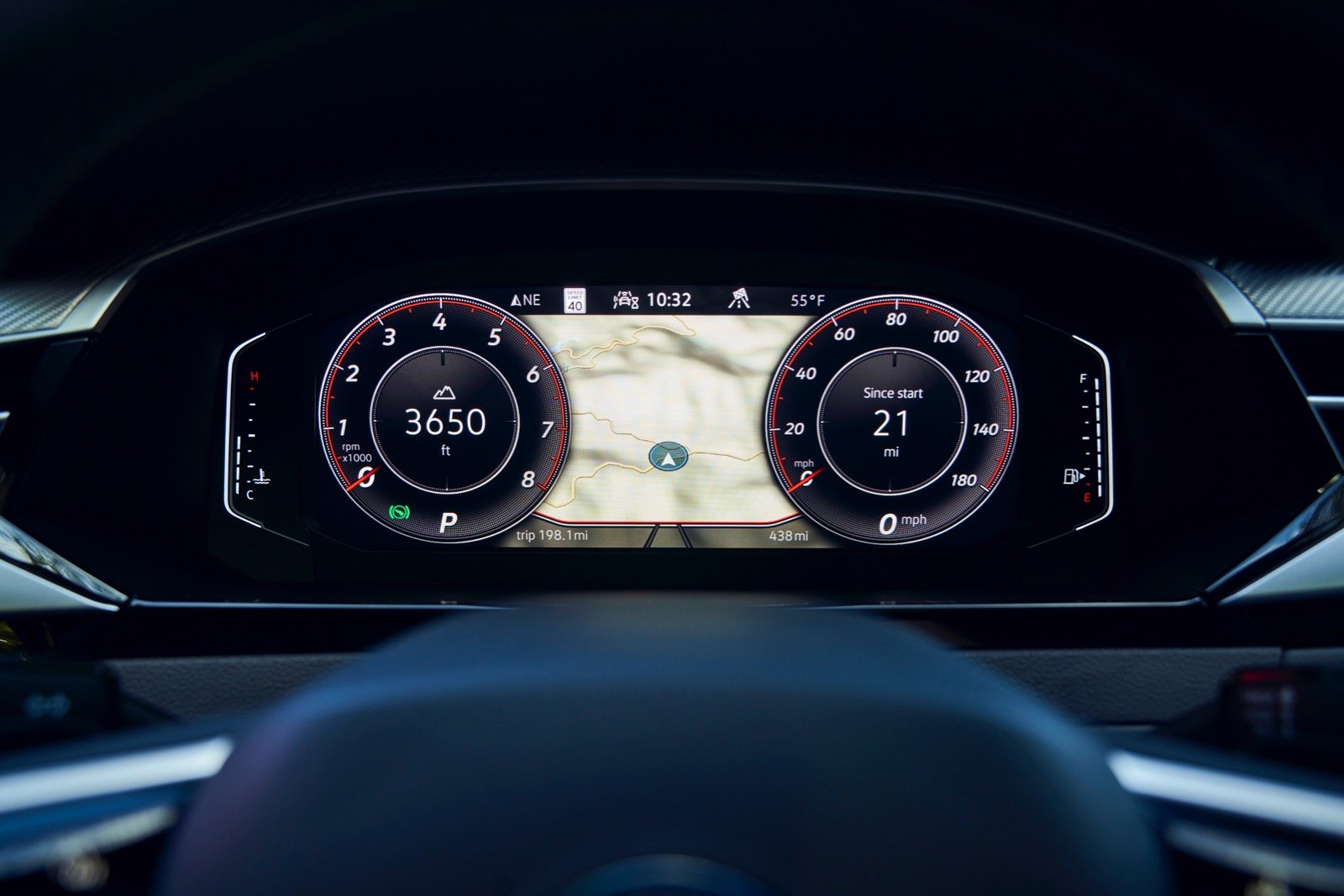 As a halo car, the VW Arteon gets all the latest and greatest technology Volkswagen has to offer. Probably the showiest and most desirable feature is the Volkswagen Digital Cockpit, a close relative to the Audi Virtual Cockpit. This standard feature is a configurable instrument panel with a 10-inch thin-film transistor (TFT) display. There are 21 viewing options from car status to navigation to phone information and more. It’s a stunning way to render the instrument panel, and very useful and user-friendly.

Volkswagen Car-Net is standard with a mobile app, with Remote Access, Safe & Secure, and Hotspot features. Through the app, owners can choose to add additional optional capability for infotainment and navigation. Amazon Alexa skills have also been incorporated into Car-Net, allowing owners to use Alexa voice commands to send remote commands to the Arteon. Hotspot can connect up to four devices to the Internet simultaneously at 4G LTE speed with a Verizon or T-Mobile unlimited data plan for $20 per month.

LED headlights, taillights, and daytime running lights are all standard on the Arteon, as are heated power outside mirrors and ran-sensing windshield wipers. 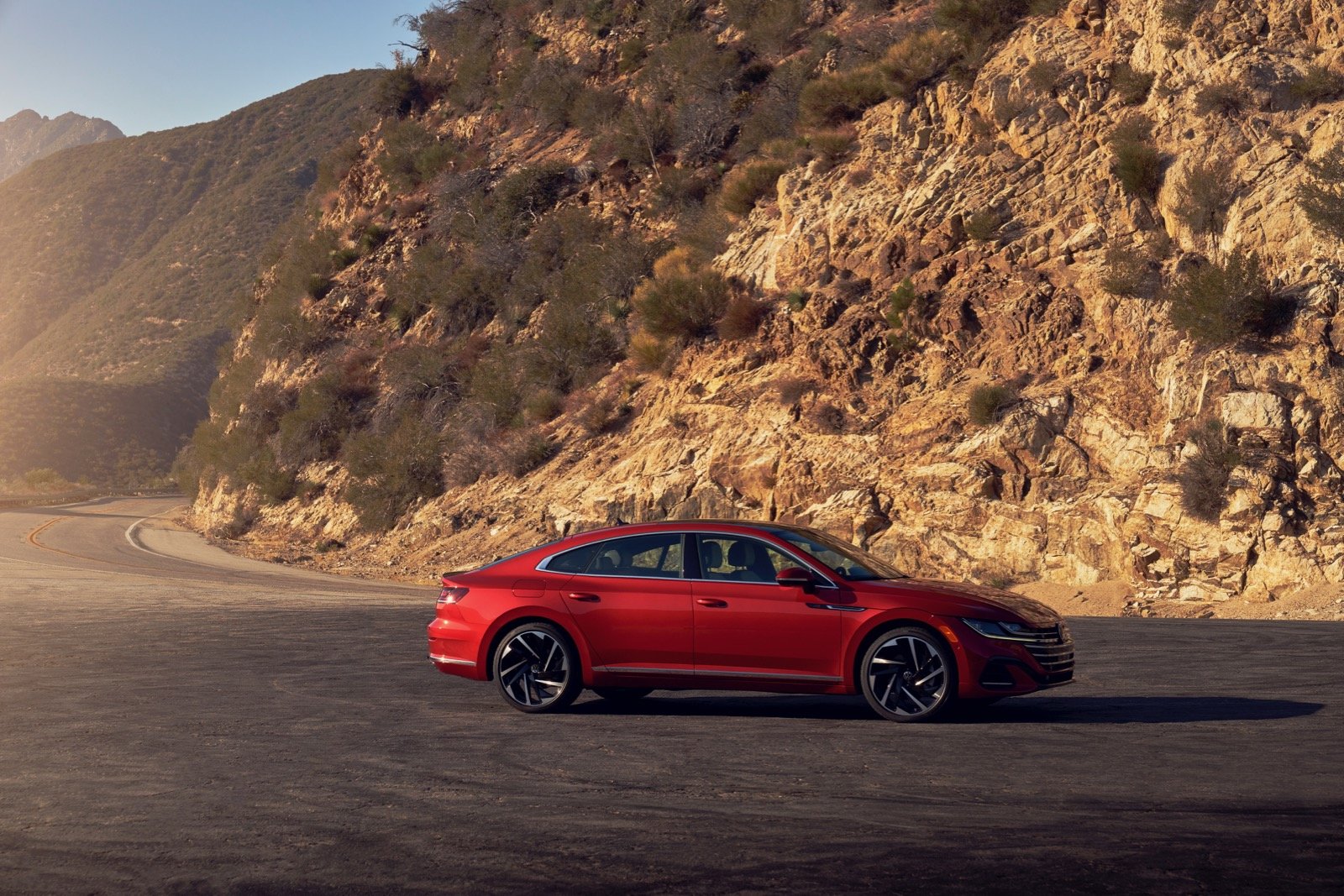 The 2021 Arteon was recently awarded a Top Safety Pick+ rating by the Insurance Institute for Highway Safety (IIHS), but ratings have not yet been announced by the National Highway Traffic Safety Administration (NHTSA).

Volkswagen has loaded up the Arteon with a broad array of active and passive safety features. Passive safety includes eight airbags, anti-lock braking, a tire pressure monitoring system, and electronic stability control. Standard for 2021 is an automatic post-collision braking system, which applies the brakes when a collision is detected by the airbag sensors. The idea is to reduce kinetic energy, and potentially mitigate further damage. Additionally, an intelligent crash response system shuts off the fuel pump, unlocks the doors, and switches on the hazard lights after a collision. A reactive hood can raise on its hinges in the moment before impact at speeds between 15-34 mph, which can help reduce pedestrian injury—in particular, head trauma caused by contacting the engine through the hood. 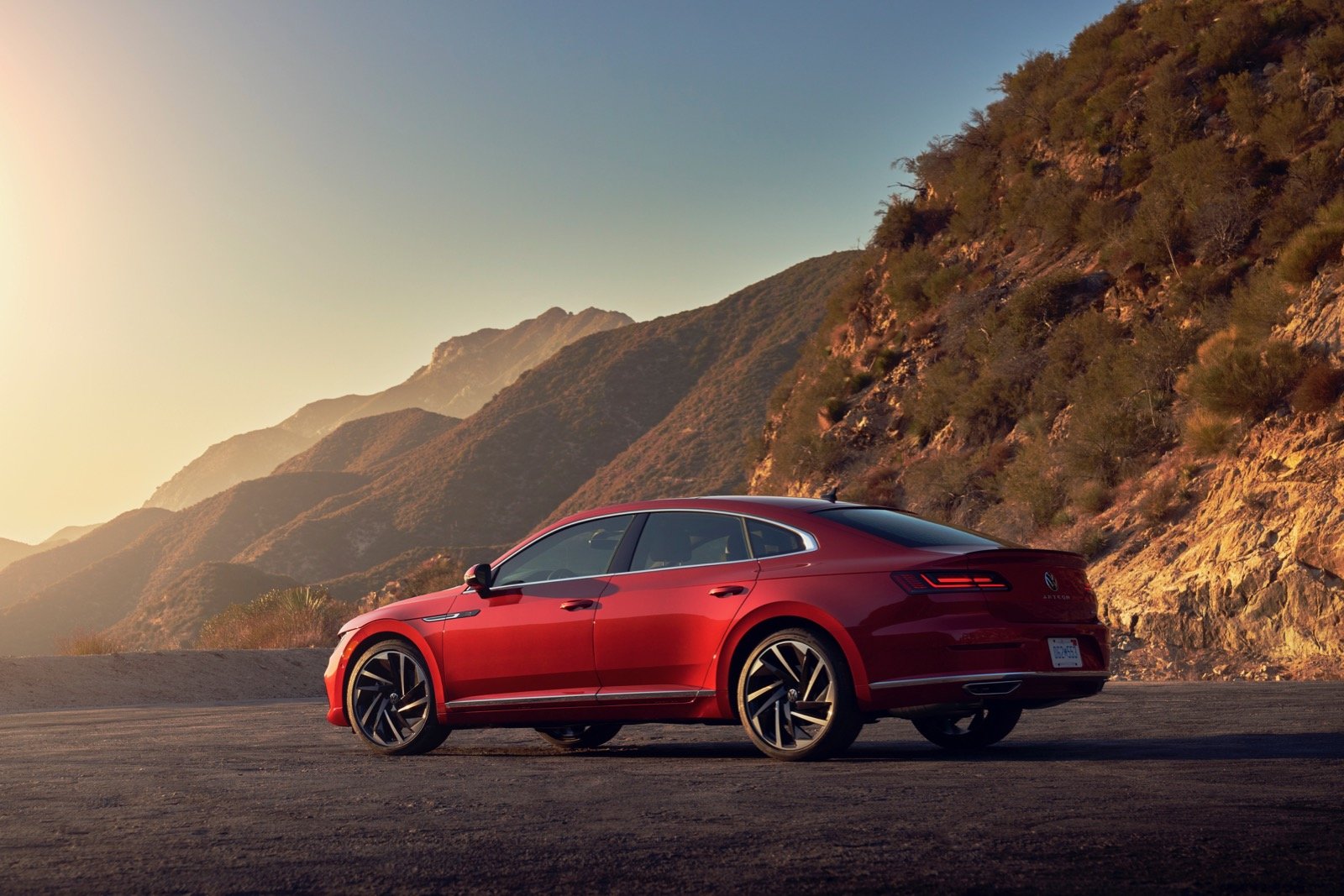 If you’re considering an Arteon, you’re going to find valid choices in the popular and luxury worlds. Consider the surprisingly roomy Honda Accord, the Toyota Avalon, the Mazda6, and the Kia Cadenza (recently discontinued, but still lingering on dealer lots). In the luxury category, the Arteon matches up nicely with the Genesis G80, the Volvo S90, and even the Audi A6.

In treating the Arteon as a halo car, or a showpiece for the capabilities of the brand, Volkswagen has created a sedan that is really a step above the rest of its lineup. Still, the Arteon is reasonably priced for its level of equipment and quality.

The challenge for an Arteon customer has an apt real estate analogy. Real estate investors advise against buying the nicest house in the neighborhood because that means that all the houses around you bring you down by association. The Arteon is the nicest sedan in the VW neighborhood, but it’s always going to be a Volkswagen. That’s what killed the Phaeton and crippled the CC, both great cars that suffer from poor resale value and popularity. Can the Arteon overcome that legacy, and drag the rest of the VW lineup a step closer to luxury?

What's your take on the 2021 Volkswagen Arteon?

Have you driven a 2021 Volkswagen Arteon?
Rank This Car

Enter your zip to see incentives for a new Arteon in your area.

Looking for a Used Arteon in your area?