Looking for a New Toyota Venza in your area? 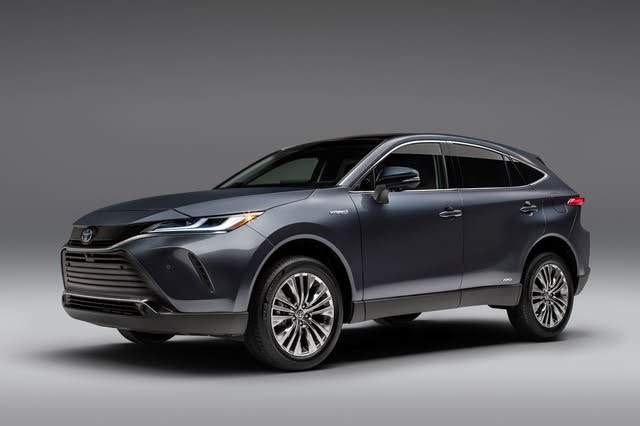 The Toyota Venza returns as a hybrid crossover geared toward budget-conscious empty nesters. It’s designed to be more upscale and fuel-efficient than the Toyota RAV4, giving buyers plenty of reasons to upgrade. 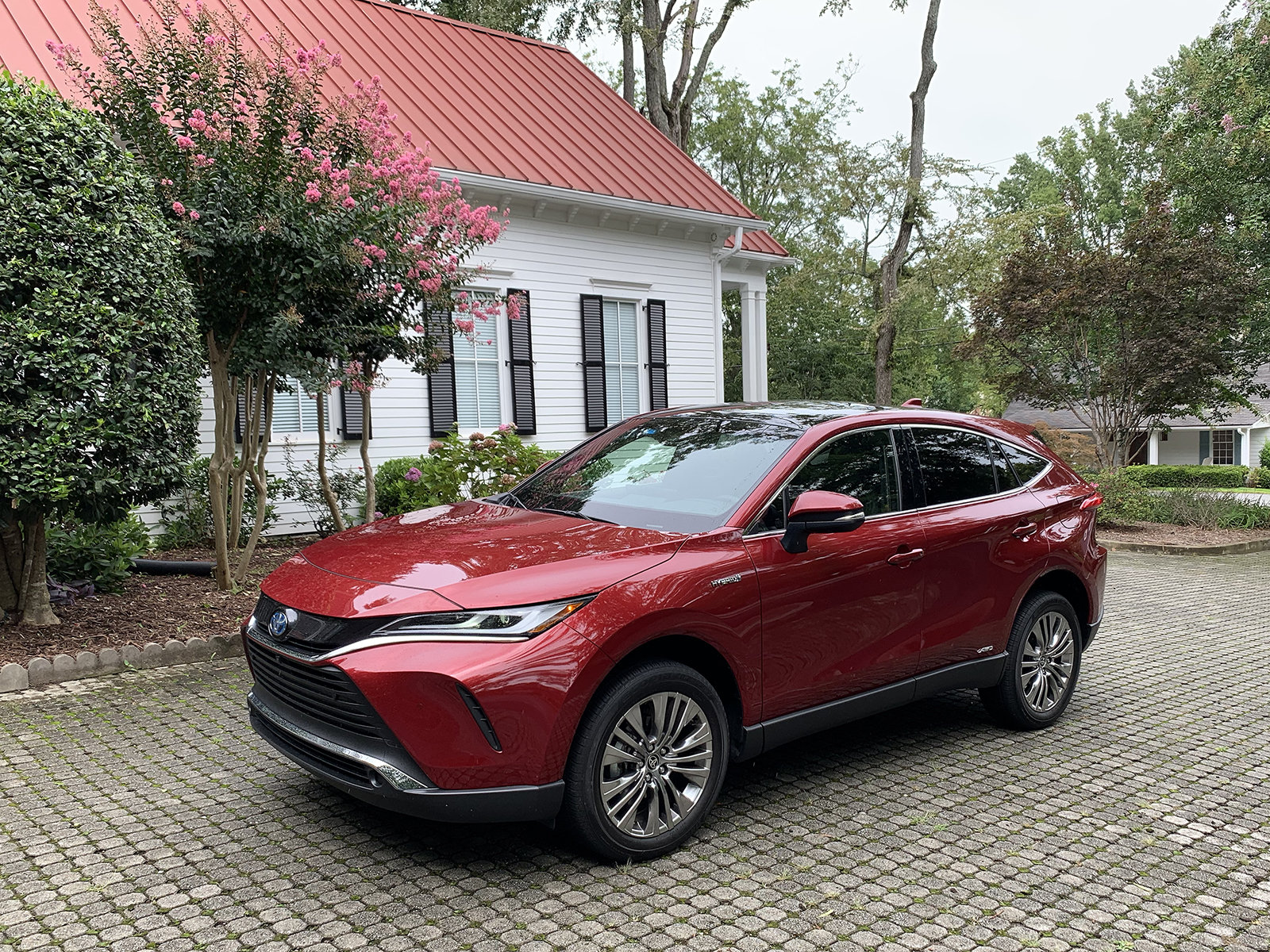 At first glance, the 2021 Toyota Venza looks more like a Lexus than a typical Toyota, which is fitting, because the Venza is anything but typical. The new Venza blends a new approach to in-car technology with fresh exterior and interior design.

Like the Nissan Murano, Honda Passport, Ford Edge, and Chevrolet Blazer, the Venza is a two-row SUV meant to be more sophisticated than the family-friendly Nissan Rogue, Honda CR-V, Chevrolet Equinox, and Toyota RAV4. There is no three-row Venza option.

It also comes only with a hybrid powertrain—for better or worse—something that its competition is lacking. All-wheel drive is also standard. That's also offered by the competition, but only as a costly upgrade.

The Venza’s $32,470 starting price is slightly higher than the Murano and Blazer, but it comes with the traditionally-more-expensive hybrid powertrain. Is the hybrid worth shelling out a little more for? 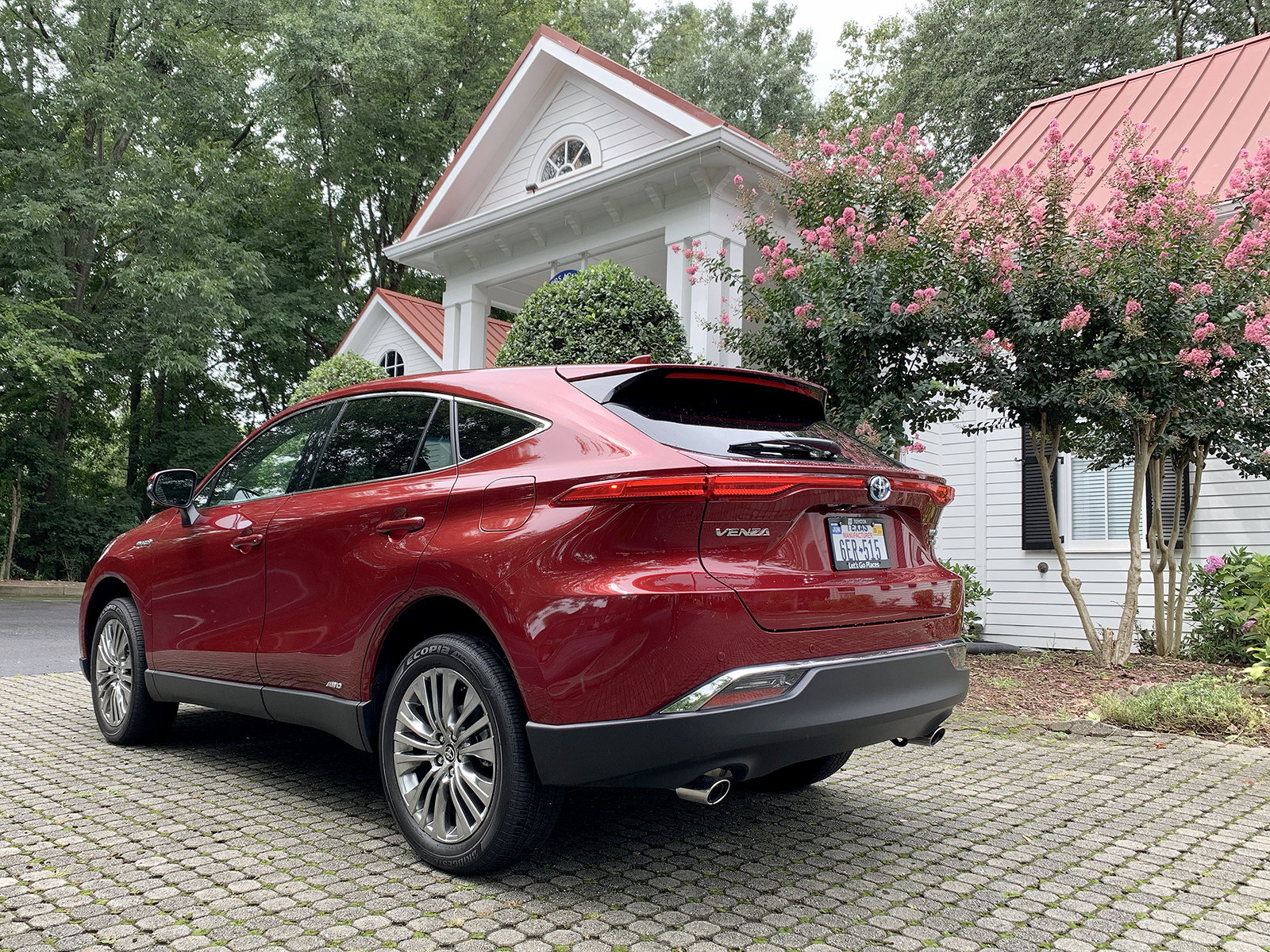 The Toyota Venza is five to six inches shorter than the Toyota RAV4 (depending on trim level) and about one inch closer to the ground, but both models have the same wheelbase.

When it was revealed, many critics said the Venza looked more like a Lexus. This is true, even in person where, from the grille to the elongated profile, it blurs the line between the brands. In this respect, it looks more like the Lexus LF-1 Limitless concept that was first shown at the 2018 North American International Auto Show than any of the SUVs in the Toyota brand’s stable.

Toyota sells the Venza in three trim levels: LE, XLE, and Limited. It comes in the buyer’s choice of seven paint colors, some of which are not available on all trim levels.

There’s also a full suite of standard safety and driver assistance technology, which we’ll cover in the Safety section of this review.

A digital rearview mirror with Homelink, illuminated footwells, a backup camera washer, and a 12.3-inch infotainment screen are standard on the top-tier Venza Limited trim. Buyers can also add the Star Gaze panoramic roof to that trim level, which features electrochromic glazing technology and an element of cool to the SUV.

Our tester was a fully loaded Venza Limited. 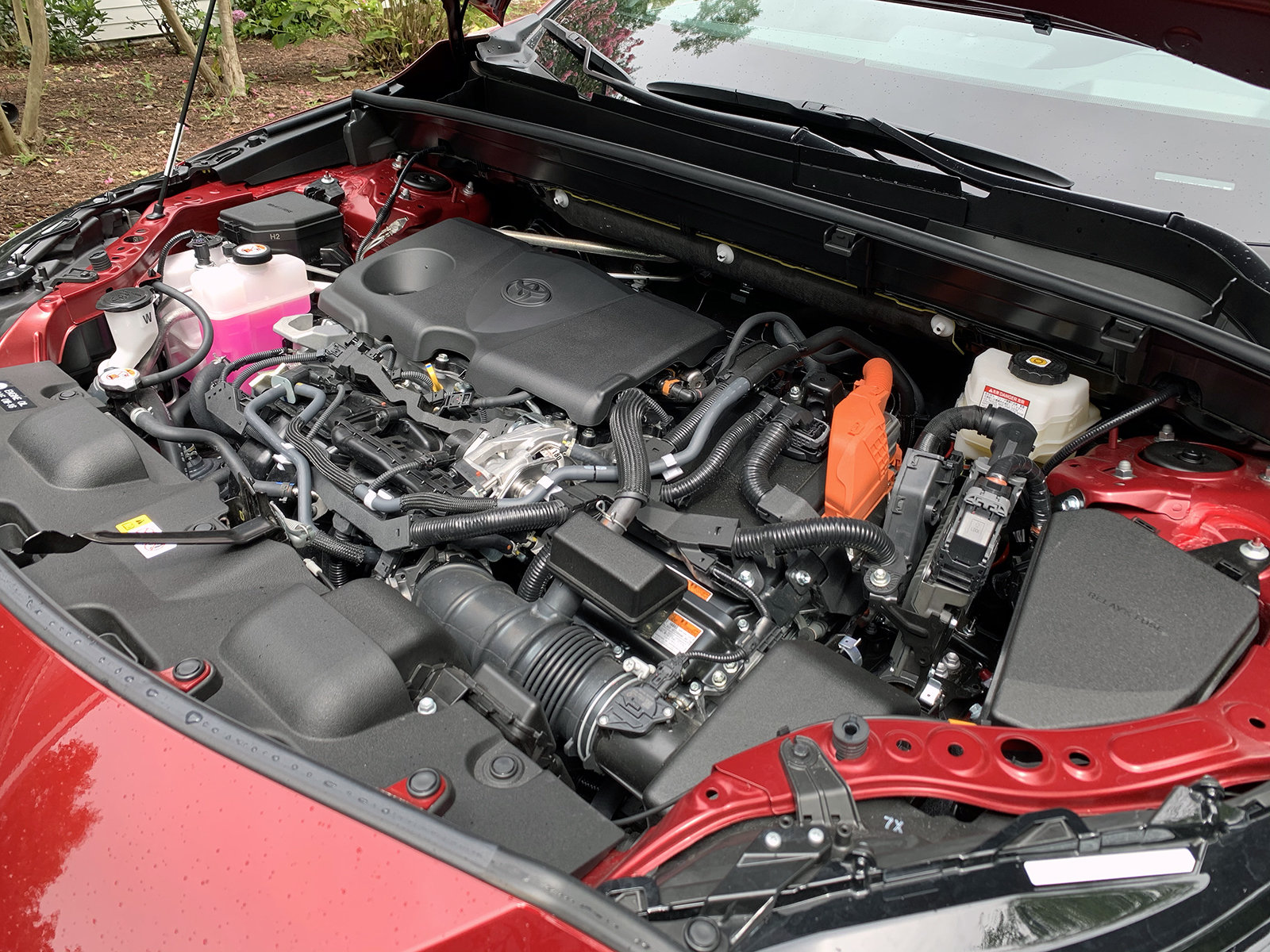 The 2021 Toyota Venza comes standard with a 2.5-liter four-cylinder gasoline engine. The power plant is paired with a lithium-ion battery pack, which powers electric motors that assist the gasoline engine, with what Toyota calls an electronically-controlled continuously-variable transmission (eCVT). A sequential-shifting feature allows the driver to increase the level of regenerative braking, simulating the downshifts of a conventional transmission.

The hybrid system delivers a sufficient 219 horsepower combined and 163 pound-feet of torque. That’s less than what you’ll find from some of the Venza’s competition, but it doesn’t mean the Venza is particularly lacking in power.

Getting the Venza up to speed is a noisy affair. In addition to the noise typically associated with this type of transmission, there is a fair amount of sound from the engine that permeates the cabin. Once up to speed, the noise tempers out and the decibel level returns to a more tolerable amount. Combatting that journey to silence is the road noise that comes through from the eco-conscious tires Toyota installs on the model straight out of the factory.

Acceleration is smooth and, though not rapid, appropriate for the type of driver who will take delivery of the Venza. Power is at the ready when passing at speed and the SUV never fails to live up to expectations.

The Venza’s handling inspires confidence. The all-wheel drive (AWD) SUV goes right where the driver puts it, without much fuss. It sounds like a cop out to say that the Venza drives like a typical Toyota, but it does. Nothing about the experience is out of the ordinary and that’s not a bad thing.

The Venza demolishes the competition when it comes to fuel economy. Neither the Murano, Passport, nor Blazer is anywhere near as fuel-efficient as the Toyota SUV. It achieves an EPA-estimated 40 mpg on the highway, 37 mpg in the city, and 39 mpg combined. That’s about twice as good as the competition when they’re equipped with a similar drivetrain. 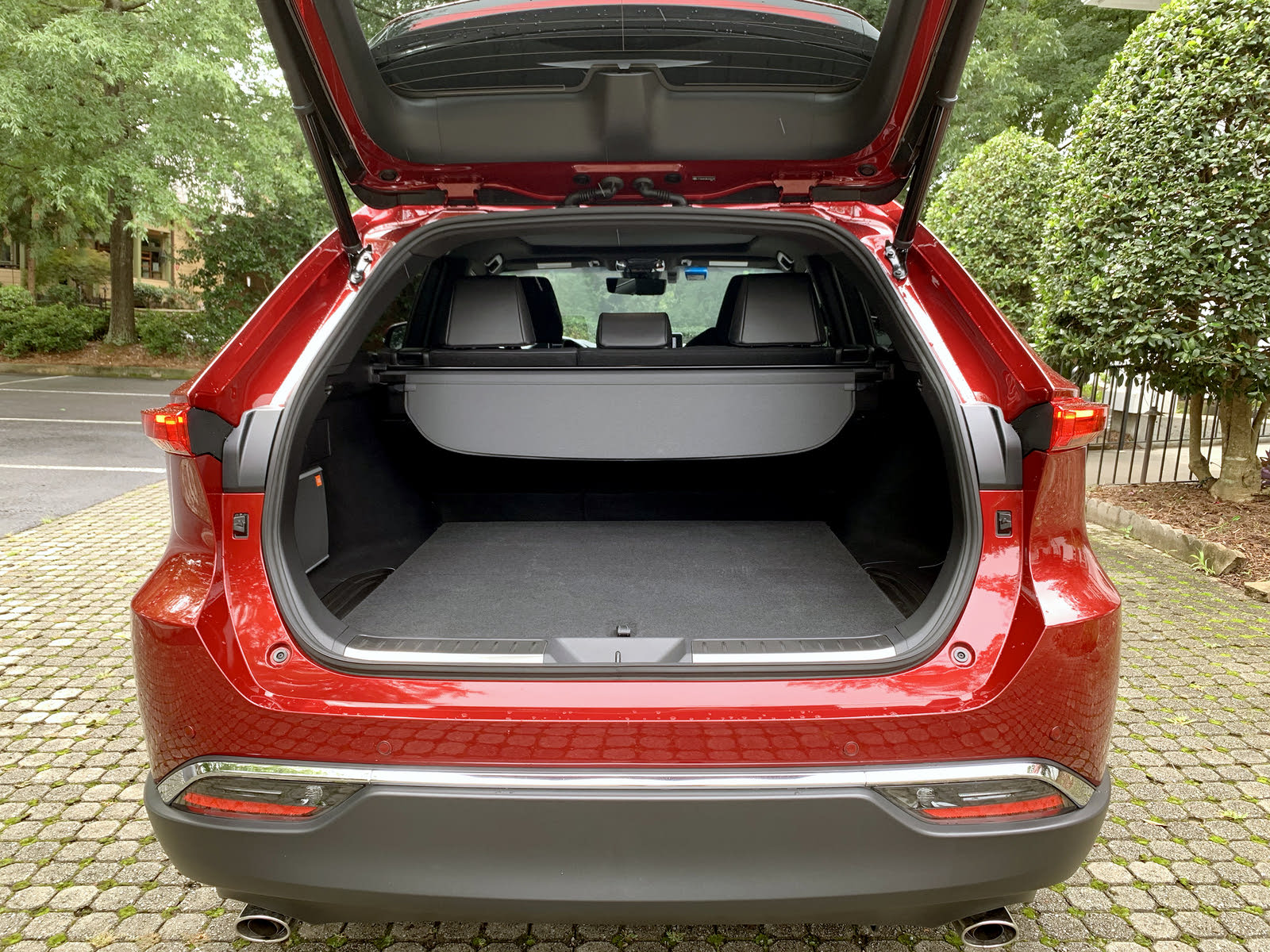 Toyota vehicles are known for their practicality and the Venza is no exception. This model doesn’t have the frills or features you’d expect from a luxury car, but for its price point the lineup is appropriate.

Inside, the Venza looks like neither a Lexus nor a Toyota, taking a wholly unique approach to the cabin’s appearance aside from the parts bin steering wheel, lower dashboard buttons, and driver-information display.

Premium appointments abound in the center stack. Between shapely upholstered vertical elements lined in silver accents, piano black capacitive buttons serve as the SUV’s climate and infotainment system controls. Atop the button panel are subtle vents, which are themselves topped by Venza’s infotainment touch screen.

Up front, the driver and passenger’s seat are plenty accommodating. Two adults can easily fit in the rear of the five-seater and won't mind sitting there for a spell. Both rows of seating are far more comfortable during extended drives than those in the RAV4.

It’s evident that the upmarket Venza isn’t as rough-and-tumble ready as the RAV4, with more elegant appointments and more refined styling.

Compared to the RAV4, the Venza has more headroom, slightly less legroom up front, and nearly equal amounts of shoulder and hip room. Overall passenger volume is nearly the same for both SUVs as well—both models deliver a desirable feeling of spaciousness.

The Venza has around 60 percent of the cargo space of the RAV4, whether with the second-row folded or erect. Still, its maximum 55.1 cubic feet of cargo space is not a small amount. It’s double what you’ll find in the Nissan Kicks, but still less than what is in the Murano, Passport, and Blazer.

While that figure may make those with extended road trips with family in mind immediately write the Venza off, as a daily driver the amount of cargo space never seemed to be an issue during testing.

Arranging the cargo space is easy thanks to quick-flip releases on the 60/40 split-folding rear seatbacks. 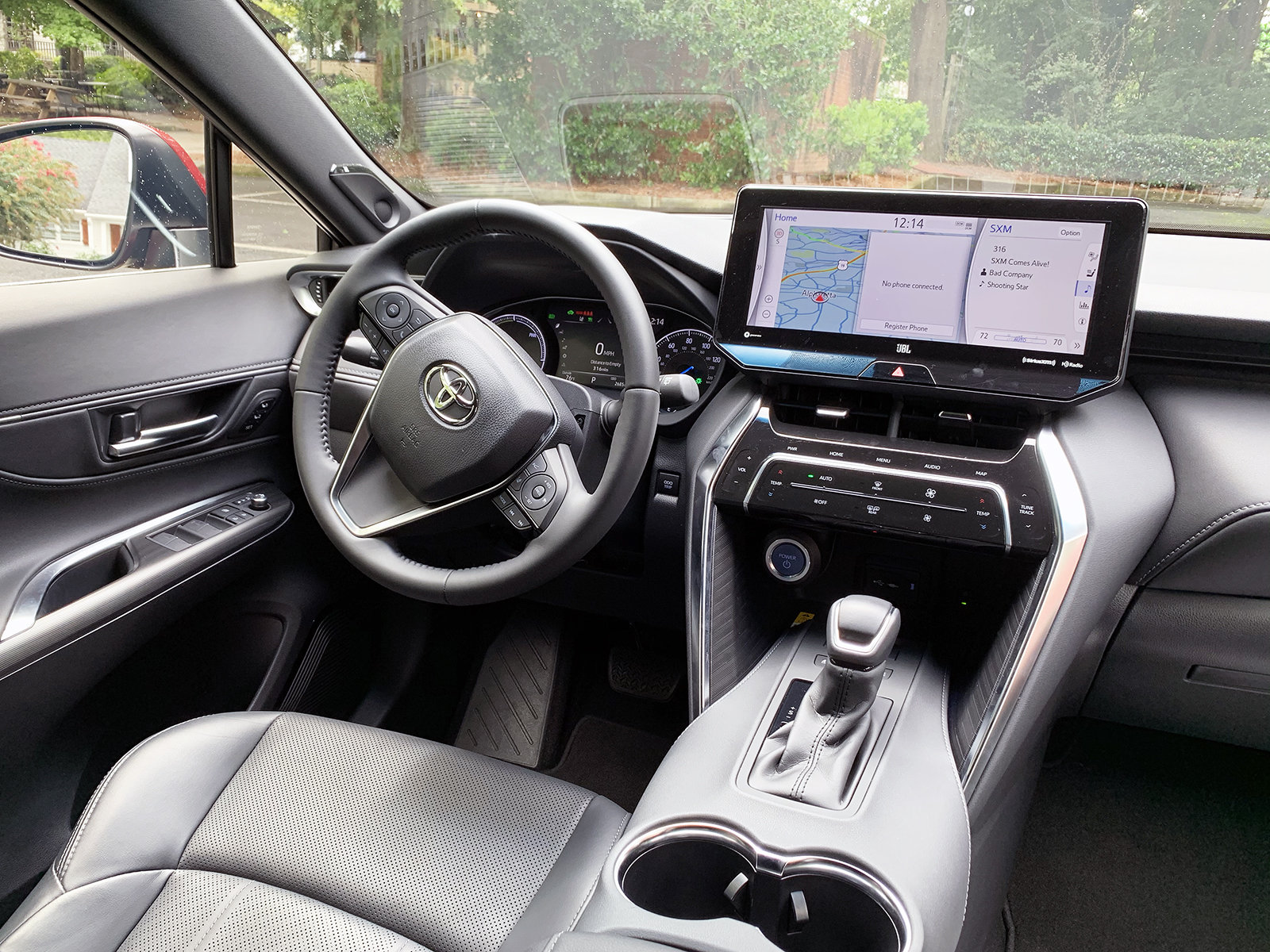 While the response time of the larger screen, as tested, is good and the screen is wide enough to accommodate three separate sections of information, the system isn’t easy to use. Functions that seem like they should only be one or two touches away require multiple menu trips. Expanding screens to get more information about your radio-station choice or see a map is not an easy task. Hyundai has a similarly-sized screen that performs these functions far better.

Toyota recently added Apple CarPlay, Android Auto, and Amazon Alexa to its infotainment lineup—and the Venza gets them all. The technology is standard across the SUV’s trim levels. Additional standard entertainment features include AM/FM/HD Radio, hands-free phone capability, Bluetooth, and a six-speaker audio system.

All trim levels also get a Wi-Fi hot spot that requires a separate contract with a wireless provider to activate beyond the car’s free 2-gigabyte/three-month trial period.

A nine-speaker JBL premium audio system is available in the Venza XLE and standard on the Venza Limited. The system includes a subwoofer and an amplifier.

A number of Toyota connected services are standard on the Venza as well. Toyota equips the model with a one-year trial of Safety Connect, a roadside-assistance service similar to GM’s OnStar, and Remote Connect, an app-based system that allows an owner to access vehicle functionalities from their smartphone. A 10-year trial of Service Connect is standard and provides owners with data regarding maintenance and service to their vehicle.

Dynamic navigation comes on Venza models with the larger infotainment screen. It uses cloud-based technology to provide route guidance that takes into account changing conditions in order to help drivers arrive at their destination in a timely manner. 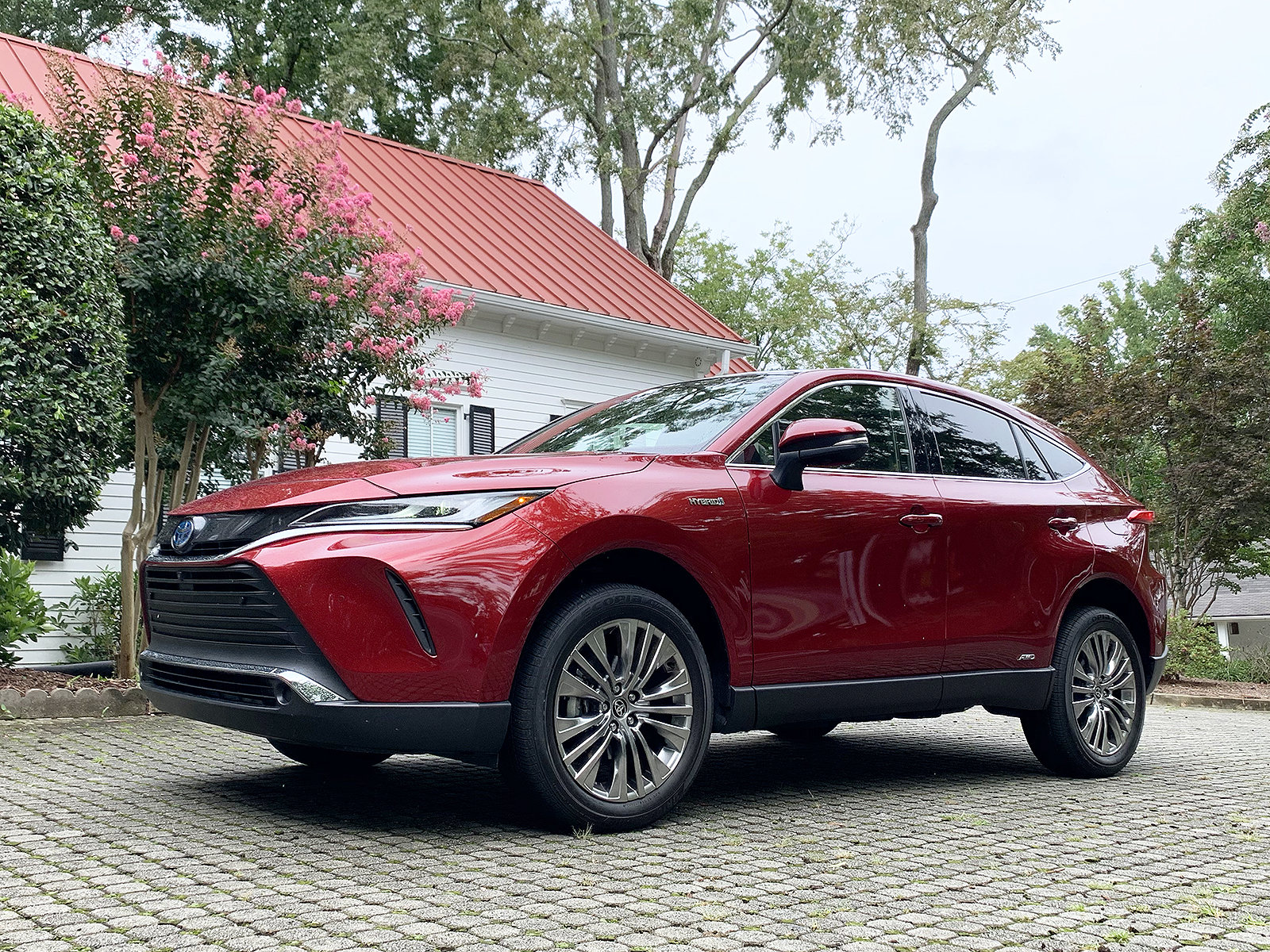 Toyota gives every trim level of the Venza nearly the same safety features. It’s all part of the Toyota Safety Sense 2.0 suite of safety and driver assist technologies.

Buyers get blind-spot monitoring with rear cross-traffic alert standard but can upgrade to similar technology with automatic braking, which is standard in the Venza XLE and Limited.

The Venza has two full sets of LATCH (Lower Anchors and Tethers for CHildren) connections on the rear outboard seats.

The safety and driver-assist features all acted as expected and weren't intrusive. However, the lane-keeping and lane-tracing assists tended to keep the SUV a little further to the right within the lane than systems from other automakers do. That being said, it read the lane lines well (even in construction zones) and didn’t veer from the prescribed path. 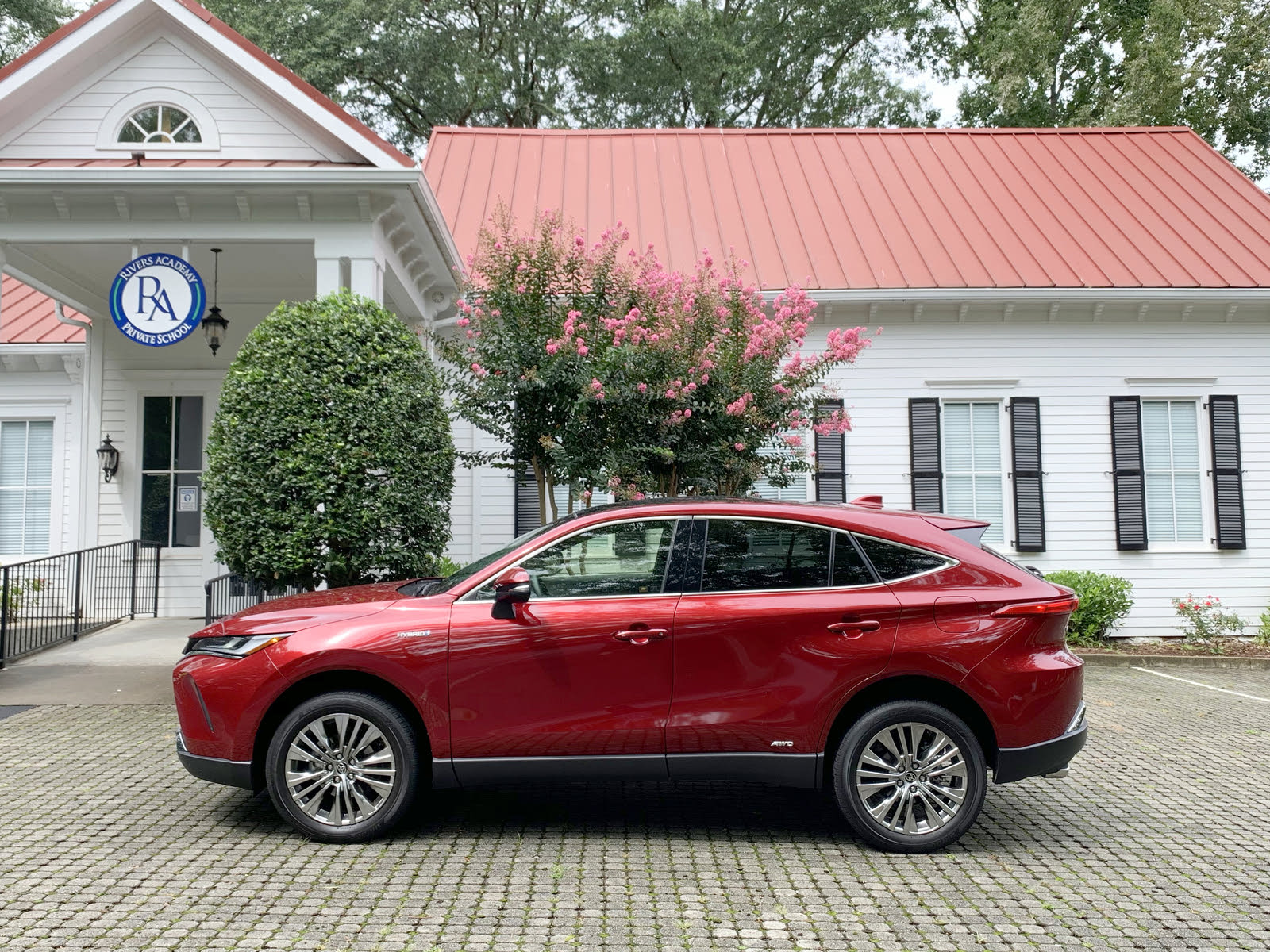 The Toyota Venza starts at $32,470. That’s a little more than its competition, but the Venza does come with a good number of standard features—including key safety technology—that its competition does not. The Venza also has standard AWD and a hybrid powertrain—two items that automakers traditionally charge more for.

Upgrading to the Venza XLE will cost you at least $36,000. The top-tier Venza Limited comes in at $39,800. There aren’t many options boxes to check for this SUV.

Toyota charges a $1,175 destination fee on every Venza.

In both pricing, styling, and size, Toyota has placed the Venza between the RAV4 Hybrid and Highlander Hybrid. It’s a sweet spot, though at first it may not look like it on paper.

It’s hard to think of the Venza as not being a well-priced machine. It delivers on its promises, including impressive fuel economy and a stylish cabin.

When comparing it to the Murano, Passport, and Blazer, the similarly priced Venza outdoes them in many ways. The lowest-priced Murano AWD and Passport AWD are over $33,000 while a similar version of the Blazer starts over $36,000.

Eileen Falkenberg-Hull is the Senior Editor of Autos at Newsweek and the former editor of AutomotiveMap. Her work has appeared in American City Business Journals, Trucks.com, CultureMap, InnovationMap, SportsMap, and U.S. News & World Report. She is also an on-air contributor to the SBNation Radio network.

Thomas Hard to tell from one picture but it looks like the previous generation RX from the a-pillar back. Or maybe a CR-V...or maybe and RDX. Even with one picture, it looks much better than the outgoing Venza.

Have you driven a 2021 Toyota Venza?
Rank This Car

Enter your zip to see incentives for a new Venza in your area.

I Am Trying To Buy Non Leather Steering Wheel In Venza Will Toyota Replace ...

I am trying to buy 2021 Venza xle and want to replace the leather wrapped steering wheel with their usual non leather type. If I call and tell them to order it from the factory will they change it?