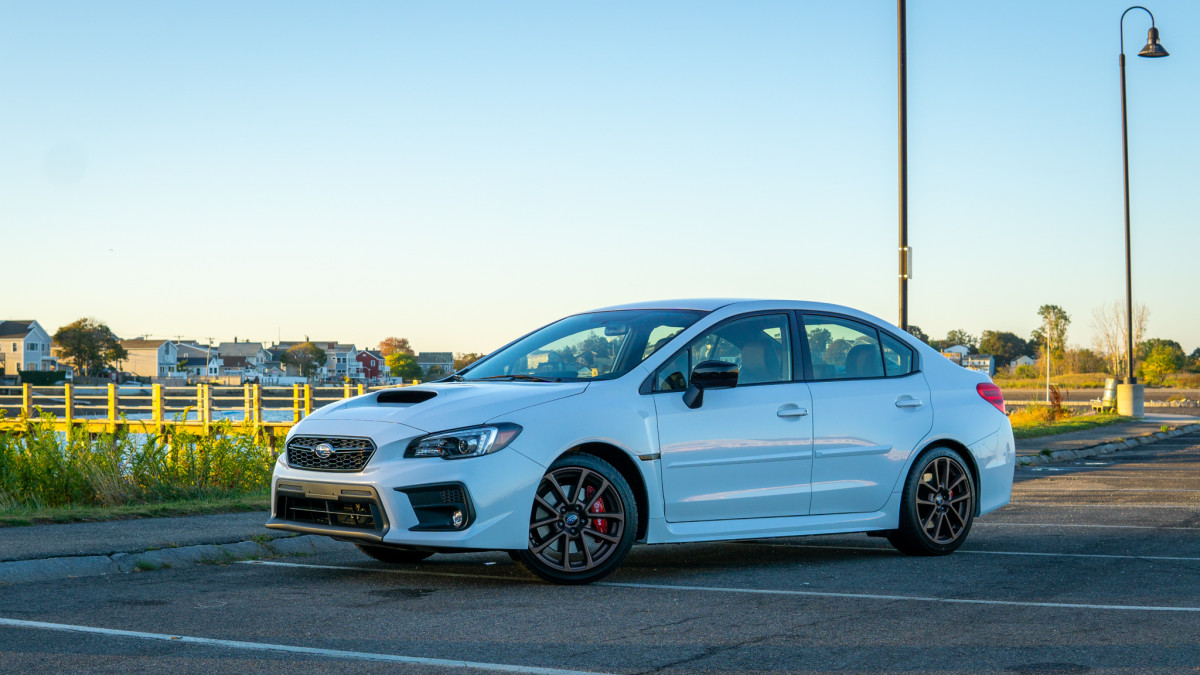 Looking for a New Subaru WRX in your area? 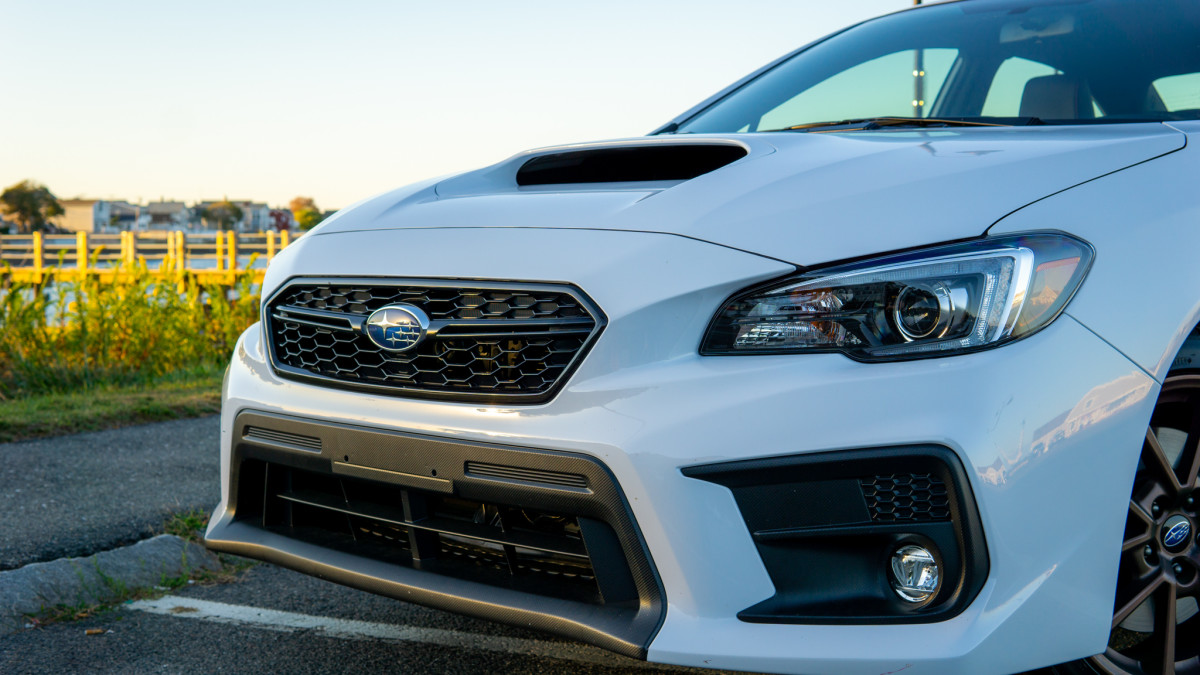 With few exceptions, it’s become harder and harder to find an affordable sports car. Sure, you could get a base-model Mustang or Camaro, but they are cosplaying at being muscle cars. True low-cost, nimble sports cars like the Mazda Miata, Toyota 86, and Subaru BRZ just don’t make as much sense for as many shoppers.

That’s the appeal of hot hatches and sports sedans. Cars like the Volkswagen GTI, Volkswagen Golf R, Honda Civic Si, Honda Civic Type R, Hyundai Veloster N, and the vehicle you see here: the 2021 Subaru WRX. It provides sharp cornering and brisk acceleration, but in a sedan package that makes it more sensible than a true, dedicated sports car.

The WRX is no longer just a hotted-up version of the Subaru Impreza, as it's based on an older version of that compact car. This means many of the same positives, like standard all-wheel drive (AWD), and negatives, such as a low-grade cabin, apply. So is it worth paying the price of a very well-equipped economy car or even a midsize sedan for daily driving enjoyment? Read on to find out. 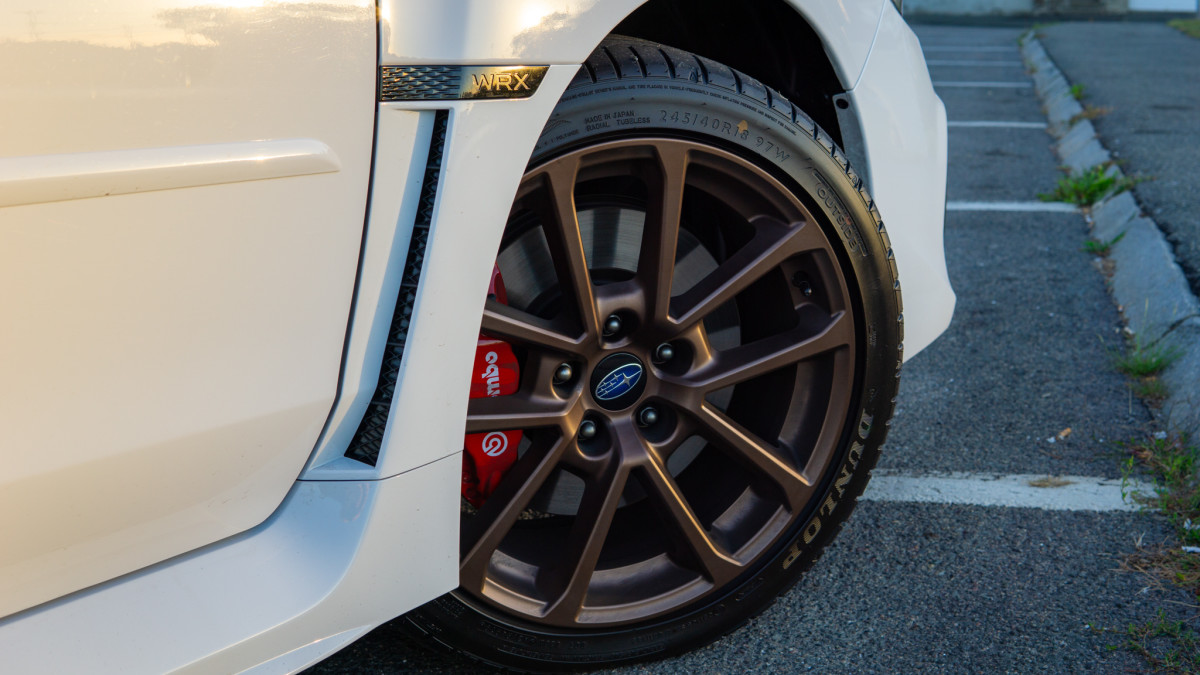 The WRX has often been accused of having too much of an adolescent aesthetic. Within the Subaru family, it’s the one getting the piercings and tattoos. Compared to the racier Subaru WRX STI (which is covered in a separate review), however, the standard WRX looks downright tame. The main difference being the presence of a race-ready rear wing in the STI. Though obviously a sedan, the WRX has a wedge-like front end and a very short trunk lid. This helps give it the appearance of speed, even when at rest. Aerodynamic bodywork and a functional hood scoop help with that.

Inside, the WRX looks like every other Subaru compact car from the past decade. The current generation of the WRX was introduced as a 2015 model, and though the current-generation VW GTI was introduced around the same time, the Volkswagen looks far more fresh, inside and out. The WRX cockpit is function-first, which is great, but it comes at the cost of fit and finish. There are plenty of hard plastics to go around, which contributes to its immature reputation—especially compared to the refined cabins of the GTI and Honda Civic Si.

Moving up to the WRX Premium adds 18-inch wheels, fog lights, heated seats, pushbutton start, auto on/off headlights, and a larger 7-inch infotainment screen. The Premium also opens up the option of an automatic transmission—doing so also unlocks the ability to select the EyeSight suite of driver assistance features.

We drove the range-topping WRX Limited. In addition to leather upholstery, it added a 10-way power-adjustable driver’s seat (power front-passenger seat adjustment isn't available), LED fog lights, and adaptive steering-responsive LED headlights. The Limited is also available with an options package that includes navigation, a premium stereo, and several additional driver-assistance features. For features like a more powerful engine, Brembo brakes, and Recaro front seats, you'll have to upgrade to the WRX STI. 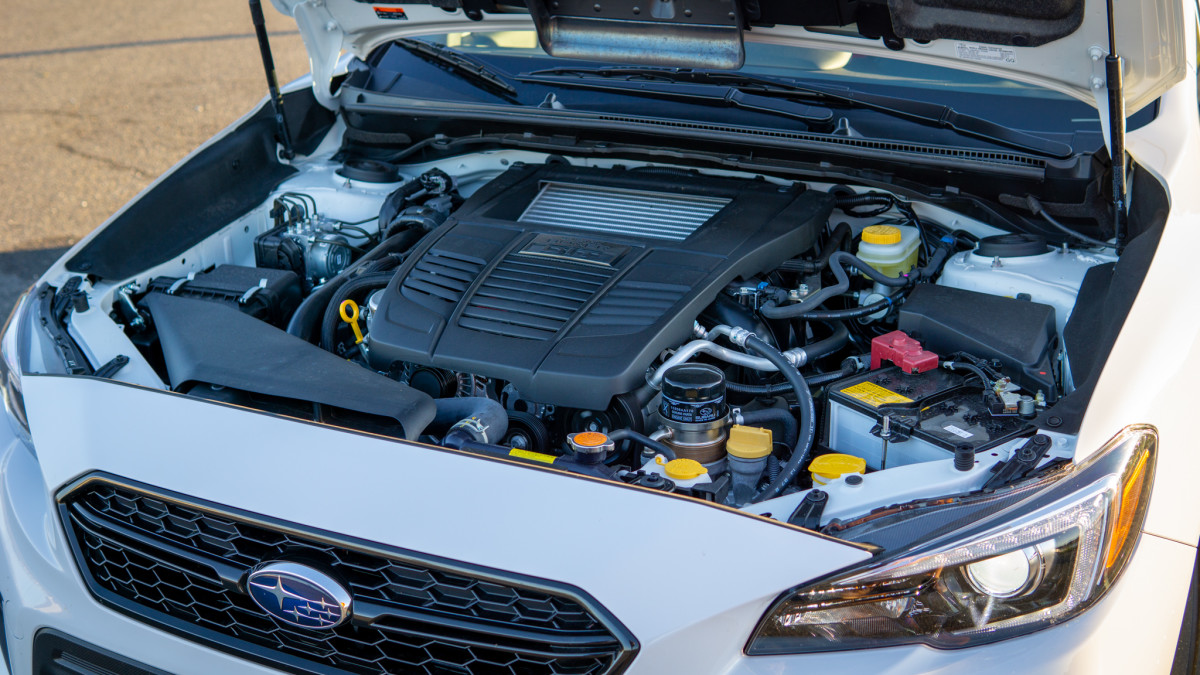 The WRX comes equipped with a turbocharged 2.0-liter four-cylinder boxer engine, so-called because the two banks of two cylinders each lay flat and oppose, or “punch,” at each other. This makes for a balanced engine that can be packaged very low in the engine bay. Or it’s flat enough to package it with an AWD system without significantly increasing the center of gravity. This engine makes 268 horsepower and 258 pound-feet of torque. Buyers can select a six-speed manual transmission or an available continuously variable transmission (CVT).

The rival Civic Si has just 205 hp and the VW GTI has 228 hp. Despite being the most powerful of the lot, you really need to master the revs to get every bit out of the WRX. This is why the use of a CVT for the non-manual option seems so strange. The fact of the matter is Subaru primarily puts CVTs in its cars, so if any brand were to attempt it, this would be the one. Though it’s not the ideal transmission for a driving enthusiast, the CVT and its paddle shifters are able to accurately keep the revs in the powerband.

In fact, between the two, the manual is actually the let down. The clutch feels vague, which is unfortunate, considering how often you have to shift to keep the revs in the ideal range. If you want the manual, move up to the WRX STI, which feels more precise, though still not ideal. The 2019 WRX STI S209 cured that issue, but it was a one-year-only special edition. The S209 had a larger turbo and dozens of performance upgrades, but arguably the most important was the combination of a high-performance clutch and refreshingly mechanical six-speed manual.

The WRX also features Vehicle Dynamics Control with Active Torque Vectoring. This combination modulates torque distribution between front and rear wheels, and applies slight braking on the inside wheels in a corner. This helps the WRX whip around a corner with precision. The WRX has well-weighted steering and makes any winding road a terrific place to be. The downside is the WRX has a stiff ride compared to the Civic Si and GTI, which are able to more seamlessly blend sport and comfort. 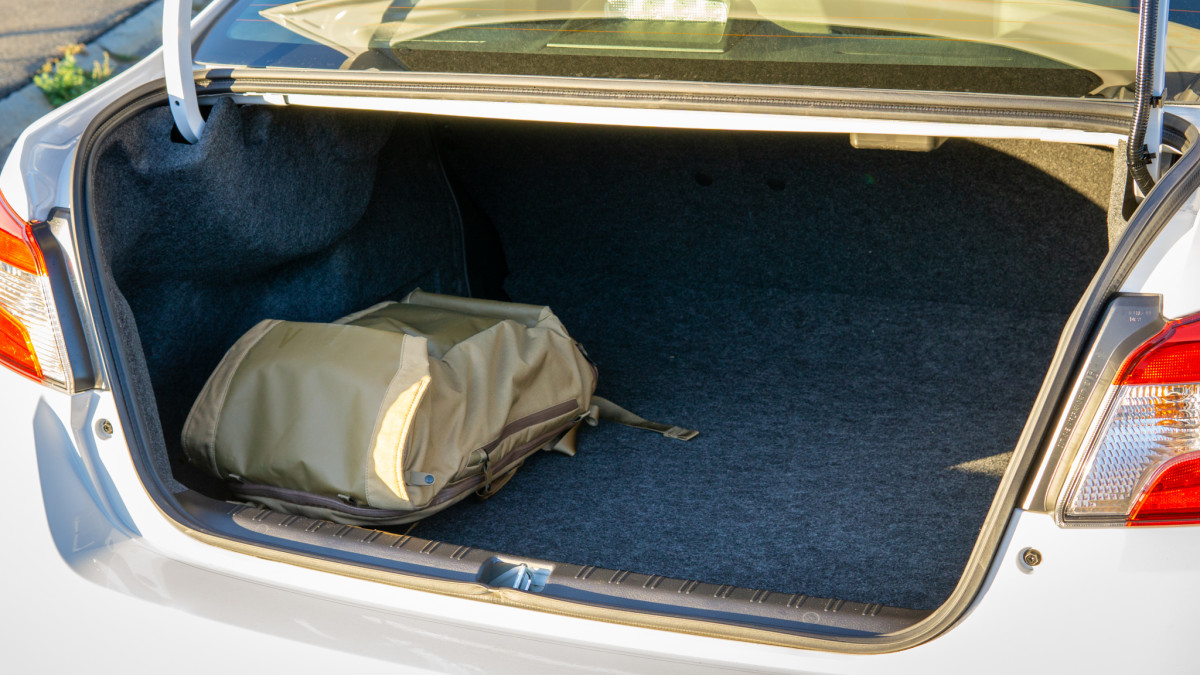 While the WRX benefits from its traditional sedan layout, its age is a bit of a hindrance. Since the mid-2010s, automakers have become more clever with interior packaging. They know folks carry around large water bottles with them, and so in-door bottle-holders have become more accommodating. You simply cannot fit a mid-to-large water bottle in the WRX’s doors. The bottle will fit in the center console cupholders, but may obstruct your shifting motion with the manual transmission.

The WRX provides a commanding but comfortable driving position for a compact sedan. You sit slightly upright and have terrific visibility all around. At the driver’s right hand, there is a decently sized center console tray. Behind the cupholders, a center console compartment provides decent space as well. Speaking of decent space, the rear seats are not too cramped and can accommodate four adults with relative ease. This is where a sedan or hatchback layout shines compared to a coupe or sports car. 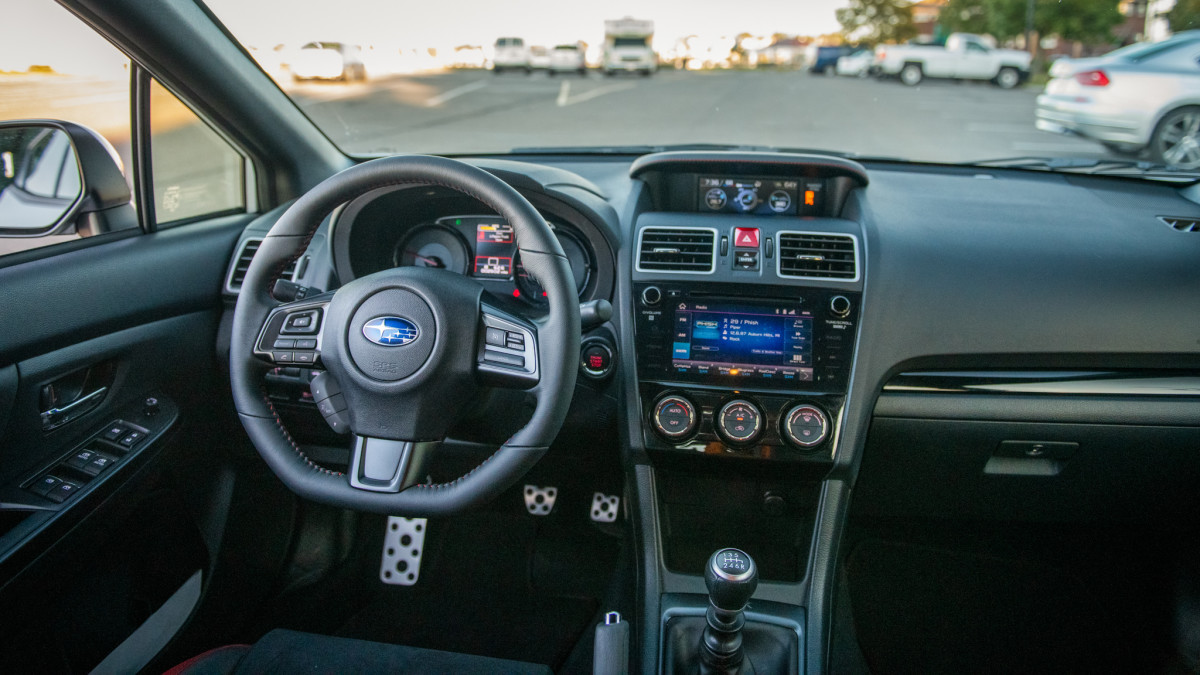 Both screens support Apple CarPlay and Android Auto. Both also have a sensible layout and easy-to-use controls, despite their somewhat dated graphics. In fact, ease-of-use is more important than a flashy screen. Apple CarPlay and Android Auto work well on these screens and don’t share any screen space with any other apps or screens. It does take a few extra keystrokes to get from CarPlay to the desired menu item such as the stereo, but we’ve seen worse.

Our Limited test model came with the available option package that featured navigation and the Harman Kardon premium stereo. The sound system is great for music or talk and provides solid tones. As mentioned before, this generation of the WRX was introduced in 2015. Even with an update along the way to add Apple CarPlay and Android Auto, it’s still far from cutting-edge in-car tech. 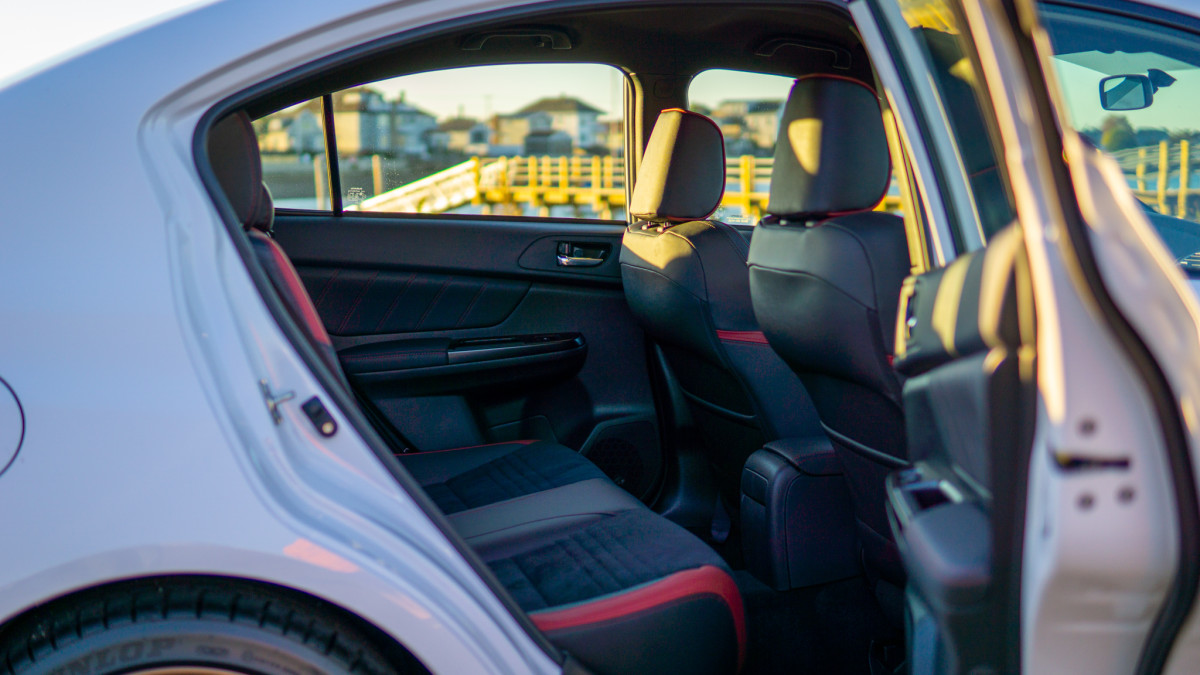 The WRX does not come standard with any of the latest safety features. Subaru's EyeSight system, with adaptive cruise control, emergency automatic braking, and lane-departure warning is available on the Premium and Limited trims, but only if you select the CVT. Thus, we’ve discovered a downside of the manual transmission—you can’t package it with the latest safety tech.

Adaptive high beams, blind-spot monitoring, rear cross-traffic alert, and reverse automatic braking are all options, but only on the range-topping Limited. Every trim of the WRX does come standard with a tire-pressure monitoring system and traction control. 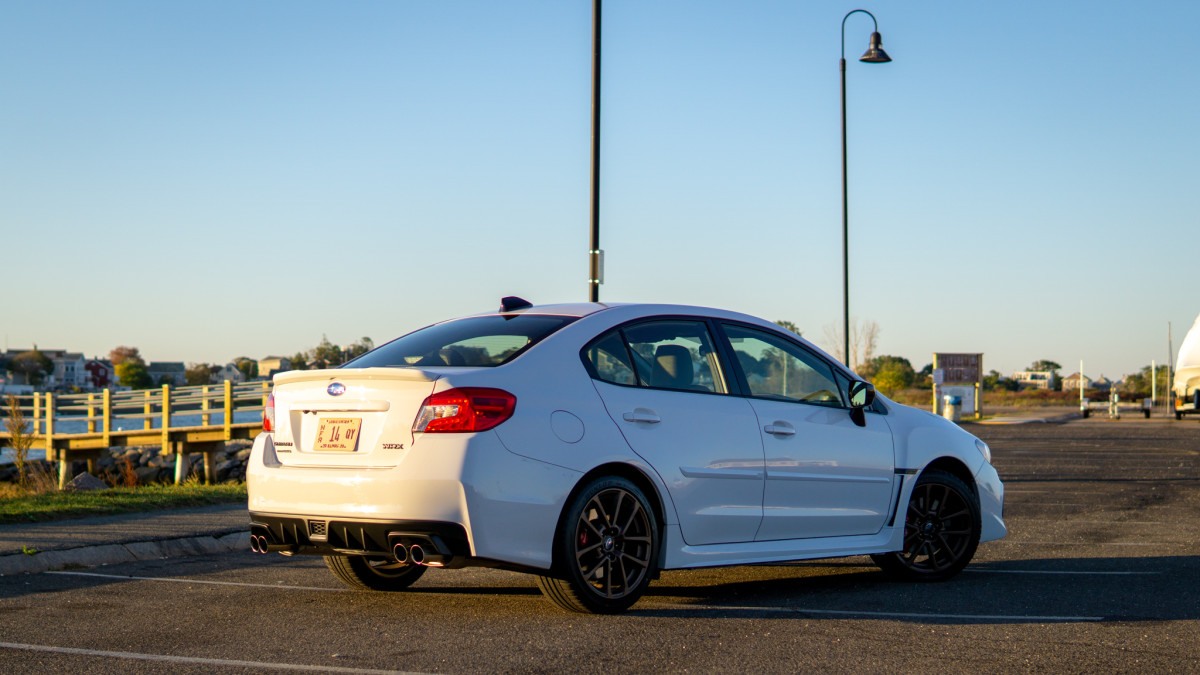 Base MSRP for the 2021 Subaru WRX is $27,495. The WRX Premium trim starts at $30,045 and the Limited starts at $32,095. The CVT is a $1,900 option. Selecting the available EyeSight package will also cost $1,900. For an additional $2,400, you can get an options package with navigation, Harman Kardon premium sound system, blind-spot monitoring, rear cross-traffic alert, reverse automatic braking, and high beam assist. There are also another 78 port-installed accessories (performance or otherwise) you could get from Subaru. So not factoring in those, a WRX Limited with options packages clocks in at a bit over $37,000.

For the price of a well-equipped compact economy sedan, you can have a base-model WRX, or you could get a less-well-equipped compact sedan that has the performance setup to put a smile on your face. The WRX’s pricing allows the consumer to make a decision between comfort or driving engagement. Too often, performance vehicles are prohibitively expensive. Such performance is often associated with luxury, and this and it becomes too expensive for many. Thankfully, the Subaru makes such fun-on-four-wheels accessible.

Of course, the downside is a lack of cabin quality and general day-to-day comfort. Not only is the ride harsher, but the cabin feels more low-rent than most other compact sedans. The only exception to this trend being the Impreza sedan. But for the price of a base-level WRX, you could get a fully loaded Impreza.

Once again, it all comes back to choices. The Civic Si costs less and has a nicer interior, but makes less power. The Volkswagen GTI costs about the same as the WRX, has a much nicer interior, and slightly less power. Where the WRX stands out is its focus on sporty driving at an affordable price, albeit at the cost of comfort.

And that’s just the problem—for about the same money, you can get a Civic Si or GTI that offers a similar driving experience, but are more comfortable and refined. If you’re dead-set on the WRX, this won’t change your mind, but if you want a daily-driver performance car that will actually feel comfortable to drive daily, check out the Civic Si or GTI first.

Have you driven a 2021 Subaru WRX?
Rank This Car

Enter your zip to see incentives for a new WRX in your area.