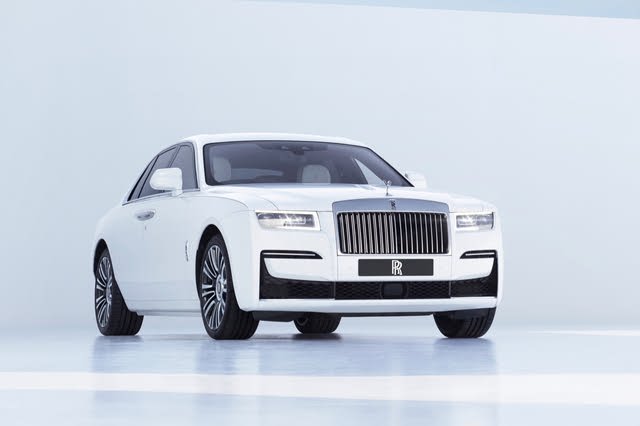 Looking for a New Rolls-Royce Ghost in your area?

For the most part, Rolls-Royce’s history consisted of just one basic sedan at a time, sold in varying lengths. The idea of a second, smaller Rolls-Royce sedan hadn’t been executed in decades—until the Ghost debuted in 2010. Transferring the brand’s styling into a more-driver-focused sedan with relatively ordinary dimensions, the Ghost was an instant success. It’s a success that Rolls-Royce is keen to repeat with the all-new 2021 Ghost.

As before, the Ghost comes in Standard and Extended variants, the latter sporting a wheelbase that’s 6.7 inches longer than the former. From the outside, the redesigned Ghost draws clear inspiration from its predecessor, and from other Rolls-Royce sedans of late, but there’s something different about it. A lot of the more ostentatious details have been simplified, for a look that Rolls-Royce calls “Post Opulent.”

The same simplicity applies to the Ghost’s interior, whose formerly complicated dashboard has been distilled to a single piece with wide flanks of solid wood, leather, and glass, and relatively few controls and details. Nevertheless, Rolls-Royce employed considerable techniques, like double-skinned structure sections and more than 220 pounds of acoustic-dampening materials, to make the cabin quieter and more serene than ever before.

Mechanically, the Ghost relies upon a new twin-turbocharged 6.75-liter V12 engine. While this unit is shared with Rolls-Royce’s other cars, this iteration was specially tuned for the Ghost, where it develops 563 horsepower and 627 pound-feet of torque. That’s enough to hit 60 mph in 4.6 seconds, which is impressive for such a heavy car. For the first time, the car gets both all-wheel drive (AWD), all-wheel steering, and a 50/50 front/rear weight distribution. Air suspension and a damper unit on each front upper wishbone combine with cameras and GPS topography data read the road ahead and filter out as many road surface imperfections as possible.

Technology and features are aplenty in the new Ghost, consisting of everything from self-closing doors at all four corners, to 20 LEDs that subtly illuminate the grille vanes, to all manner of open-pore wood veneers, to a nameplate that’s lit up by more than 850 simulated stars. A WiFi hotspot, a touchscreen infotainment system with Apple CarPlay and Android Auto connectivity, and an 18-speaker, 1,300-watt stereo system are also onboard.

Rolls-Royce also makes up for the previous Ghost’s lack of safety features. Forward-collision warning, automatic emergency braking, lane-departure warning, lane-keeping assist, adaptive cruise control, semi-autonomous driving, night vision, automatic high-beams, and a rear-view camera are all on board. That said, don’t hold your breath on any crash-testing data, as it’s unusual for cars at this price point to be evaluated in that arena.

The exciting new Rolls-Royce Ghost opens up brand-new worlds of comfort, performance, and luxury for those fortunate enough to buy one.

What's your take on the 2021 Rolls-Royce Ghost?

Have you driven a 2021 Rolls-Royce Ghost?
Rank This Car

Enter your zip to see incentives for a new Ghost in your area.