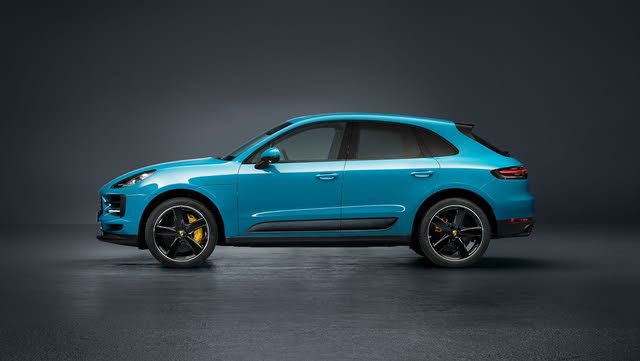 Looking for a New Porsche Macan in your area?

If you’re in the market for a high-performance car but need enough space for a couple of kids and maybe some luggage, then it’s hard to do worse than a 2021 Porsche Macan. One of the most athletic vehicles in its segment, the Macan heads into 2021 with almost no changes, save for the inclusion of Apple CarPlay on the car’s list of standard features.

Porsche sells the Macan in four trims. You could opt for a base-spec Macan, but then you’d also be living with a four-cylinder engine in a car that really deserves a six. Luckily, the mid-level S trim gives it just that, and the GTS pumps that six-cylinder up even further. At the top of the range is the Macan Turbo, a true performance SUV in every right.

As intimated, the base Macan employs a 2.0-liter four-cylinder engine. It makes 248 horsepower and 273 pound-feet of torque, managed by a seven-speed dual-clutch automatic transmission (DCT) and routed to all-wheel drive (AWD). Move up to the S trim, and Porsche packs in a 3.0-liter V6 good for 348 hp and 354 lb-ft of torque. The GTS downsized the engine displacement to 2.9 liters but increases power to 375 hp and 383 lb-ft. The Turbo models’ version of the 2.9-liter V6 delivers 434 hp and 405 lb-ft. Like the base model, the S, GTS, and Turbo all employ the same seven-speed DCT and AWD.

Porsche offers plenty of creature comforts in the Macan but most of them are optional. Only the standard power-adjustable seats feel worthy of the Porsche badge. If you want to fill your Macan with leather trimming and sumptuous upholstery, expect to pay for it. Cargo space is also light at 17.6 cubic feet, and there’s not a ton of storage space for small items in the cabin.

Technology is more of the same story. Apple CarPlay now comes standard in 2021, but most of the company’s note-worthy tech features are offered only at an additional cost. For a vehicle that starts north of $50,000, we’d expect niceties like wireless phone charging to be standard. It isn’t.

Neither the Insurance Institute for Highway Safety (IIHS) nor the National Highway Traffic Safety Administration (NHTSA) has crash-tested the Macan. Lane-departure warning comes standard, but pretty much all the other advanced driver assistance systems (ADAS), including automatic emergency braking, cost extra.

Without a doubt, the Porsche Macan is a terrific performer, but turning it into a luxury car costs serious money. Prices start at $52,100 for a base model, while the Macan Turbo starts at $84,600. With Porsche’s long list of options, those prices can rise fast.

Have you driven a 2021 Porsche Macan?
Rank This Car

Enter your zip to see incentives for a new Macan in your area.