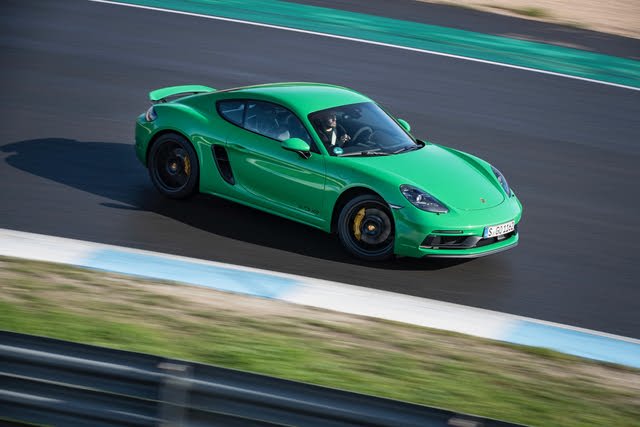 Looking for a New Porsche 718 Cayman in your area?

The Porsche Cayman is part of a generation that made its debut for the 2017 model year. This year, the Cayman gets new standard features and a new transmission option for some trims. The Cayman rivals luxury sports car models like the Audi R8, Lexus LC, Chevy Corvette, and Porsche’s own Boxster and 911.

The Cayman was introduced as a base coupe variant of the popular Boxster sport convertible, and as such, it features Porsche’s characteristic styling throughout. Options include the SportDesign package with a unique front and rear fascia and numerous wheel design choices.

There are five trims for 2021: Cayman, Cayman T, Cayman S, Cayman GTS 4.0, and Cayman GT4. The base Cayman gets a 2.0-liter turbocharged flat-four engine rated for 300 horsepower. The Cayman T adds performance upgrades like a sport suspension, launch control, and a lap timer. The Cayman S features a 2.5-liter turbocharged flat-four engine good for 350 hp. With the GTS 4.0, you get a flat-six rated for 394 hp plus the Sport Chrono Package and an active suspension system, and the GT4 also gets a flat-six, this one rated for 414 hp. Every Cayman gets rear-wheel drive (RWD) and the choice of a six-speed manual or seven-speed dual-clutch automatic PDK transmission.

The Cayman gets a standard reversing camera and front and rear parking sensors. Adaptive cruise control, lane-change assist, and blind-spot monitoring are optional.

The 2021 Porsche Cayman’s new features and updates help it stay relevant in an increasingly competitive segment.

Enter your zip to see incentives for a new 718 Cayman in your area.

Looking for a Used 718 Cayman in your area?