Looking for a New Nissan Kicks in your area?

Nissan has refreshed the Kicks for the 2021 model year, giving it more features and making it an even better budget-friendly crossover. 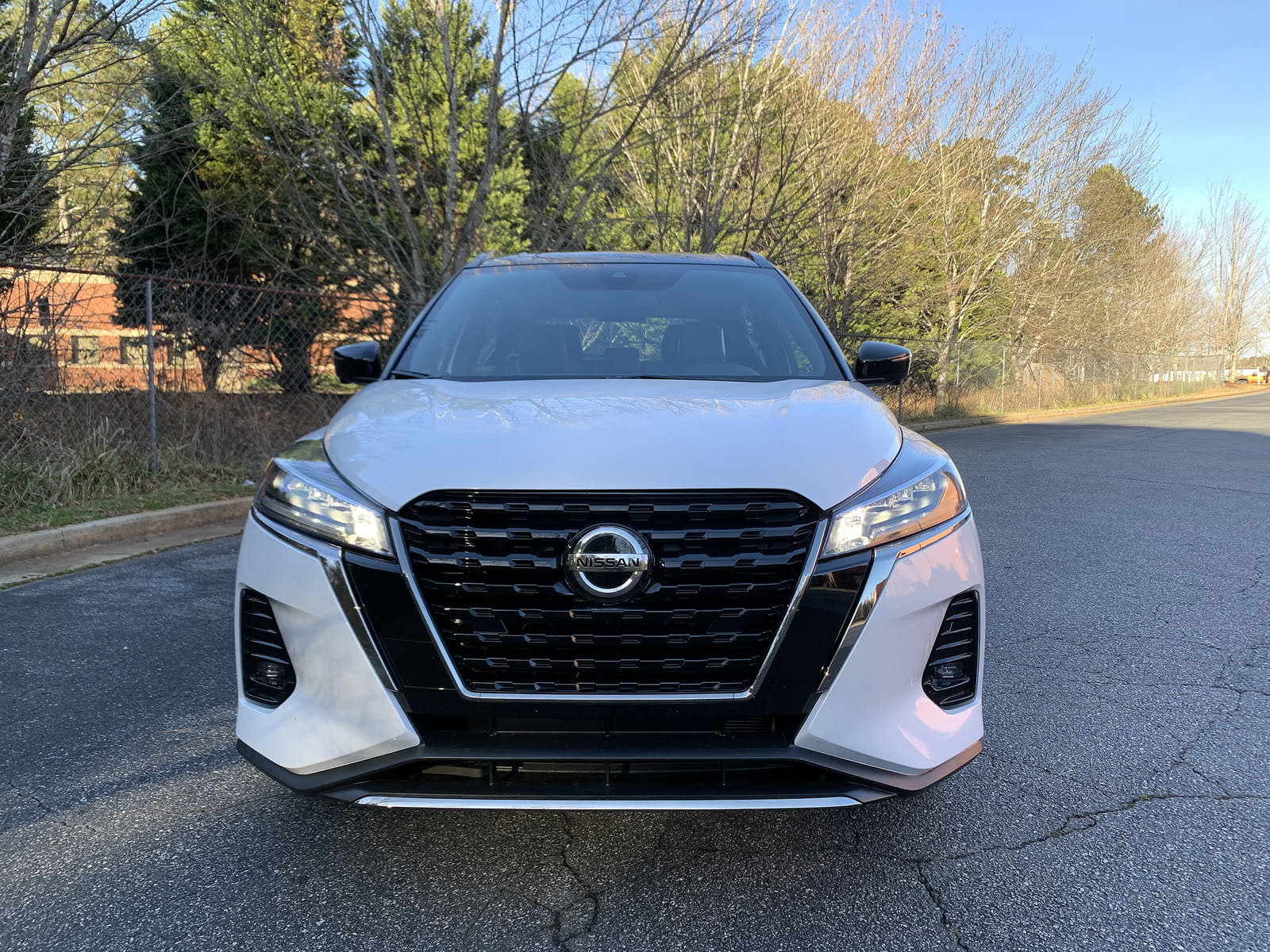 It’s been only three years since the Nissan Kicks made its way to America, but it’s been available across the globe for longer. Originally designed as a cute get-around that looked good from the sidewalk to passersby while delivering just enough power, the refreshed 2021 Kicks continues to check those boxes, now with more features. 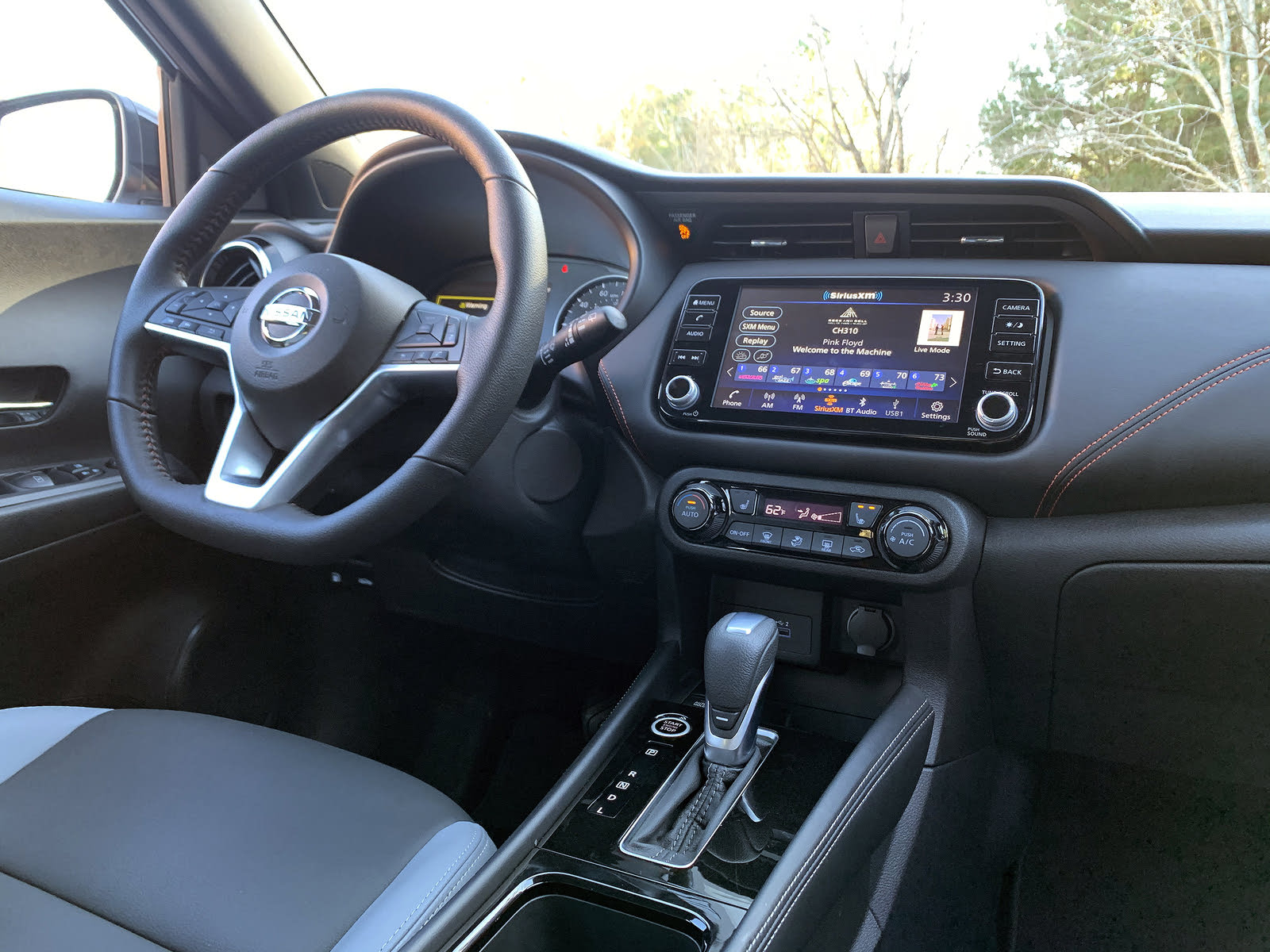 The biggest changes to the Nissan Kicks for the 2021 model year are on the outside. At its face is a bolder design that’s more in-line with the new face of the 2021 Nissan Armada, forthcoming Nissan Ariya, and 2021 Nissan Rogue.

The nose is snubbed but not blunt while a deep V-motion design is prevalent, with a new “double V-motion” feature that pairs the sweeping chrome piece with piano black underneath. Unlike the Rogue, the Kicks wears the old Nissan logo on the front and back.

Thinner, longer headlights extend most of the way down the face of the subcompact 2021 Nissan Kicks. The automaker has given the top-tier Kicks SR trim level LED multi-reflector headlights and standard LED fog lights. Intelligent Auto Headlights (automatic high beams) with adjustable sensitivity and timing and a rear windscreen wiper are standard.

At the SUV’s back are a new bumper, back door finisher, and LED taillight combination. The look, which is better in some colors than others, gives the Kicks a real sense of proportion that’s very Nissan Leaf-like, emphasizing the Kicks’ generous posterior. It is here that the least premium part of the Kicks resides. The piece of body that covers the trunk release, rearview camera, and license plate lights appears like an afterthought that’s been glued on.

As it had for the 2018, 2019, and 2020 model years, the 2021 Kicks features a two-tone paint job option with the SUV’s floating roof tinted Super Black. The two-tone combination is available with every body color except Fresh Powder, Gun Metallic, and Super Black (with Super Black, the roof would already be painted Super Black).

Models with this two-tone paint job take full advantage of the upmarket look of the Kicks with the large windscreen wrapping around the front blending nearly seamlessly into the A-pillar while the black C-pillar is nearly hidden by a high-rising body panel in combination with the rearward sloping roof. The look is completed by the wraparound design of the rear glass.

The overall design emphasizes the greenhouse of the car while making a bolder statement. The Kicks no longer looks like just a miniature Nissan. It has style and substance that, though familiar, is its own.

The Kicks SR, which is the grade our test car came in, has LED headlights, LED light signature accents, LED fog lights, black heated outside mirrors with integrated turn signals, front and rear bumpers with body-color inserts, a rear roof-mounted spoiler, and dark chrome grille accents which lend themselves to a sportier aesthetic. A leather-wrapped steering wheel and shift knob are also standard in the model.

Buyers who wish to customize their Kicks further can choose from over 100 million available color combinations that incorporate Nissan Kicks Color Studio accessories from the company’s catalog. Roof rails, heated outside mirrors with integrated turn signals, and a rear roof spoiler are available.

The interior styling of the Kicks remains mostly the same as in previous years but is filled with higher quality materials. Here, the model takes a note from the 2020 Nissan Sentra, which punches above the weight of its price tag, and has materials that are at least as nice as what you'll find in a BMW X1.

Highlights of the interior redo also include new seat and door designs and a full center console armrest in the mid-range Kicks SV and Kicks SR. Models equipped with the new seating materials have more saturated color. Opt for the Kicks SR Premium Package and get Prima-Tex-appointed seating with three-tone design and stitching. 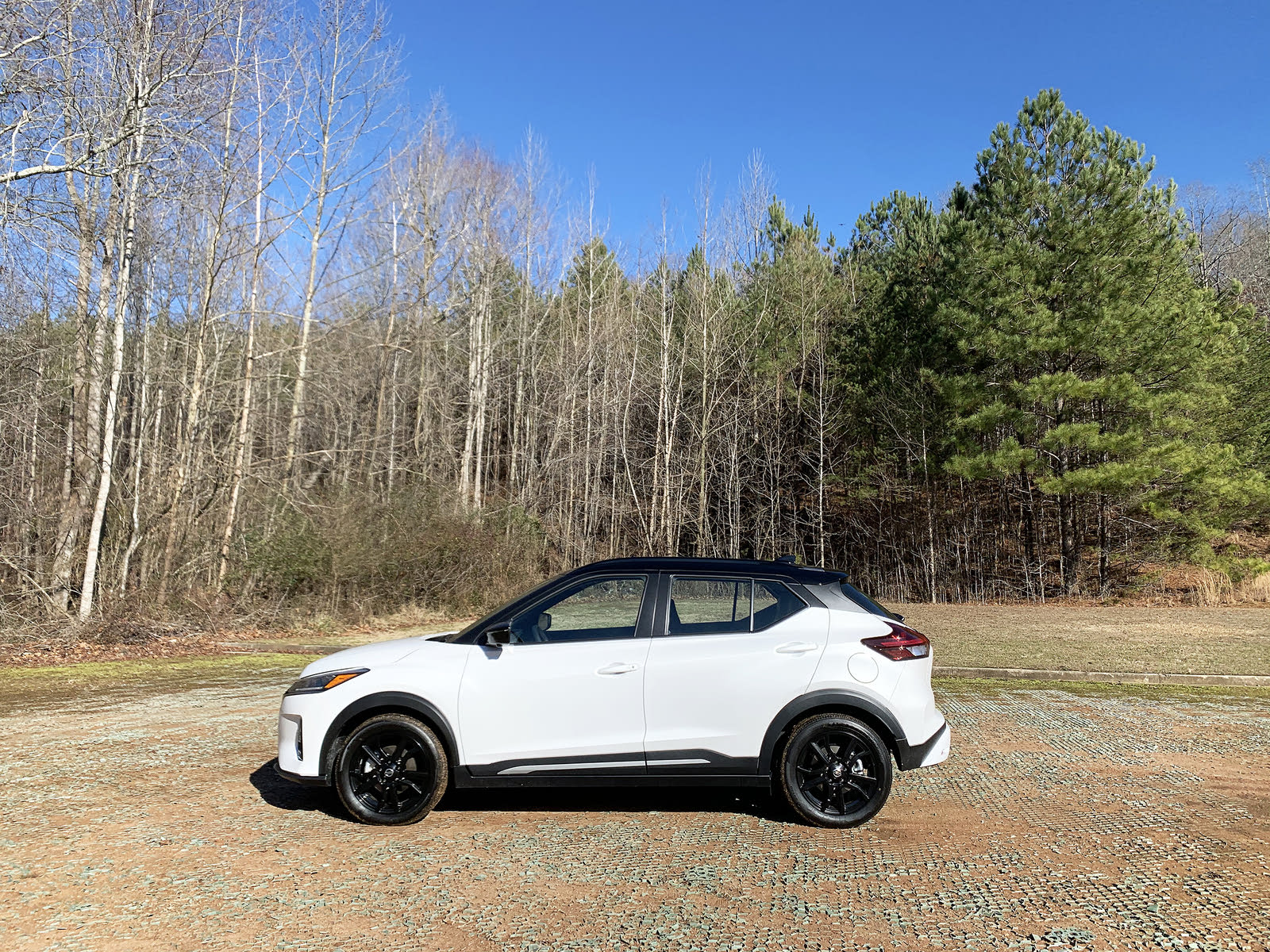 Only one powertrain is available for the Kicks. Every 2021 model comes standard with a 1.6-liter four-cylinder engine that is rated to provide 122 horsepower and 114 pound-feet of torque. This is the same engine that is in the Nissan Versa, delivering the same power figures but with slightly varied gear ratios. As in the Versa, in the Kicks it is paired with Nissan’s Xtronic continuously variable transmission (CVT) and front-wheel drive (FWD). All-wheel drive (AWD) is not available.

The car’s electric power-assisted steering with vehicle-speed variable assist helps make the Kicks feel nimble whether navigating along the highway, winding country roads, or in the tight quarters of a city. Putting the Kicks in a traditional parking space is a near-thoughtless exercise while parallel parking is greatly aided by the size of the vehicle and the standard rearview camera.

Many describe the Kicks as being low-powered and looking at its figures it's easy to see why. Nissan has given the SUV a good power-to-weight ratio meaning that the Kicks has enough power for its size without being zippy. The Kicks' get up and go is similar to what other models in its class offer.

Despite being FWD, the Kicks SR tester maintained its good nature on icy roads. Little engine noise passes into the cabin, but the CVT can get noisy when heading uphill and under heavy acceleration, as the mechanics try to find the right torque balance. This is a feature of many CVTs and shouldn't move the Kicks out of consideration.

Nissan has the Kicks S trim ride on standard 16-inch steel wheels while the SV and SR trim levels get 17-inch aluminum-alloy wheels. Buyers can choose to upgrade to 17-inch black alloy wheels on Kicks SV and SR for an additional fee. All Kicks models come from the factory with all-season tires.

The Kicks also comes standard with a traction control system, a stability control system, and hill start assist. Those are pretty standard across the industry in cars, crossovers, and SUVs these days. It also has standard auto-hold, which allows drivers to come to a complete stop, remove their foot from the brake, and have the vehicle stay put until a significant amount of pressure is put on the accelerator.

The base model Kicks S comes with a front disc/rear drum antilock braking system while the Kicks SV and SR get new rear disc brakes for improved stopping power over the last model year.

The U.S. Environmental Protection Agency (EPA) has rated the fuel economy of the Kicks at 31 mpg in the city, 36 mpg on the highway, and 33 mpg combined rating making it one of the most fuel-efficient subcompact crossovers you can buy. It has 356 miles of range on a single tank of gas. 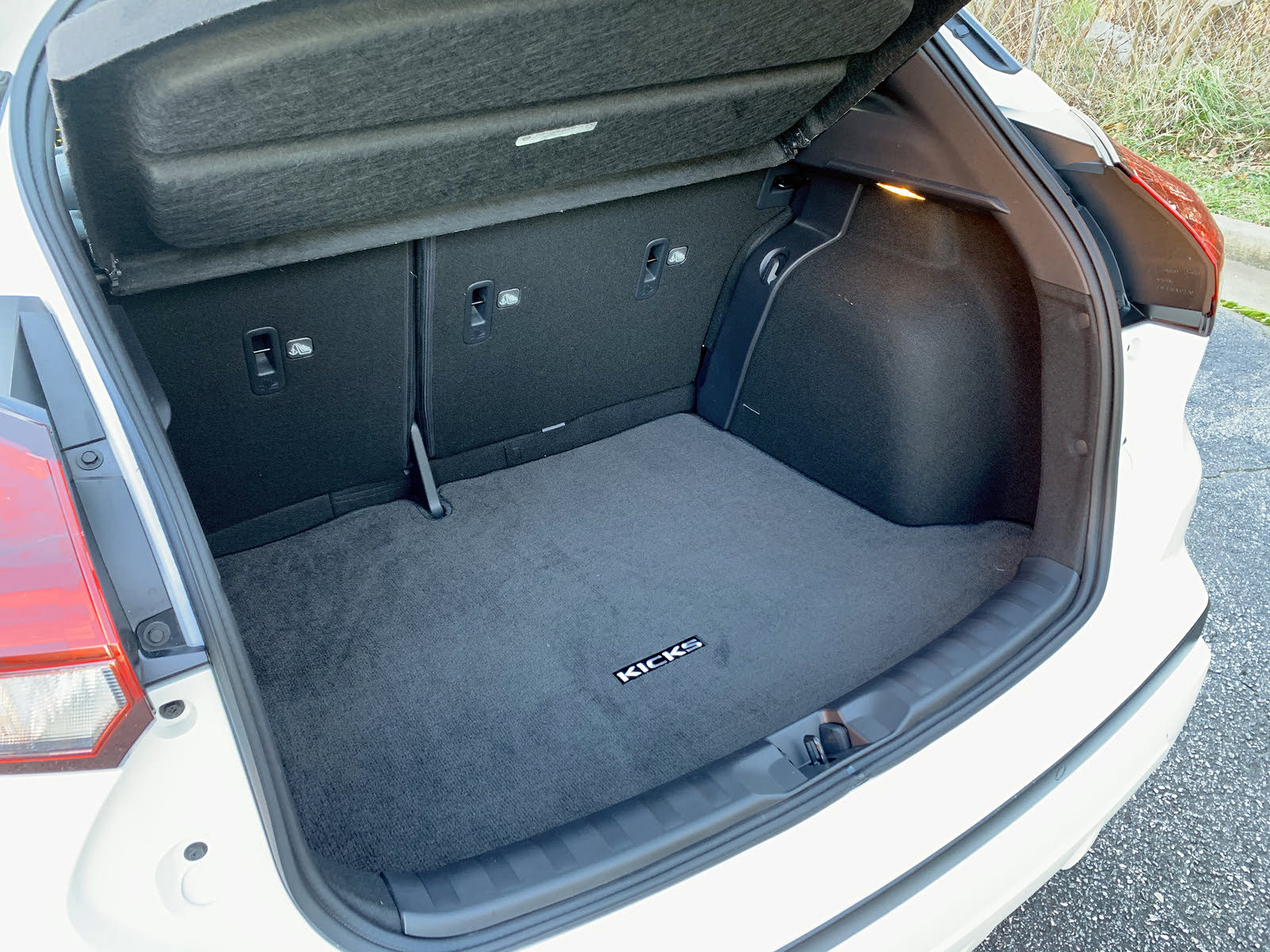 The small size of the Kicks translates into easy-to-reach buttons and knobs throughout the cabin. Nissan has made the most of the space with good small-item storage, easy-access USB ports up front, and more than one storage option for your smartphone while driving and charging.

Climate controls are easy to understand and just as easy to find with your fingers while driving. The seat warmers act quickly and provide the expected amount of warmth on both settings. Nissan gave the SR tester a heated steering wheel, a nice addition for buyers in states with a cold winter.

The Kicks has best-in-class front seat legroom though its hip room proportions make the front seats more compartmentalized than what is ideal for larger and taller drivers. Adults can easily fit in the back seats – not something that is a standard in the subcompact class.

The available tonneau cover provides a good amount of hidden storage, covering about two-thirds of the rear cargo area. The cover is easily lowered and maneuvered. 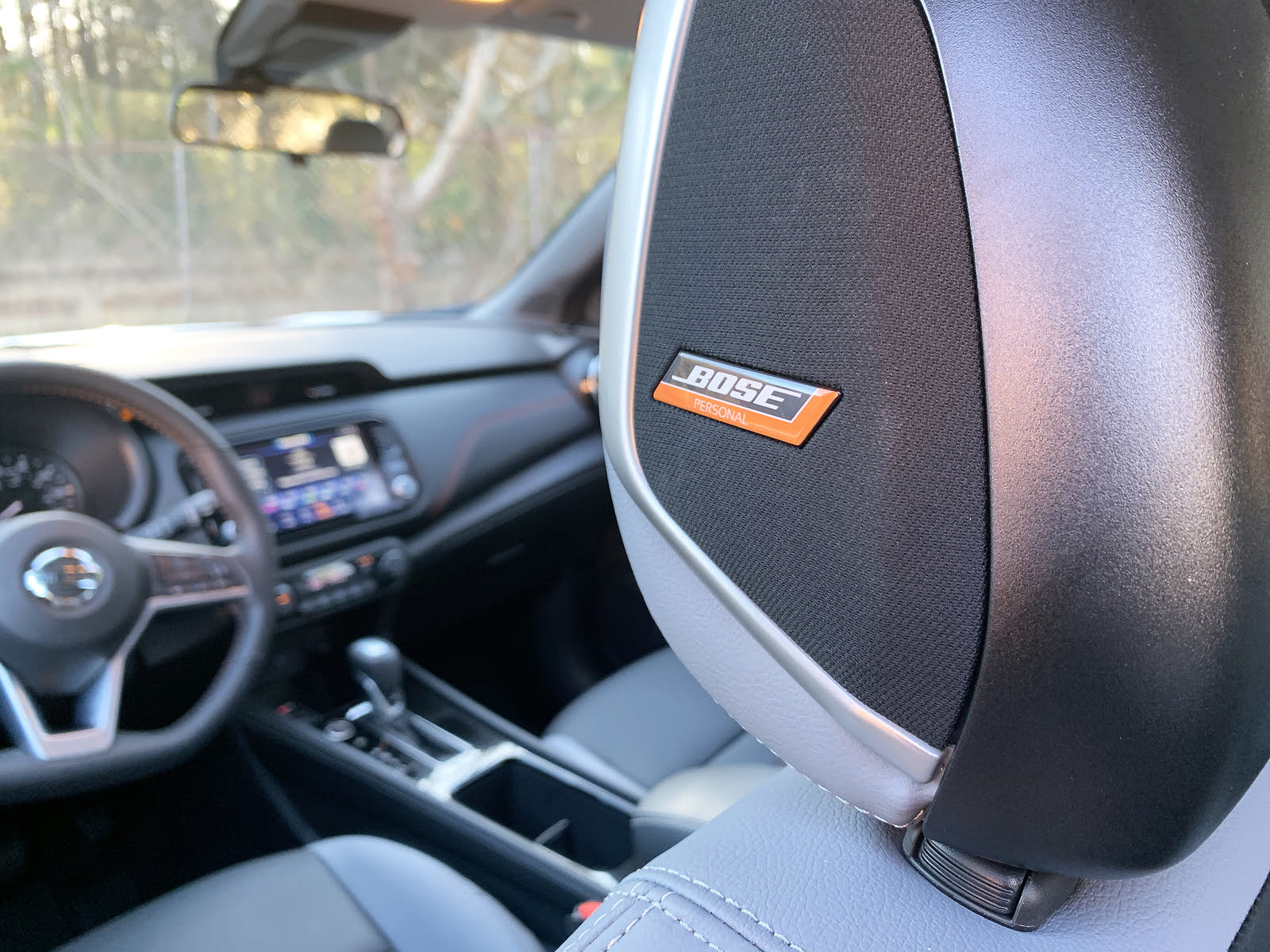 The amount of modern technology on the Kicks is on par with what other automakers offer in their subcompacts. In fact, it’s a little better than what you’ll find in the Chevrolet Trax and Ford EcoSport.

This budget-friendly SUV has one of the best sound systems in its class. When buyers get the Kicks SR Premium Package, their vehicle receives the class-exclusive Bose Personal Plus sound system, which uses eight speakers (including two 2.5-inch Bose UltraNearfield neodymium speakers in the headrests of the front seats) and Bose signal processing to immerse the driver in 360-degree sound. The sound from the system can be adjusted using the Bose PersonalSpace Control module that is built into the car’s infotainment system.

Nissan makes the Kicks available with a surround-view monitor, which provides a composite 360-degree bird’s eye camera view of the Kick’s exterior in relation to what’s around the model. This is especially handy when parking and can be accessed with the quick push of the easy-to-find “camera” button on the dashboard.

A WiFi hot spot is available and allows for over-the-air updating. NissanConnect services, a suite of convenience and security features, is available when buyers opt for the hot spot. 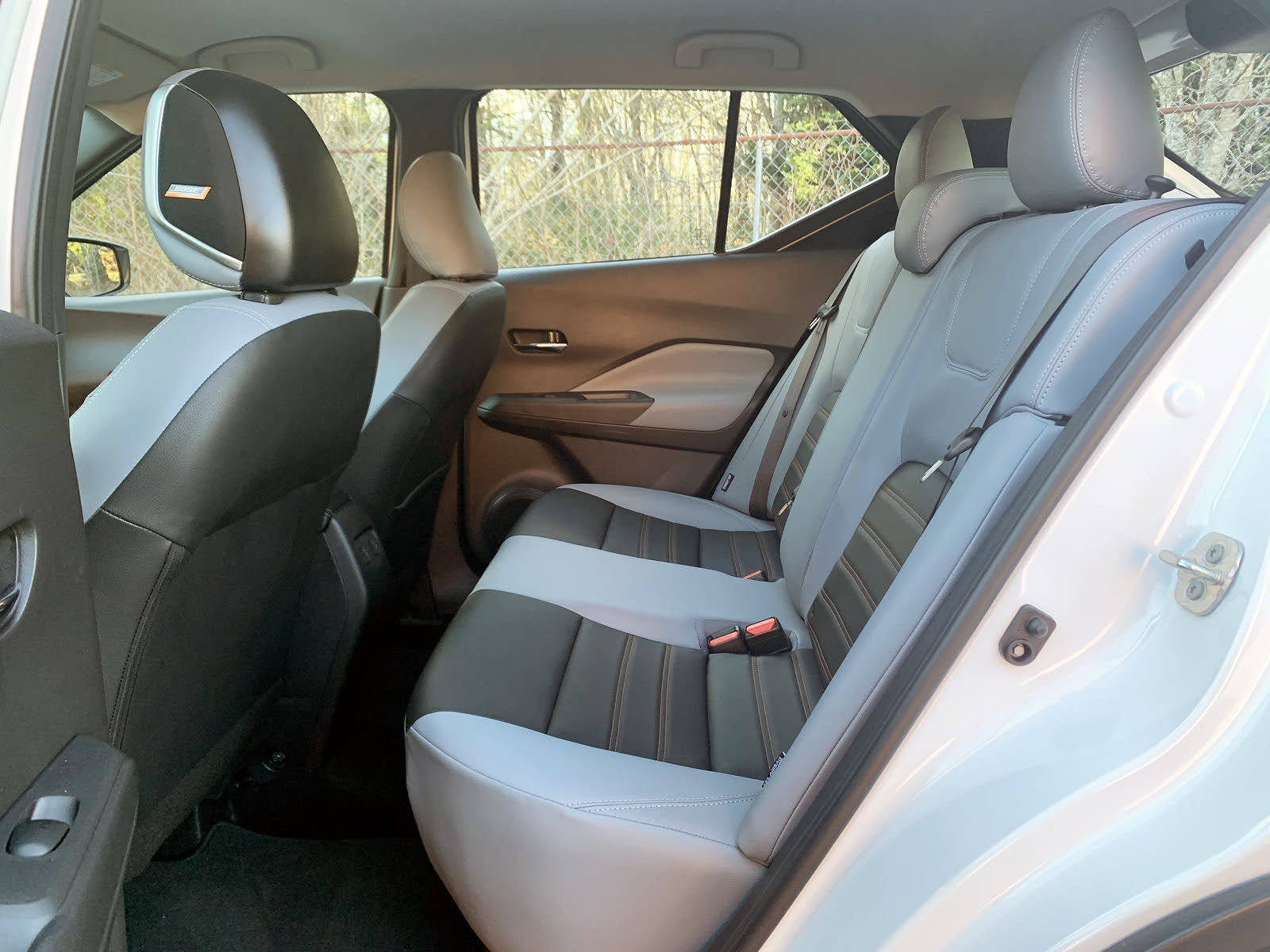 Nissan equips every Kicks with 10 airbags. Kicks SV and SR get a driver alertness monitor and rear door alert as standard. Two LATCH connections on the rear outboard seats are standard.

The 2021 Kicks has not been crash-tested by the Insurance Institute for Highway Safety (IIHS). The mechanically similar 2020 model was and it scored all Good marks in the crashworthiness section of testing. Its headlights were rated at either Acceptable or Poor, depending on trim level, but Nissan has given the Kicks new headlights as part of its 2021 model refresh so it’s likely those scores will improve.

The National Highway Traffic Safety Administration (NHTSA) has not crash-tested the 2021 Kicks, but the 2020 Kicks was tested and received a four-star overall rating. The Kicks also has a strong history of few recalls, with only one occurring over the last three model years. 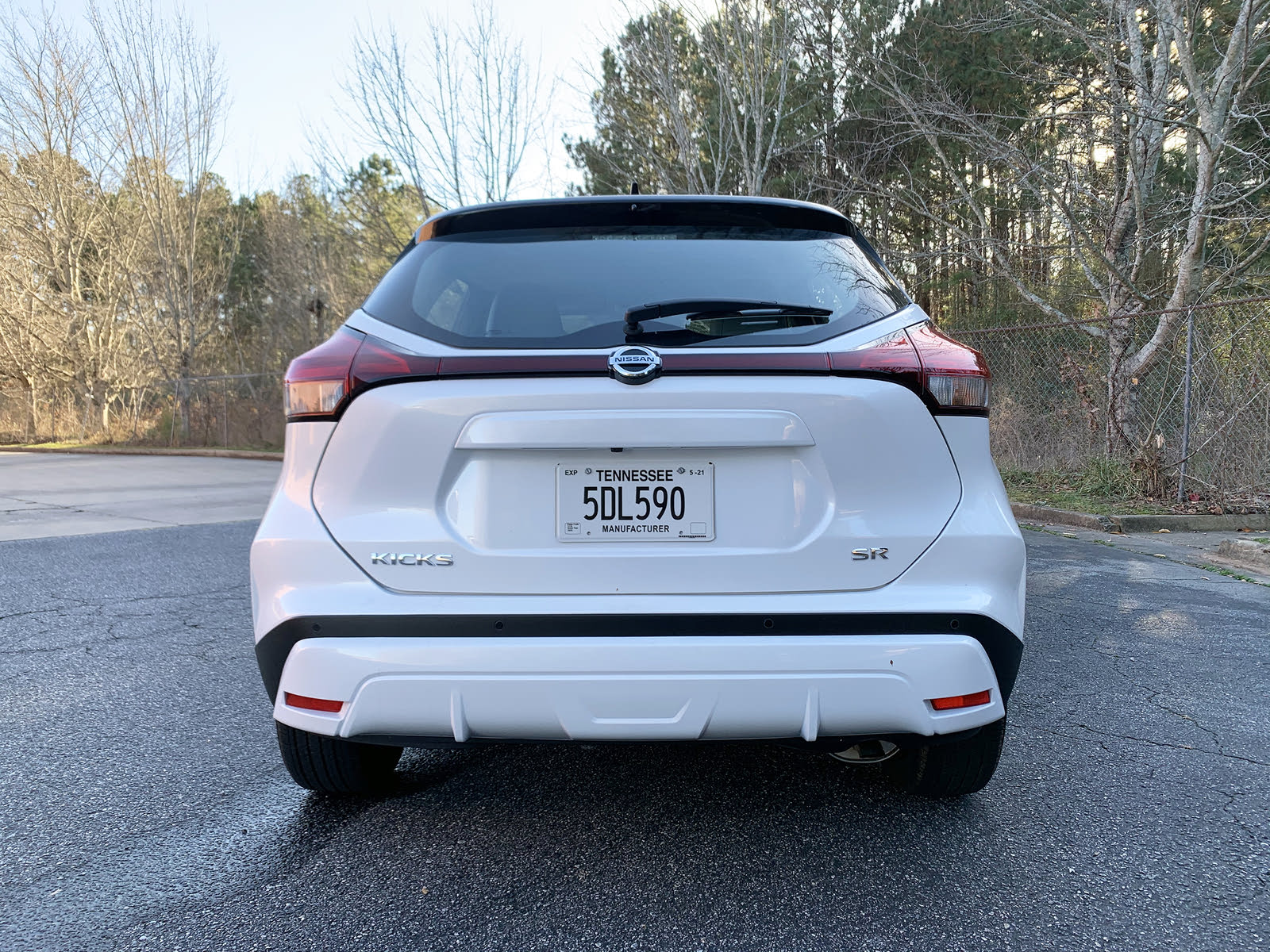 The Nissan Kicks is a subcompact SUV that delivers a lot of bang for its buck, especially with this model year’s more premium upgrades. The model starts at $19,500 for the S grade. There is an additional $1,095 destination and handling fee on every model. That price is on par with its competition.

Pricing in the subcompact SUV class varies greatly. The Hyundai Venue and Nissan Kicks are two of the least expensive models to get into with sub-$20,000 starting prices. They also top out far lower than the competitor vehicles like the Honda HR-V, Trax, Toyota CH-R, Fiat 500X, Mazda CX-3, EcoSport, and Kia Seltos.

Have you driven a 2021 Nissan Kicks?
Rank This Car

Enter your zip to see incentives for a new Kicks in your area.