The GLS-Class brings a new level of luxury to full-size SUVs, and is available with surprising performance. 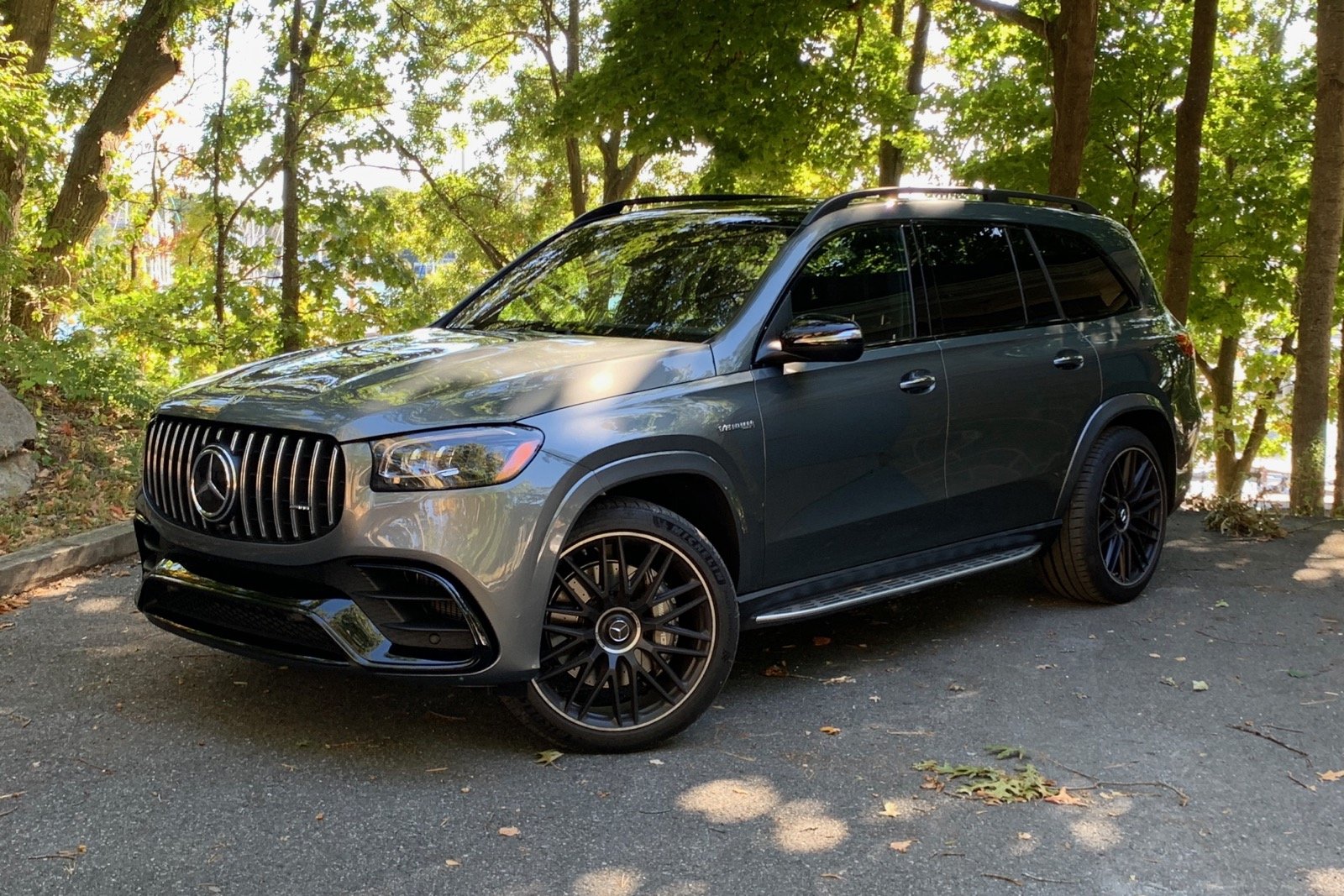 The “S” in the 2021 Mercedes-Benz GLS-Class name is meant to connect the SUV to the S-Class flagship sedan. In this sense, the GLS is the S-Class of SUVs, and it delivers on that positioning. The 2021 GLS-Class has three rows of spacious seating, and puts comfort above all else. The GLS can hold groceries, weekend bags, antique desks purchased from a roadside consignment shop—all things that would require a lot of negotiating in the S-Class sedan.

The GLS-Class is one member of a growing fraternity of full-size, three-row, luxury SUVs. Their ranks include the Cadillac Escalade, Lincoln Navigator, Infiniti QX80, and the more recent BMW X7. The GLS sets itself apart with a higher standard of luxury, and impressive performance… if you’re willing to shell out the cash. 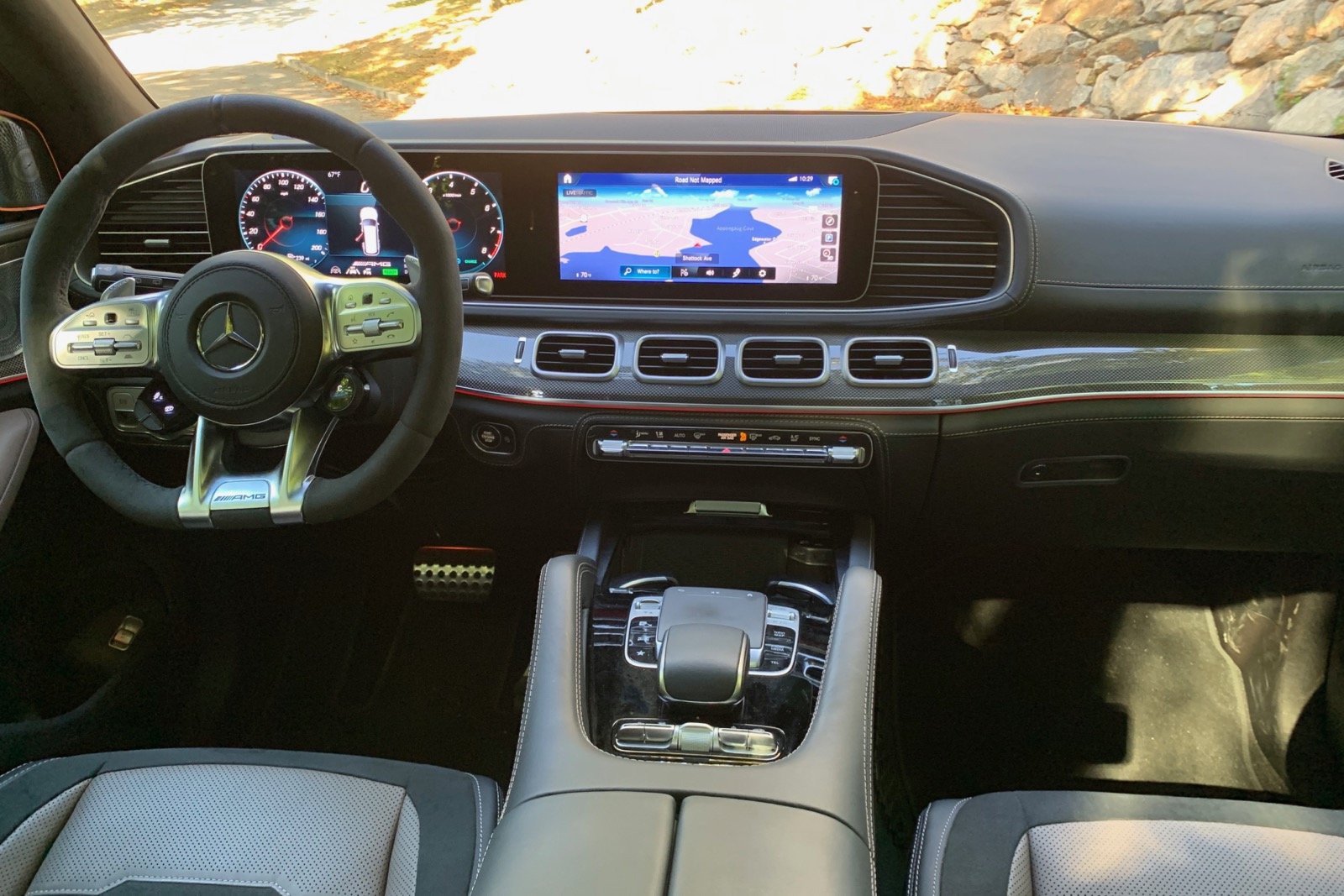 The third generation of the Mercedes-Benz GLS-Class was introduced for the 2020 model year and carries over to 2021. The GLS started life as the GL-Class, which arrived for the 2006 model year. It was intended as a replacement for the boxy G-Class. But the G-Class' Kardashian-fueled popularity kept it around, so the GL wound up appealing to more pragmatic (but equally well-heeled) customers. Its three rows and more comfortable interior made the GL a lavish, family-hauling alternative to the Navigator and Escalade. The name-change from “GL” to “GLS” occurred half-way through the model's second generation.

Though this is a big SUV, the current GLS does not present visually as large as its predecessors. The GLS has softened angles and lines, and some visual tricks to make it look more svelte than it really is. Inside, the GLS features a beamy, futuristic cabin, exaggerated by the massive digital screen that spans nearly two-thirds of the dash area. It signals how tech-reliant the controls are in the latest iteration of the GLS (a subject we’ll get to later).

A number of option packages are available on the GLS 450. The Convenience Package costs $1,750 and adds ventilated front seats and four-zone climate control. The Warmth & Comfort Package ($1,320) tacks on heated armrests for the first- and second-row seating (seriously). The Executive Rear Seat Package ($2,200) adds a tablet for rear-seat controls and also provides rear-seat wireless device charging.

Our test model was the AMG GLS 63. It visually distinguishes itself from the rest of the lineup with more aggressive bodywork, quad-outlet exhaust, and the chrome, slotted grille, inspired by the AMG GT supercar. Inside, the GLS has a performance-inspired flat-bottomed sport steering wheel. It even has a motorsport-inspired stripe at top-dead-center on the steering wheel. Of course, in true luxury-SUV fashion, the stripe is a leather strip, set on an Alcantara wheel. 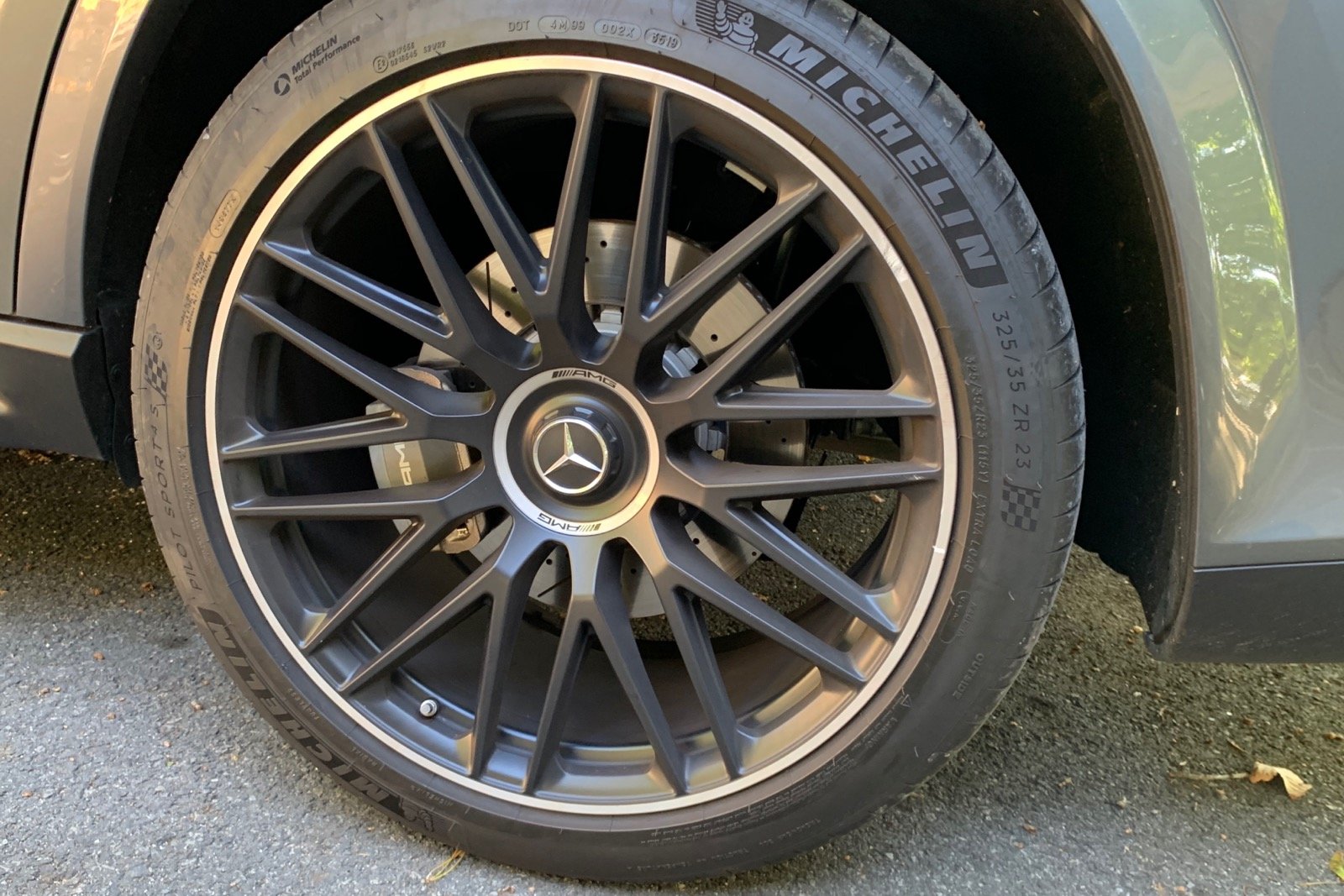 The entry-level GLS 450 is powered by a twin-turbocharged 3.0-liter inline-six engine. It makes 362 horsepower and 369 pound-feet of torque. The GLS 580 features a twin-turbocharged 4.0-liter V8 that makes 483 hp and 516 lb-ft. Both the GLS 450 and GLS 580 route power through a nine-speed automatic transmission to Mercedes' 4MATIC all-wheel drive system.

Our AMG GLS 63 came equipped with a hand-crafted 4.0-liter twin-turbo V8 engine. It cranks out 603 hp and 627 lb-ft of torque. Power is sent through a nine-speed AMG twin-clutch automatic transmission to all-wheel drive. All engines come standard with Mercedes’ EQ Boost 48-volt mild-hybrid system. In all three engines, EQ Boost is able to add an extra 21 hp and 184 lb-ft of torque when needed. The battery power from EQ Boost also powers the AMG Active Ride Control, and it even helps spool up the turbochargers more quickly.

The AMG GLS 63 is capable of going from zero to 60 mph in just 4.1 seconds on the way to a top speed of 174 miles per hour. These are incredible numbers for an SUV that weighs 5,400+ pounds. Acceleration is tangible, and when pressed, will pull you back into your seat.

The GLS 63 has an adaptive, adjustable, air suspension system. It can adjust the ground clearance between 7.9 inches and 8.5 inches. That might not seem like a lot, but it is enough to lower the vehicle for better cornering or raise it to clear obstacles. The GLS 63 also features double-wishbone front suspension and multi-link rear suspension. This big SUV corners with a precision that defies convention and logic.

Like many modern cars, the GLS 63 has multiple drive-mode settings, including Individual (a.k.a. custom), Comfort, Sport, and Sport+. Mercedes-Benz has taken the drive-mode toggle game to a new level. It consists of a dial and a pair of buttons that extend from the sport steering wheel. Each of these modes controls the throttle response, transmission mapping, suspension stiffness, steering feel, and even the exhaust mode. Many of these items can be toggled individually in the center console, but that steering-wheel-mounted dial is a simple and easy-to-locate feature. Given Mercedes’ success in Formula One racing, the location of the dial is also likely a nod to its F1 race cars, which put nearly all driver controls on the wheel itself.

Despite its impressive cornering abilities, all versions of the GLS have a hushed, composed ride thanks to E-Active Body Control (A $6,500 option). New England has notoriously bad roads, and the GLS glides effortlessly over cracks, bumps, and potholes. Just as crucially, the GLS drives and handles like a smaller car, and is easily maneuverable in the city or a busy parking lot. 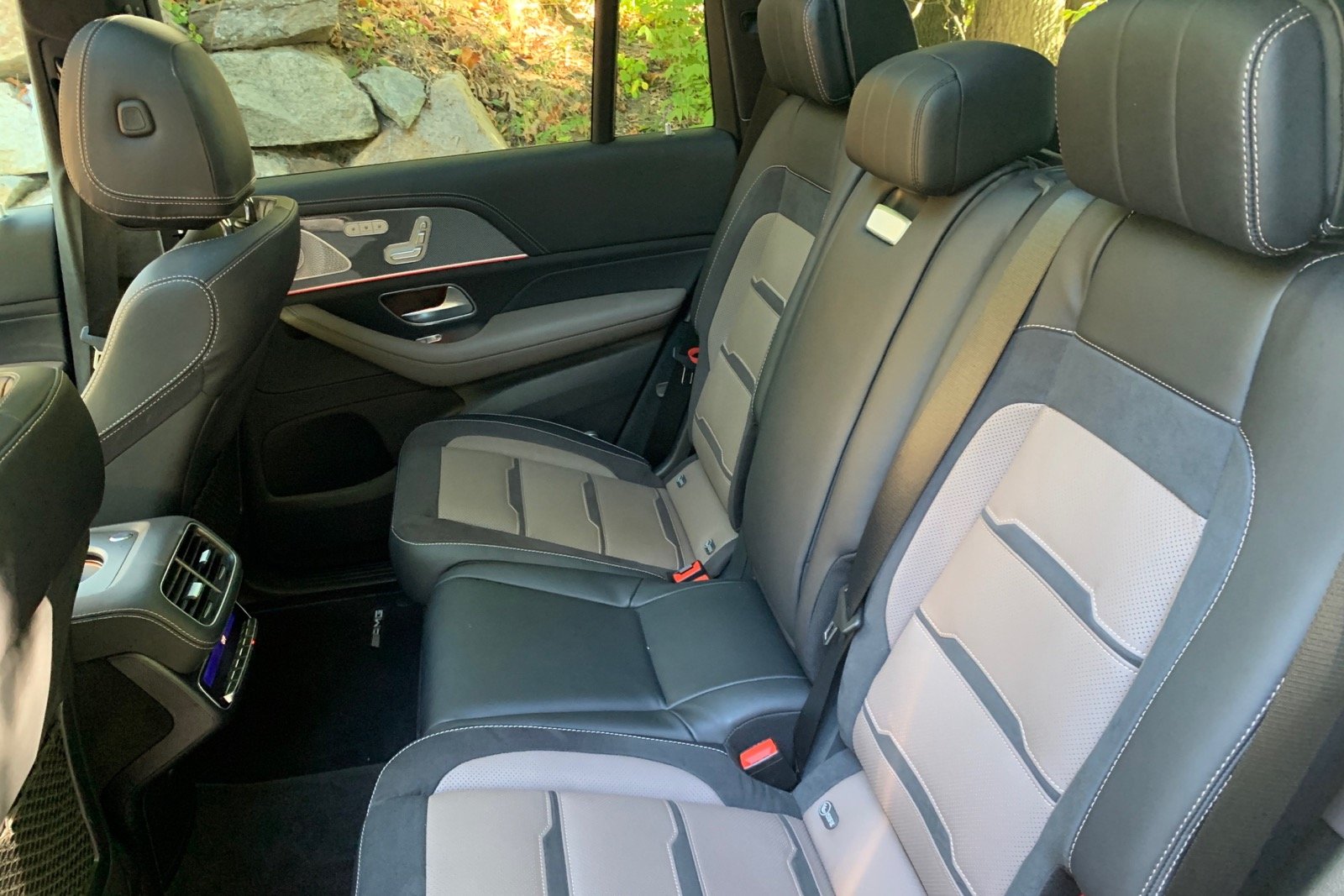 The GLS-Class has three rows of spacious seating, with plenty of headroom and legroom for first- and second-row occupants. Seven-passenger seating is standard, but optional second-row captains’ chairs lower seating capacity to six. The front-row passengers can slide their seats back (using the occasionally-frustrating door-mounted controls), and the rear-seat passengers will still have plenty of space. Things like lumbar support and the massaging function are all controlled through the touch screen, which adds extra steps. The third row is not as spacious but is still perfectly fine for full-size adults. This is something that many three-row SUVs cannot claim.

The GLS also has more cargo space behind the third row than the rival BMW X7. With all seats up, the GLS has 17.4 cubic feet of cargo space. That grows to 42.7 with the third row folded. To open that up, the GLS 63 has a helpful power-folding third row, with toggles located back near the tailgate. Folding the second and third rows brings total cargo space to 87.4 cubic feet. That’s just a hair less than the outgoing version of the GLS and is about average for the full-size luxury SUV glass. For the most cargo space in the class, check out the Cadillac Escalade. It has 94.2 cubic feet and is upped to 120.9 cubic feet with the long-wheelbase Escalade ESV.

The driver and front passenger enjoy plenty of cubbies and compartments for items and water bottles. The in-door bins are spacious, and there is a combination cup-holder/wireless-charging pad. The center console opens with a pair of butterfly doors, and is large enough for a very small bag, but is otherwise too small for a purse. 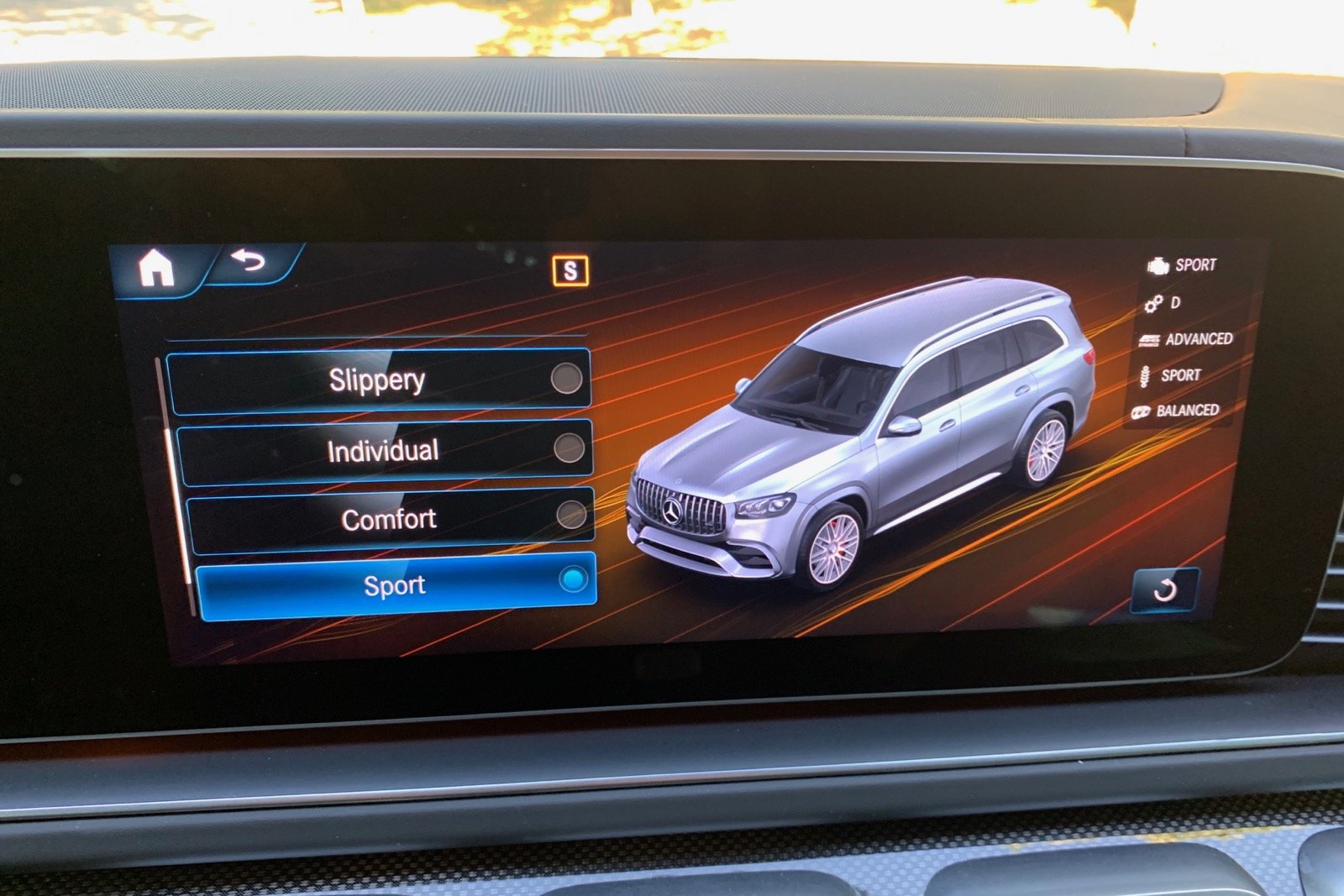 The GLS comes standard with the new MBUX infotainment system, which stands for Mercedes-Benz User Experience. It has the familiar central controller, though now it is a simple trackpad. The big changes surround the central infotainment screen. It is now a massive touch screen, thus responding to one of the largest areas of critique for Mercedes’ previous infotainment efforts. Riders can either swipe using the trackpad or the screen itself, cycling through large, easy-to-read icons. It also includes Apple CarPlay and Android Auto, but it requires a USB-C cable to connect. There are still countless Apple users that would need an adaptor to connect their USB to the USB-C port.

A key component to MBUX is its voice-control system. Simply saying, “Mercedes” or “Hey Mercedes” brings up the voice prompt, much like Apple's Siri or Amazon Alexa. It can understand complex commands, such as “Find me a gas station,” or “find me a seafood restaurant.” Since it does respond to the Mercedes name, if you are the type who brags about your car to others, you may unintentionally activate the MBUX system.

The massive digital dash in the GLS is more than just the infotainment system. The dramatic glass screen extends to the fully-digital instrument panel, and both are controlled by touch-sensitive pads on the steering wheel. The right pad controls the infotainment screen, while the left pad controls the instrument panel. The driver can swipe through a number of different looks for the display. There’s certainly a learning curve to it, but once learned, makes the seemingly endless technology in the GLS more manageable. 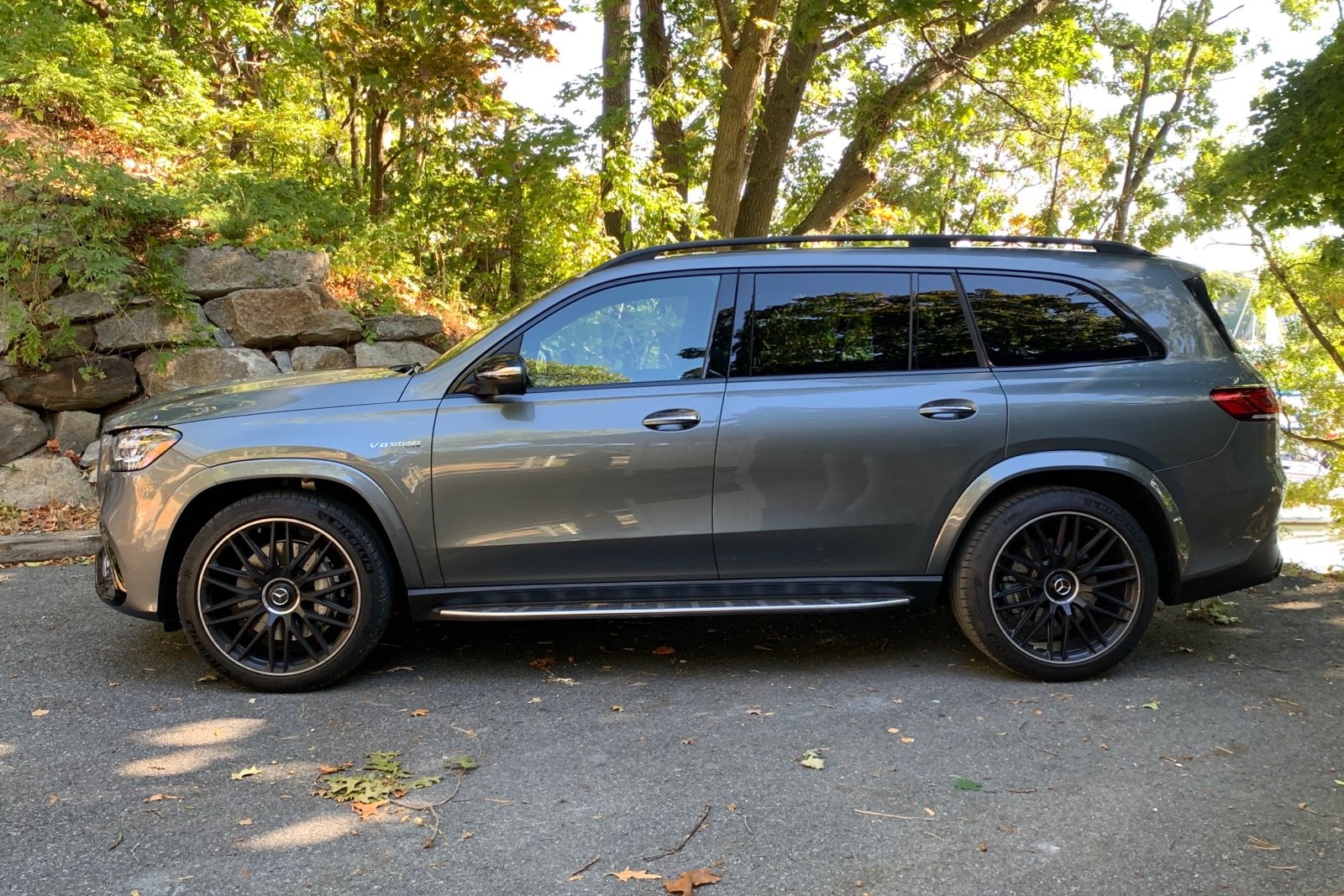 The GLS comes standard with a host of driver-assistance features. This includes Active Brake Assist (automatic emergency braking), forward-collision avoidance, rain-sensing wipers, blind-spot monitoring, and automatic high beams. Other standard safety features include automatic parking assist, a surround-view camera system, a driver-drowsiness monitor, and even crosswind assist. The latter can sense gusts on the highway and make small steering inputs so you don’t veer within your lane.

Available safety tech includes lane-keep assist, lane-change assist, adaptive cruise control, and a following-distance indicator. The GLS is also available with stop-and-go cruise control that can follow along with traffic. The GLS comes standard with a full array of front-and-side-impact airbags, traction control, self-tensioning seatbelts, and a tire-pressure monitoring system. 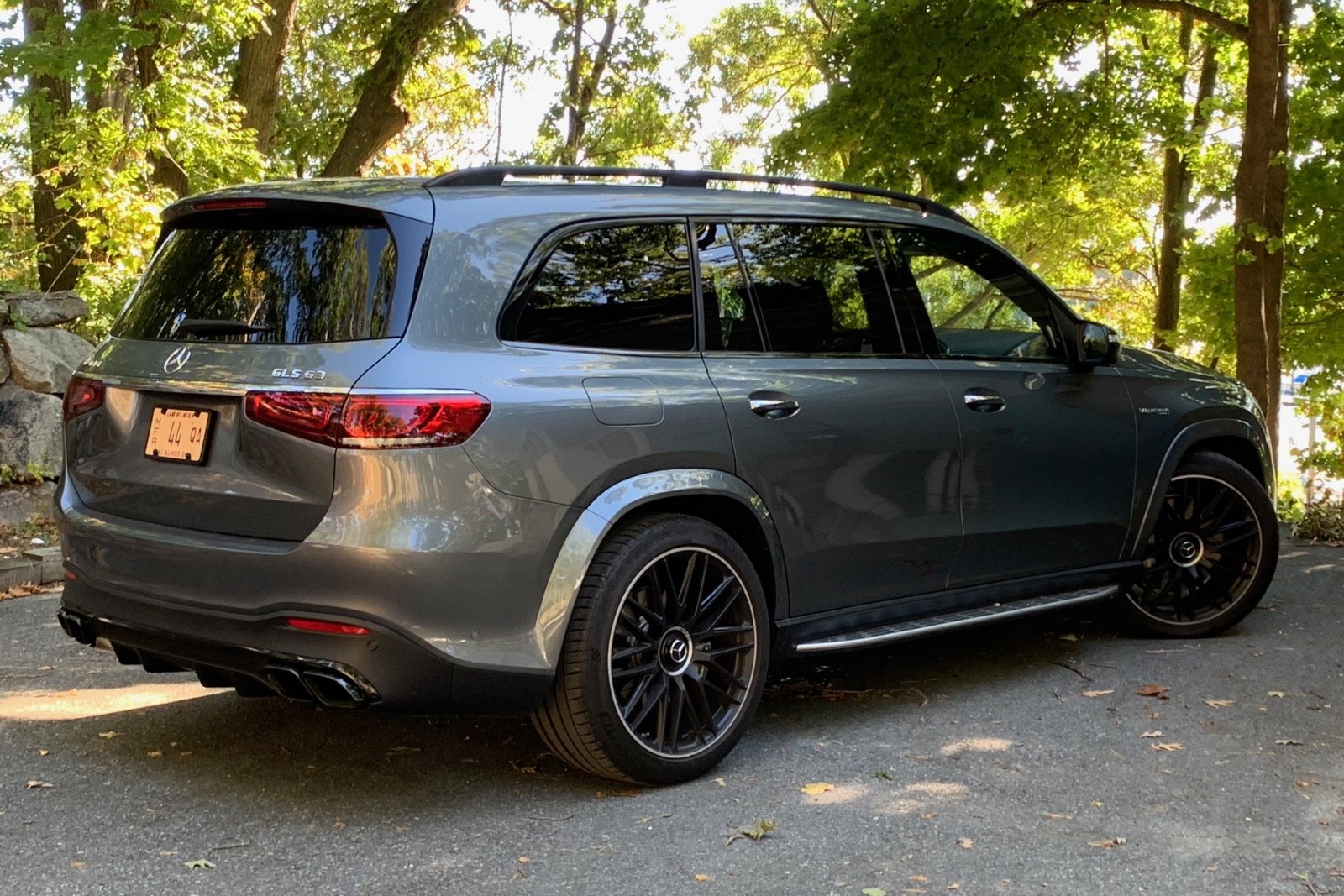 The most-efficient variant of the GLS-Class is the six-cylinder GLS 450. It returns 20 mpg city, 24 highway, 21 combined. The GLS 63 returns 14 mpg city, 18 highway, 16 combined. In our week of combined city and highway driving, we observed an average fuel economy of 15.3 mpg.

Base MSRP for the 2020 Mercedes-Benz GLS-Class is $76,000 for the GLS 450. A V8-powered GLS 580 starts at $98,800. Our AMG GLS 63 starts at $132,000 and came with a few options. On the top end, there are more expensive luxury SUVs. The Land Rover Range Rover SVAutobiography can top $200,000, and Mercedes offers a Maybach ultra-luxury version of the GLS that starts at $160,500. But looking to base prices, the GLS is right in the meat of the lineup, with the Cadillac Escalade, BMW X7, and Lincoln Navigator all in the same neighborhood on price.

Other SUVs may be able to claim individual superlatives, but the GLS has the holistic approach to luxury down. The fit-and-finish is phenomenal, and it is one of the most comfortable places to sit for a long ride. When it comes to luxury, those are the attributes that matter.

What's your take on the 2021 Mercedes-Benz GLS-Class?

Have you driven a 2021 Mercedes-Benz GLS-Class?
Rank This Car