Looking for a Used GLA-Class in your area?

The Mercedes-Benz GLA was completely redesigned for the 2021 model year, taking it from a mundane, high-riding hatchback to a zippy, more traditional small SUV. 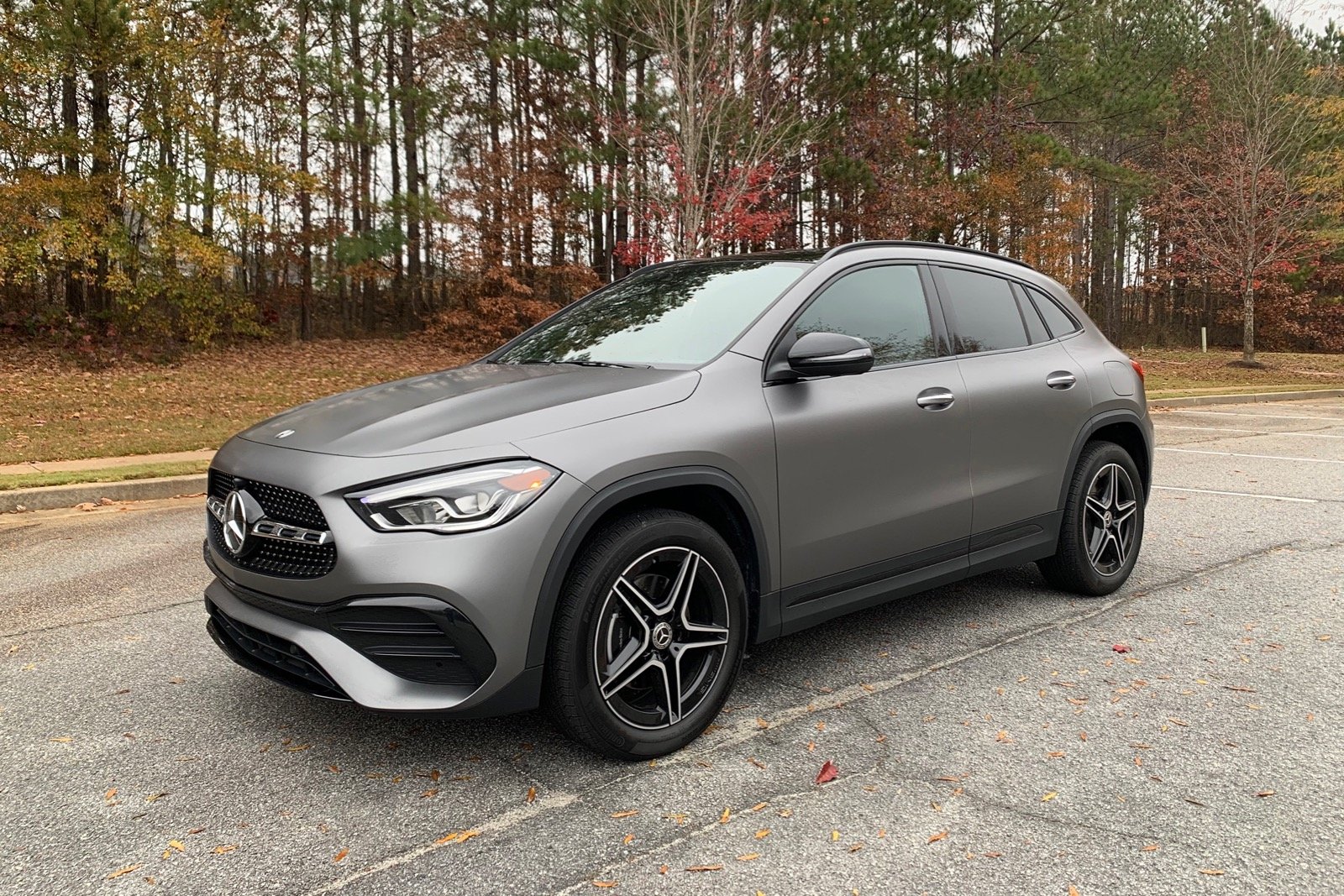 The 2021 Mercedes-Benz GLA delivers on all thing things a subcompact SUV is supposed to do. It’s cute, compact (but not cramped), and easily maneuverable. The new, eighth-generation GLA gives customers a lot of what they expect but also lacks the refinement of other Mercedes models. 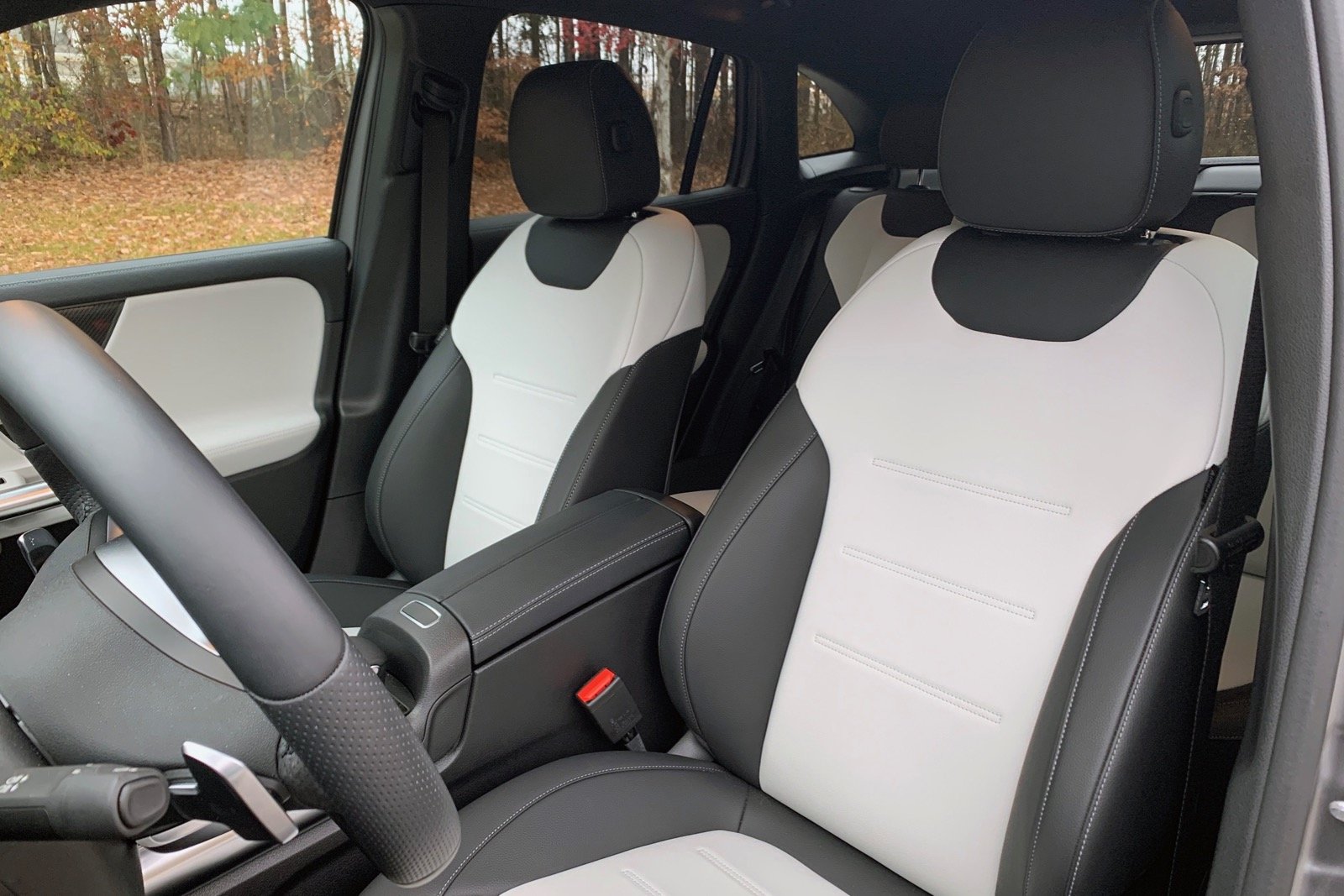 The Mercedes-Benz GLA’s looks have been made modern with the new generation of the model. Its proportions and styling make it easy to see where its slot in the Mercedes lineup is as the smallest SUV offered, below the GLS, GLE, GLC, and GLB (and all their respective variants). It's the entry-level model in the Mercedes SUV lineup.

Its wheelbase and exterior measurements put the GLA on the larger side of the subcompact class. It's about the same size as the BMW X1.

The new GLA is three inches taller and half an inch shorter in overall length than its predecessor. The GLA has short overhangs and is wrapped in cladding, which adds to its beefier dimensions, with a wider track completing the elegantly-muscular look. Though the windows look small to outsiders, the car’s seating positions and greenhouse provide ample visibility.

Inside, the tester GLA 250 was filled with less-than-premium surfaces for the eye to settle on, including those that are easily scratched. This is an issue that the BMW X1 struggles with as well. The GLA's seats were the nicest appointed pieces of the interior, but passengers sit on those and don't spend much time looking at them before they do.

Though it looks good from a distance and in photos, the GLA doesn't measure up in person compared to other luxury crossovers. You can get a nicer interior on a mass-market model like the similarly-sized Buick Encore GX or Nissan Rogue Sport, for the same price. 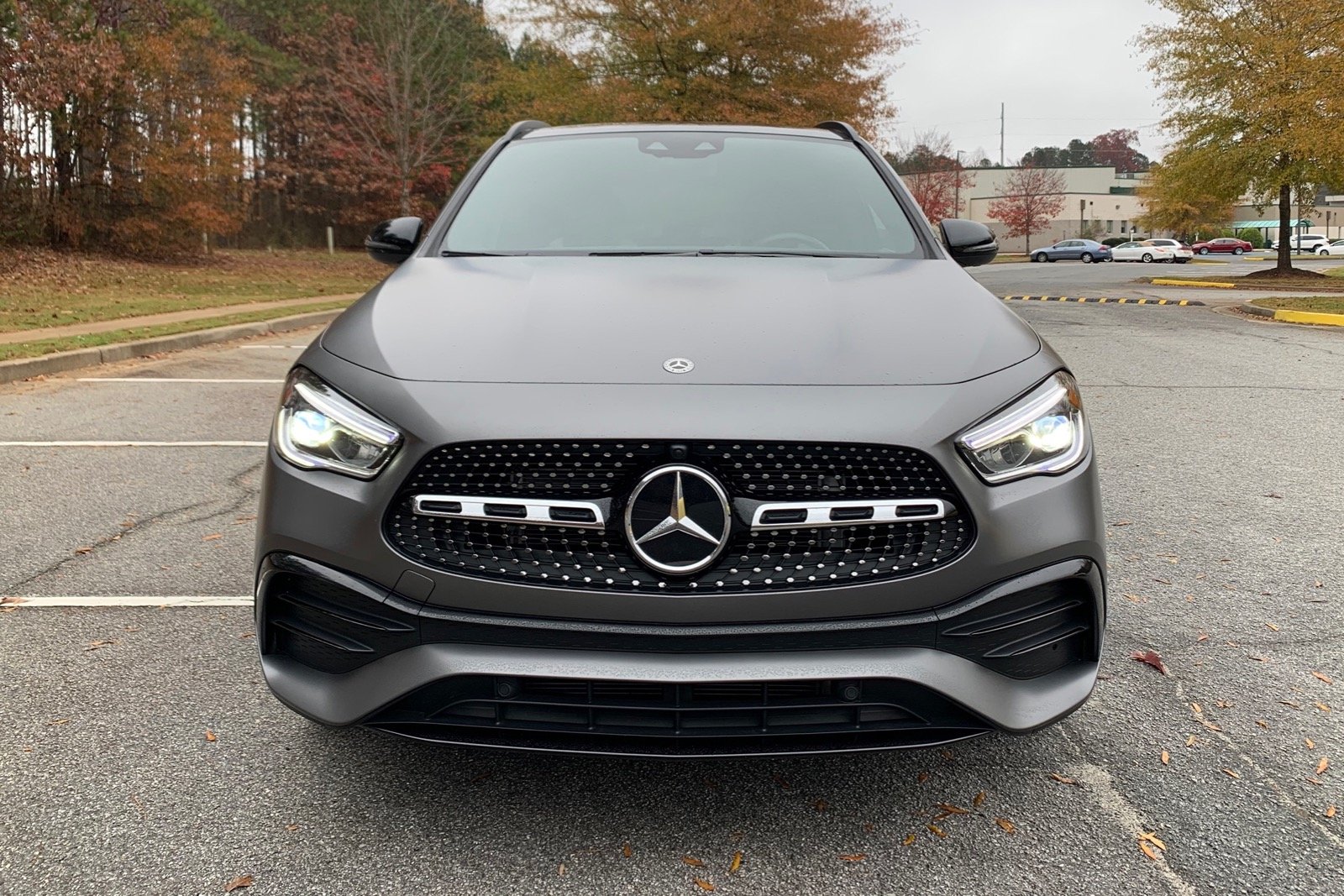 Mercedes sells the GLA in three variants, with another coming soon. There’s the traditional GLA 250 and GLA 250 4MATIC, and the AMG GLA 35. A high-performance version, the AMG GLA 45 is on the way.

Mercedes engineers designed the GLA to be front-wheel drive like most other SUVs of its size on the market today. All-wheel drive (AWD)—or as Mercedes calls it, 4MATIC—is available. The performance of the SUV’s AWD system can be regulated using the car’s drive modes. Switching to Eco/Comfort gives the car an 80/20 front/rear torque distribution ratio. Sport mode tunes that to 70/30. In Off-Road mode, the torque is distributed 50/50. Hill-descent control is also standard on Mercedes-Benz GLA-Class 4MATIC models.

The Mercedes-Benz GLA 250 and 250 4MATIC are powered by a 2.0-liter turbocharged four-cylinder engine that is paired with an eight-speed dual-clutch transmission. It delivers 221 horsepower and 258 pound-feet of torque. The engine propels the car to get from zero to 60 mph in 6.8 seconds, according to Mercedes. Its top speed is electronically limited to 130 mph.

The turbo-four engine gets an EPA-estimated 25 mpg in the city, 34 mpg on the highway, and 28 mpg combined. The 4MATIC version does one mpg worse in each category; lower fuel economy is typical for an all-wheel-drive vehicle. Those fuel-economy numbers are on the lower end compared to what the competition delivers.

The AMG GLA 35 has an AMG-enhanced turbocharged 2.0-liter four-cylinder engine under the hood, which is mated with an eight-speed dual-clutch transmission and AWD. It achieves 302 hp and 295 lb-ft of torque. Its zero to 60 mph time is 5.1 seconds, per Mercedes.

The AMG GLA 45 ups the power of its turbocharged 2.0-liter four-pot to 382 hp and 354 lb-ft of torque. It too is paired with an eight-speed dual-clutch transmission and AWD. It requires just 4.3 seconds to get from zero to 60 mph, according to Mercedes and has an electronically limited top speed of 155 mph.

Mercedes gave the AMG GLA 45 much of the same equipment as the lower-level AMG GLA 35. It also gets a sophisticated engine cooling system, upgraded brakes, and two additional dynamics modes: Pro and Master. The model has also been shored up to be more rigid and has a reinforced body shell, making it more stable on the track and more capable at higher speeds. A Race drive mode is added when buyers choose the AMG Dynamic Plus package.

As tested, the GLA 250 had trouble off the line during daily driving. Its turbo lag added together with low-end gearing confusion from the automatic transmission to make the mundane drive from stop sign to stop sign in a neighborhood a comfortable creep followed by a robust burst of energy. Once out of the neighborhood and up to full speed on the highway, the powertrain performed far better, however, there was nothing elegant about it.

The GLA 250 has a MacPherson strut front suspension and a four-link rear axle. These enable good ride quality but not tranquility. Any promise of that is interrupted by the large amount of road noise that permeates the cabin of the SUV at high speed.

Its 37.4-foot turning circle is not as tight as many of the models in its class, meaning that the GLA may be harder to maneuver in tight city driving and parking situations than the competition.

Steering was rather numb, but that’s typical for this class of vehicles. The GLA's steering wheel offers all that a driver needs at their fingertips, except for an easy way to interact with the infotainment system's traditional functionality. For that, fingers must be moved to the touch screen or touchpad. 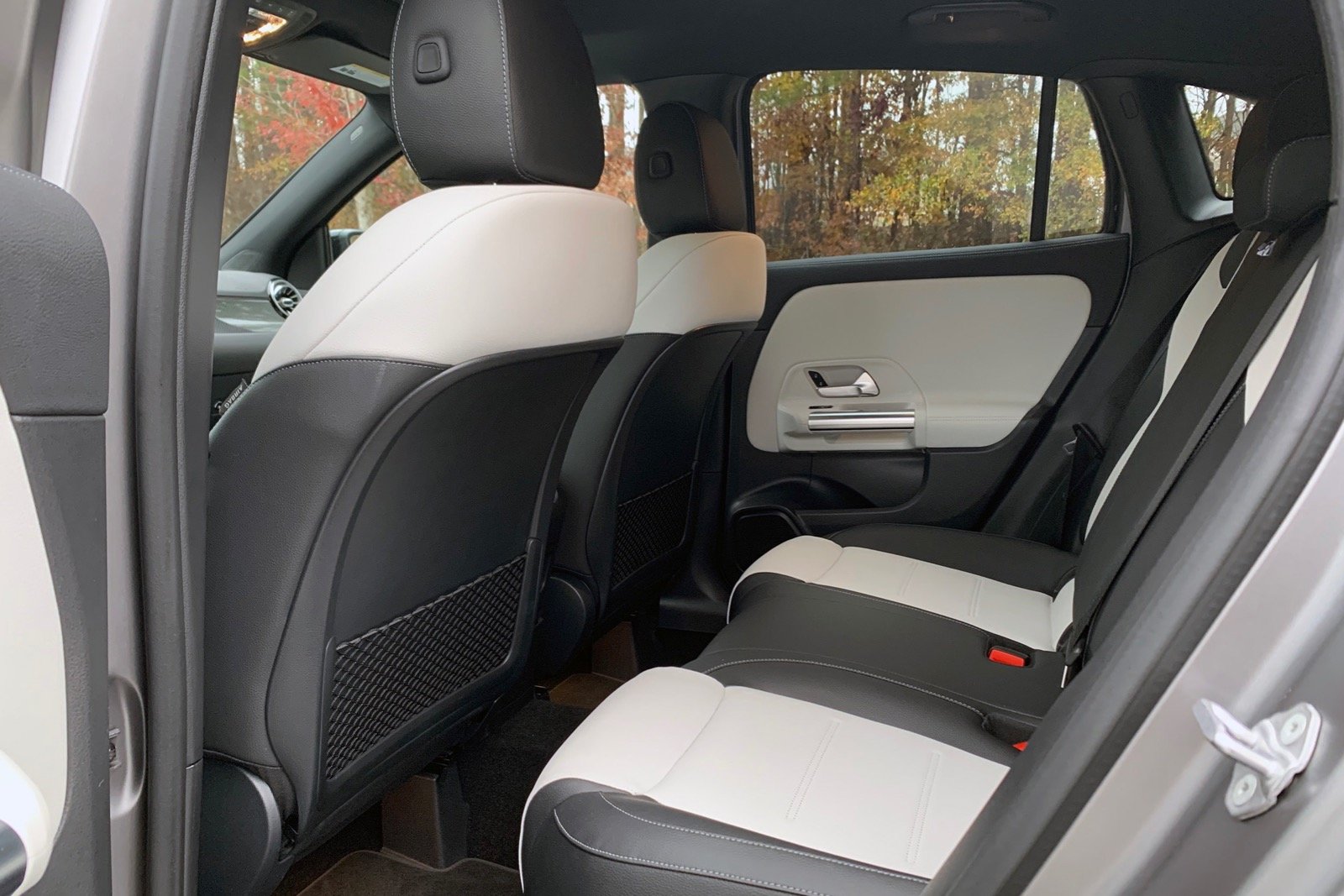 The added height of the GLA gives the vehicle a more SUV-like seating position than its predecessor. Ingress and egress are easy, as they should be with a model of these proportions. Headroom and legroom for front passengers are fantastic for a vehicle of the GLA’s size.

The rear seats, which have a 40/20/40 split-fold, got an upgrade as part of the GLA’s redesign. They now offer more legroom than before, making it possible for smaller adults to feel comfortable back there for an extended period of time. The five-seat GLA comes standard with synthetic leather upholstery. Its front seats are power-adjustable and the rear seats have reclining functionality. Though firm-bottomed, the seats in the GLA are relatively comfortable.

Moving cargo to and from the rear of the vehicle is relatively easy thanks to a low, nearly flat load floor and an available power liftgate. Behind the rear seats, there are 15.4 cubic feet of cargo space. With the seats folded that number jumps to 50.5 cubic feet. Those numbers are about average for the GLA’s class and enough to give ample storage space for a road trip’s worth of clothing and accessories for a family of four. For a larger Costco run, you may need to utilize the second-row seats for storage. 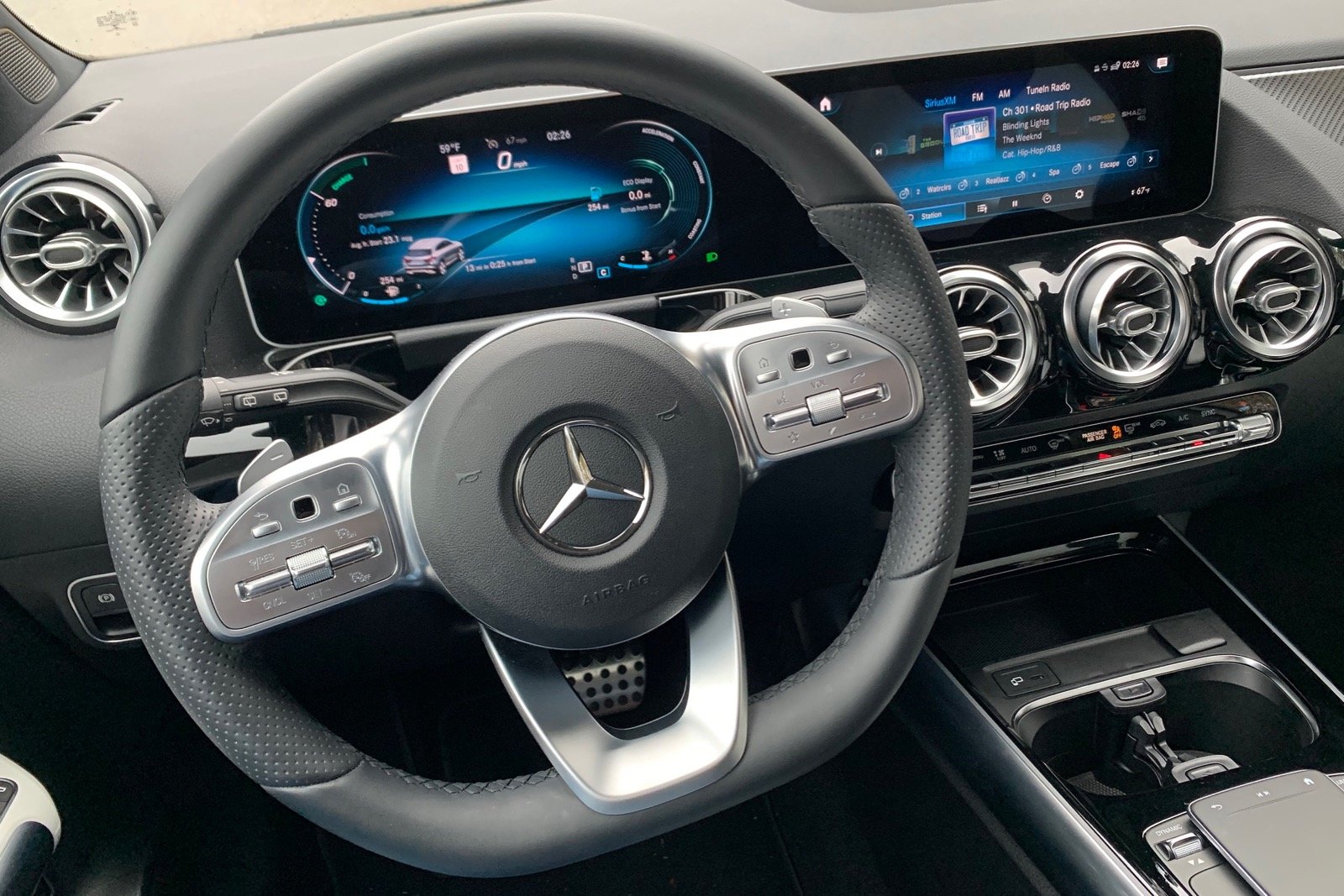 The GLA comes standard with the Mercedes-Benz User Experience (MBUX) infotainment system, which includes two 7.0-inch display screens in one housing. The centrally-located screen, which controls the infotainment system, reacts to touch and can also be operated by a touchpad controller on the center console. The list of standard equipment also includes four USB ports, Bluetooth, Apple CarPlay, and Android Auto.

The MBUX infotainment system is easy to use. Mercedes designed the system to have black and blue coloring with crisp white text. AMG models get AMG-specific displays that feature a variety of visual modes to choose from and more aggressive color stories. It includes the ability to personalize screens via driver profiles and has intuitive scrolling and selection functionality.

The system falters in its lack of a way to quickly scroll through a number of radio stations, preferring to run through a list of presets or recently-visited stations rather than just rowing through the channels. Voice-activated controls are quick to respond to commands via the “Hey Mercedes” initiating cue.

When it initially hit the market, the GLA was the first Mercedes model to feature a car-wash function. Using just one command, the SUV’s exterior mirrors are folded in and the side windows and sliding roof are closed. The car’s rain sensor is suppressed so that the windshield wipers are not activated while in the car. Climate controls automatically change to air-recirculation mode. When the driver leaves the car wash and accelerates above 12 mph, this functionality automatically turns off. 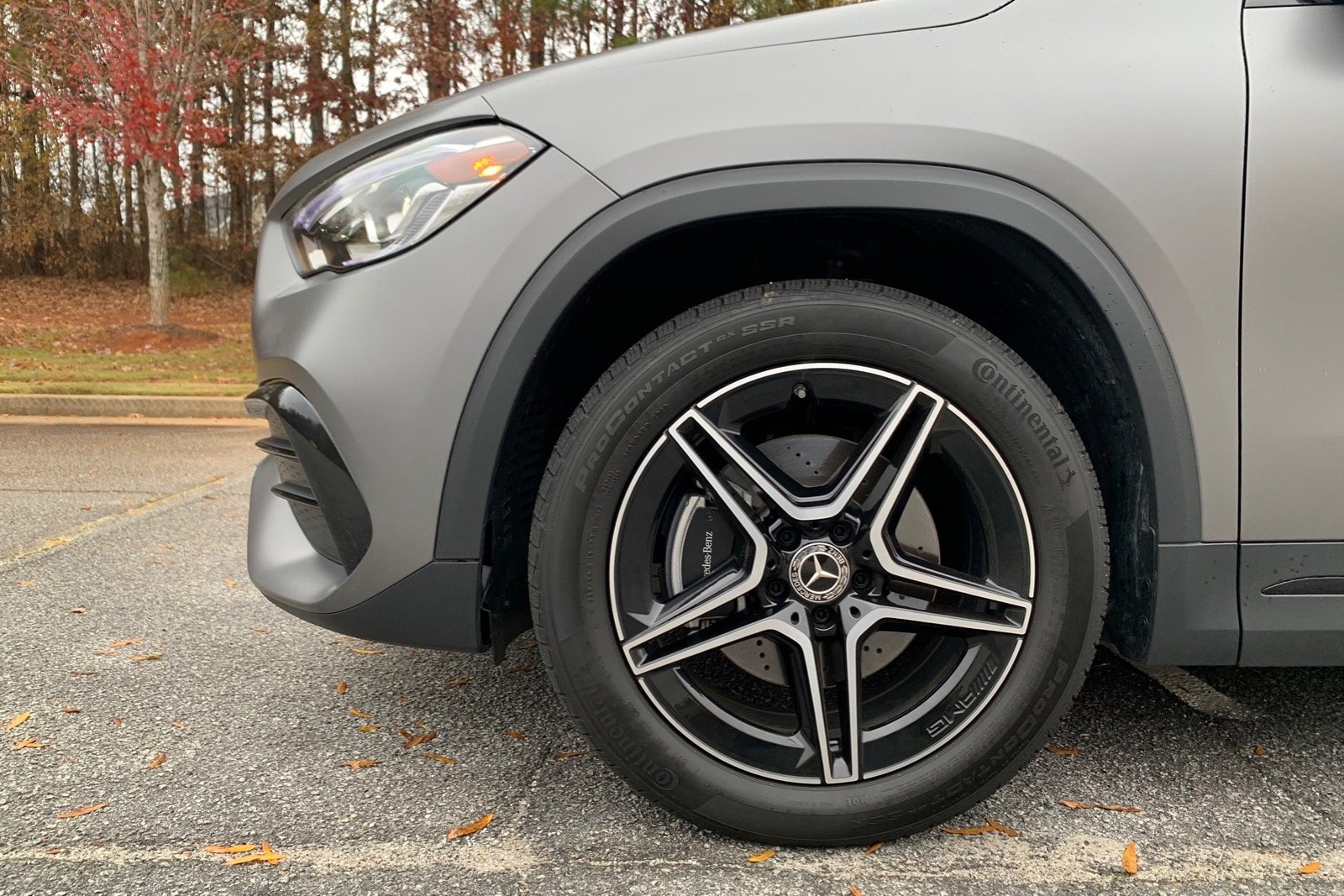 The Parking Assistance Package is $1,090 extra and includes a surround-view camera system and parallel and perpendicular parking assist technology.

As tested without the Driver Assistance Package, the GLA 250 felt chintzy. A buyer can get a stronger list of standard and available safety features on far less pricy SUVs. Even the 2021 Hyundai Venue—which starts at nearly $20,000 less than the GLA—comes with standard lane-keep assist. The similarly priced Cadillac XT4 has Teen Driver tech and Cadillac's Safety Alert Seat—two safety features the GLA does not offer. 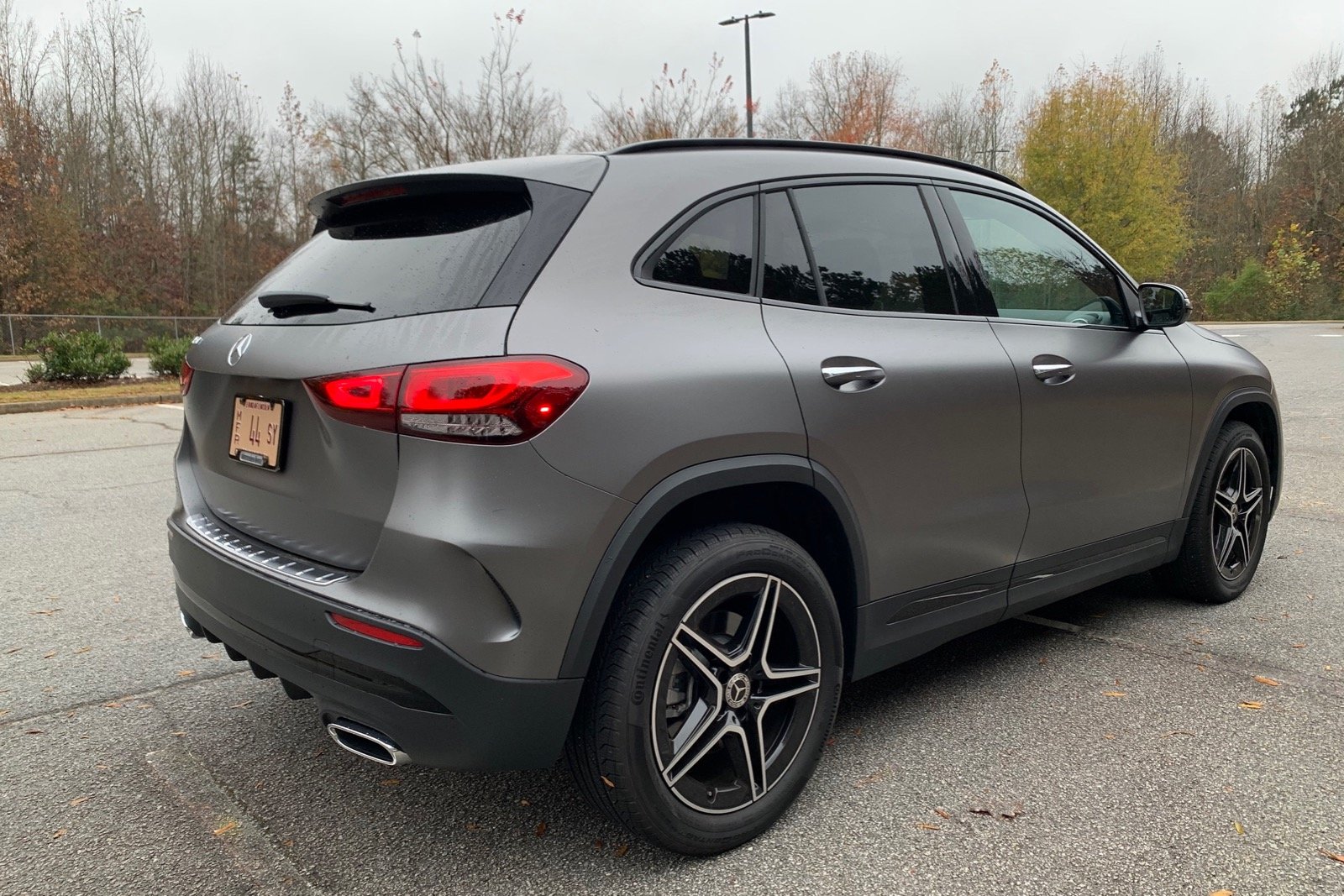 Though its price point puts it in line with other SUVs its size from luxury automakers, the GLA faces stiffer competition from the more premium offerings of mass-market brands. The SUV starts at $36,230—about where the GLA’s mass-market competition tops out.

The Audi Q3 SUV comes in a similar lineup structure, but not all make an appearance on dealer lots in the United States. The slightly larger BMW X3 has M performance variants that are rated for the track.

For buyers looking for a small, premium SUV with an electrification option, the Volvo XC40 is an attractive choice. It's better appointed than the GLA and available as a plug-in hybrid electric vehicle (PHEV) or a battery electric vehicle (BEV) powertrain, as well as traditional internal combustion engine options.

The Lexus UX is also a premium model with an electrified powertrain though its interior feels smaller than the GLA's.

The GLA’s interior materials, cabin noise, and unrefined powertrain make it seem like a less-than-premium SUV. The car’s tech offerings give it a boost, but other models offer a longer list of standard and available safety technology.

After test driving the GLA, it’s easy to see how one might see the three-pointed star on the front of the car and look at the car’s features and options list for a corresponding Mercedes-Benz brand surcharge. Buyers who are savvy and looking to get the most bang for their buck will want to test drive similarly-sized models like the Buick Encore GX, Jaguar E-Pace (it was refreshed for the 2021 model year with major changes), and Mazda CX-30 before committing to the GLA.

What's your take on the 2021 Mercedes-Benz GLA-Class?

Have you driven a 2021 Mercedes-Benz GLA-Class?
Rank This Car

Looking for a Used GLA-Class in your area?