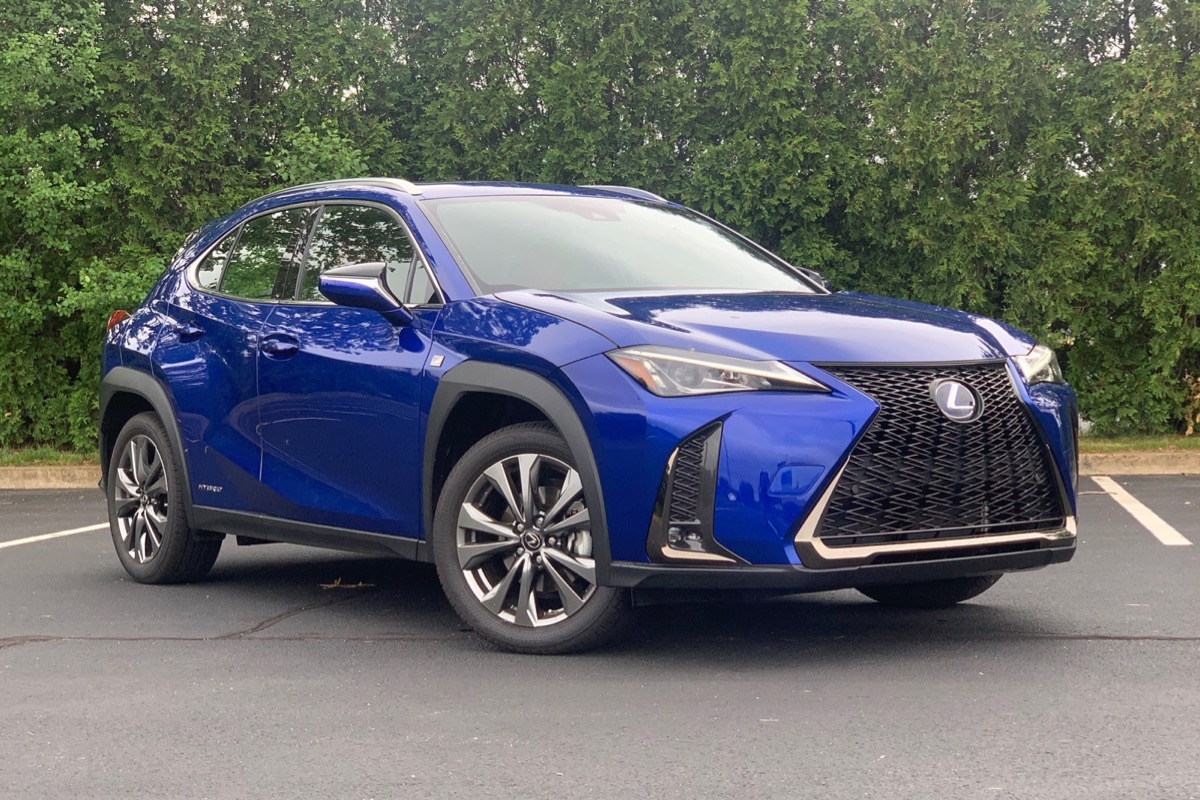 Looking for a New Lexus UX Hybrid in your area?

The Lexus UX Hybrid has lackluster acceleration and a frustrating infotainment system, but also has an incredibly refined, efficient ride and standard all-wheel drive. 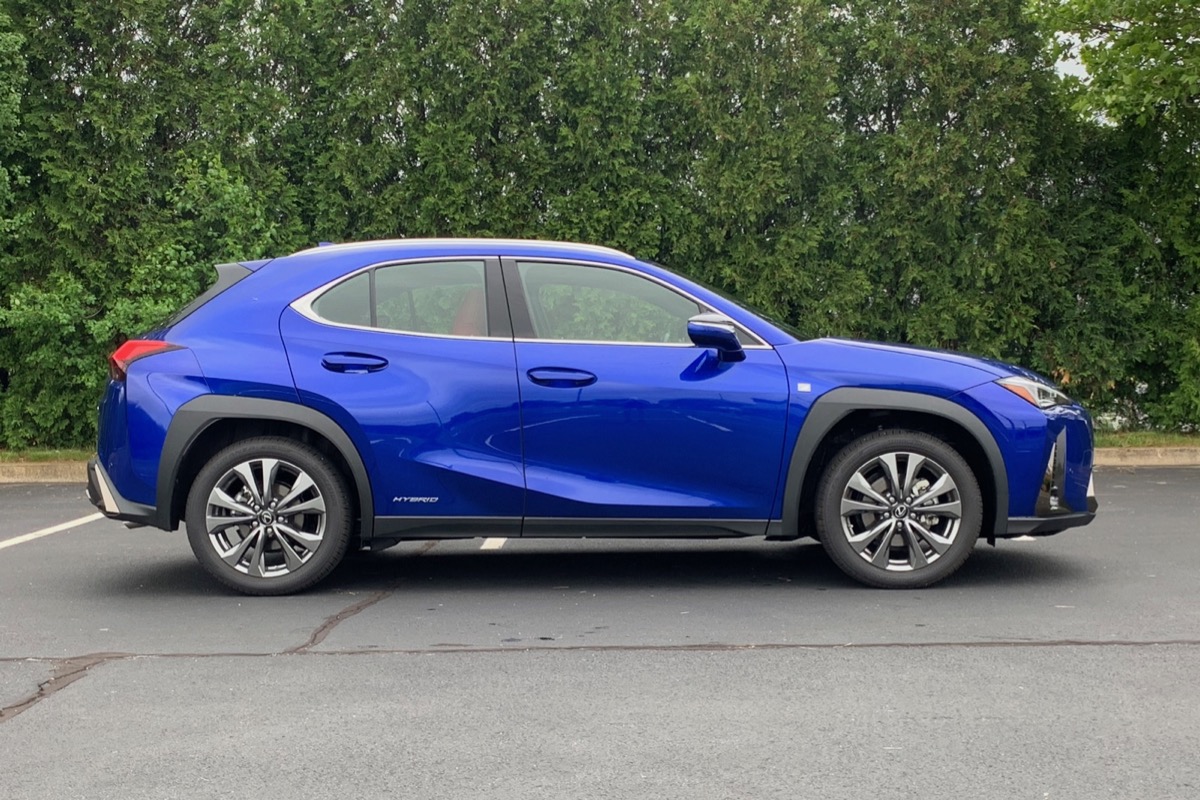 The glossary of automotive terminology is quite elastic. Words like sedan, coupe, and SUV were once used to describe very specific types of vehicles. But as automotive genres have blended, so have the definitions of these words. It’s how Porsche and Mercedes-Benz can call four-door SUVs with limited cargo space “coupes.” And it’s how the 2021 Lexus UX Hybrid can be generously described as a sport utility vehicle.

The UX is considered a crossover SUV but, in reality, it’s a hatchback with a slight lift and added plastic wheel arches. You won’t be off-roading in the UX. Heck, even certain unpaved roads will be too much for the UX. But the smallest Lexus crossover is an incredibly refined commuter, and the hybrid is an efficient machine for daily driving. The UX also has underwhelming acceleration and is in desperate need of an infotainment system update. But the luxury hybrid small SUV segment is a small one. Will this extreme niche insulate it from its deficiencies? Read on to find out. 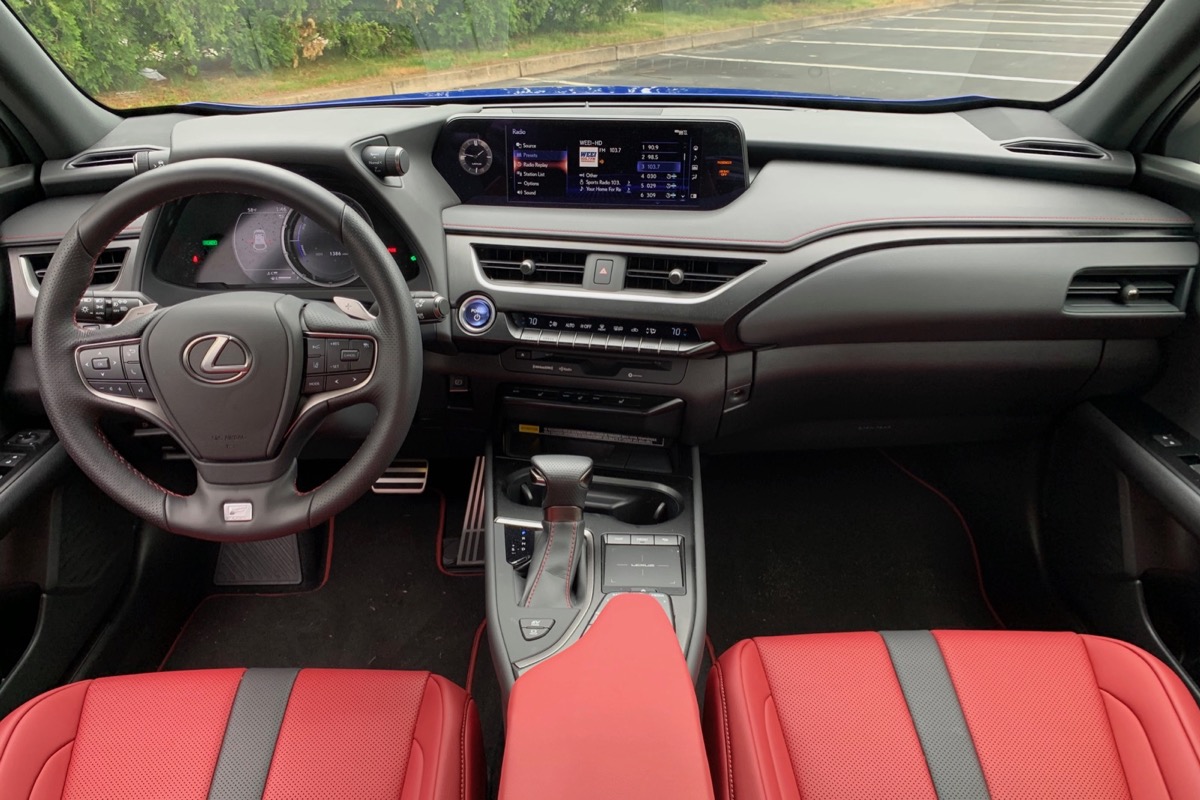 Introduced in 2019, the Lexus UX is still relatively young, and is one of the newest members of the Lexus lineup, which is surprising, considering the quickly growing popularity of subcompact SUVs. It was a glaring omission in the Lexus lineup, and like nearly every luxury brand’s first attempt in the segment, there are obvious shortcomings (See: first-gen BMW X1, Mercedes-Benz GLA).

The UX rides on the same crossover platform as the confusing Toyota C-HR and recently announced Toyota Corolla Cross. Where the Corolla Cross appears to be a promising small SUV with decent cargo space (for its size), the UX is way down on cargo space. Also, the timing of its 2019 debut means the UX just missed getting the new touchscreen infotainment system that debuted in the updated Lexus IS sedan. Hopefully, Lexus does a 2022 update that tweaks the infotainment system. Even if so, it still can’t fix the UX's lack of cargo space, though Lexus makes up for it with standard all-wheel drive (AWD) on the UX Hybrid (a non-hybrid powertrain is also available, but not with standard AWD).

The UX has the “spindle” grille used on other Lexus models. You’ll find it on every single vehicle in the lineup, in fact, and we’ve sort of become desensitized to it. The back of the UX drops off in an awkward manner, especially with the pronounced fender flares. It’s essentially a compact hatchback that’s dressed as a small SUV.

Inside, the UX has a refined interior, with solid build quality and plenty of soft-touch materials. The layout is largely sensible, with the exception of the standard infotainment system. Lexus uses a remote touchpad to control the screen, and as we’ll describe in the Tech section, it’s pretty awkward to use. This one feature is in desperate need of an update.

We drove the F Sport, which is almost hard to take seriously. Luxury automakers have made a “sport line” trim available on some of the most toothless cars, but this might be the most egregious. It comes with unique exterior styling, unique wheels, and instrumentation that’s inspired by the LC sports car. The F Sport adds active sound control, steering-wheel-mounted paddle shifters, a sport-tuned suspension, and unique sport seats. Our particular test model had bold red seats, which were definitely eye-catching. Too bad the styling is not backed up by the car’s performance.

The Black Line Special Edition is new for 2021. It claws back some of the content of the Luxury trim and is outfitted closer to the base trim. Instead, it adds a number of dark accents and contrasting blue stitching and blue seat belts. 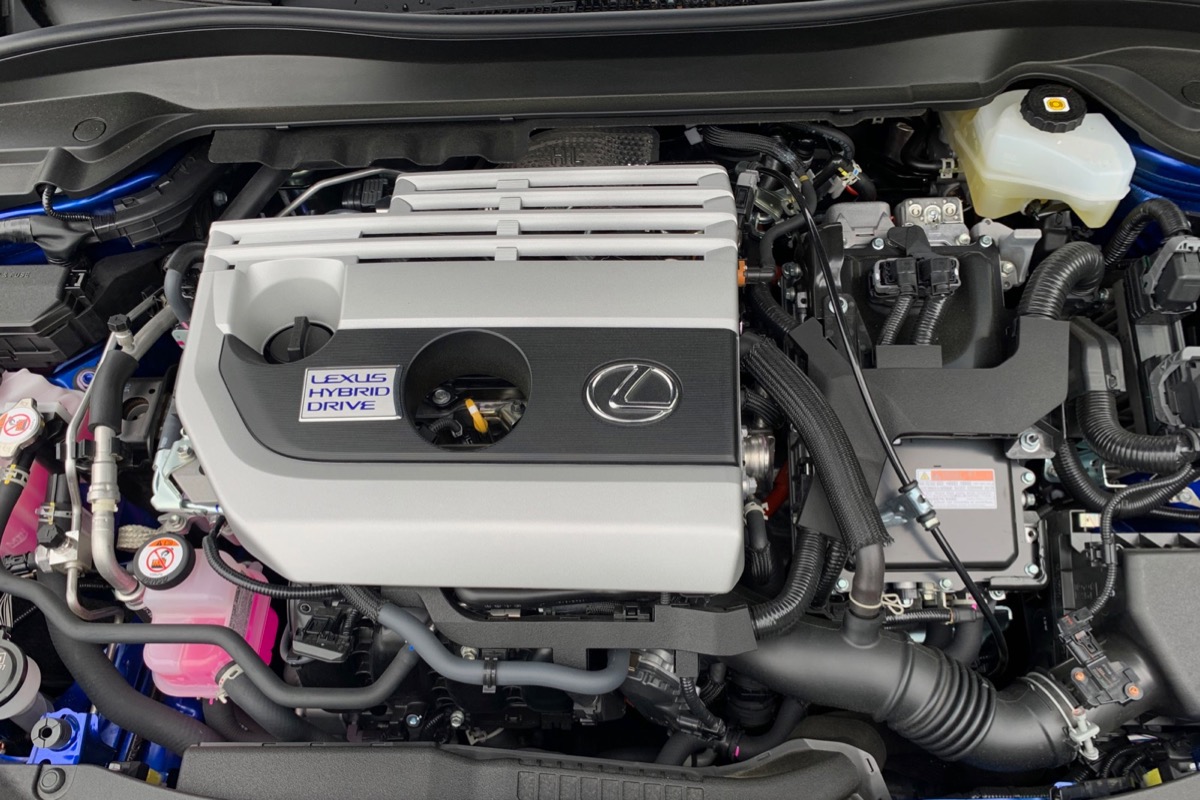 No matter what trim you select, the UX 250h is powered by a 2.0-liter four-cylinder engine. It is paired with two electric motors to put out 181 combined horsepower. A continuously variable transmission (CVT) routes power to all four wheels. The CVT features a manual tap-shift function with 10 simulated “gears.” It also has a drive mode select dial on the right side of the instrument panel binnacle. It includes Sport, Normal, and Eco drive modes. Selecting Sport mode in our F Sport model changes the instrument panel layout. This is inspired by other Lexus “F” cars like the IS F, and RC F, but it’s just window dressing for a slow crossover.

The UX hybrid has decent pickup around town and will jump away from a stop nicely. When you are trying to get up to highway speeds, the engine makes a lot of noise, but there’s not much action. The car takes its sweet time to accelerate at higher speeds. It's clearly designed for mall parking lots and suburban neighborhoods.

Despite this lack of acceleration, the UX was incredibly pleasant to drive. It soaks up bumps in the road, but is still level and composed through hard corners. This is no performance vehicle by any stretch, but it can certainly go around a turn with decent momentum. You’ll need that ability to carry momentum since it’s so hard to build up speed again. The plus side to this lack of power is impressive fuel economy, which we will touch on later. 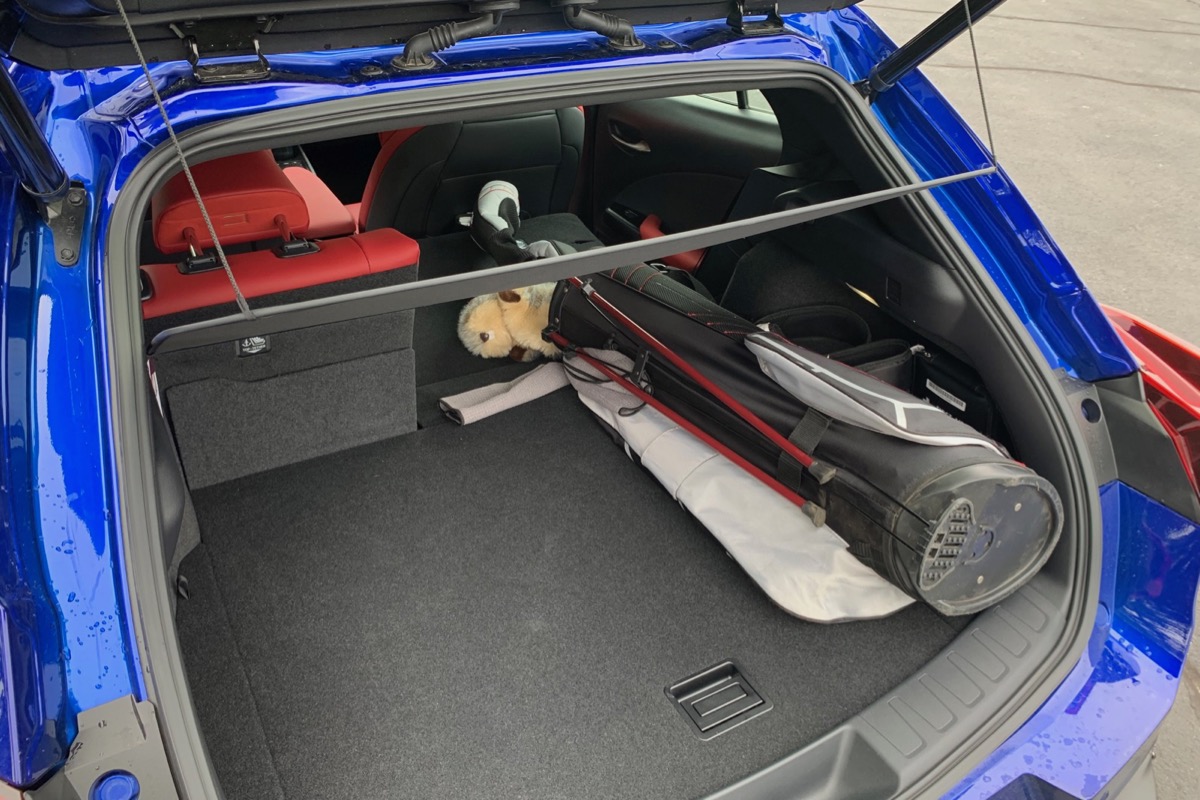 The UX has very little rear-seat space, even when the seats are slid forward. If a person of even average height occupies the front seats and slides it back to a comfortable position, rear-seat legroom all but disappears.

As mentioned, this is a small commuter hatchback with a lift, and as such, the front seats are the most comfortable places to be. The driver’s seat slides back a considerable amount. It provides a ton of legroom and average headroom. Despite how far back the seat can slide, the steering wheel does not telescope far enough to go with it. That means a taller driver is either stretching their arms or slightly cramming their legs when trying to get into a comfortable seating position. Once such a position is found, the seats are very comfortable, even for long trips. 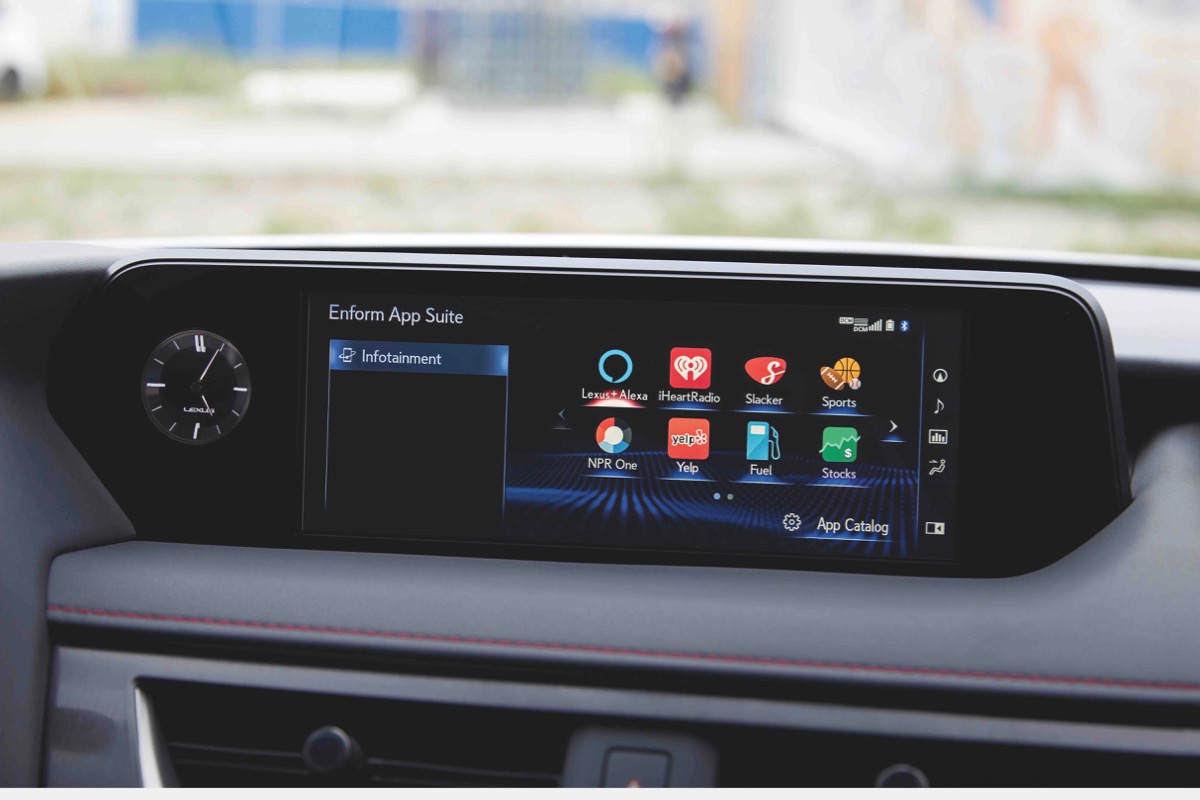 As mentioned, the UX features the Lexus Remote Touch infotainment system. A touchpad in the center console down by the shifter operates the various icons and menus on the screen. There is some logic to it all, but there’s also a steep learning curve. Volume and tuning are done by rollers adjacent to the touchpad. There are helpful Map, Menu, and Back buttons should you get (easily) lost or confused in the various pages.

The screen does support Apple CarPlay and Android Auto, but these systems are optimized for touchscreens. Cycling through the various CarPlay menus via a touchpad is frustrating at best. At worst, it’s dangerously distracting.

The recently-introduced 2021 Lexus IS sedan saw the addition of a touchscreen to the brand's infotainment system, but even in that updated version, the remote touchpad remains. As easy as it is to regard leaving the touchpad as stubbornness, it’s actually good to have multiple options for controlling the infotainment system. All this is to say, Lexus needs to bring this new infotainment system from the IS to the UX as soon as possible. Lexus announced an updated version of the larger NX crossover with the new system. This update has to go brand-wide ASAP.

On the plus side, the Lexus premium stereo system is fantastic. Lexus has long championed its in-house stereo systems and this one delivers. It is crisp and powerful in both high-volume and low-volume settings. This is aided by the UX’s extremely quiet cabin. 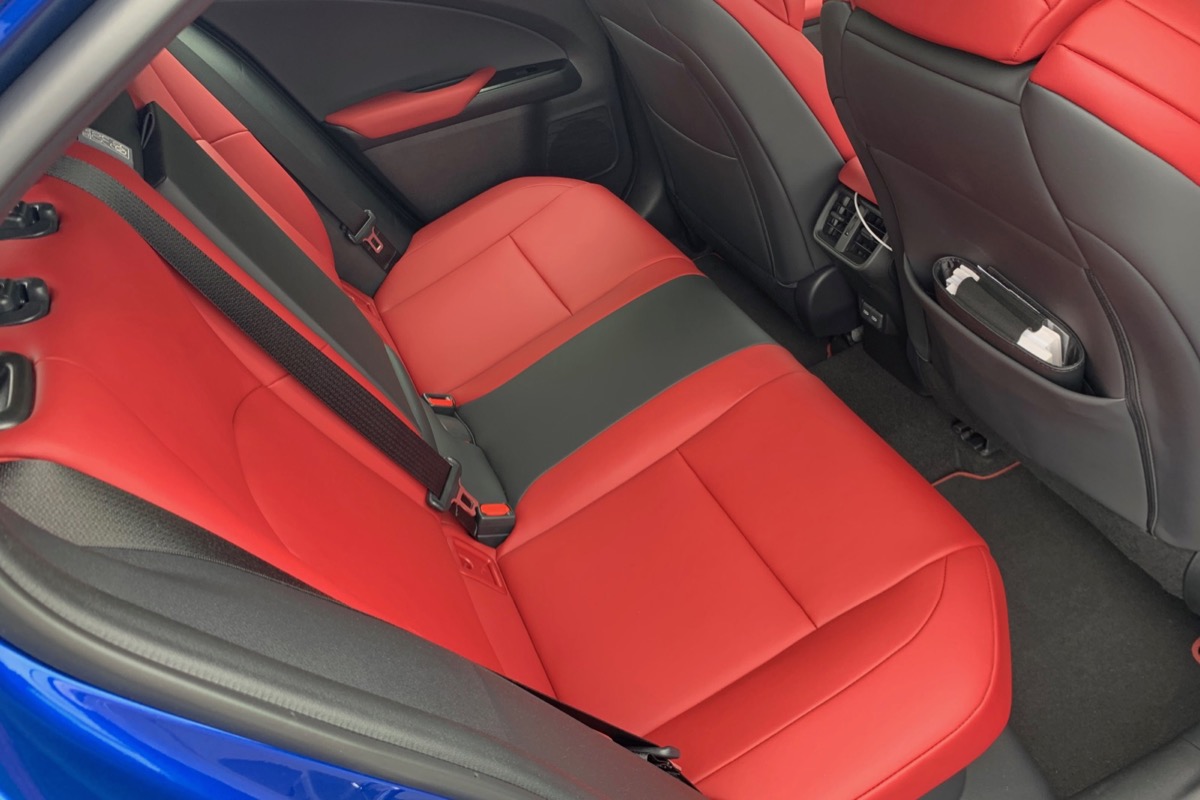 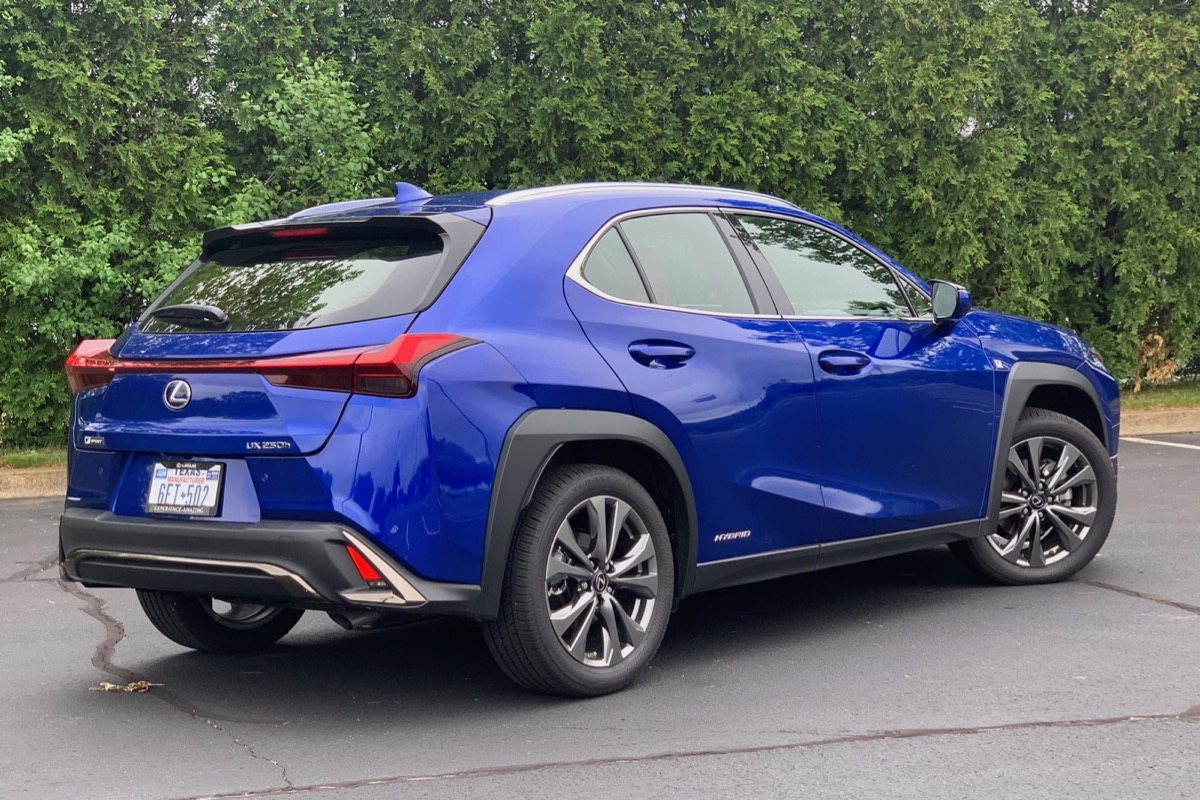 The Lexus UX Hybrid is very efficient as SUVs go. EPA fuel economy come in at 41 mpg city, 38 mpg highway, 39 combined. In our week of combined city and highway driving with the UX 250h AWD, we observed an average fuel economy of 41.2 mpg. And that was with plenty of driving with a heavy foot and Sport mode activated.

The word to remember with the Lexus UX Hybrid is “refinement.” It may not have much power and it may lack much usable cargo space, but the UX is incredibly refined. This applies to both the handling characteristics and the seating and cabin. As long as you don’t have a need for speed and don’t plan on loading in too many passengers or too much gear, the UX will be a perfectly comfortable place from which to commute.

Bob Such an underwhelming offering. No idea why you would buy this unless you just want the badge.

Have you driven a 2021 Lexus UX Hybrid?
Rank This Car

Enter your zip to see incentives for a new UX Hybrid in your area.

Looking for a Used UX Hybrid in your area?