Looking for a New Lexus GX in your area?

This SUV is a throwback, in both good ways and bad. 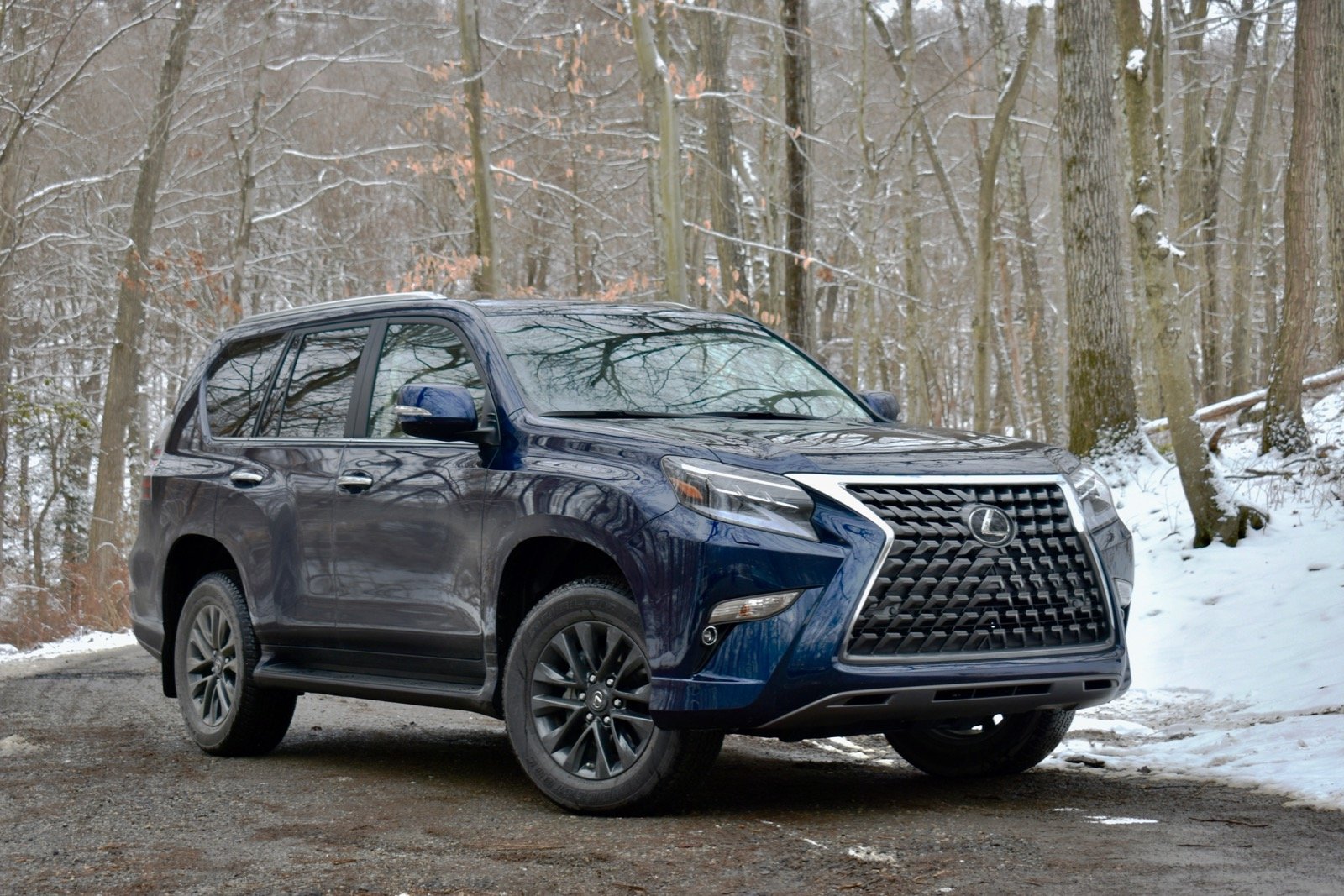 Most modern SUVs are really car-based crossovers—lifted station wagons, or minivans without the sliding doors. That’s not the case with the 2021 Lexus GX 460.

Like the mythical Loch Ness Monster, the GX is a creature that time forgot. It’s one of the last SUVs with truck-like body-on-frame construction and true off-road capability. That’s because the GX is actually a rebadged Toyota Land Cruiser Prado (a smaller version of the iconic Toyota Land Cruiser not sold in the United States), and is related to the Toyota 4Runner. It’s also genuinely old: the current generation dates back to the 2010 model year, and Lexus has kept it in production with some updates of styling and tech over the years.

That makes the GX a fairly odd proposition on the new-car market. It has the off-road capability, not as a lifestyle statement, but because that’s what was still expected of SUVs when it was launched. The GX sits between the RX and LX in Lexus’ lineup but has little direct competition. Its only real rival is the much newer Land Rover Discovery.

For the 2021 model year, the GX gets some minor updates, including a new Premium Plus Package, and acoustic front side glass. Lexus continues to offer only the GX 460 model, with a single powertrain option, standard four-wheel drive (4WD), and three trim levels: base, Premium, and Luxury. Our test car was the midlevel Premium version. 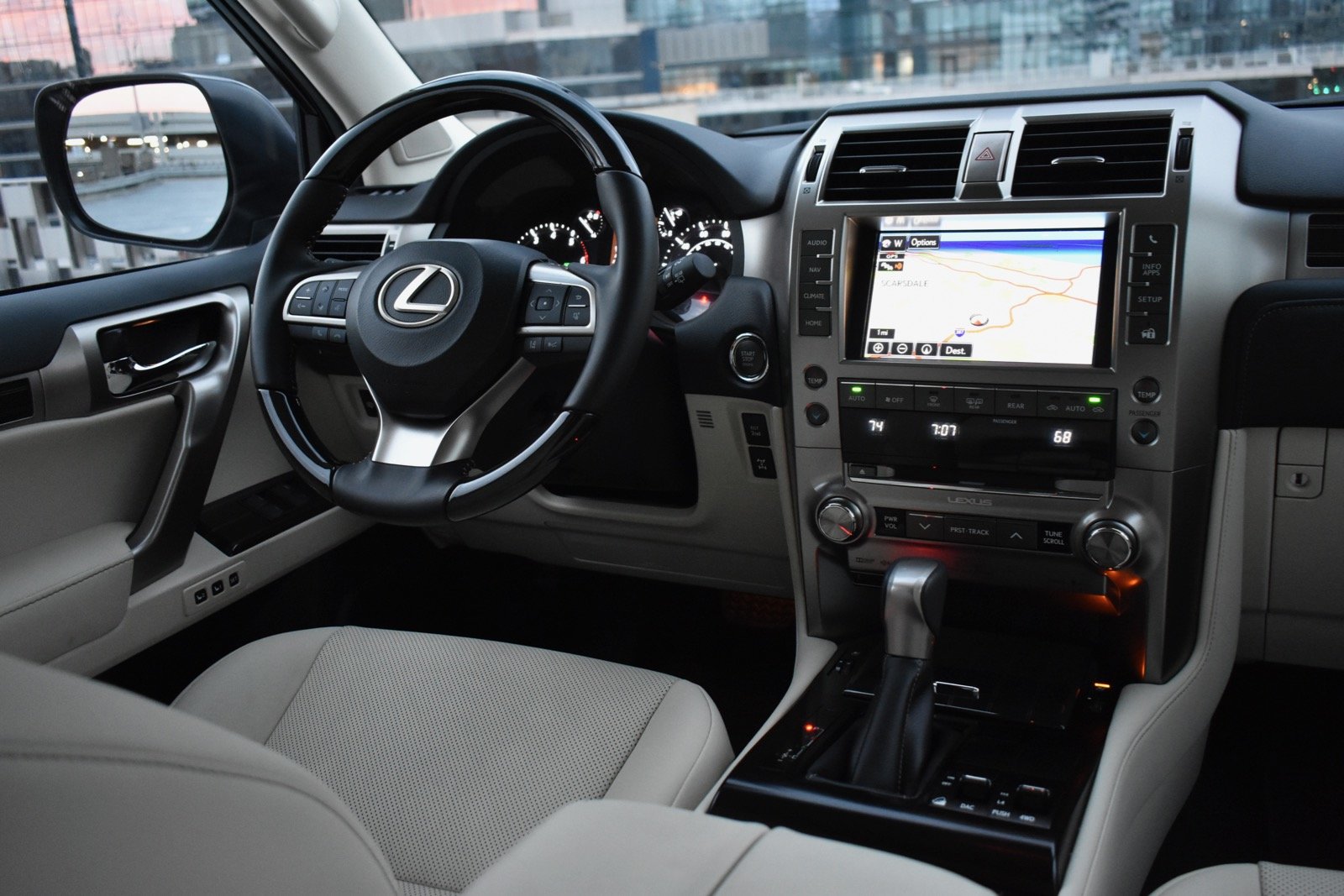 The Lexus GX 460’s styling is a product of its long time on the market. It still has the same basic body shell from a decade ago, with a few updates that have accumulated over the years. The GX got Lexus’ trademark spindle grille for the 2014 model year, and that grille was then updated for the 2020 model year, with a new, textured insert. That year’s update also brought new triple-beam LED headlights.

Considering that the GX wasn’t originally designed around the spindle grille (and that the grille originated on the sleek Lexus LC coupe), the styling is remarkably coherent. The grille still looks massive, but Lexus is far from the only offender in that area (we’re looking at you, BMW X7). The GX’s tough, aggressive look should appeal to SUV shoppers, and it’s genuinely distinctive.

While Lexus has done a good job of keeping the exterior styling up to date, the interior did not feel up to the standards of a modern luxury SUV. Our Premium test car’s wood trim looked and felt like molded plastic, and there was plenty of actual plastic as well. At least you get standard leather upholstery, with semi-aniline leather on the range-topping Luxury trim level. 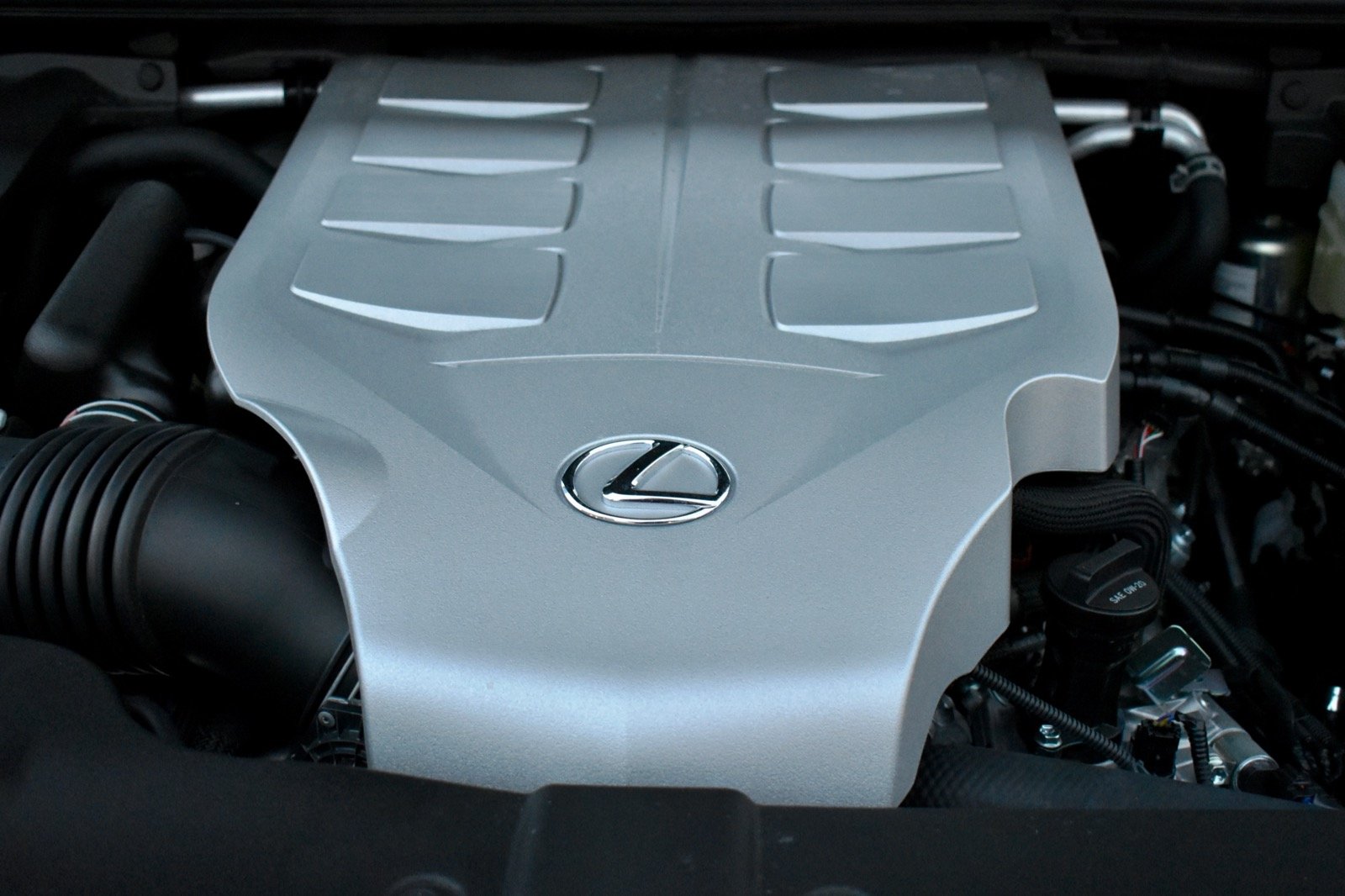 Lexus keeps it simple in the powertrain department. The only available engine is a 4.6-liter V8, which produces 301 horsepower and 329 pound-feet of torque, and is coupled to a six-speed automatic transmission.

On the road, the GX 460 was a throwback to a different generation of SUVs—but not in a good way. The V8 engine had plenty of grunt when moving away from a stop, (zero to 60 mph takes 7.8 seconds, per Lexus) and a nice NASCAR bellow at wide-open throttle. However, the GX’s 5,130 pounds made their presence felt at higher speeds. Despite the eight-cylinder engine, merging and overtaking maneuvers had to be carefully planned.

Similarly, bringing this SUV to a stop required a little more advanced planning than the average modern vehicle. In corners, low grip and body roll were the order of the day. Ride quality was typical of a body-on-frame vehicle, meaning it wasn’t very good. While our Premium test car lacked the adaptive suspension that comes with the Luxury trim level, it’s still hard to totally civilize the ride when the body and frame are separate pieces. That’s why most other SUVs now feature unibody construction.

This was once typical of the SUV driving experience, but newer models are expected to handle, accelerate, and brake like regular cars, despite their added weight and higher centers of gravity. The GX doesn’t pretend to be anything other than a traditional SUV and needs to be driven accordingly.

However, most other modern SUVs can’t match the GX 460 in off-road capability. The GX is equipped with a Torsen center differential that normally splits torque 40/60 front to rear, but can also be fully locked for a 50/50 front/rear torque split. The standard 4WD system also has a low range for crawling along on off-road trails, and the GX sports several driver aids, including hill-descent control and hill-start assist.

Lexus quotes a respectable 8.1 inches of ground clearance, and approach, departure, and break-over angles of 21 degrees, 23 degrees, and 21 degrees, respectively. However, the Land Rover Discovery beats the Lexus in most of those metrics, in part because it’s available with air suspension that can raise the ride height for off-roading.

The GX 460 has a maximum towing capacity of 6,500 pounds (when properly equipped), and the stability control includes a trailer-sway control function. 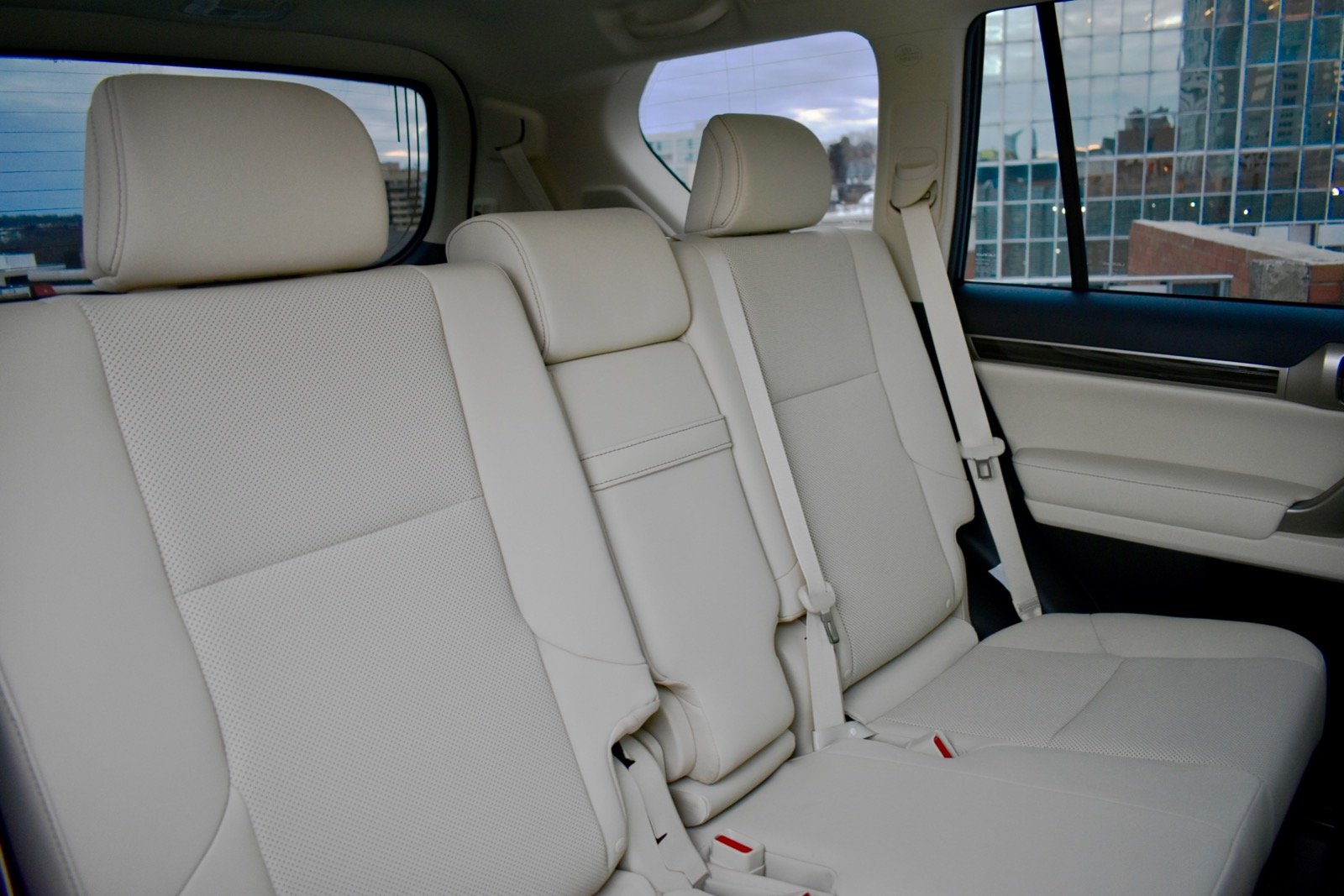 Like the driving experience, the GX's interior ergonomics betray its age. The upright dashboard and high center console leave very little legroom, and the steering wheel was positioned at an odd angle which, combined with the tall seating position, made us feel like we were driving a bus. Premium models get a new heated wood-trimmed steering wheel for 2021, but that wood trim means the heating elements don’t go all the way around the wheel.

The dashboard shape, combined with the GX’s boxy profile, produced excellent outward visibility. The low side glass in particular came in handy when pulling into parking spaces, and would probably be helpful off-road as well. However, forward visibility was limited due to the tall hood.

The center-console storage bin is fairly small, as are the cupholders and in-door bottle holders in all three rows. In the second row, cupholders also take up a lot of the space in the fold-down armrest. The one bright spot is the array of buttons and knobs for everything from climate control to the seat heaters. They’re much easier to use than the touchscreen-based controls in many other luxury SUVs. Second-row occupants get climate controls as well.

The GX comes standard with three rows and seating for seven (the second-row bench can also be swapped out for captain’s chairs). A power-folding third row available on the Premium with the new-for-2021 Premium Plus Package, and standard on the Luxury trim level. The Land Rover Discovery doesn’t offer a standard third row but, when so equipped, it does have more headroom and legroom than the Lexus third row. In both SUVs, however, the third row is best reserved for children. In addition, accessing the GX’s third row wasn’t easy, as the second-row seats got in the way even when folded and moved forward.

Lexus only quotes cargo space with the second and third-row seats folded which, at 64.7 cubic feet, is substantially less than the Discovery’s 73.0 cubic feet. While rear seats erode cargo space in all three-row vehicles, they completely eliminate it in the GX. With the third row up, only a narrow sliver of cargo area is left. It’s best to think of the GX as a two-row SUV and reserve the third row for occasional use only. 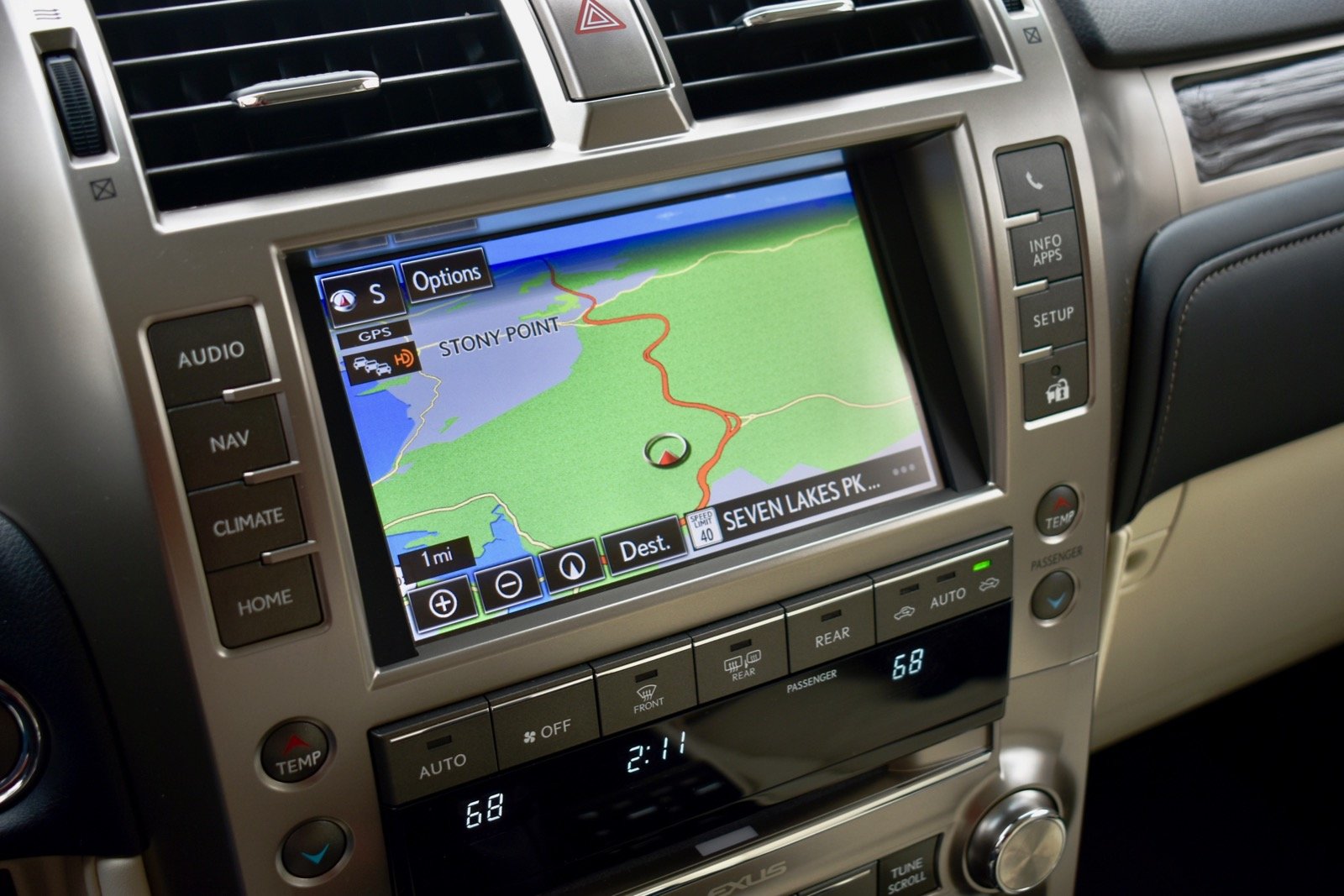 Not surprisingly for a decade-old design, the GX is pretty light on tech features. Bluetooth, Amazon Alexa, and Google Assistant connectivity are standard, but Apple CarPlay and Android Auto compatibility aren’t available. Two USB ports for each of the first two rows are standard, but the third row doesn’t get any. A 17-speaker Mark Levinson audio system is also available.

The standard infotainment system hardly qualifies as tech. The touchscreen’s graphics looked they were from the 1990s, and the system didn’t offer much in the way of functions. Below the main screen is a display for time and temperature, which uses a seven-segment format like a digital clock. That’s not what you want to see in a luxury car in 2021.

The good news (unless you’re a tech enthusiast), is that you don’t really need to use the touchscreen. Lexus included analog controls for nearly everything, including large shortcut buttons for the screen’s menus. While this is a fairly primitive interface for a vehicle costing this much, it’s a refreshing antidote to the screen-centric approaches of most other new luxury SUVs. 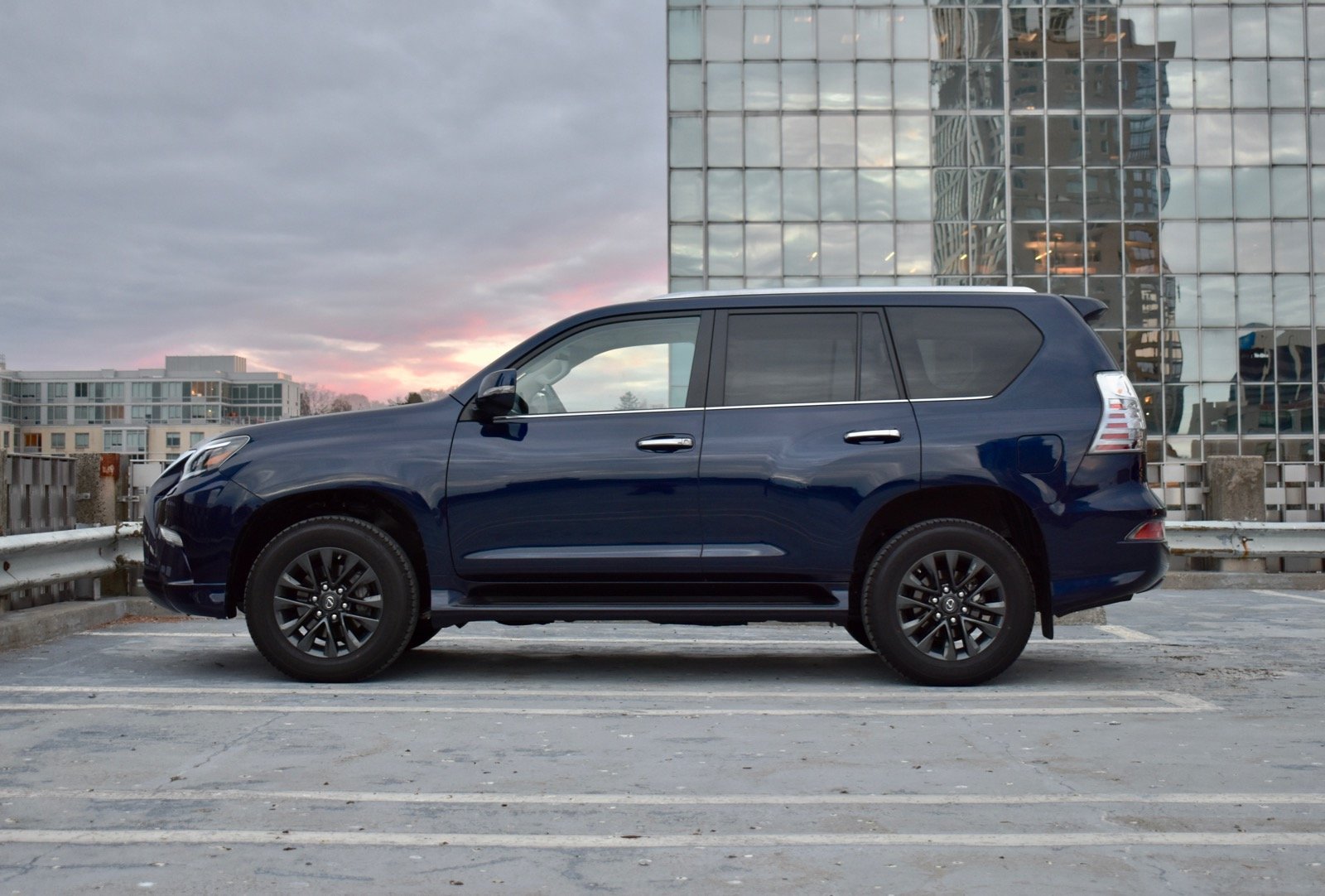 However, the GX 460 misses out on some of the safety features available in other Lexus models, and even non-luxury Toyota models. For example, the GX doesn’t get traffic-sign recognition or Lane Tracing Assist automated lane centering. 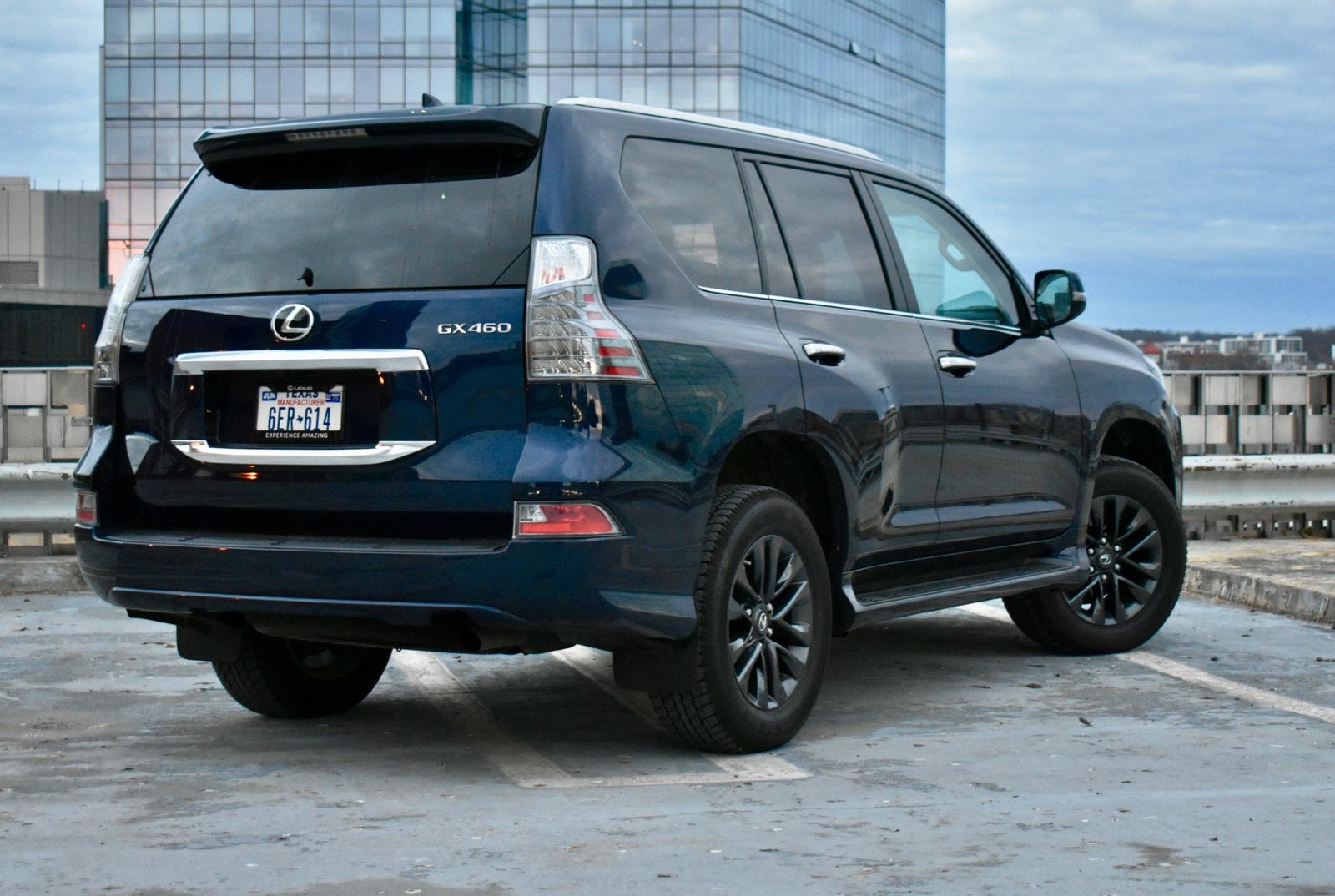 A look at the GX’s EPA fuel-economy ratings will remind you why SUVs have a reputation as gas guzzlers. The GX is rated at 16 mpg combined (15 mpg city, 19 mpg highway). We were at least able to match the combined rating in mixed conditions.

The GX has more character than the average SUV, but it’s hard to recommend it as a new-car purchase. The things it does well—towing and off-roading—aren’t as relevant as the things it doesn’t do well. The Lexus lags on interior space and functionality, gets abysmal fuel economy, and drives like the leather-lined truck it is. The GX is also a poor value, lacking many tech and driver-assist features that are standard on much cheaper vehicles. Lexus also makes most of the off-road features part of an option package—and only for the highest trim level.

If all you want is a midsize luxury SUV, something more conventional like an Audi Q7, BMW X5, or Mercedes-Benz GLE would be a better choice. If you want three rows of seats, check out the Volvo XC90 or Lincoln Aviator. If you want off-road capability, the Land Rover Discovery is the better option. Even if you must have a GX 460, consider looking for a used one. Lexus has an excellent reputation for reliability, and the GX hasn’t changed much over the years, anyway.

Enter your zip to see incentives for a new GX in your area.

What Is The Correct Information?

I was sent to the car dealership because you sight did not have the interior seats color and that it is a premium not a basic, and that (I don't know where you you are getting you information from o...