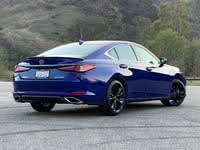 Looking for a New Lexus ES in your area?

Now that Lincoln has banished the MKZ to the dustbin of history, you could say the 2021 Lexus ES competes in a class of one. And there is no better way to dominate than to have no direct competitors. 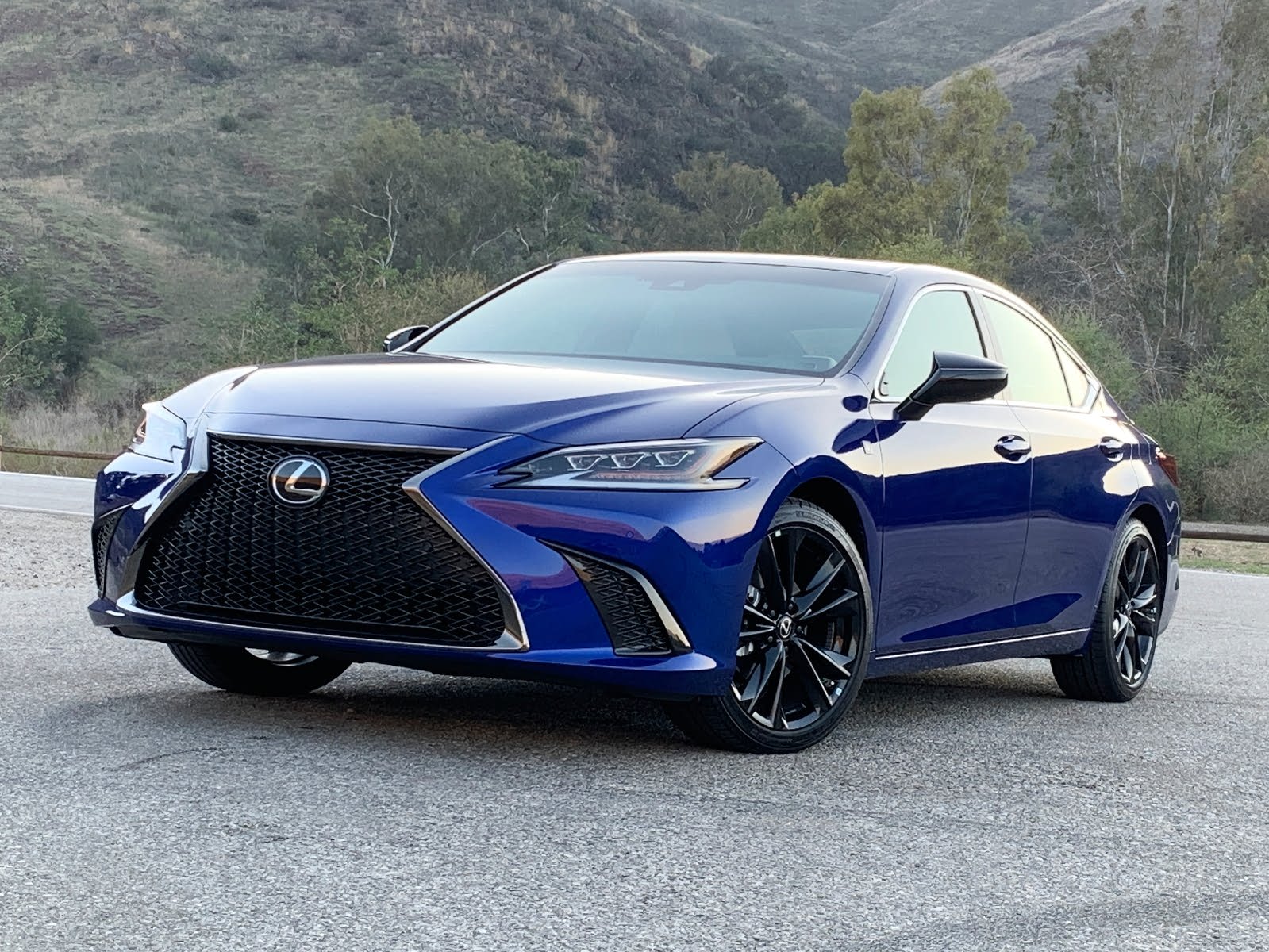 When you think of a Lexus ES, you think of a cushy, comfortable, and reliable car that your parents or grandparents might like. The roomy and quiet cabin, the relaxed driving demeanor, and the relatively affordable price all hearken back to the original Lexus mission. And these stereotypes about the car are accurate. But in F Sport trim, with the 3.5-liter V6 engine, the 2021 Lexus ES 350 shows a different side of its presumed personality. 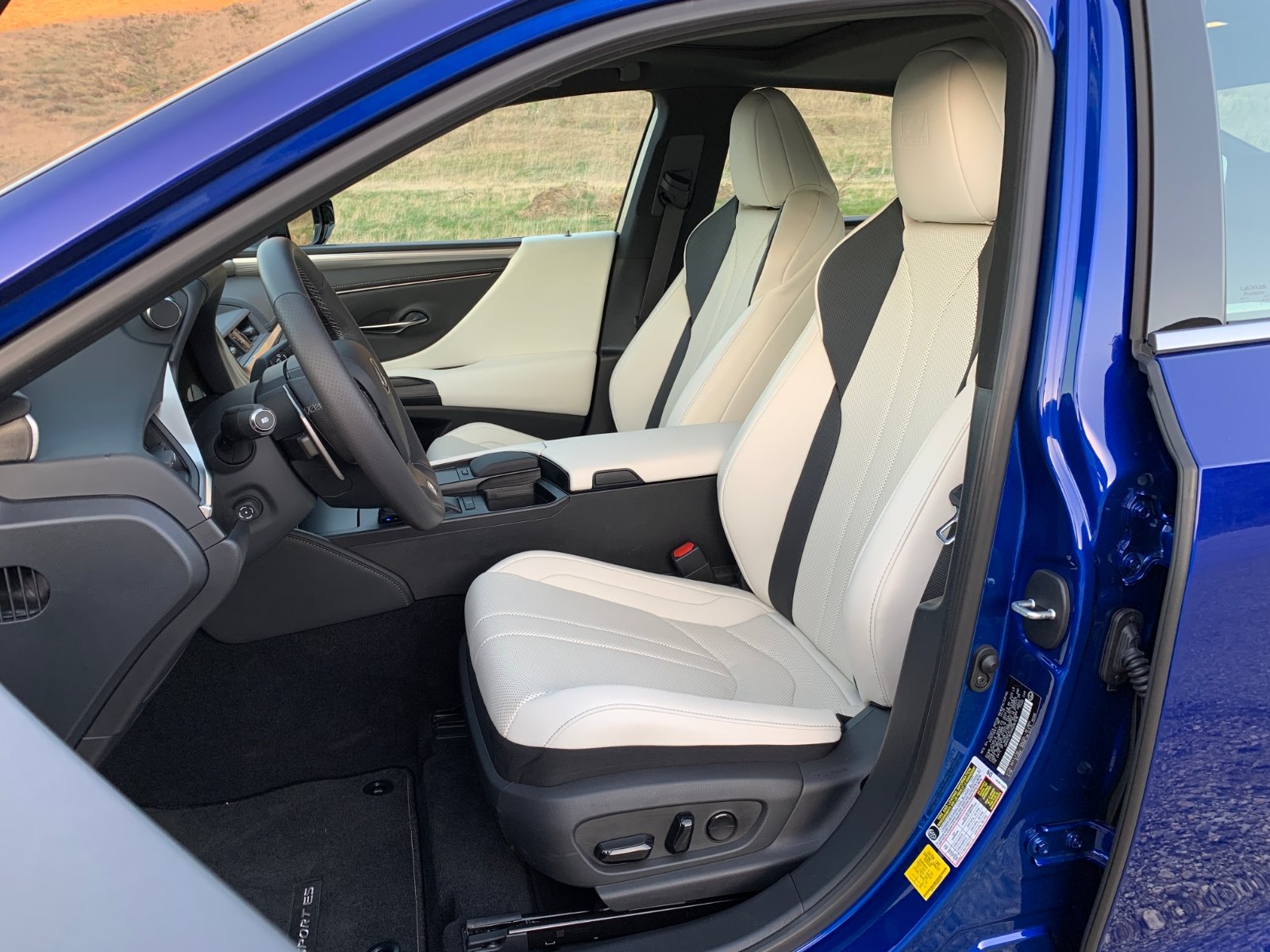 For the 2021 model year, the Lexus ES lineup expands to include the new ES 250 series of cars. They all have a 2.5-liter four-cylinder engine and standard all-wheel drive (AWD), and they cost the same as an equivalent ES 350 with a 3.5-liter V6 and front-wheel drive (FWD). Standard, F Sport, Luxury, and Ultra Luxury trim levels are available for both the ES 250 and ES 350.

Separately, Lexus offers the ES 300h, which is the gas-electric hybrid version of this sedan. It commands a premium of $1,910, it provides a significant gain in fuel economy, and it comes in Standard, Luxury, and Ultra Luxury trim.

In addition to the new ES 250 series, Lexus makes blind-spot monitoring and rear cross-traffic alert standard on all versions of the car except the standard trim. A new limited-production Black Line Special Edition version of the ES 350 also debuts this year, and it’s the car you see in the photos.

In terms of design modifications, F Sport trim adds 19-inch wheels with a gray finish, unique front and rear styling details, a rear spoiler, aluminum interior trim, F Sport instrumentation, and a black headliner. The Black Line Special Edition comes in black, white, or the Ultrasonic Blue Mica 2.0 paint you see in the photos. Black wheels, black side mirrors, a black rear spoiler, and a black and white interior are also part of the package. Lexus will make just 1,500 examples, each with a matching two-piece set of Zero Halliburton luggage.

Like other Lexus models, the ES’s dramatic grille takes some acclimation. But otherwise, this is a terrific-looking sedan, long, lean, and artfully detailed. With its black grille, toned-down chrome, and larger wheels, F Sport trim is especially appealing.

The test car’s black and white interior offered striking contrast entirely in tune with the dramatic cabin design. The ES might share a platform with the Toyota Avalon, but with quality materials and high design throughout, it’s a Lexus through and through. 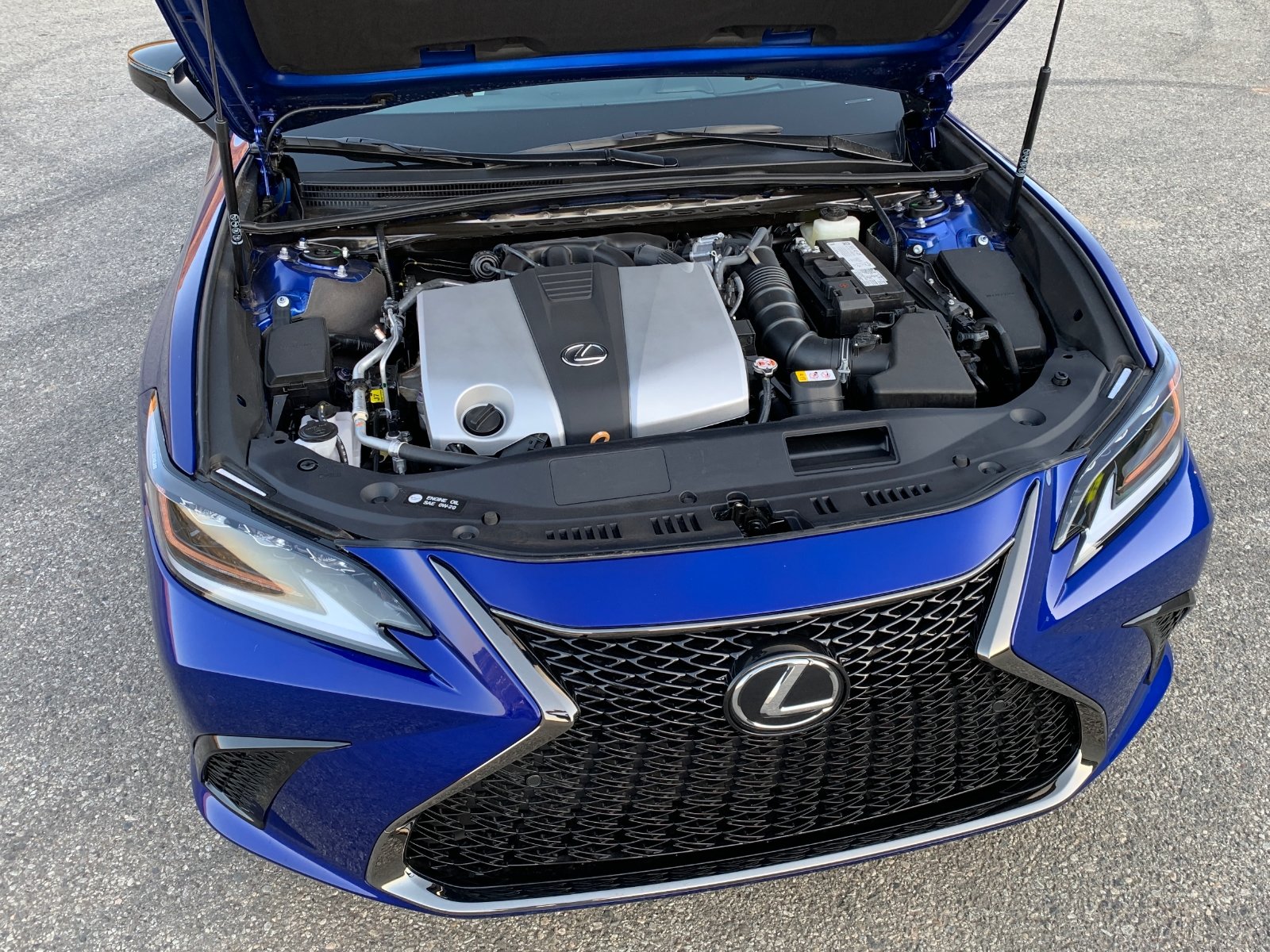 Every Lexus ES 350 has a 3.5-liter V6 engine generating 302 horsepower and 267 pound-feet of torque. An eight-speed automatic transmission delivers the power to the car’s front wheels, and drivers can choose between Normal, Eco, and Sport driving modes.

Lexus adds Sport+ and Custom driving mode selections to the powertrain when you opt for the adaptive damping suspension. Our F Sport test vehicle had this upgrade.

Lexus says the ES 350 accelerates to 60 mph in 6.6 seconds, and the Environmental Protection Agency (EPA) gives the car a fuel economy rating of 25 mpg in combined driving. We averaged 22.9 mpg on our testing loop.

From behind the steering wheel, the ES 350 F Sport feels quicker than Lexus’s claimed acceleration time. Perhaps the fact that it’s easy to break the front tires loose extends the amount of time necessary to reach that velocity. Indeed, the ES 350 F Sport is begging for a torque-vectoring AWD system along the lines of the Acura TLX’s Super Handling All-Wheel Drive (SH-AWD).

During testing, we used Normal and Sport modes, with a short mountain run in Sport+ mode. Discernable differences exist between the three, but the overall impression is one of unexpected competence and, in the two Sport modes, genuine driving enjoyment.

Dynamically, the ES 350 F Sport is a much better car than most people will ever realize. It’s a little louder inside than you might expect, and quicker steering response would be nice. Still, the firm ride, flat cornering stance, and overall athleticism are remarkable for a car with the ES’s reputation as a comfy cruiser. Still, this is, at best, a sporty sedan and not an outright sports sedan.

This is as it should be. The official Lexus sports sedans are the new 2021 IS 350 F Sport and the upcoming 2022 IS 500 F Sport Performance. The Lexus ES need not fill that role, and it’s better off for it. 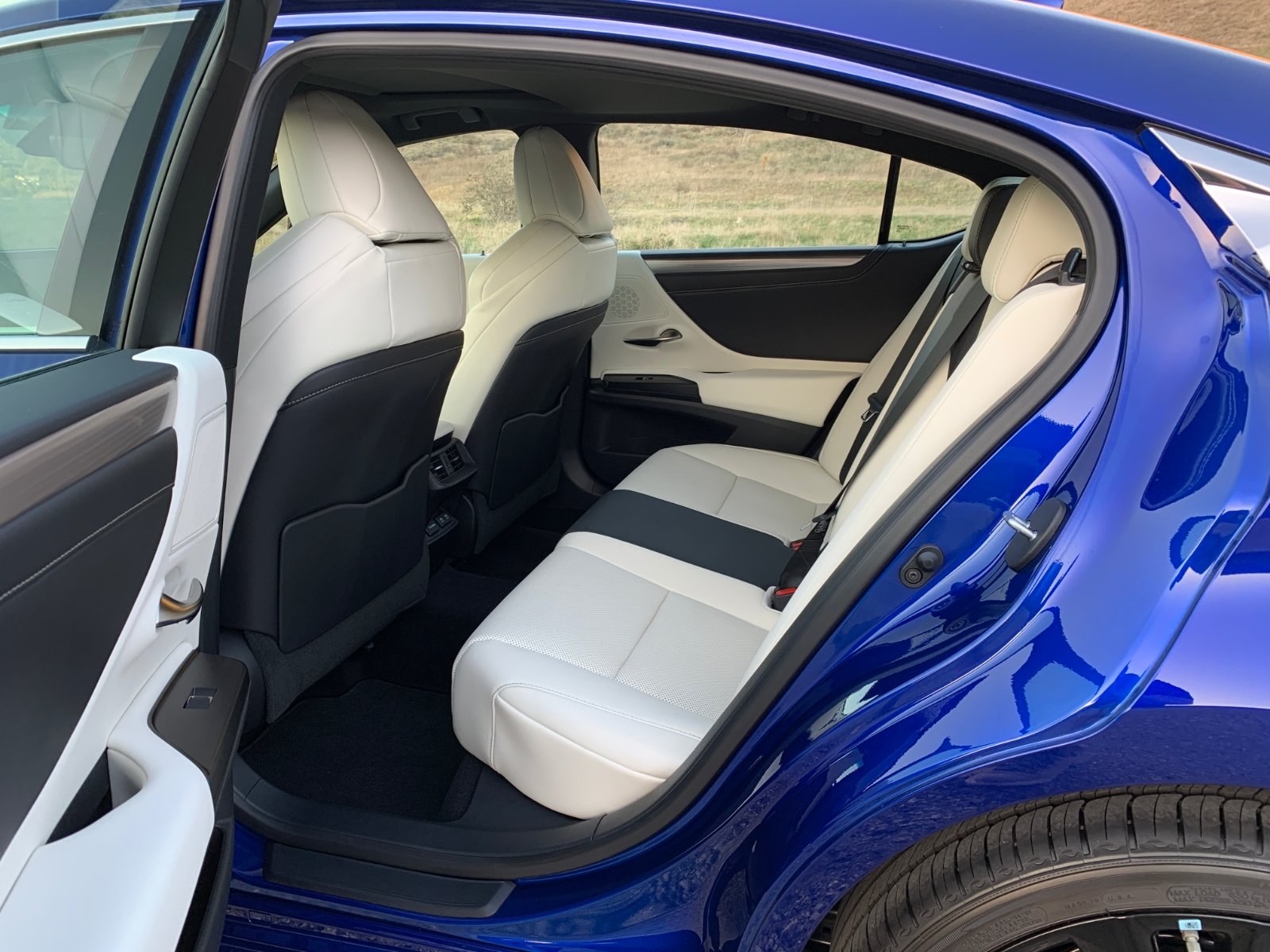 For the most part, the Lexus ES does not suffer for its daring interior layout. It’s unusual but still useful, with a single, glaring exception. But we’ll get to that in due time.

The ES 350 F Sport has sport-bolstered front seats with 10-way power adjustment, heating, and ventilation. The NuLuxe synthetic leather looks and feels like the real deal, and the bottom cushions are long to provide excellent thigh support. Comfort is easy to come by.

Rear-seat passengers are equally happy. The ES is an accommodating sedan, and the back seat supplies good foot and legroom. The bottom cushion supports your legs, the backrest has the perfect angle for a comfortable seating position, and Lexus provides rear air conditioning vents and an available power rear window sunshade. All that’s missing is a panoramic glass roof.

Outward visibility is excellent thanks to relatively thin windshield pillars and large side mirrors. Storage is plentiful, if oddly configured. There are lots of nooks and crannies rather than wide trays and large bins. And the wireless smartphone charger is tucked under the center armrest.

The trunk measures 13.9 cubic feet, which isn’t much more than a Toyota Corolla. The test car’s optional hands-free power trunk takes a kick under the bumper to open and load and another kick to close after unloading. 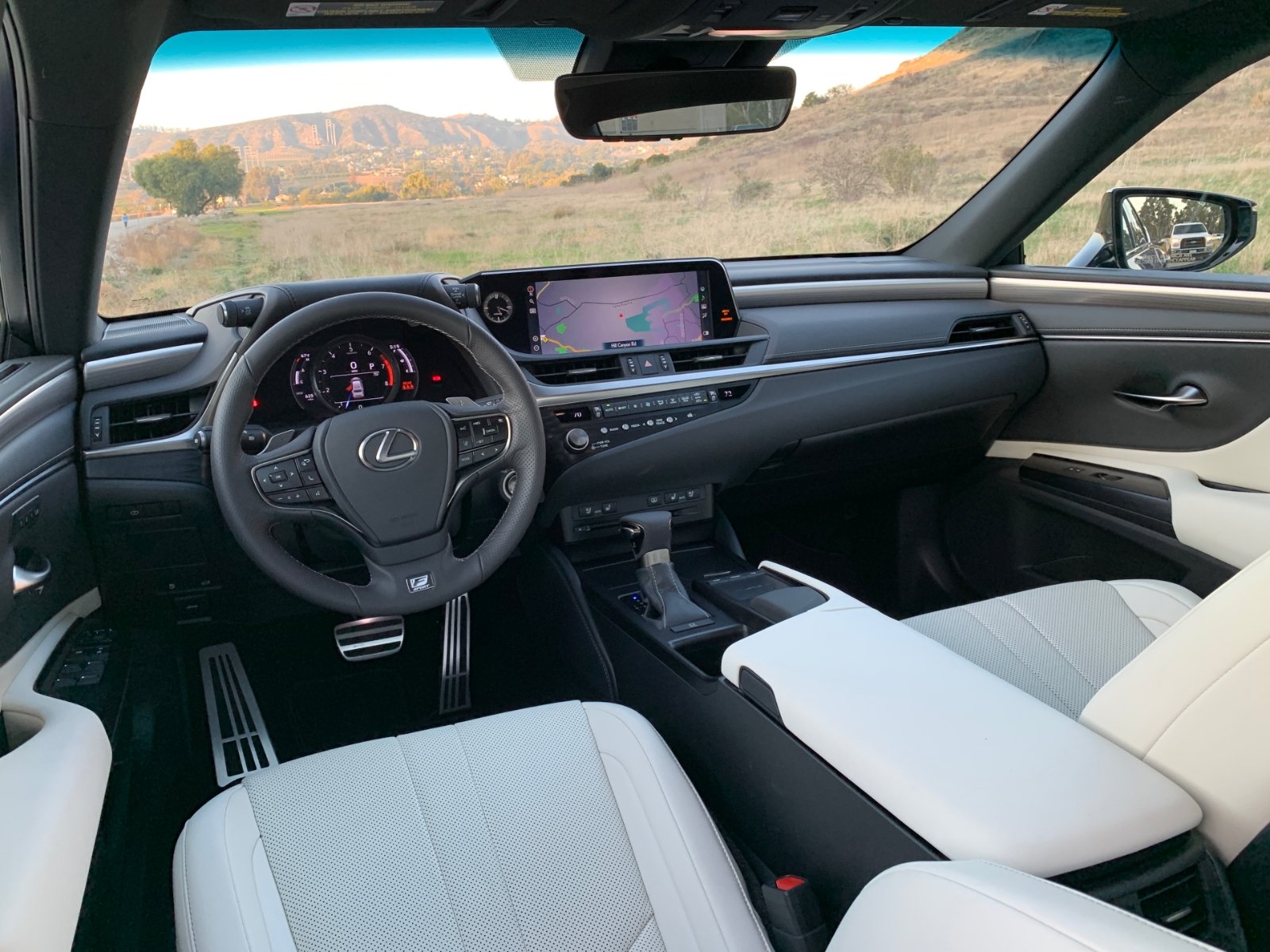 Here’s the problem. When you touch the pad, you must look at the screen, identify where the cursor is on the screen, figure out the path you need to take to get to the function you want to use, and then, as you track your fingertip in that direction, you need to watch the screen until you find the item you wish to select. And it is easy to overshoot your intended target. Especially if you look back at the road ahead.

There is positive news to report.

First, the climate controls and primary stereo controls are separate, residing on the dashboard. Lexus places a brilliant combination volume and tuning knob in close reach of the driver.

Second, the ES’s dynamic voice command technology is excellent. Once you start using it, you can bypass the touchpad the majority of the time.

Third, the optional 12.3-inch widescreen display looks terrific. But it needs to be a touchscreen, please.

With the 12.3-inch display, the ES also adds a dynamic navigation system and Destination Assist connected services, each with a free three-year subscription. The dynamic voice command technology is free for 10 years.

A 10-speaker premium sound system is standard in the ES, and it sounds pretty good. A 17-speaker, 1,800-watt Mark Levinson high-end sound system is available, and it probably sounds much better. 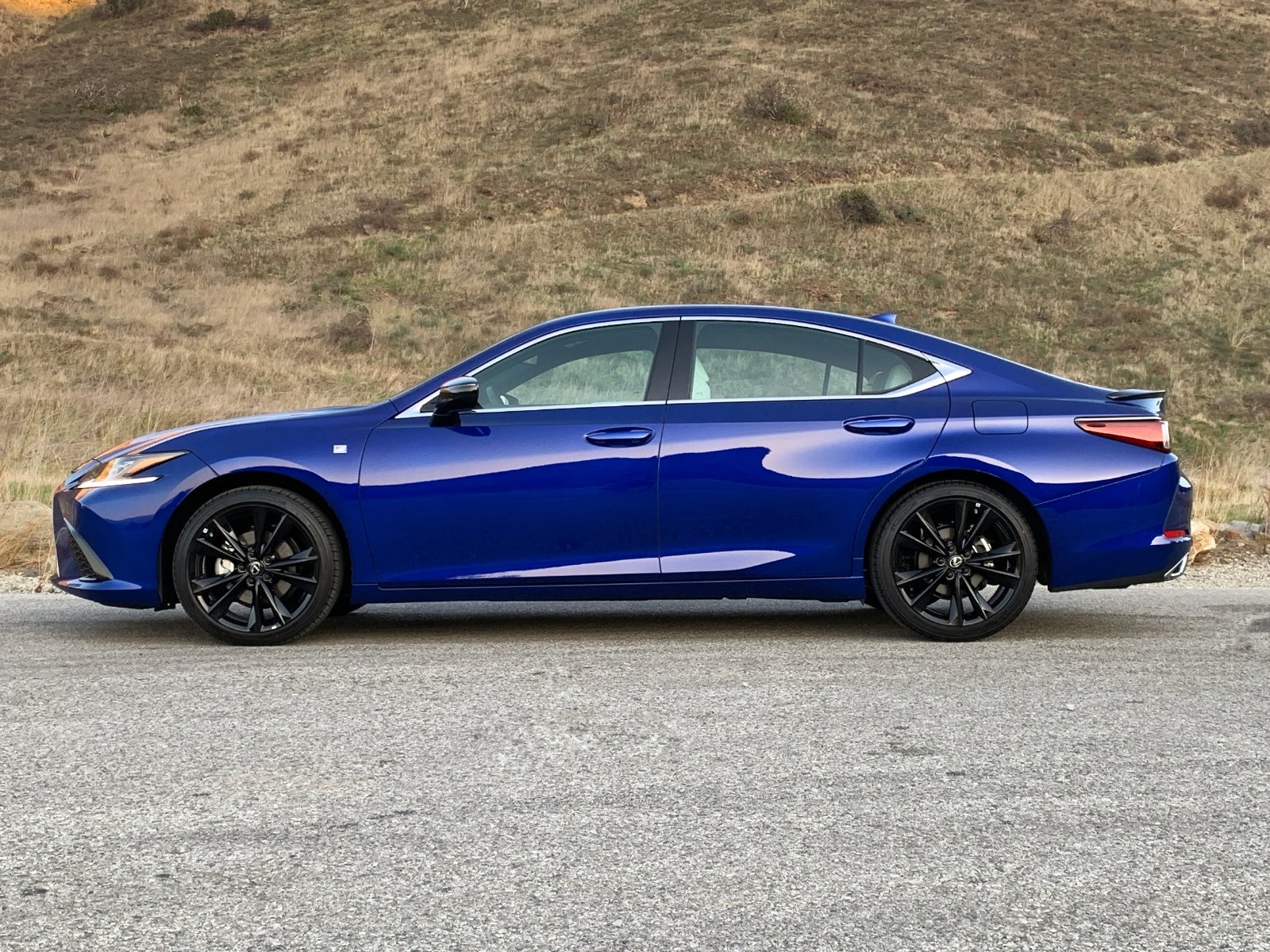 For 2021, Lexus adds blind-spot monitoring and rear cross-traffic alert as standard equipment for all versions of the car except for the base trim. Given how effective these technologies are, they should be standard.

Using the controls clustered on the left steering wheel spoke, you can adjust many ADAS settings. Others are separate controls on the steering wheel. We turned everything on and, when given a choice, chose the normal sensitivity setting. Then, we headed into Los Angeles on a Friday afternoon.

During this trip, the ADAS proved effective, though occasionally, the lane-centering technology wanted to put up a fight. As is true of most vehicles, LSS 2.0 had some trouble recognizing when other motorists cut into the gap ahead until they were directly in front of the car, which caused the ES to brake harder than a driver using human eyes to react to the situation would.

Ultimately, I shut the adaptive cruise, the lane-centering, and the lane-keeping systems off, instantly making Lexus more enjoyable to drive.

If you get into a collision while driving or riding in the Lexus ES, rest assured that this car is safe. The Insurance Institute for Highway Safety (IIHS) calls it a Top Safety Pick+ for 2021, while the National Highway Traffic Safety Administration (NHTSA) gives it a five-star overall rating. 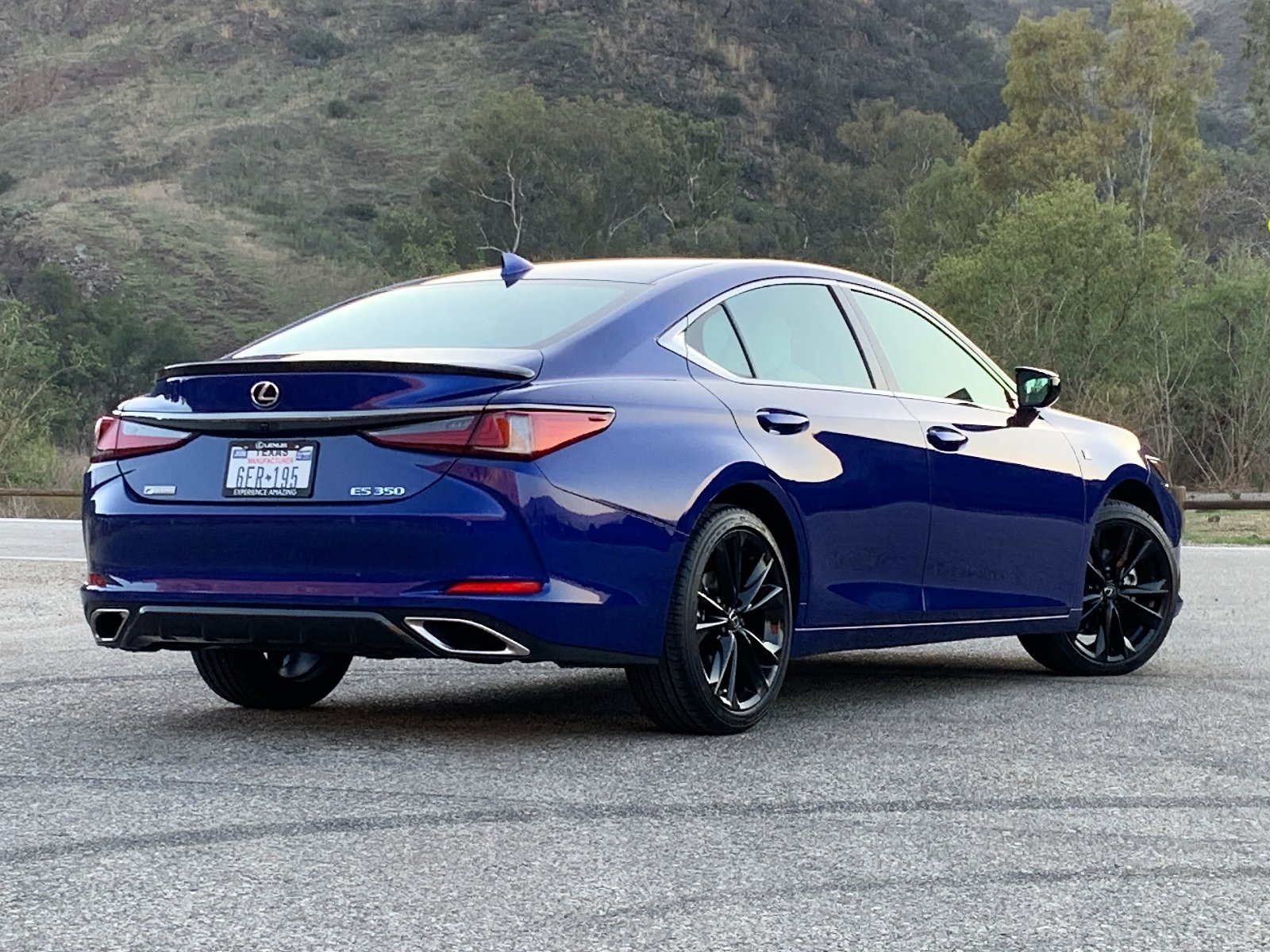 Nowadays, when you’re spending between $40,000 and $55,000 for a luxury car, you’re typically choosing a compact model with a turbocharged 4-cylinder engine. The Acura TLX, Audi A4, BMW 3 Series, Cadillac CT4, Genesis G70, Infiniti Q50, Mercedes-Benz C-Class, and Volvo S60 all fit that description (though the Q50 now has a standard V6). And Lexus sells the redesigned IS sport sedan to compete against them.

By comparison, the Lexus ES 350 is a larger car with a robust V6 engine. The list of competitors is not nearly as long. There is the Cadillac CT5, the Genesis G80, and the Jaguar XF. That’s it. And all of those come standard with a turbo-four and rear-wheel drive.

So, now that Lincoln has banished the MKZ to the dustbin of history, you could say the 2021 Lexus ES competes in a class of one. And there is no better way to dominate in terms of cost-effectiveness than to have no direct competition.

Shortly after test-driving the 2021 Lexus ES 350 F Sport with the new Black Line Special Edition option package, I was waiting in a coffee shop drive-thru line when a new Atomic Silver ES drove past. It had F Sport trim, it looked fantastic, and then, as I gazed appreciatively at it while it turned a corner, I remembered that driving enthusiasts like me are not supposed to like the Lexus ES.

But I do. And I think you will, too. Except for the infotainment system, of course.

Enter your zip to see incentives for a new ES in your area.