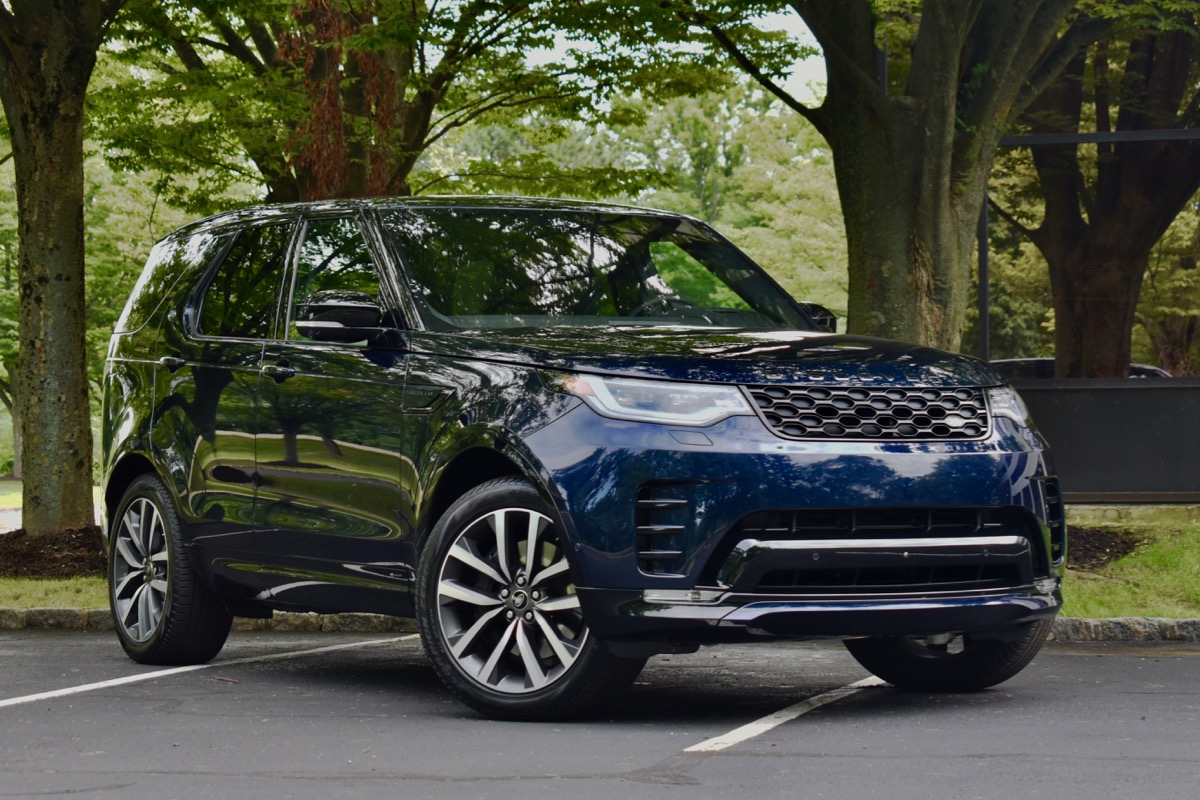 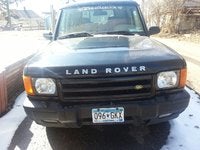 Looking for a New Land Rover Discovery in your area?

A luxury off-roader perfect for family trips to the wilderness. 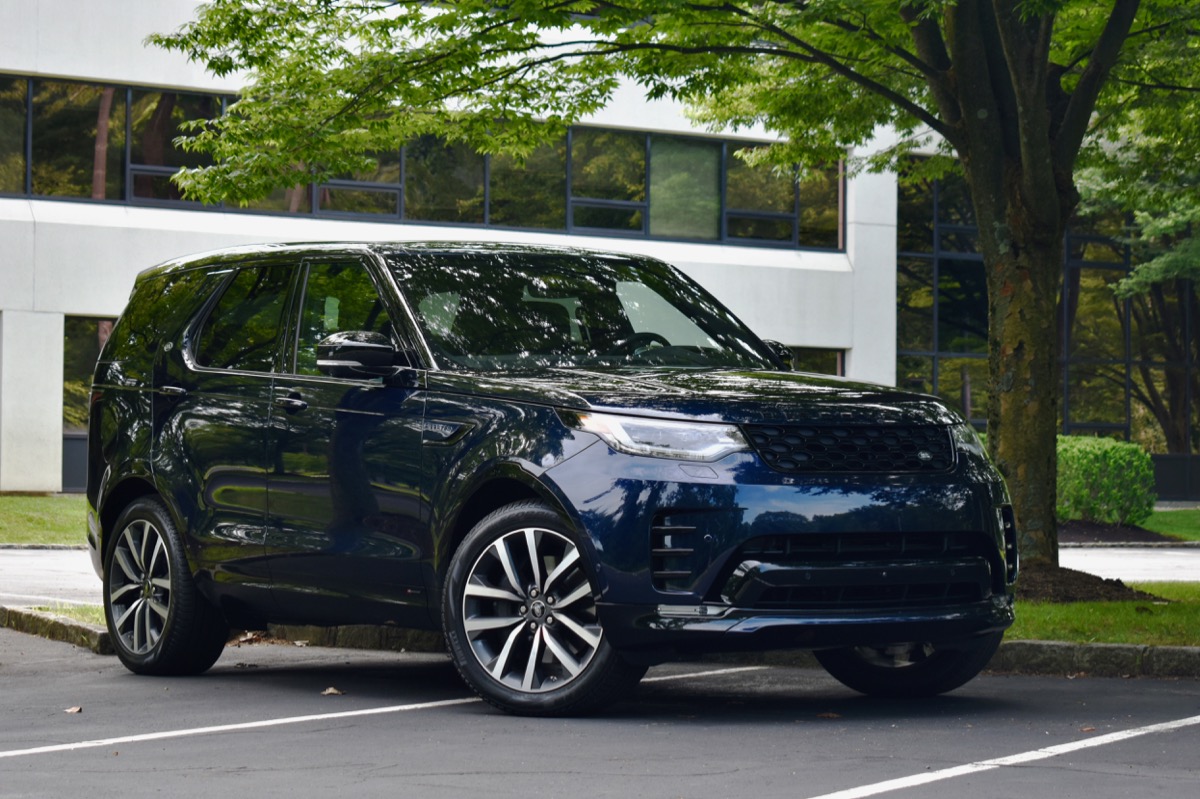 Representing the nameplate’s fifth generation, the 2021 Land Rover Discovery is the family SUV of the Land Rover lineup. Not to be confused with the smaller Land Rover Discovery Sport, the seven-seat Discovery competes against luxury family haulers like the Audi Q7, BMW X5, Mercedes-Benz GLE-Class, and Volvo XC90. Unlike its Continental European competition, though, the Discovery also boasts serious off-road capability.

The current-generation Discovery dates back to the 2017 model year, but it gets a few notable updates for the 2021, including new engines, refreshed exterior styling, redesigned second-row seats, and a new infotainment system. Land Rover offers the 2021 Discovery in base S, R-Dynamic S, and R-Dynamic HSE trim levels; we tested out a mid-level R-Dynamic S for this review. 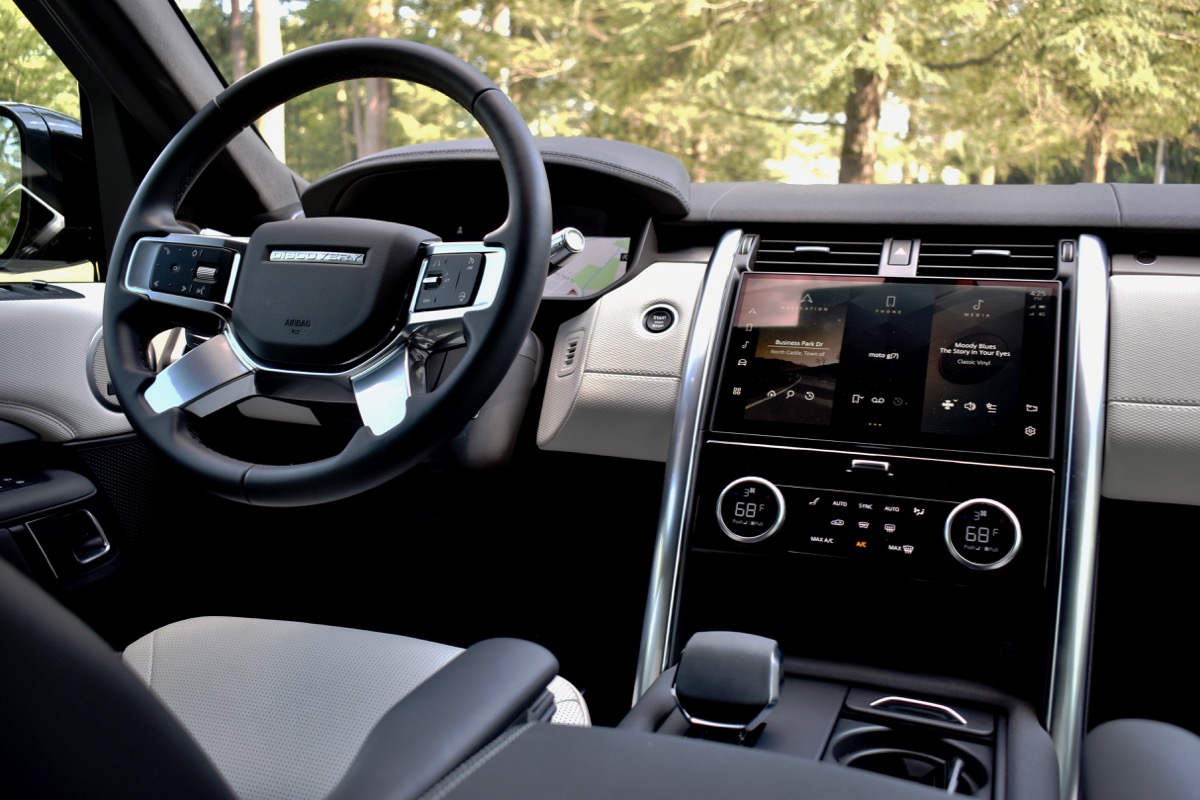 When shaping the current-generation Discovery, the team led by then Land Rover design boss (now chief creative officer) Gerry McGovern aimed to keep the classic high-roof, low-hood silhouette of past Discovery models, but with more modern details. So it still looks like a Discovery, but it also fits in with the rest of Land Rover’s lineup.

The styling doesn’t change much for the 2021 model year, but Land Rover did give it some subtle tweaks. The 2021 Discovery boasts new LED headlights and daytime running lights (set lower into their housings, according to Land Rover), a revised front bumper, body-color fender vents, and new LED taillights connected by a gloss black trim piece.

Also new for the 2021 is the R-Dynamic treatment for the Discovery S and Discovery HSE trim levels. Standard on the HSE and optional on the S, it adds a gloss black grille and other exterior trim, as well as two-tone leather upholstery with contrast stitching. That exterior trim didn’t really stand out against our test vehicle’s dark Portofino Blue paint, though.

The interior is typical Land Rover, meaning it has a clean design with overall good material quality. Some of the plastic trim in our test vehicle didn’t feel particularly luxurious, but it seemed like a reasonable concession to practicality. Similarly, the Discovery retains a more traditional, upright driving position, compared to the more cockpit-like feel of the Range Rover Sport and Range Rover Velar, both of which overlap with the Discovery in price. 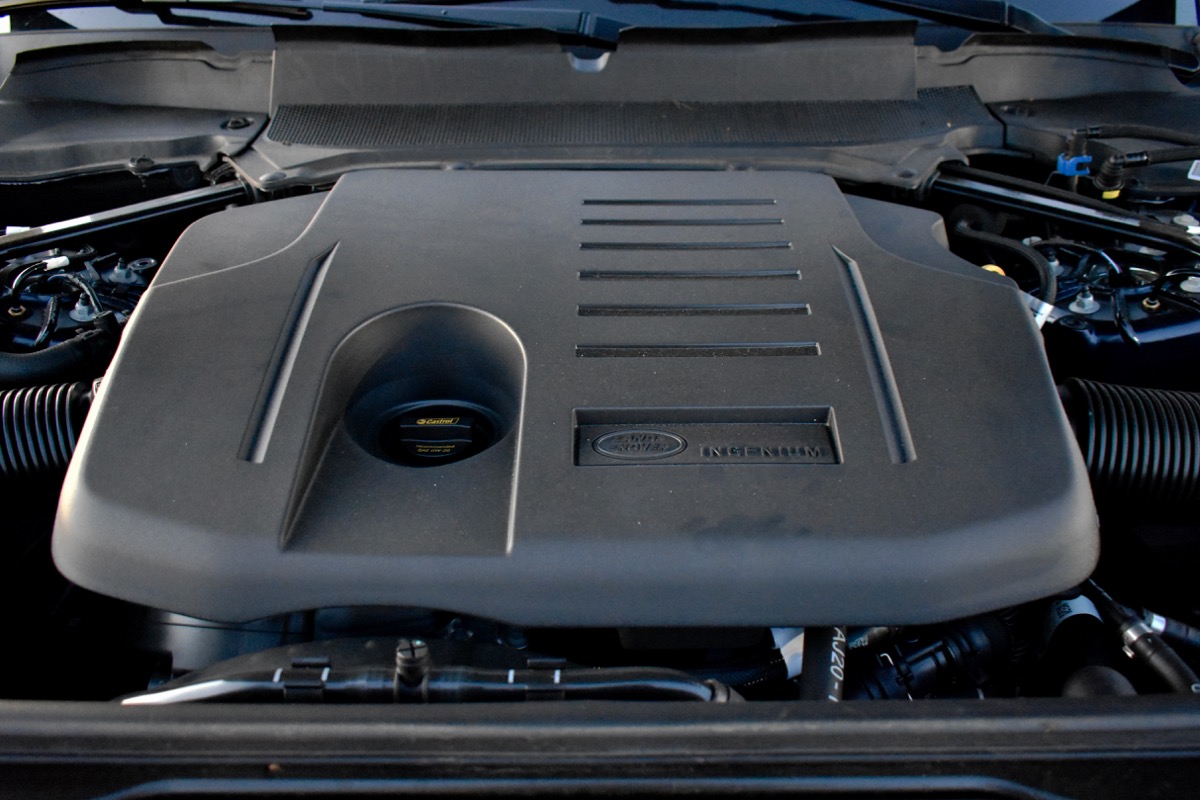 The Land Rover Discovery gets two powertrain options for the 2021 model year. The standard P300 version consists of a standalone 2.0-liter turbocharged four-cylinder engine, producing 296 horsepower and 296 pound-feet of torque. Upgrading to the P360 powertrain nets a 3.0-liter turbocharged inline-six with mild-hybrid assist, for a total of 355 hp and 369 lb-ft of torque. All Discovery models use an eight-speed automatic transmission, with standard four-wheel drive (4WD). The supercharged V6 and diesel engines are no longer available.

Land Rover quotes a zero-to-60 mph time of 6.9 seconds and a top speed of 125 mph for the P300, and claims the P360 mild hybrid will do zero to 60 mph in 6.2 seconds, with a 130-mph top speed. That makes the Discovery quicker than a base Volvo XC90, while the base Audi Q7 matches the acceleration time of the base Discovery P300. Both are available with more potent powertrains, however, while even a base BMW X5 sDrive35i will out-accelerate the Discovery P360 by 0.1 second, according to its maker.

The Disco wasn’t built for drag racing, however, and our P360-equipped S R-Dynamic test vehicle had more than enough power for everyday use. The Discovery had no problem getting up to speed for highway merges or exploiting gaps in traffic, something that couldn’t be said of its more agricultural ancestors. We also appreciated the smooth blend of gasoline and electric power in this lightly-electrified vehicle. The Discovery isn’t a full hybrid like the Toyota Prius, but we could feel the electric motor providing extra torque when needed.

The Discovery also has the road manners you should expect from a luxury vehicle. Even on our test vehicle’s large 21-inch wheels (which can ruin ride quality), The Discovery damped out road nearly all road imperfections. That’s partly down to our tester’s air suspension, which is also height-adjustable. With just a touchscreen tap, you can raise the ride height for off-roading, or lower it to make getting in and out easier. However, the Discovery lacked the agility of some other Land Rover models. Heavy, imprecise steering and copious body roll mean you’ll never forget that you are in a heavy SUV.

With the suspension raised to its off-road height, Land Rover quotes 11.1 inches of ground clearance, a 34-degree approach angle, 30-degree departure angle, and 27.5-degree breakover angle. Models with air suspension can also ford up to 35.4 inches of water, according to Land Rover. So while we didn’t get to take our test vehicle off road, those figures, along with the inclusion of low range and Land Rover’s excellent Terrain Response 2 system, speak well of the Discovery’s abilities. 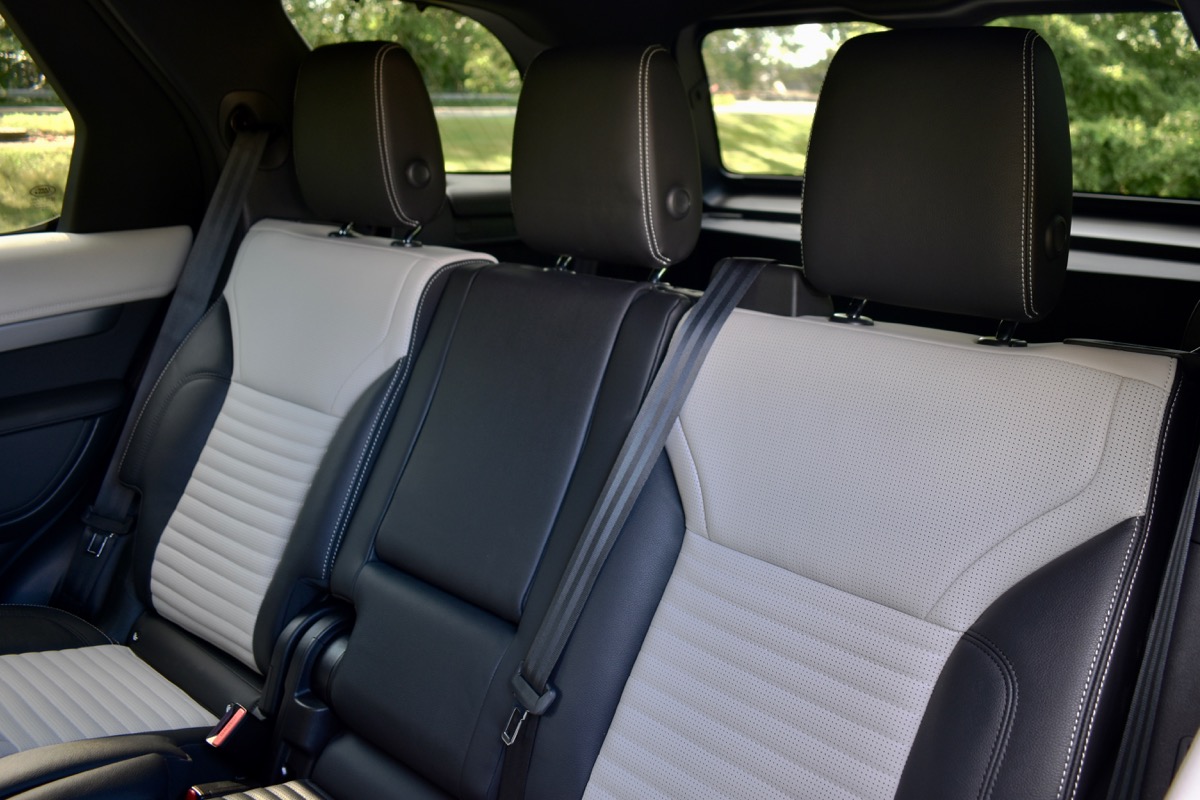 Front-seat headroom and legroom are about average for this segment. From the driver’s seat, we appreciated the Discovery’s low window sills, which made maneuvering in and out of parking spaces easier. The Discovery also offers more second-row headroom than most other similarly-sized luxury SUVs, but second-row legroom is below average. Land Rover said the second-row seats were redesigned for 2021, with more lateral support and longer, thicker cushions, and they did feel fairly comfortable. Note that Land Rover only offers a second-row bench seat; captain’s chairs aren’t available.

At 74.3 cubic feet with the second-row and third-row seats folded, the Discovery offers above-average cargo space, and our test vehicle easily swallowed a flat-packed Ikea bookcase. A power-folding 60/40 split third row (which can be controlled from the central touchscreen), available gesture-activated tailgate, and powered inner tailgate help make carrying cargo easier, but the cargo area’s lip was fairly high, which can make loading items more difficult. Raise the second row, cargo space drops to 45 cubic feet, then diminishes to 9.1 cubic feet with the third row in place.

One clever piece of interior design is a storage cubby located behind the fascia that houses the climate-control knobs. It proved to be a great place to store small items that would normally get thrown in the cupholders. A deep center console storage bin is included as well.

Land Rover quotes a 6,613-pound maximum towing capacity for the base four-cylinder P300 powertrain, and 8,200 pounds for the P360 six-cylinder mild hybrid. Those are impressive numbers for this segment. 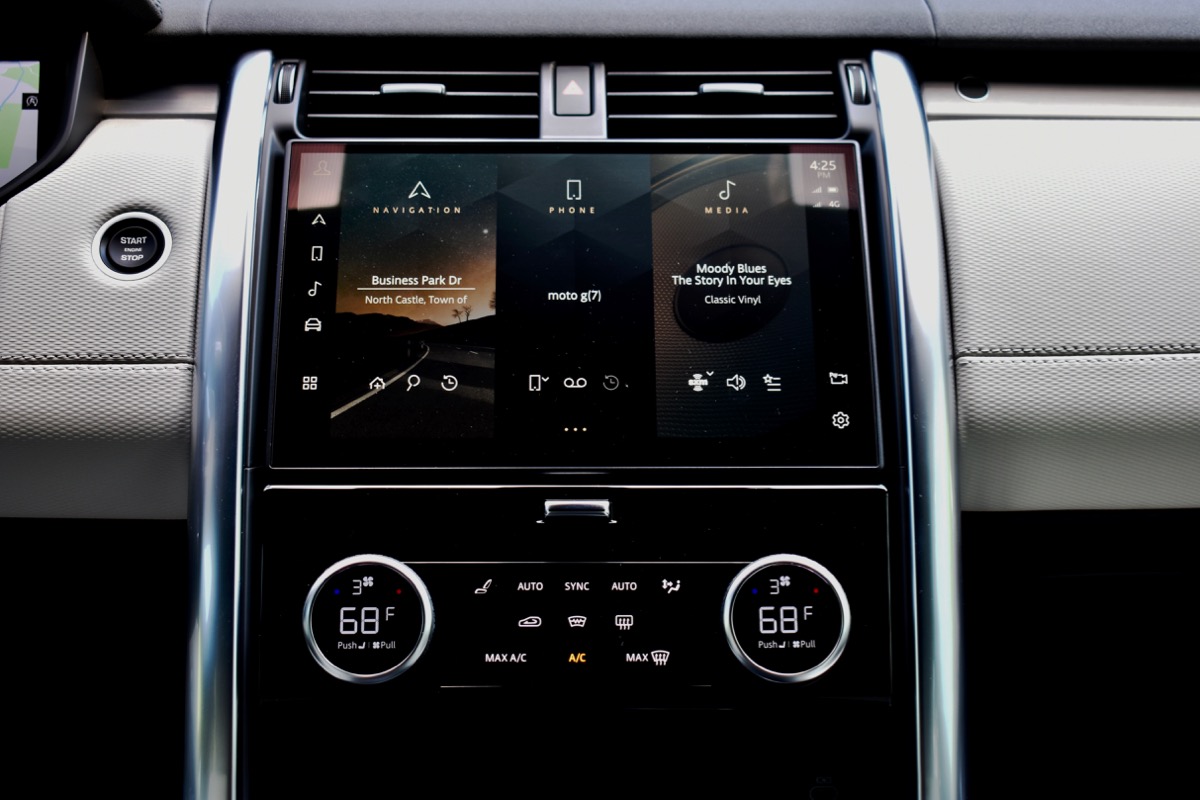 Infotainment systems have been a weak point for Land Rover in the past, but Pivi Pro cures most previous ills. We liked the graphic design, and found the touchscreen to be very responsive. However, finding some functions, such as the camera view, required going through multiple menus. The default layout of the digital instrument cluster also didn’t leave enough room for the fuel gauge, which was relegated to a tiny space at the bottom of the display.

Land Rover doesn’t offer a rear-seat entertainment system, but the Discovery can be equipped with Click and Go tablet holders for the front seatbacks, with integrated USB-A charge ports. A built-in 4G LTE WiFi hotspot capable of supporting up to eight devices is also available at extra cost. 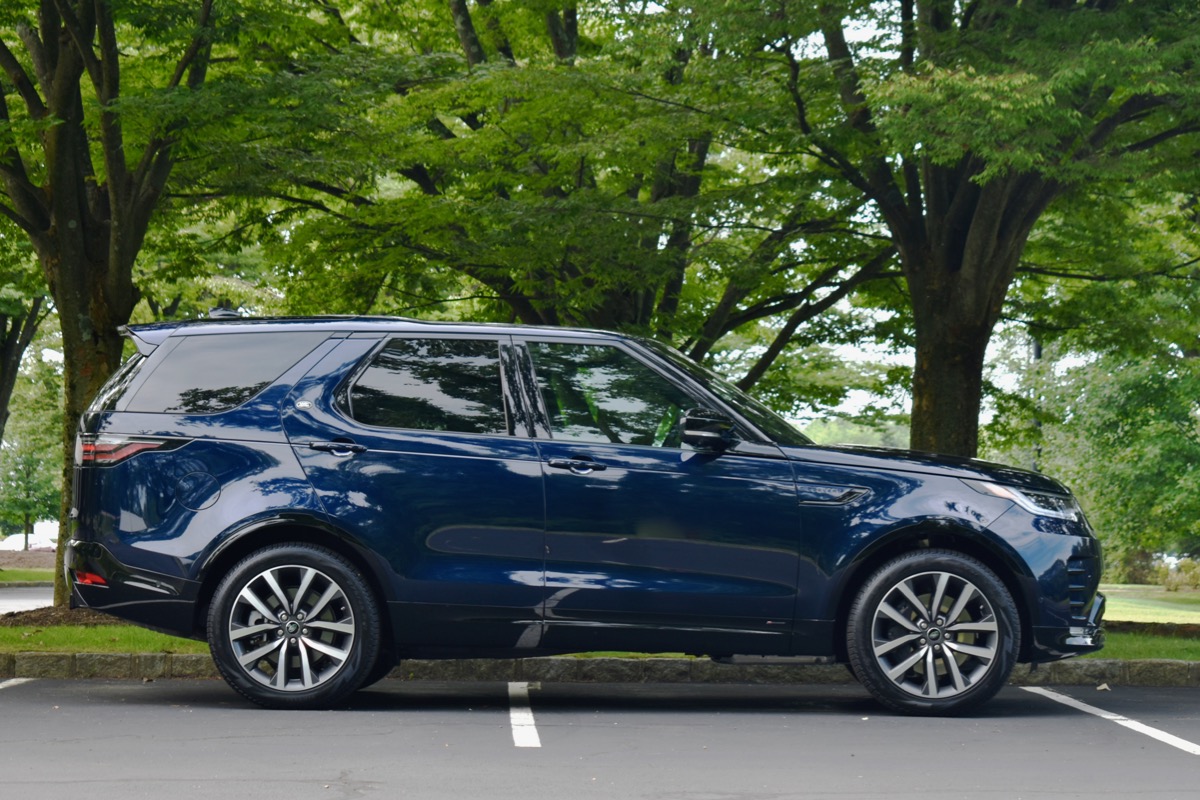 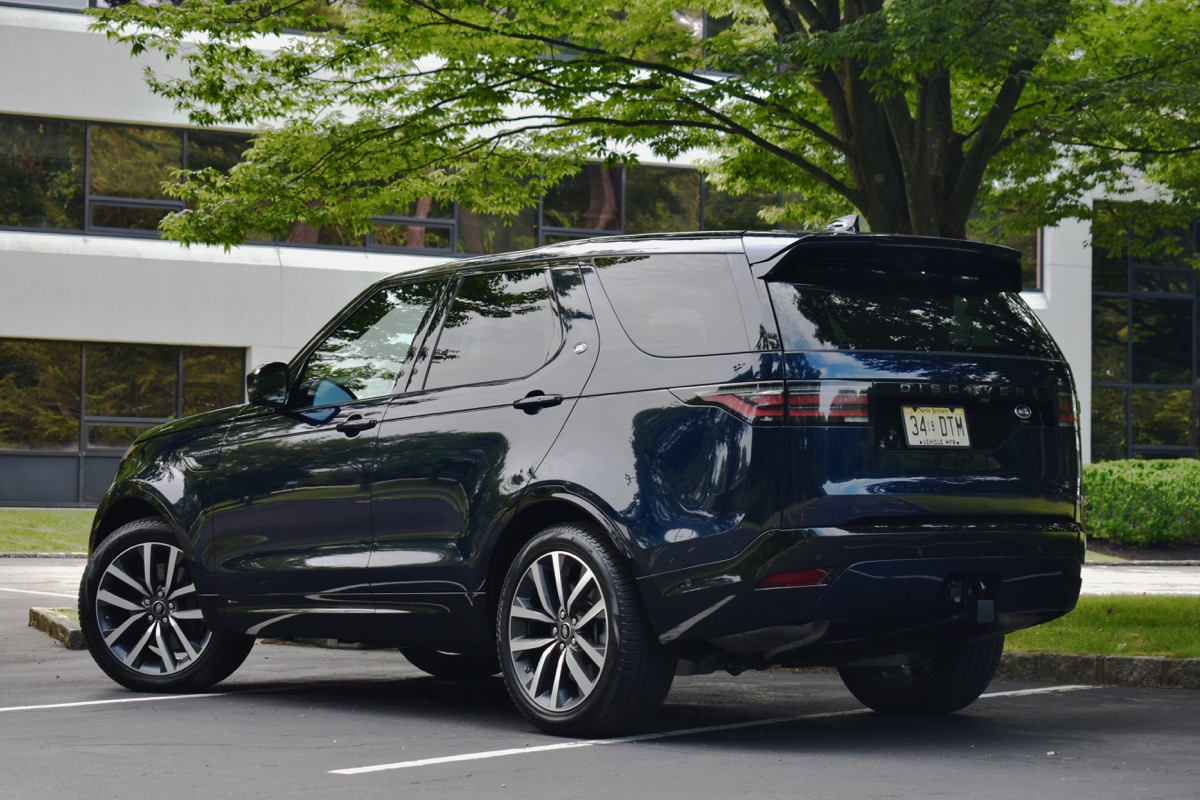 Pricing starts at $55,250 for the base four-cylinder Discovery S model, while the range-topping six-cylinder R-Dynamic HSE starts at $70,250 (all prices include a mandatory $1,350 destination charge). Our test vehicle was a mid-level six-cylinder R-Dynamic S with a $63,250 base price, but options like the Cold Climate Pack (heated steering wheel, windshield, and washer jets), 21-inch wheels, Meridian audio system, head-up display, power third-row seats, and four-zone climate control raised the as-tested MSRP to $73,055.

Luxury automakers often nickel and dime their customers, but the Discovery does include several key features, such as 4WD, leather seats, and the full 12.3-inch instrument cluster/11.4-inch touchscreen setup, as standard equipment. You’ll have to pay extra for features like four-zone climate control and adaptive cruise control, though.

The Discovery excels in traditional SUV metrics like towing and off-road capability, while still offering a refined driving experience. Competitors like the Audi Q7, BMW X5, Mercedes-Benz GLE, and Volvo XC90 will be a bit less unwieldy on twisty roads, while the Lincoln Aviator dials the luxury experience up a notch. Overall, though, the Discovery is a solid midsize luxury SUV.

What's your take on the 2021 Land Rover Discovery?

Have you driven a 2021 Land Rover Discovery?
Rank This Car

Enter your zip to see incentives for a new Discovery in your area.