Looking for a New Kia Sorento Hybrid in your area? 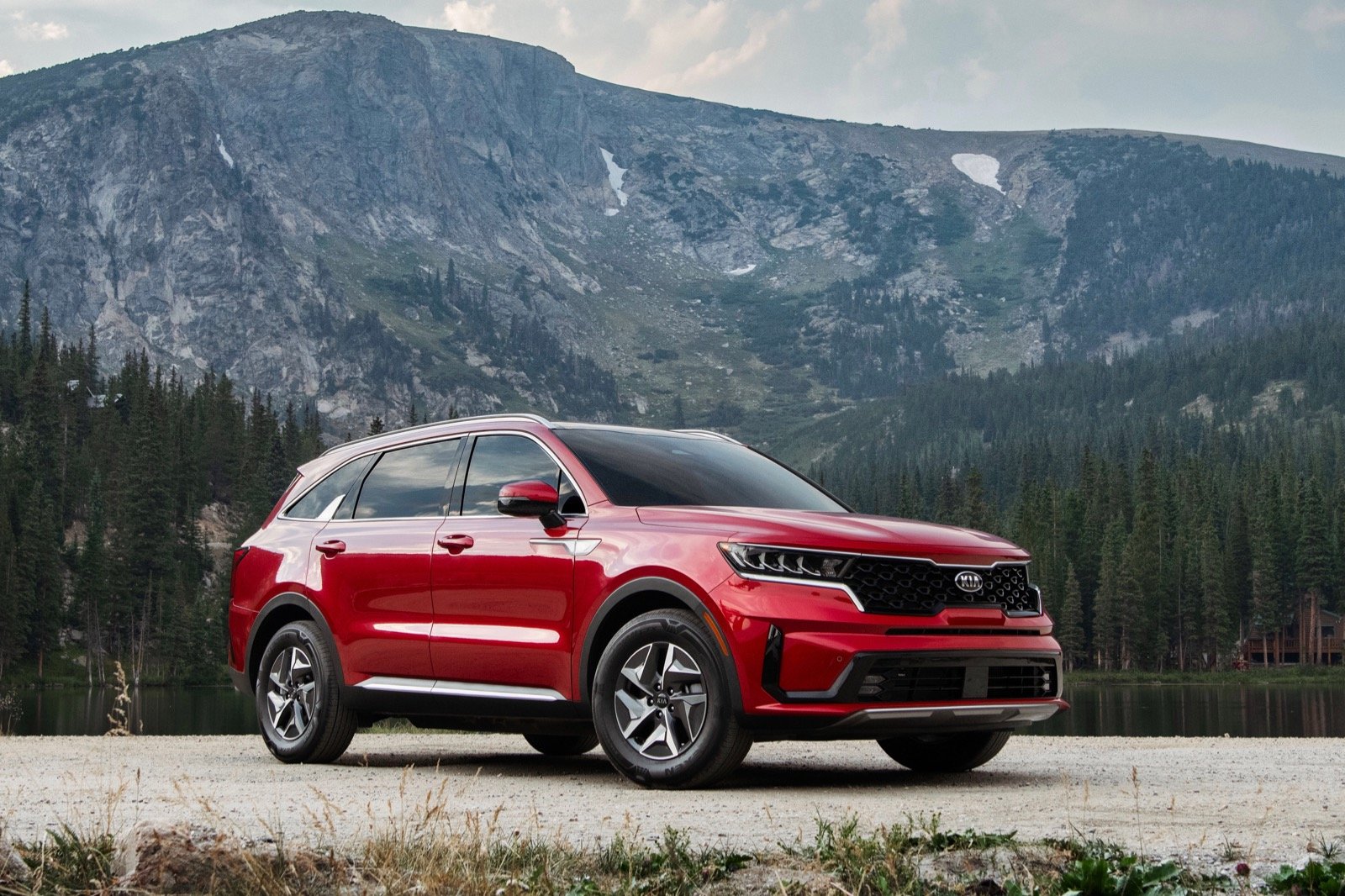 Being fuel-efficient and stylish are just two of the 2021 Kia Sorento Hybrid’s positive attributes. The fresh three-row offering from Kia has something its three-row Telluride doesn’t: a hybrid option. The Sorento Hybrid is more capable than before, but some design decisions have left us questioning if it’s better to just go with the tried and true Toyota Highlander Hybrid instead. 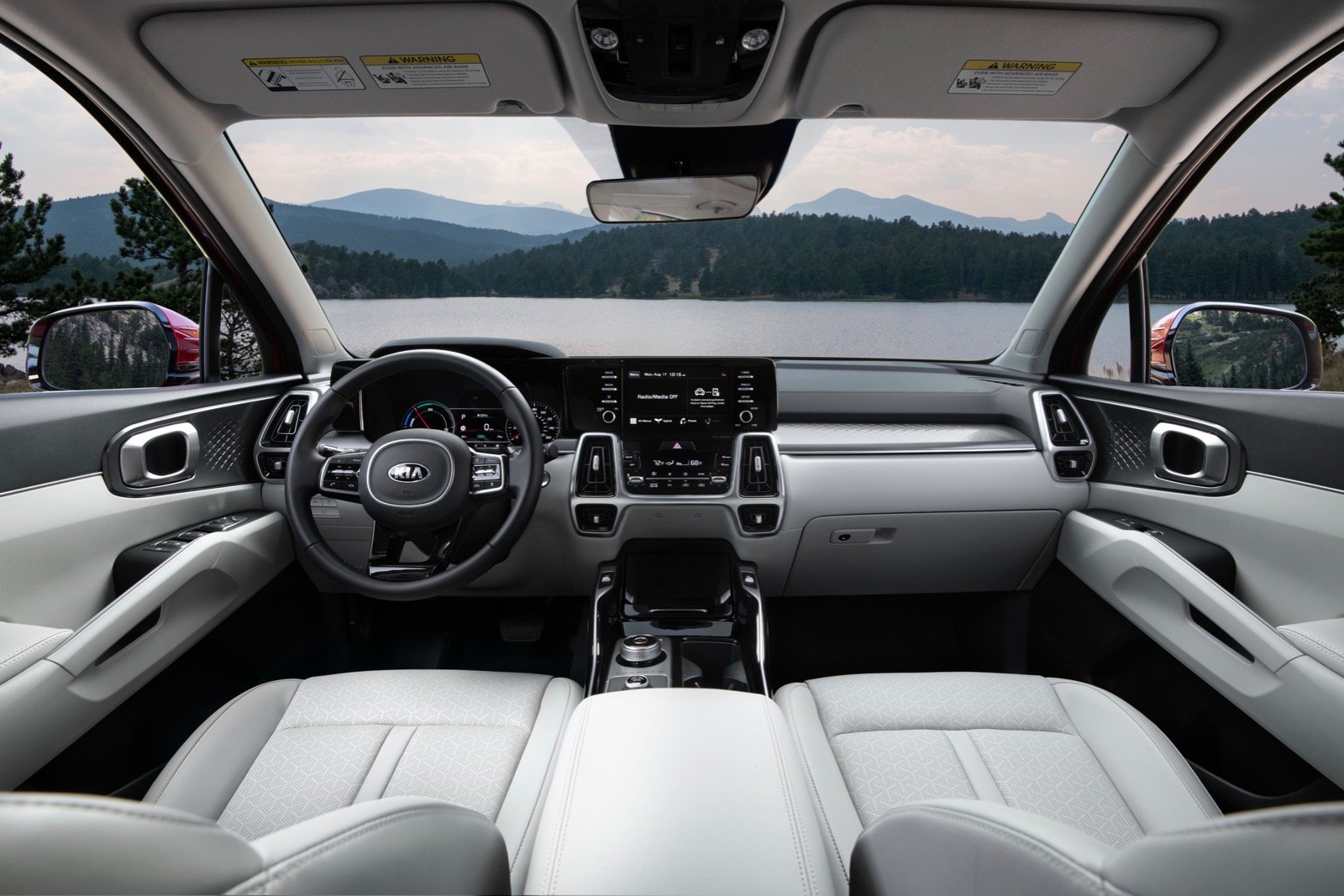 The 2021 Kia Sorento Hybrid takes bits and bobs of design from other Kias and manages to combine them together in a package that looks unlike anything else in the lineup while leaving no question that it belongs solidly in Kia’s stable. The model is decidedly a crossover, especially when compared to Kia's Telluride SUV.

Kia sells the traditional Sorento in five trim levels. The Sorento Hybrid is sold in just two: S and EX. There aren’t any major differences between the two, rather just a few unchecked boxes in the S.

The Sorento Hybrid EX adds fog lamps, has a gloss black grille and rear spoiler rather than the traditional black; and gets a panoramic sunroof with a power shade.

Both ride on 17-inch alloy wheels. It comes standard with a temporary spare tire.

With the Sorento Hybrid, Kia has made an attractive vehicle that stands out in a crowd for all the right reasons. It doesn’t look like everything else on the road and that’s part of the appeal.

The inside of the SUV is a little more status quo from the company but don’t let that scare you off. Status quo from Kia, or its sister company Hyundai, is better executed than a lot of what you’ll find on the market today.

Here, again, the new Sorento Hybrid excels at offering an aesthetic that is unique but not unattractive. There is an appropriate amount of hard- and soft-touch surfaces for the SUV’s price point and not so much piano black throughout the cabin that you’ll feel like you’re always cleaning it.

There’s dark silver plastic trim that breaks up the upper dashboard from the lower in both the black and gray interior options. It’s not unattractive, but when sunlight reflects off it via the sunroof or just midday rays through the windows, it is distracting. 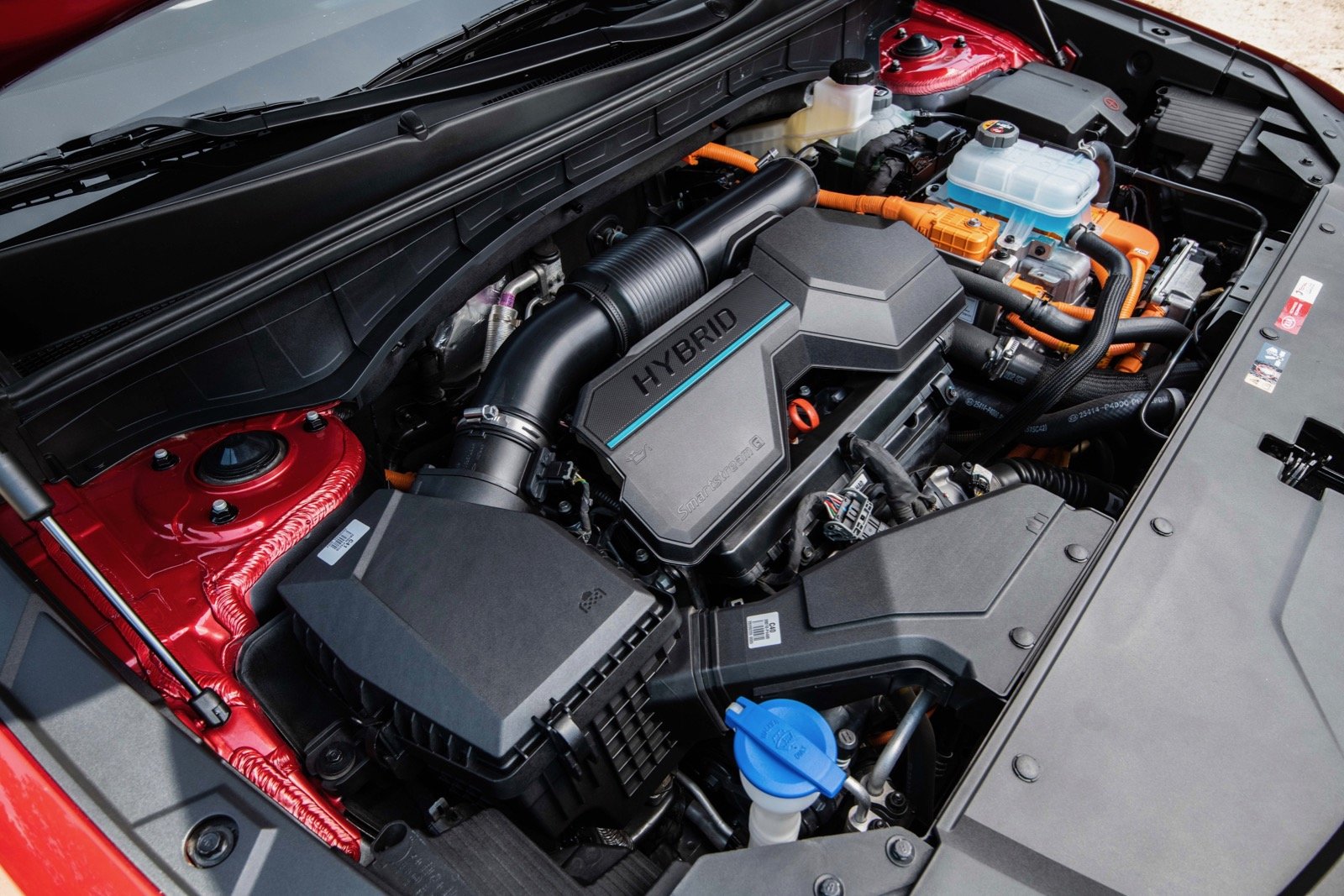 Kia’s hybrid powertrain in the Sorento Hybrid prioritizes fuel efficiency over performance. That’s an important distinction that sets it apart from other hybrid SUVs that use their electric power to give the car a throttle boost.

The Sorento Hybrid has a turbocharged 1.6-liter four-cylinder engine that is paired with a six-speed automatic transmission and electric motor. The turbo-four makes 177 horsepower and 195 pound-feet of torque, which is plenty of you’re planning to drive the Sorento with just a few family members and no luggage inside most of the time. The Sorento Hybrid is only available with front-wheel drive (FWD); all-wheel drive (AWD) is not available.

Drivers have the option of putting the car in their choice of Comfort, Eco, Sport, or Smart drive modes. The Kia is most comfortable with itself driving in Eco mode—that’s the default when you switch the car on. In Eco mode, the engine and transmission work together relatively seamlessly at lower speeds or under gradual acceleration.

Under harder acceleration, and in Sport and Smart modes, the Sorento Hyrbid’s powertrain is noisy and ill-mannered. It’s almost like the SUV is telling you, “I’m built for efficiency, not speed”. Message received.

In all the drive modes, steering is well-calibrated. The Sorento Hybrid easily maneuvers where you want it when you want it. It’s easy to park with plenty of forward visibility and getting around corners in a neighborhood doesn’t reveal too many A-pillar-related blind spots.

The EPA rates the Sorento Hybrid as achieving 39 mpg in the city, 35 mpg on the highway, and 37 mpg combined. Those fuel economy numbers are very good for a three-row SUV. The 2021 Sorento Hybrid scores one mpg combined better than the 2021 Toyota Highlander Hybrid despite the Toyota having a larger engine.

Unlike the Sorento Hybrid, the Highlander Hybrid is offered with available AWD, which, when equipped, knocks its efficiency down to 35 mpg combined. 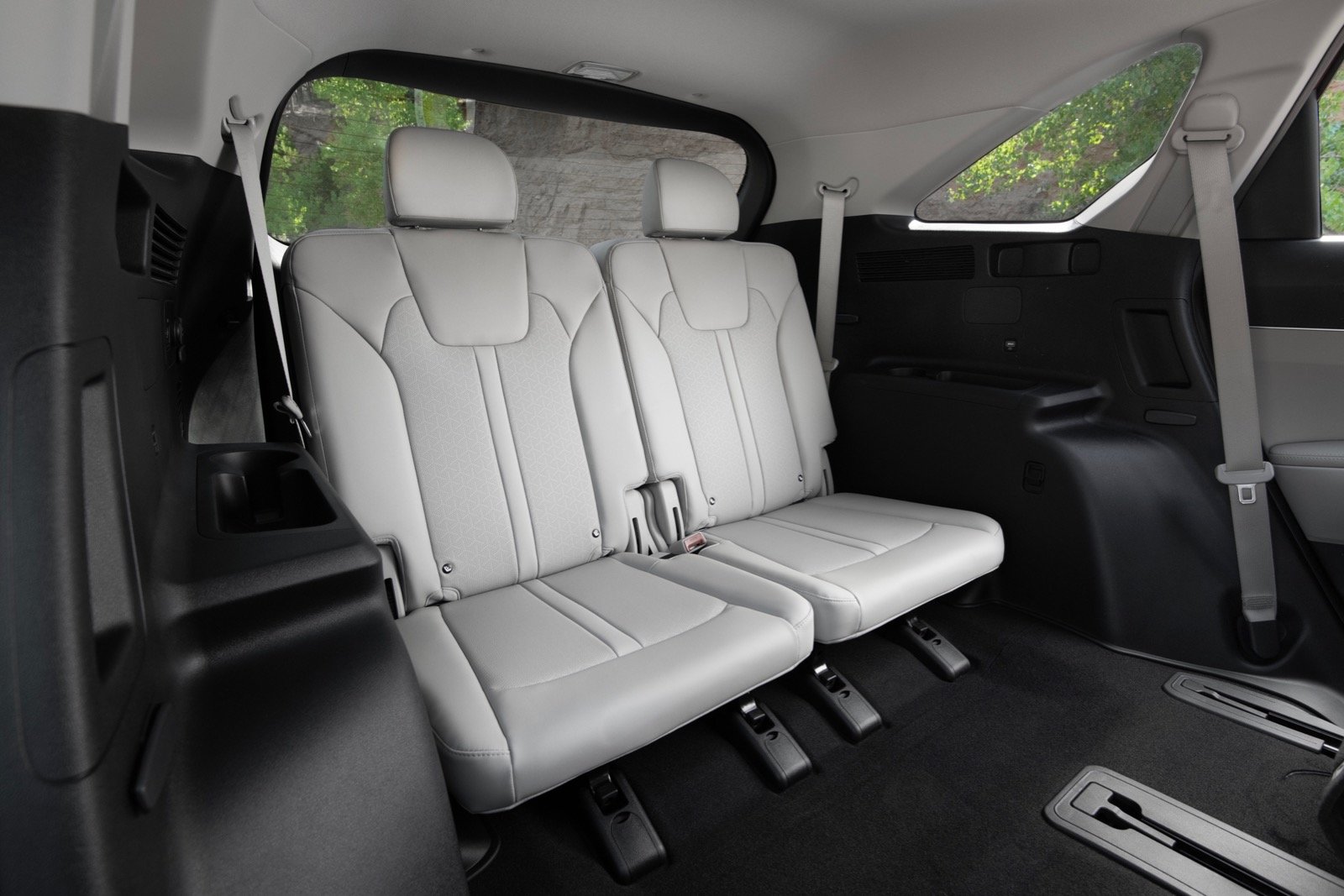 Kia is traditionally known for having well-thought-out interiors that deliver exactly what customers need with premium-level appointments in the highest trim levels. The Sorento is no exception.

A key styling feature that exemplifies this characteristic is the split-level dashboard vents at the center of the car. They allow cool or hot air to be directed with precision where front seat riders want it without having to fuss with other climate controls or having to propel the air at such a fan speed as it makes shouting to be heard while in conversation necessary.

There’s also a good amount of buttons and levers in the Kia for controlling everything from the infotainment touchscreen to the climate controls. It’s all perfectly functional and it’s easy to find the right switch while driving or at night.

Moving the dial that is for drive modes is an easy affair. It goes into position easily. The same cannot be said for the rotary shifter on the center console. The car doesn’t always shift into reverse or drive when commanded to. It takes deliberate effort (and a bit of finger-crossing) to get it to go into gear correctly the first time. Having park as a button on the dial makes it easy to not have to question whether the car is in park, as you sometimes need to do with similarly-equipped Dodge or Jeep models.

What the Kia does get right are the Sorento’s seats. The driver can easily find the right settings while the passenger is disappointedly left with just manual controls, even in the Sorento Hybrid EX.

Third-row seating isn’t as comfortable as the second-row. The seats are set low but don’t offer as much legroom as most adults will need to be able to sit back there with ease. There is nearly six inches less legroom in the Sorento than the Telluride, and two inches less shoulder- and headroom. The Highlander Hybrid offers less legroom than the Sorento for third-row passengers but the Subaru Ascent offers more space.

When it comes to cargo space, the Sorento Hybrid has plenty for a trip to the grocery store. Any more than that and you’ll want to put the rear seats down. This is pretty status quo for the midsize SUV segment. The Highlander Hybrid and Telluride have more cargo space but not nearly as much as what you’ll find in a full-size SUV or some two-row compact SUVs. A power liftgate is available on the Sorento Hybrid EX but not the Sorento Hybrid S. 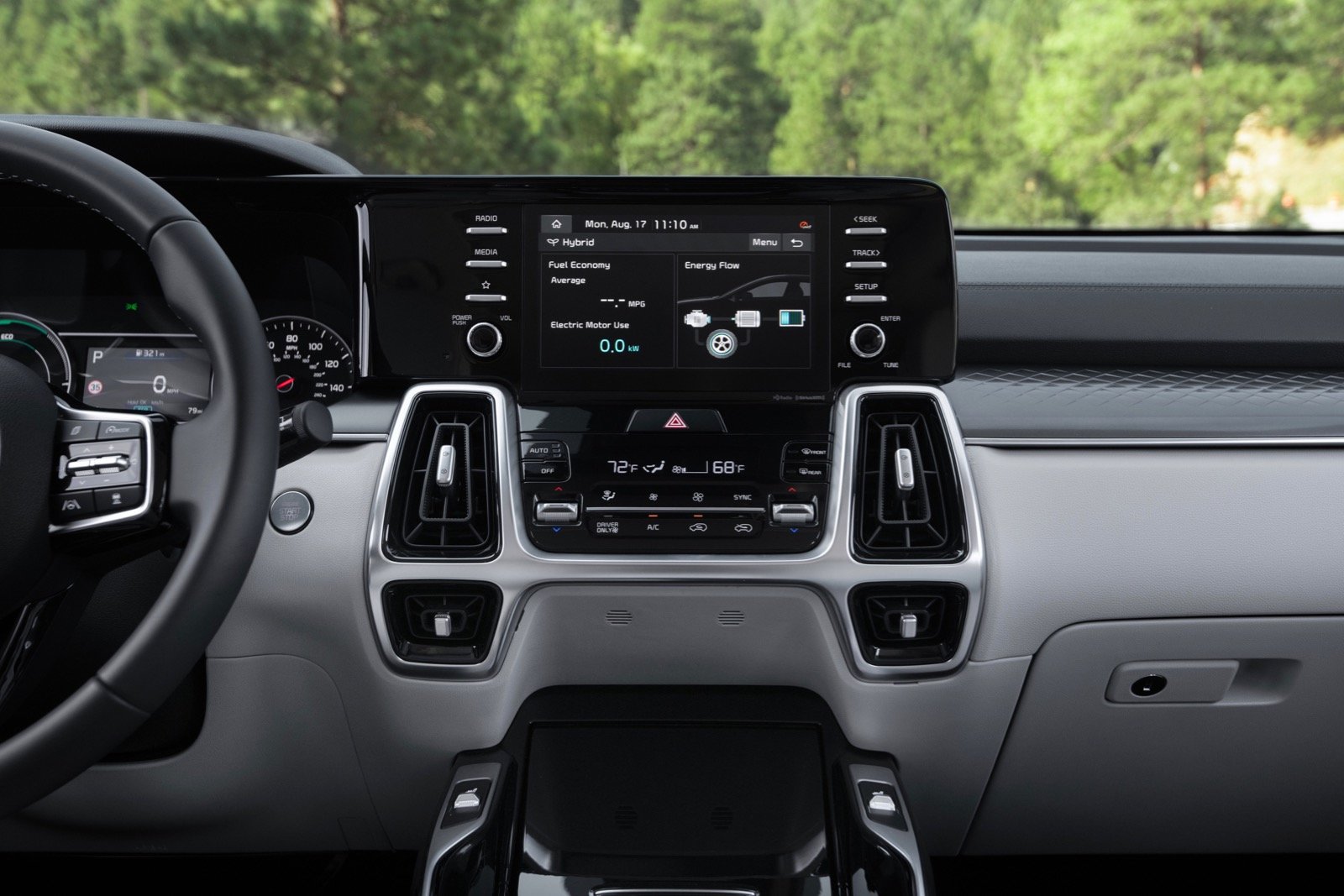 Every 2021 Kia Sorento Hybrid gets an 8-inch infotainment touchscreen at the center of the dashboard. The operating system is easy to use and the screen is responsive. There are buttons on the sides of the screen that enable the user to quickly choose from the basic function channels (radio, media, etc.) as well as radio tuning and volume knobs.

Bluetooth, a modem, wireless Apple CarPlay and Android Auto, voice recognition, and satellite radio are standard. There are power outlets, including USB ports, in the center stack, rear floor console, and luggage area. Push-button start, keyless entry, and a rearview camera are also standard. Buyers can upgrade their Sorento to include a wireless phone charger.

The lineup of infotainment system technology and the way it operates is completely expected. That’s another part of what Kia seems to do right over and over again. Nothing looks, feels, or operates like it’s cutting edge, but it doesn’t have to—this isn’t a luxury vehicle. 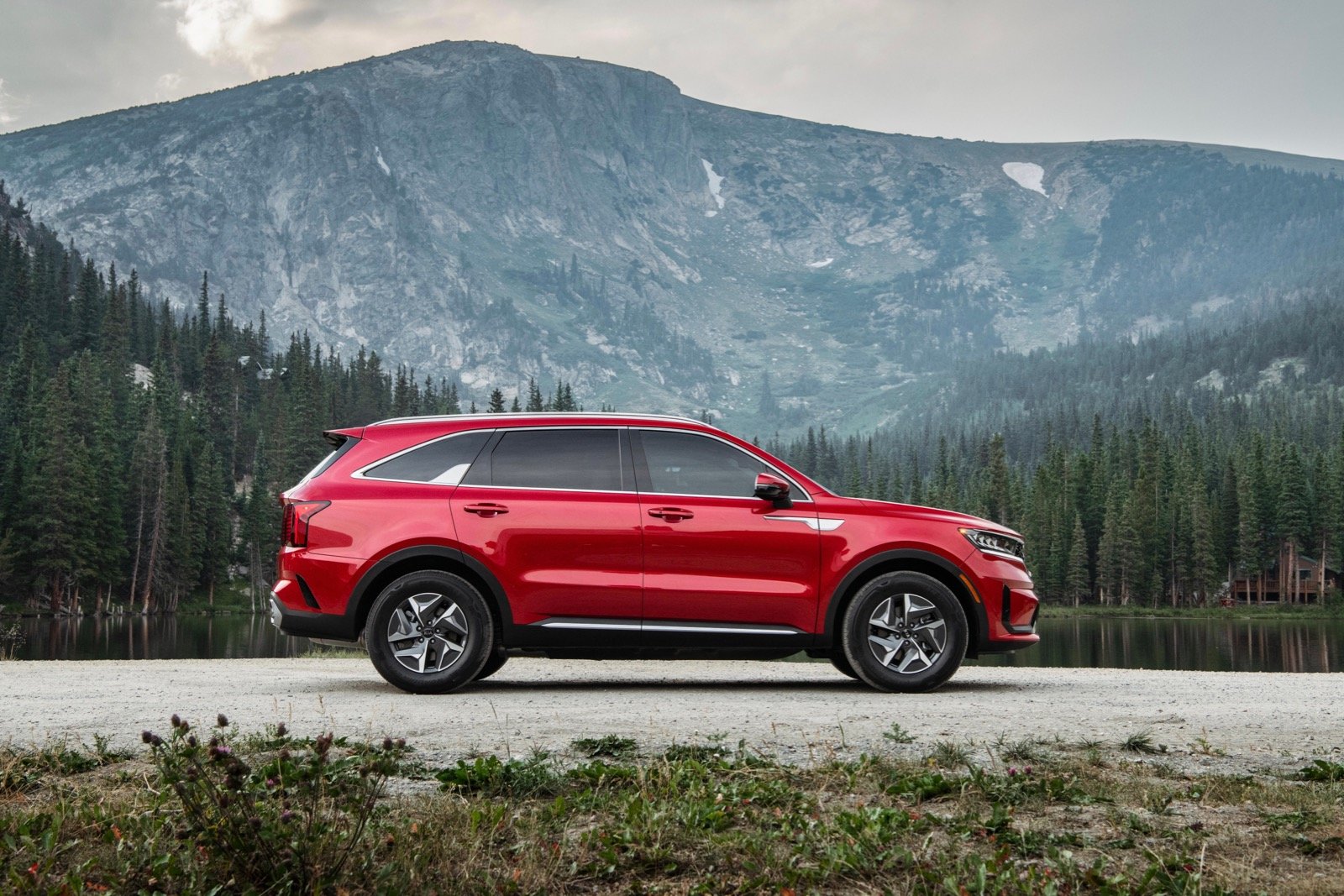 Most of the tech works as advertised, however, the lane-keeping and centering system wasn't as honed in on the lines as is optimal, which resulted in crossing over the lines without any alert going off or corrective action being taken.

The Kia Sorento Hybrid has not been crash-tested by the Insurance Institute for Highway Safety (IIHS). However, IIHS has tested the 2021 Kia Sorento, which has a similar body structure, and named it a 2021 Top Safety Pick, recognizing it as having all "Good" crashworthiness scores and mostly "Superior" crash-avoidance and mitigation technology offerings.

The National Highway Transportation Safety Administration has not rated any 2021 Sorento models. 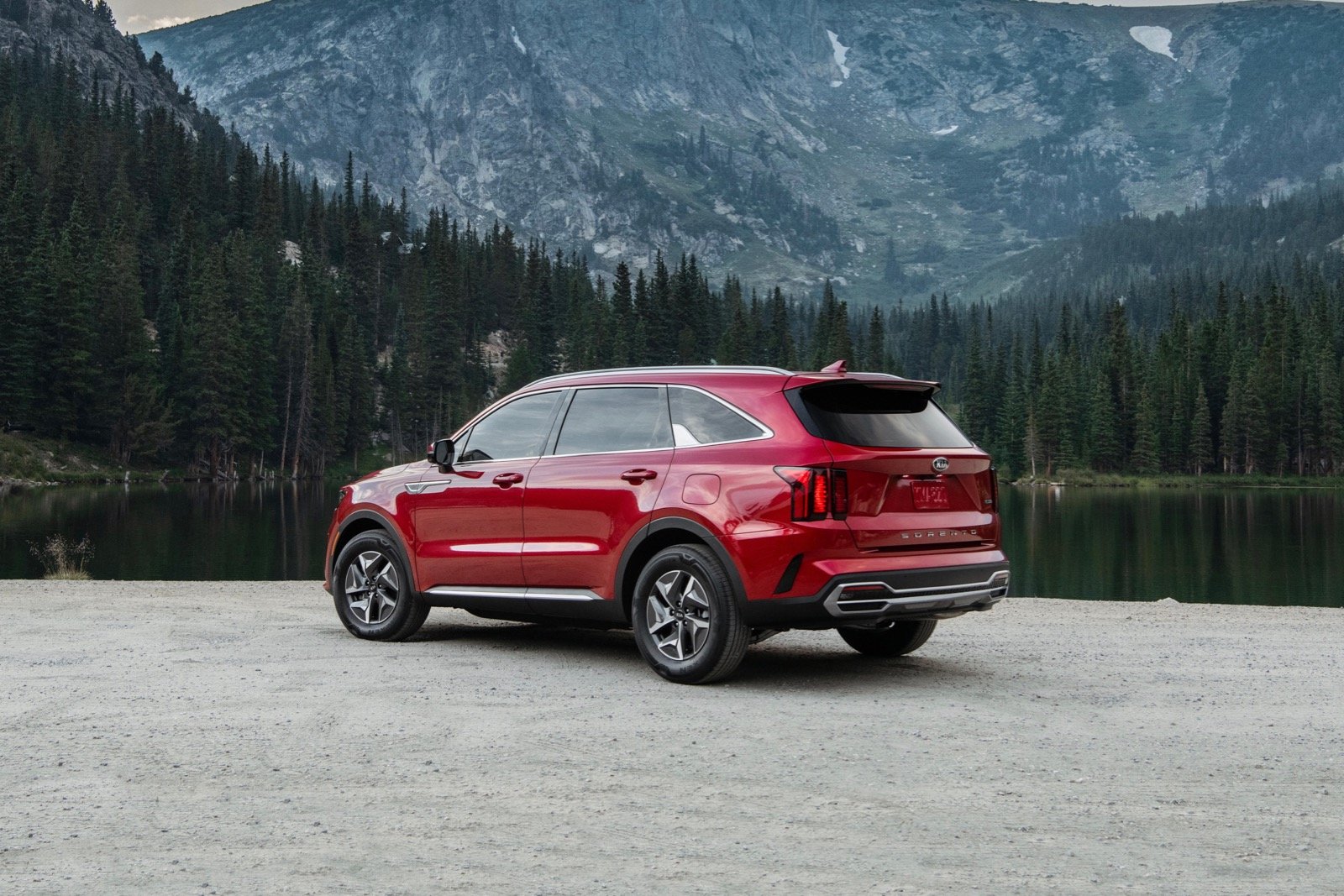 Kia generally excels at offering a lot of bang for your buck and the Sorento Hybrid is no exception. The Sorento Hybrid S starts at $33,590 and the top-tier Sorento Hybrid EX has a starting MSRP of $36,590. Pricing for specialty paint colors and options like crossbars, a cargo mat, a cargo cover, and illuminated scuff plates is just a few hundred dollars, or less, per option. The priciest option box to check is the rear-seat entertainment system, which adds $1,500 to the total cost of the vehicle. All options are available on both trim levels.

The Sorento’s closest competitor, the Toyota Highlander Hybrid, starts at over $38,000 and tops out near $50,000. Granted, the Highlander Hybrid has better technology, more cargo space, a more powerful powertrain, and available AWD.

The Ford Explorer Hybrid is also worthy competition for the Sorento Hybrid, but its heavier construction and AWD drivetrain is not as fuel-efficient as the Kia, by a large margin. It's also far pricier than the Kia. The same is true for the Volkswagen Atlas, which isn't available with a hybrid powertrain, either.

Honda doesn't make a hybrid Pilot SUV, at least not yet. The Pilot has similar dimensions and technology offerings but its dated design means that it is worth waiting for the next-gen Pilot, expected to debut soon.

Putting fuel-efficiency aside, the Highlander Hybrid, Telluride, and Carnival are better vehicles than the Sorento Hybrid. They are better insulated and deliver a quieter ride, are more powerful, and have nicer interiors. That’s not to say that the Sorento isn’t worth taking for a test drive. Liking the Sorento is all about managing your expectations, which includes discovering how well it fits into your lifestyle.

What's your take on the 2021 Kia Sorento Hybrid?

Have you driven a 2021 Kia Sorento Hybrid?
Rank This Car

Enter your zip to see incentives for a new Sorento Hybrid in your area.

Looking for a Used Sorento Hybrid in your area?