Looking for a New INFINITI Q50 in your area? 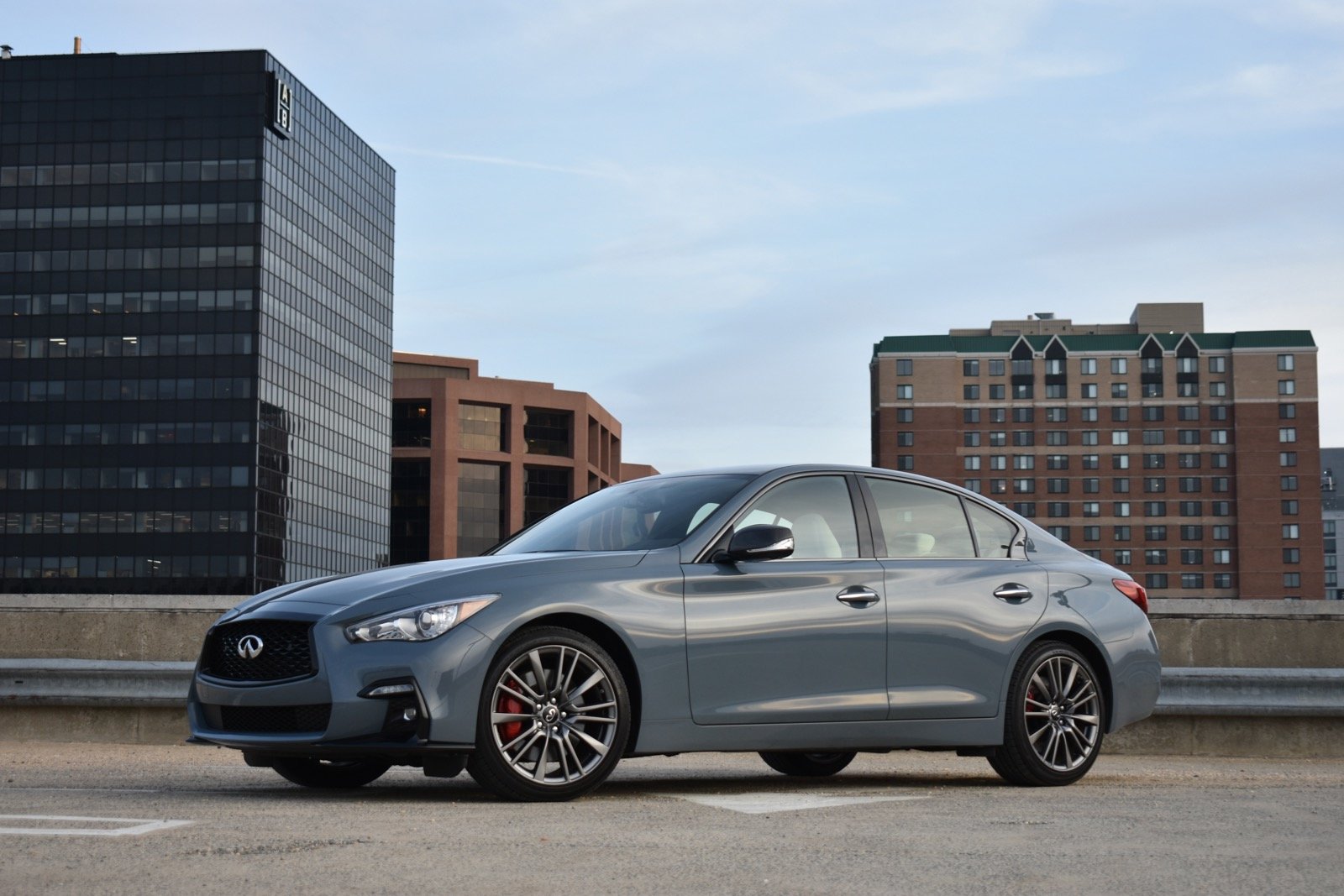 As the 2003 model year dawned, Nissan’s Infiniti luxury brand had finally succeeded at matching the German establishment with the G35—a legitimate challenger to the epochal BMW 3 Series. But while BMW has been able to build on its success, Infiniti failed to maintain momentum. The G35’s descendent—the 2021 Infiniti Q50—is a case in point.

Like the G35, The Q50 emphasizes style and sportiness, but with some questionable decisions made along the way. It’s also getting old. The Q50 was introduced for the 2014 model year, and rivals, including the 3 Series, Audi A4, Mercedes-Benz C-Class, Acura TLX, Lexus IS, and Volvo S60, have all been redesigned or heavily updated since then. The Cadillac ATS, meanwhile, has morphed into the CT4, while the Genesis G70 didn’t even exist when the Q50 launched.

With Infiniti putting most of its resources into SUVs, the Q50 only gets mild updates for the 2021 model year. The only changes are a new Sensory trim level, more driver-assist tech, and a built-in WiFi hotspot.

In addition to the new-for-2021 Sensory, Infiniti also offers entry-level Pure, Luxe, and Red Sport 400 trim levels, along with a choice of rear-wheel drive or all-wheel drive. Our test car was a Q50 Red Sport 400 AWD—the sportiest version available. 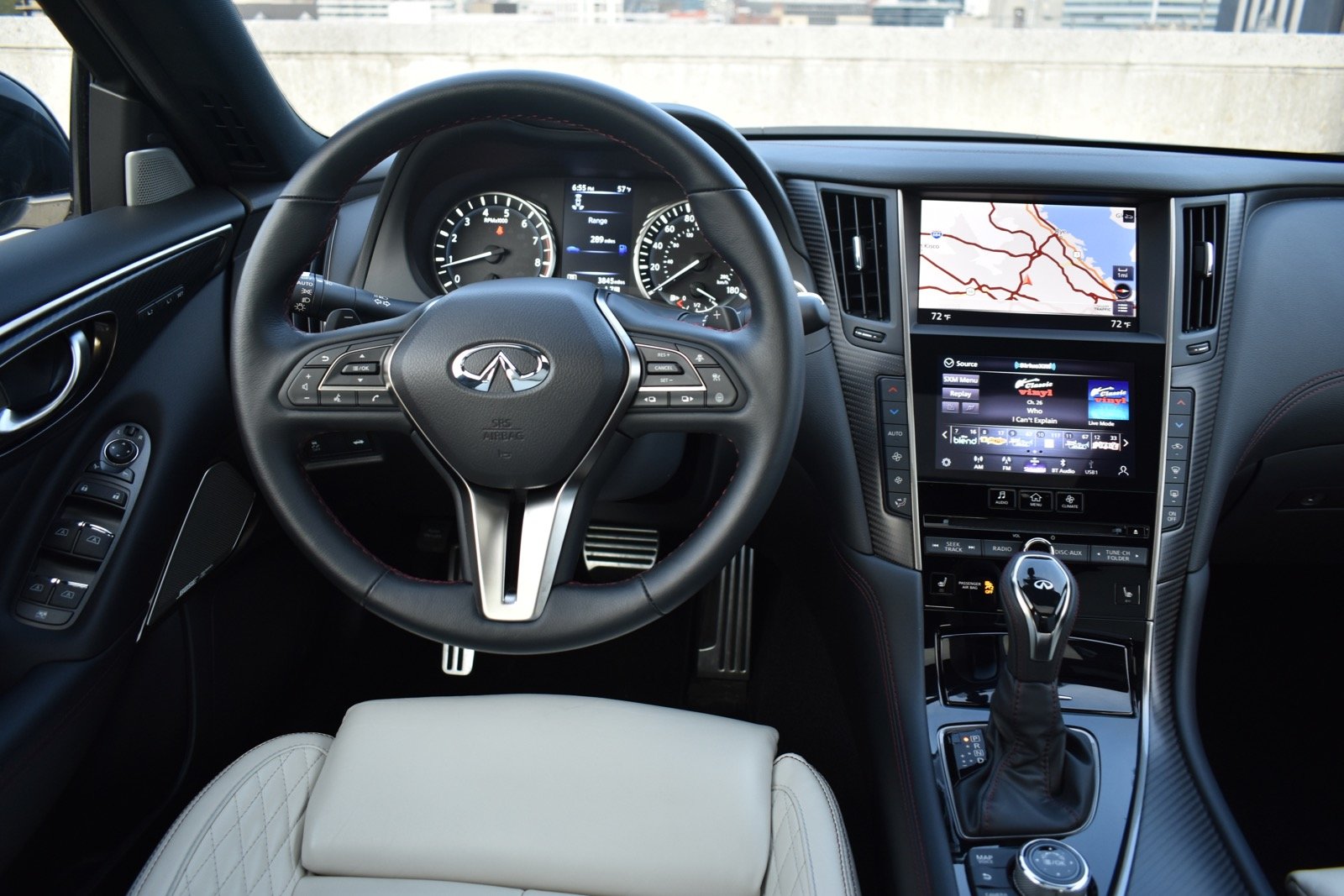 It may be a familiar shape, but the Q50 has only gotten better looking over the years, in our opinion. That’s because it’s a fundamentally good design, with nice proportions and just the right amount of detailing. Instead of adding lots of scoops and vents, Infiniti’s designers focused on the basic shapes of things like the headlights and taillights, which have nice curves that flow with the bodywork, or the doors, which have sharp creases like a fastidiously-ironed pair of pants.

While some rival sedans are fresher, we’re not sure that they are better looking. The Cadillac CT4 has much fussier styling than the ATS it replaced, while the BMW 3 Series’ designers seemed more concerned with brand management (that twin-kidney grille keeps getting bigger) than creating a timeless shape.

The 2021 Infiniti Q50 Red Sport 400 also gets a dash of carbon fiber, in the form of mirror caps and a rear lip spoiler. However, at $1,520, it’s not a cheap option. Red Sport models also get red brake calipers and 19-inch wheels, while both the Red Sport and Sensory grades get a sportier-looking front bumper with larger air intakes and dual exhaust.

The interior is where the Q50 starts to fall apart. The styling is nice, with a distinctive waterfall-like element that divides the dashboard and houses the infotainment system. However, material quality was uneven. Our Red Sport test car had semi-aniline leather upholstery and some carbon-fiber trim, but nearly everything else—including the paddle shifters—was cheap-looking plastic. Keeping in mind that this was one of the higher trim levels (Pure and Luxe models have leatherette upholstery), the Q50 felt more like a gussied up version of a regular car than a true luxury car. 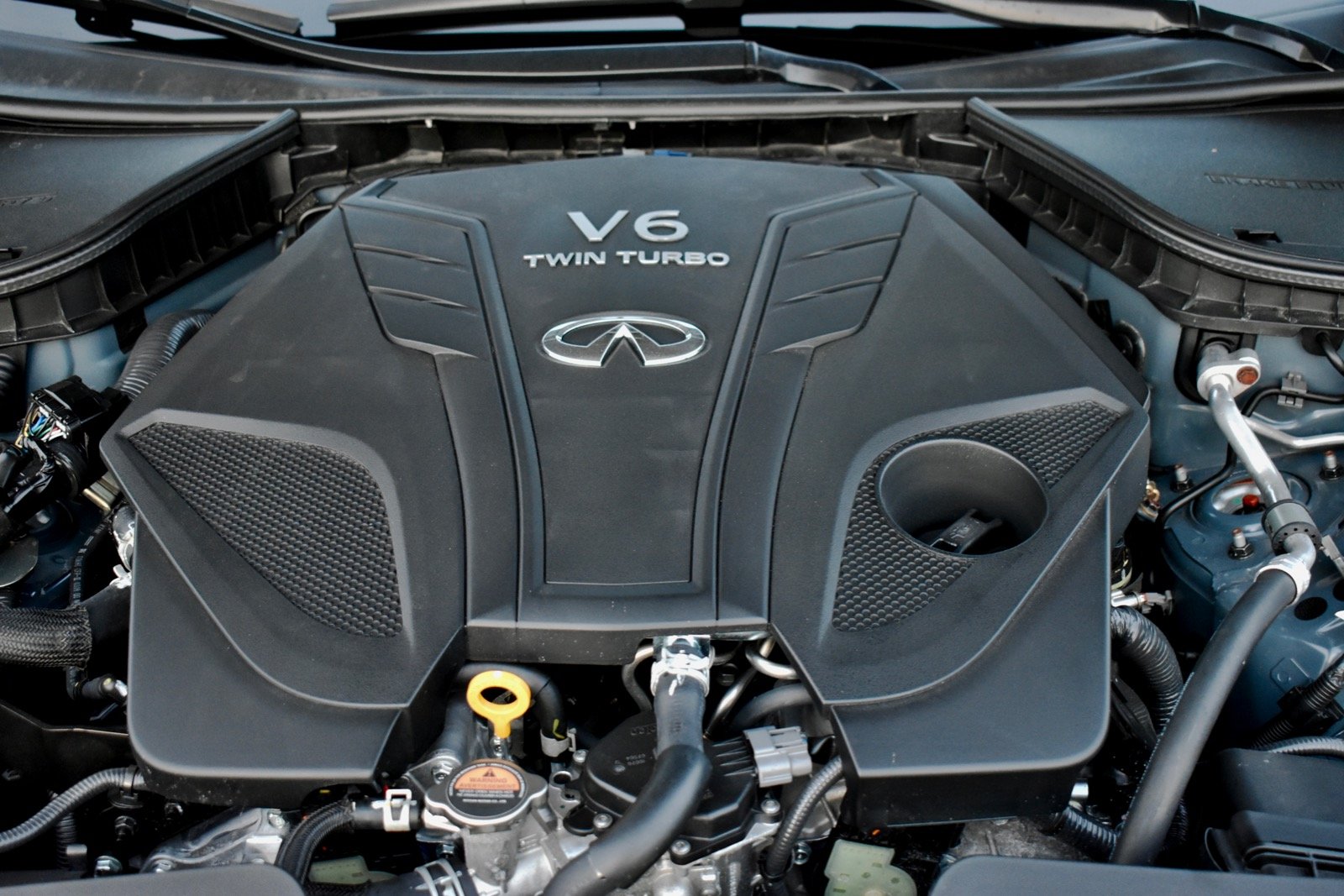 Infiniti previously offered naturally-aspirated V6 and hybrid powertrains, but today every Q50 model gets a 3.0-liter twin-turbocharged V6, connected to a seven-speed automatic transmission. Codenamed VR30DDTT and introduced for the 2018 model year, the engine makes 300 horsepower and 295 pound-feet of torque in most Q50 models, and 400 hp and 350 lb-ft of torque in the Red Sport 400. It’s also expected to be the engine for the next Nissan Z sports car, so it should be more than enough for a sports sedan, right?

Right. The Q50 Red Sport 400 has more horsepower than the Audi S4 and BMW M340i—the sportier versions of the A4 and 3 Series—although the Bimmer has more torque. With our test car’s all-wheel drive (AWD) and quick-shifting seven-speed automatic, the Q50 pulled away from stoplights like it had warp drive. At low speeds, the engine also had a nice, gravelly sound, which makes you feel like you’re taxiing for takeoff in a Cessna. That started to fade away at higher speeds, however.

The drivetrain wasn’t the only thing that impressed us. The Q50 cornered nice and flat, with minimal body roll, and went down highway straights like an arrow. Infiniti says the Q50 was aerodynamically set up for zero front-end and rear-end lift, and we believe it. Driving on the highway, the Q50 had the solid feel you should expect from a luxury sedan.

However, that chassis poise comes at a price: a punishing ride. Stiff suspension is a typical tradeoff for good handling, but Infiniti took things too far here. Every road imperfection could be felt in the cabin, and impacts with large bumps or potholes were enough to make CDs skip (yes, the Q50 still has a CD player). Our Red Sport 400 test car had “Sport” and “Sport+” drive modes, but we think Infiniti should have gone in the other direction and added a “Comfort” mode. The car was sporty enough in “Normal” mode; what it needed was a way to dial back the intensity.

The steering was another problem area. Despite the excellent chassis, you have absolutely no idea what the front wheels are doing. Our test cars had the base electronic power-steering rack, but Infiniti also offers Direct Adaptive Steering, a steer-by-wire system with no mechanical connection between the steering wheel and the road. This was supposed to be the Q50’s main technical innovation when the sedan debuted for 2014, but in past test drives, we’ve found it to be even worse than the base steering system, with an even more artificial feel and total lack of precision that made it hard to place the car confidently on the road. 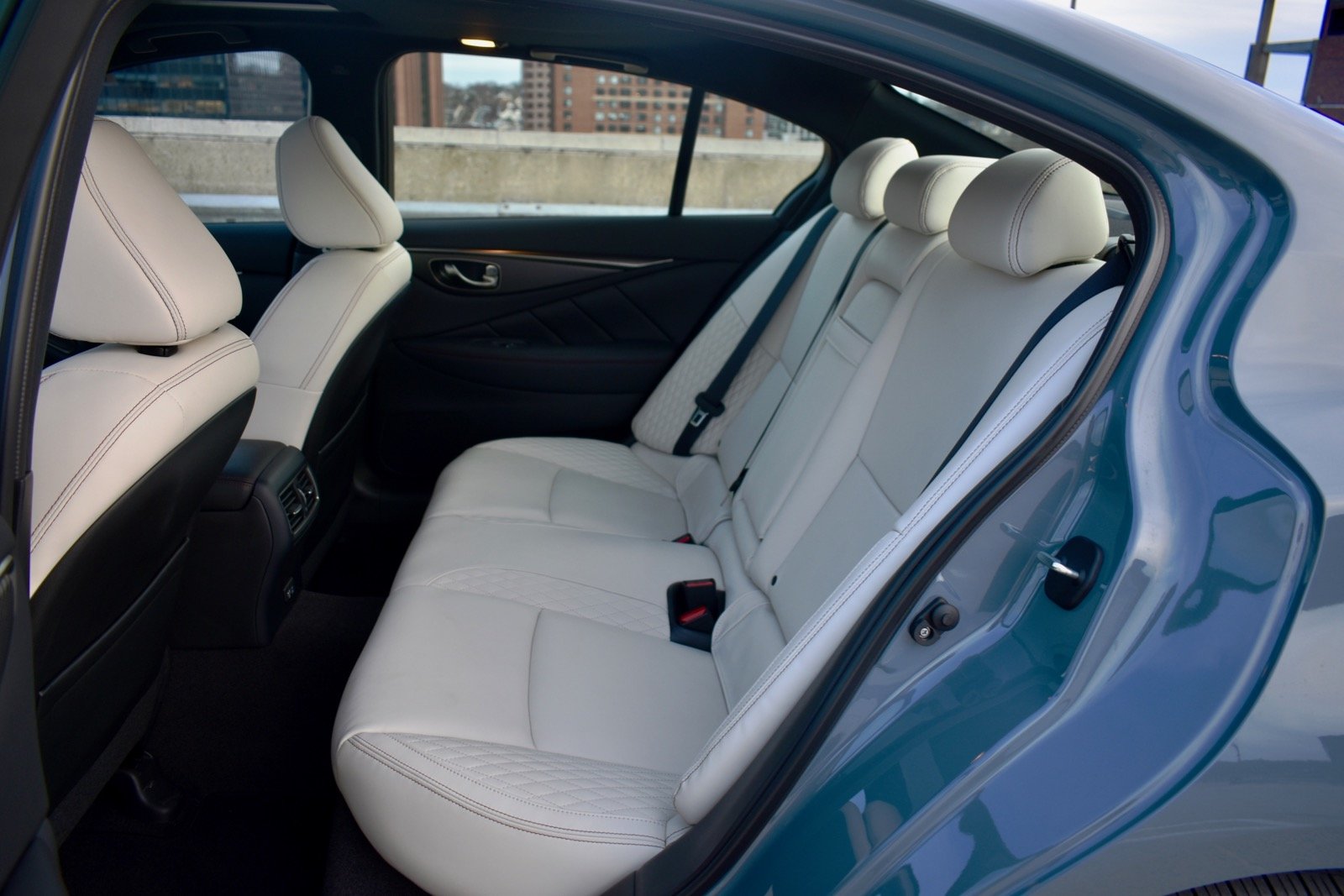 Subjectively, we found the driver’s seat to be very comfortable, with a good balance between cushioning and the side bolstering needed to hold you in place during cornering. The rear seats felt cramped, in part due to the sloping roofline, but that’s the case in most small sports sedans.

At 13.5 cubic feet, the Q50 is tied with the Acura TLX for most trunk space in the segment. The Q50 gets a standard 60/40 split-folding rear seat to accommodate larger items, but Infiniti doesn’t publish a cargo-space figure with the seat folded.

Storage space for small items is limited. The narrow center console’s two small compartments won’t hold much, and there is no good place to hold a smartphone (even the cupholders are too small). A drive-mode selector toggle and a rotary controller for the infotainment system take up a lot of space on the console, and we wouldn’t want to accidentally spill a drink on either of them. 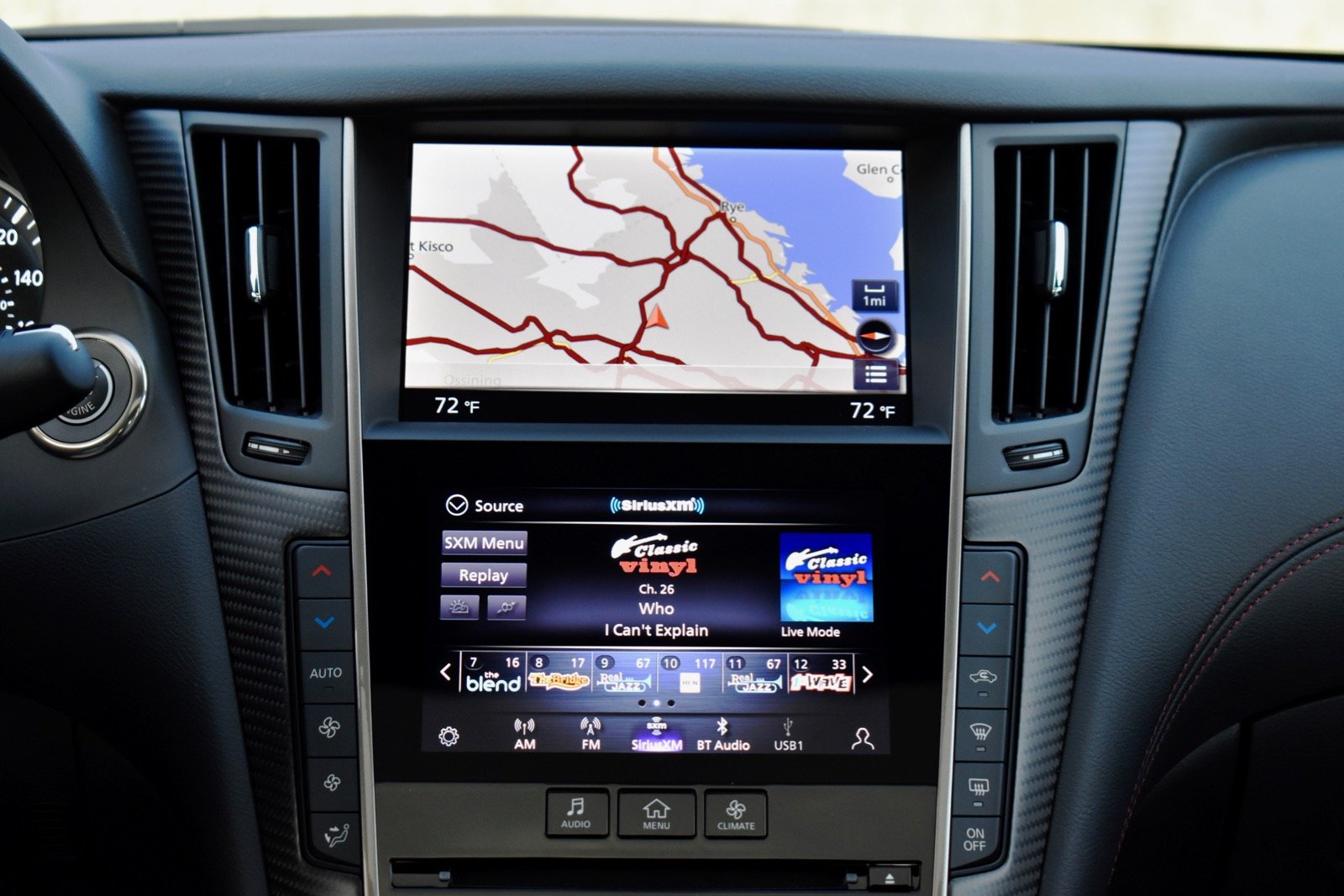 The stacked screens fit nicely into the dashboard, something that can’t be said of the awkwardly-placed screens in many other cars. The setup also lets you, for example, view the navigation map and the current radio station at the same time, without having to toggle between them.

However, the graphics on both screens would have looked out of date even during the Q50’s 2014-model-year launch. Maps in particular seemed to have been designed by someone nostalgic for Windows 95. That’s definitely not what you want to see in this price range, from a luxury brand.

The infotainment system was also unnecessarily complicated. Infiniti provides lots of hard buttons, plus a rotary controller on the center console, but it’s hard to know which controls to use for what function. While the Q50 does have voice recognition, it’s a lot less sophisticated than the natural-language systems you get in a BMW or Mercedes these days, so that’s not exactly foolproof either. 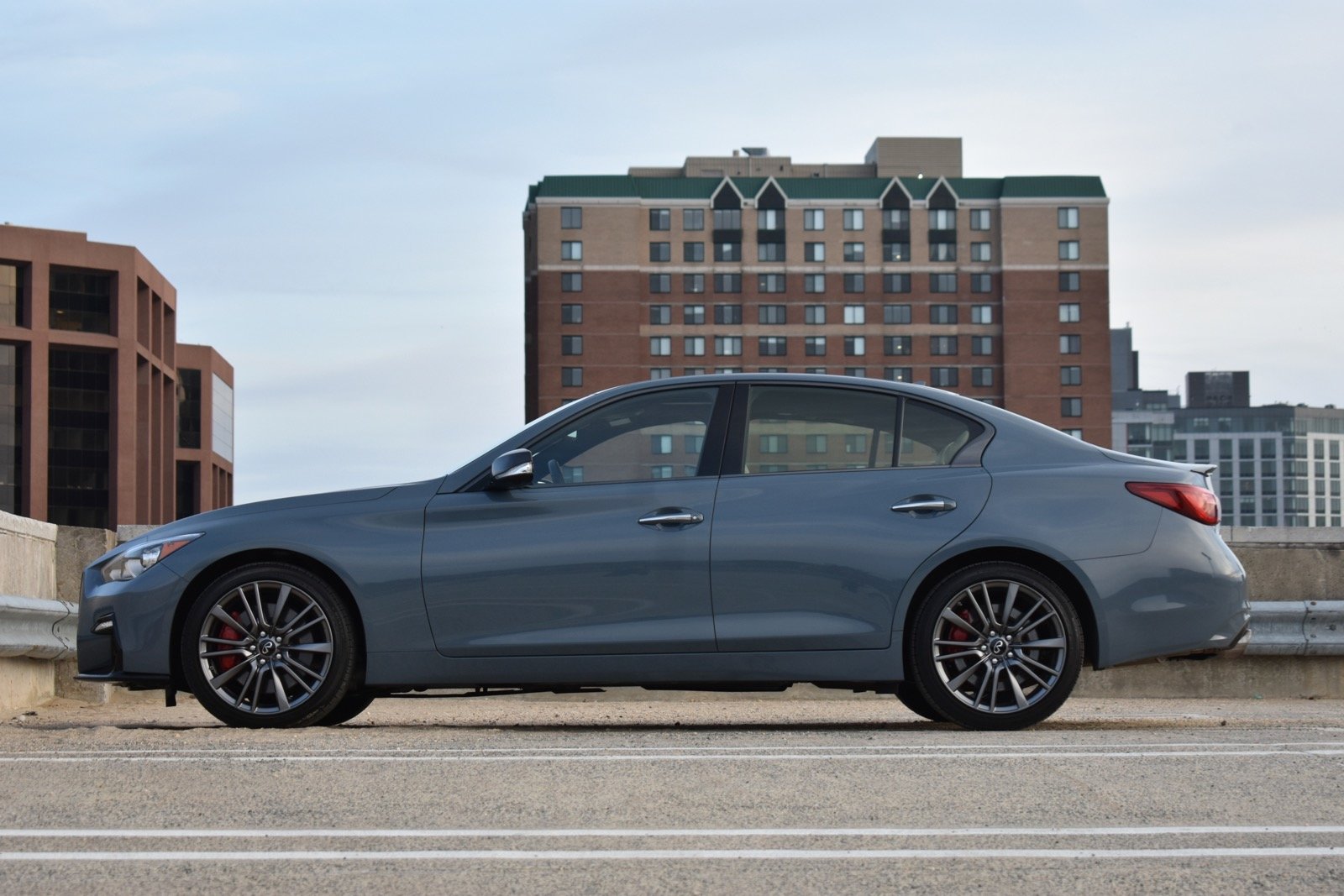 Luxury automakers are often stingy on standard safety features, and Infiniti is no exception. Forward-collision warning and automatic emergency braking are standard, but you have to upgrade from the base Q50 Pure trim level to the Q50 Luxe to get adaptive cruise control, blind-spot monitoring, and lane-departure warning. The Luxe trim level also adds an Around View Monitor 360-degree camera system.

Q50 models with Direct Adaptive Steering also get Active Lane Control, which essentially takes the place of lane-keep assist by using small steering inputs to keep the car from veering out of a lane. This anticipated the automated lane-centering features now available on many cars from mainstream and luxury brands alike, but today it’s hardly a standout feature.

While the list of available features covers the bases, Infiniti doesn’t offer anything next-level. The Q50 doesn’t get the ProPilot Assist system available on the Infiniti QX50 crossover (as well as some models from the parent Nissan brand) nor does it have the laundry list of safety tech offered by Mercedes or Volvo. 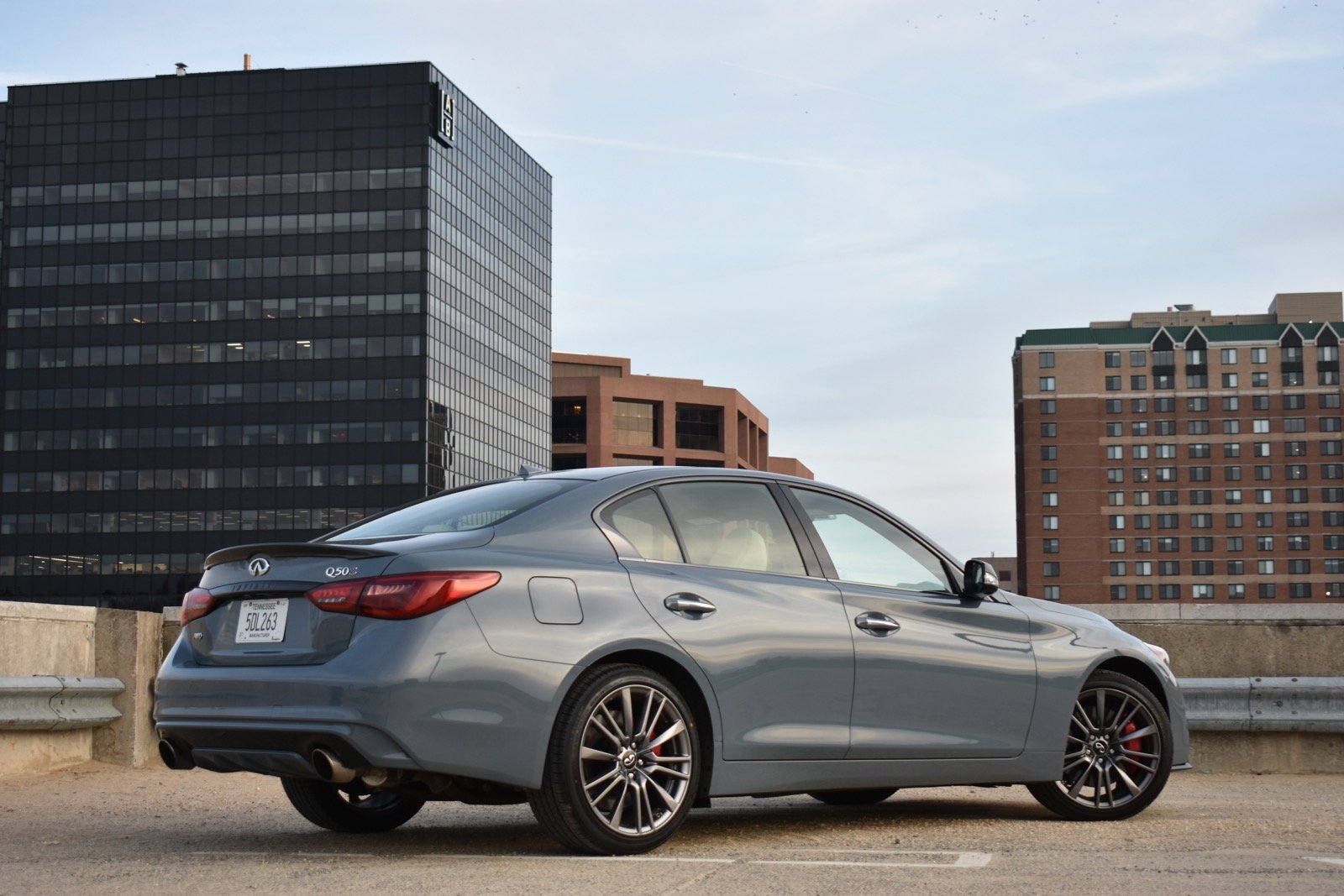 Pricing for the 2021 Infiniti Q50 starts at $37,625 for a base Pure model with RWD, rising to $57,750 for the range-topping Red Sport 400 with optional AWD (all prices include a mandatory $1,025 destination charge). That’s the model we had for this review, but options like Slate Gray premium paint, carbon-fiber exterior trim, and rear USB ports inflated the MSRP further, to $62,355.

That difference between the base price and the as-tested price is typical of luxury cars: getting the best version often means spending a lot of extra money. You’ll likely experience the same thing shopping around at other luxury dealerships, with Genesis being the notable exception. The Q50 is at least fairly well equipped, offering more power than most rivals for similar money. Most of the features rivals offer that Infiniti can’t match—like more elaborate infotainment systems or more sophisticated driver-assist tech—are also extra-cost options, anyway.

The Q50 is competitively priced, then, and really only shows its age in infotainment and driver-assist tech. We also loved the styling, the powerful twin-turbo V6 engine, and the agility of the chassis. Yet rivals offer a better balance between performance and everyday usability, as well as more luxurious interiors. Subjectively, the Q50 is a great car and would be a solid choice as a discounted used car. Objectively, however, the competition offers more to new-car buyers.

Enter your zip to see incentives for a new Q50 in your area.