Looking for a New Hyundai Venue in your area? 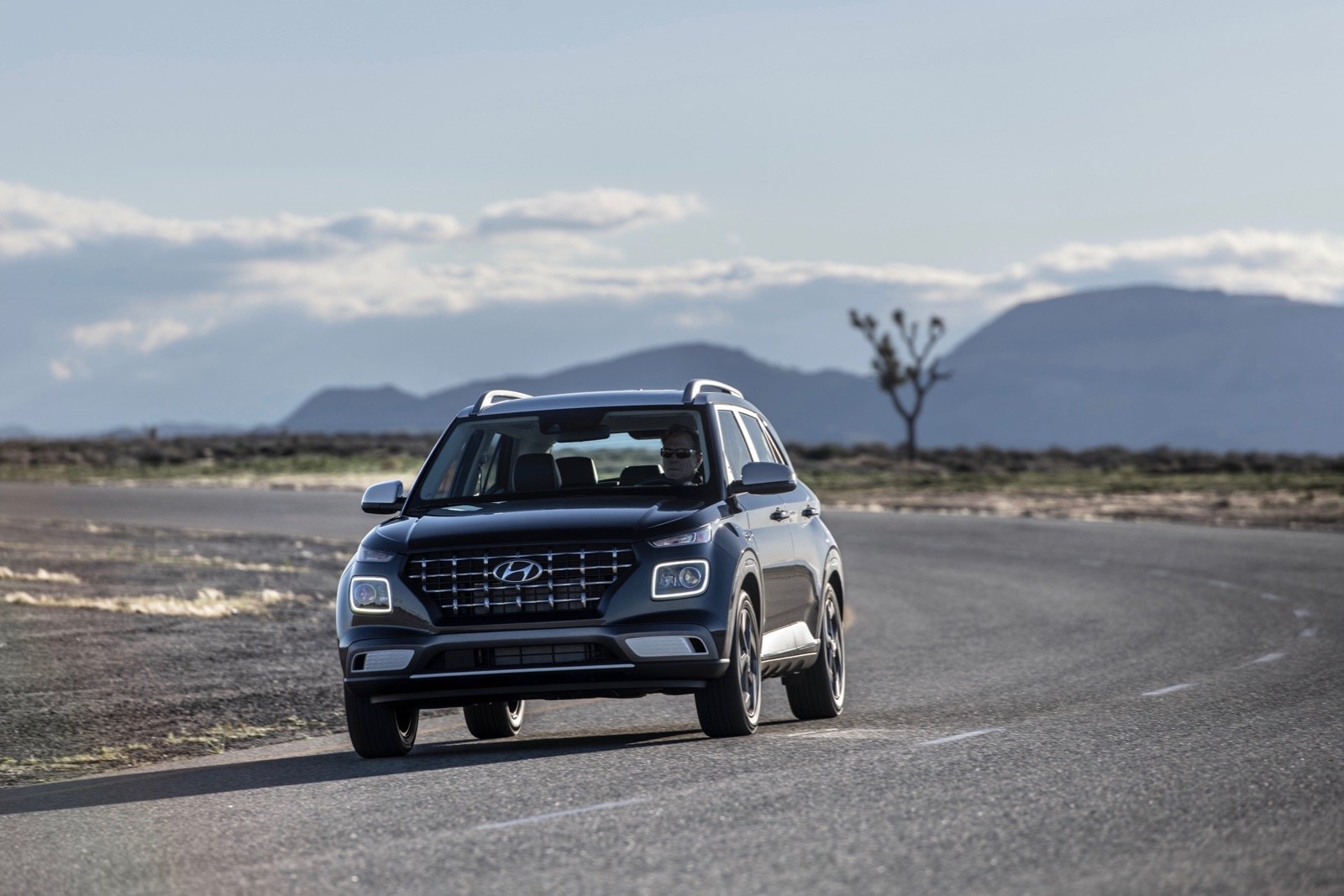 This is the future of basic transportation. Shoppers are shifting from sedans and hatchbacks to crossovers and SUVs, but the bigger the car, the bigger the price tag. Enter the Hyundai Venue. Roughly the same shape as a typical crossover, but impossibly small, the Venue offers the look and feel of a crossover while maintaining the footprint (and, very nearly, the price) of a hatchback. 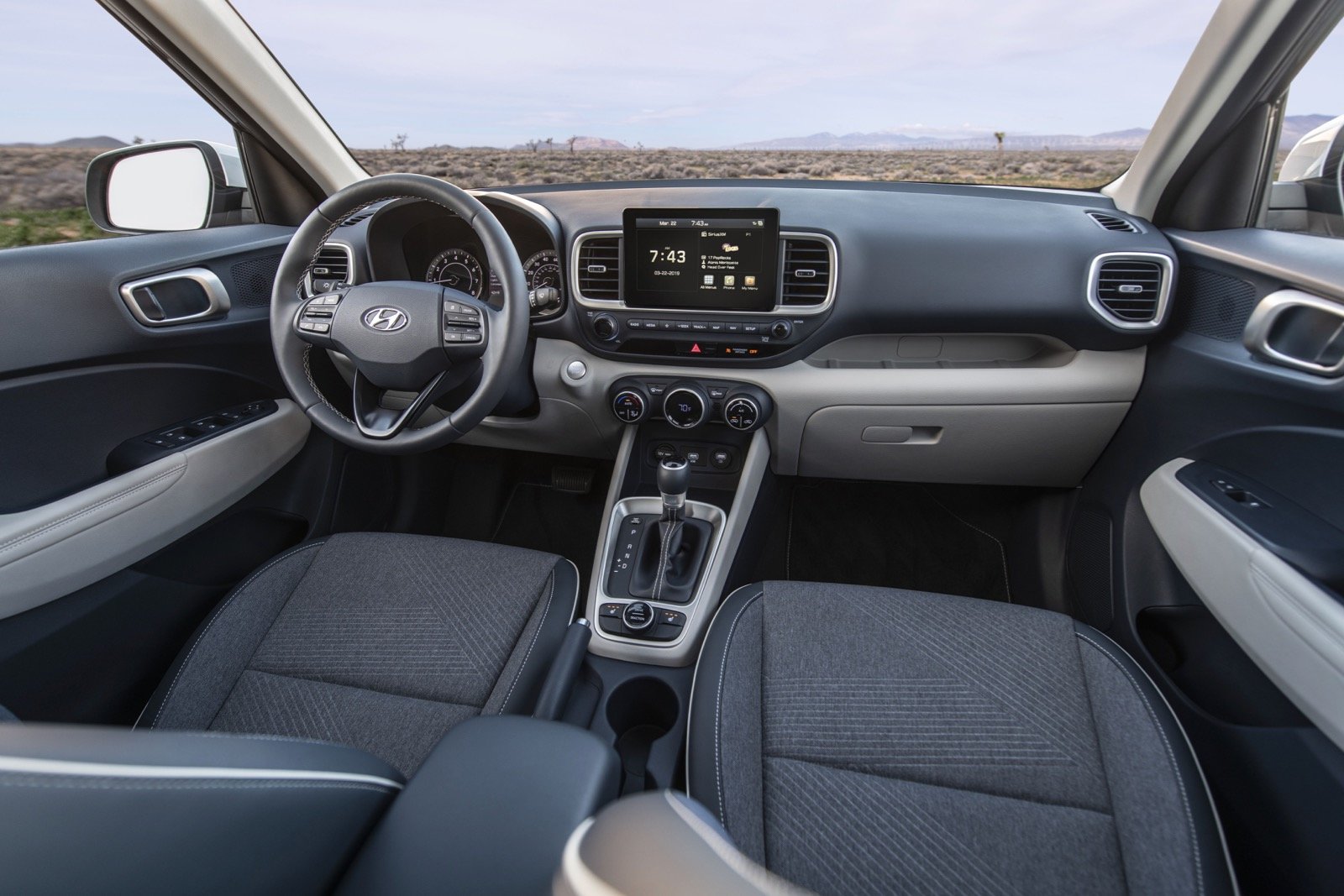 Some cars look great the moment they debut, only to age poorly over the next decade. The Chrysler PT Cruiser was once praised for its both retro and futuristic styling but is now considered a bad joke. One look at the Venue, however, and it’s hard to see this stylish little crossover ever going out of style.

The Venue sits upright. The grille has almost no rake, the roofline looks almost perfectly horizontal, and the tailgate drops steeply, with almost no slope at all. Its shape does nothing to imply that it is a tiny, inexpensive vehicle. Pull it from its surroundings and present it without anything to compare it with, nothing to provide any sense of scale, and you’d just as easily assume the Venue was enormous as you would predict it to be small.

Large, ostentatious grilles have come into vogue during the past decade, but the Venue’s is properly sized. It draws attention, but it doesn’t overwhelm the rest of the car’s design. Roof rails run along the top of the car (proof that this is more than your everyday hatchback). At the back, wide-spaced letters, painted white, spell the Venue’s name. The headlights are split into two pieces, and the taillights showcase an interesting pattern of triangles and diagonal elements.

Hyundai didn’t make many changes to the Venue’s exterior in updating it from the 2020 model year to 2021. The 15-inch steel wheels found on the 2020 model’s base SE trim have been replaced by 15-inch alloys, and the SEL and Denim trims now get 17-inch alloys as standard equipment.

Shoppers motivated most by the Venue’s fashion-forward style will undoubtedly be drawn to the top-line Denim trim. Sporting a white roof paired with its unique paint job, it’s the best-looking option. Pass on the Venue Denim, however, and Hyundai’s SEL trim offers an even better value. That's because, for 2021, Hyundai has discontinued the Venue's Convenience Package, and made the formerly extra-cost features standard on the SEL trim level. That includes the SEL's 17-inch alloy wheels, sliding armrest and storage box, leather-wrapped steering wheel and shift knob, and a selection of advanced driver-assistance systems (ADAS).

Yes, plastic is everywhere inside the Venue, and very little of it is finished in any kind of soft-touch material. And, although our SEL test car had the optional power sunroof, it looked cheap; the mechanical tracks for the sunroof were plainly visible (and covered in white grease).

On the bright side, the Venue’s shape allows for plenty of light to reach inside the cabin. Thin A-pillars, big windows, and an upright windshield make this little car feel like a veritable greenhouse. We enjoyed the heated seats in our SEL trim, and the interior still manages to look modern despite its low-cost build. 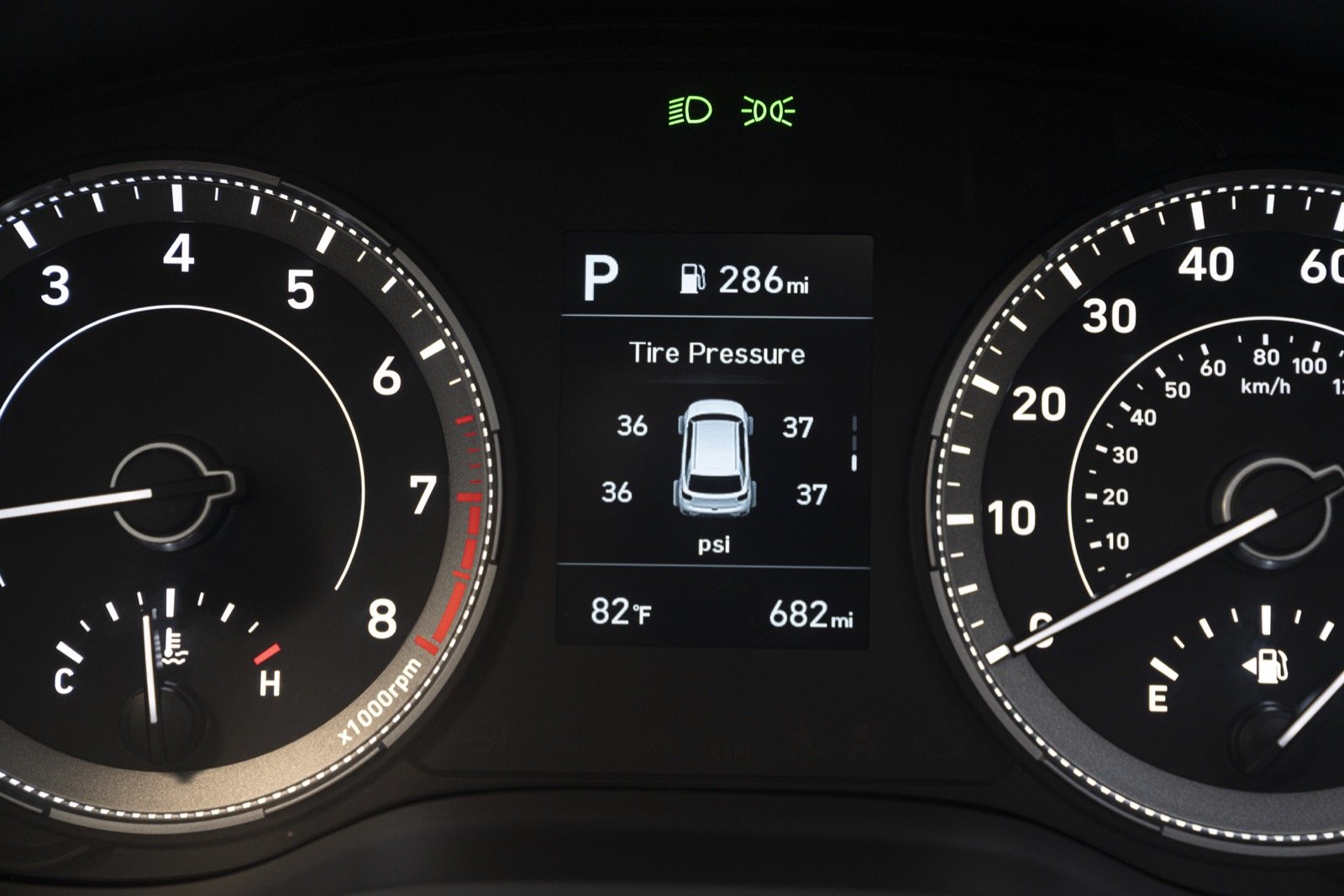 Hyundai has slotted its 1.6-liter four-cylinder engine into the space beneath the Venue’s hood. As you can imagine, it fits with plenty of room. This is a small, economical engine aimed at delivering enough power to move a small, economical car just quickly enough to keep complaints at bay. Without a turbocharger, it manages 121 horsepower and 113 pound-feet of torque. For those hoping for a more potent powertrain, they’ll need to look elsewhere. There is no other option--there are no turbos, V6 choices, or even larger four-cylinder variants.

121 horses and 113 pound-feet leave the Venue mired in the middle of the segment. The Nissan Kicks, Ford EcoSport, and Toyota C-HR all offer similar performance, although none are as small or as light as the Venue.

Front-wheel drive (FWD) is the only option, despite the Venue’s crossover costume. All-wheel drive (AWD) is not available, but you can buy a Venue with a selectable drive mode calibrated for snowy conditions. A continuously variable automatic transmission (CVT) manages all that power adequately. It’s also the only choice for 2021, as Hyundai discontinued its six-speed manual transmission from the base SE trim following the Venue’s 2020 model-year debut.

While the combination of the 1.6-liter four-cylinder and a CVT doesn’t offer the most thrilling or confident driving experience, the Venue’s slim weight does make the car move somewhat spritely through lower-speed areas. As it is, big horsepower numbers are mighty helpful on the highway, but when you’re only moving 2,612 pounds, even 121 ponies can feel lively when pulling away from a stoplight. 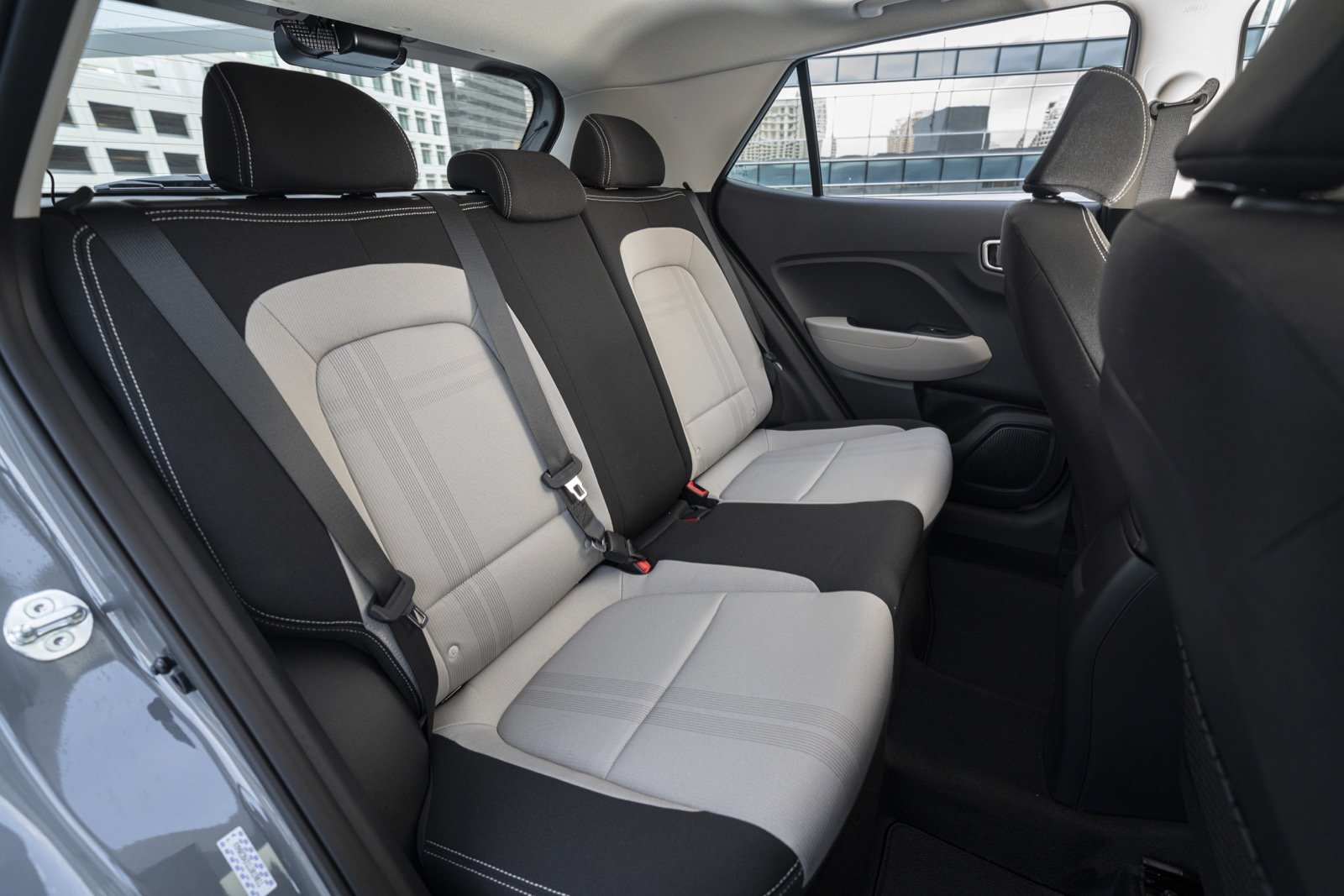 Considering its size, the Venue’s front seats provide plenty of headroom and legroom. There is a decent amount of storage space, too. Hyundai has left a handy tray clear ahead of the gear selector, big enough for a phone or wallet, but not both. There’s also a tray ahead of the front passenger. The center console’s bin is too small to use as a collecting point for all your random odds and ends, but it’s large enough for a small notebook, a pen, and other necessities. Automatic climate control has no problem cooling or heating the Venue's small cabin.

The two cupholders between the driver’s seat and the front passenger are basic. There are no rubber or plastic grips to keep a hold on drinks, so a spill is likely inevitable when you take the Venue through a bumpy or twisty road.

The Venue’s back seat is a fair bit tighter than the front. Legroom won’t be enough for a fully grown adult for more than a short drive, although there is plenty of headroom.

Cargo space is also predictably short. Yes, the Venue’s hatchback design allows for more stuff than a compact sedan, but it’s less than most hatchbacks. 18.7 cubic feet with the back seat in place, and 31.9 with it down is just not a lot; these numbers lag behind the Mazda Mazda3 hatchback, Subaru Impreza hatchback, and Honda Civic hatchback. Compared to those cars, the Venue does offer a little extra ground clearance, but if cargo capacity is a priority, you’re likely better off looking elsewhere.

Line the Venue up against its direct competition, and it still offers the short end of the stick, both behind the rear seat and with all seats folded, the smallest Hyundai provides less cargo volume than the Nissan Kicks, Toyota C-HR, and Ford EcoSport. If you want the biggest trunk and seating for five, pick the Kicks. If max cargo space is your goal, the EcoSport offers a whopping 50 cubic feet (but not much else). 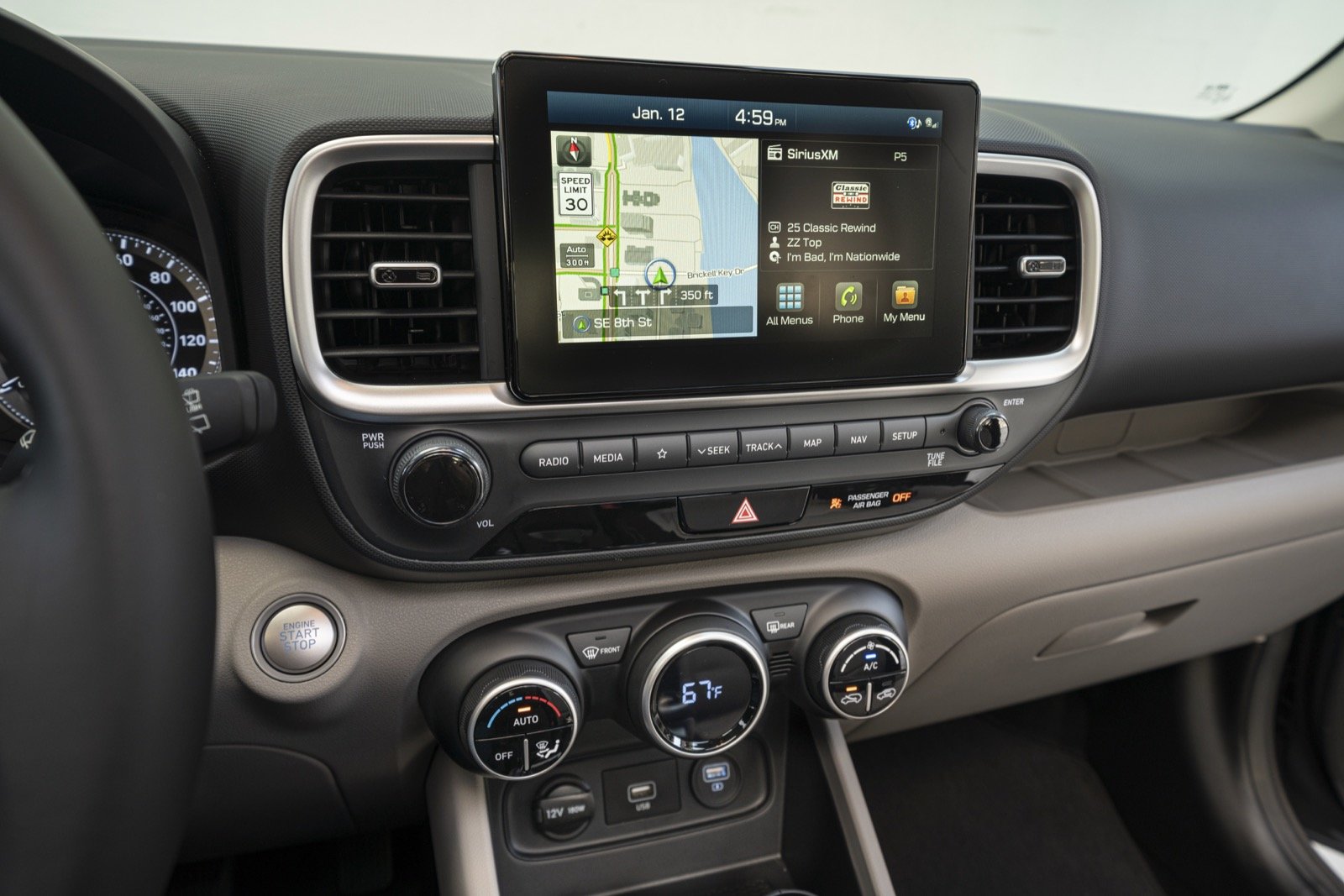 Hyundai has done a terrific job as of late updating its technology across nearly every model. The Venue benefits from a renewed focus on tech; despite the car’s meager price, it’s loaded with attractive and appealing features.

An 8-inch touchscreen sits toward the top of the dash, situated between two air vents. Just below the screen, on our SEL tester, a row of physical buttons gives quick access to the radio and other media sources, navigation, and settings. There’s also a starred button, which can be customized to go to a function of your choice. Seek/track buttons are also available, there’s a tuning knob and a large volume/power knob. Hyundai has clearly designed this interface for simple, easy use.

The screen itself has high resolution. Swipe functionality works quickly and with little jittering or lagging. Charmingly, Hyundai’s latest radio interface displays station numbers within classic tube-amp-style bulbs. It’s a small thing, but this is the kind of detail that’s sure to capture attention and win you some compliments.

The Venue’s infotainment system also allows you to set up various driver profiles, customized with radio presets. This is undoubtedly appealing to families with multiple drivers (who don’t like the same music). Bluetooth, Apple Carplay, and Android Auto are also included as standard features. The Base Hyundai Venue SE will be getting wireless CarPlay in the future, but the upgraded infotainment systems in the SEL and Denim will not. 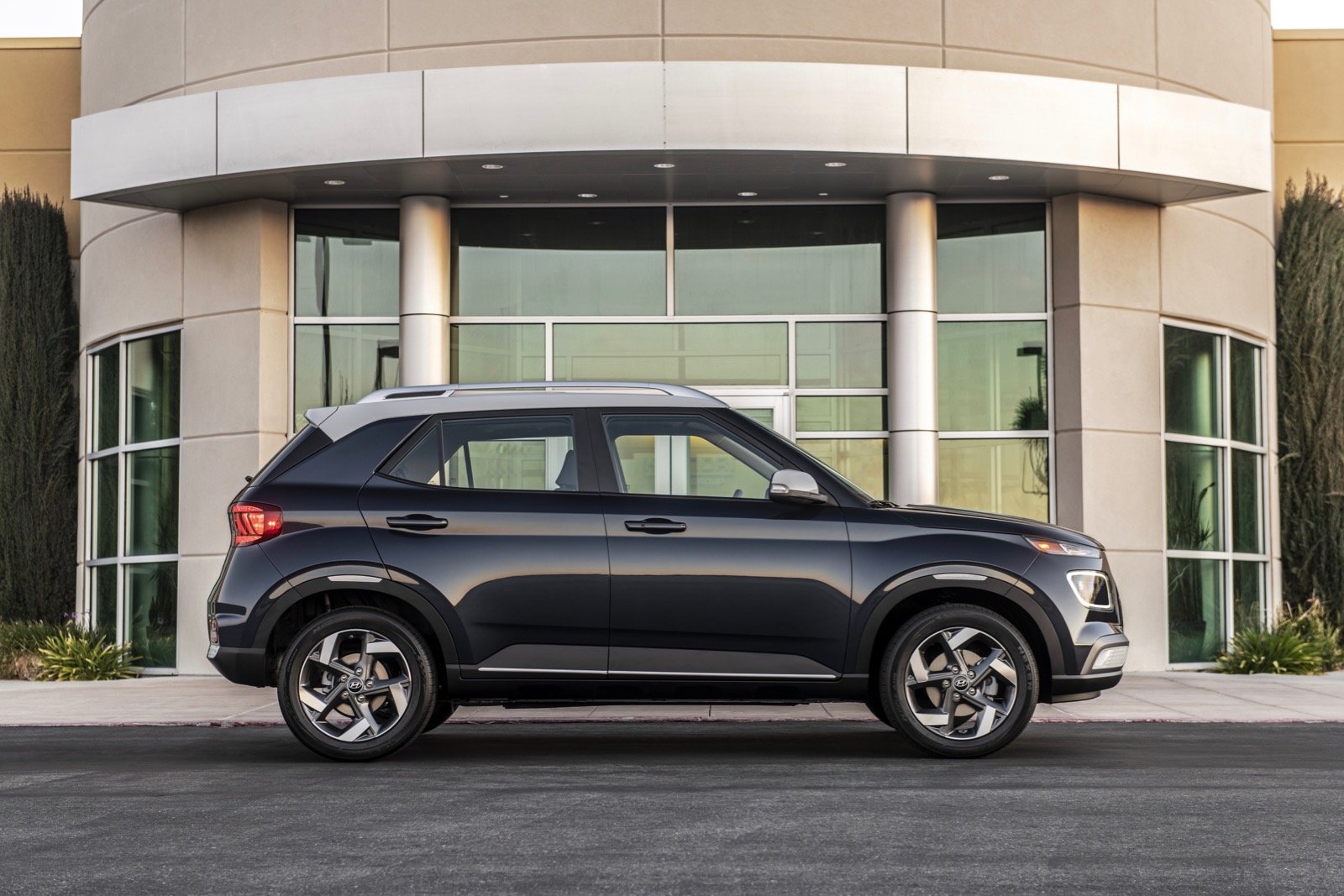 Considering the Venue’s minute size, it’s easy to assume that any sort of accident would leave occupants as uncomfortable as sardines in a smashed tin. However, while you never want to put a 2,600-pound car up against a three-ton Nissan Armada, the Venue should do an admirable job preventing that sort of calamity.

Automatic emergency braking, lane-keeping assist, and driver-attention warning are standard on all trims, while the Venue SEL and Denim trims add blind-spot monitoring with rear cross-traffic alert. Best of all, Hyundai’s ADAS are seamlessly integrated to allow for normal driving behavior. While so many other vehicles employ beeps, shudders, vibrations, and warnings, the Venue’s alerts didn’t distract or annoy enough to convince us to turn any of them off.

Of course, all of these features are meant to prevent an accident. When it comes to actual crash tests, the Venue managed four out of five stars in the National Highway Traffic Safety Administration’s (NHTSA) driver-side- and passenger-side front collision, and four out of five for rollover. 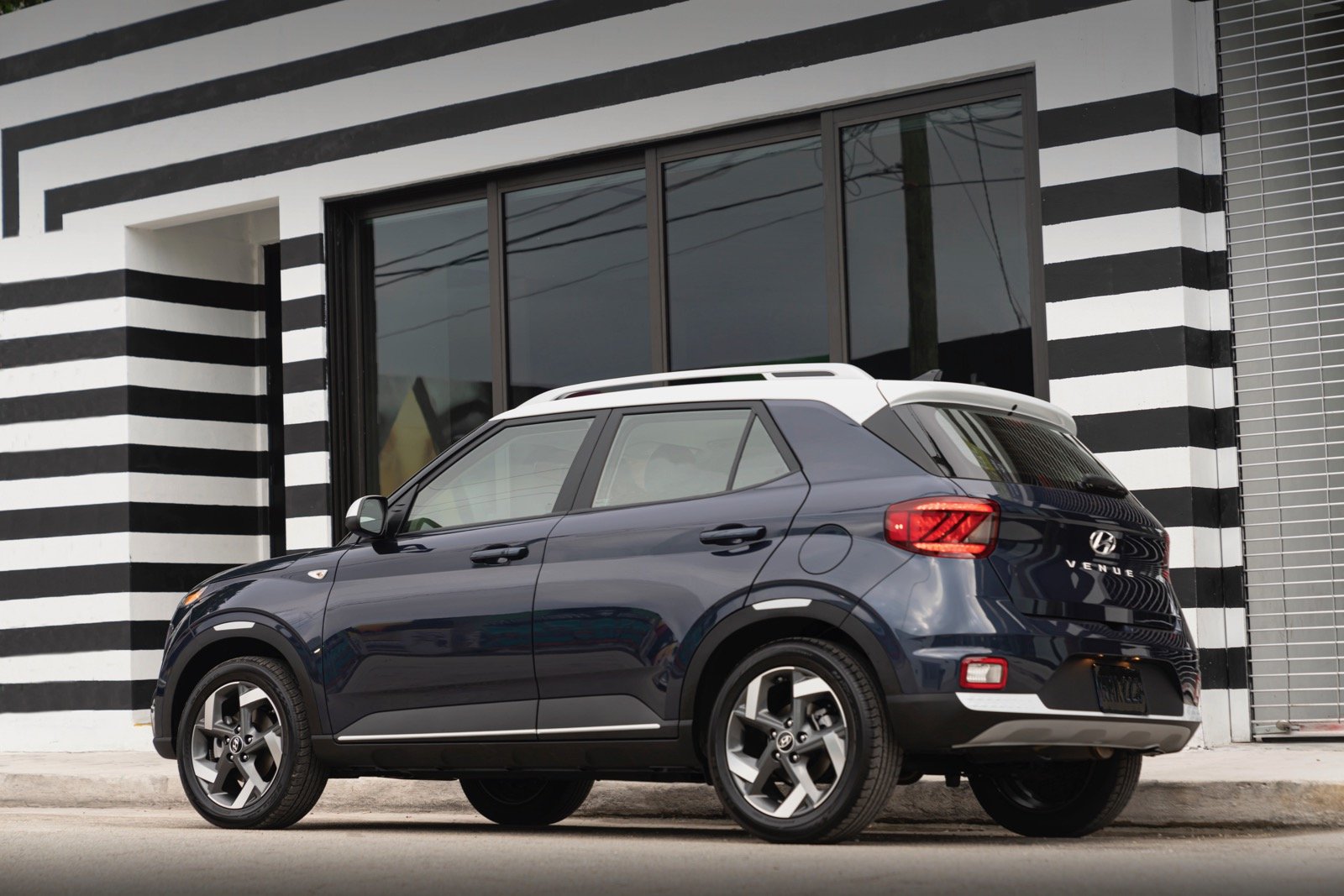 It’s all too easy to disparage a car for having too little power, too crude an interior, or too rudimentary a chassis. However, to criticize the Venue for any of those demerits would ignore the context of the car.

Which, of course, is its price.

Pricing for the 2021 Hyundai Venue starts at an MSRP of $18,750 for the base SE trim. The SEL starts at $19,800 (and its appealing Premium Package runs an extra $2,350), and the top-level Denim trim costs $22,050 with no major option packages. Those are incredibly compelling price tags for a new car.

Owning one won’t hurt the bank account, either. Not only does the Venue benefit from Hyundai’s 10-year, 100,000-mile warranty, but it also returns solid fuel economy. An EPA estimate of 30 mpg in the city, 33 on the highway, and 31 combined make trips to the gas pump a bit more bearable.

Simply put, the Venue shows off design and technology that far exceed its price.

Guru7SMQX It’s ugly , for a gay or nerdy person

Have you driven a 2021 Hyundai Venue?
Rank This Car

Enter your zip to see incentives for a new Venue in your area.