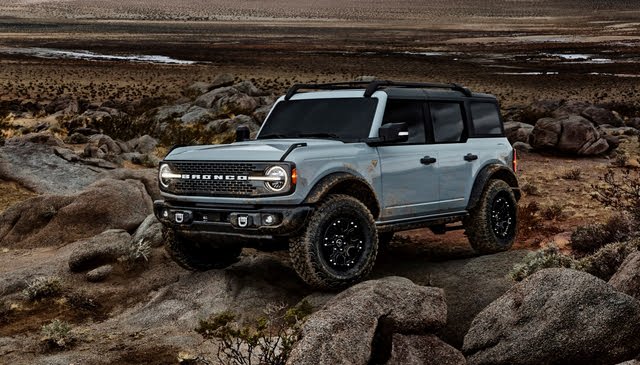 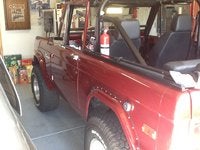 Looking for a New Ford Bronco in your area?

After a quarter century’s absence, the bold, brash, Bronco returns for 2021 to wreak havoc both on- and off-road. After being one of the first SUVs on the market back in 1966, the Ford Bronco survived the horsepower wars and the oil crisis only to be replaced in 1996 by the Ford Explorer and Expedition. Few realize the Bronco was developed as a sister project to the then-young Mustang, offering the same versatility and flexibility that allowed you to outfit your sports car to fit your lifestyle. In that same vein, the new Bronco will be offered in two-door and four-door configurations, all powered by Ford’s turbocharged four- or twin-turbo six-cylinder engines.

With a familiar, “heritage-inspired” boxy body and a grille that evokes the original Bronco, the new Ford Bronco is following in the footsteps of retro-inspired cars we’ve seen lately. These designs have been concentrated in the sports car arena, but have included icons like the Volkswagen Beetle, Fiat 500, and Toyota FJ Cruiser. Built on the Ford Ranger pickup truck platform, the Bronco is offered with standard 4-wheel drive (4WD), though a more advanced 4WD system with automatic 4H and an electromechanical two-speed transfer case is available. Every Bronco will also come with up to seven selectable drive modes: Normal, Eco, Sport, Slippery & Sand, Baja, Mud/Ruts, and Rock Crawl.

Fans have already begun deriding the fact that the Bronco won’t be offered with a V8, but the original Bronco wasn’t offered with a V8 until its second year of manufacture, so there’s still hope. For now, buyers will choose between the standard 2.3-liter EcoBoost engine, delivering 270 horsepower and 310 pound-feet of torque through a standard Getrag 7-speed manual transmission (yes, manual!) or a 10-speed automatic transmission. Not comfortable with only four cylinders under the hood? Go with the optional twin-turbo EcoBoost V6 drivetrain for 310 hp and 400 lb-ft, though this engine is available with only the 10-speed automatic transmission. There hasn't been any talk of a hybrid powertrain for the new Bronco. A smaller Ford Bronco Sport will also be sold as a separate model. This "Baby Bronco" will feature a smaller footprint and a 3-cylinder turbo engine.

Likely taking aim at the Jeep Wrangler and Toyota 4Runner (and their veritable stranglehold of the off-roader market), Ford is banking on the enthusiast crowd to bolster the return of its beastly Bronco. It has built four off-road courses built around the country where owners can test the mettle of their new metal. Dubbed Off-Roadeo adventure playgrounds, they’re part of a new branding initiative by Ford that takes the old “Build Ford Tough” tag and updates it to read “Built Wild”. To back that up, the Bronco has been fitted with a best-in-class ground clearance of 11.6 inches, along with a 29-degree maximum breakover angle and a 37.2-degree maximum departure angle. Neither water nor rocks will stand in your way either, as the Bronco can boast best-in-class water fording capability up to 33.5 inches and suspension travel that exceeds its nearest competitor by 17 percent.

Interior styling details are scant at this point beyond being offered with removable doors and a removable roof. Ford has mentioned that the interior will be just as tough as the exterior, with available rubberized floors with drains, marine-grade vinyl upholstery, and wipeable waterproof surfaces for all instrument panels. You’ll also get pre-wired auxiliary switches and 12-volt connections that we’ve already seen in the Ford F-150 Raptor, ready to plug in every device you can carry. Two-door models have a three-section roof while four-door roofs come off in four parts, which should all be completely removable by one person.

The SYNC 4 infotainment system comes on an available 12-inch touchscreen. It's the perfect palette for the 360-degree camera that will help when the road gets rough, and every new Ford Bronco comes with a high-strength steel roll cage with integrated side-curtain airbags. But lest you think you won’t be able to customize, Ford is offering more than 200 accessories to help you personalize your Bronco. The bad news? You’re going to have to wait. Production isn’t scheduled to begin until early next year meaning we won’t see them in dealerships until spring 2021. MSRP for the base two-door Bronco is expected to start at $29,995, including a $1,495 destination fee. At least you’ll have time to decide how you’ll outfit your new Bronco!

Cyndie2therescue I think that the 3021 Bronco is exciting

Cyndie2therescue Sounds like a spectacular come back can’t wait to drive one!!

Guru9YJB5M tbh...I have an LR4 '13, that replaced an LR3. I was waiting on the Defender....but after seeing the body style...not loving it. I'm now considering the Bronco Black Diamond. I'll keep my LR4 b/c it's artic white, with 20" black wheels, black package exterior effect and all the interior bells & whistles. It's not cheap to maintain and chews through brakes at 9K-11K miles(depending on driving style & hwy vs city stop/go driving). But it's still a beauty to look at and when I'm on the highway and need to "open up" it effortlessly trucks along at 90mph w/ ease. It also makes a growly sound which excites me. The interior is luxurious w/ leather seats, mood lighting, heated steering wheel front and rear seats. I love what Ford has done w/ the styling. They updated the predecessor... but you can tell it's related to the original Bronco. Land Rover's Defender re-entry has a body styling that neither resembles the predecessor or evokes the same feeling. Granted Motor Trend awarded the revamped Defender Suv of the Year/2021. I think that's a first for Land Rover.....in maybe ever?

Have you driven a 2021 Ford Bronco?
Rank This Car

Enter your zip to see incentives for a new Bronco in your area.