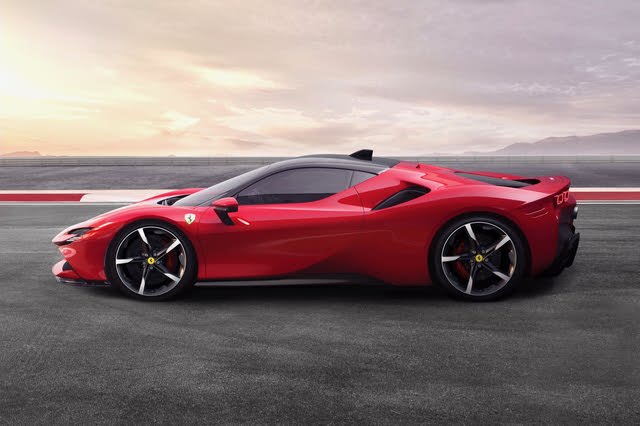 Looking for a Used SF90 in your area?

When Ferrari sets out to make a hybrid vehicle, it doesn’t do so only to save fuel. Ferrari’s hybrids and plug-in hybrids use their electrification to generate extra power, and in the case of the SF90, enable all-wheel drive (AWD).

Ferrari sells the SF90 as a Stradale coupe and as a new Spider convertible, both of which carry a price tag that crests the half-million-dollar mark. The cars are powered by a twin-turbocharged 4.0-liter V8 teamed with three electric motors, which together produce a staggering 986 horsepower and 590 pound-feet of torque. An eight-speed automatic transmission sends power to all four wheels. That powertrain is good enough to propel the SF90 to 60 mph from a standstill in just 2.5 seconds, according to Ferrari. The plug-in hybrid powertrain also offers SF90 drivers the ability to select driving modes that include an electric-only setting, hybrid, and sport or performance.

Despite its other-worldly exterior styling, the SF90’s interior is quite tame. There’s no giant touchscreen or wild shapes. Only a high-tech steering wheel and digital gauge cluster give away the car’s high-tech underpinnings. As with many Ferraris, most controls and functions are centered on the steering wheel, and the gauge cluster handles display duties for both vehicle information and entertainment features.

The SF90 gets six speakers, Bluetooth, traffic information, voice controls, and navigation. Apple CarPlay is available, but not Android Auto. The SF90 also lacks many of the advanced safety features that buyers of more mainstream cars expect, such as blind-spot monitoring. It does get a backup camera and parking sensors, however.

Both the SF90 Stradale coupe and Spider convertible start at over $500,000, with the drop-top version costing around $50,000 more. As is tradition with Ferrari, several customizations and add-ons are available from the factory. In addition to a special Fiorano pack, which brings race-inspired performance and styling touches, Ferrari offers several unique colors for the car, including five shades of red and several blue tones. Even the engine bay can be customized with carbon fiber. Four wheel choices and several brake caliper colors are available, as are various seat types for the interior.

Enter your zip to see incentives for a new SF90 in your area.

Looking for a Used SF90 in your area?