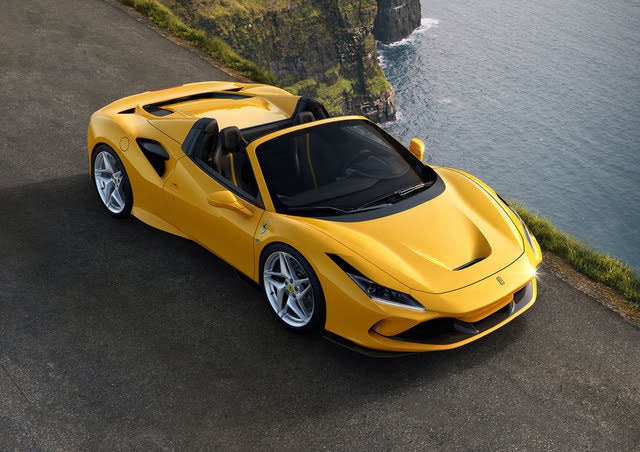 Looking for a Used F8 in your area?

Ferrari’s model line is filled with high-tech, high-powered cars, but they all follow the formula that made the automaker so legendary. High-revving engines, sharp style, and decadent interiors are the name of the game, and the F8 is a great example of that philosophy. Available both in Tributo (coupe) and Spider (convertible) formats, the F8 rolls into 2021 without any major updates, but it’s hard to complain about that when the previous model year’s car was so compelling.

Ferrari sells the F8 in two formats, which we’re considering as trim levels. The F8 Tributo is a two-door hardtop, while the F8 Spider is a convertible. Both can be customized to a buyer’s specific desires (and budget), but are sold as single trim levels on their own.

Unlike the new Roma, the Ferrari F8 is a mid-engine design, which means the powerplant is behind the passenger compartment but ahead of the rear axle. This gives the car sharp handling and better balance at high speeds. The twin-turbocharged 3.9-liter V8 produces 710 horsepower and 568 pound-feet of torque and sends its ferociousness to the rear wheels through a seven-speed dual-clutch transmission.

The car’s bodywork is equally as impressive, incorporating several aerodynamic tricks to help the F8 stick to the road in nearly any situation. Ferrari notes that a front S-duct takes high-pressure airflow from the front bumper and deflects it upward across the hood, which creates suction and downforce over the front axle. An innovative rear spoiler creates massive downforce without an accompanying increase in drag.

The F8’s interior is designed to be as cockpit-like as possible and features a driver-centric gauge cluster that brings much of the car’s information and control systems directly in front of the driver’s line of sight. Similarly, the steering wheel carries controls for suspension functions, driving mode, and more. Both the coupe and convertible models get a 7-inch touchscreen with Apple CarPlay, but Android users won’t get Android Auto.

Guru9YJNK Chris, why is your head so far down in your photo? Maybe center it?

Enter your zip to see incentives for a new F8 in your area.

Looking for a Used F8 in your area?