Looking for a New Dodge Durango in your area?

The 2021 Dodge Durango blends family-friendly accommodations with power and a new infotainment system to deliver a compelling choice for two-row and three-row SUV buyers. 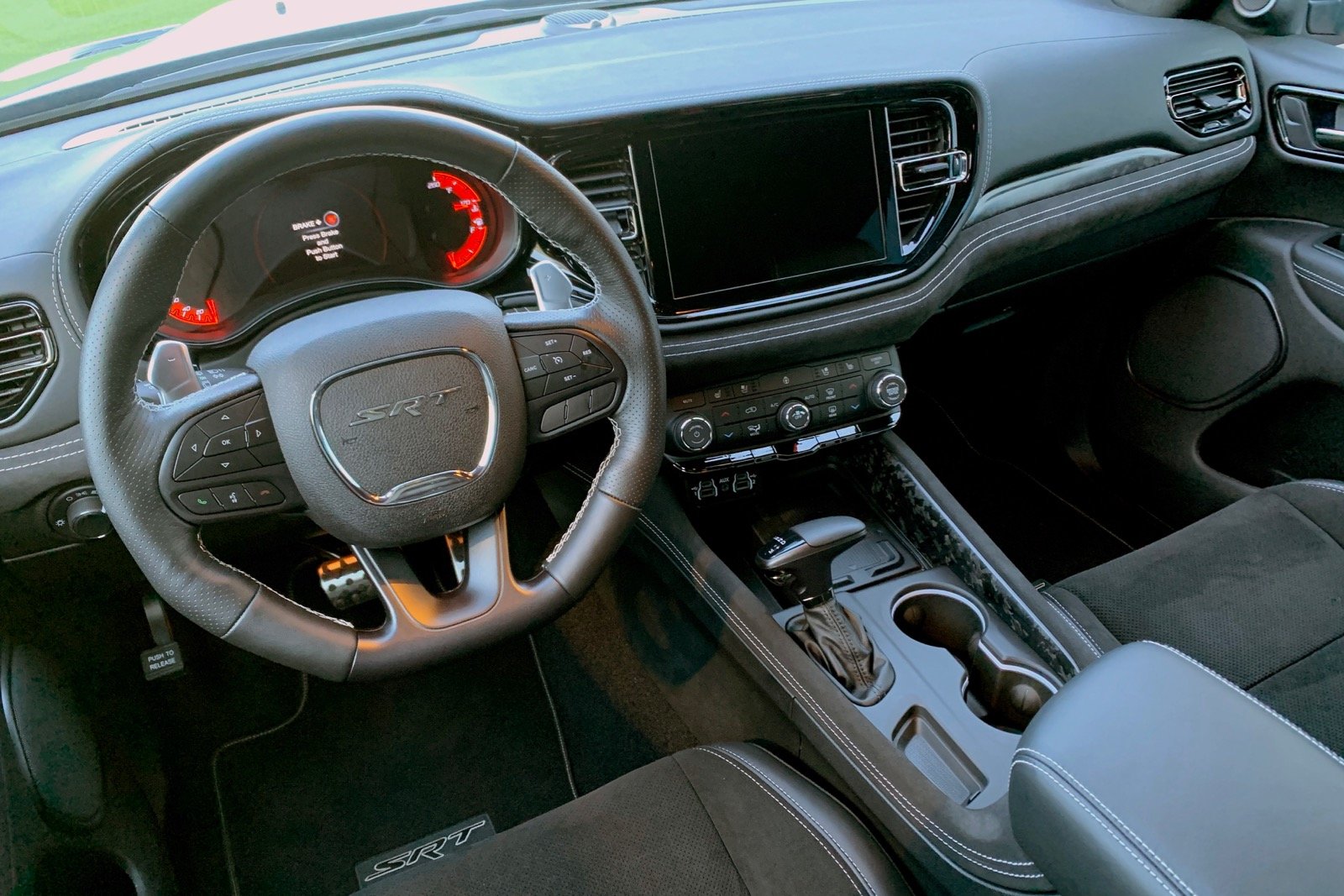 Though the current generation of Durango is aging, Dodge continues to update it to keep it relevant in an increasingly competitive SUV marketplace. For 2021, the story continues with the new SRT Hellcat variant, the most powerful SUV ever, and the available Tow N Go Package.

Dodge hasn’t changed the exterior styling of the Durango much since its current generation debuted in 2011. The third generation of the popular SUV is built alongside the Jeep Grand Cherokee in Detroit, but the two don’t look similar at all.

Dodge makes the Durango fit in with its remaining family members (Charger and Challenger) by keeping its muscular stance and athletic styling, which has been revised for the 2021 model year. Nowhere is this more apparent than on the new 2021 Dodge Durango SRT Hellcat model, which received a cold-air scoop, throaty twin-pipe exhaust, LED headlamps, rear spoiler, and different front end as part of its design process. Our tester was this new model.

Six different 20-inch wheel varieties and one 18-inch version are available on the Durango; which ones are standard and available vary by trim level. The SUV comes in a buyer’s choice of 11 exterior colors and there are six interior color schemes available.

The Durango’s cabin features a new-for-2021 instrument panel and either an 8.4-inch or 10.1-inch touchscreen that runs FCA’s fresh Uconnect 5 infotainment system. Moving up through the trim levels, the Durango becomes increasingly more premium and sophisticated.

Cloth upholstery is standard on lower-level models while leather, suede, Nappa leather, and Laguna leather are options as you move up the grades. A number of contrast stitching options and available Demonic Red-colored seat belts give the SUV a funky flavor.

The updates to the Durango’s dashboard give it a much more modern appearance and bring it into line with the Charger and Challenger muscle cars.

What is clear with the Durango is that there’s a model for nearly everyone. There are a variety of grades that don’t just move buyers to a new trim level, but also offer track-ready equipment, fine appointments, and unique packaging—a sales strategy that is rare in the SUV world. 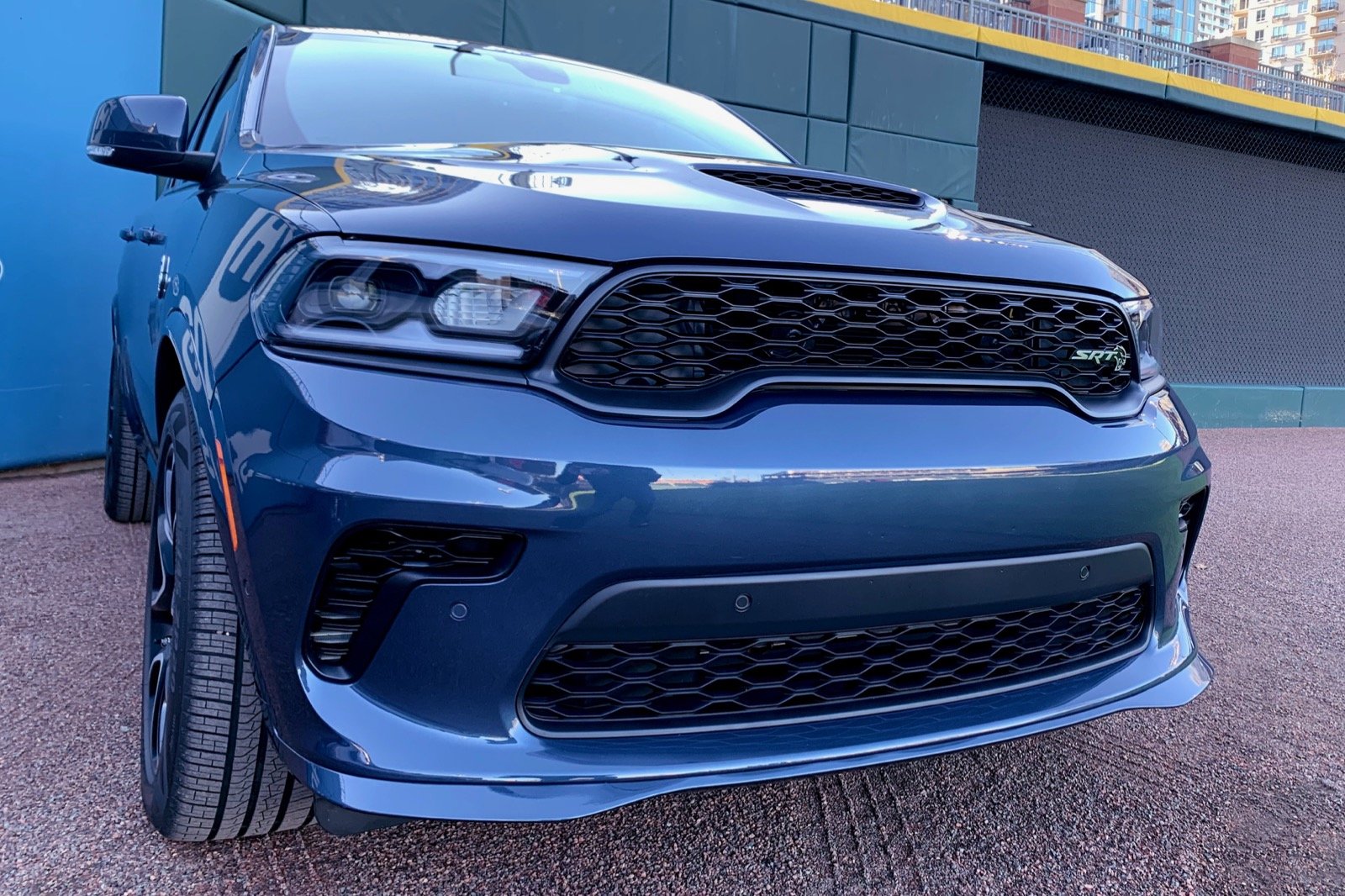 There are four different engines available in the Durango: 3.6-liter V6, 5.7-liter HEMI V8, 392 HEMI V8, and a supercharged 6.2-liter HEMI V8. All engines are paired with eight-speed automatic transmissions though there are three different versions (one for the V6, one for the 5.7-liter and 392 V8 engines, and one for the 6.2-liter V8). Rear-wheel drive (RWD) is standard, with all-wheel drive (AWD) optional (and mandatory on certain models).

The V6 is standard in the Durango SXT, GT, and Citadel, where it makes 293 horsepower (single exhaust) or 295 horsepower (dual exhaust), as well as 260 pound-feet of torque.

The Durango R/T comes standard with the 5.7-liter V8 that makes 360 hp and 390 lb-ft of torque. Buyers can choose the engine as an upgrade for their Durango Citadel.

One big step up from the SRT 392 power plant is the supercharged 6.2-liter HEMI V8 that’s on-board the Durango SRT Hellcat. That engine produces 710 hp and 645 lb-ft of torque. Though it sounds like a lot—and it is—the power is easily controlled. The SUV is as comfortable creeping through city traffic as it is with the pedal to the floor getting up to speed on the highway. Shifts are smooth and so is the acceleration, once you ask the vehicle for it.

Steering is also on-point, allowing the driver to feel connected to the car and inspiring confidence. The Durango's age begins to show through when it comes to the chassis, whether on the road or track. A drive along rural roads showed the suspension to be reactionary, allowing bumps to be passed on to the cabin with seat bouncing a common occurrence—even at moderate speed. On the track, despite the amount of technology installed on the SUV to make it attack corners with ease, the tech was fighting the vehicle’s architecture the entire time.

When it comes to stopping power, the Hellcat has plenty, even when on the track, and after repeated laps, the model’s black Brembo six-piston brakes were up to the task.

The Durango R/T is now available with a Tow N Go Package. Dodge made one of the so-equipped models available for a short test loop. On the back were a typical car trailer and one of Dodge’s kitted out dragsters that didn’t press the quoted towing capacity of 8,700 pounds too closely, but was by no means a small load.

The V8 in the Durango R/T didn’t struggle off the line with the trailer attached though its speed was modulated; getting to 55 mph was a slow grind that didn’t feel strained but also didn’t feel easy. The SUV and load felt stable when traveling thanks in no small part to the "Tow" drive mode’s 50/50 AWD torque distribution.

For track days, the Durango SRT models offer SRT Performance Pages (also standard on the R/T) that provide information on vehicle performance, including gauges for g-force, timers, and engine and dynamometer readouts. Here, the drive modes are more configurable and race options allow the driver to activate, deactivate, and adjust the rpm values for the launch control and shift lights. 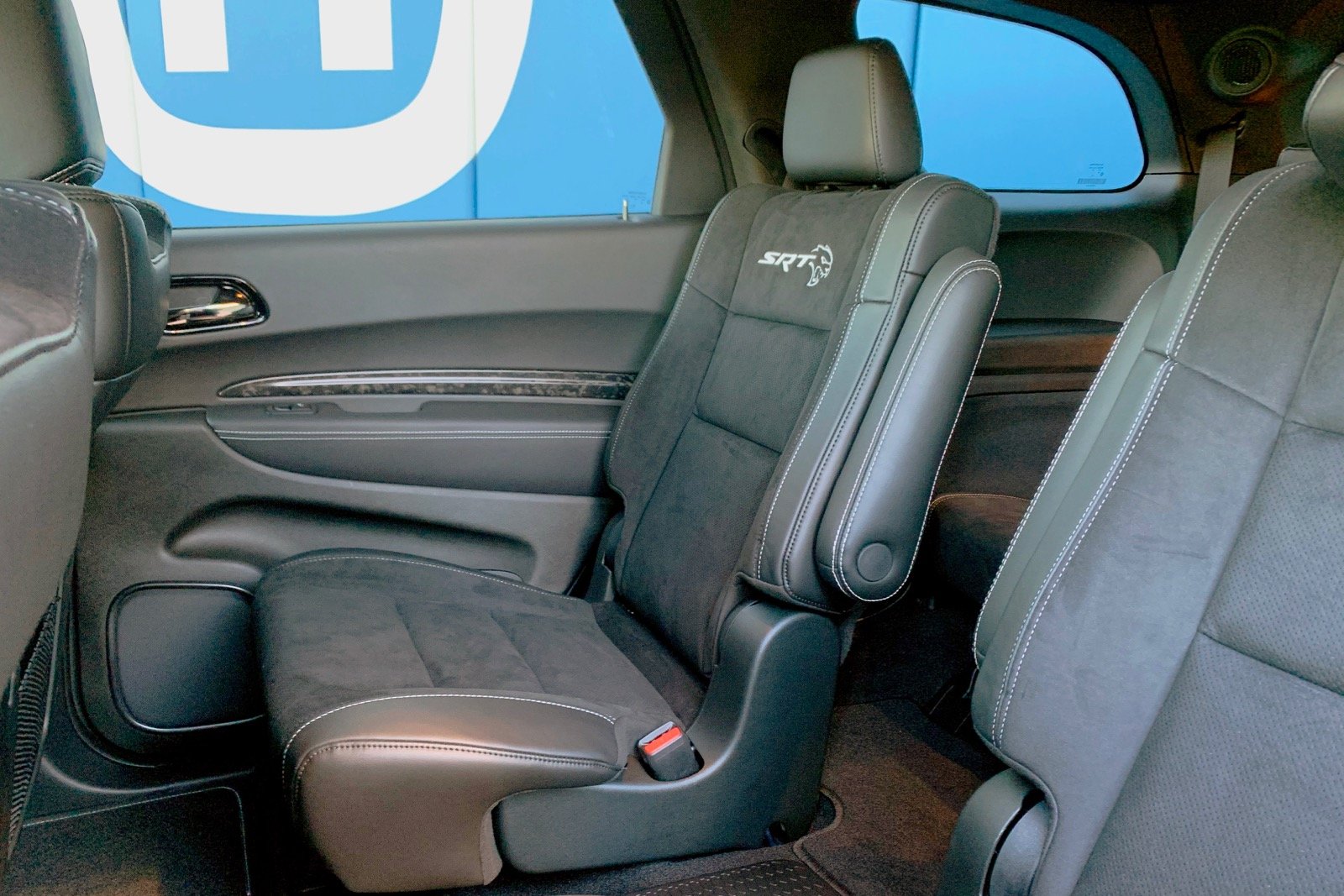 As a family hauler, the Durango wins. It has comfortable seating, a good amount of storage space, family entertainment options, and is easy to drive. The Durango isn’t as elegant as the Toyota Highlander or Honda Pilot, nor is it as bulky as the Nissan Armada or Ford Expedition. The Durango’s success lies in its midsize packaging, which allows it to be a versatile family hauler with an athletic design.

Dodge’s SUV comes standard with seating for five in two rows and can seat up to seven across three rows. Front and second-row seats are spacious, with enough room for taller drivers and passengers. The SUV’s optional third row is more spacious than many other models' third rows with passenger space comparable to the Subaru Ascent, Toyota Highlander, and Honda Pilot. That third row is pretty easy to access as well.

Dodge offers 21 seat options are available for the Durango giving buyers options plenty to choose from.

The Durango has a good amount of cargo space—about average for its class—and nothing is too remarkable about that area of the SUV. It functions completely as advertised.

Dodge recently won awards for its initial vehicle quality. It’s no wonder given how much the Durango’s fit and finish has improved since the early part of the last decade when the current version was new. It stands head and shoulders above what was offered in the Dodge Journey and Grand Caravan minivan. 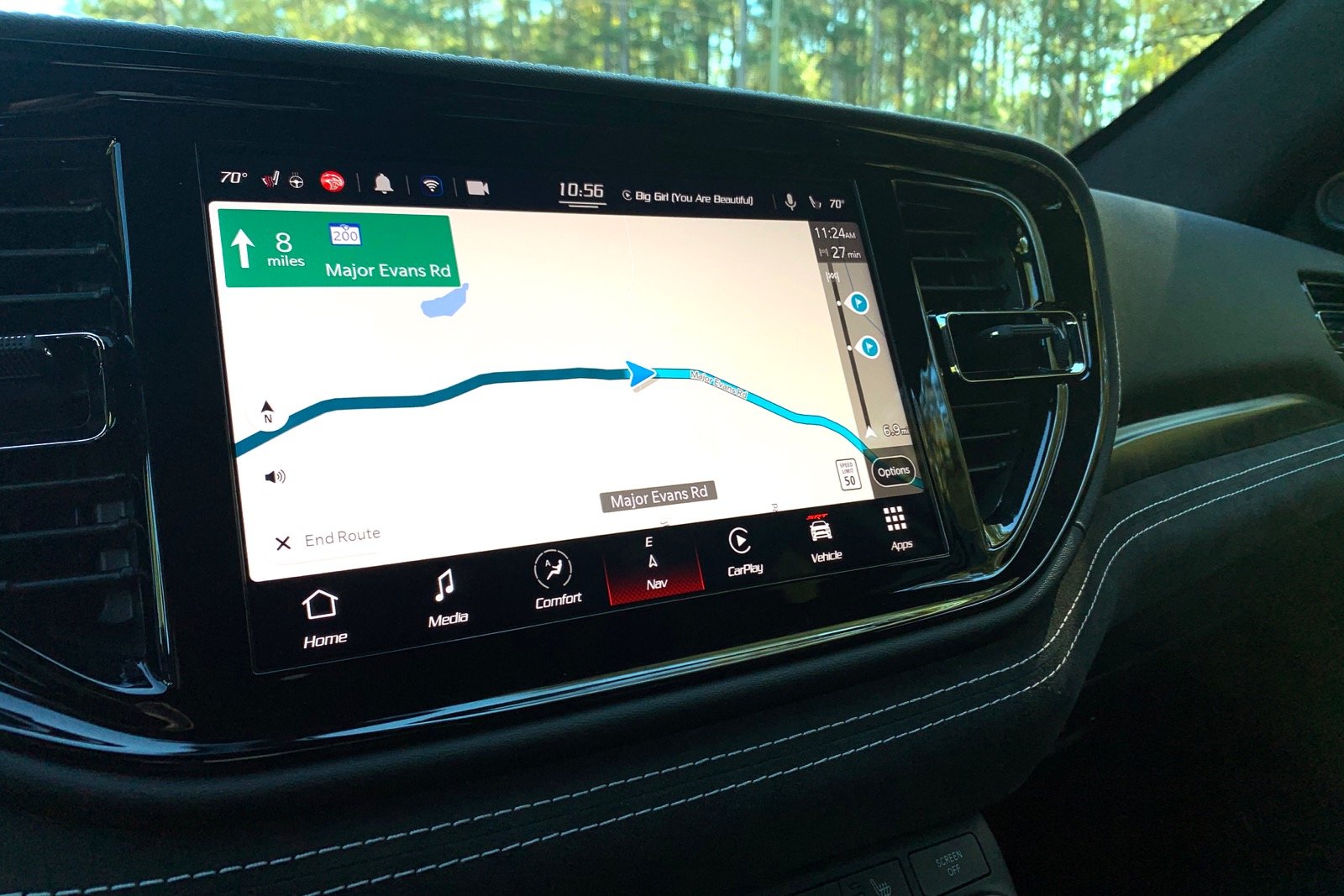 An 8.4-inch touchscreen is standard on the Durango SXT and GT. Higher trim level models get a 10.1-inch touchscreen. Only the larger screen runs the new Uconnect 5 infotainment system.

The system is easy to navigate and comes in a pleasing blue color. The larger screen size is a welcome addition to the Durango and brings it up to par with its competition. Graphics are presented clearly and the screen quickly and accurately responds to touch.

Dodge continues to make a family entertainment system available in the Durango. It includes a Blu-ray and DVD player along with two high-resolution 9-inch screens. The system can be added to Durango GT, R/T, Citadel, SRT 392, and SRT Hellcat models.

The gauge cluster makes it difficult to differentiate the exact speed of travel using the analog speedometer due to its half-circle shape and small size. The situation is not helped by the fact that the speedometer goes upward of double the allowed speed limit on any public road in the U.S.

The TomTom navigation system is a clear-cut winner. Its pleasing-to-the-eye and easy-to-read graphics make navigation easy—even in a crowded city center—without the aid of a head-up display (HUD). The system also quickly responds to changes should you miss a turn without the pesky “recalculating” message and spinning wheel that seems to rotate for an eternity. A HUD would greatly enhance the usability of the Durango’s navigation system and solve many of the issues with the instrument panel, but it’s not available. 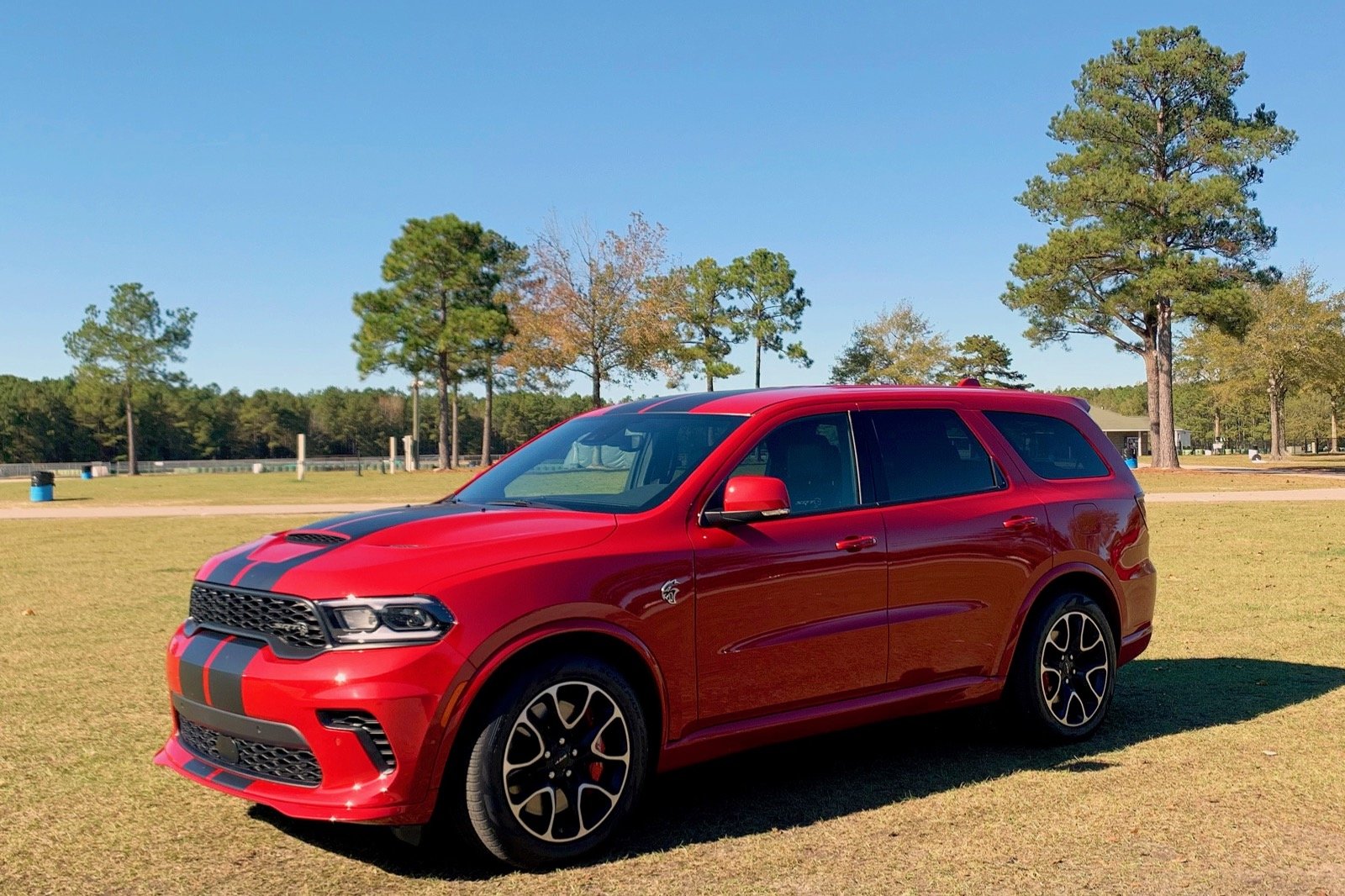 When it comes to safety, the Dodge Durango falls short compared to its rivals. It comes standard with a federally-mandated rearview camera as its only active safety feature. Passive safety features like airbags and electronic stability control (again, mandated by federal regulations) are also standard.

Depending on the trim level or package chosen, buyers can add adaptive cruise control, lane-departure warning, blind-spot monitoring, automatic high beams, rear-cross traffic alert, front and rear parking sensors, and forward-collision warning to the mix. Many of the Durango’s rivals offer these active safety features as standard equipment across most of their lineup.

Crash-test ratings from the Insurance Institute for Highway Safety (IIHS) are not yet available for the 2021 Durango. The National Highway Traffic Safety Administration(NHTSA) gave the Durango a five-star side crash-test rating and a four-star rollover rating. The SUV’s front crash testing ratings (that bit of the SUV is new for 2021) have not yet been released. 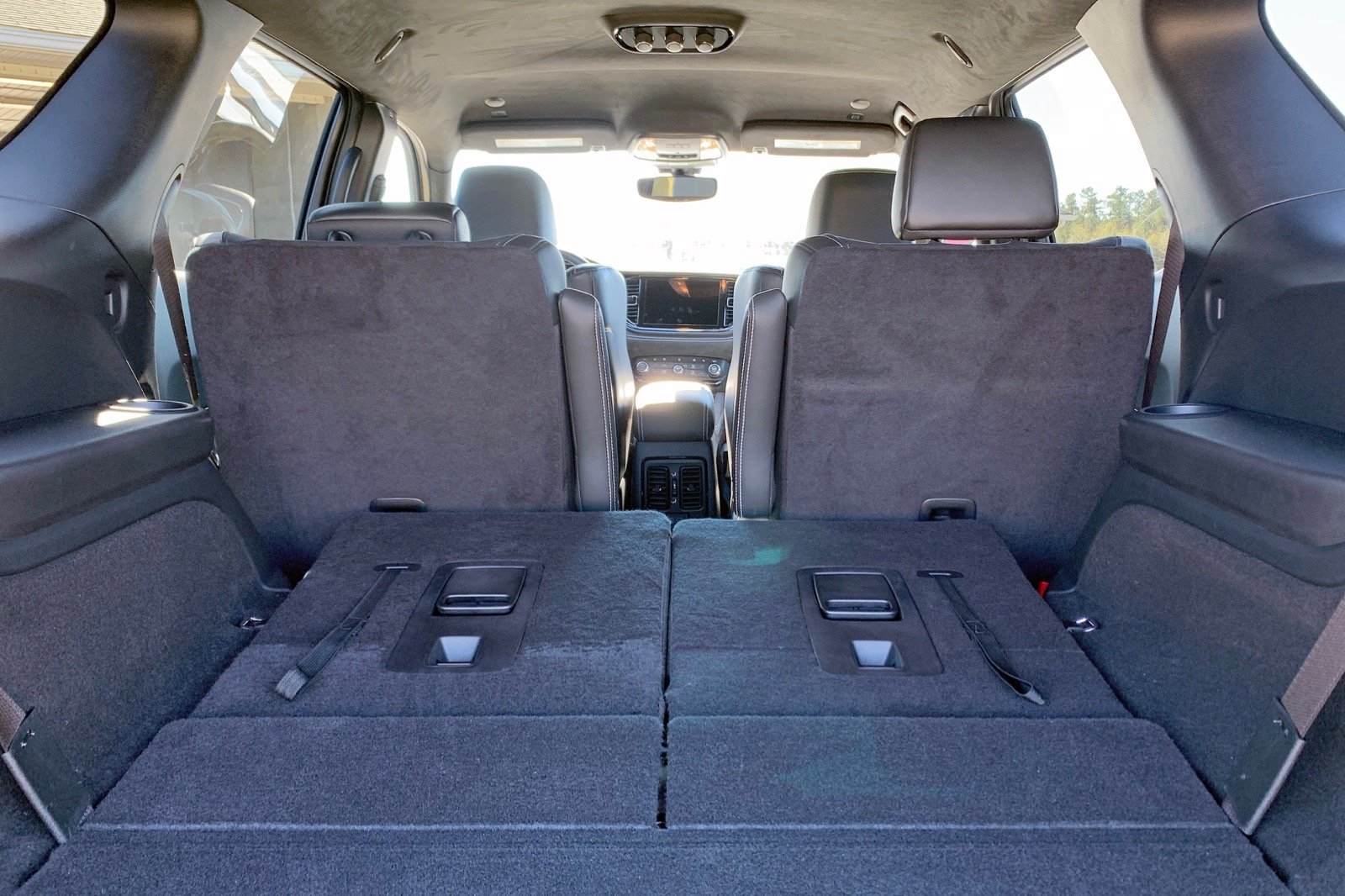 The Durango SRT models are the priciest. The SRT 392 has a $62,995 sticker price while the SRT Hellcat starts at $80,995. It is here that buyers are paying for the sporty equipment under the hood and body of the vehicle in addition to the most premium interior features that Dodge offers. Still, that’s a lot of dough.

However, there aren’t too many rivals to the SRT versions of the Durango, let alone any that are cheaper. To get an engaging SUV with similar prowess you’d have to splurge on a super-luxury SUV like the Lamborghini Urus, opt for the cramped accommodations of the Maserati Levante Trofeo, or be one of the few that shelled out big bucks for the track-ready BMW Alpina XB7. In that way, the Durango SRT models are a bargain.

If you’re looking for a daily driver that isn’t performance-focused, the Durango still makes a great argument to be chosen. However, it faces stiff competition from the Toyota Highlander Hybrid, which is far more fuel-efficient, and the more cost-effective Hyundai Palisade and Kia Telluride, which also come with extended warranties.

Exponent9 That is one ‘roiled-up minivan surrogate.

Guru9LBHPD I think a 50k markup on these is f##k

Have you driven a 2021 Dodge Durango?
Rank This Car

Enter your zip to see incentives for a new Durango in your area.

Hi Friends, Recently i purchased a Dodge Durango SXT 2021, its almost three week only. But my question in this short period if my Car Kilometer speed will cross above 120 KM/per hour, is it harmful ...