For 2021, Chrysler has revised the Pacifica’s looks and technology while keeping the abundant storage space and easy drivability that have made it popular with families. 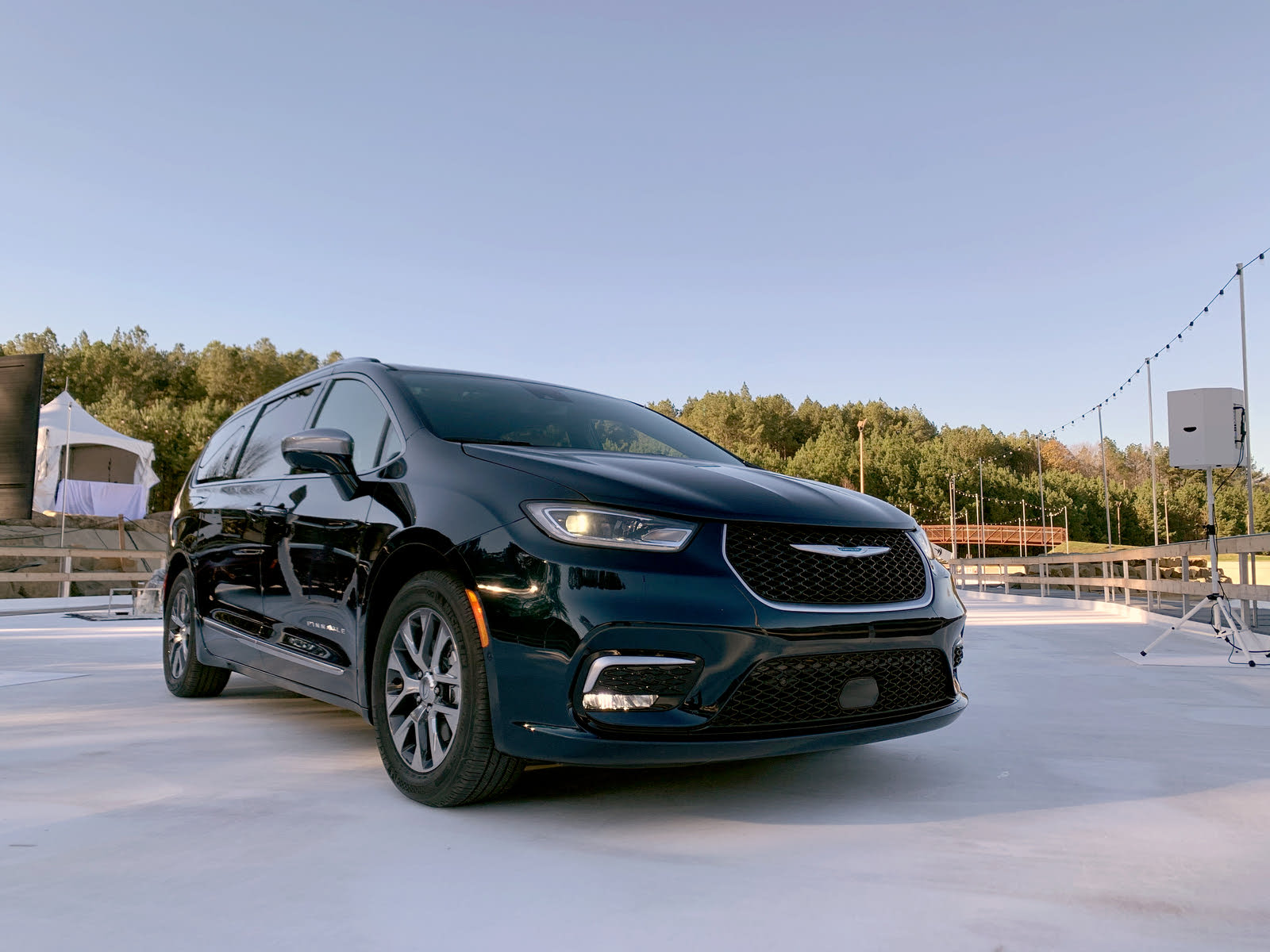 The Chrysler Pacifica minivan has undergone a styling and tech refresh for the 2021 model year. It continues to deliver what families want and need from a daily driver. Chrysler continues to offer the model with either a traditional V6 engine or hybrid powertrain and has upped the ante with a new premium Pinnacle trim level. With 97 standard safety features and gobs of well-designed storage space, it’s easy to see why the Pacifica is the perfect choice for many families. 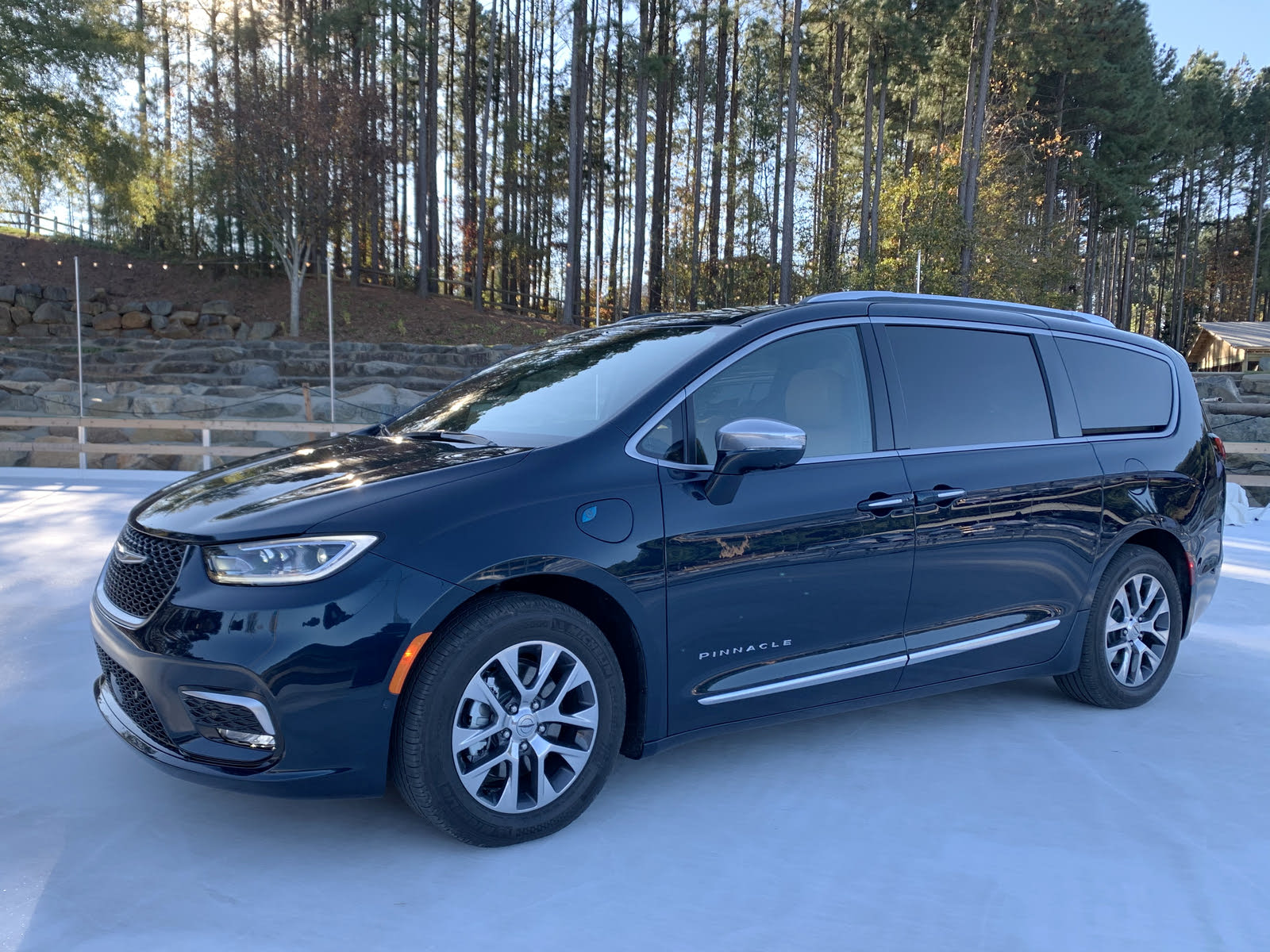 As part of its mid-generation refresh, the 2021 Chrysler Pacifica has had its exterior revised. New standard LED headlights sit on either side of the Pacifica’s new hexagonal grille, making up the new face of the Pacifica’s streamlined front end. The change helps give the Pacifica a more muscular aesthetic, shying away from the elegance of the previous three years.

What remains of the original design’s sophistication is apparent, however, as the eye moves from the front of the van to its sides and rear, and that’s a good thing. At the back is a new all-LED taillamp that runs the width of the model and features the Chrysler wing badge mounted at its center.

Chrysler offers six new wheels designs for 2021 and the S Appearance Package, which debuted on the 2017 model. The package includes darkened features and black accents on the exterior of the van where you'd typically find chrome.

The inside of the Pacifica is very different than that of the newest minivans coming to the U.S., the redesigned 2021 Toyota Sienna and 2022 Kia Sedona. In the Sienna, Toyota has emphasized spaciousness with its dashboard design while filling the cabin with hardy materials that skew toward toughness rather than sophistication. In the Sedona, Kia has opted for a more utility-vehicle-like flat design for the dashboard and center console, which are outfitted in more premium materials.

Chrysler walks the line here. Its lower-cost minivan based on the Pacifica, the Voyager, is rough-and-ready for fleet vehicle and active family use while the Pacifica takes it up a notch delivering what is ultimately a solidly premium vehicle in the top trims.

This comes to a head with the Pacifica Pinnacle, the company’s new highest grade, which was designed with the premium and luxury customer in mind. Not only is the Pacifica Pinnacle’s design just as practical as the other models in the lineup, but it also goes the extra mile with comfort, soft-touch materials, and classy finishes.

Like the Sedona, the Pacifica has a flat dashboard, anchored by a largest-in-class 10.1-inch touchscreen (the same size as the screens in the rear entertainment system, but with higher resolution), but its lower half is tilted toward the console and houses the shifter and climate controls. As tested in the Pinnacle trim, there was an abundance of Piano Black plastic trim with wood accents and real metal surrounds that easily make it the poshest new minivan on sale right now. Quilted leather seats, suede center row pillows, and Beber floor mats complete the upscale look.

Unlike others in its class, the Pacifica doesn’t appear lightweighted for efficiency to the point of cheapness. The doors have a well-weighted feel and close with a commanding thud.

Another tick on the "pro" side of the board is that the Pacifica’s product planners put special attention into the minivan’s sound deadening technology for the new model year. Fresh windows, seals, and insulation keep road, engine, and surrounding car noise far at bay. 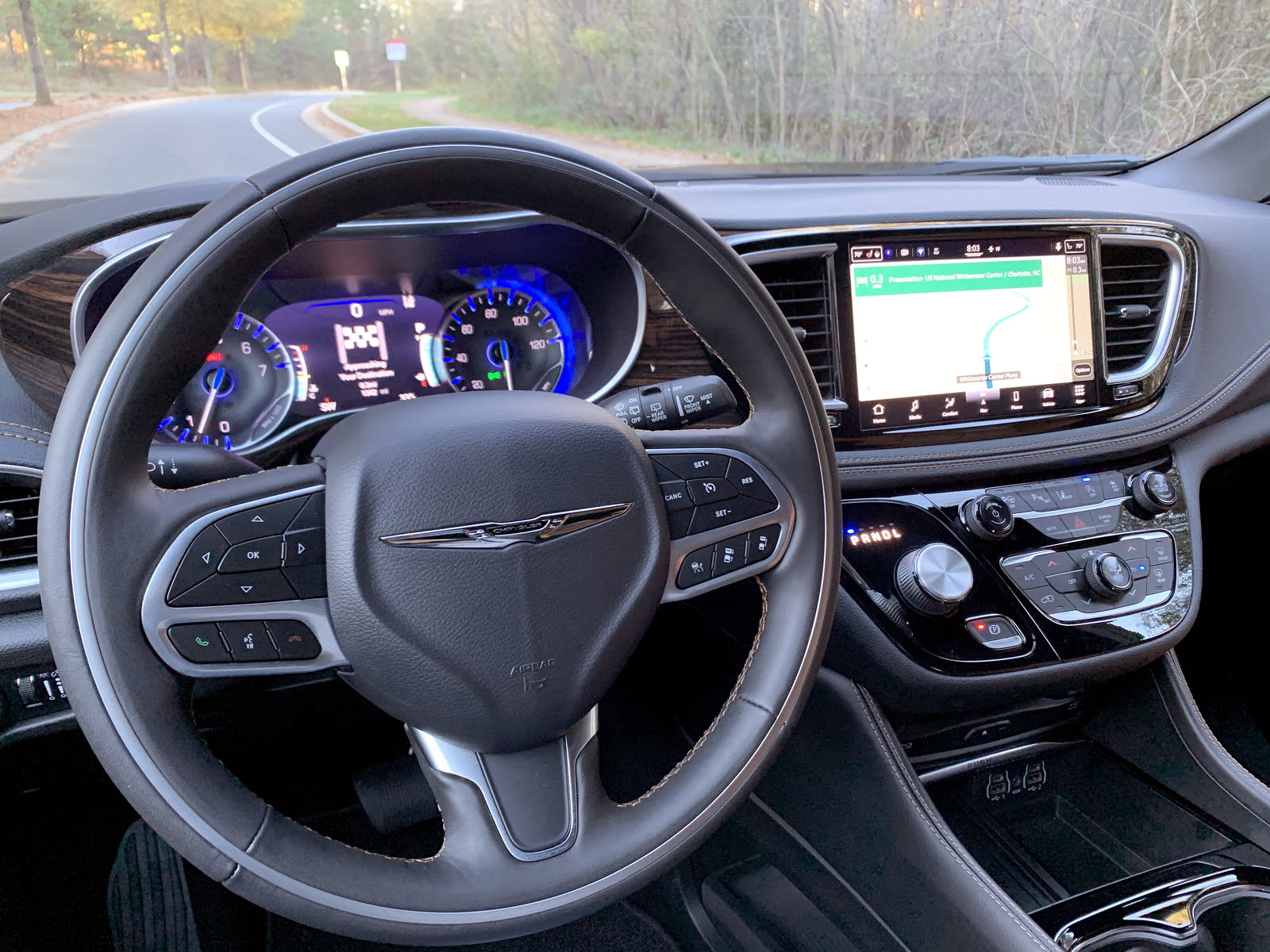 The Pacifica comes powered by either a traditional 3.6-liter V6 engine that is mated to a nine-speed automatic transmission and tuned to get 287 horsepower and 262 pound-feet of torque, or the combination of the V6 hybrid engine paired with a dual-motor electrically variable transmission and 16-kilowatt-hour battery that achieves 260 horsepower from the engine and 198 horsepower from its motors.

AWD is the newest addition to the Pacifica lineup, with the company making it an option for the first time in 16 years. A lot has changed since the last AWD system was available. Now, AWD automatically acts on-demand for buyers who add it to their model. The system activates when it senses a temperature slip, when the electronic stability control is activated, when driving on a rough road, when a grade is steep, if conditions are slippery, when the steering wheel movement sways back and forth, or when there’s a full-throttle request on the powertrain.

If the AWD system senses that you’re driving on a highway, or in conditions that don’t require its use, it will deactivate automatically to improve the vehicle’s fuel efficiency. Activation and deactivation happen naturally and smoothly, without any indication either audibly or via an indicator light that a change has happened. However, you can feel the wheels engage and demonstrate the system’s engineering when the conditions require it. 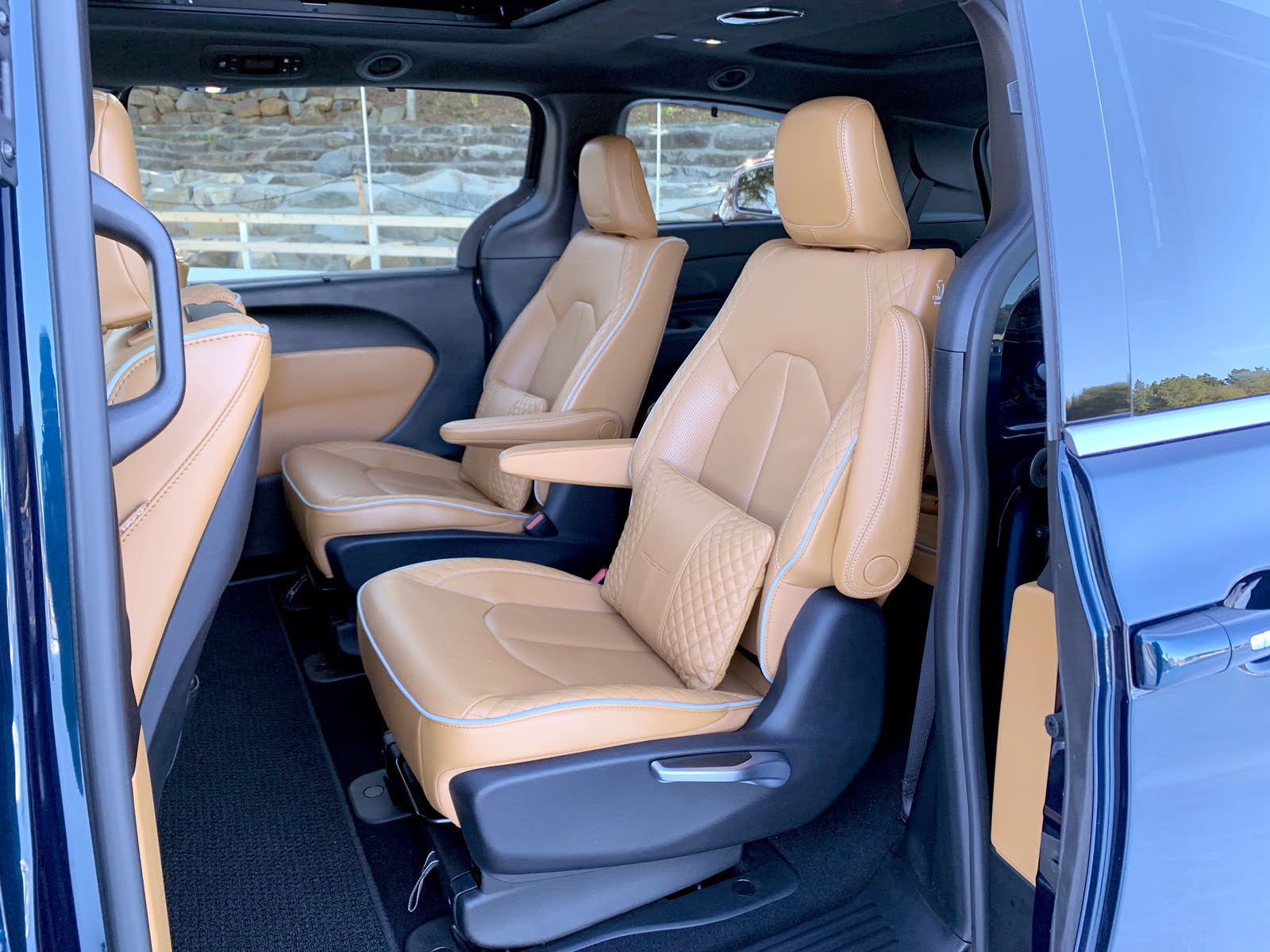 The Pacifica is clearly made with the daily workings of family life in mind. That starts at the powertrain and goes all the way through the cabin to the rear of the minivan.

Seating up front is plenty spacious but also allows for a feeling of togetherness that other vans do not allow due to their large center console (armrests up front were removed as part of the refresh and replaced with a padded center console lid). This doesn’t mean that there isn’t sufficient storage space available between a driver and front passenger. There is, including that handy under-stack area where a bin with a rubberized bottom sits. It’s great for purses, a to-go bag from your favorite eatery, or your muddy running shoes.

Another win for Chrysler is the under-console storage for second-row passengers. This space slides outward from the front into second-row space between the captain’s chairs. It includes a bin that’s great for charging cords, tissues, headphones, and art supplies, as well as cup holders.

The second- and third-row seats have plenty of legroom to transport children and adults, though taller adults will likely be more comfortable in the middle. The Pacifica’s seats don’t have the extensive forward and aft travel quite like the Sienna, but they do have Stow ‘n Go seats that tumble into the floor to allow for float loading. This feature is even available on AWD models.

At the rear, the Pacifica has a spacious cargo area that will make family travel a breeze. Its cargo space rivals its opponents. The Pacifica Pinnacle offers best-in-class total storage of 227.6 liters. 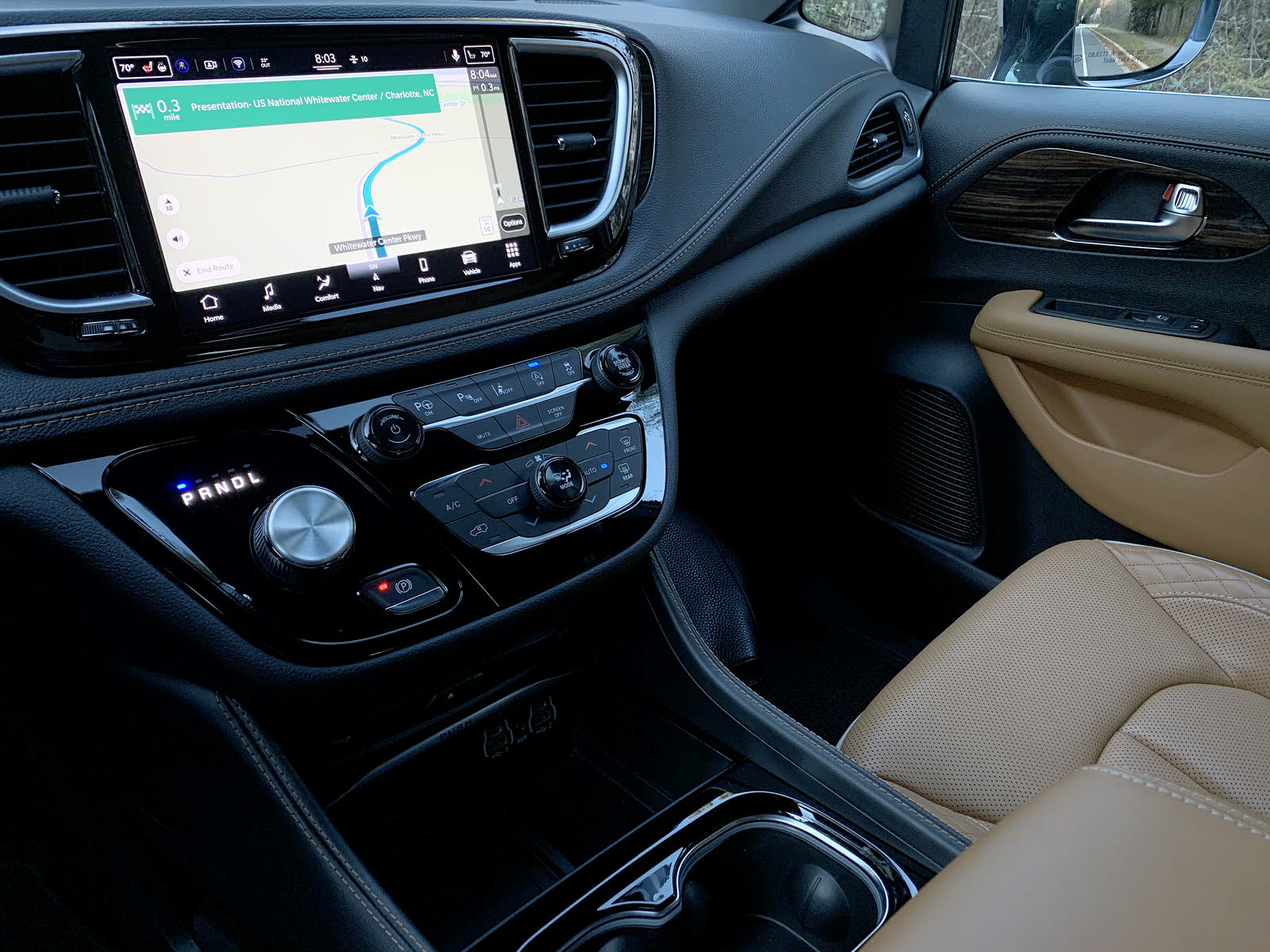 The useful technology on the Pacifica takes the best features of the minivan and elevates them. For example, the traditional push-button sliding doors on the model are offered with hands-free operation in mid-grade and above models.

Uconnect 5 runs the minivan’s infotainment system, offering the most modern and customizable system FCA (Chrysler’s parent company) has devised to date. It's graphically appealing, quickly responsive, and features a clean design. Though the system could stand to have a head-up display paired with it (Chrysler does not offer one in the Pacifica), the navigation is easy to use and read on the fly, and it reroutes rapidly, even in urban settings with tall buildings surrounding the van. Apple CarPlay and Android Auto also come standard.

Chrysler has kept the second row's in-seat entertainment system as an option for 2021 and will add four games to the existing roster of nine, including a childhood favorite: Connect Four. As always, owners can bring their own entertainment on-board and run it through the screens via one of the several types of ports on the side of the consoles.

Chrysler has given its Pinnacle model FamCam, an interior monitoring camera similar to what is in the Honda Odyssey. FamCam takes in-cabin camera tech a step further by offering the segment-exclusive rear-facing child seat view, split-view display, and zoom-to-seat feature, among traditional camera functionality. 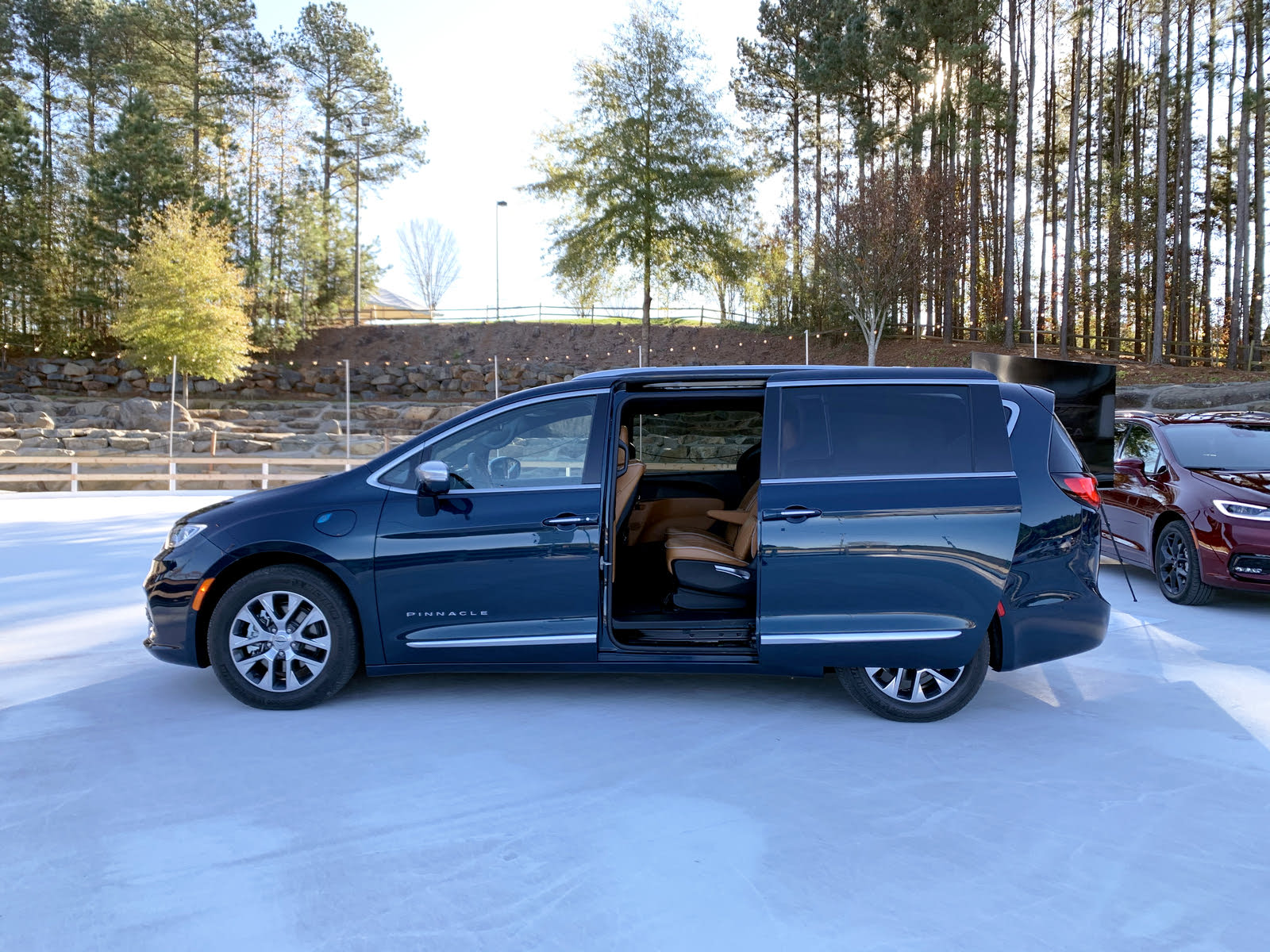 The Chrysler Pacifica comes standard with 97 safety features, but you won’t see most of them. Many are electronic and mechanical, and, with any luck, you’ll never actually know they’re working to keep you safe on the road. Move to the Pinnacle trim level and the number swells to 100.

The 2021 Pacifica has received a five-star overall rating from the National Highway Traffic Safety Administration (NHTSA). At the time of publication, the Insurance Institute for Highway Safety (IIHS) had not yet rated the model. 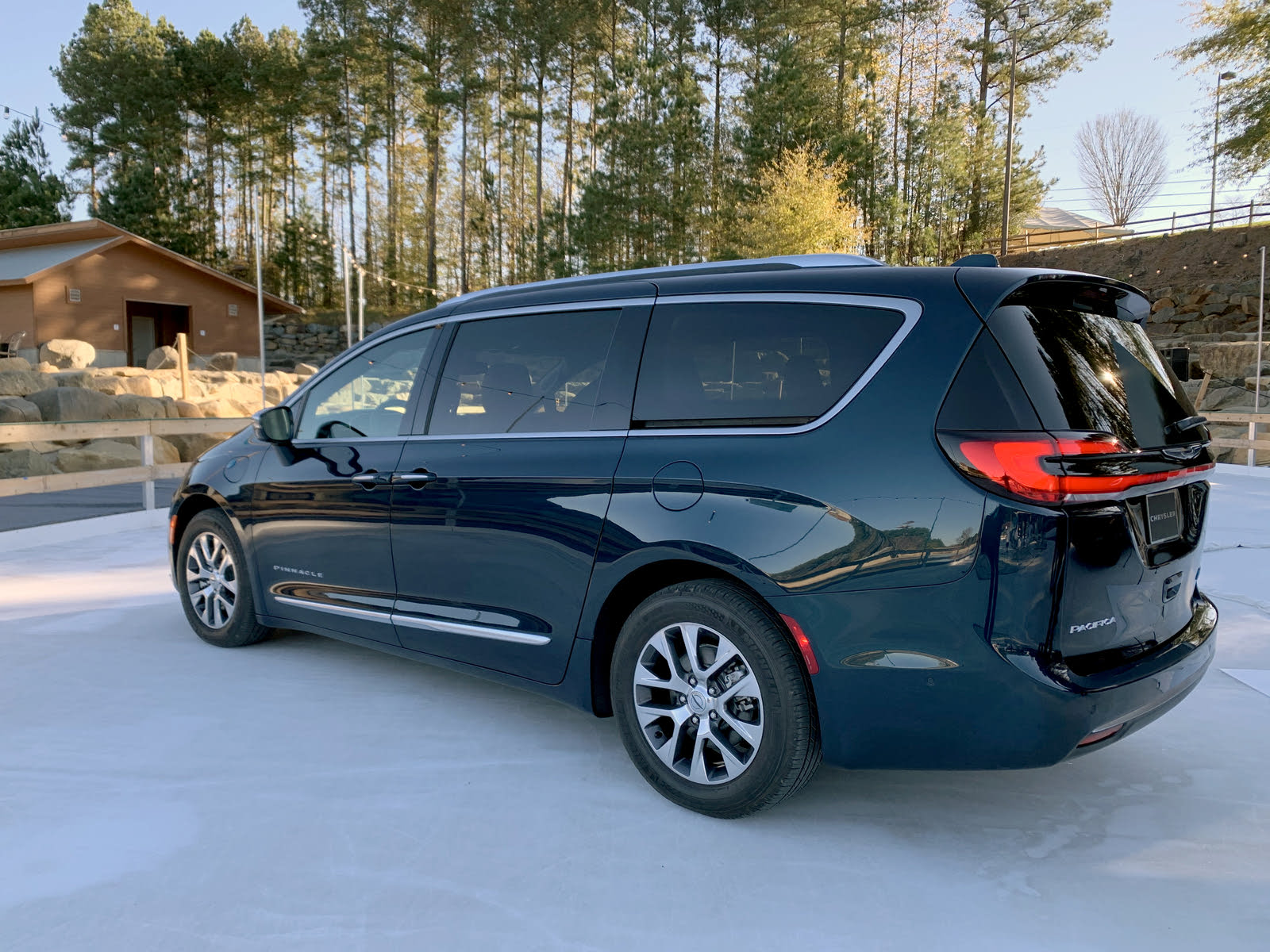 The 2021 Chrysler Pacifica is sold in four trim levels: Touring, Touring L, Limited, and Pinnacle. The base model Pacifica Touring starts at $35,045. Add in AWD and the price jumps to $38,040. A hybrid powertrain drives the base model price up to $39,995.

When considering the pricing of the Pacifica versus others in the market, it’s important to remember that the base model Pacifica is very close to a mid-grade version of other minivans, as the Voyager fulfills the true base model duties of Chrysler’s minivan lineup.

The 2021 Sienna, which is available only as a hybrid model, is priced similarly considering the mid-grade-as-base pricing strategy of the Pacifica. The Chrysler tops out a bit higher, but Toyota doesn’t sell the Sienna in a trim level comparable to the Pinnacle in terms of appointments.

Honda’s Odyssey is not available with a hybrid powertrain and is priced lower than the Pacifica, but it too does not have a comparable top-tier model.

The Chrysler Pacifica occupies a sweet spot in the minivan lineup. It delivers mid-grade and higher near-luxury appointments in a form that’s family-friendly without overloading its MSRP.

What's your take on the 2021 Chrysler Pacifica?

Have you driven a 2021 Chrysler Pacifica?
Rank This Car

Pacifica Liftgate, Can We Adjust How High It Opens?

We just bought a new 2021 Pacifica. As far as the liftgate, is there any way you can adjust how high the liftgate goes up, as is hitting the top of our garage door?