Looking for a New Buick Envision in your area?

Buick redesigned its Envision compact SUV for the 2021 model year, mostly adding to its appeal. 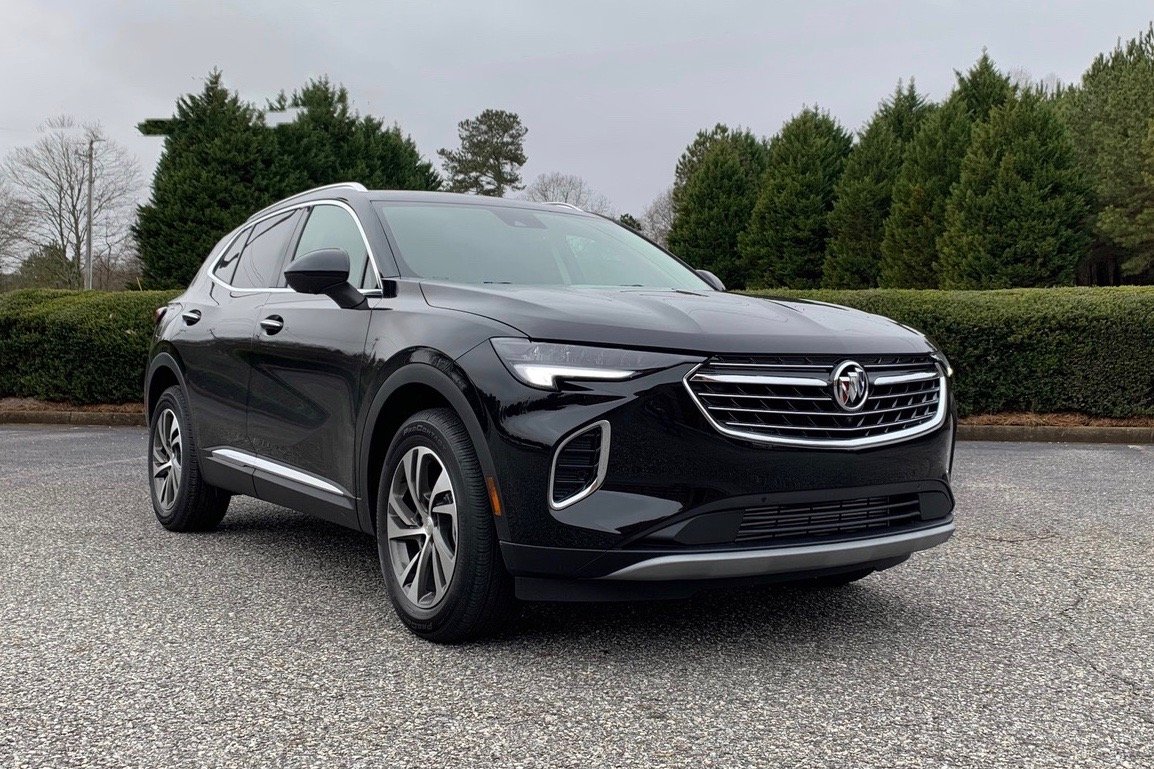 The redesigned 2021 Buick Envision is the start of a new generation, but it doesn’t look or drive like it’s a complete re-do. The Envision, especially its new Avenir top trim, offers plenty to like that makes it more competitive with the rest of the premium compact SUV set. 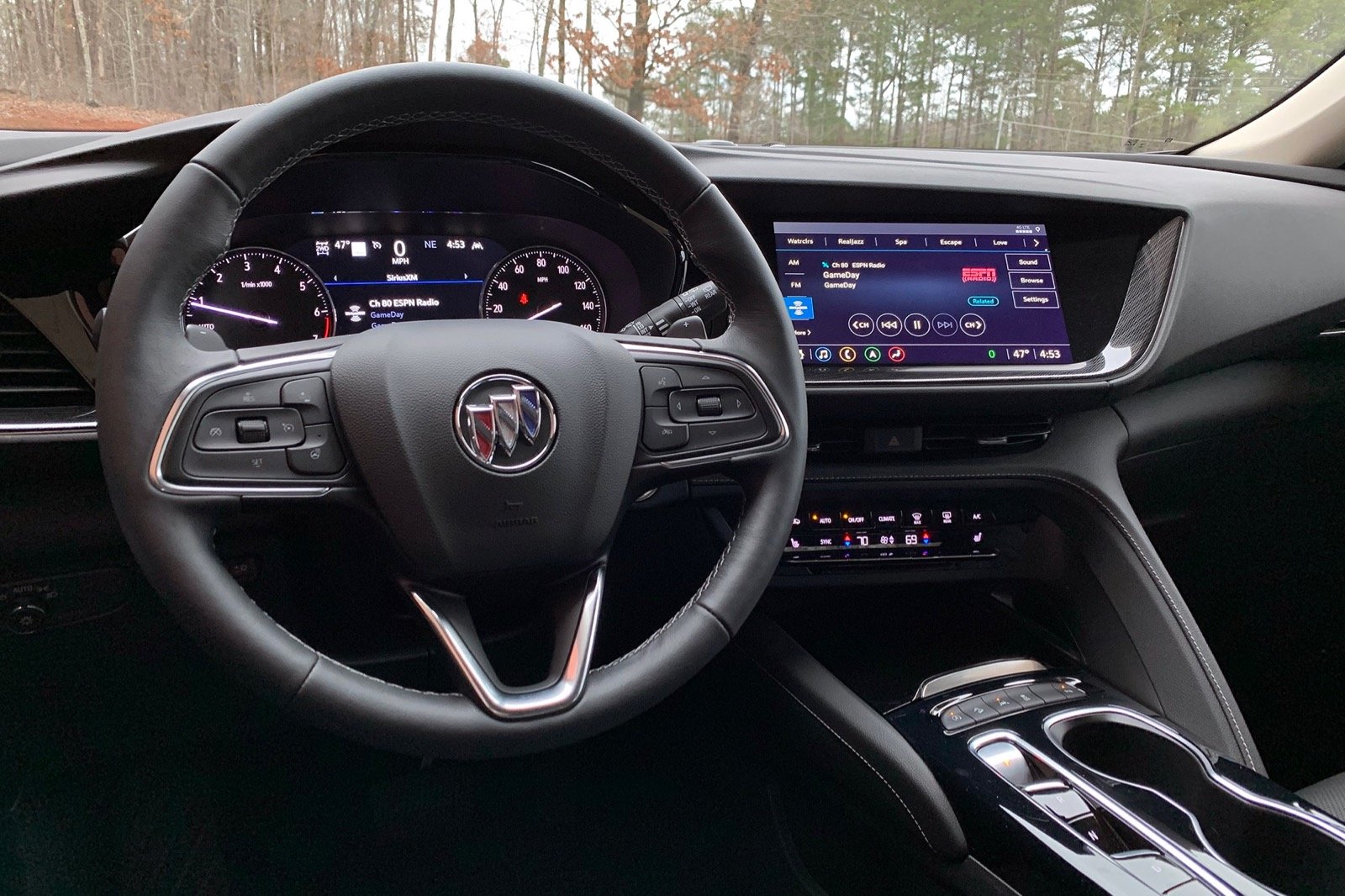 The Buick Envision has undergone a redesign for the 2021 model year following two consecutive years of facelifts, one for 2019 and another for 2020. The two-row compact crossover, which is sold only in China and North America, slots above the smaller Encore GX and below the larger Enclave in the company’s lineup.

The 2021 Envision is lower and wider than its predecessor, with solid premium crossover styling giving it a more planted appearance on the street. With its new looks, the Envision shows off a more sculpted look than its cousin and close rival, the Cadillac XT4, but isn’t as sleek as the Acura RDX, another rival.

Its three trim levels—Preferred, Essence, and Avenir—offer distinct looks for the Envision. This year is the first time that the company’s most premium Avenir trim comes to the Envision.

Buyers can add a Sport Touring package to the Preferred and Essence trims that gives them darkened wheels and exterior accents.

We tested the Envision in its Avenir grade, which definitely fits right into the conversation with its most premium competitors and some base model luxury-level SUVs.

All Envisions come with LED headlights, taillights, and daytime running lights, as well as a welcome lighting animation where the Buick logo is projected onto the area surrounding the vehicle in various locations as the key fob holder approaches.

The Envision rides on 18- or 20-inch wheels depending on trim level. All wheel options come wrapped in standard all-season tires.

Enter the cabin and the first thing your eye is drawn to is the protruding center stack, which houses the infotainment screen and climate controls—all angled severely toward the driver. The driver-centric nature of this design keeps the front of the cabin tighter looking and feeling than it seems like it should due to an abundance of dashboard space.

Elsewhere, the design choices are less puzzling and quite stylish for a General Motors product. Though there are plenty of bits and bobs that appear from the GM catalog, the Buick sits at the intersection of new and familiar quite comfortably.

Buyer beware, however, an abundance of piano black plastic on the dashboard and center console means that dust eagerly gathers on controls and fascia. 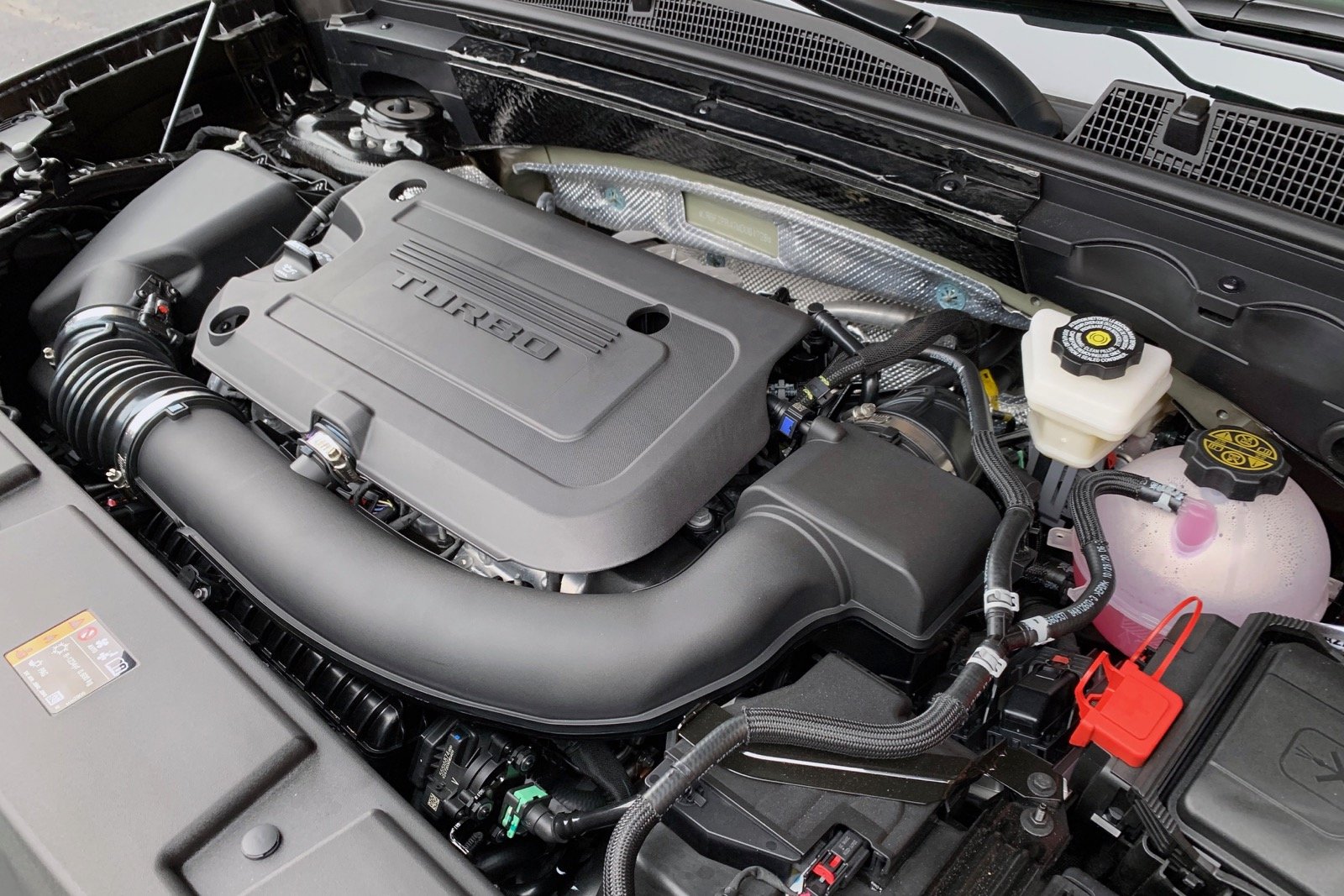 As part of its redesign, Buick dumped the 2020 Envision’s weak 2.5-liter four-cylinder base engine, instead making a turbocharged 2.0-liter four-cylinder engine for the 2021 model year. It continues to be paired with a nine-speed automatic transmission.

To Buick’s credit, they dropped 200 to 300 pounds from the car (depending on trim level) as part of the redesign, but that weight savings is not enough to make up for the power losses from the downgraded engine. Still, the turbo-four is competent enough for daily drivability.

Buick has altered its drivetrain offerings for the new model year, making front-wheel drive (FWD) standard on every trim with all-wheel drive (AWD) available. Before, AWD was standard on the higher trim level models.

Acceleration and deceleration are a noisy affair in the SUV thanks to engine and road noise permeating the cabin, which makes it seem less premium than it looks. The car’s drivability is more akin to a Lincoln than a Mazda, providing comfortable cruising without the sportier/harder suspension and driving dynamics that make the car particularly engaging.

The Envision is offered with a typical GM drive mode selector. Moving the car into Sport mode noticeably changes the revs but continues the noise coming from the turbo. The impact of the switch is not enough to outweigh the nuisance of the noise nor the loss of fuel economy. 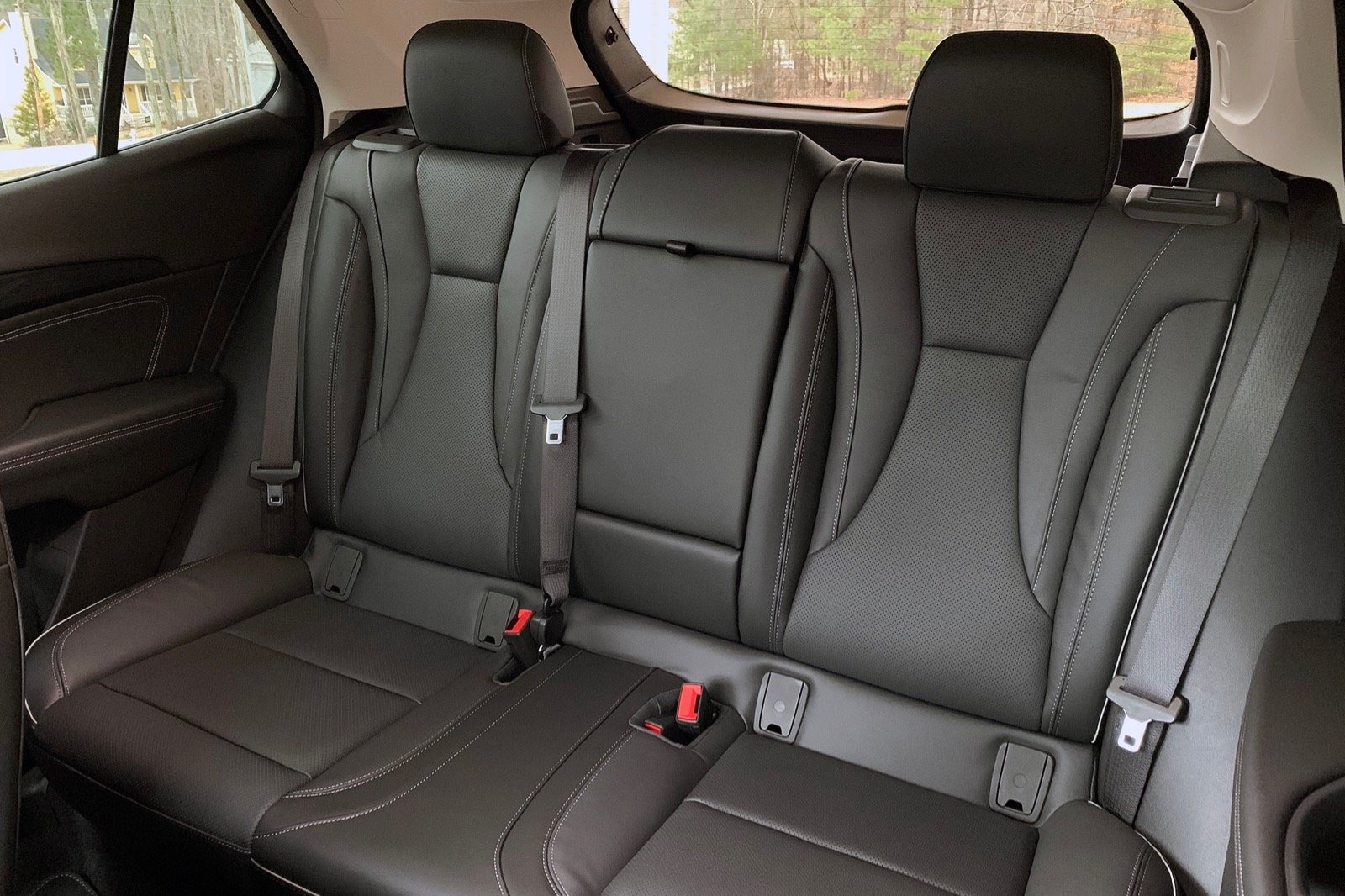 As much as Buick has improved the aesthetics of the Envision, the changes don’t play out to make the cabin better or more functional than before.

Despite having a longer wheelbase than its predecessor, the 2021 Envision has less headroom, legroom, and shoulder room in the front row. Rear-seat passengers lose two inches of legroom in the revised model and come up shorter on headroom as well. They also have nearly six inches less hip room across the seat. Still, Buick calculates that the 2020 and 2021 Envision have nearly identical passenger volumes.

The loss of those inches makes the Envision not as adult-friendly as it once was though two average-sized adults can still comfortably sit in the back.

The Envision has lost two inches of height and width for 2021, which also translates into a loss of cargo capacity. There is 25.2 cubic feet of cargo space behind the rear seat and 53.7 cubic feet of room with the 60/40 split-folding back seat in its down position. Those numbers are low compared to what is in other luxury SUVs.

However, the Envision’s rear cargo space is plenty for daily-driver activities. It has handy grocery bag holders built into the sides of the cargo area, but they cause bags to hang rather than sit on the floor. Carve-outs surrounding the wheel wells add space but that may only be useful when the rest of the cargo area is nearly full. Buyers will want to opt for a cargo net to keep groceries from sliding around back there.

The driver-centric cockpit nearly completely blocks out the front seat passenger from using the climate controls and infotainment screen. In this way, it’s similar to the setup of the 2020 Chevrolet Corvette, though less excusable because the Envision is for families and not a driver-centric sports car.

Small-item storage remains relatively good and its setup is pretty typical for the compact SUV segment—premium or otherwise.

Forward visibility isn’t great in the Envision. Shorter drivers have a hard time seeing beyond the cowling between the hood and the windscreen and the slope of the hood means that an owner will really need to get to know the dimensions of the front end of their vehicle and rely on parking sensors to properly stop in a spot. 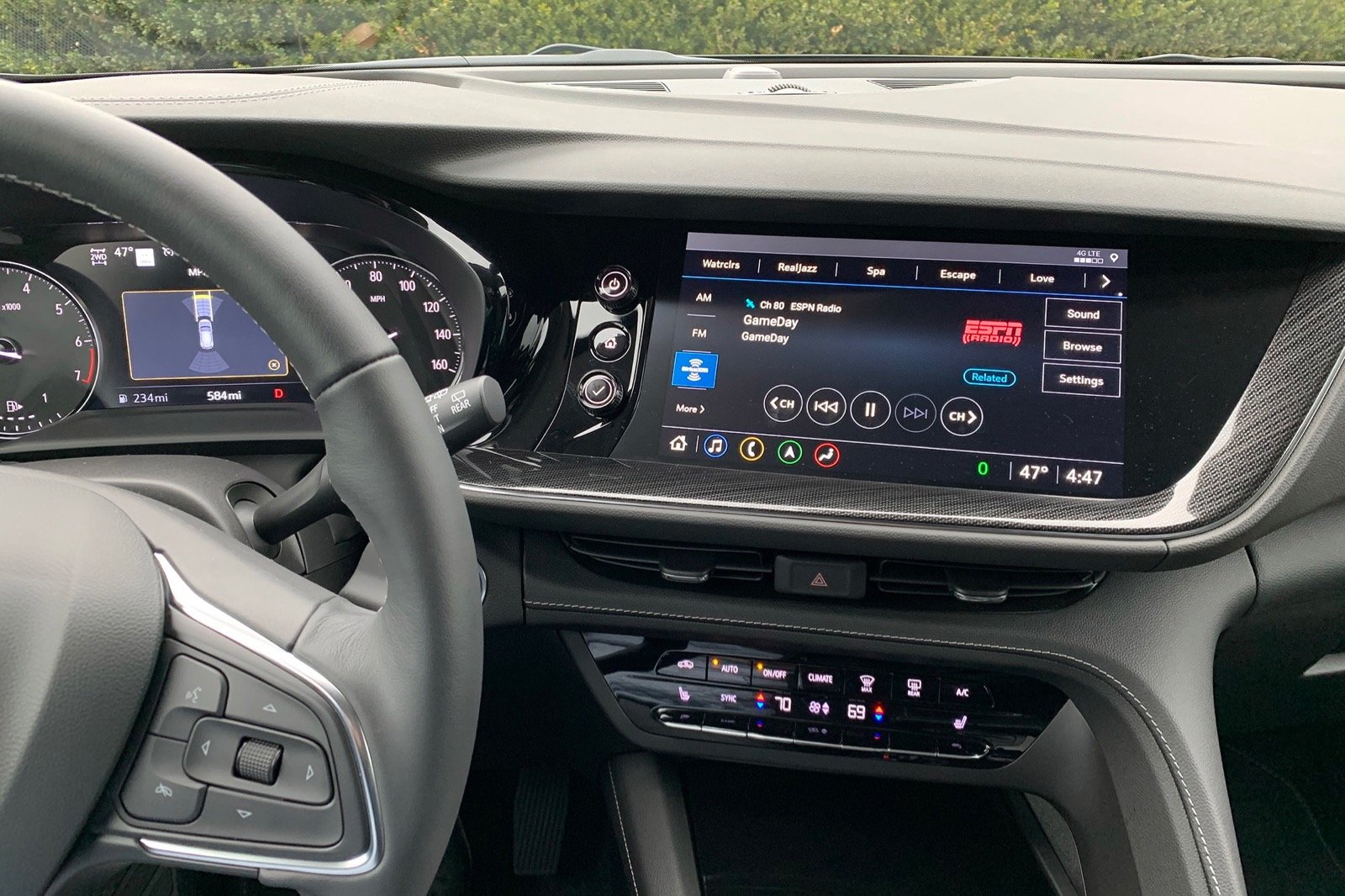 There is nothing particularly revolutionary or advanced about the tech in the Envision. Its biggest highlight is the standard 10.2-inch infotainment touchscreen, which cleanly displays the infotainment system's necessary functionalities and is responsive to touch.

Scrolling through channels is best left to the driver who can see the station and song title information faster on the available 8.0-inch driver information display than it appears on the infotainment screen—a 4.2-inch driver information screen is standard. Don’t bother asking the passenger to change the channel. They’ll have to maneuver in their seat to reach around far enough to get to the dial then lean over to see the screen, away from the optimally safe seating position. 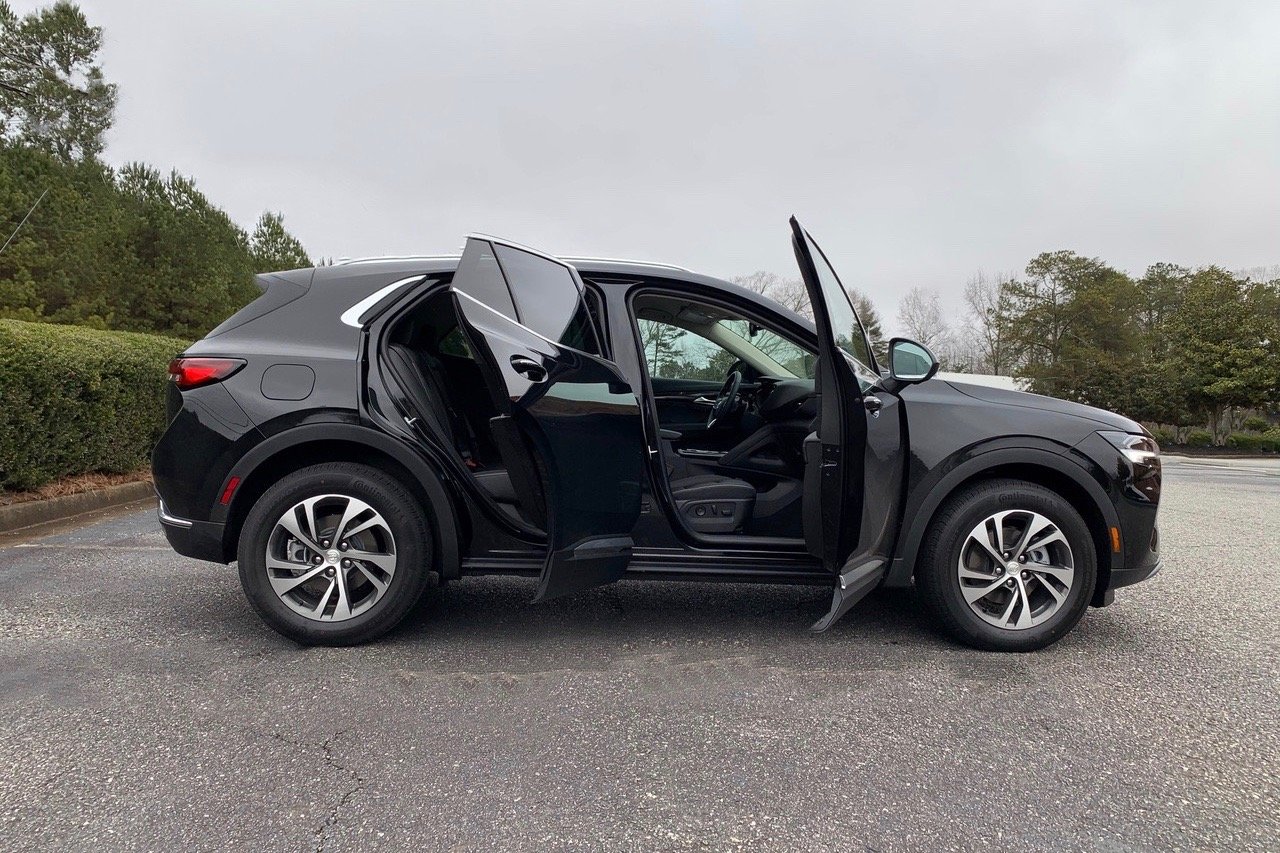 The National Highway Traffic Safety Administration (NHTSA) and Insurance Institute for Highway Safety (IIHS) have not yet rated the 2021 Envision. Because this is the start of a new generation of the SUV, and its body structure has significantly changed, the previous model year’s results are not applicable to the new model.

The Envision’s Buckle to Drive feature is another way that General Motors is reminding people to use their seatbelt. It ensures that a driver is latched in before the vehicle can be shifted from park to drive. Though it might seem annoying if you’re just hopping in the car to maneuver it in the driveway or garage, it's far less grating on the nerves when you are setting off on a typical drive situation.

The Buick Envision doesn’t have GM’s Super Cruise hands-free advanced driver assist system nor does it have the lane-centering technology that has become commonplace in many premium and luxury SUVs. 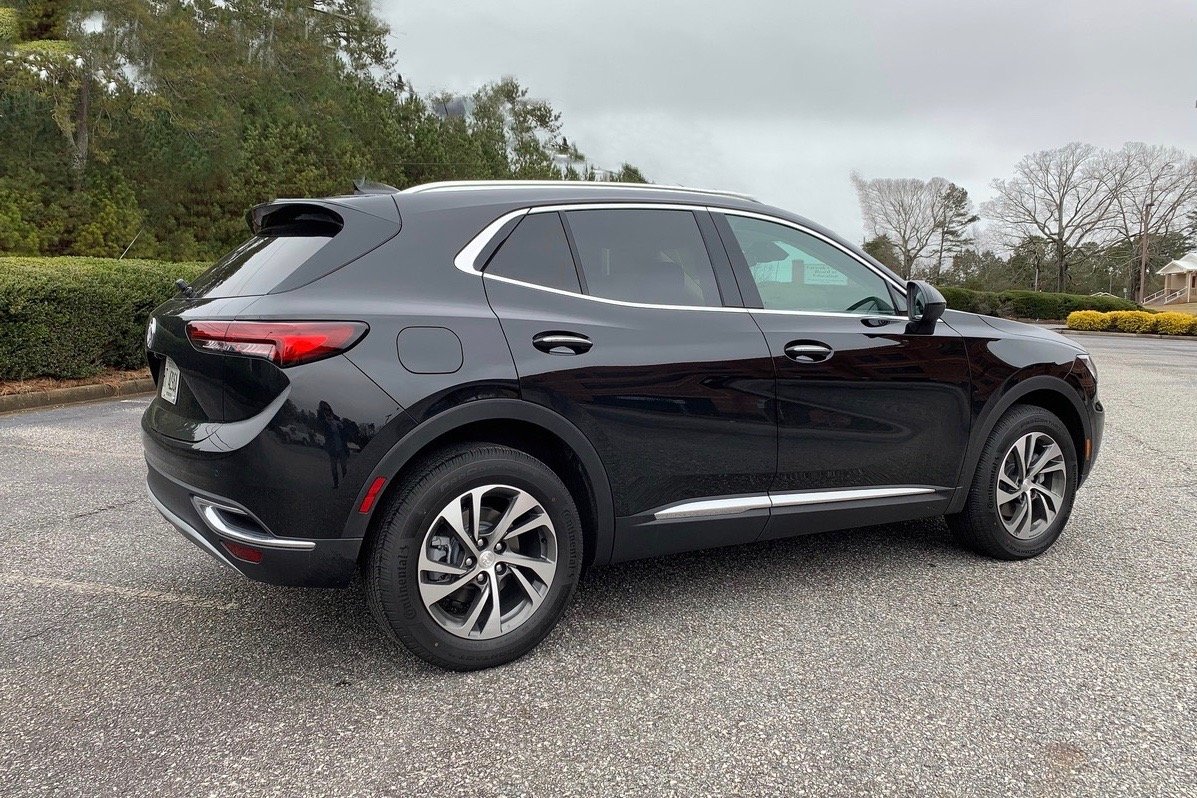 The 2021 Buick Envision starts at $32,995 for the Preferred base model, which is about where you’d expect a premium SUV of its size to be priced in the base trim level. Adding AWD to the model is a $1,800 upgrade on every trim level.

Buick has given the mid-grade Envision Essence a $36,995 starting MSRP while the top-tier Envision Avenir has a starting price of $41,395.

Low-end pricing for the Envision overlaps the high-end Buick Encore GX. If you’re looking for a well-equipped vehicle and don’t need quite as much passenger and cargo space, the Encore GX makes for a fine cross-shop.

The Cadillac XT5 offers more passenger and cargo space (it’s technically a midsize SUV) and has more powerful engine options. If you’re shopping for more oomph from the accelerator and don’t mind a higher price tag (the XT5 starts at $43,995), the XT5 is worth a test drive.

Drivers wanting a more connected drive and a higher level of luxury will want to take an Acura RDX for a test drive. Its drive dynamics are far sportier than the Envision and it has a more sophisticated interior.

The Lincoln Nautilus, Lexus NX, and Infiniti QX50 are more natural competition for the Envision, despite the Nautilus being larger. They’re priced similarly but the Nautilus has more engine choices and a posher interior. The QX50 doesn’t have the infotainment refinement of the Envision but does have ProPilot Assist driver assistance technology, which is a significant upgrade on what the Envision offers. The Lexus NX brings with it a long history of reliability and comparable price point.

The Honda Passport also offers a good amount of features and a more powerful engine while carrying a price tag that’s similar to the Envision.

If you would prefer an electrified option, there are plenty of those as well. The all-electric Tesla Model Y is a slightly smaller crossover that costs about as much as the Envison Avenir. If you don’t want to go all-in on electric, but want to reap the benefits of a hybrid, consider the Toyota RAV4 Prime, a plug-in hybrid, or the Toyota Venza, a new hybrid from the company. The Lincoln Corsair will be available in a plug-in hybrid model in the coming year but will be priced far higher than the Envision.

What's your take on the 2021 Buick Envision?

Curt1923 Its about time Buick made a vehicle that is as stylish as this one. Seems as if theyre playing "catch up" with the other big names as Lexus/Toyota, Bmw, Mercedes, Acura/Honda,Nissan/Infiniti,etc. The only thing now, is to figure out if it is as long lasting as these others,(durability), and hold its value!!TBD!!

Merry Sad to see that they are not coming out with a white tricoat/pearl color. Summit white just doesn't do it for me. The color choices for the new design are lacking, to say the least. Guess I will be looking at something else. Really was hoping to purchase this car.

Merry So disappointed to see that they are not coming out with a white tricoat/pearl color. Summit white is just lacking. I will be looking at something else. I had been waiting to purchase this car. So disappointing.

Have you driven a 2021 Buick Envision?
Rank This Car

Enter your zip to see incentives for a new Envision in your area.