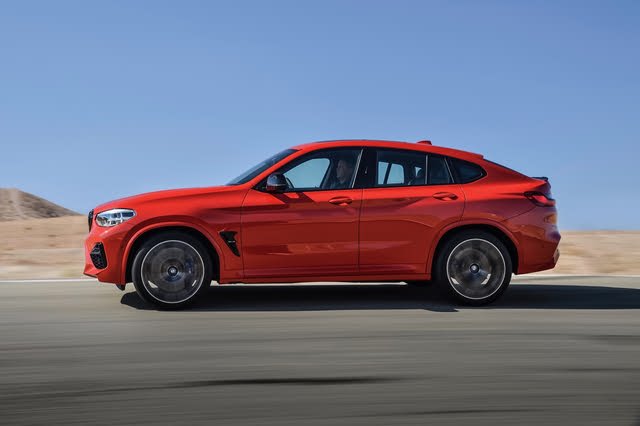 Looking for a New BMW X4 M in your area?

If you’re looking for motorsport DNA in a sleek, practical, and luxurious package, you might seek out the Mercedes-AMG GLC 63 Coupe, Porsche Macan Turbo… or the BMW X4 M. The X4 M is a pretty new product within the BMW product line, having arrived for the 2020 model year. Thus, there are no changes of note for 2021.

BMW sells the X4 M in Base and Competition variants. Both get a twin-turbocharged 3.0-liter inline-six engine. It’s good for 473 horsepower and 442 pound-feet of torque in Base spec, while the Competition gets a bump to 503 hp. A sport-tuned eight-speed automatic transmission with paddle shifters deftly delivers power to all four wheels. There’s also an adaptive suspension on-board, a sport differential, and several drive modes. The Base X4 M storms to 60 miles per hour in 4.1 seconds, but the Competition will do it in 4 seconds flat, and both hit a top speed of 155 mph. Add the M Driver’s package though, and that rises to as much as 177 mph.

As far as safety goes, the X4 M gives you forward-collision warning, automatic emergency braking, blind-spot monitoring, lane-departure warning, speed limit information, and a rear-view camera at no extra cost. The Driving Assistant Plus package piles on adaptive cruise control with full-speed capability and extended collision mitigation. The X4 has not been evaluated for crash safety by any outside agency.

The 2021 BMW X4 is a compact crossover-coupe with serious performance credibility.

Enter your zip to see incentives for a new X4 M in your area.

Is X4 M Sport Activity Really Worth The Added Expense 2021