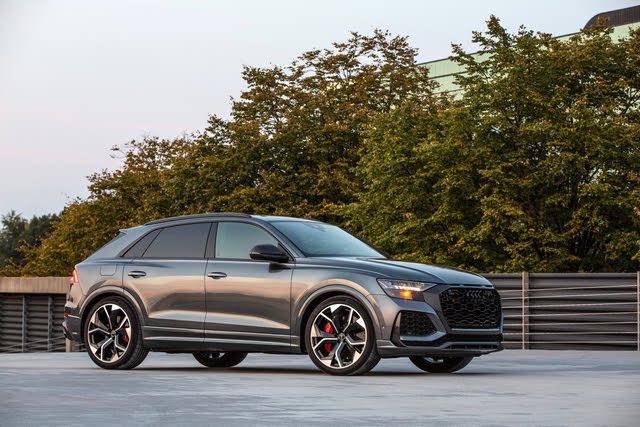 Looking for a New Audi RS Q8 in your area?

With a powertrain shared by automotive outliers like the Lamborghini Urus and the Bentley Flying Spur, the Audi RS Q8 sits on a unique perch in the automotive tree. It’s not often you can roll down the road with more than 60 cubic feet of storage behind you, toss a casual 7:42 lap time at the Nürburgring Nordschleife, and do it all while sitting in massaging leather seats. But that’s the experience the RS Q8 offers. If there’s such a thing as a super crossover, this is it.

Based on Audi’s flagship Q8 crossover (which launched in 2018), the RS Q8 followed just a year later when it was revealed at the 2019 Los Angeles Auto Show. A twin-turbocharged 4.0-liter V8 sends 591 horsepower to all four 22-inch wheels through an eight-speed Tiptronic automatic transmission. The trip from zero to 60 mph will take 3.7 seconds, according to Audi (you can expect the conservative Germans to have padded that number by at least a few tenths, however).

The list of standard features is long—and it’s not all performance-related. There’s plenty of luxury to be had with the RS Q8 as well, with standard adaptive air suspension, heated and ventilated front seats, and Audi’s Virtual Cockpit driver display, which has to be seen to be believed. A 17-speaker Bang & Olufsen stereo handles audio duty and standard blind-spot monitoring, parking sensors front and back, and automatic emergency braking with pedestrian detection adds a bit of safety, although, given the RS Q8’s six-figure price tag, it’s frustrating to see features like adaptive cruise control and lane-departure warning/lane-keep assist on the "available” list. Still, a standard panoramic sunroof, LEDs front and rear, all-wheel steering, and quad-zone auto climate control might take a bit of the sting out of that particular bite.

But let’s be honest, if you’re looking at the RS Q8, you’re interested in performance, and the key here goes well beyond power, though that is substantial. Dual twin-scroll turbos push the 4.0-liter V8 to produce the aforementioned 591 hp, plus 590 pound-feet of torque, with the Quattro all-wheel drive (AWD) system allowing the standard 40/60 front/rear power split to vary anywhere between 70/30 and 20/80. The all-wheel steering offers an impressive five degrees of variation on the rear axle and a sport differential handles torque distribution between wheels on that axle. An electromechanical roll bar that comes with the Dynamics Package means active roll stabilization and if you move up to the Dynamics Package Plus with the upgraded 23-inch wheels, the governed top speed goes from 155 mph to 190 mph!

So what about efficiency? With nearly 600 hp and torque and 5300 lbs of weight, don’t expect anything impressive. Even with that eight-speed automatic, cylinder deactivation, and a 48-volt mild-hybrid system that allows the RS Q8 to coast at speeds between 30 mph and 100 mph, you’re still only looking at 13 mpg city, 19 mpg highway, and 15 mpg combined. Physics is physics, after all.

If the RS Q8 seems like a bit too much for you, the Audi RS 6 Avant puts the same drivetrain into a wagon for less weight, a lower center of gravity, and a lot more storage capacity. The price tag is a lot friendlier too. Either way, if you’re considering a tire-shredding, road-ripping, grocery-getter, Audi’s got the goods.

Enter your zip to see incentives for a new RS Q8 in your area.

Looking for a Used RS Q8 in your area?