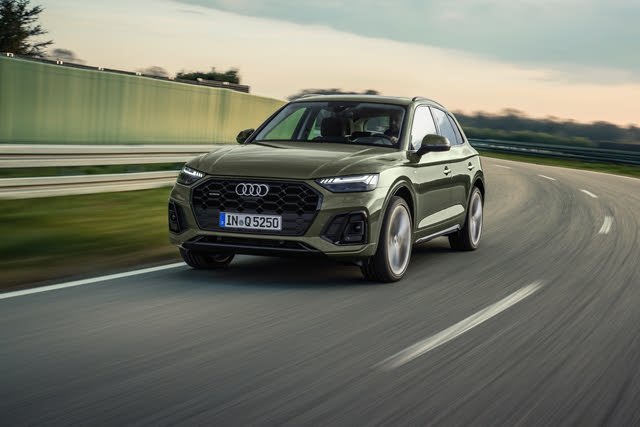 Looking for a New Audi Q5 Hybrid Plug-in in your area?

Audi’s mid-size crossover gets a mild refresh for 2021, with a new front end and fresh bumpers, after its 2018 redesign. There’s a slight power upgrade for the base 2.0-liter engine as well—13 extra horses—but for those who want a little more oomph without jumping up to the SQ5’s V6, the new-for-last-year Q5 Plug-in Hybrid pairs an electric motor powered by a 14.1-kilowatt-hour battery pack to the 2.0-liter inline-four engine for a big power jump.

With this powertrain, the Q5 rolls with an impressive 362 horsepower and 369 pound-feet of torque while still offering buyers up to 20 miles of all-electric range. With the seven-speed S tronic dual-clutch automatic transmission keeping things quick and sporty, the Q5 Plug-In Hybrid Q5 makes a good argument for why it should be the most popular configuration of Audi’s best-selling vehicle.

The Q5 Plug-in Hybrid starts with the 2.0-liter engine that powers the base Q5. There it makes a respectable 248 hp and 273 lb-ft of torque, while returning 23 mpg city and 28 mpg highway. These are numbers that have led the Q5 to being Audi’s best-selling offering, but with the Plug-In Hybrid you’re going to get 65 MPGe. Still not convinced? With all that extra power, the Hybrid will jump to 60 mph nearly a full second quicker than its gasoline brother. Now THAT is ecologically-conscious motoring done right.

Starting with a wealth of standard features in the base Premium trim level, you’ll get 18-inch alloy wheels, LED headlights, leather upholstery, four-zone climate control, and a 10.1-inch touchscreen for the Audi MMI interface. Android Auto and Apple CarPlay are also included here, as well as a nice safety package that includes forward-collision warning with auto brake, and lane-departure warning and intervention.

While the Q5 shows up slightly longer this year, that’s due to the new bumpers rather than any stretching of the wheelbase, so don’t expect any more room inside. You get 25.1 cubic feet of cargo space behind the rear seats, and 53.1 cubic feet with all seats down. Compare that to rivals like the BMW X3 xDrive30e plug-in hybrid, which offers 27.2 cubic feet and 59.4 cubic feet with the rear seats up and down, respectively. The good news is that while the Q5 is one of the heaviest entries in the segment—and the Plug-In Hybrid heavier still—it still manages a 60-0 mph braking distance of just 112 ft, besting most of the competition.

The big issue here is range. With 20 miles of all-electric range, most people will have no issue getting to work and plugging in for the day, but 20 miles already seems antiquated with rivals offering 30 miles or more. Still, a standard wall socket will charge up the batteries in around six hours, and if you’ve got a 7.0-kWh jack you can hook up to, the job will get done in just two. One big disappointment is that the charge cable is just going to rattle around your interior, as there’s no specific place to store it. Still, if you’re looking to get into the plug-in hybrid game, the Q5 is a handsome way to do it.

Have you driven a 2021 Audi Q5 Hybrid Plug-in?
Rank This Car

Enter your zip to see incentives for a new Q5 Hybrid Plug-in in your area.