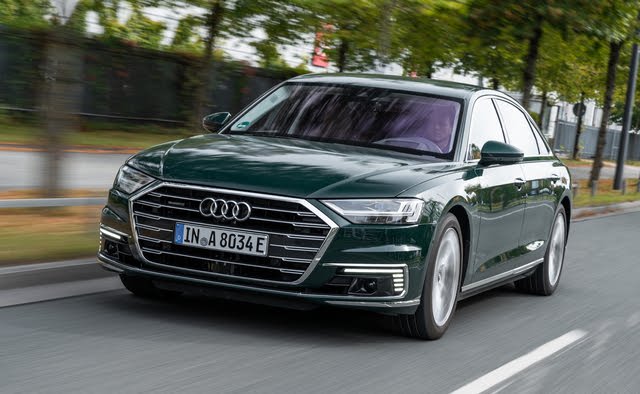 The A8 is Audi’s flagship sedan, last redesigned in 2019. New engine options appeared last year, and this year, there are a few minor feature updates. Rivals include the BMW 7 Series, Mercedes-Benz S-Class, Jaguar XJ, Lexus LS, and Porsche Panamera.

Technically, the A8 is a extended-wheelbase model (years ago, it was called the A8 L, but then the regular-wheelbase model was discontinued). That means it cuts an imposing figure in traffic or at rest, though its overall design is clean and sophisticated, with standout standard and optional touches such as matrix-design LED front lighting, animated OLED rear lighting, and the choice of several lovely wheel designs in a range of sizes topping out at 21 inches.

There are three models available this year: 55 TFSI, 60 TFSI, and TFSI e. All feature Audi’s Quattro all-wheel drive (AWD) system. There’s also a high-performance S8 model, reviewed separately. The 55 TFSI kicks things off with a turbocharged 3.0-liter V6 engine rated for 335 horsepower and 369 lb-ft of torque, as well as decent fuel economy ratings of 17 mpg city, 26 highway, and 21 combined. The 60 TFSI is powered by a twin-turbocharged 4.0-liter V8 engine rated for 453 hp and 487 lb-ft. These models both feature mild-hybrid technology and an eight-speed automatic transmission. Finally, the TFSI e is a plug-in hybrid comprised of a turbocharged 3.0-liter V6 engine, an electric motor paired with the eight-speed automatic transmission, and a 14.1kWh lithium-ion battery, for total ratings of 443 hp and 516 lb-ft. It’s rated for 54 MPGe in combined driving.

The cabin design exemplifies minimalist luxury, with standard leather upholstery and 22-way, power-adjustable, heated and cooled front seats, which are newly standard for this year. Other features include a panoramic sunroof, proximity keyless entry, and quad-zone automatic climate control. There are tons of options for customizing the interior, as well, such as the Black Optic and Sport Style trim packages and the Executive Package, which decks out the rear row to make a sweet livery vehicle.

There aren’t many models competing for your full-size luxury sedan dollars, but the competition is still tough, and Audi manages to make the 2021 A8 stand out in all the right ways.

Cyrus F Volkswagen should Dump the current Ceo and all of his personnel and hire me as the new Ceo! my first order of business is to get rid of the audi brand, make again volkswagen the real dependable car that people loved with air cooled rear 4 cylinder engines rwd and awd. Make the id series of cars and crossovers the all electric brand,, and make the Arteon the luxury sport Flagship of the company get rid of that big stupid looking vw badge on the front and rear of the arteon and just rebadge it as Arteon LGS Premium keep the same beautiful looks and shape just make it the size of the audi A8 L and build it on the audi A8 L platform. It should also have Six engine options(1) dural electric motors driving front and rear wheels (2) 2.0L turbo 4-cyl (3) 3.0 V6 twin turbo gasoline (4) 3.0 twin turbo diesel (5) 4.0L twinturbo V8 (6) 6.2 L twinturbo W12. We would keep Bentley' Rolls Royce' Porsche' Volkswagen' Electric ID' Arteon' we would buy Jeep' Greyhound' and Amtrack'