Acura’s sport sedan runs at the competition—this time with a great soundtrack. 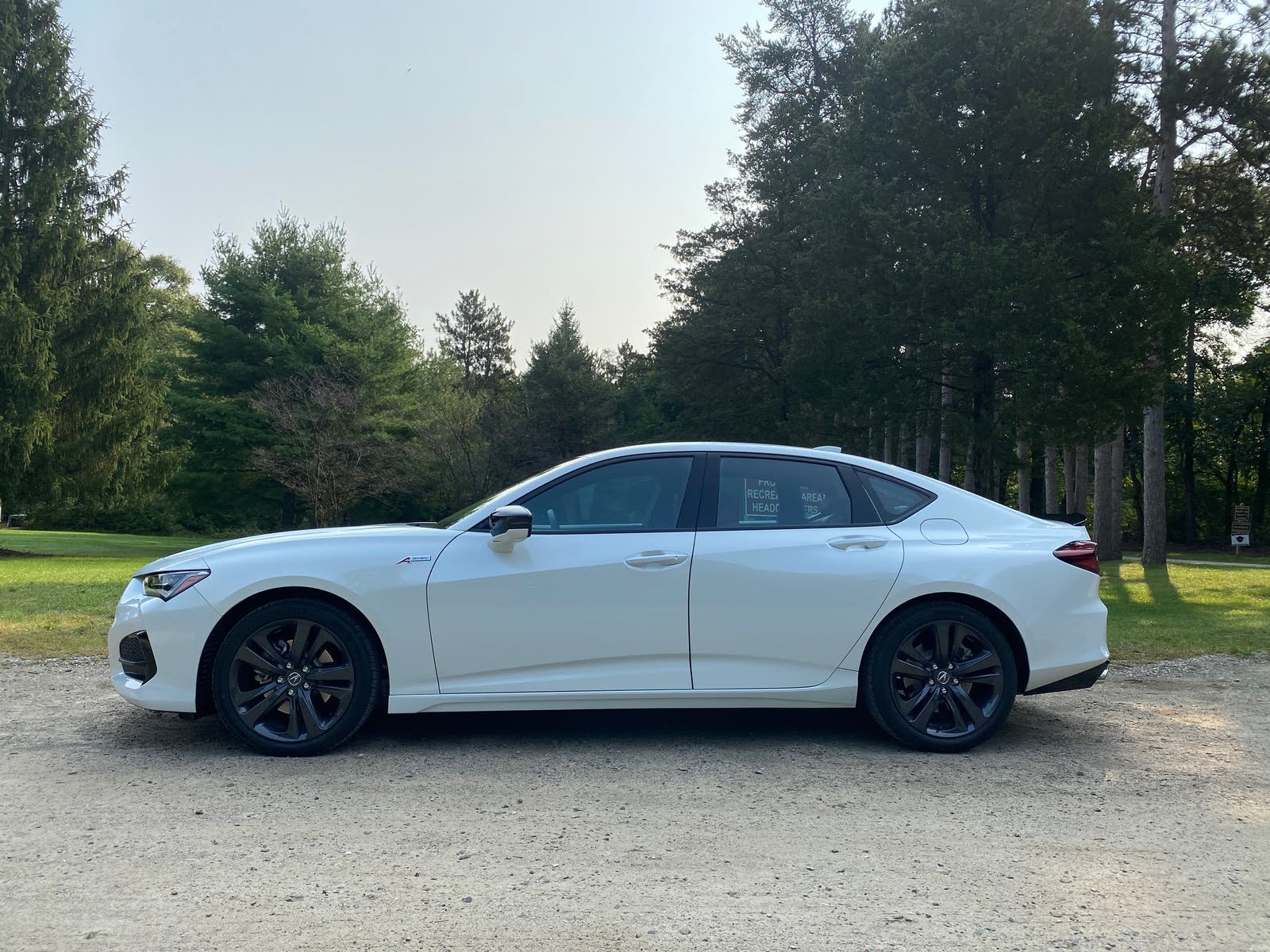 Acura, the premium brand in the Honda portfolio, has released the second-generation of its midsize sport sedan, the TLX. Now on its own new platform, no longer shared with the Honda Accord, TLX arrives with a new exterior, interior, and powertrain choices. Positioned above the compact ILX in the Acura lineup, the new TLX strives to make its mark for 2021. 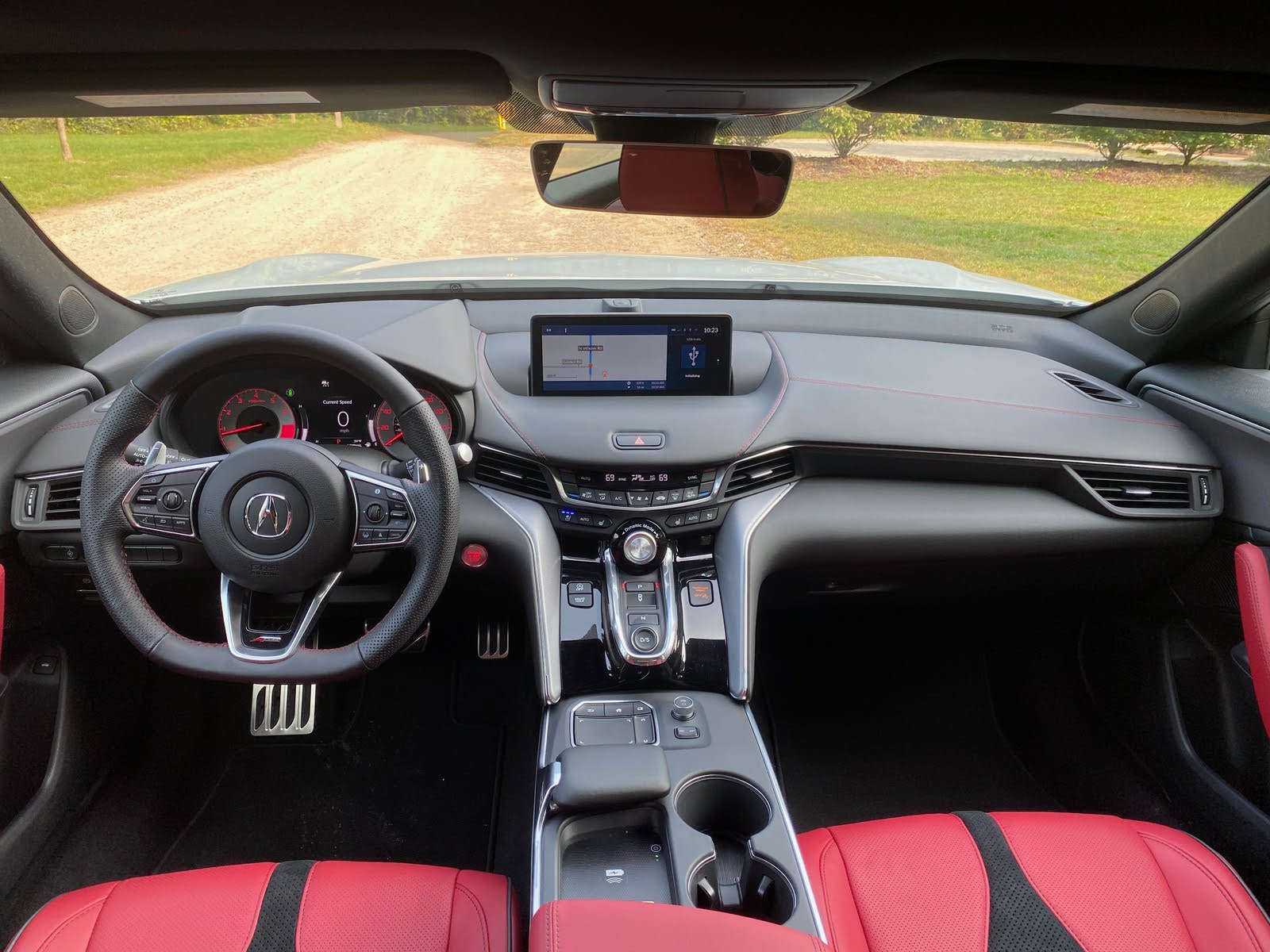 The TLX is a good-looking, sporty sedan in a class crowded with the same. It is distinguished by a very assertive stance accentuated by a steeply raked windshield, fastback-style roofline, and integrated tail spoiler. There’s nothing timid about TLX’s face, either, with a grille pattern that looks like it exploded out from the big Acura logo at its center, and squinting lines of “jewel eye” LED headlights arrayed horizontally on each side. Twin trapezoidal tailpipes flow exhaust below the rear bumper. Paint quality is top-notch, and tasteful badging and hints of chrome enhance the look of this premium sedan.

Inside, a similar level of quality and attention to detail is on display. Acura describes its driver’s position as a “sport sedan cockpit,” and the descriptor is apt. The dash is sectioned off with different functions clustered together, and authentic materials with good hand feel throughout the design. If it looks like metal, it is metal; if it looks like leather, it is leather; if it looks like wood, it is wood. Gaps are tight and even, fonts match, and there’s good flow and visual movement and interest throughout. The 10.2-inch, landscape-oriented infotainment screen is neatly mounted at the top of the center stack, right where it should be, and it manages to look like it is floating above the dash intentionally, not as an afterthought. 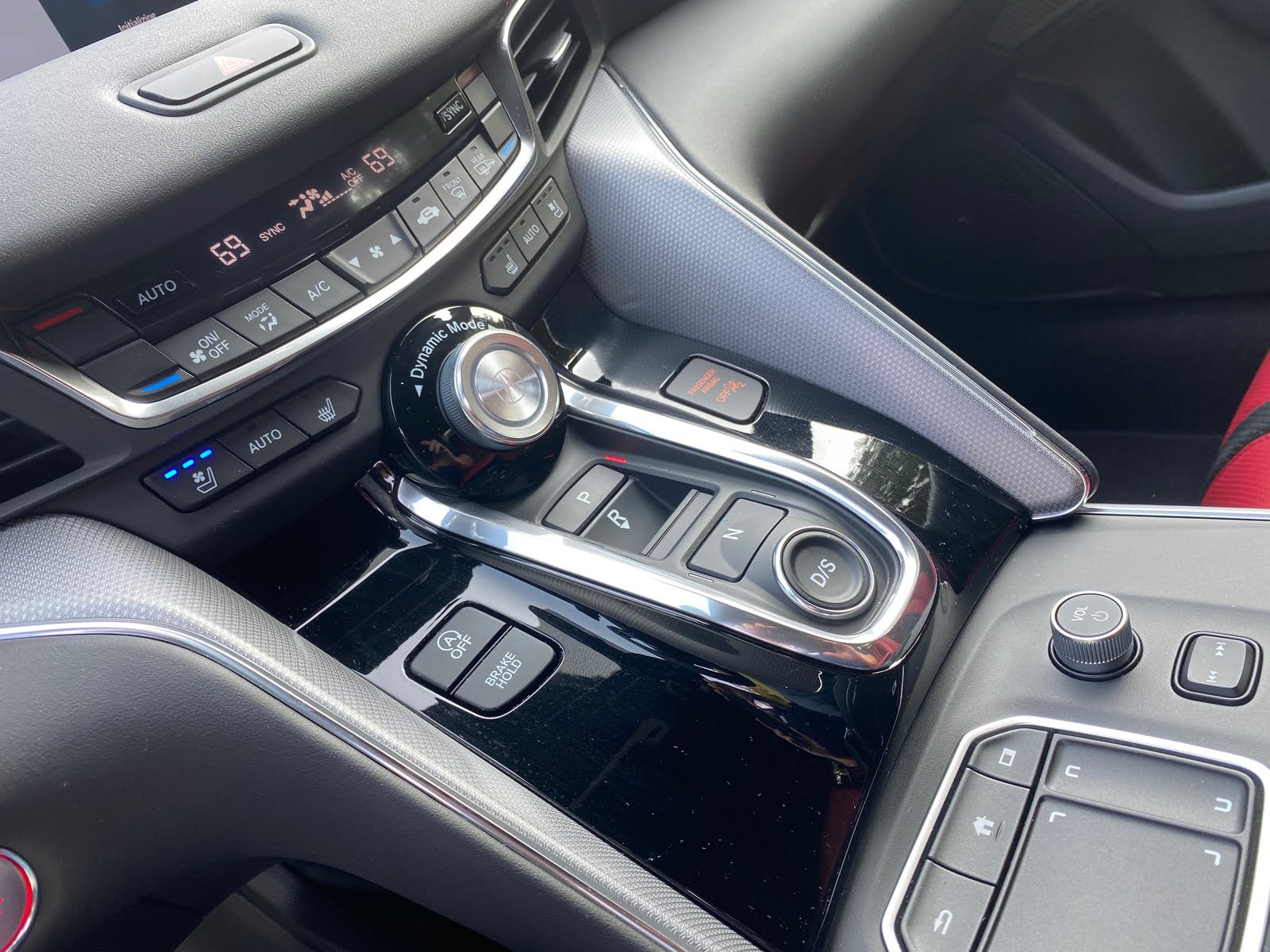 If you’re going to compete in the premium sport sedan class, you’ve got to pay attention to the “sport” part of the equation. Acura developed a new engine for TLX, a turbocharged 2.0-liter inline four-cylinder direct gasoline-injected unit with variable valve timing and double overhead cams, tuned to produce 272 horsepower and 280 pound-feet of torque. It uses a drive-by-wire throttle system and a shift-by-wire connection to its standard 10-speed automatic transmission. Front-wheel drive (FWD) is standard on the base models, and Acura’s Super-Handling All-Wheel Drive (SH-AWD) is available on all models. The EPA estimates fuel economy at 22 mpg city, 31 mpg highway, 25 mpg combined for FWD models, and 21 /29/24 combined for AWD.

Sporting performance is about much more than just power figures; it’s about how the power is delivered to the road, how the car handles, steers, and stops. Having the combination of standard drive-by-wire, shift-by-wire, and electric power steering allows for distinct driving personality from the Integrated Dynamics System (drive modes), so that when you select Comfort, Normal, Sport, or Individual mode, the car adjusts those parameters accordingly. The Advance package adds adaptive dampers to the mix, another variable that can be tuned to unleash the desired ride behavior. The TLX is nimble, easy to drive, and fun to toss into the corners when the opportunities allow. Acura reports 50% greater global torsional stiffness and up to 100% greater rigidity at the suspension mounts over the outgoing TLX, and while we have no way to confirm this report other than a seat-of-the-pants feeling, we can say that TLX feels solid and substantial over a multitude of road surfaces, and that its weight feels well distributed and balanced.

At the launch event that we attended in Michigan, we drove A-Spec and Advanced examples of the TLX, each equipped with SH-AWD—no FWD examples were available for testing. Our drive was on public roads, on a loop that went through suburban neighborhoods, rural backroads, and brief highway blasts, with as many curvy roads as flat southeastern Michigan can muster (which is to say, not that many). The TLX performed as advertised, with an eager, sprightly character and inspiring handling. There are a lot of opportunities to personalize the setup on a TLX, and it was tantalizing to imagine what more time in the cockpit could deliver. Sport mode was more to our taste, mostly because it tamed a slight amount of turbo lag that cropped up in Normal and Comfort modes, and also delivered a richer exhaust note. 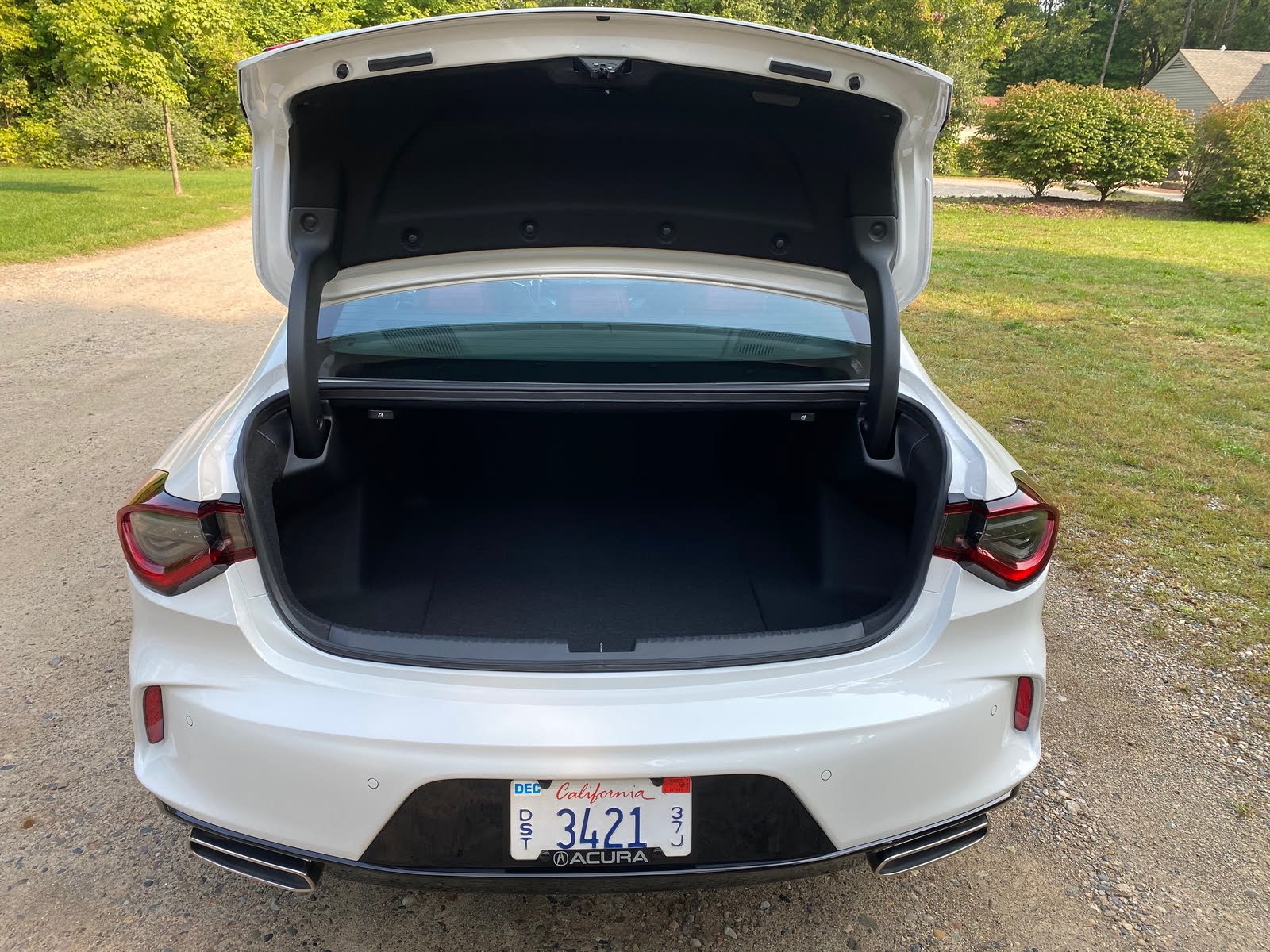 Many of the performance decisions that Acura made on the TLX have had a real impact on the form and function of the car. For instance, having a shift-by-wire transmission frees up designers and engineers to re-think the gear selector mechanism. They don’t need to make space in the center console for a gear selector lever or shift linkage; they don’t need to put a shifter on the column; they can put the controls anywhere. On the TLX, the transmission is engaged via a control panel in the center stack, modeled after the controls on the NSX. The low-profile controls are simple, straightforward, and easy for the driver to access, and they are backed up with a pair of paddle shifters on the steering wheel. That means that the center console can house the interface for infotainment, a mini touchpad with hard buttons and a smartly positioned hand rest to ease operation and precision. Two big cupholders are also on the center console, tucked over to the passenger’s side, and out of the way of the driver’s hands and elbows. There are also bottle holders in the door panels. Under the armrest, there’s a good-sized storage cubby.

The rear seat is comfortable for two adults, with adequate head- and legroom for average-sized people. The center position in the second row is for short hops only. Both the driver and the front passenger are treated to comfortable, supportive sport bucket seats, available with perforated Milano leather. They have 12-way power adjustability, including four-way power lumbar adjustability and four-way adjustable headrests. Heated front seats are standard; ventilated front seats come with the A-Spec and Advance Packages. 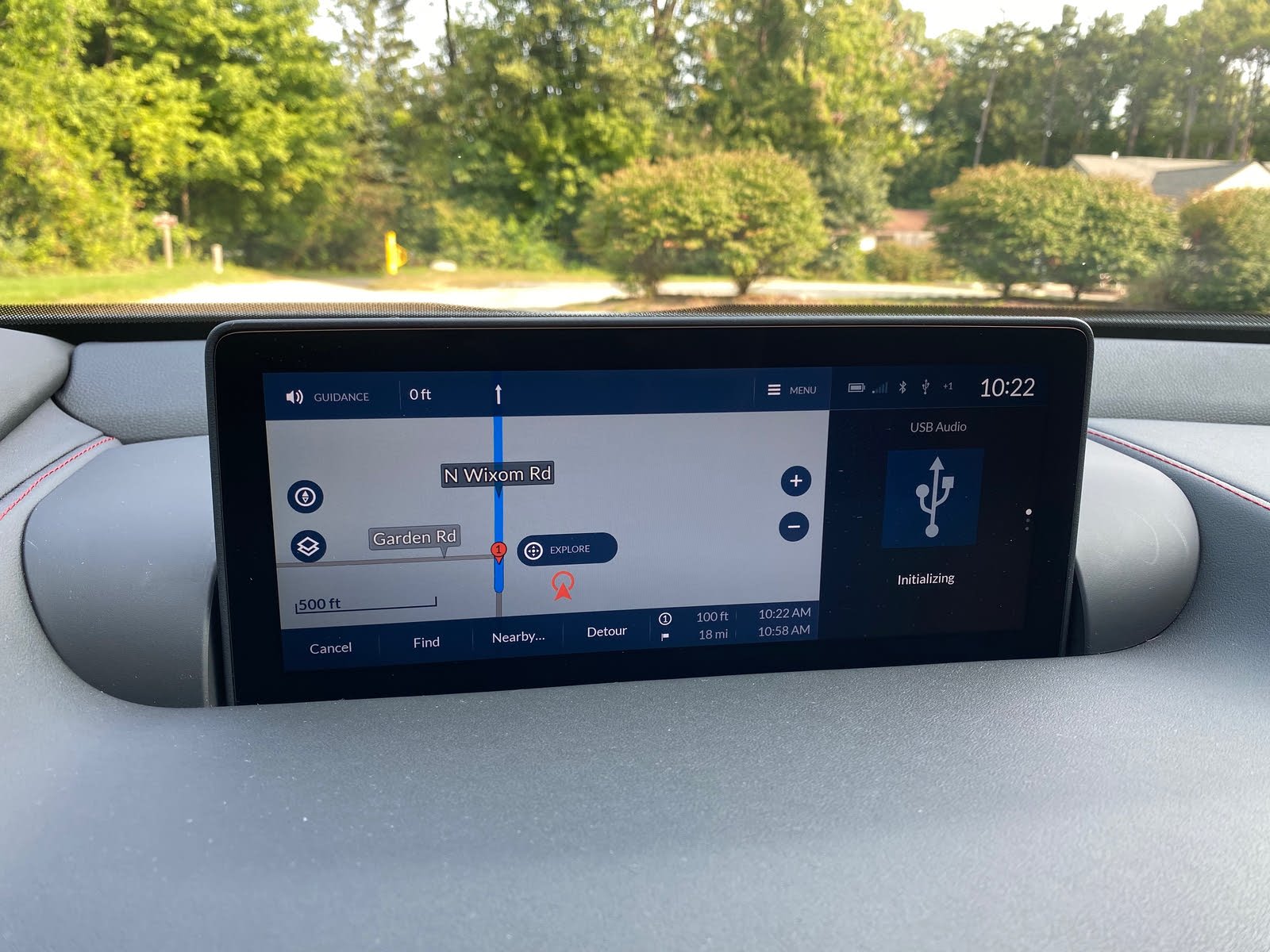 TLX is loaded with technology, both on the performance end and on the comfort and convenience end.

Performance technology we’ve already discussed includes drive-by-wire, shift-by-wire, and SH-AWD. Additionally, the 10-speed automatic transmission is equipped with several useful technologies. Grade Logic Control alters the transmission’s shift schedule while ascending or descending hills; Shift Hold Control keeps the transmission in a lower gear during aggressive driving; Cornering G Shift Control monitors each rear wheels' speed, and avoids upshifting while the car is turning, which could destabilize the car. All of this happens in the background, without conscious driver intervention, using technology to read the driver’s actions to uncover intention, and predicting and implementing the best actions.

Some of the technology is not as subtle and is more for occupant enjoyment rather than ride enhancement. There are multiple ambient interior lighting and illumination themes. These can be triggered automatically in concert with the drive modes, or owners can customize lighting to match their moods (or clothing, or whims, or favorite sports team colors, or whatever). Cool and fun.

The Advance Package includes a head-up display that works with polarized sunglasses, a big plus with this useful technology. In an entertaining tip of the hat to the TLX’s sporty stance, there’s a G-Meter and Turbo Boost Indicator included on the instrument panel. 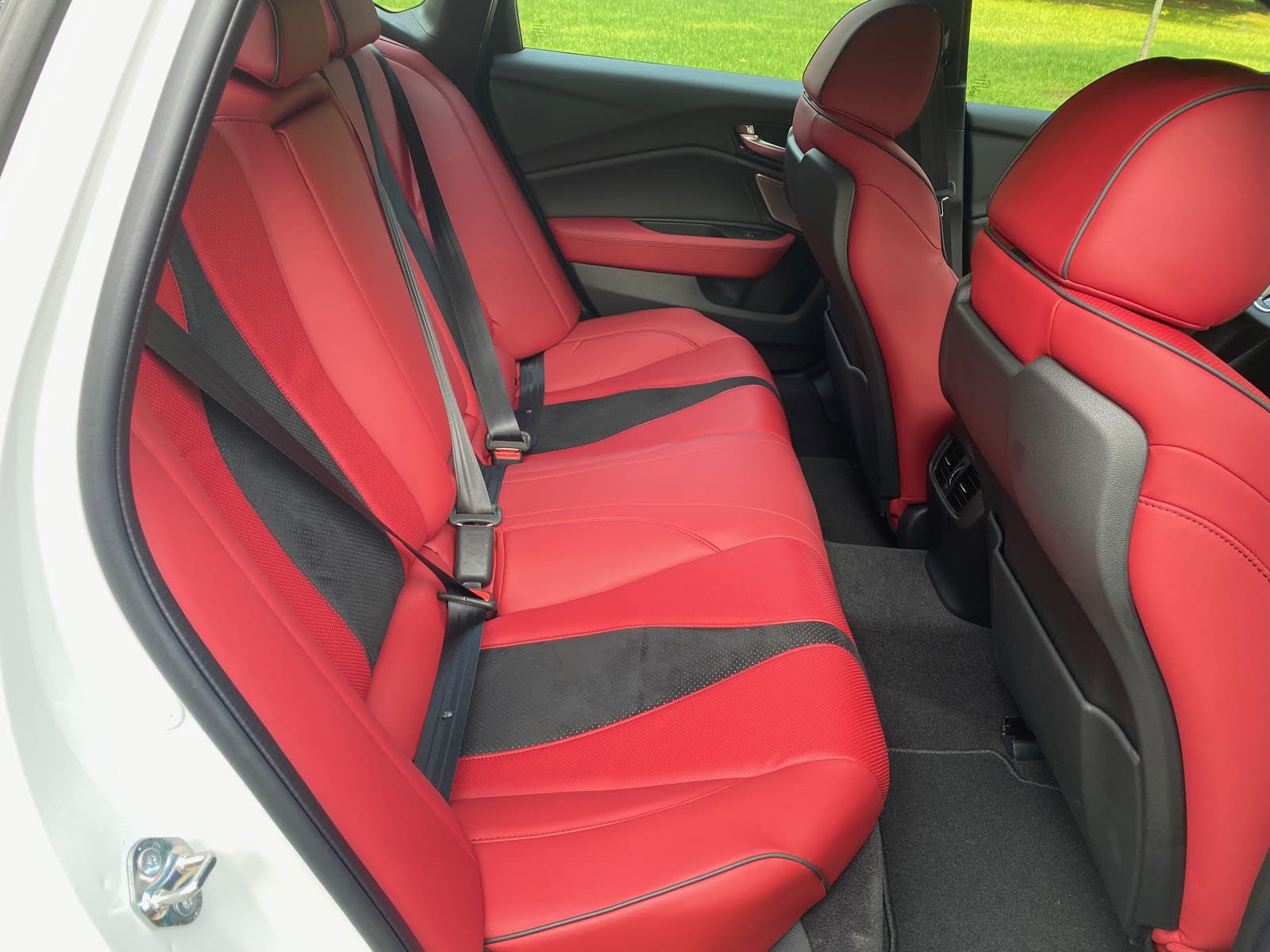 The 2021 Acura TLX has not yet been tested by the Insurance Institute for Highway Safety (IIHS) or the National Highway Traffic Safety Administration (NHTSA), but the previous generation received an overall “Acceptable” rating from IIHS, and a five-star rating from NHTSA. Acura engineers have targeted five-star ratings and Top Safety Pick + ratings for the 2021 TLX. 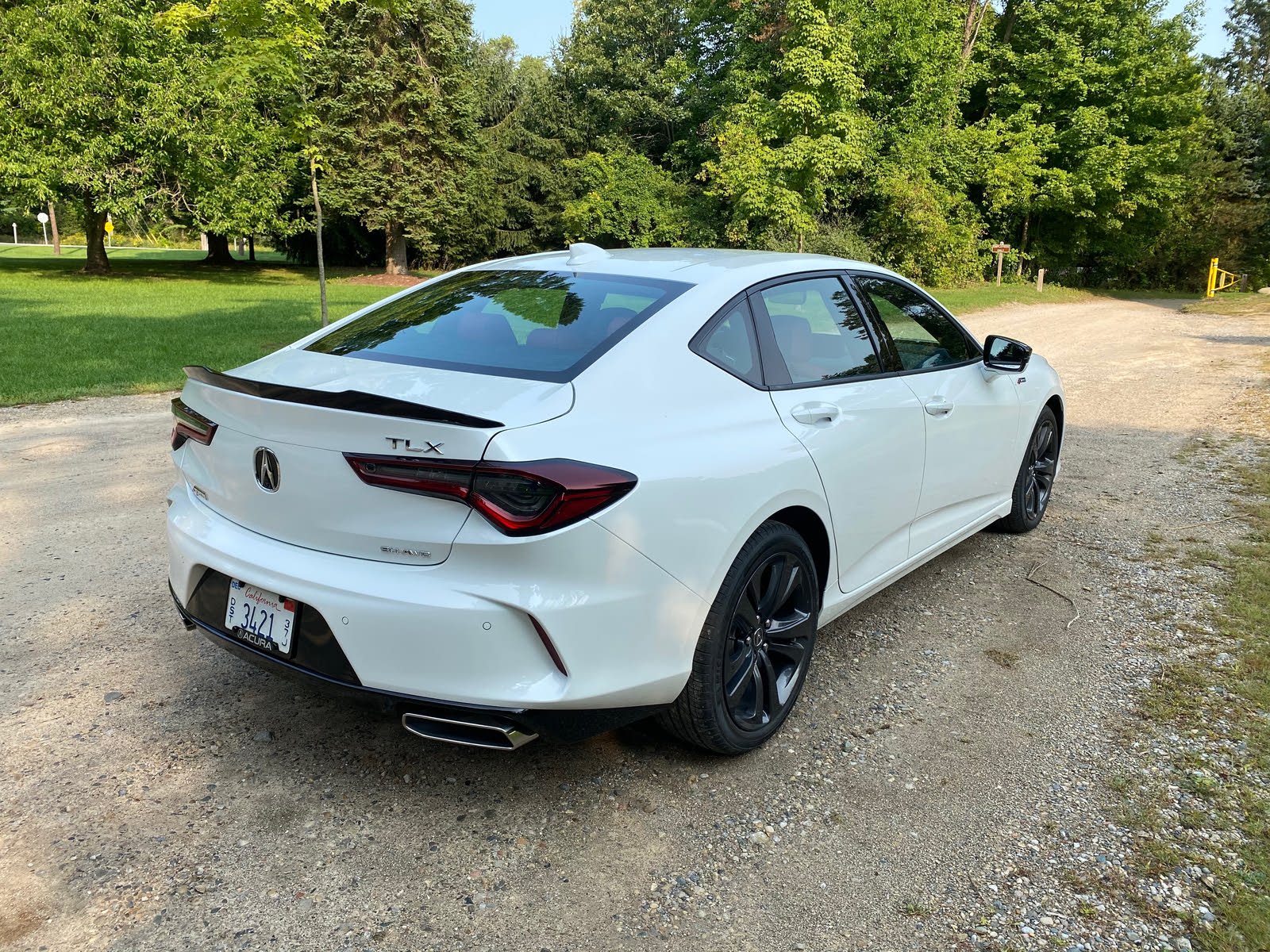 Acura has a streamlined pricing structure, which makes it pretty simple to select the model that matches your needs. The base TLX starts at $37,500. The Tech trim level (which Acura refers to as a "package") starts at $41,500. A-Spec starts at $44,250. Advance starts at $46,300. An Acura TLX Type S model is promised for later in the model year, with pricing to be announced. You can upgrade any trim level from FWD to SH-AWD for an additional $2,000.

Acura has positioned the TLX as a segment-buster, straddling the line between compact and midsized premium sports sedans. It expects buyers to compare the TLX with the Audi A4 and A6, BMW 3 Series and 5 Series, and Mercedes-Benz C-Class and E-Class, where it looks like a comparably equipped TLX comes in at a lower price than either compact or midsized competitor. We’d add the Lexus IS, Infiniti Q50, Cadillac CT5, and Volvo S60 to the list for consideration.

There are many reasons buyers aspire to own premium sport sedans. Of course, performance, luxury, and comfort are big parts of the equation, but image, status, and style also contribute to the decision to buy. Acura qualifies as a premium brand by virtue of its quality and level of technology and craftsmanship, but it doesn’t have the prestige of the German brands or even Lexus in the United States right now, nor does it have an air of exclusivity. For some, these shortfalls might be a reason to avoid a TLX; for others, the fact that the 2021 Acura TLX represents a thoughtful, independent choice may be just the ticket.

Have you driven a 2021 Acura TLX?
Rank This Car

118 views with 3 answers (last answer about a year ago)