Irresistible styling has the power to sway consumers, and the 2020 Volkswagen Atlas Cross Sport has plenty of it. 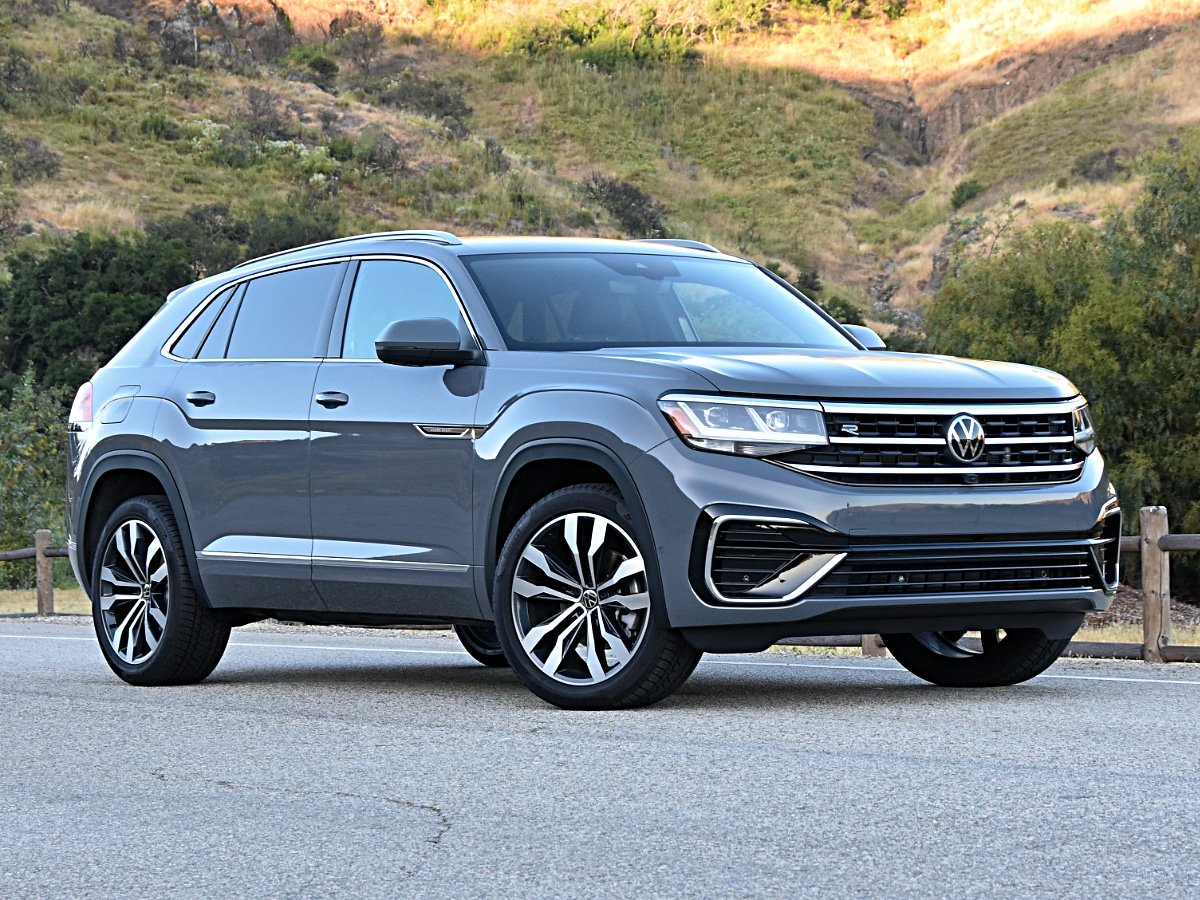 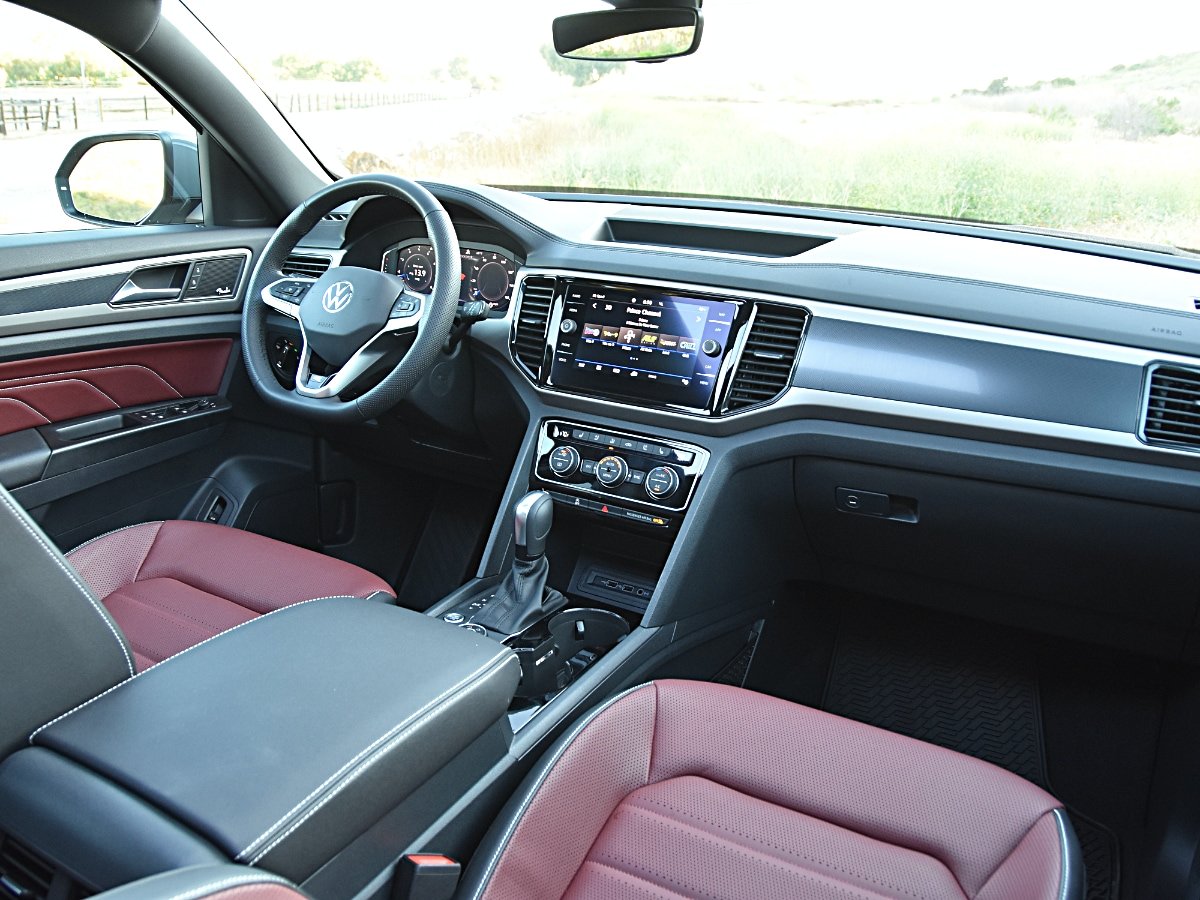 Volkswagen offers the Cross Sport in a convoluted blizzard of trims, so we’ll summarize it in a logical way. You choose between S, SE, SEL, and SEL Premium specification, and then decide whether you want the available Technology and R-Line packages, depending on the version.

Styling is going to sell lots of Atlas Cross Sports. Measuring 5.2 inches shorter in length and 2.2 inches lower in height, it’s got an SUV coupe look thanks in part to its steeply angled rear liftgate. Literally, the only reason to skip the Cross Sport in favor of the larger Atlas is for the latter’s cargo volume and third-row seat.

My test VW Atlas Cross Sport had SEL Premium trim with the R-Line package, and it looked terrific. The machined-finish 21-inch wheels are almost pornographic in size, and in combination with the optional Pure Gray paint, they give the chopped-top Cross Sport a custom appearance.

Open the door and the interior looks good at a glance, especially in the test vehicle’s unusual Burgundy and Titan Black two-tone color scheme. But closer inspection reveals plenty of hard plastic commensurate with the Cross Sport’s base price. Still, the design, detailing, and materials where you’re most likely to come into contact with the cabin are nicely done for the segment, and the available ambient lighting is a nice touch. 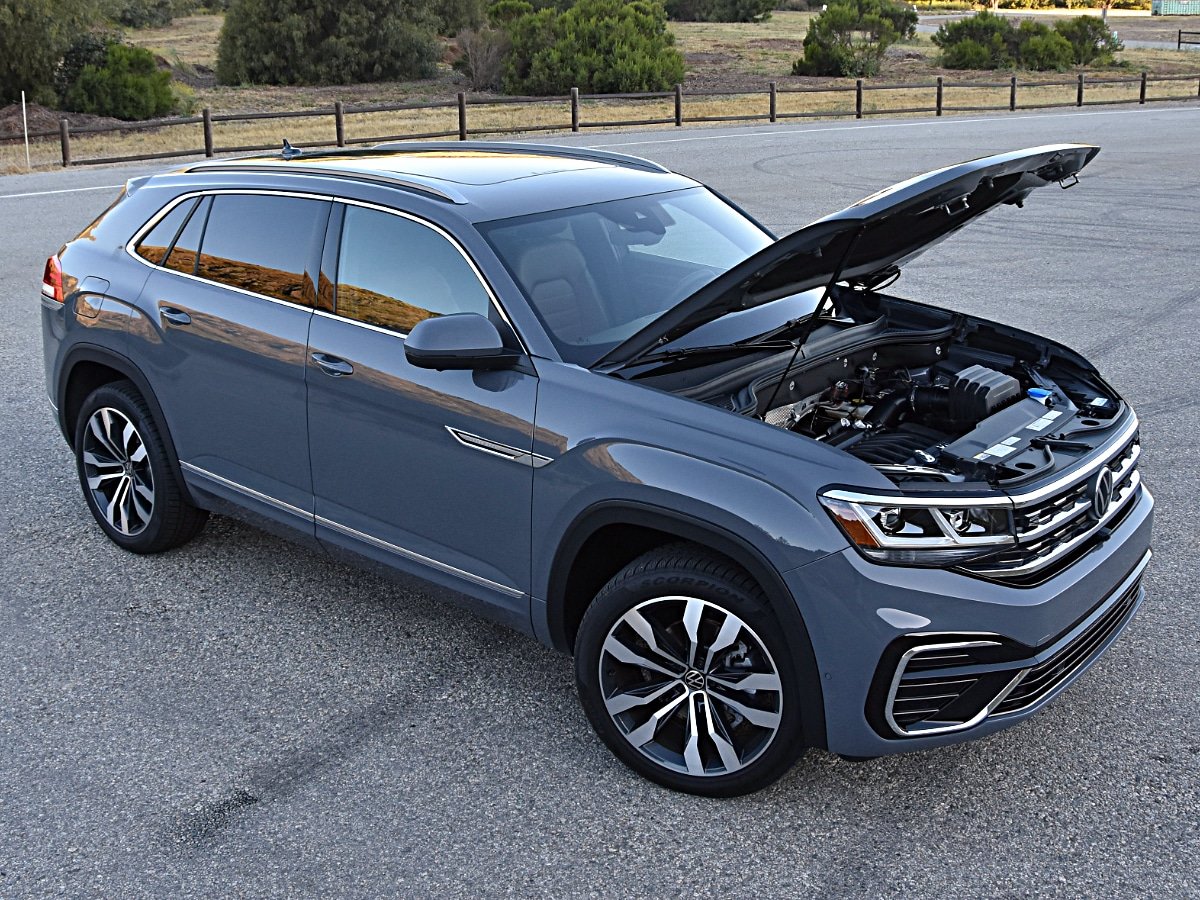 A 2.0-liter four-cylinder turbo engine comes standard in the Atlas Cross Sport, making 235 horsepower at 4,500 rpm and 258 pound-feet of torque starting at 1,600 rpm when you’re burning premium gas. This engine is related to the one powering the Golf GTI, which sounds appealing until you consider the Atlas Cross Sport’s portly 4,103-pound curb weight.

Most likely, you’ll want the optional 3.6-liter V6 engine, which whips up 276 hp at 6,200 rpm and 266 lb-ft. at 2,750 rpm. That’s a low torque peak for a normally aspirated V6, helping the Atlas to feel sprightly around town and in daily-driving situations. The maximum towing capacity with this powerplant measures 5,000 pounds.

Each engine uses an 8-speed automatic transmission with a sport mode. In most instances, the Atlas is front-wheel drive. However, you can upgrade to the 4Motion all-wheel-drive (AWD) system with Active Control traction settings. This is the latest version of 4Motion, which sends up to half the engine’s power to the rear wheels only when necessary. The rest of the time, the rear wheels are decoupled from the drivetrain.

The V6 is adequate in terms of power and refinement. Many people will find it acceptable, but in my opinion, this vehicle is begging for a de-tuned version of the mild-hybrid turbocharged 3.0-liter V6 that Volkswagen Group uses in its Audi models.

Similarly, the 8-speed automatic transmission goes about its business without fanfare, the only complaint being its delayed downshifts when exiting a corner or a curve in normal mode. Switching to Sport mode solves the problem, but that’s not the default setting.

Accelerate from a stop while turning, such as when making a right on red or a left across traffic, and 4Motion allows some front-wheel slip before the center differential engages and transfers power to the rear wheels. The 4Motion AWD system feels more effective when powering out of a corner or curve.

Active Control gives the driver a choice between On-road, Snow, Off-road, and Custom Off-road traction control settings. The Cross Sport supplies 8 inches of ground clearance but, given the fancy wheels and tires, I kept the test vehicle on the pavement.

Within the On-road setting, additional selections include Eco, Normal, Sport, and Individual. These adjust the powertrain, steering, and adaptive cruise control system behavior accordingly. With the Active Control driving mode in On-road Sport, the transmission in sport mode, and on fairly smooth pavement, the big Atlas Cross Sport hustles. Braking is exceptionally good, and the variable-assist steering is fast and accurate, if a bit light on center.

Volkswagen should, however, consider offering an adaptive damping suspension for the Atlas Cross Sport. The strut front and multi-link rear underpinnings are tuned on the soft side, allowing too much unwanted body motion. Sharper impacts also encroach on ride quality and cabin serenity, unsettling the SUV’s directional stability.

Body roll is beautifully controlled in curves, though, and grip from the 21-inch wheels and tires is remarkably sticky. It can be a pleasure to drive, but it is a thirsty beast, rated to get 19 mpg in combined driving. I averaged 18.7 mpg on my testing loop. 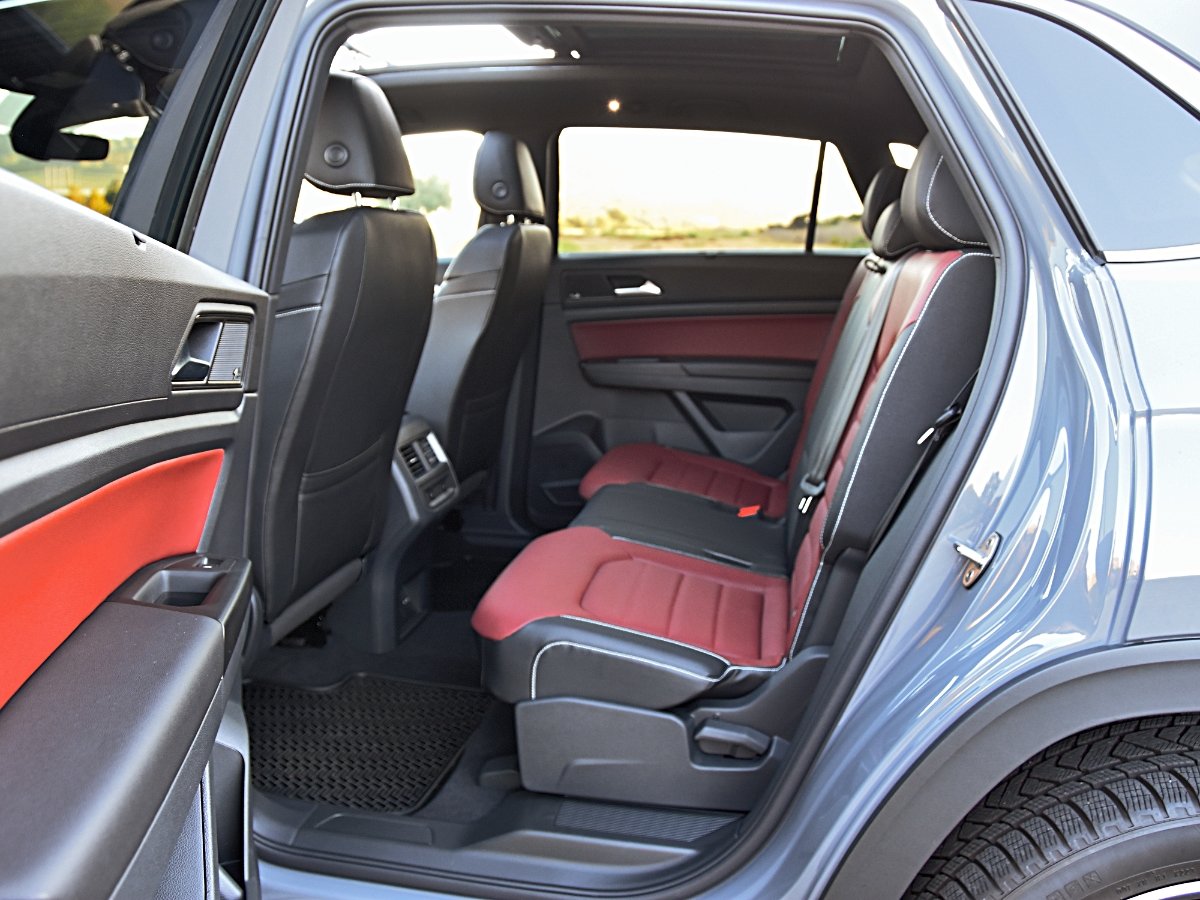 While the Atlas Cross Sport is a little smaller than the Atlas on which it’s based, it still seems huge inside.

Up front, facing the wide dashboard and a heated steering wheel, the test vehicle offered large heated and ventilated leather seats with numerous power adjustments for both the driver and front passenger. The front seats proved comfortable for hours of driving.

While the Atlas Cross Sport is perfectly primed to combat chilly winter weather, on a warm sunny day in May the Cross Sport’s dual-zone automatic climate control system struggled to overcome the direct sunlight beating down onto the black dashboard, especially when the engine’s automatic stop/start system engaged at traffic lights. Outside of urban areas, with the engine running continuously, the problem largely disappeared. And yes, you can manually turn off the auto stop/start system.

Useful storage space is plentiful, from the large center console storage compartment under the center armrest and the tray forward of the shifter to the door panel bins and the glove box. And while the rakish roofline restricts cargo room in favor of style, the Atlas Cross Sport remains accommodating of cargo with 40.3 cubic feet of space behind the back seat and 77.8 cubes with it folded down. 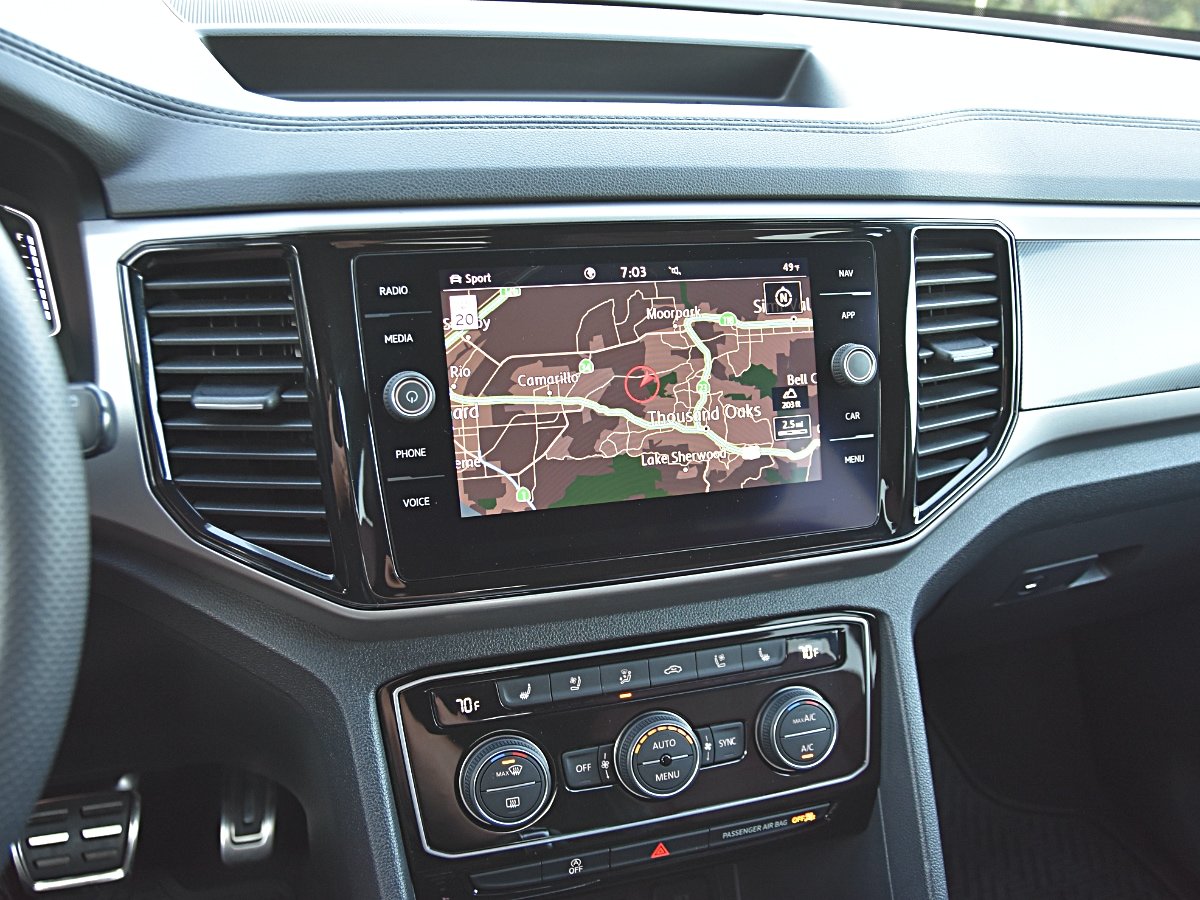 Volkswagen offers three different infotainment systems in the Atlas, and the top-trim test vehicle included the top-shelf technology. With a glass-covered 8-inch capacitive touchscreen display, large virtual menu short cut buttons, and two stereo knobs, the aesthetic is clean and simple, like the rest of the Cross Sport’s cabin.

Aside from USB-C ports, nothing is missing from the audio system, which accommodates two Bluetooth device pairings at the same time. Volkswagen also provides robust Car-Net smartphone and smartwatch connected services including WiFi, remote engine starting, a car finder, automatic collision notification, SOS emergency calling, and safe teen driving features. An opt-in DriveView program monitors your driving habits and reports them to your insurance company so that you can earn discounts for good behavior.

The user experience is mostly agreeable, and the 12-speaker Fender premium sound system played Prince’s “17 Days” at 75% volume without a hint of distortion (thank you, SiriusXM, for the Prince channel).

Unfortunately, the Cross Sport lacks a natural voice recognition system, and it did not pass any of my standard prompt tests. It couldn’t even “find the closest hospital,” which is something a person who is frantic for medical help might naturally ask. Therefore, you’re going to need to use Apple CarPlay or Android Auto, or you’ll need to learn and remember the system’s specific voice command menus. 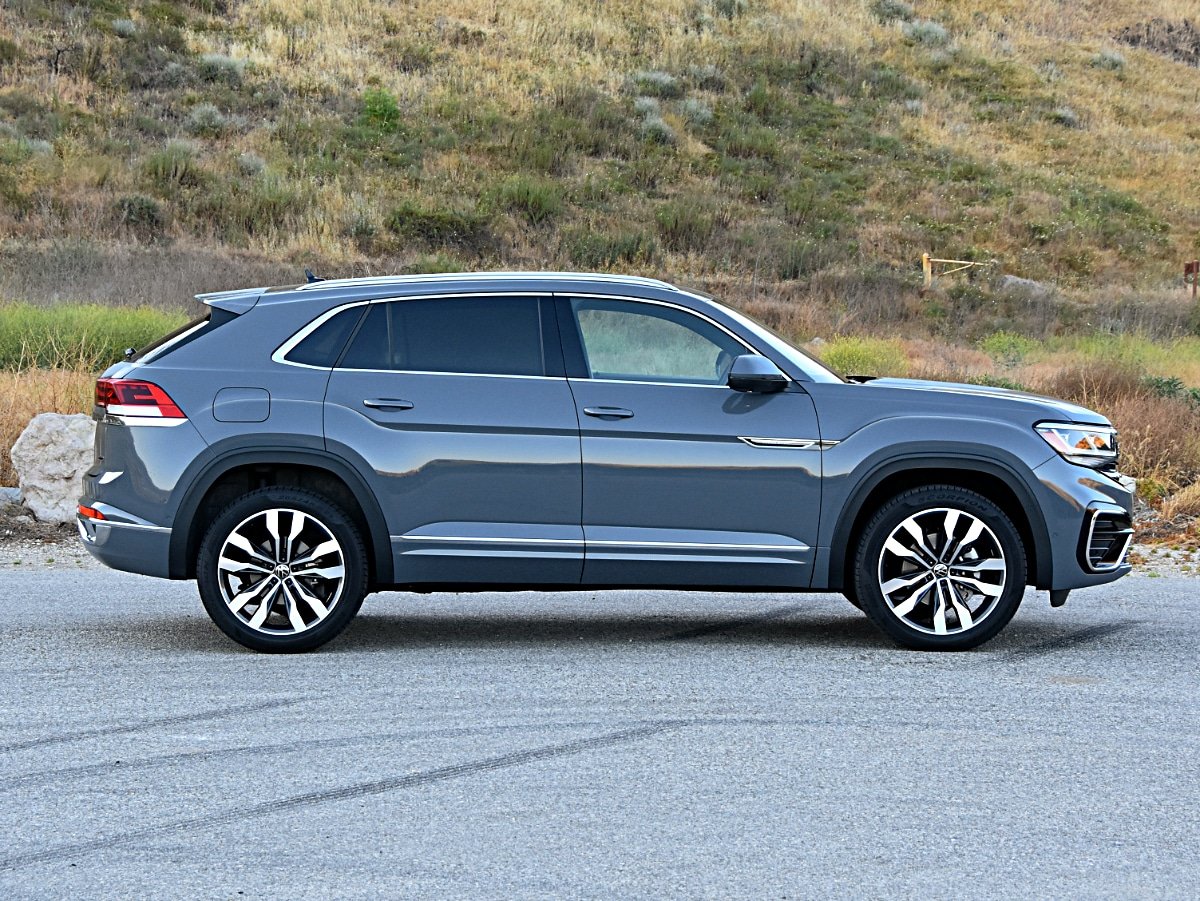 There is no shortage of safety equipment for the Atlas Cross Sport, and even the base trim level includes the most important and effective advanced driving assistance systems (ADAS). The SUV even includes a standard automatic post-collision braking system.

Naturally, the SEL Premium R-Line test vehicle had everything on it. During testing, the ADAS operated in a smooth, refined, and subtle fashion, but I quickly decided I did not want lane assistance turned on. A button on the steering wheel calls up ADAS settings within the instrumentation, and you can turn it off there.

Unusual ADAS inclusions include a road-sign recognition system and Traffic Jam Assist, which provides forward collision warning, semi-autonomous steering, braking, and acceleration assistance at speeds under 37 mph. Additionally, the Lane Assist system tries to prevent a driver from changing lanes when another vehicle is in the Cross Sport’s blind spot monitoring, and the rear cross-traffic alert system includes an automatic emergency braking function.

Crash-test results aren’t in yet for the Atlas Cross Sport, but the larger Atlas performs well in this respect. 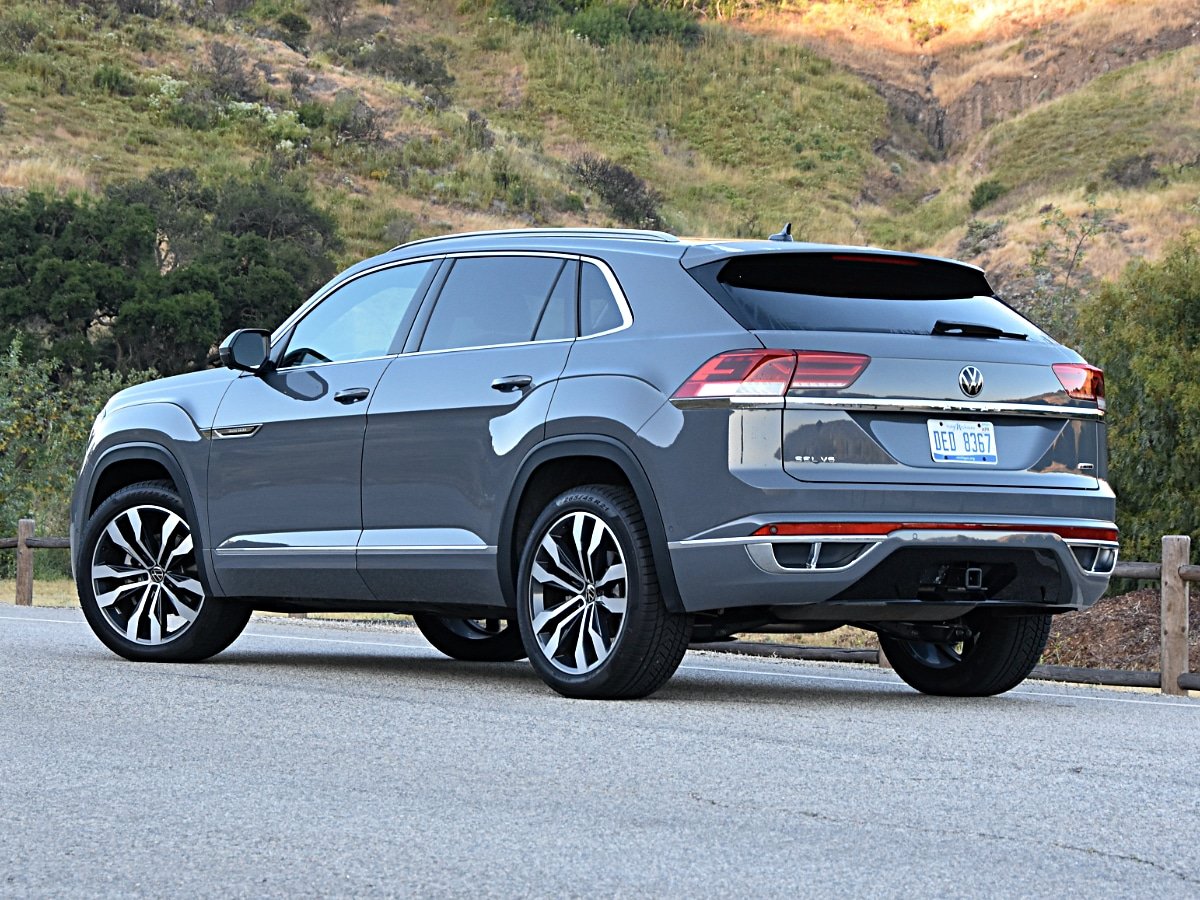 Prices start at $30,545 and rise to as much as $50,190, and that’s before adding the destination charge to ship the Atlas Cross Sport from its Chattanooga, TN factory to your local dealership.

On the low end, this pricing range overlaps with primary competitors, including the Chevrolet Blazer, Ford Edge, Honda Passport, and Nissan Murano. However, loaded versions of the Honda and Nissan cost thousands of dollars less than the Volkswagen. Hyundai and Kia also play in this space (Santa Fe and Sorento), and anything they give up in terms of size, they more than make up for in terms of value.

Volkswagen attempts to sweeten the deal with a standard 4-year/50,000-mile bumper-to-bumper warranty and a 2-year/20,000-mile free maintenance plan, but even so, unless VW plans to discount this SUV in the same way Chevy and Ford do theirs, the Atlas Cross Sport is priced at a premium.

Factor in the VW’s unimpressive fuel economy, and you’ll find the greatest satisfaction in owning a Cross Sport for its looks and utility rather than any financial reward.

What's your take on the 2020 Volkswagen Atlas Cross Sport?

salocin Lots of hard plastic. They're asking an awful lot of money for near luxury. Better values can be found in Mazda and Hyundai. But does drive really nice. also has the trick navigation that can be put in the driver's dash.

Have you driven a 2020 Volkswagen Atlas Cross Sport?
Rank This Car

Is There An Optional Two Row Seating?

I've been researching the Atlas since it came out. I had read that they were going to make a 2-row in addition to the 3-row and make it sportier looking. Is this still going to happen? Thanks!

I've been watching the VW Atlas since it first came out. I like the R-line look more than the Tiguan. I currently have a 2015 Jeep Grand Cherokee that I bought used (without noticing is didn't have ...