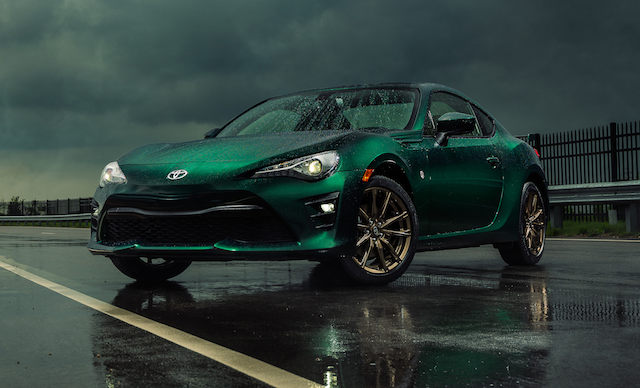 Looking for a New Toyota 86 in your area?

The Toyota 86, formerly known as the Scion FR-S, is among the few affordable rear-drive (RWD) performance cars available. Co-developed with Subaru, the 86 debuted in 2012. New for 2020 is the “Hakone Edition.” Named after the Hakone Turnpike, which is one of Japan’s most famous driving roads, the new edition adds special Hakone Green paint, 17-inch twisted spoke bronze wheels, a black rear spoiler, black Alcantara seats, and a special logo embroidered on the dashboard. Like the standard car, the Hakone Edition is available with either a 6-speed manual or an automatic transmission with steering wheel-mounted paddle shifters.

All versions of the Toyota 86, including the Hakone Edition, get the familiar 2.0-liter naturally aspirated flat four that makes 205 horsepower and 156 pound-feet of torque. When paired to the automatic transmission, this figure drops to 200 hp and 151 lb-ft. The EPA rates the 86 at 21 mpg city, 28 highway, and 24 combined with the manual or 24, 32, and 27 with the automatic.

Trims for the 86 include the base, GT, the TRD Special Edition, and the Hakone Edition. The base trim gets well-bolstered cloth front seats, while the available GT trim covers them in synthetic suede. The TRD Special Edition gets 18-inch alloy wheels, a performance exhaust, and Brembo brakes. The Hakone Edition comes standard with LED fog lights, dual-zone climate control, heated seats, and push-button start. All trims get a 7.0-inch touchscreen display, an 8-speaker stereo, HD Radio, and Bluetooth connectivity. Safety features include a reversing camera, hill-start assist, and a tire-pressure-monitoring system.

The 86 is made with driving fun and practicality in mind, rather than all-out speed. Compare that to the Supra, which offers a straight-six instead of a flat-four and two seats instead of four. While small rear-drive performance cars are few and far between, buyers could also consider the Subaru BRZ and the Mazda Miata RF.

Enter your zip to see incentives for a new 86 in your area.