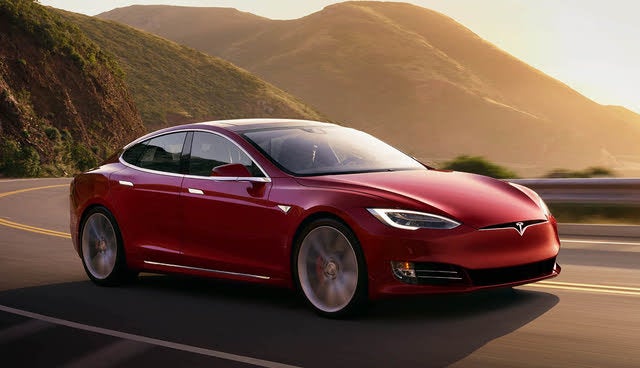 Tesla’s groundbreaking all-electric sedan is now in its eighth model year, and it remains at the cutting edge of electric vehicles when it comes to range and performance. Though its body and interior no longer project a “future is here” vibe, they’re certainly not dated. And as sedans go, the Model S will easily fill the void left by most any gasoline-powered luxury sedan, provided the owner is willing to submit to the limitations of electric charging.

Several trims are available: The Performance variant offers an EPA-estimated 348 miles of range and a claimed zero-to-60 time of 2.4 seconds, while the Long Range model ups range to 390 miles, according to Tesla. That model requires an estimated 3.7 seconds to hit 60 mph, however. Though it’s not listed on Tesla’s website, the EPA says Tesla is offering a Standard Range Model S with 287 miles of range. Expect between 97 and 111 MPGe combined depending on the trim and wheel size. Tesla says its superchargers can replenish up to 130 miles of range in 15 minutes, but that rate slows considerably to 44 miles of range per hour using Tesla’s home charger. Charge status and time remaining can be monitored using the Tesla smartphone app.

Inside the Model S looks modern, even if it’s not as edgy as it was when it debuted. The 17-inch vertically oriented touchscreen all but eliminates the need for dedicated buttons. But in Tesla’s quest for modernity it eliminated the “Start” button, which some drivers might miss initially. Heated front and rear seats, a heated steering wheel, and a glass roof are standard.

But the Model S’s key technology is its Autopilot driver-assist feature, which Tesla claims will handle automated driving on freeways between on- and off-ramps. All Teslas come with the hardware for full self-driving capability on surface streets, according to Tesla, but enabling it is a $7,000 option. Expect the system to be subject to both hardware limitations and good judgment.

Being a designed-from-the-ground-up electric vehicle gives the Model S distinct advantages over other vehicles in several areas. All of the Model S’s batteries are housed in the floor, which yields a low center of gravity that helps combat the weight they add over an equivalent gas-powered sedan. Packaging, too, benefits from the Model’s S’s smart design. It has ample cargo room (28 cubic feet) plus a large front trunk. The Model S’s second-row seats fold flat, but Tesla has done away with the rear-facing third-row jump seat.

This year the Model S finally has real competition from the Porsche Taycan sedan, which offers similar performance though with slightly less range and at a significantly higher cost.

Have you driven a 2020 Tesla Model S?
Rank This Car

If A Seller Has Not Responded To My Messages, How Can I Get A Hold Of Him?

Some Said I Shouldnt Sand My Tires?

someone said I should sand my tires down, you should right? , it's like seeing your reflection in metal that's how you know its clean