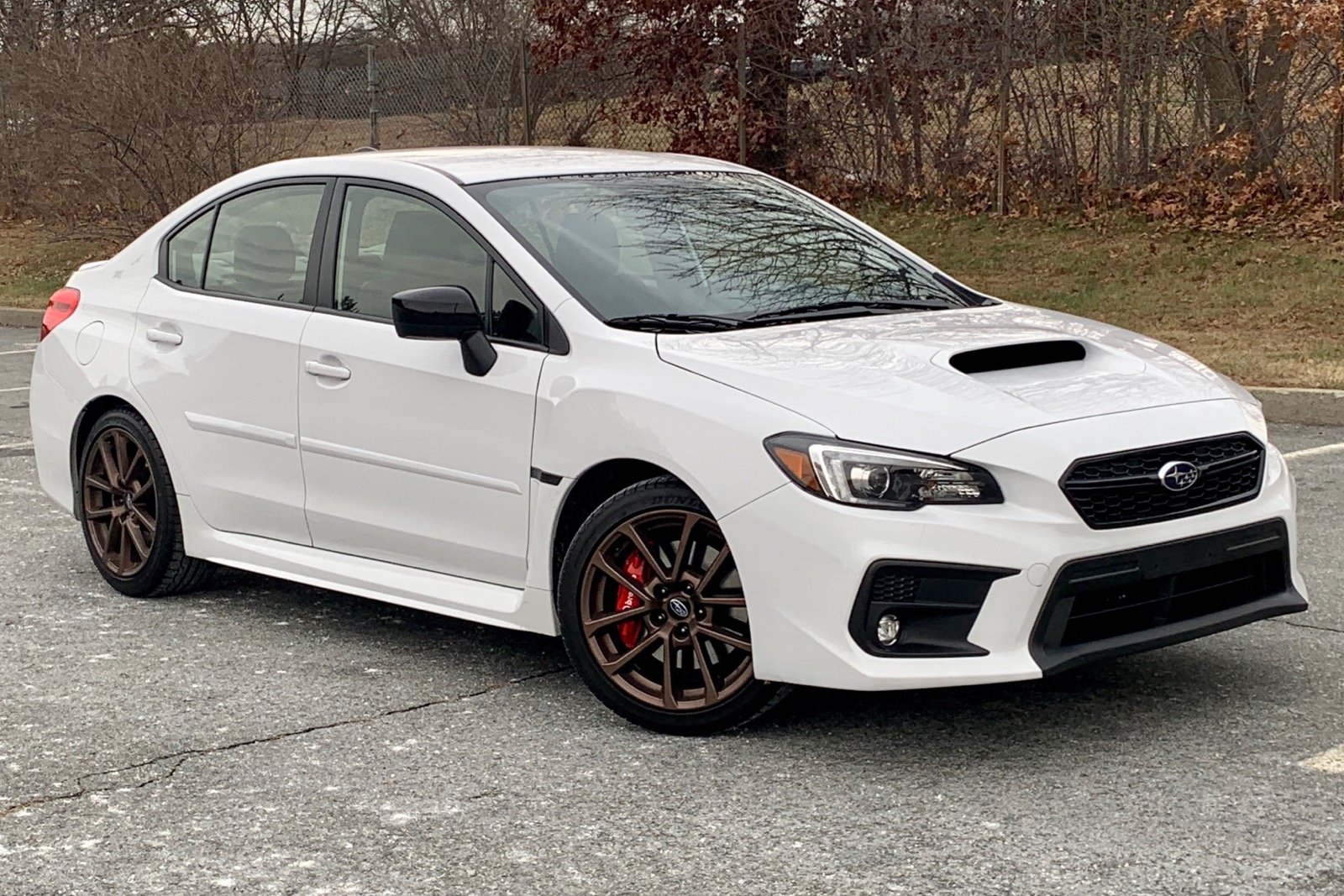 For many, Subaru is synonymous with camping, skiing, and dog lovers. This active, outdoorsy reputation is one that Subaru has carefully cultivated through the years. But there is another side to the brand and one that is just as critical to its success. Its performance and motorsports efforts helped develop the symmetrical all-wheel-drive system found in nearly every modern Subaru. The 2020 Subaru WRX is the road-going manifestation of decades in world rally racing.

The WRX is a home-grown celebration of all the technologies that underpin the lineup of reliable, efficient Subaru wagons, sedans, hatchbacks, and SUVs. But in the WRX these chassis and powertrain innovations are distilled to their hard-driving extremes. Can a four-door, four-cylinder car be a halo car for a brand? When that brand is Subaru, the answer is “yes.” 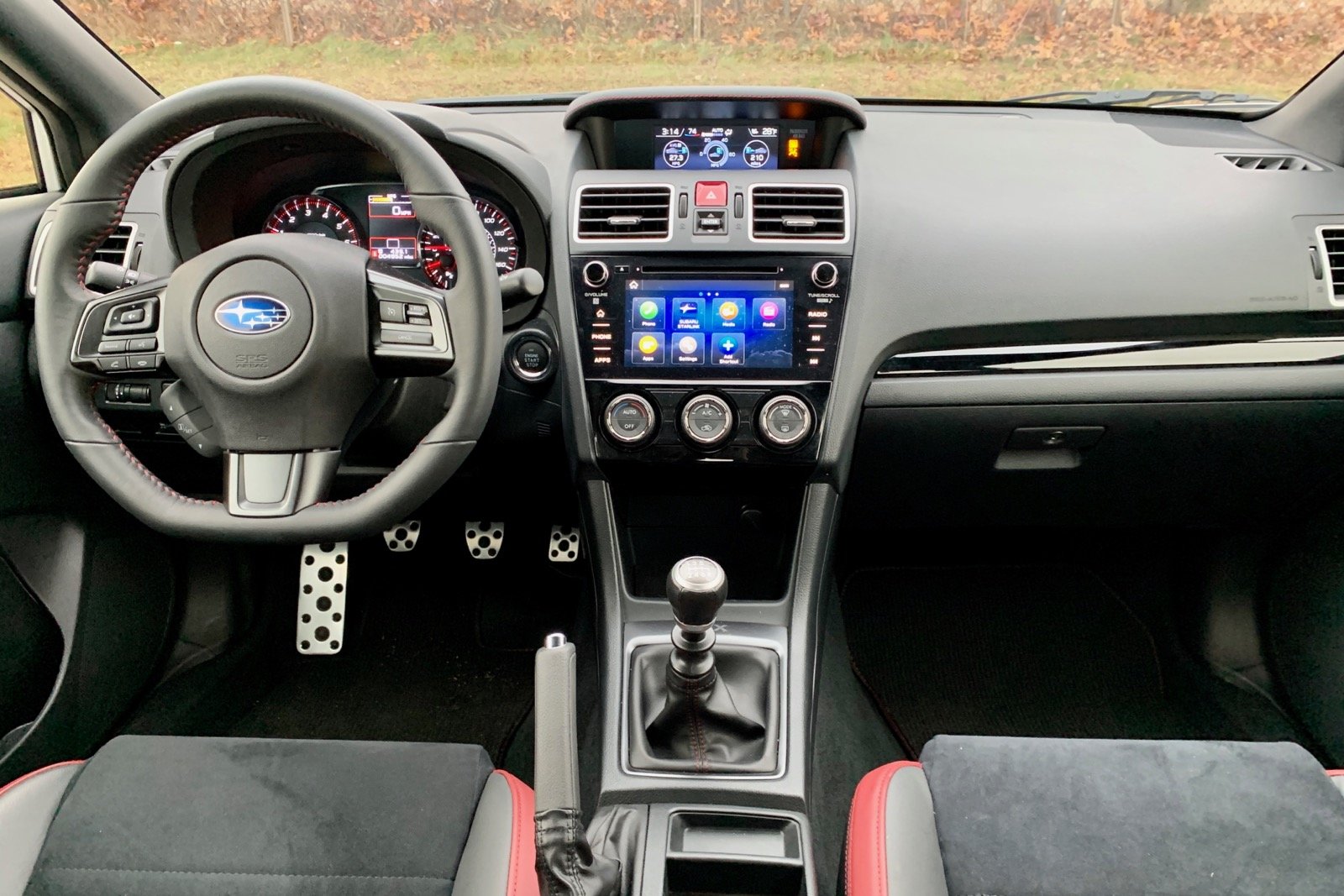 The WRX was first introduced in the early 2000s as a performance variant of the Subaru Impreza compact car. For the 2015 model year, Subaru split off the WRX as its own unique model, which is carried over to today. In 2019, the WRX received some infotainment updates, which are carried to the 2020 model seen here.

Though now a separate model, comparisons can still be made to the Impreza sedan. The WRX has a wider stance, a lower front splitter, a rear deck spoiler, and even a large functional air intake. The STI takes it further with a large rear wing and added aerodynamic components. These all make the WRX the most aggressively-styled vehicle in the lineup, but still readily identifiable as a Subaru. And despite these racy touches, the non-STI version can be something of a sleeper. Those that know what a WRX is all about will know what it’s packing under the hood, but others will be surprised by its performance. Those that don't may find the cabin styling to be a little pedestrian for a new car in 2021.

Trim levels for the WRX are Base, Premium, and Limited. The Base trim comes equipped with 17-inch alloy wheels, automatic climate control, and power front-and-rear windows. It also comes with Bluetooth connectivity, satellite radio, two USB ports, and a 6.5-inch touchscreen infotainment system with Apple CarPlay and Android Auto. 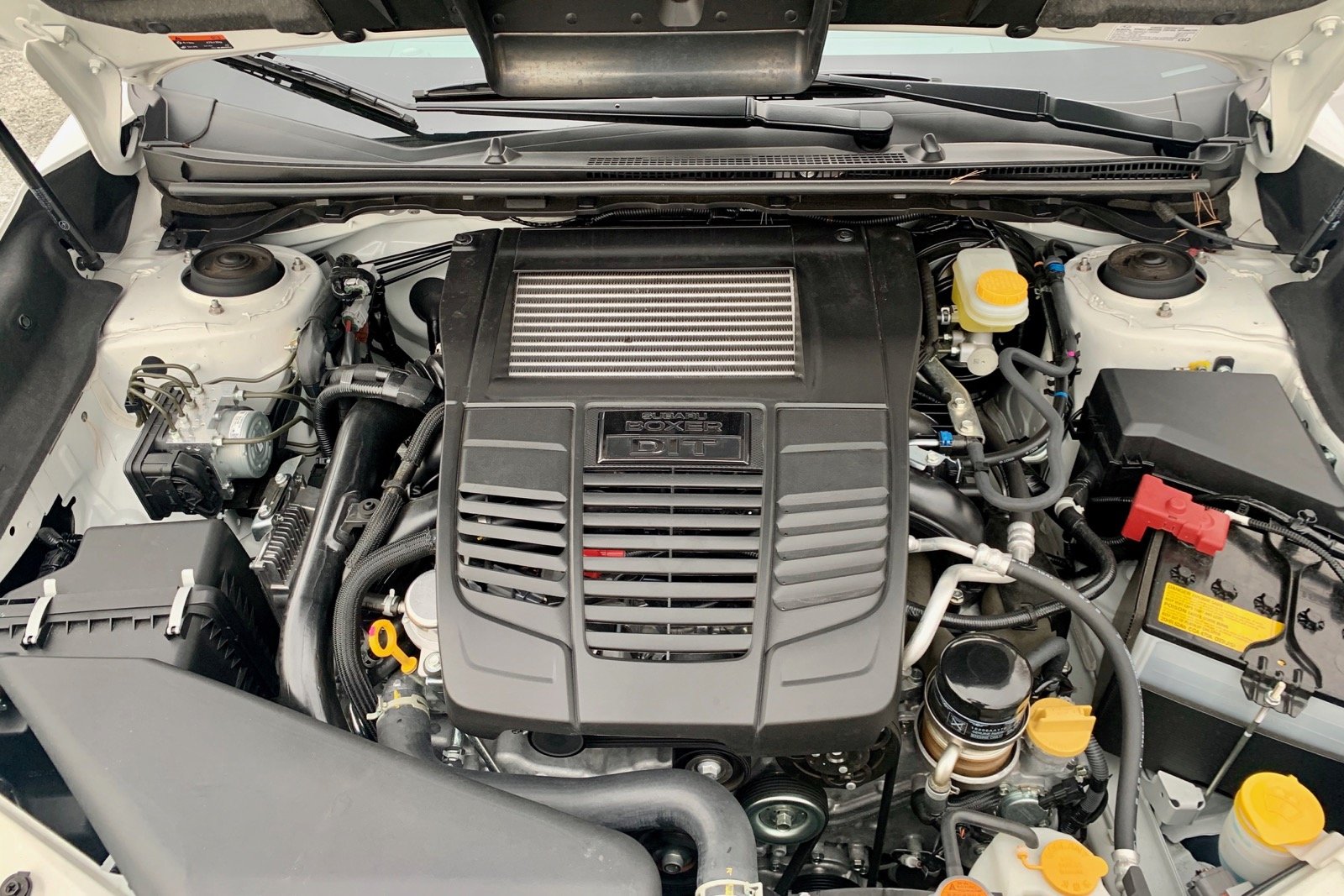 The WRX comes equipped with a turbocharged and intercooled 2.0-liter boxer-four engine. It makes 268 horsepower and 258 pound-feet of torque. Power is sent to symmetrical all-wheel drive through a standard six-speed manual transmission. This engine can also be paired to a continuously variable transmission (CVT). Though CVTs are typically associated with efficiency over performance, this version features Subaru’s SI-DRIVE with multiple drive modes. It also has paddle shifters with six-speed and eight-speed manual-shift modes. These are simulated gears, which doesn’t sound like an ideal scenario for a performance driving experience. However, we’ve used similar paddle shifters on the CVT in the Subaru Outback, and it does a good job of replicating actual ratios.

The AWD systems are also slightly different based on transmission selection. The manual routes power to a continuous all-wheel-drive system with a viscous-coupling locking center differential. It will transfer torque to the wheels with the best traction, but in normal driving, has a 50:50 front:rear torque distribution. The CVT is paired to a planetary gear setup with an electronically-controlled hydraulic transfer clutch. It will also transfer torque to the wheels that need it and has a 45:55 front:rear torque-split ratio. The viscous coupler in the manual setup will need the fluid to warm up before it can accurately transfer power. The electronic setup in the CVT system will respond more quickly, hence the rear-wheel-drive bias that it can correct more quickly.

In this sense, the CVT system is more responsive, but for our money, we’ll always take the manual with this car. A manual transmission is why you buy a car like this. The six-speed shifter feels great. The feedback is precise while not feeling overly mechanical or rough. The clutch pedal is surprisingly smooth. You can feel the exact catch point, but it is forgiving enough that you can drive the WRX like a normal commuter car if desired.

No matter which transmission you select, the power delivery is fantastic. Turbo lag is minimal, and with the manual, you get pushed back into your seat as you hold a gear longer and let the revs climb. The WRX shows that you can have more fun in a car with 250-to-300 hp than something more powerful—as long as it can corner. And corner, it does. The steering is precise and there’s no body lean. If you have winding back roads near your house, you’ll be on them every Sunday morning in a car like this.

The WRX STI is an even more hardcore version of the WRX. It features a 2.5-liter turbocharged boxer-four engine, putting out 310 hp and 290 lb-ft of torque. It also features Brembo brakes and a stiffer suspension. Together, they make the STI even more laser-sharp in corners.

The downside of that taut handling is the rough ride. It’s stiff in the WRX, and even more so in the STI. That is to be expected in a car like this, but going over often-imperfect New England back roads can be jarring. This is especially true when the tires are still cold. Taking to the highway isn’t much better, as there is a lot of road and wind noise. Plenty of WRX loyalists are more than happy to endure these things for the car's corner-carving abilities. But if you are new to the car, be aware of what daily driving will feel like behind the wheel. 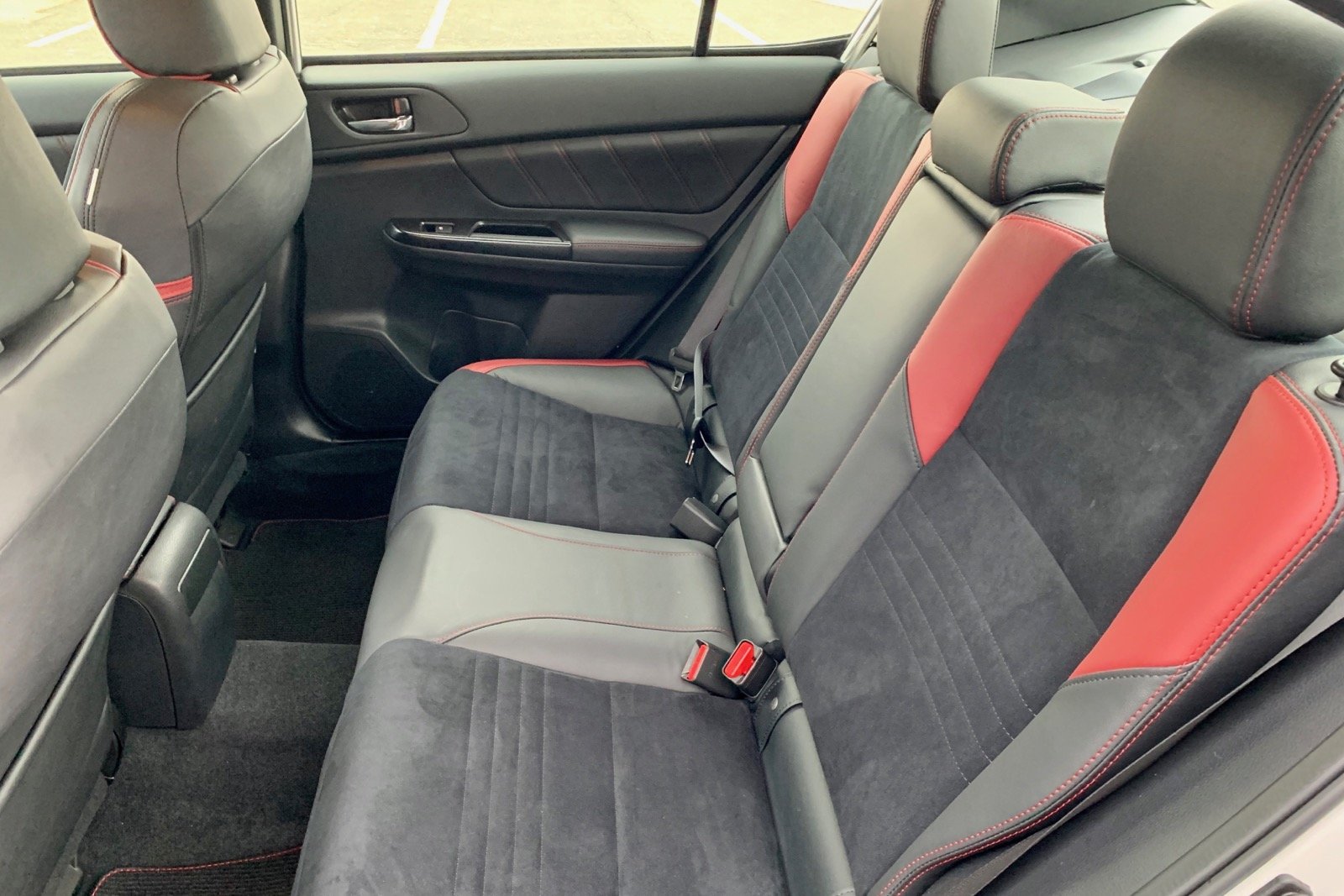 The WRX’s simple sedan layout makes for terrific sightlines. Rear and side visibility are as good as you’ll find in any performance vehicle. This is especially true considering many modern sports cars have thick C-pillars that create huge blind spots. Up front, the large windshield, slanted hood, and little quarter windows in the front doors ensure terrific forward visibility.

All of these positive visibility attributes stem from Subaru’s function-first designs. That practicality extends to the cabin, where a simple, straightforward dash layout provides easy-to-use controls and plenty of storage cubbies and compartments.

The WRX has plenty of first-row seating space with ample head- and legroom. Surprisingly for a compact car, rear-seat space is adequate for a full-size adult on most trips, though it might not be an ideal space for a road trip.

The WRX’s 12 cubic feet of cargo space is low compared to other compact sedans. But it’s best to compare it to other cars with similar performance. In that sense, the cargo space provided is similar to that of sports cars. 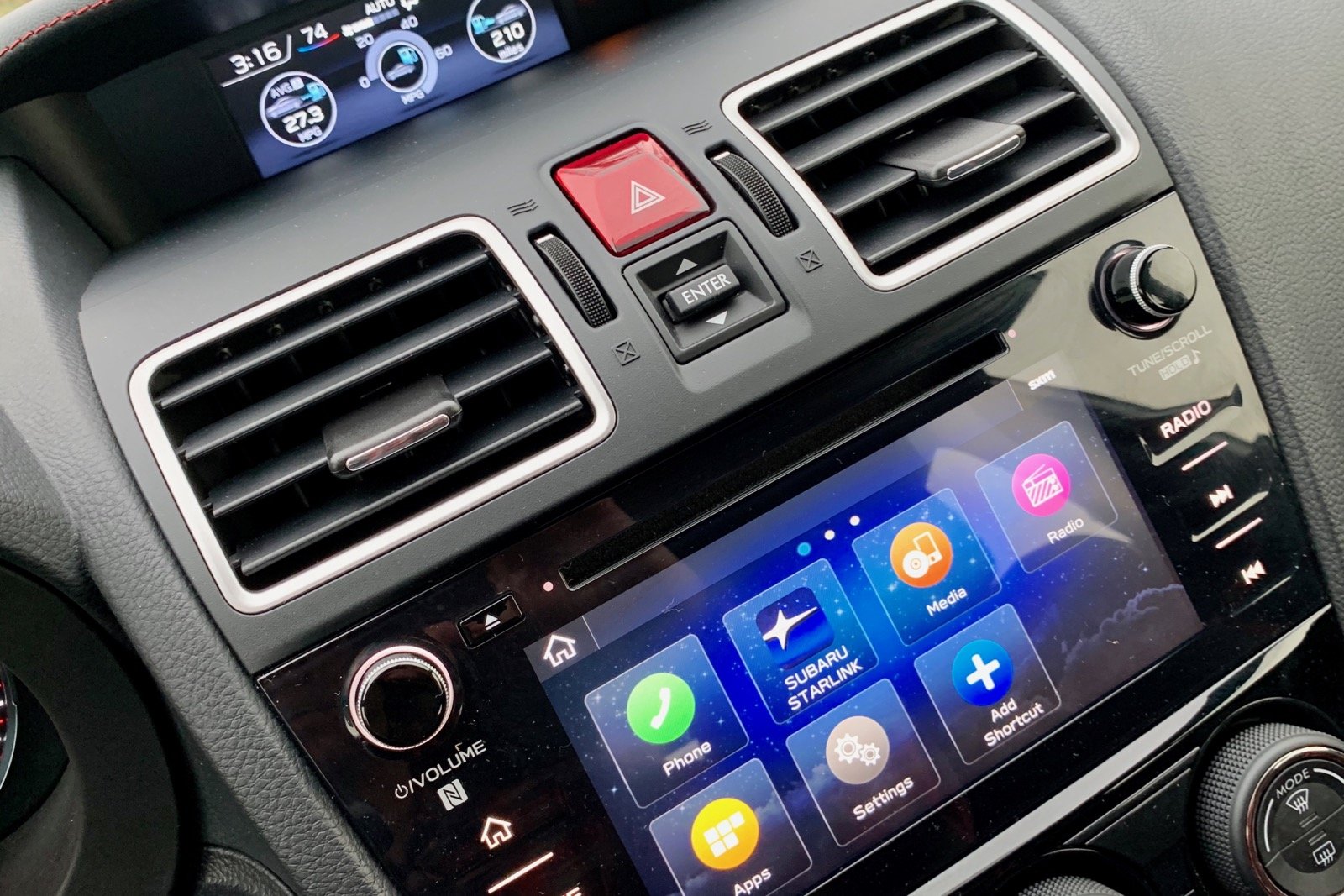 As mentioned, the WRX comes standard with a 6.5-inch infotainment touchscreen and is available with a 7-inch touchscreen. With either screen, the Starlink infotainment system is easy to use and comes with Apple CarPlay and Android Auto. It’s easy enough to navigate to and from a CarPlay menu to a native Subaru menu, and the tech never gets in the way.

Other Subaru models have newer infotainment systems, but we’ll gladly take this system. It has everything we’re looking for from a tech standpoint but doesn’t overdo it. Check out the new massive infotainment screen in the new Outback and you’ll know what we’re talking about.

The WRX also has a digital display in the instrument panel, as well as the digital information screen atop the dash. The latter is another element found in most new Subarus, and it is helpful to have key driver information in more than one place. 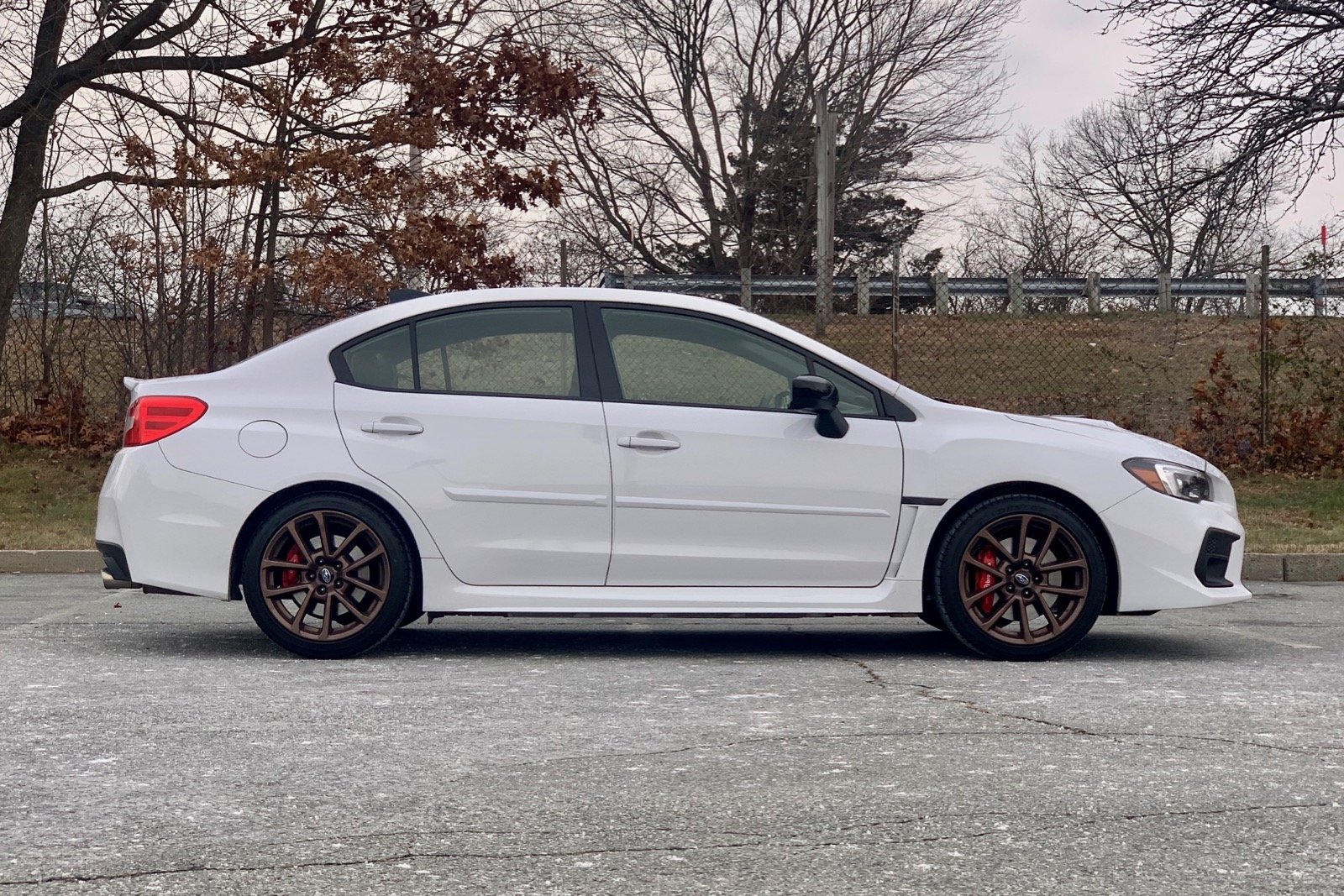 The WRX comes standard with a full array of front- and side-impact airbags, traction control, and a tire-pressure monitoring system. It is available with the EyeSight suite of driver-assistance features. This includes forward-collision warning, automatic emergency braking, lane-departure warning, automatic high beams, and adaptive cruise control. Where EyeSight is optional on the WRX, the safety suite is standard on most of the other new Subaru models. Other optional safety features include blind-spot monitoring, rear cross-traffic alert, and reverse automatic emergency braking.

The Subaru WRX earns top marks in testing by the Insurance Institute for Highway Safety (IIHS) and is even a 2020 IIHS Top Safety Pick. The WRX also earned a five-star overall safety rating from the National Highway Traffic Safety Administration (NHTSA). 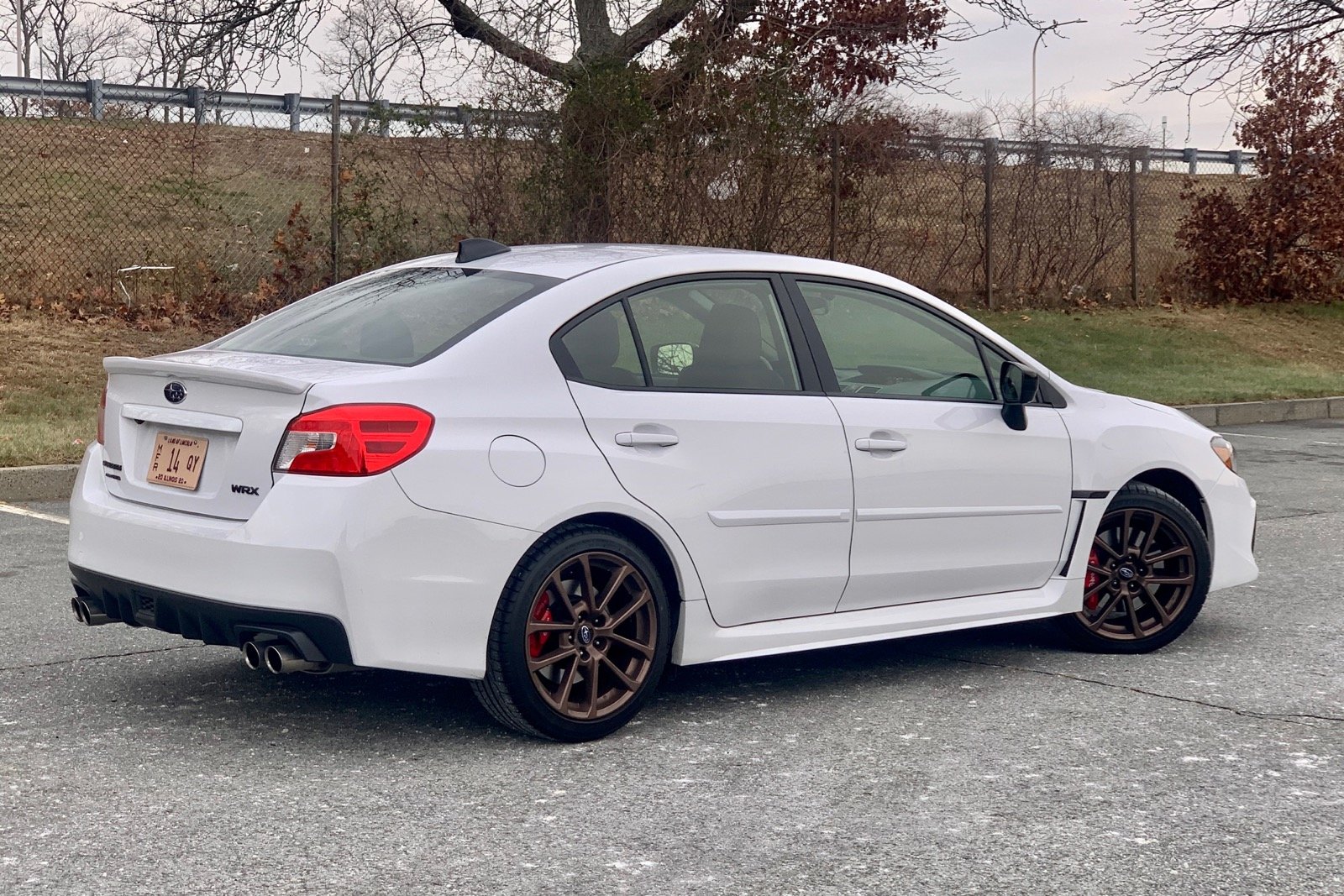 To get performance like that found in the WRX, you typically have to spring for more expensive cars. These are often luxury cars, which are racing towards the future so fast they forget what makes them special. The BMW M3, for example, is a far cry from its performance roots. A new WRX is expected to debut for the 2022 model year, and every indication is that it’ll still be offered with a manual transmission.

That should tell you what Subaru’s priorities are. It’s not about the lap times or the fact a paddle-shift transmission makes gear changes fractions of a second quicker. It’s about the drive. It’s about the way a small, lightweight car feels when you work through the gears, make perfect shifts, and let the turbocharging do its thing. It’s about executing that perfect downshift and dispatching a sharp corner in the road. Someday, these activities may be replaced with automation, but for now, we can appreciate the fact that a car like the WRX exists.

Have you driven a 2020 Subaru WRX?
Rank This Car