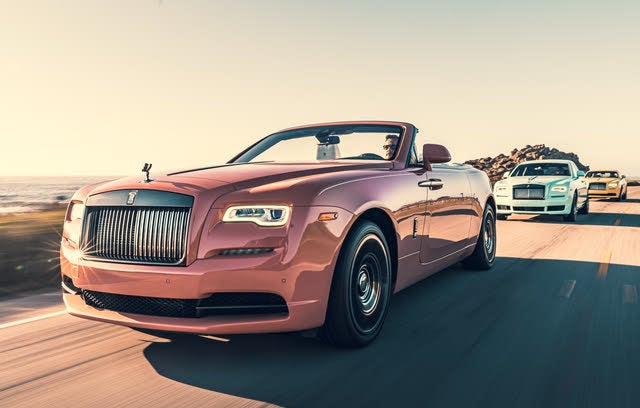 Introduced in 2009, the Ghost ranks below the flagship Phantom in Rolls-Royce’s lineup and is an older design, but it's still highly exclusive and very stylish. A new version of the Ghost is not far off, so for 2020 things remain largely the same since the model got a facelift in 2014.

The Ghost is a very large car, tipping the scales at about 5,500 pounds, but it has ample power the engine delivers smoothly for brisk but not alarming acceleration. Its 6.6-liter V12 gets two turbochargers to deliver 563 horsepower and 605 pound-feet of torque, driving the rear wheels via an 8-speed automatic transmission. That’s enough to get the Ghost to 60 miles per hour in 4.7 seconds and on to an electronically limited top speed of 155 mph. Huge car plus huge engine typically equals poor fuel economy, and the Rolls delivers an unsurprisingly low 12 mpg city, 18 highway, and 14 combined. Built on the same platform as the BMW 7 Series, the Rolls-Royce Ghost comes with a full air suspension system with variable damping control and active anti-roll features, all tuned more for comfort than hard cornering.

In typical Rolls-Royce fashion, the Ghost offers a huge range of options and personal touches that are limited only by the buyer’s imagination and budget. The choices of different veneers, stitching, metallic trim, and upholstery colors mean that no two Ghosts are likely to look exactly alike. But while the Ghost has an air of old-school English luxury, much of the tech in the Ghost comes from parent company BMW. Backseat passengers get soft leather seats and plenty of legroom, and the rear suicide doors allow for easy access. For even more comfort, though, dual 9.2-inch displays and a phone system are available in back, and a special extended-wheelbase trim stretches the car by 6.7 inches.

The Ghost won’t go through the usual run of crash testing, and neither will other cars in Rolls-Royce’s exclusively high-priced model range. To prevent having a crash in the first place, though, the Ghost has active features like a head-up display, high-beam headlight assist, night vision, adaptive cruise control, and lane-departure warning.

Choices are limited this high in the price spectrum for luxury sedans, but they aren’t nonexistent. While the Rolls-Royce badge has a certain cachet and the Ghost’s appointments are superb, buyers might also be drawn to the Mercedes-Maybach line, the Aston Martin Rapide, or the Bentley Mulsanne. A new second-generation Rolls-Royce Ghost is likely to arrive in the near future.

What's your take on the 2020 Rolls-Royce Ghost?

Have you driven a 2020 Rolls-Royce Ghost?
Rank This Car