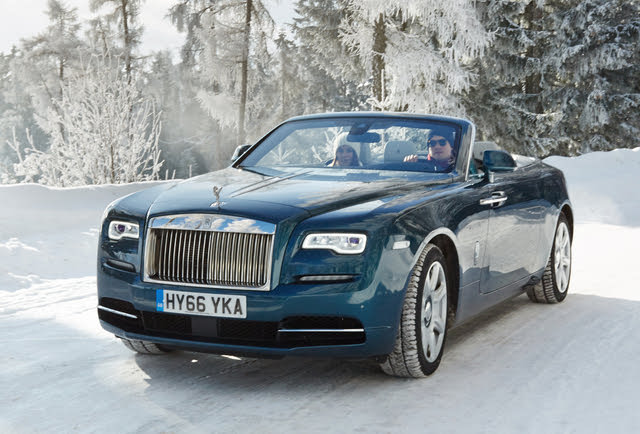 The Dawn is the sumptuous two-door convertible introduced by Rolls-Royce in 2015. Built by hand and based on the 7 Series platform from Rolls-Royce’s parent company, BMW, the Dawn is stylish, distinct, and extremely expensive. For 2020, Rolls-Royce introduces another one of the company’s special limited-production models. The latest is called the Dawn Silver Bullet Collection, which according to Rolls-Royce is an “ode to decadence, to frivolity, to heady heydays and irreverent past times,” namely the Roaring Twenties that began 100 years ago. Limited to 50 examples worldwide, the Dawn Silver Bullet features special ultra-metallic paint, a special cowling behind the front seats to give the appearance of a two-seater, dark exterior highlights, partly polished wheels, open-pore carbon fiber interior fascia, and a quilted transmission tunnel inspired by stylish leather jackets. Otherwise, the rest of the Dawn lineup remains unchanged.

Under the Dawn’s massive rectangular hood is a 6.6-liter twin-turbocharged V12 engine good for 563 horsepower and 605 pound-feet of torque directed to the rear wheels via an 8-speed automatic transmission. A self-adjusting suspension makes for a smooth ride. Rolls-Royce buyers don’t often factor fuel economy into their buying decisions, but the EPA estimates the Dawn will return an unremarkable 12 mpg city, 18 highway, and 14 combined.

The Dawn’s roof opens in 20 seconds to reveal a lavish interior that goes a long way in justifying the Dawn’s exorbitant price tag. Various types and colors of leather are available, while the choice of stitching, wood trim, metallic trim, and other special features means a very high level of exclusivity. No two Dawns are likely to look exactly the same. Infotainment is centered on a 10.3-inch screen in the middle of the dash and includes navigation. The underside of the Dawn’s retractable roof also features Rolls-Royce’s signature “Starlight Headliner,” which features over 1,300 fiber-optic lights to mimic the night sky.

The Rolls-Royce Dawn is far too expensive to ever get crash-tested by either the National Highway Traffic Safety Administration (NHTSA) or the Insurance Institute for Highway Safety (IIHS), but standard safety features include lane-departure warning, night vision, a head-up display (HUD), adaptive cruise control, and adaptive headlights.

The Dawn is both distinctive and exclusive, but it is not without its rivals. Shoppers might also be tempted by the Ferrari Portofino, Bentley Continental GT Convertible, or open-top versions of the Mercedes-Benz S-Class. The latest Silver Bullet Collection spices things up with a sportier and even more distinctive look for the Dawn, so it is sad that its production run will be so limited.

Have you driven a 2020 Rolls-Royce Dawn?
Rank This Car