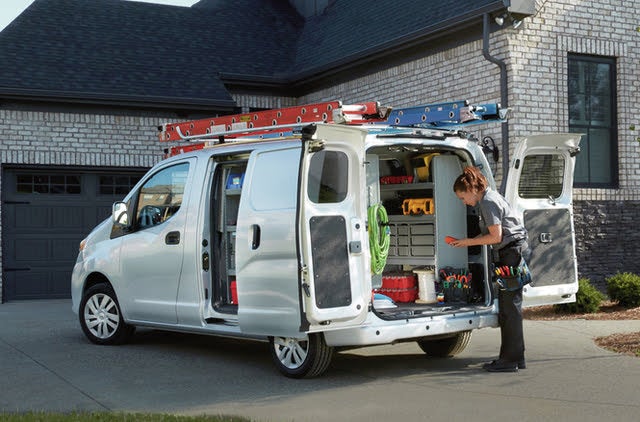 Looking for a New Nissan NV200 in your area?

The Nissan NV200 is a compact commercial van, similar to the Ford Transit Connect and Ram ProMaster City. It gets a number of enhancements for 2020.

Unlike its competitors, Nissan sells the NV200 only as a cargo van and does not provide a passenger version. That said, the NV200 offers plenty of utility behind its two front seats. The cargo area measures 82.8 inches long and 54.8 wide, and it’s even capable of hauling standard 40-by-48-inch plywood sheets between the rear wheels. All in, the NV200 can haul 122.7 cubic feet of cargo and 1,480 pounds of payload. Loading and unloading is also a cinch thanks to rear doors that swing open to either 90- or 180-degree positions.

Power for the NV200 comes from a 2.0-liter inline 4-cylinder engine rated at 131 horsepower and 139 pound-feet of torque. A continuously variable automatic transmission (CVT) drives the front wheels. The EPA estimates fuel economy at 24 mpg city, 26 highway, and 25 combined.

Nissan offers the NV200 in S and SV trims. The S comes with power windows, a 12-volt power outlet, a 6-way manual driver’s seat, USB, and Bluetooth. There’s a fresh 7-inch infotainment system for 2020, complete with Apple CarPlay and Android Auto. A body-colored front bumper, a set of 3 ceiling-mounted cargo lamps, and satellite radio are more new standard features. Cruise control can be added as a standalone feature.

The SV tacks on an extra 12-volt power outlet, heated power exterior mirrors, keyless entry, cruise control, a body-colored rear mirror, and six wall-mounted tie-down rings, to help you secure your cargo, as standard equipment. Nissan also gives you the option of glass on the sliding side door and/or the rear doors for both trims.

Because it’s a commercial vehicle, the NV200’s only safety feature of note is a set of rear parking sensors. A reversing camera isn’t available at any level. Also because of its commercial status, the NV200 has never been crash-tested by any major agency.

Enter your zip to see incentives for a new NV200 in your area.