An electric car that can comfortably travel 200 miles for less than 40 grand. 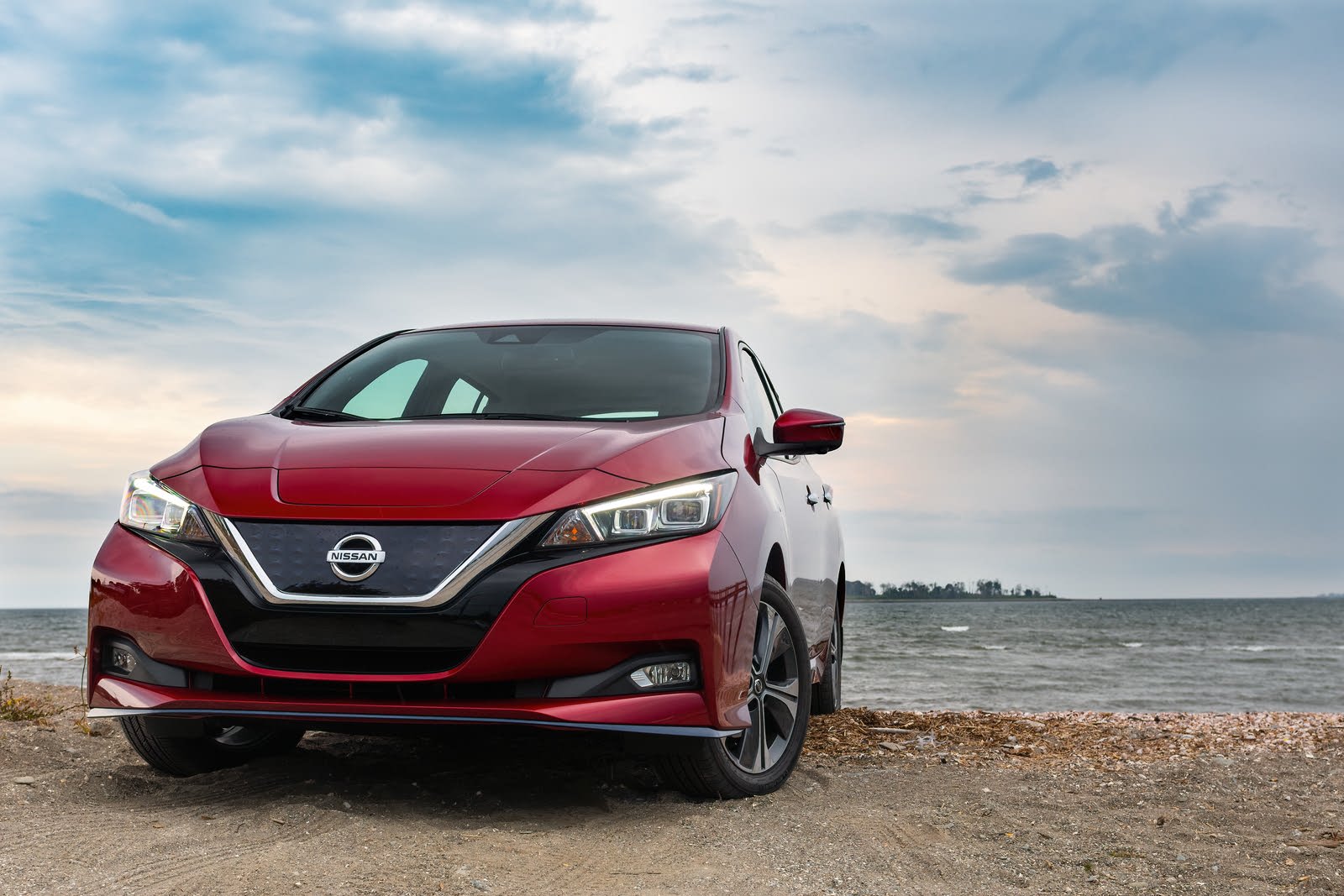 This is the car I wish Nissan made 10 years ago, when the first-generation Leaf almost stranded me on my way to work. Batteries have improved so much since 2010, they've made those early cars practically worthless on the used market. Case in point: with the second-generation Leaf, Nissan has added a new Plus model that claims up to 226 miles per charge, offers quicker acceleration, and includes more technology for every Leaf trim. It's enough to make the Leaf feel like a real car. 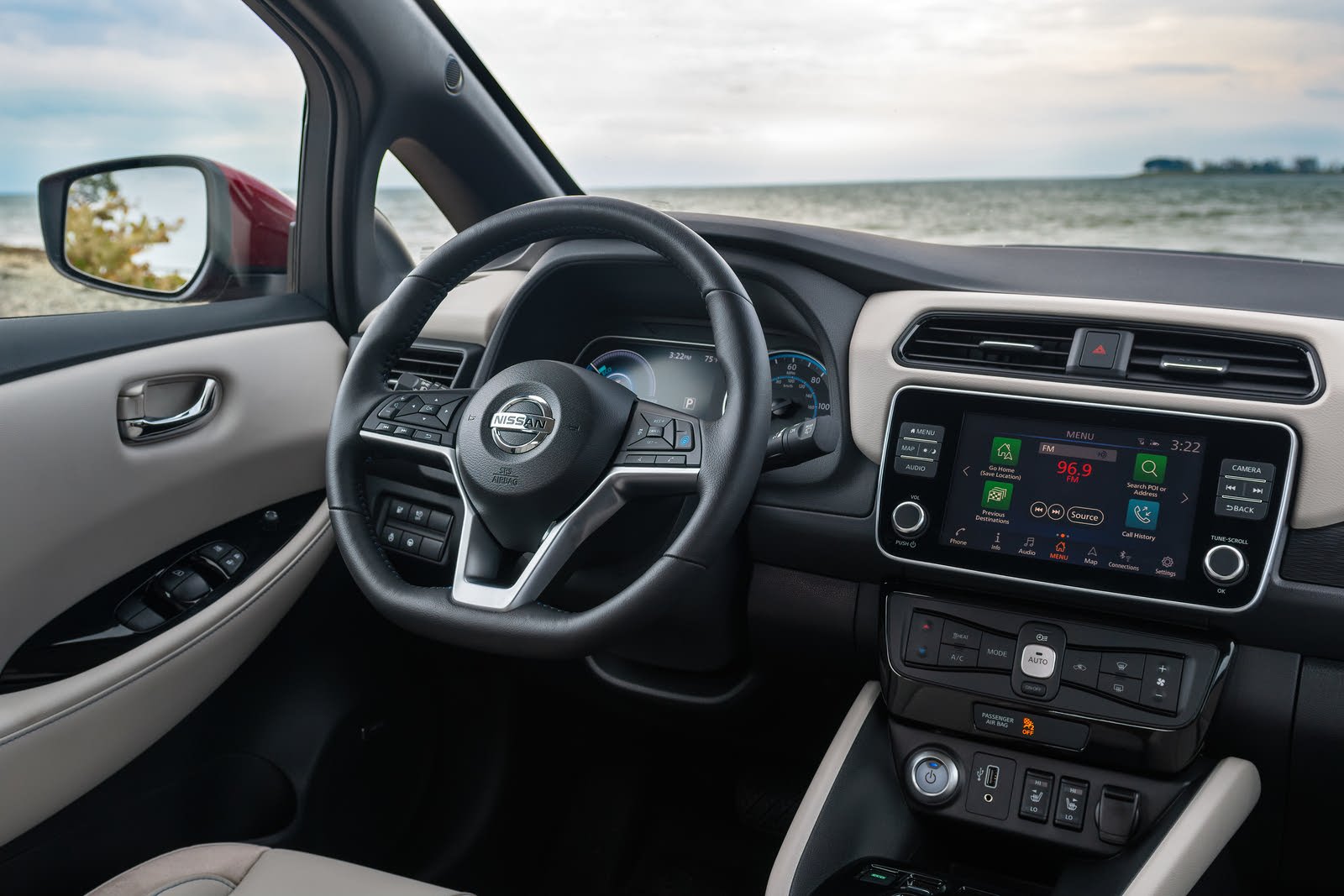 We've already tested the second-generation Leaf—which came out for 2018—and much preferred the new style. Part of the old car's mission was apparently looking weird as hell. That's not the case anymore. The current Leaf keeps the dimensions and proportions—like the long, raked windshield and pointed noise—but molds them into an edgier shape that matches the flashier, sportier skins of Nissan's conventional sedans and crossovers.

Nissan's V-shaped motif plays really well here. The solid black grille mixes bluish triangle accents that sparkle in the sunlight. That effect blends with the gloss-black trim sweeping underneath the grille to visually connect the slanted, multi-beam headlights (with sharp LED headlights and running lamps on my loaded SL Plus test car). The black D-pillars that wrap into the top half of the tailgate make the roof appear to "float" over the body, a little visual drama Nissan has perfected since the 2015 Murano. On Plus models, there are blue accents on the front chin spoiler and rear valence. All but the base S and S Plus trims have 17-inch alloy wheels (the former trims have 16s, with steel wheels on the S). It's a small car you can stand near and not feel repelled by a repugnant stench of lousy design. New for 2020 is a bright orange paint called Sunset Drift ChromaFlair.

I liked the old Leaf's interior, and not just because it prevented me from seeing the exterior. The latest Leaf modernizes it just enough while retaining some funky design flourishes (like the bow-tie-shaped climate controls, hockey puck shifter, and ovoid door pockets for the window switches). The beige and black treatment on my SL Plus was offset by polished black trim on the console and blue stitching on the leather and faux-suede seats. It looks and feels attractive and high-quality. The dash is normal. The flat-bottom steering wheel is sporty. The 8-inch touchscreen and digital instrument panel are straight out of other Nissan models. They look high-res and up to date. 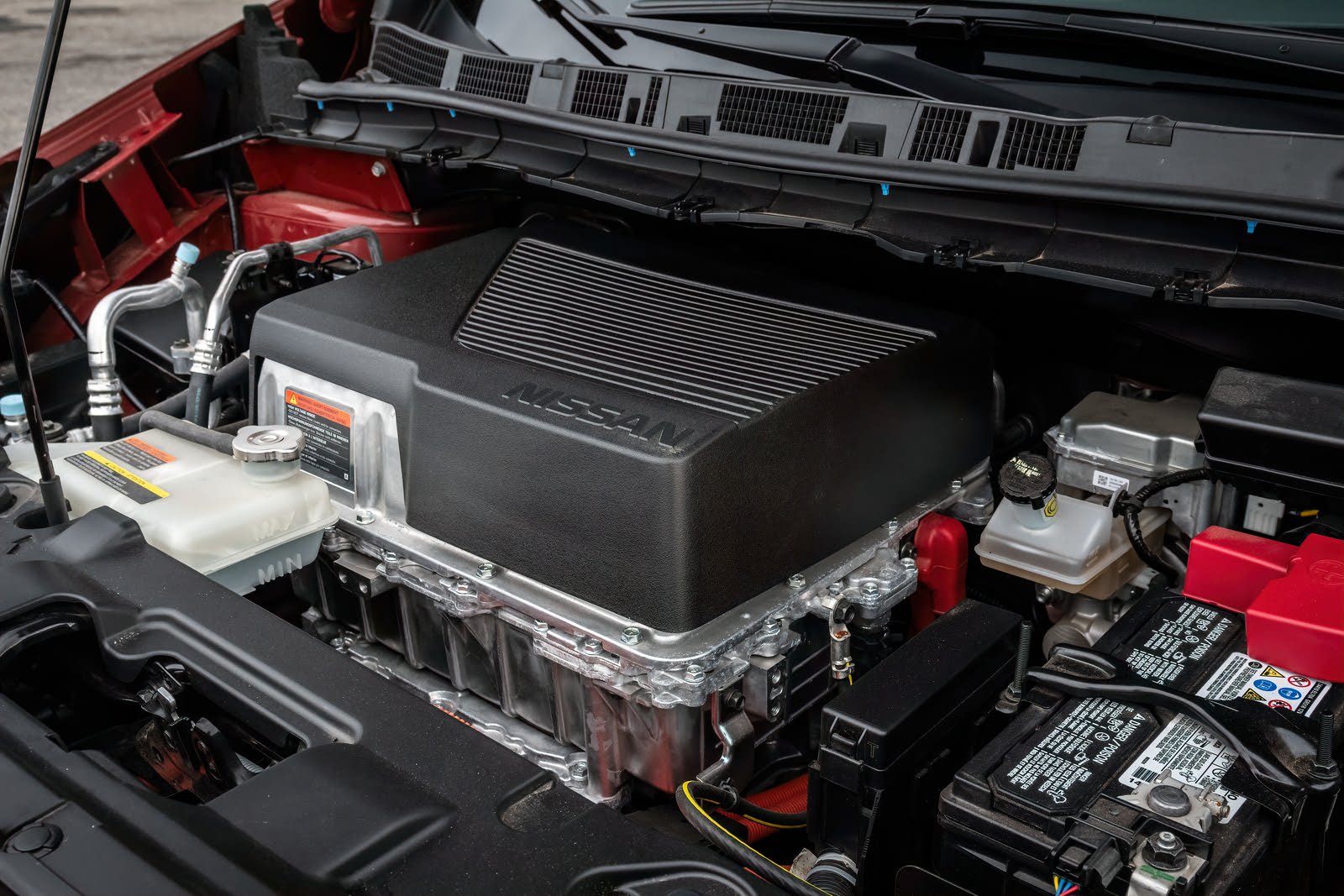 The Leaf comes with two powertrains. One serves people who never drive more than an hour a day, and the other is a security blanket for people who actually go places and would not like to have a nervous breakdown while they're getting there. For the stay-near-home folks, the base Leaf S and SV have a 40-kilowatt-hour lithium-ion battery with an EPA-estimated 149 miles of range. A single electric motor directly drives the front wheels with 147 horsepower and 236 pound-feet of torque. Is that OK? Yes, but 214 hp and 251 lb-ft are noticeably better in a heavy little machine like the Leaf. That's the setup in the Plus trims, which carry a much larger 62-kWh battery. A big asterisk: The S Plus is the only Leaf with the estimated 226-mile range. The cushier SV and SL Plus trims have larger wheels that reduce that to 215 miles.

But the estimates don't mean much until you figure out how to trust the car's range indicator. I enjoyed temperate 60-degree weather during my week with the car. After a full charge, I saw 223 miles on the display. Pressing the Eco button, which reduces acceleration and the effectiveness of electrical accessories like air conditioning gave me 236 miles without even moving the car. On another day, it read 242 miles. Later, after a 90-mile highway drive at constant 75-mph speeds with some hills thrown in, the indicator read 102 miles. That's a 50-mile deficit from when I started. And those are the kind of numbers you'll need to get used to seeing. Could I have gone the remaining 110 miles if I slowed way down? Maybe. But had I been driving on a brisk day in the low 40s with the heat on, probably not.

That's the thing about the Leaf, Plus or not. The range is wildly variable and depends entirely on your drive route, elevation, throttle inputs, and the shadow of Punxsutawney Phil. So really, there is no doubt the Leaf Plus is the Leaf to buy. The extra range isn't just noticeable, it's necessary.

Charging times are usable when you use the Leaf's 440-volt Level 3 port. It's standard on every trim except the base S, where it's an option. Nissan uses an aging Japanese standard called CHAdeMO, which 10 years ago was the fastest standard to charge an EV (before Tesla). Many U.S. stations output up to 50 kW, which is the max input for the 40-kWh Leaf. The Plus can handle up to 100 kW, which should theoretically charge it from 0 to 80 percent in 45 minutes. I timed two fast-charges while I was at the local Trader Joe's. Charging from about 22 percent to 85 percent took 45 minutes. But to take full advantage of the big battery, it takes another 45 minutes to reach that last 15 percent. This is not the Leaf's fault—it's how any battery must be charged to safely prevent it from overheating, damaging itself, and exploding. The solution is to fast-charge while you're out and top the rest off at home with a 240-volt charger (7.5 hours dead to full on the regular Leaf and 11.5 hours on the Plus).

The CHAdeMO plug is also alarmingly heavy and thick, like a fire hose. Older people or anyone with a disability may not be able to use it. The SAE CCS plug that American and German automakers use is much smaller and lighter. The Tesla Supercharger, even more so—and it's much faster.

So, the charging situation isn't any better or worse than any other conventional EV. But the driving experience is quite good. Acceleration can overwhelm those front tires, and I could feel the car restricting torque off the line until I reached about 20 mph—that's when it really surged. The Leaf is fun to drive because it's so quiet and can zip by unnoticed. The steering and handling are also impressive, thanks to the battery pack acting like a huge lead weight anchoring the center of gravity low in the chassis. Braking feels normal and not squishy like many regenerative systems. You can press the e-pedal switch for aggressive one-pedal driving, but I found deceleration too strong when lifting off the accelerator in one-pedal mode. There is no way to adjust the deceleration like in competitors.

Efficiency is EPA-rated at 123 MPGe (miles per gallon equivalent to one gallon of gasoline) in the city, 99 MPGe on the highway, and 111 MPGe combined for the standard battery. The larger battery in the Plus, obviously, consumes more power (118/97/108). The SV Plus and SL Plus are 114/94/104. The lower the numbers, the more the battery consumes, and the faster you'll deplete it. 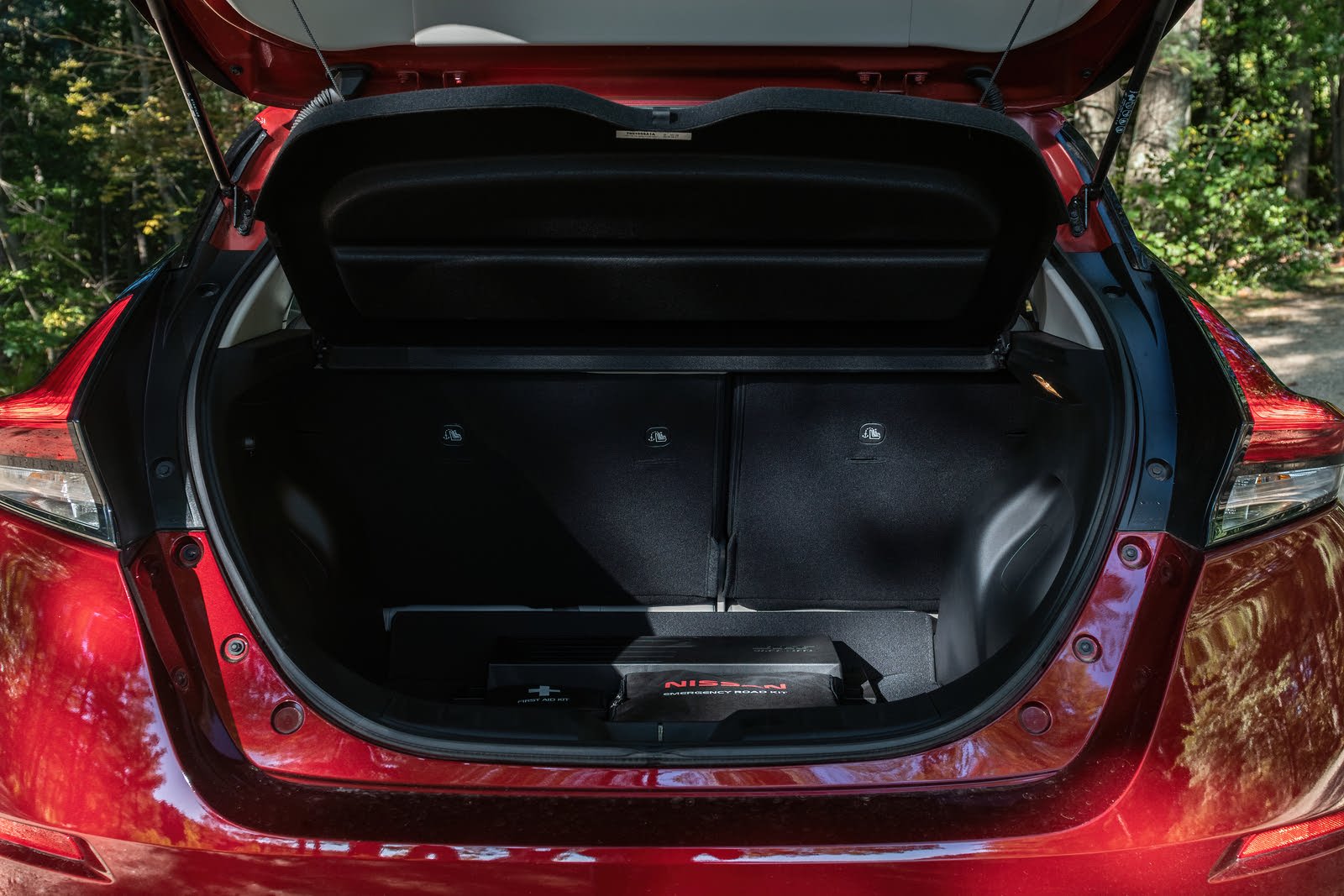 The shifter is the only confusing part of the Leaf's straightforward interior. It stays in one position and you have to move it up and to the left for reverse and down for drive, much like the stubby shifter in the Toyota Prius. Whatever. The instrument panel is half-digital, with an analog speedometer and a larger multi-function LCD that indicates how much throttle you're applying and how much regeneration the car's wheels send back to the battery. Else, every control is just like you'd find in a Rogue or Versa. Nissan has shortcut buttons outside the touchscreen, plus volume and seek knobs. More buttons on the steering wheel, toggle switches for the heated seats, and additional buttons above the driver's left knee are easy to spot and operate.

Visibility is great in all directions, even without the optional 360-degree cameras. Glass cutouts between the doors and A-pillars—a place some automakers fill with stereo speakers—are helpful. Headroom is very generous, and the cabin floor is remarkably low and unobtrusive considering the giant battery underneath. Cargo space, at 24 cubic feet behind the rear seats and 30 folded, is the same regardless of battery type. That's on the small side. But considering no one feels cramped inside the Leaf, it's a fine sacrifice. 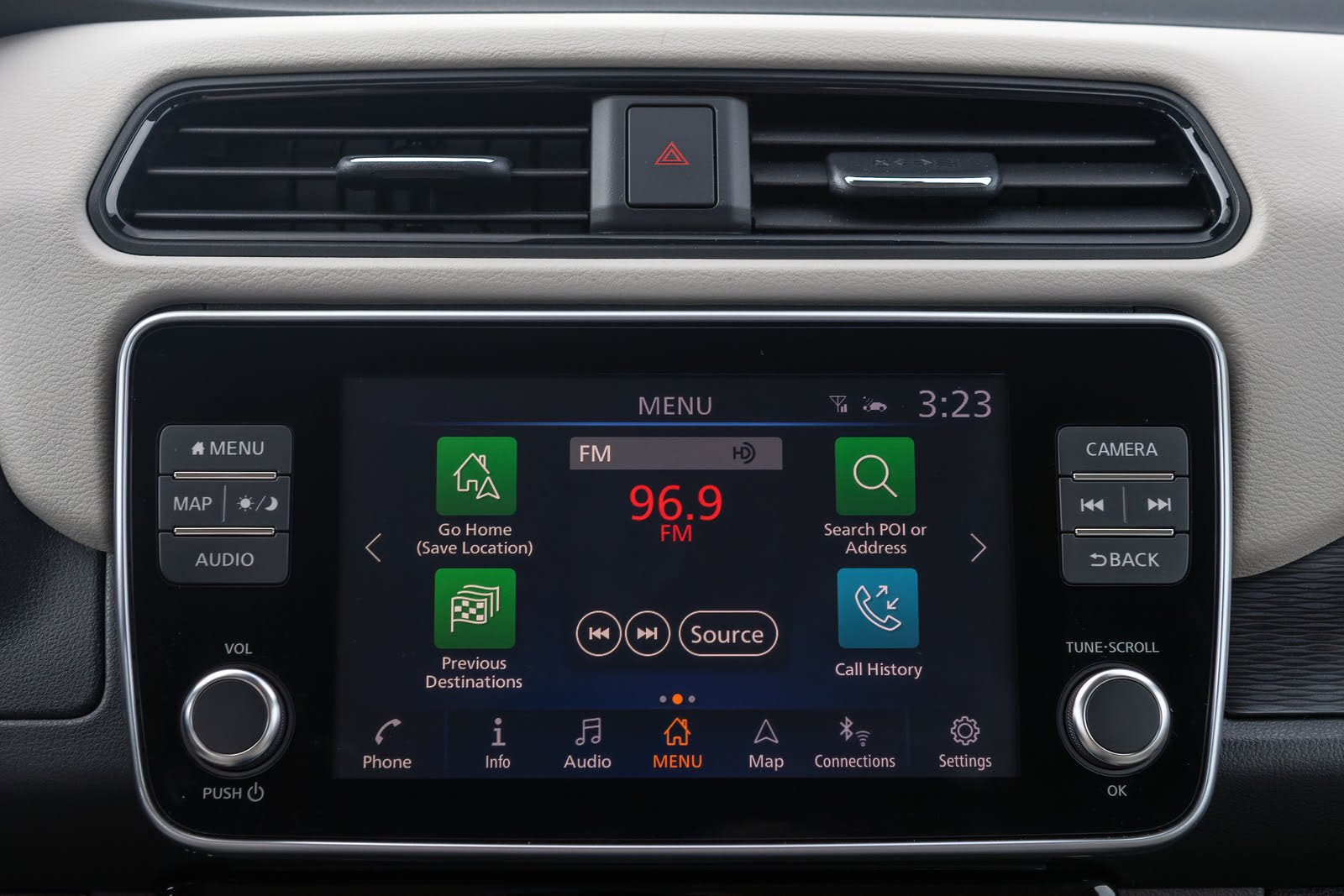 For 2020, all Leaf models come with the 8-inch touchscreen that used to be optional, plus Apple CarPlay and Android Auto. SV models bring factory navigation with NissanConnect services, which pairs with a smartphone app to activate the climate control, check the car's charging status and estimated range, and offer other remote services such as unlocking the doors. But the nav is really flawed. Input a destination further away than the car's estimated range, and it won't route you to any charging waypoints. The car's onboard list of public chargers doesn't specify the voltage or plug type. This is inexcusable. You'll have to rely on third-party apps like EVGo and Chargepoint to get the job done—and map out your route manually.

What redeems the Leaf—and it's available only on the most expensive SL Plus—is ProPilot Assist, which is a very good semi-automated driving system that can steer the car through curved multi-lane highways. This trim is also the only Leaf to offer a seven-speaker Bose stereo, heated steering wheel, LED headlights, eight-way power driver's seat, and an auto-dimming rearview mirror. The 360-degree cameras are standard on the SL Plus and now available as an option for the SV and SV Plus. 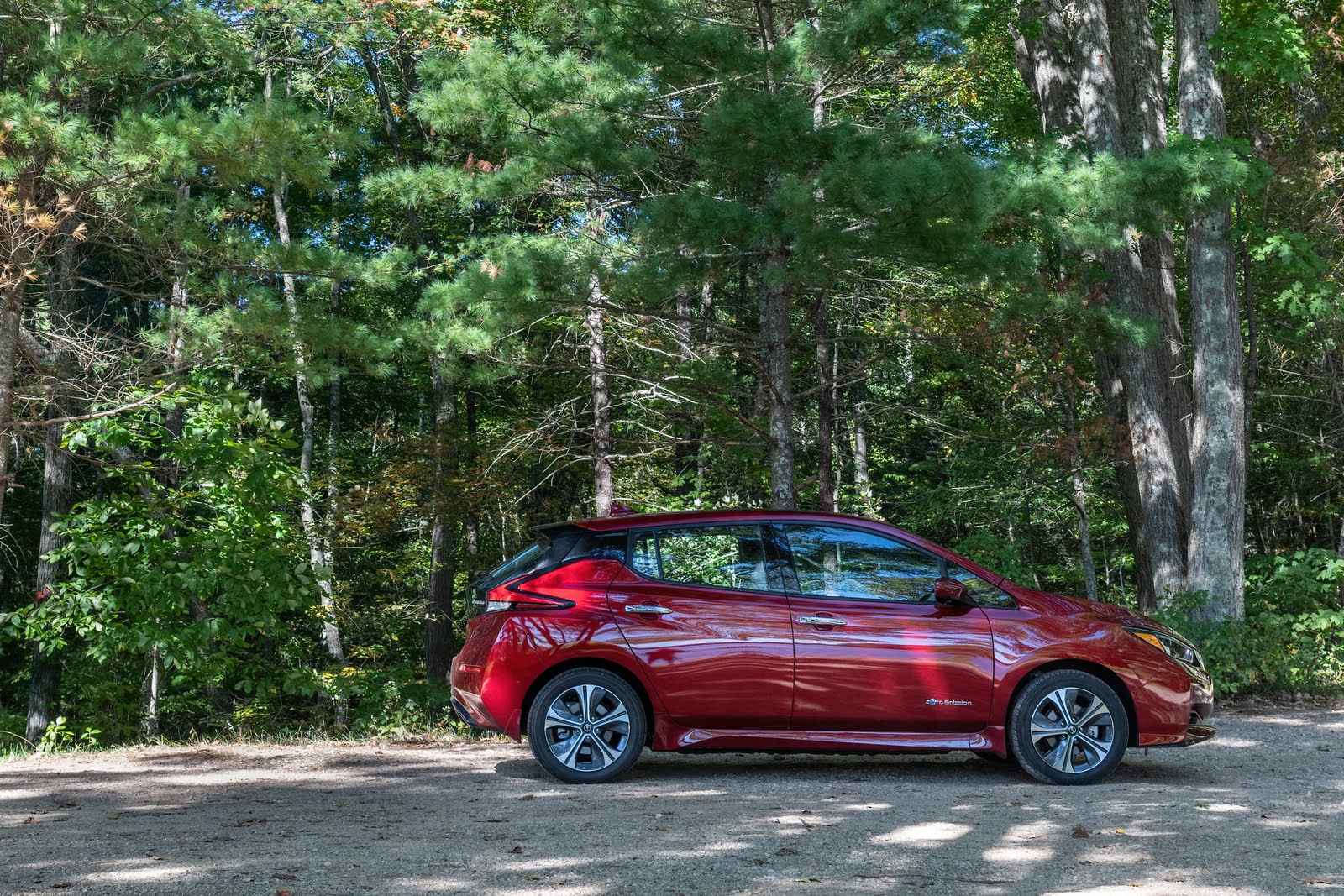 The 2020 model year brings several major additions to passive and active safety. There are four new airbags—one each for the knees of both driver and passenger, and a side thorax airbag for each outboard rear seat. The driving alert sound that warns pedestrians when the vehicle is traveling below 20 mph has a new tone and is louder, thanks to a second speaker under the front hood. Another beeping sound when the Leaf is in reverse also increases in volume. (These sounds will soon be mandated by federal law.) Forward emergency braking with pedestrian detection, rear emergency braking, lane-keep assist, blind-spot monitoring, rear cross-traffic alert, and auto high beams now come standard. Nissan claims its forward-collision warning can detect when a second car ahead slows down, instead of only the first car.

No Leaf in the current generation has been rated by the National Highway Traffic Safety Administration (NHTSA). The Insurance Institute for Highway Safety (IIHS) has only partially rated the 2018 Leaf, with the top Good ratings for the moderate front overlap, side, and head restraint/seat tests. Given the tests are incomplete, we can only predict the Leaf, now with more airbags, will be safer than past models. 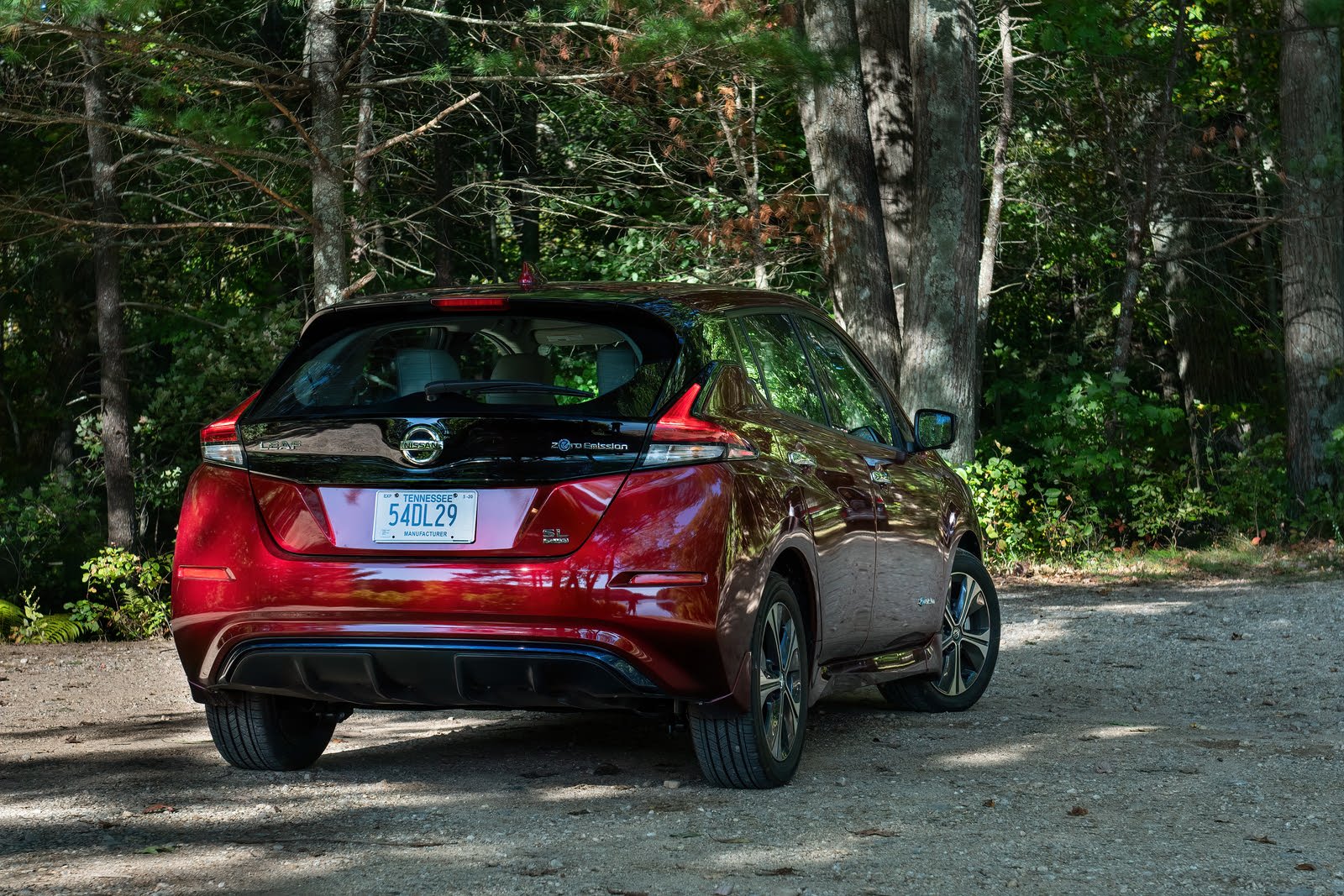 The 2020 Leaf starts at $31,600 for the S and goes up to $43,900 for the SL Plus. My test car, with destination and extra-charge red paint, was $45,220. That's the most you can spend and CarGurus doesn't recommend you do. Instead, get an S Plus for $38,200 plus destination. This is the best way to maximize range at the lowest cost (and remember, you can plug in your smartphone for navigation). With a $7,500 federal tax credit, additional state incentives, and a little haggling, you could be paying much less. But it's still a pricey car for half-baked battery technology that will likely become outdated and chemically degraded (meaning less range) in a matter of years. Lease a Leaf if the rates look agreeable, or buy a used one. Regardless, the Leaf is a good car, and—given the caveats—it's still a good electric car, too.

Артем That's the most you can spend and CarGurus doesn't recommend you do https://odds.am.

Have you driven a 2020 Nissan LEAF?
Rank This Car