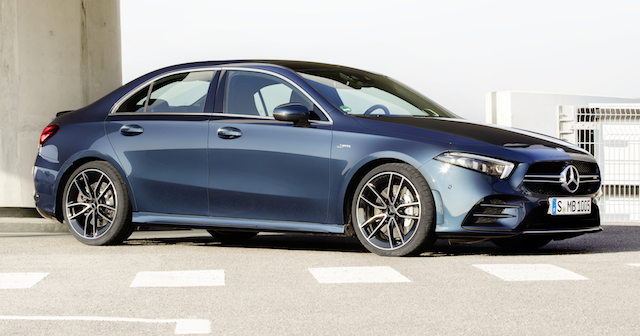 Just one year after exploding onto the scene and shaking up the entry-level luxury world, the Mercedes-Benz A-Class returns with some aftershocks in the form of a new AMG trim. In a segment too often cramped by compromise, the A-Class arrived with some surprising features that had it standing a bit above the competition. For one, there was the latest version of the Mercedes Benz User Experience (MBUX), a system not yet available on some of the most expensive Mercedes models. With such class-elevating tech, the A-Class showed that entry-level luxury didn’t need to be a pejorative. Now it’s returned to up the proverbial ante again with the AMG A 35.

The A-Class starts with a 2.0-liter engine featuring a single twin-scroll turbo that manages to squeeze 188 horsepower and 221 pound-feet of torque through a dual-clutch 7-speed automatic in A 220 trims. Those numbers certainly aren’t class-leading, but the only time you’re really going to wish for more power is on the highway, when it comes time to pass. In every other situation, the A-Class delivers plenty of oomph. And with it returning 24 mpg city and 35 highway, The standard A-Class hosts a pretty impressive group of numbers. If you’re still not satisfied, the AMG A 35 has something for you.

With the AMG A 35, that same 2.0-liter engine jumps up to a blistering 302 hp and 295 lb-ft, meaning you’ll never even have to consider not having enough power. And while the regular A 220 comes in front-wheel drive (FWD) or all-wheel drive (AWD), the AMG A 35 needs all four wheels putting down the power in order to maintain composure. With a promised 3rd-quarter release, the details on the AMG trim are scant, but there are some hints on the horizon. The extra power is due to a compression increase on the engine and the related upgrades to handle the extra pressure. Normal AMG touches can be expected: unique interior including special displays, seats, and red trim, larger brakes, retuned steering and suspension, and the regular A 220’s optional Premium package offered as standard. We’re also likely to see some performance-specific optional features as well. In all, Mercedes claims this will add up to a 4.7-second 0-60 time, and that should be enough to impress anyone driving a 4-cylinder vehicle.

But the standard A 220 trim should be more than enough car for nearly anyone, with what I think is the best ride in the segment. Space is great too, at least internally, and though I doubt you’d get full-size adults sitting in tandem, there is plenty of headroom in the back because the A-Class doesn’t suffer from that swooping coupe roofline like in the Mercedes CLA-Class. The major drawback here is with the trunk space. At just 8.6 cubic feet, it’s adequate but still small enough that I seriously lament the fact that the hatch version is available only outside of the States.

But if you’re looking at the A-Class there’s a good chance you’re more interested in the tech it has to offer. The good news is, you’re not going to be disappointed as the A-Class offers some of the most premium tech features out there. First up is the new MBUX, a system that shines with optional dual 10.75” screens on the dash. This is the most configurable interface I’ve encountered in my years of testing cars, and it is as quick and responsive as you’re going to find in a car today. There’s even augmented video in the right-hand screen that will display street signs and directions in real-time as you drive along

The A-Class also has Mercedes-Benz’s newest version of voice recognition, which Mercedes boasts is a smart system allowing for natural speech patterns. It still relies on pre-loaded commands, so don’t expect Alexa- or Siri-levels of intelligence here, but it’s still a competent and fun system that’s a nice step up for voice recognition. Other tech standouts include 5 USB-C inputs, as well as a nearly infinitely configurable 64-color ambient lighting system. And there are quirks like the “Seat Kinetics” system, which slightly and subtly changes your seating position on long drives to prevent cramping.

In all, this adds up to quite the deal for entry-level luxury, with quite a bit of flexibility. If you want to keep your A-Class as spartan as possible, you can drive away for around 32 grand. If you want some of the features I tested and mentioned above, you’re going to skirt closer to 50 grand. But either car is a great deal. For 32 grand, you’re getting a solid little sedan that will even offer you a bit of performance fun. At 50, you’re getting some of the newest tech on the market. So much so, that even the higher-priced Mercedes models won’t be able to look down on you. And if you wait until later this year to go with the AMG A 35… you’ll simply be gone too quickly to hear any of the comments anyway.

What's your take on the 2020 Mercedes-Benz A-Class?

Simon Elliot This car is bad, just kidding i dont know yet...

Have you driven a 2020 Mercedes-Benz A-Class?
Rank This Car

Invoice Price Of Mercedes A Class

what is dealer invoice of Mercedes A 220 sedan

How Do I Find A Good Lease Deal