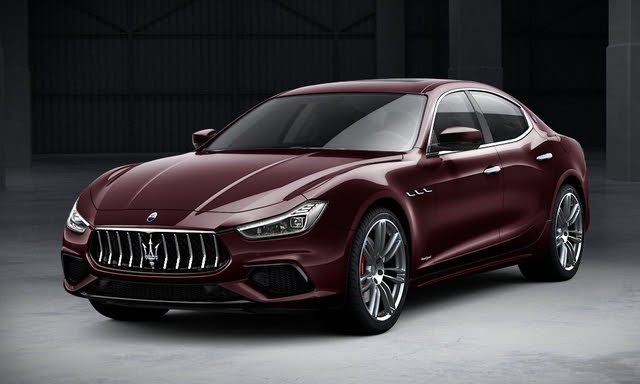 Founded over a century ago, Maserati has plenty of heritage. In 2014 it resurrected the “Ghibli” name used on its gorgeous Giugiaro-styled V8 coupe from 1967-73 and the boxier Gandini-styled V6 coupe of 1992-98. The latest Ghibli is decidedly less sporty and distinctive, given its sedan underpinnings and in-house styling. But it looks good and sounds great, plus it’s a standout from more mainstream executive cars like the Mercedes-Benz E-Class, Lexus LX 500, BMW 5 Series, Jaguar XF, and Audi A6. Maserati will likely start selling a hybrid version of the Ghibli in the near future, but for now, the Maserati Ghibli looks to be going into 2020 largely unchanged.

The svelte 4-door sedan is available in base, S, GranLusso, and GranSport trims with rear-wheel drive (RWD). Versions with all-wheel drive (AWD) are dubbed S Q4. All come with 19-inch aluminum wheels and bi-xenon headlights.

In base spec, the Ghibli gets a 3.0-liter twin-turbocharged V6 built by Ferrari that delivers 345 horsepower and 369 pound-feet of torque. The Ghibli S gets the same engine but boosts output to 424 hp and 406 lb-ft of torque, which is enough to get the car to 60 mph in under 5 seconds and on to a top speed of nearly 180 mph. An S Q4 Ghibli, by nature of its AWD, can scoot to 60 a couple of ticks quicker than the RWD version at 4.7 seconds. The GranSport version dresses the Ghibli up on the outside with different fascias and 20-inch wheels but also sharpens things up underneath with sportier suspension settings and electronic damping. All Ghiblis shift via an 8-speed automatic and sip premium fuel. Base versions will do 17 mpg city, 24 highway, and 19 combined, while S and SQ4 versions return 16/24/19.

Maseratis are expensive cars that tend to depreciate quickly, and there are plenty of choices in the midsize luxury segment that make more sense on paper. There’s something undeniably sexy about an expensive Italian car, though, and for some, that may be enough to make their choice.

What's your take on the 2020 Maserati Ghibli?

Have you driven a 2020 Maserati Ghibli?
Rank This Car