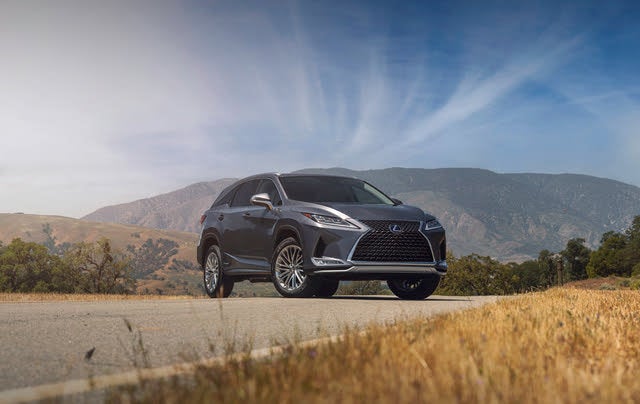 The Lexus RX was one of the first luxury SUVs, and remains at the top of its segment today, though competition from all angles is much fiercer than it once was. The RX 450h offers a frugal hybrid powertrain on top of the standard RX goodies and gets a handful of meaningful updates for the 2020 model year. The new 450h comes with an overhauled front and rear fascia, new suspension, an optional 12.3-inch touchscreen, and standard Apple CarPlay/Android Auto.

All RX450h models are powered by a 3.5-liter V6 engine paired with electric motors to produce a total system output of 308 horsepower. Power reaches all four wheels through a continuously variable transmission. The RX hybrid is quicker than its standard gas counterpart and features a tweaked braking system that helps smooth out the sometimes jerky stops that come with hybrid regenerative braking. Like its gas cousin, the RX450h is also available in an “L” configuration, which extends the wheelbase and interior space to add third-row seating.

Standard features in the RX include heated and cooled seats, blind-spot monitoring, navigation, a panoramic sunroof, Apple CarPlay and Android Auto, and an eight-inch touchscreen. The infotainment system has been updated slightly with a new trackpad interface. It replaces the sort-of-mouse-like controller that the previous model year had. That functionality is on top of the touchscreen capabilities, so there are multiple ways to interact with the system.

Every model also gets automatic emergency braking, forward collision warnings, automatic high beam headlights, adaptive cruise control, and an active lane control system. Pedestrian detection has also been improved for the 2020 model year. Those features were good enough to help the RX450h in crash testing, where it earned a 2020 Top Safety Pick from the Insurance Institute for Highway Safety. The Lexus also earned five stars overall from the National Highway Traffic Safety Administration. Like many crossovers and SUVs, the RX earned four stars for rollover resistance, due to its higher center of gravity.

Have you driven a 2020 Lexus RX Hybrid?
Rank This Car

How Is Lexus RX450H Performance