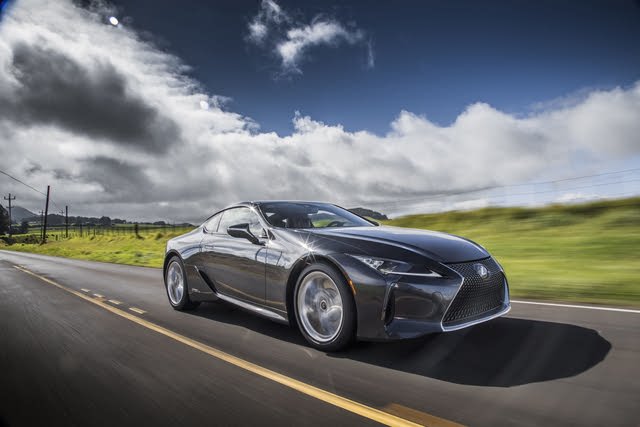 Lexus’s LC Hybrid, also known as the LC 500h, is a richly styled coupe that combines gasoline and electric power in a package that favors style and elegance over outright performance. The four-seat coupe sees few changes for 2020, the most significant of which is the addition of standard blind-spot monitoring.

The LC H is powered by a 3.5-liter V6 paired with two electric motors, one of which is largely dedicated to starting the gas engine and acting as a generator to charge the lithium-ion battery pack, while the other is used as a traction motor. All told, combined output is 354 horsepower. Torque is routed to the rear wheels through a unique transmission that pairs a 4-speed automatic with a continuously variable automatic transmission (CVT) unit. Lexus claims the paddle-shiftable automatic reduces the disconnect between the gasoline engine and the drive wheels common to most conventional CVTs.

Lexus claims the LC Hybrid is capable of all-electric operation up to 87 mph and that it can hit 60 mph in 4.7 seconds. The EPA estimates that the LC Hybrid will achieve 27 mpg city, 35 highway, and 30 combined.

The LC Hybrid offers an abundance of standard tech, including a 10.3-inch infotainment screen and navigation. Apple CarPlay and Amazon Alexa are integrated into the LC’s infotainment system. Lexus’s Enform Remote suite of connected services, which allows drivers remote locking/unlocking, ignition, climate-control settings, and more from their smartphone is included for one year.

The LC Hybrid also comes with a full complement of driver-assist features as part of the Lexus Safety System Plus. Highlights include adaptive cruise control, blind-spot monitoring, lane-departure warning with lane-keeping assist, and forward-collision warning with automated emergency braking.

There’s nothing practical about this Japanese coupe, but its striking looks and unusual powertrain set it apart from the other two doors. Every version of the LC exhibits extreme road presence sure to stand out wherever it goes, but the LC Hybrid represents a tiny slice of an already very exclusive club.

Have you driven a 2020 Lexus LC Hybrid?
Rank This Car