The Infiniti QX80 has been refined over the last few years offering more premium features and a fresh face without losing any of its hallmark capability. 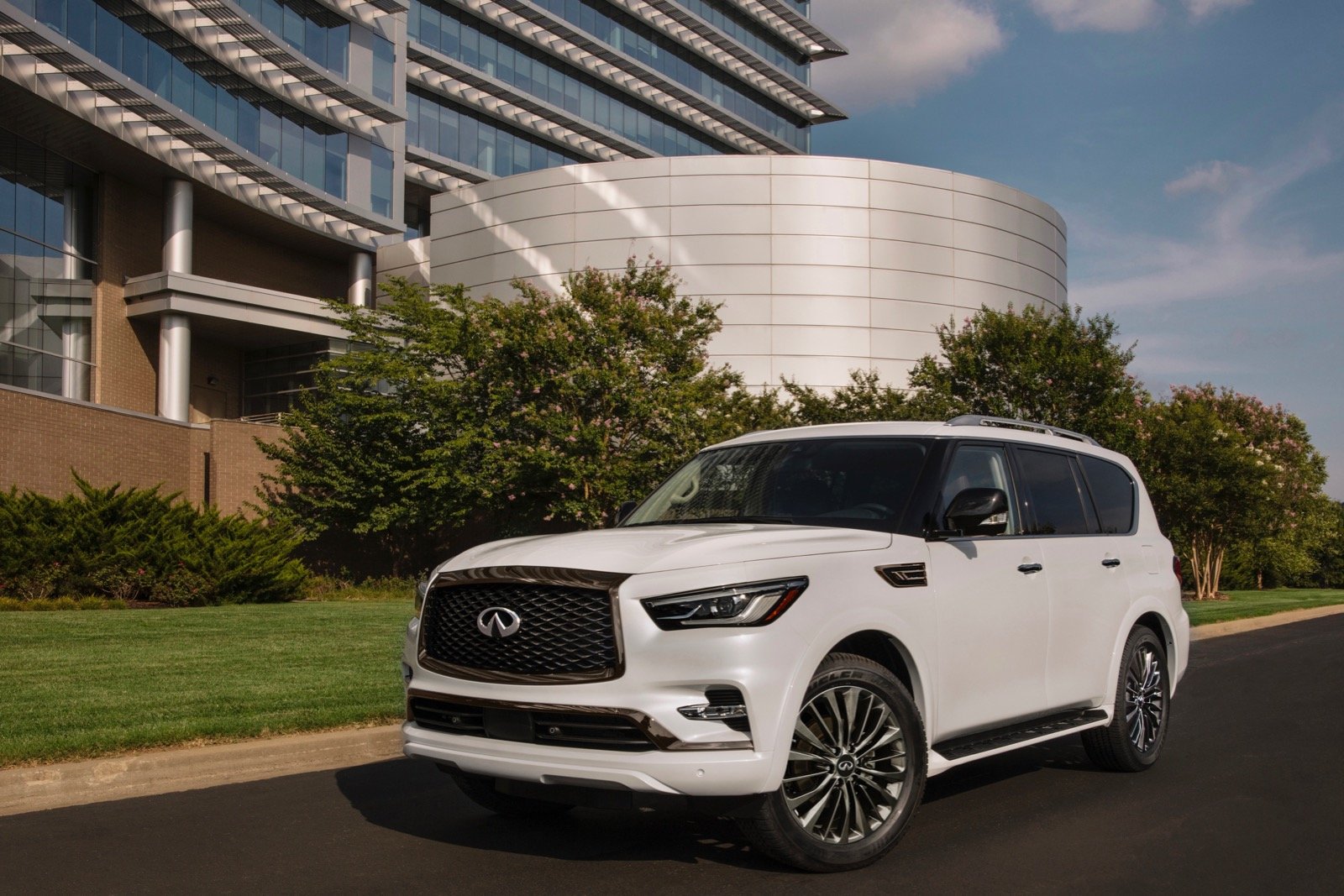 There’s no two ways around it. The Infiniti QX80 is the more luxurious fraternal twin of the Nissan Armada. Over the past few years, the brands have worked harder to differentiate the two models and with luxurious accommodations, the QX80 feels head and shoulders above the similarly-sized Armada. 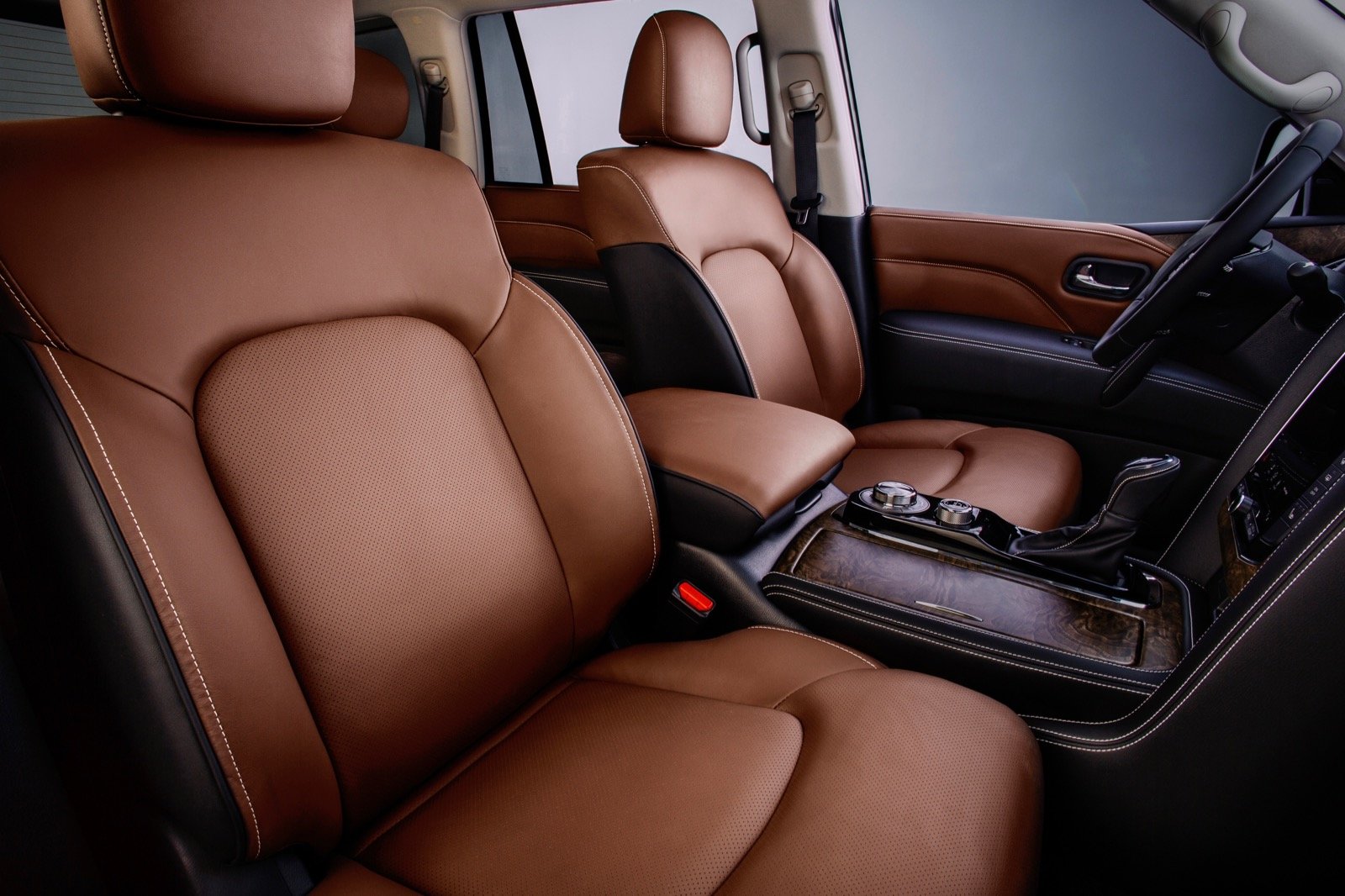 The flagship SUV in Infiniti’s lineup, the QX80 is substantially larger than the two-row QX50 and three-row QX60. For the 2020 model year, Infiniti sells the QX80 in just two trim levels: Luxe and Limited.

The exterior of the QX80 was refreshed for the 2018 model year. It got a more commanding presence with modern details like welcome lights; power-folding, auto-dimming, heated outside mirrors with integrated LED turn signals, courtesy lights, and reverse tilt-down feature; LED fog lights; headlight washers; adaptive front lighting with auto-leveling functionality; and LED taillights.

Illuminating the road ahead are automatic on/off LED headlights with high beam assist.

The QX80 also has a roster of equipment that helps with comfort and convenience including body-color running boards with integrated splash guards, a power-sliding tinted moonroof with one-touch open/close, skid plate, rear privacy glass, roof rails, and stainless steel running board caps.

Infiniti sells the QX80 in the buyer’s choice of nine paint jobs, some only available on the top-tier model. Three interior color schemes are available: Wheat, Graphite, and Saddle Brown. Limited-grade models get matte silver and open-pore Ash wood trim.

Though the materials that make up the cabin have increased in quality in the last few model years, some of the trim pieces in the QX80 aren’t up to par with the offerings in other SUVs in its class. Fit and finish is generally good and Infiniti recently revised its infotainment system layout, updating it to a sleeker and more modern display and surround.

The upscale cabin is filled with soft-touch materials and is generally attractive. However, the center stack prominently features piano-black plastic, which loves to play home to fingerprints. 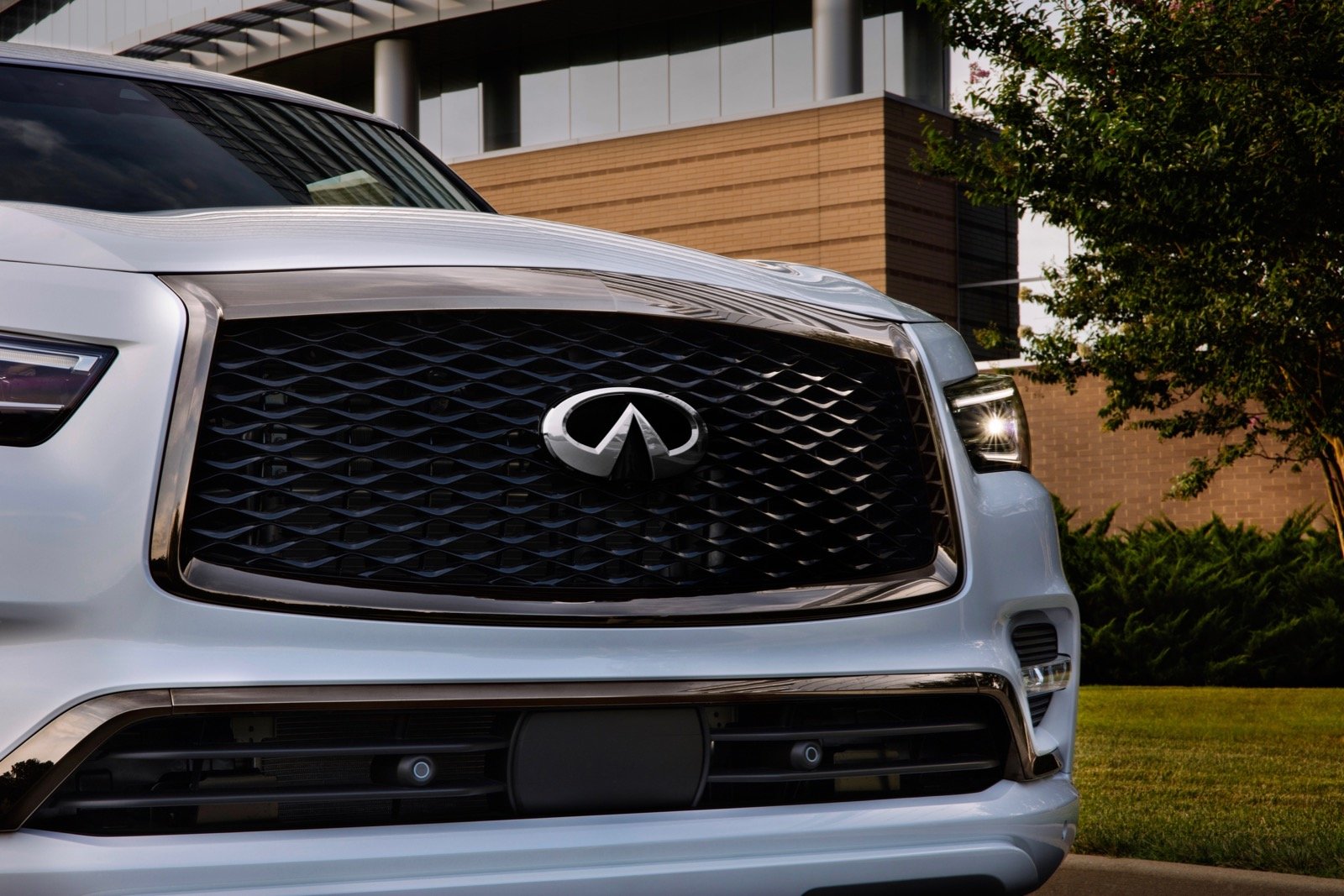 All QX80s are powered by the company’s 5.6-liter V8 engine, which is shared with the Nissan Armada. The engine is paired with a seven-speed automatic transmission that has a manual-shift mode. It gets 400 horsepower and 413 pound-feet of torque. The QX80 takes premium unleaded fuel.

Off the line, the QX80 delivers a measured roll to full speed. It’s obvious that the QX80 is a heavy SUV, but the powertrain can handle the load. Its transmission shifts relatively smoothly, though it’s clunky when downshifting compared to the 10-speed automatics in General Motors and Ford products.

Buyers can get the QX80 Luxe with either rear- or four-wheel drivetrains. All-wheel drive (AWD) is not an option. The QX80 Limited comes standard with 4WD. Infiniti has made the QX80 one of the more capable large SUVs sold. It’s able to take on sand, mud, slippery climbs, and dirt trails with ease, especially when equipped with the right tires and an experienced driver behind the wheel. There are Normal, Snow, and Mud drive modes.

Steering the QX80 at low speed isn’t a problem, and the QX80’s light wheel feel makes navigating up and down off-roading terrain easier to manage. Where the three-row SUV runs into trouble is at higher speeds. Keeping the wheel from wandering while on the highway is a full-time chore.

The SUV’s optional Hydraulic Body Motion Control system works in tandem with four-wheel drive to keep the QX80 grounded around turns and when driving curvy roads. Twenty-inch wheels are standard and 22-inch wheels are available.

Infiniti has given the QX80 a standard rear auto-leveling suspension. It soaks up a fair amount of the road’s imperfections and allows for riders to enjoy a relatively smooth ride. Additionally, the suspension keeps the SUV level when it's towing.

Infiniti gives every QX80 a seven-pin trailer harness plug with a connector. It has an 8,500-pound towing capacity. 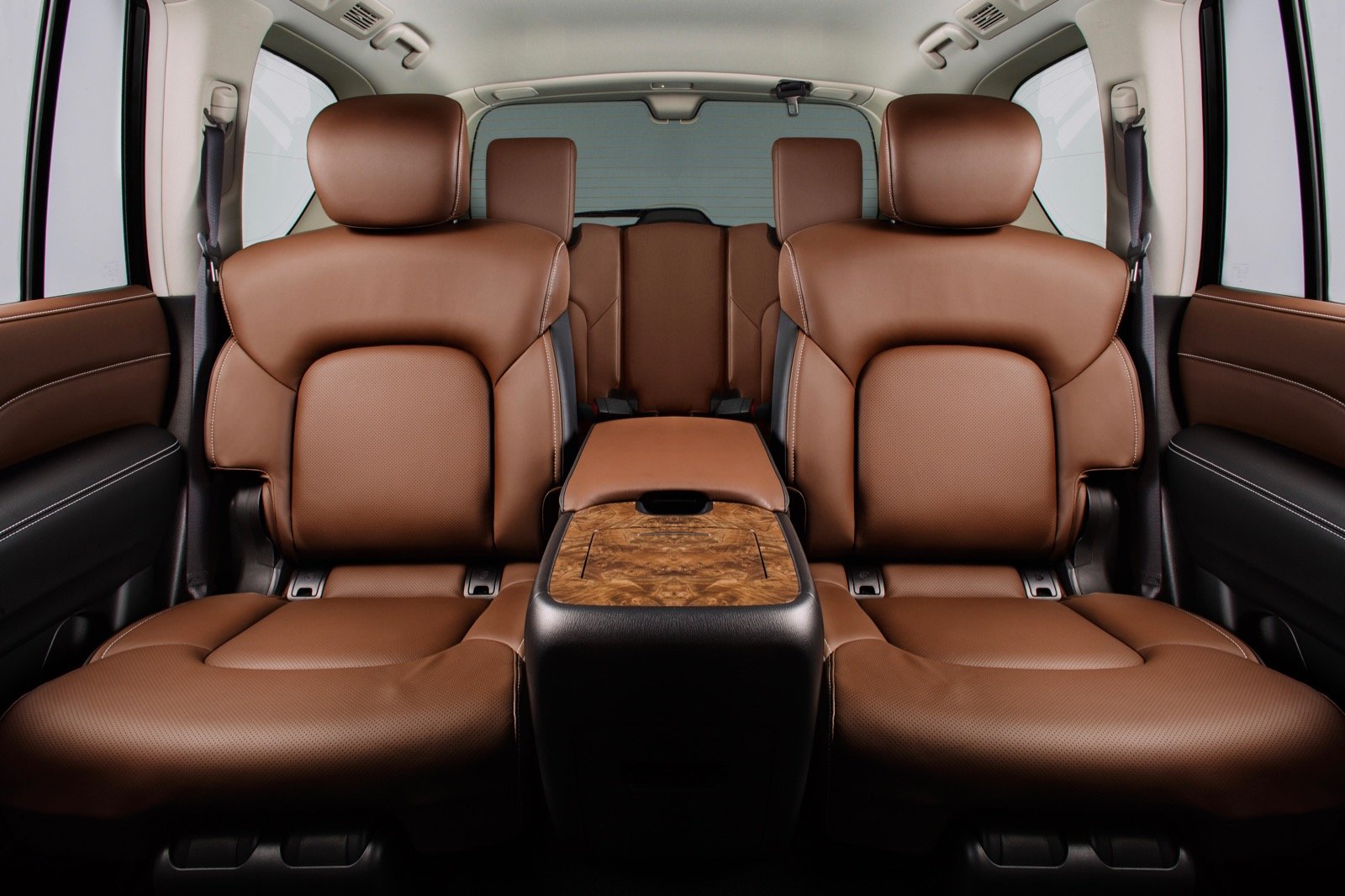 Plush, spacious seating is standard in the first two rows of the QX80. The SUV has tighter seating in the third row thanks to unimpressive legroom. That space is best left for small children or the family dog if it’s even used at all. Seating for seven, via captain’s chairs in the second row, is standard. Buyers can get a 60/40 split-folding bench second-row seat.

The leather-appointed seats are available in perforated semi-aniline leather upholstery, which can help keep the car cool on hot days. Alcantara seats with quilting, contrast piping, and stitching are available as well.

A heated, leather-wrapped, tilting and telescoping steering wheel is standard.

A dual-occupant memory system for the driver’s seat, mirrors, and the steering wheel is standard and linked to individual Intelligent Keys. Entry and exit seating assist is standard.

Getting into the third row is made easier thanks to flip-up easy-entry second-row captain’s chairs.

The QX80 doesn’t have much in the way of high-tech features that need to be controlled while on the road. This means that a driver and front passenger can access the center stack’s straightforward controls and infotainment system with ease. Despite the fact that the steering wheel looks like it’s from a different generation, it’s functional though its design doesn’t hold a candle to what is in other SUVs. 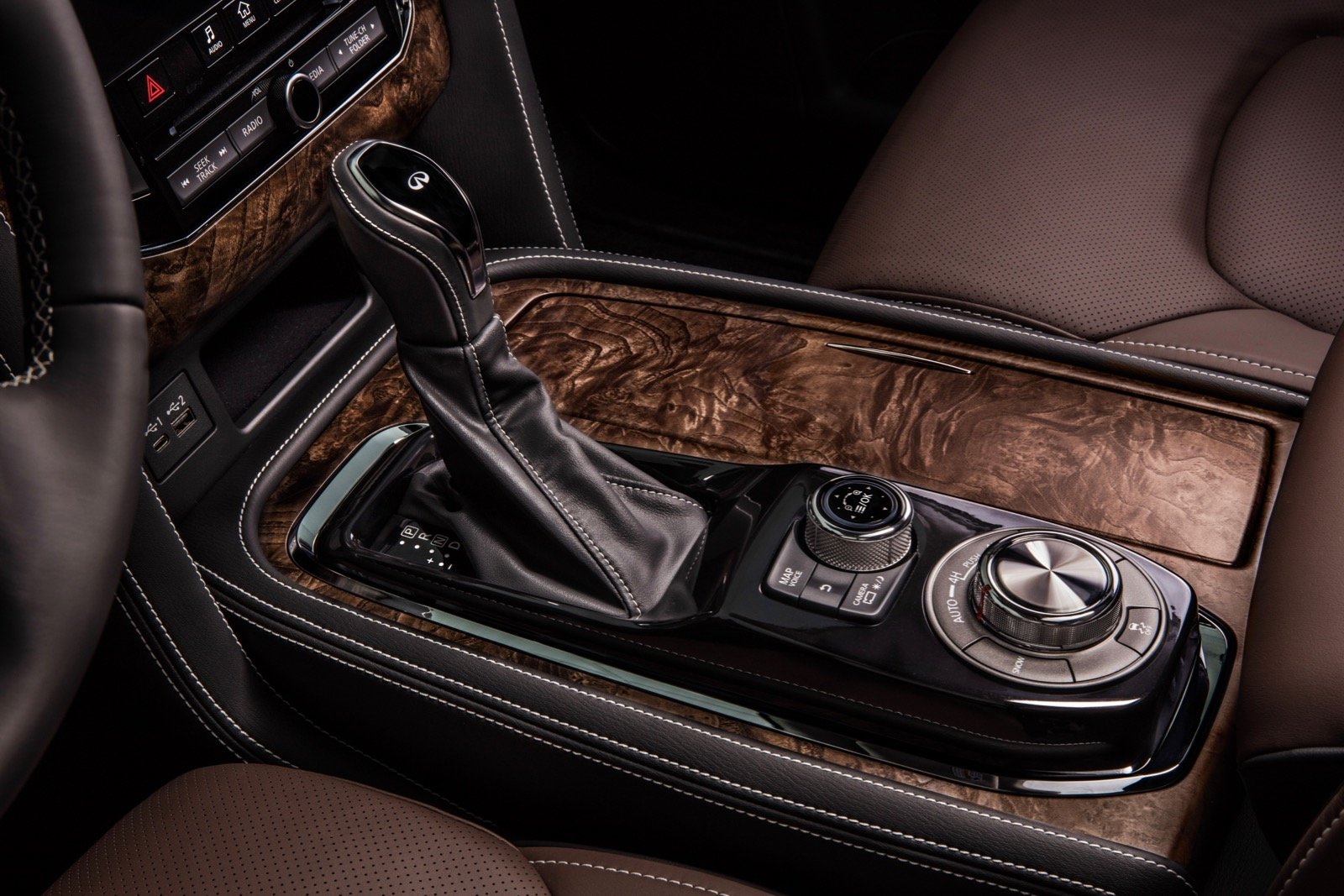 The Infiniti QX80's standard features list includes an 8-inch upper infotainment touch screen and a 7.0-inch lower touch screen. They split functionality allows for the navigation system to be run on one screen while the audio system information is displayed on the other.

A number of SiriusXM services including Travel Link and Traffic are available and come with a complimentary four-year trial period that provides access to real time traffic, weather, and fuel price information.

The infotainment system is easy enough to use, but it’s not particularly modern in its design. It’s responsive enough to get the job done without frustration but is otherwise unremarkable. 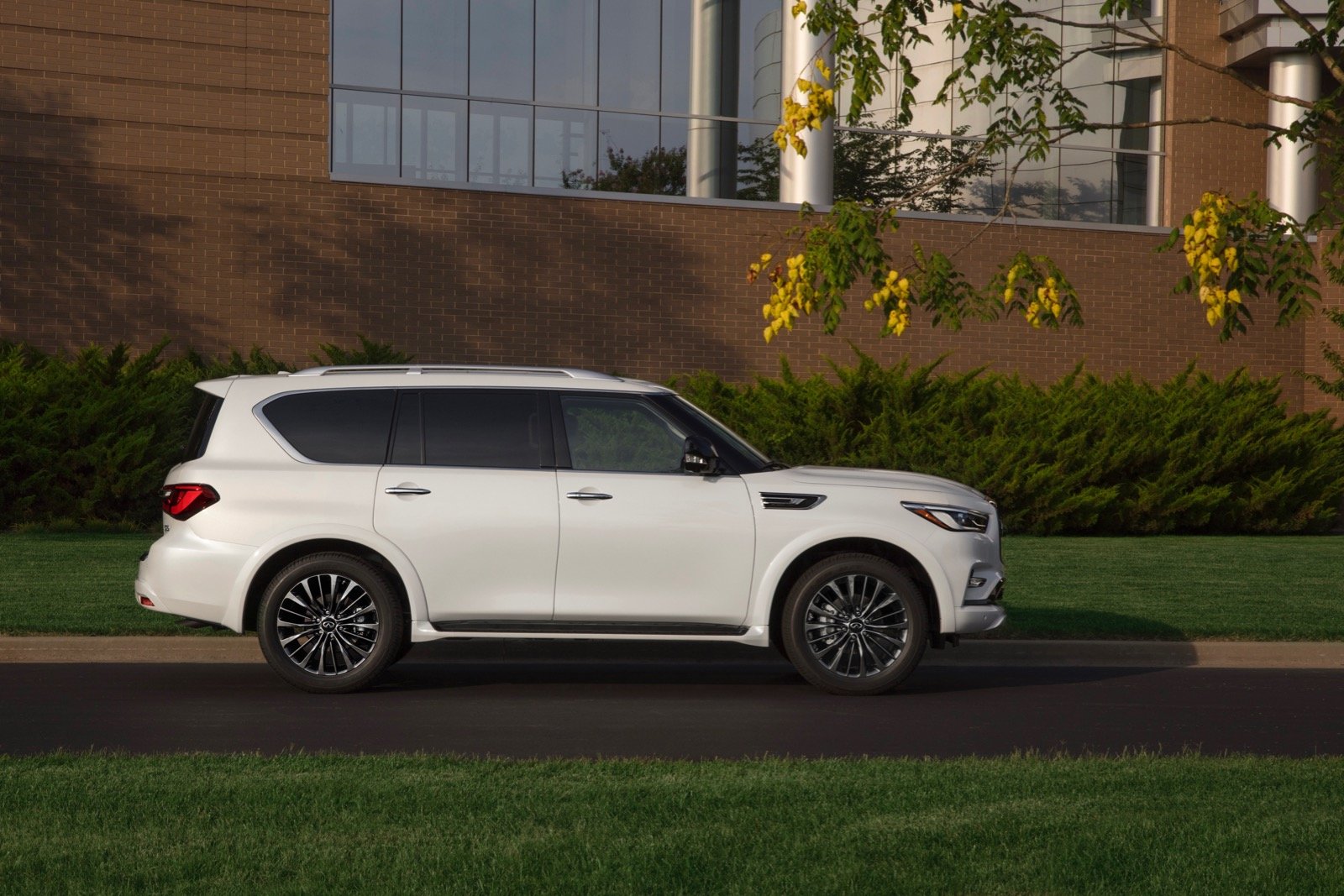 The Infiniti QX80 is an older model so it doesn’t have all the newfangled driver-assist features many other luxury SUVs have. However, it does have a good roster of standard and available technology.

The Insurance Institute for Highway Safety (IIHS) hasn’t fully rated the QX80’s crashworthiness, but it has earned "good" scores in the moderate overlap front and side crash tests. The National Highway Traffic Safety Administration (NHTSA) rates the QX80 as having better crashworthiness from the side than the front and having a moderate risk of a rollover during a crash. 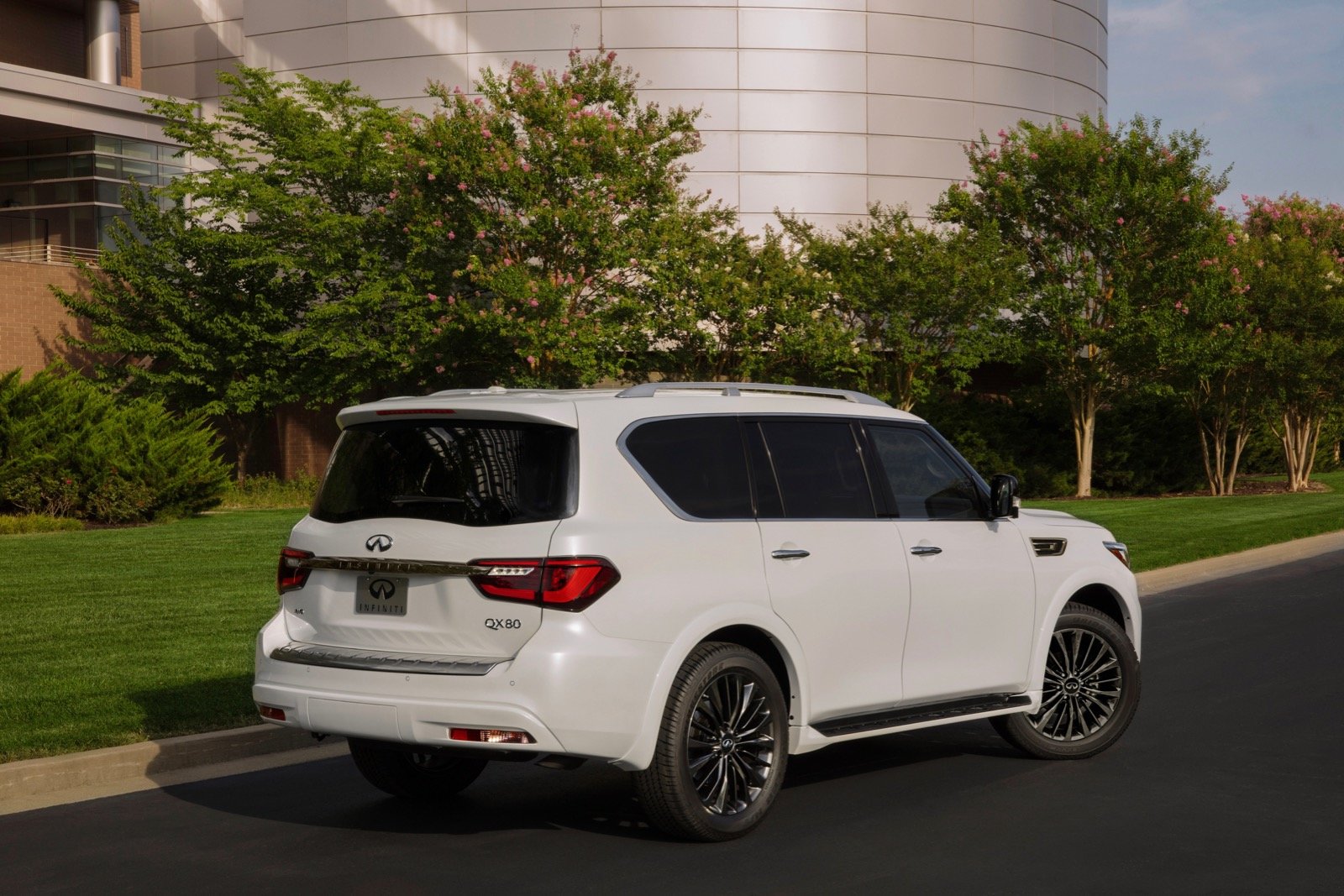 Infiniti sells the QX80 with a number of packages and options. The Theater Package is $2,000 and includes two 8.0-inch entertainment screens that are integrated into the front seatbacks, two pairs of wireless headphones, a wireless remote control, auxiliary input jacks, and a 120-volt power outlet.

The QX80 Luxe is similar in price to the highest grade Nissan Armada. Given how similar the models are, Nissan shoppers should cross-shop the Infiniti before committing to the Armada.

There’s not a lot of direct competition for the QX80 besides the Armada. The higher-priced Lexus LX is just as plush and equally old while the BMW X7 and Mercedes-Benz GLS deliver a better powertrain experience and more comfortable third-row seating, but they can be optioned to cost much more.

If you’re looking for a three-row SUV with more space out back and better fuel economy, and don’t want to compromise on towing capacity, you might want to take a look at the recently redesigned Chevrolet Suburban and GMC Yukon. Their footprint, however, is much bigger, though they are more fuel-efficient. They also have the latest safety and infotainment tech. The pricing of the models is similar to the QX80.

Infiniti QX80 models are backed with a four-year/60,000-mile basic warranty and a six-year/70,000-mile powertrain warranty.