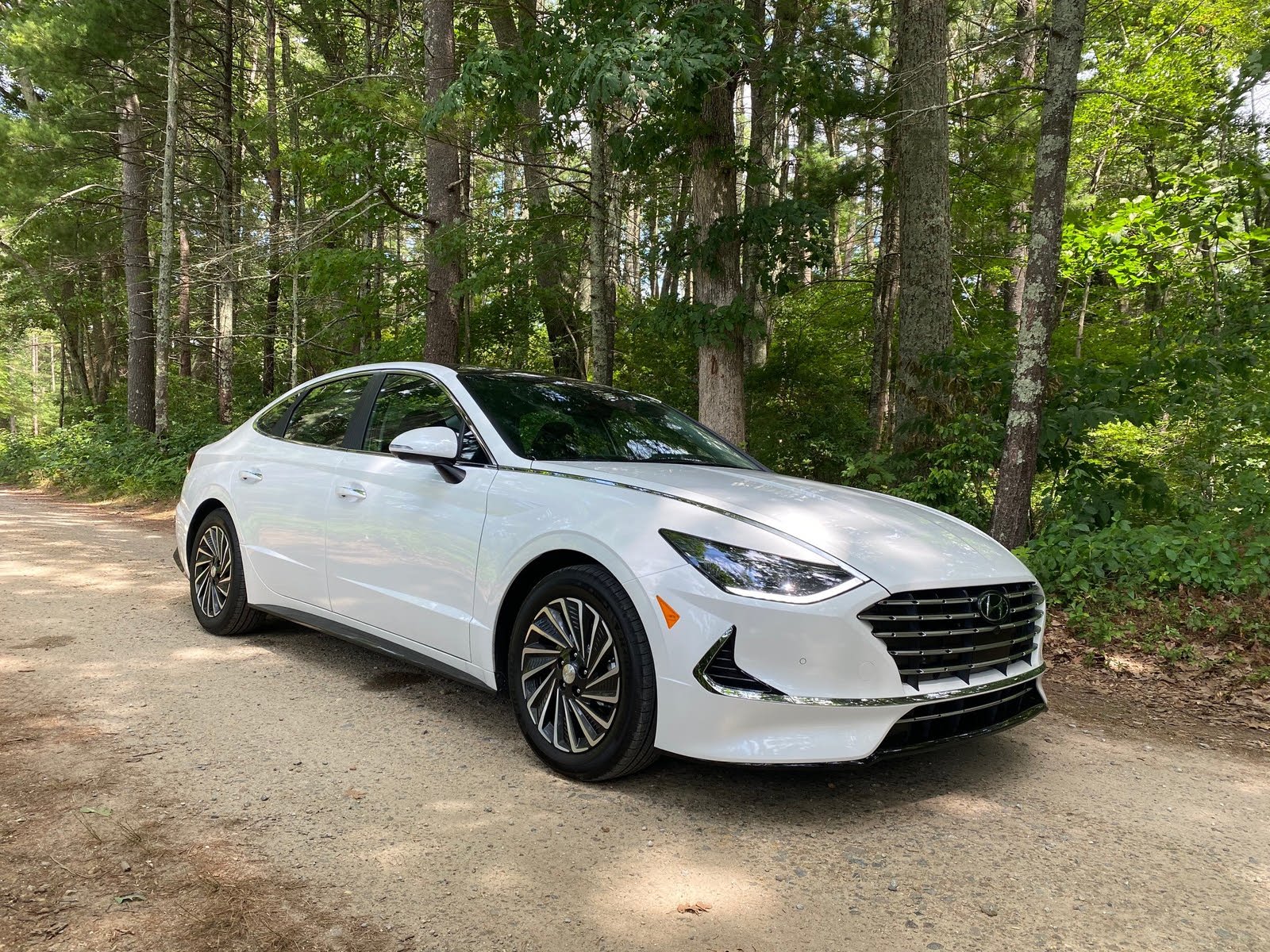 It's easy to hit 40 miles per gallon in a big sedan with three other people. Sophisticated gas-electric hybrid systems make this possible on larger cars without sacrificing comfort or space. But now, even in the non-premium segment, luxury is a selling point. Among midsize hybrid cars, Hyundai has made the absolute best. The 2020 Sonata Hybrid totes impressive fuel economy and technology, it drips with design, and it soaks in refinement. If this sounds like an advertisement, go see one in person. 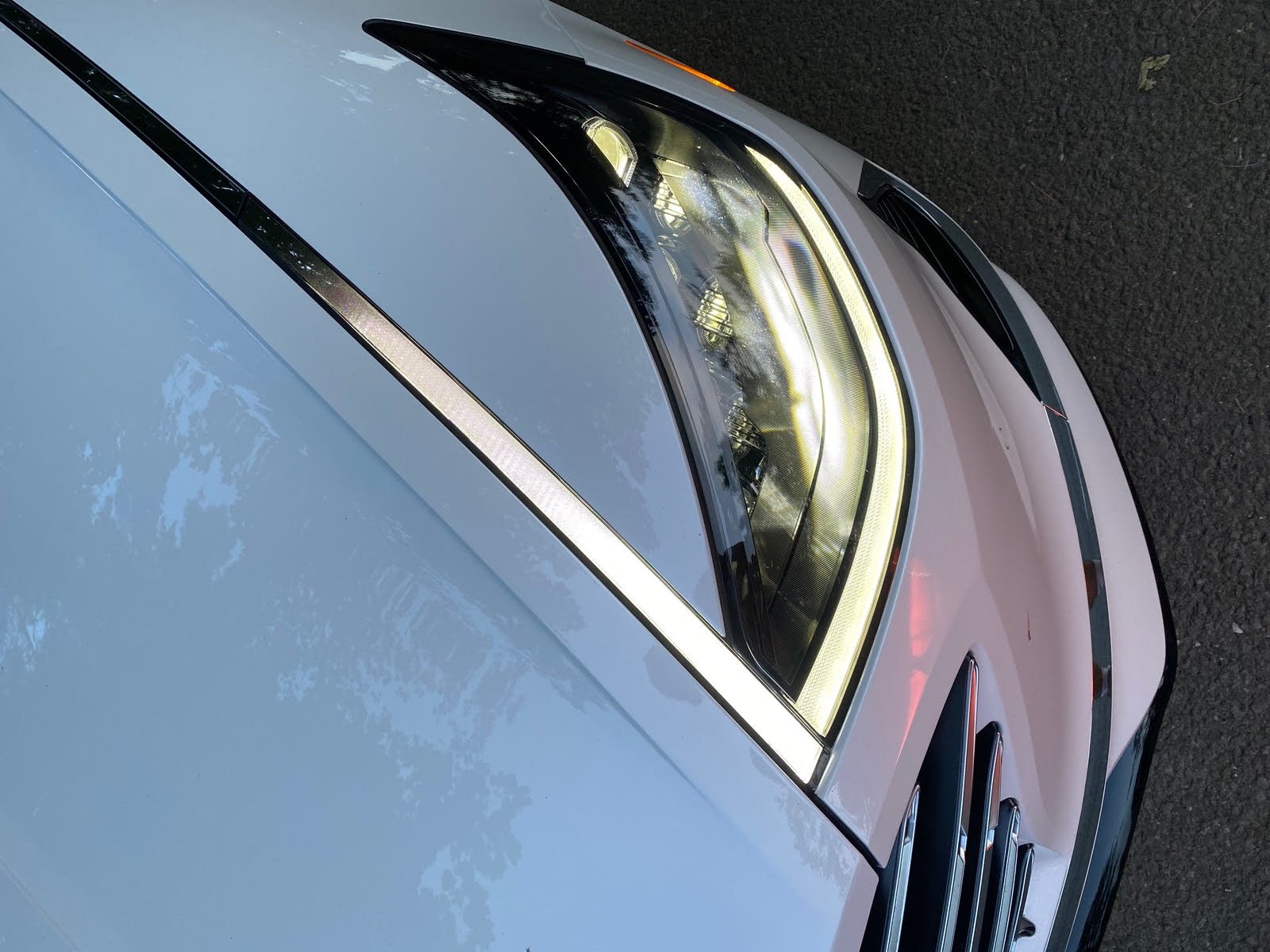 Regular people who probably weren't car enthusiasts kept complimenting our white Sonata as we shot our video review in Massachusetts. And of course they did—it's pretty. The Sonata is now a long and elegant car. Its sleek, fastback profile and tailored body are stunning for a mainstream family car priced in the mid-20s. Similar to how some historians cannot fathom the pyramids being built without alien assistance, the general public may have trouble accepting the new Sonata as entirely a Hyundai creation. But accept they must. Hyundai Motor Group hired the right man (design chief Peter Schreyer, formerly of Audi) at the right time in 2006. He led Kia out of embarrassment and elevated every Hyundai-Kia design, with ex-Bentley chief Luc Donckerwolfe alongside, to the point we're at today. Hyundai's reputation as a bottom-feeder brand with ugly, low-quality cars keeps getting harder to remember with each passing year. And while the Sonata had begun looking stylish for 2011, looking at that car now is like watching DVD on a 720p TV. The 2020 Sonata is a VR headset in 4K. The transformation is shocking.

Biggest news: The Sonata brings the absolute coolest LED running lights in history. They start under the headlights, per usual, and then cut upwards onto the hood itself, fading out above the fender into bright chrome trim that continues uninterrupted to the rearmost window. This is one element on top of a solid base: Wide grille, low stance, rounded greenhouse, smooth contours with just enough edging to play with the shadows. Then there's the black ducktail spoiler with the integrated fins. Hyundai swears it's all to make the Sonata more aerodynamic, but it looks fantastic. The Hybrid includes unique turbine-style wheels in either 16- or 17-inch diameter, a redesigned grille with more active shutters to reduce drag, no exhaust pipe finishers out back, and the option of a solar roof, covering the entire thing with solar panels.

Inside, the Sonata has a better-made and better-designed interior than any new Cadillac, let alone a Chevy or Ford. The Honda Accord puts the driver in a sportier seating position, but otherwise, the big screens, wide air vents, polished black console with knurled dials, slick ambient lighting in 64 colors, and the option to spec contrasting colors in soft leatherette that covers the dash and door armrests are luxury-grade. Everything feels special and unique. Hyundai had all kinds of trouble getting here, but we're here, and it's that good. 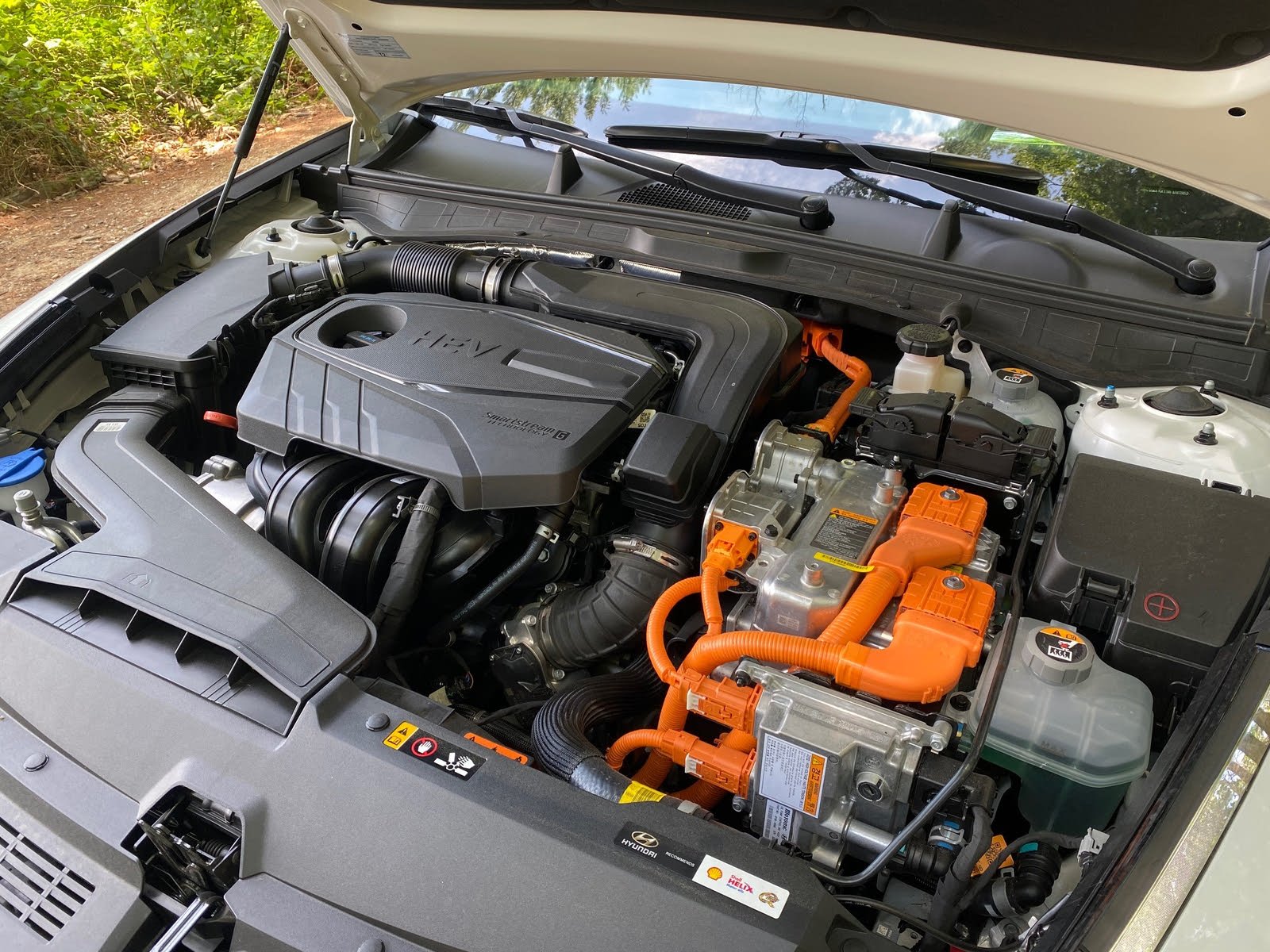 The Hyundai Sonata Hybrid uses a different four-cylinder engine than the 2.5-liter four-cylinder and 1.6-liter turbocharged four-cylinder found in the regular Sonata. This one is a 2.0-liter running on the less powerful Atkinson combustion cycle for greater efficiency, which by itself makes 150 horsepower and 139 pound-feet of torque. Paired with a 51-hp electric motor and a 1.5-kilowatt-hour lithium-ion polymer battery, the total is 192 hp and as much as 151 lb-ft from the electric motor at a standstill.

It's not a lot, but the Sonata Hybrid felt light on our test car's 17-inch tires (which thankfully don't appear small). A six-speed automatic transmission does shifting duty instead of the continuously variable automatic transmission (CVT) found in most hybrids. This makes for more normal-feeling acceleration at the expense of smoothness. At times, the gearbox hesitates to engage at stops and is a half-beat behind in mid-range acceleration, like it's trying to catch up to the engine and motor. Picking Sport on the drive-mode selector helps keep the engine running and quickens shift times, though it's one or two calibrations from greatness.

However, during our week with the car, this behavior was mild and became overshadowed by the Sonata Hybrid's silent interior, plush ride, and competent chassis. The suspension tune is soft, but the driving experience doesn't feel floaty. The steering is similarly light and tracks well, and the brakes, while softer in pedal feel due to the regenerative system, are easy to modulate when coming to a stop. The powertrain keeps the engine more active at lower speeds than in other hybrids, but it turns on and off without vibrations or excess noise. Coasting or using light throttle at highway speeds will let the car run entirely on the battery.

The Blue trim level has the best fuel efficiency because it's a base car with less equipment and rolls on smaller tires. It's an amazing 50 mpg city, 54 mpg highway, and 52 mpg combined—for a big roomy sedan that doesn't look dorky. The SEL and top-of-the-line Limited trim each have more convenience and luxury features, and they return 45/51/47. Stellar. We averaged about 41 mpg driving more aggressively than most owners would. Else, it would be easy to hit 47 mpg and reach the 620-mile estimated range (or the Blue's 686 miles) on one gas tank. 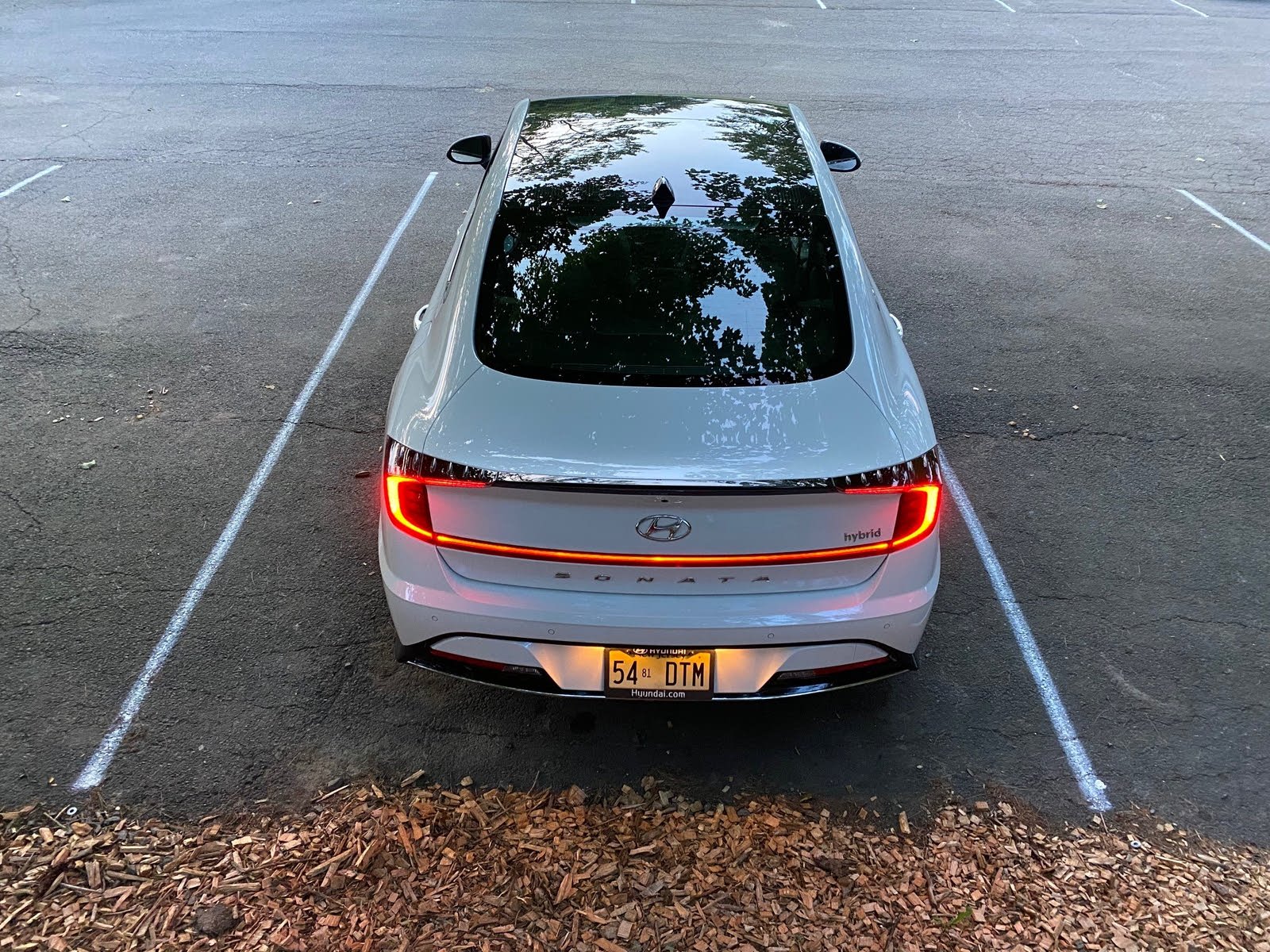 On the top Hyundai Sonata Hybrid Limited trim, the solar panels do their job—such as running the air conditioning at full blast when parked. Hyundai says they can generate the equivalent of two miles of extra driving range if the car is parked outside for at least six hours in full sun. That's several hundred "free" miles in a year. We can't verify that claim, but after sitting outside in the summer heat all morning and early afternoon, the battery showed a full charge when the previous evening it was only at half. Clearly, the solar-panel roof was doing something good. And the A/C blew very cold on just the battery, too, for 20 or so minutes. While this setup negates a sunroof, it does afford more headroom for the driver and front passenger.

In the back, rear-seat legroom is very spacious. With vents, manual side-window shades, and heated seats, the rear cabin is an easy place to catch a snooze, especially since the whole car is so quiet and comfortable. Cargo space is also great, at 16 cubic feet. You can pop the trunk with a button hidden within the top of the "H" logo on the lid. Visibility is good in all directions and even better with the crisp 360-degree cameras. The base trim doesn't have power seats or a rear center armrest, so shop accordingly to your needs.

The push-button gear selector, while less intuitive than a regular PRNDL configuration, becomes easier to use thanks to large buttons that follow a curve. Your fingers can trace the correct button by feel, without looking down. A wide toggle switch below the gear selector controls the drive modes and includes an auto-hold function that keeps the brakes applied at a stop when you take your foot off the pedal. A slim center stack has standard automatic dual-zone climate with silver buttons to adjust all settings. Beneath that is a flat pad for phones (and the optional wireless charging pad with cooling fans built-in). On the Blue and SEL trims, clear analog gauges flank a small color display on the instrument panel. The Limited uses a high-res 12-inch digital dash and 10-inch touchscreen running newer, more sophisticated software than what's installed on the standard 8-inch screen. 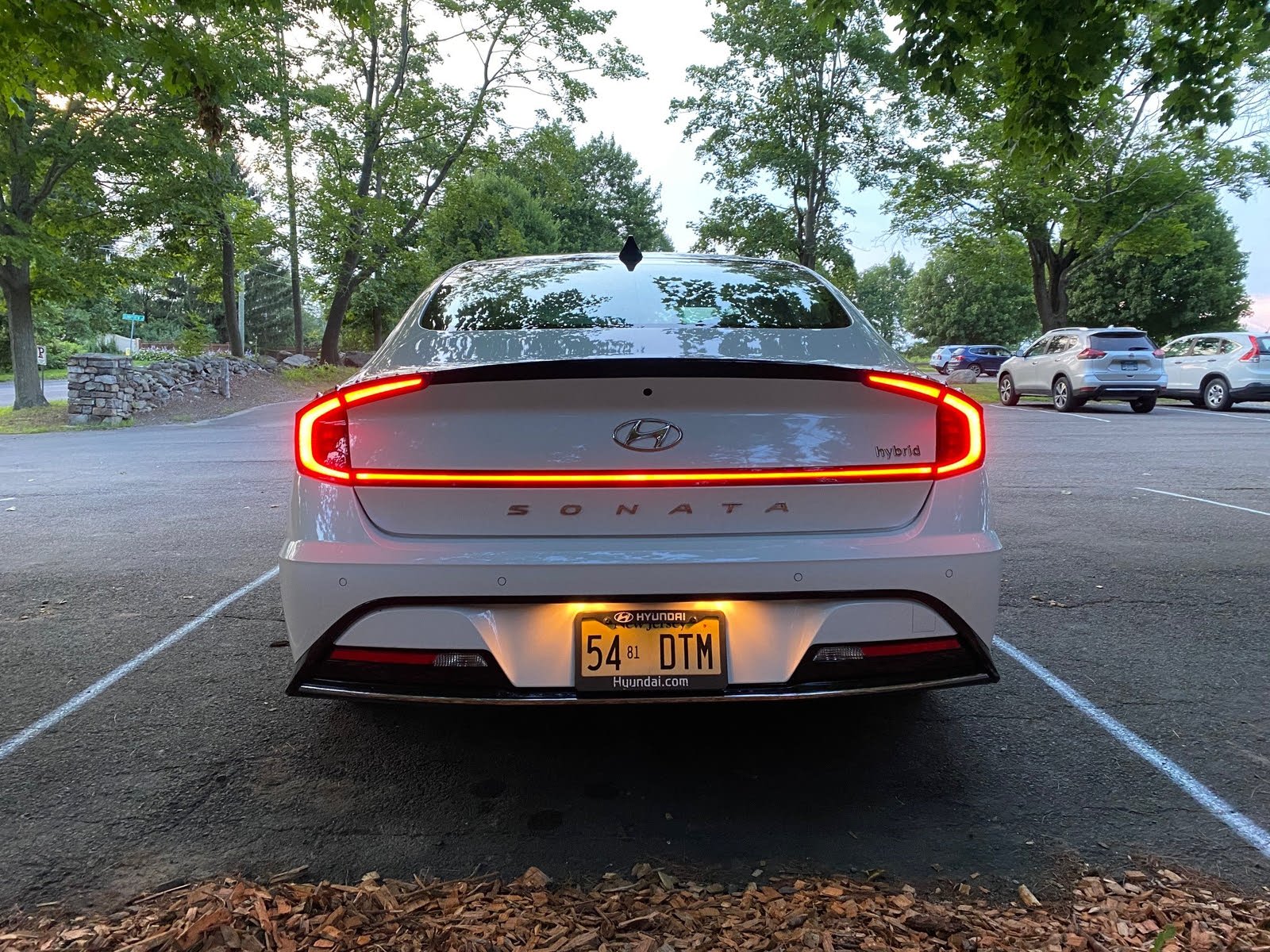 The new infotainment system makes the Limited worth the money. The color scheme is a soothing mix of blues and attractive sans serif typefaces. It makes the standard setup, seen in most Hyundai and some Genesis models, look amateurish, even cartoonish. Both systems, however, are quick and easy to use. Apple CarPlay and Android Auto come standard, as does Hyundai Blue Link, which allows remote operation and diagnostics from a smartphone, smartwatch, or Amazon Alexa. You can use a digital key to unlock and start the vehicle, either with the supplied card or stored on a compatible Android phone. Activating the turn signals will display live camera feeds of either blind spot in the gauge cluster behind the steering wheel. The video takes over either the speedometer for the left signal, or the energy flow meter for the right, and it's so helpful whenever you're merging.

Equipped with Highway Driving Assist (HDA), the center of the digital dash will show you when the car is tracking the lane markings and about to approach a slower car. It's a very accurate and unobtrusive semi-automated system that works great in traffic and on long cruises. (The automated parking system, whereby you can move the car with the key fob from outside the car, is not offered on the Hybrid.) The head-up display (HUD) also shows detailed info when using the HDA. The animations and graphics look and feel very polished. With so many helpful features that look this good and are so intuitive, you'll feel like you're driving a much pricier car. 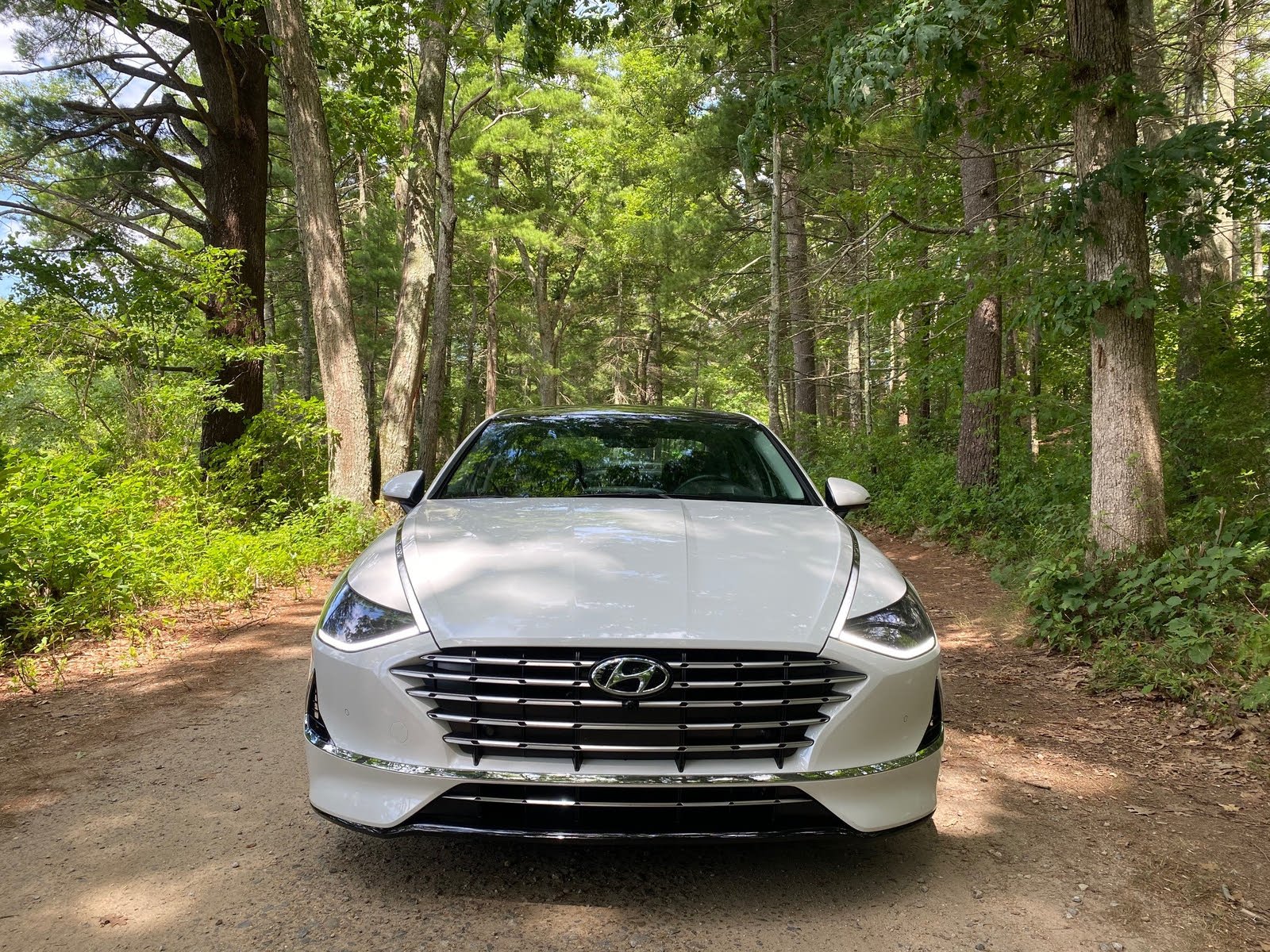 The 2020 Sonata Hybrid earned a five-star overall rating from the National Highway Traffic Safety Administration (NHTSA), though it earned four stars in a frontal crash where most cars now earn the full five. The regular Sonata is a Top Safety Pick by the Insurance Institute for Highway Safety (IIHS) for scoring the top ratings in six crash tests, for the optional headlights, and for its standard emergency forward braking with pedestrian detection. Lane-keep assist, blind-spot monitoring, adaptive cruise control, a driver attention monitor, rear emergency braking, and automatic high beams are standard on every Hybrid trim. Parking sensors and the Highway Driving Assist are offered only on the Limited. A driver's knee airbag comes standard. 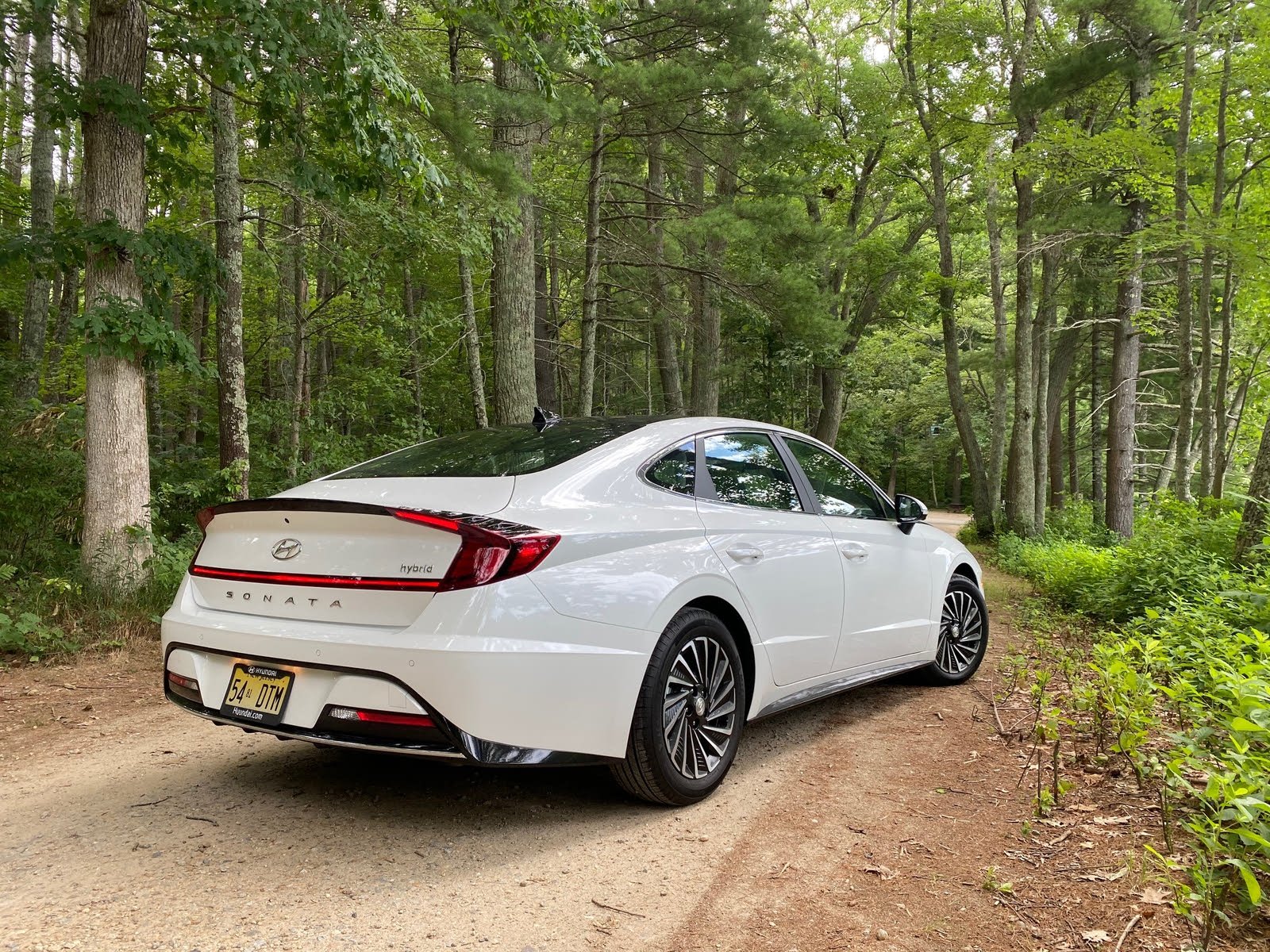 With an MSRP starting at $27,750, the Sonata Hybrid is $4,150 more than a base Sonata SE but includes more standard equipment—and fuel efficiency that's 60-percent greater when measured on the EPA combined cycle. Like most Hyundai models, the Sonata is the best value when fully loaded at $36,570 like our Limited test car. Here, it feels like a $50,000 car. Hyundai now throws in three oil changes in addition to its five-year/60,000-mile warranty and 10-year/100,000-mile powertrain warranty (which also covers the battery). Roadside assistance is included for five years and unlimited miles. There is no better hybrid sedan with such incredible styling, efficiency, quality, and innovative technology. You can look at a Toyota Camry Hybrid, Honda Accord Hybrid, Kia Optima Hybrid, or Ford Fusion Hybrid—but none are as great as this Sonata.

What's your take on the 2020 Hyundai Sonata Hybrid?

Have you driven a 2020 Hyundai Sonata Hybrid?
Rank This Car