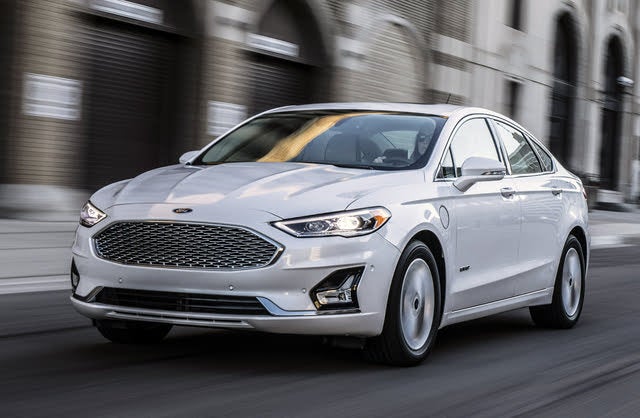 Looking for a Used Fusion Hybrid Plug-in in your area?

Ford has said it’s getting out of the car business, but its Fusion midsize sedan is still here for 2020. Not only is it here, but two different hybrid versions are available: this plug-in hybrid and a standard hybrid with a lower-capacity battery. Both cars use the same 2.0-liter 4-cylinder gas engine assisted by an 88-kW (118 horsepower) electric motor. Combined output is 188 hp. A continuously variable transmission (CVT) routes torque to the front wheels.

Ford claims a 26-mile all-electric range and an 85-mph all-electric top speed for the Fusion Plug-In Hybrid. The EPA rates it at 103 miles-per-gallon equivalent combined in all-electric mode and 42 mpg combined when operating on gasoline. Because it’s capable of accepting only Level 1 (120-volt) charging, the Fusion Hybrid requires a lengthy 7.5-hour window to recharge from full depletion.

All Fusions include the following safety features: blind-spot warning, lane-departure warning, automatic high beams, forward-collision warning with automated emergency braking, and a reversing camera. Otherwise, because it’s offered only as a Titanium trim, this is a very well-equipped Fusion. Adaptive cruise control that includes stop-and-go capability plus reverse proximity sensors is included. Power-operated heated and cooled front seats are standard. Leather adorns all the seats and the heated steering wheel, and this Fusion includes dual-zone climate control and navigation. LED headlights and fog lights as well as 17-inch wheels are also standard.

Opting for the plug-in hybrid version of the Fusion means making a compromise on trunk space, as some of that volume gets lost to the hybrid battery. Smart shoppers in this segment will likely consider the Honda Accord Hybrid and Toyota Camry Hybrid, though neither of those is a plug-in. Both also lack the Fusion Hybrid Plug-In’s battery capacity and therefore can’t match its all-electric range, though the Honda makes a nod to all-electric operation with a dedicated, if optimistic, EV mode. Hyundai offered a plug-in hybrid in the 2019 model year, which will likely be replaced soon by a sleeker hybrid version built around the redesigned 2020 Sonata.

Although the Fusion remains a roomy and comfortable midsize sedan, it’s older than many of its primary competitors, which have seen more recent redesigns. And because it’s swearing off cars, it’s not likely Ford will offer a new Fusion of any variety anytime soon.

What's your take on the 2020 Ford Fusion Hybrid Plug-in?

Have you driven a 2020 Ford Fusion Hybrid Plug-in?
Rank This Car

Looking for a Used Fusion Hybrid Plug-in in your area?