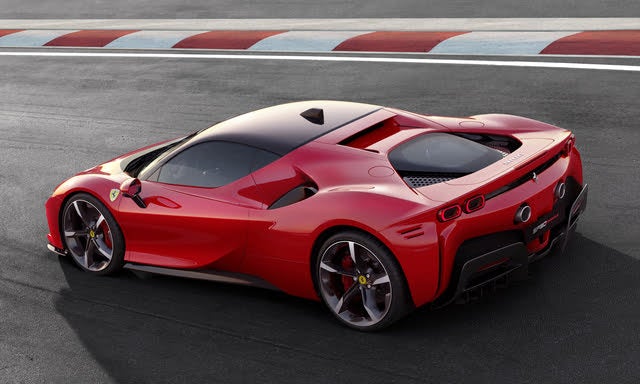 Looking for a Used SF90 Stradale in your area?

Any new Ferrari is always exciting, so the new SF90 Stradale is big news. Scuderia Ferrari, the racing team that spawned the carmaker we all know and love, turns 90 years old in 2020, so that explains the “SF90” name, which is shared with Ferrari’s 2019 Formula One car. As for the car itself, it’s a plug-in hybrid in the same vein as the 2013-18 LaFerrari, but the SF90 has a V8 instead of a V12 and carries a much lower price tag. You also don’t have to be preselected to buy one, unlike the LaFerrari. For now only one trim is available, although one available options package ups performance notably.

The heart of the SF90 is a 4.0-liter V8 that works together with two turbochargers and three electric motors. But whereas most hybrid systems work together to achieve the greatest fuel efficiency, this one goes for maximum performance. The conventional gasoline engine makes a whopping 769 horsepower on its own, while total system output is 986 horsepower, which goes to all four wheels via an 8-speed dual-clutch automatic. Note that this is one more gear than you get in Ferrari’s other current offerings and that this is the first midengine Ferrari with all-wheel drive (AWD). The EPA hasn’t given fuel-economy figures for the SF90, and few owners will care, but the car can travel up to 16 miles on electric power alone.

Getting from 0-to-60 mph takes just 2.5 seconds, and the SF90 will top out at 211 mph. An available Assetto Fiorano package reduces weight from the SF90 and adds a carbon fiber rear lip spoiler, upgraded shocks, and stickier tires.

Other options include carbon fiber wheels and titanium exhaust tips, but any version of the SF90 is a seriously potent and track-capable car. Ferrari claims the SF90’s shape will generate up to 860 pounds of downforce, and for an AWD hybrid the SF90 is impressively light. In large part thanks to its carbon fiber and aluminum chassis, it weighs a little over 3,500 pounds, nearly 600 of which come from the hybrid system, according to Ferrari. Drivers can select between eDrive (electric only), Hybrid (default), Performance (V8 always on), and Qualify (maximum power) driving modes.

The inside of the SF90 features a fascinating 16-inch curved digital instrument cluster that displays both infotainment features and all relevant driver information. A secondary display in front of the passenger, now a common option on other Ferraris, also shows some telemetry info like speed and cornering forces. Daytona-style seats and extra carbon fiber interior trim are on the options list.

Blisteringly quick, dramatically styled, and at the cutting edge of automotive technology, the SF90 seems more than worthy of the badge on its nose and its monumental price tag. While it hasn't had as much impact on the automotive landscape as the LaFerrari hybrid did a few years back, it’s still one of the most desirable and exotic cars on the market today.

Mortavius Ferrari is a harp in a band of trumpets...love em all!

Have you driven a 2020 Ferrari SF90 Stradale?
Rank This Car

Looking for a Used SF90 Stradale in your area?