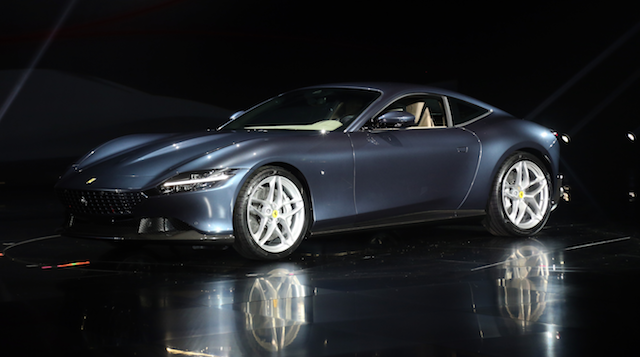 For 2020, Ferrari introduces a new model, called the Roma. Named after Italy’s capital city, the latest Ferrari GT car shares a platform with the Portofino convertible but features graceful new bodywork and a new interior. The Roma shares just 30 percent of its parts with the Portofino. It will compete with the likes of the Aston Martin DB11, Porsche 911 Turbo, and McLaren GT.

Mounted in front of the driver but set far back in the chassis of the Roma is Ferrari’s 3.9-liter twin-turbocharged V8, rated at 612 horsepower and 560 pound-feet of torque. The 8-speed dual-clutch automatic also found in the upcoming SF90 Stradale plug-in hybrid does the shifting. Ferrari claims the Roma will do 0-62 mph in 3.4 seconds and go on to a top speed of 198 mph. The Roma weighs less than the Portofino and has an active rear wing for extra downforce when needed.

The exterior of the Roma is a bit of a departure from other cars in the current Ferrari lineup with its body-color grille, flush door handles, and prominent bottom lip, but it’s still instantly recognizable as a Ferrari. It’s the same story on the inside. With plenty of leather, a Manettino switch on the flat-bottom steering wheel, and of course the prancing horse on the badge, the Roma lets you know that you’re driving a Ferrari. With a sweeping dashboard and tall center console, each front passenger is nestled into an enveloping, but not cramped, space. Ferrari calls it the “Dual Cockpit” concept. A 16-inch digital gauge cluster features screens flanking a central tachometer, and an 8.4-inch touchscreen sits in the middle of the dashboard. The front passenger, meanwhile, gets his or her own separate screen. The Roma technically has back seats, but they likely won’t be suitable for anyone larger than a young child. Trunk space, meanwhile, is a good but unexceptional 12 cubic feet.

The Roma is an elegant, clean, and fresh design from Italy’s most-famous carmaker. It is also a welcome addition to Ferrari’s lineup since a smaller, less expensive fixed-roof GT has been absent from the lineup. It will hit showrooms in 2020.

Have you driven a 2020 Ferrari Roma?
Rank This Car