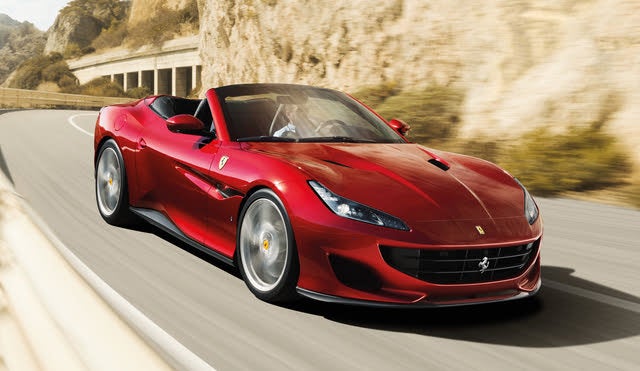 Looking for a Used Portofino in your area?

Ferrari unveiled its successor to the California, called the Portofino after an Italian village of the same name, in 2019. Like the old California, the Portofino serves as Ferrari’s entry-level GT and features a retractable hardtop roof, seats in the back, and a potent V8 in front of the driver. Since the Portofino is just entering its second model year, it unsurprisingly goes into 2020 without major changes.

Sitting in front of the driver in the Portofino is a 3.9-liter twin-turbo V8 rated at 591 horsepower and 561 pound-feet of torque, driving the rear wheels via a 7-speed dual-clutch automatic transmission. While it is an entry-level model, the Portofino is still a Ferrari and still extremely quick. The sprint to 60 mph takes a little over 3 seconds, and top speed is just shy of 200 mph. Expect unremarkable fuel economy of 16 mpg city, 22 highway, and 18 combined. It isn’t just quick between the traffic lights, either, as the Portofino features the magnetorheological dampers found across the Ferrari range, and its aluminum chassis is reportedly 35 percent stiffer than the old Ferrari California T's. The driver can also adjust the shocks depending on his or her mood, allowing the Portofino to be both a boulevard cruiser and a canyon carver.

Inside, the instrument cluster blends old and new with a large, brightly colored analog tachometer flanked by digital instrument displays. The center of the dashboard is dominated by a 10.2-inch touchscreen that runs Ferrari’s latest infotainment system and supports Apple CarPlay.

The Portofino has rear seats, and there’s more room back there than in the old California, but it’s still a tight space best suited for kids or short trips. The power-retractable hardtop, meanwhile, raises or lowers in 14 seconds at speeds up to 25 mph, and trunk space is a usable 10.2 cubic feet with the hardtop raised.

The Portofino is, aside from the GTC4Lusso hatchback, the most versatile car in the Ferrari range. It can be a comfortable long-distance cruiser with the roof up. It can also quickly shuffle kids or a couple of friends in between destinations. When the weather is nice, it’s a sexy convertible. And when you feel like driving hard, the Portofino has all the performance and all the features necessary for a track day or even just a blast through the back roads. It’s not alone in the world of expensive and fast convertibles, however. Buyers interested in the Portofino might also consider the open versions of the Bentley Continental GT or the Mercedes-AMG GT. The Aston Martin DB11 Volante is another tempting alternative, as are the higher-spec versions of the Porsche 911 Cabriolet.

What's your take on the 2020 Ferrari Portofino?

Have you driven a 2020 Ferrari Portofino?
Rank This Car

Looking for a Used Portofino in your area?