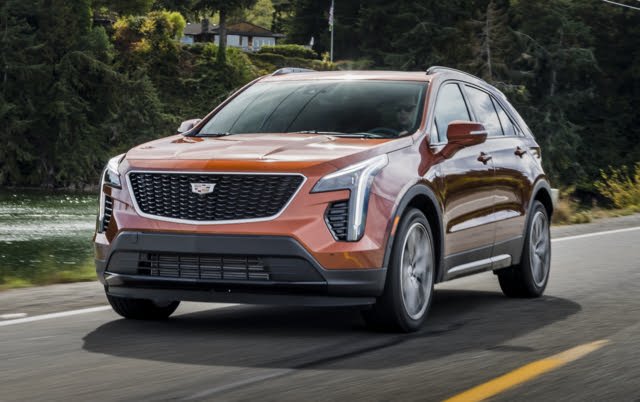 Looking for a New Cadillac XT4 in your area?

Average user score
4.8 ⁄ 5 stars
Based on 4 reviews
Review by Jtaydus — I am 65 and have been buying cars for 50 years. I have owned American, Japanese and German cars. I ABSOLUTELY love everything about the CADILLAC XT-4. The controls are logical and not overdone like ... Read more
Review by GuruJKWHJ — clean sporty stylish economic looks like this is a great performance vehicle Read more
Review by 911dispatcher — I love the body style and features on this model Read more

The 2020 Cadillac XT4 is stylish, comfortable, useful, enjoyable to drive, and easy to like. It lacks only refinement, attention to detail, and added value in order to stand out from a sizable crowd of competitors. 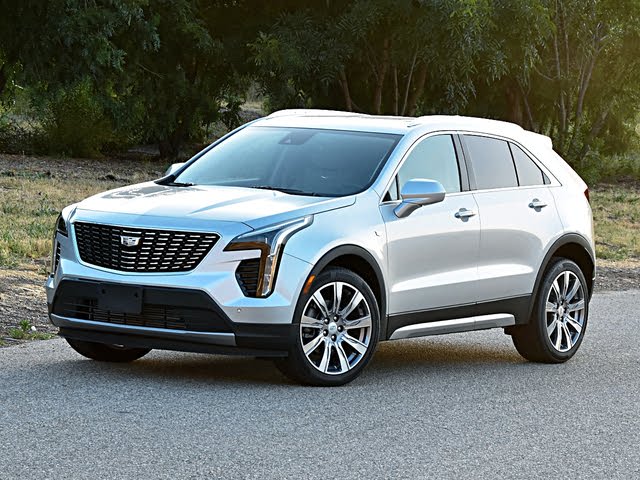 Two decades ago, the idea of a Cadillac SUV was nothing short of crazy, especially because the first-ever Escalade was literally identical to a GMC Yukon Denali but with wreath-and-crest badges on it. Now, however, Cadillac sells four better-distinguished SUVs in various sizes and at various prices—including the Escalade. The 2020 Cadillac XT4 is the least expensive member of the quartet, small in size but big in personality. 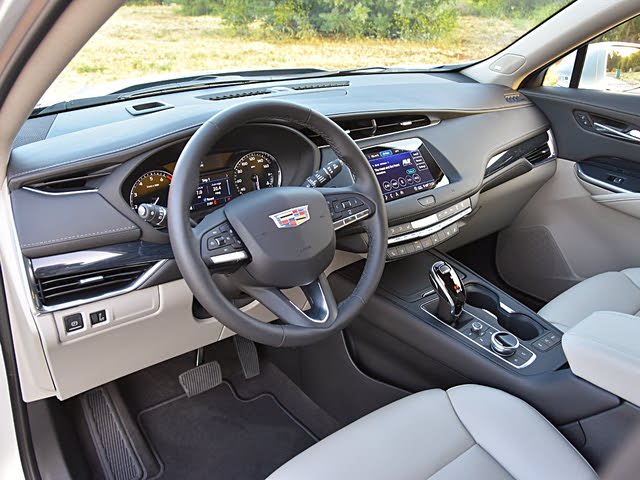 Cadillac employs what it calls a “Y” trim level strategy for its vehicles. They come in standard Luxury trim, and from there you can upgrade to Premium Luxury or Sport trim.

Especially when it has 20-inch alloy wheels, the XT4 might just be the most visually appealing Cadillac crossover. It has a crisp, tailored styling with proper proportions aside from excessive front overhang, which is tough to avoid when building on a front-drive platform.

The interior is pleasant, too, and for the most part, Cadillac uses materials of a competitive quality in this vehicle’s cabin. There are some missteps, however, such as the plain black trim surrounding the power window controls, which looks like it belongs in a Chevy, not a Caddy. However, most small luxury SUVs exhibit similar quality shortcuts. 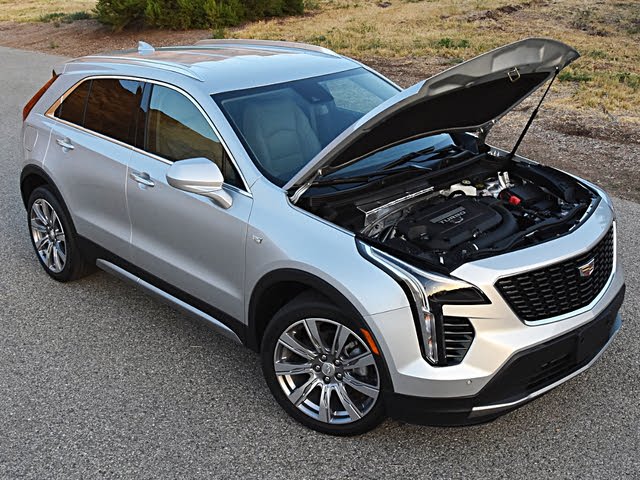 A turbocharged 2.0-liter four-cylinder engine powers the Cadillac XT4, and it feels stronger than its official power ratings suggest. It generates 237 horsepower and 258 pound-feet of torque, the latter available from 1,500 rpm to 4,000 rpm. A nine-speed automatic transmission powers the front or all four wheels, and the EPA says a FWD XT4 should get fuel economy of 26 mpg. Our test vehicle returned 24.8 mpg.

The fat band of torque is what gives the XT4 its lively driving character, but you might want the optional twin-clutch all-wheel-drive (AWD) system in order to limit front-wheel slip and torque steer, both of which are problems with FWD.

A nine-speed automatic transmission is standard, supplying smooth shifts. But when you press harder on the accelerator, such as when coming out of a curve or a corner, it is hesitant to downshift when you’re driving in Tour mode. This remains a problem after you switch to the Sport drive mode, albeit a less frequent one. Paddle shifters mounted to the steering wheel offer one way to solve this delayed downshift issue. But since the driver can barely perceive the gear changes they execute, it’s hard to tell if they’re actually doing anything.

Cadillac needs to better isolate the XT4’s interior from engine and road noise. The turbocharged 2.0-liter doesn’t sound particularly refined, and the 20-inch wheels deliver a steady stream of surface sizzle to the cabin. Some people won’t mind this level of communication from the road, but it certainly doesn’t impart a sense of luxury.

As far as ride and handling go, the XT4 is a mixed bag. Steering effort feels good in Tour mode, but in Sport mode, it adopts an artificially heavy sensation.

An adaptive damping suspension is offered with the XT4 Sport, and Cadillac should extend its availability to Premium Luxury trim. The standard underpinnings do not handle speed humps well and allow too much excess body movement when driving with zeal on a country road. At the same time, the suspension doesn’t soak up the smaller bumps and holes in the pavement, which are no doubt amplified by the big wheels and tires.

Speaking of which, the oversized rubber offers impressive grip, and because the XT4 suffers little in the way of body roll, this Cadillac SUV can be fun to toss around on perfectly smooth pavement. And the brakes work well, so if that perfectly smooth pavement runs downhill, like the Dennison Grade into Ojai, California, you’ll have a good time driving the XT4 Premium Luxury. 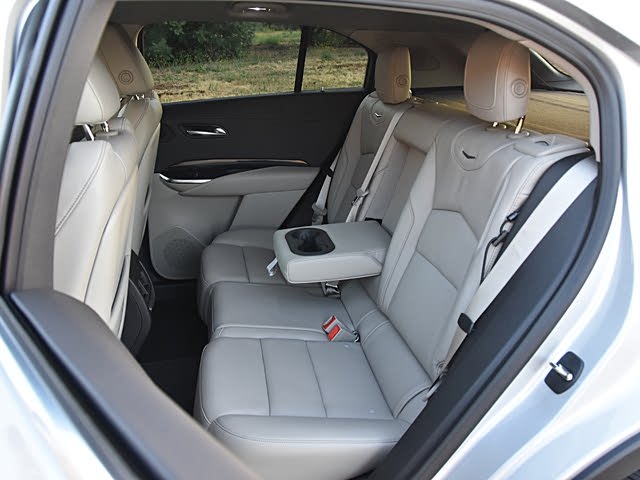 If the XT4’s standard suspension needs sorting and too much noise makes its way into the cabin, at least the driver and front passenger will be comfortable. The test vehicle had soft leather, densely padded armrests, padded center console sides, and heated, ventilated, and massaging driver's seat and front-passenger seat. The too-skinny steering wheel also offered heating.

Heated back seats and rear air conditioning vents were also present in our test vehicle, and the XT4’s rear passenger compartment feels roomier than what’s provided in many small SUVs. Despite the legroom, the rear seat cushion is rather flat and lacking in terms of support.

The Cadillac XT4’s excellent air conditioning system is worth noting. Tested during a Southern California heatwave, the XT4’s AC rapidly cooled the SUV’s interior and kept it that way. Ultimately, it got so cold inside that it was necessary to bump the dual-zone automatic climate control system’s temperature into the mid-70s in order to ward off the chill.

The climate controls are elegantly arranged in a row beneath the infotainment system screen, a layered mix of buttons and metallic piano key tabs. In spite of the XT4’s clean, minimalistic interior aesthetic, there is no shortage of storage space within this Cadillac cabin—something that cannot be said for some of its direct competitors. From umbrella holders in the front door panels to an innovative angled wireless smartphone charger, you’ll find a place to put things in this SUV.

At the same time, the XT4 might not be able to satisfy larger cargo carrying requirements. Behind the rear seat in this little luxury crossover, cargo space amounts to 22.5 cubic feet. Fold the back seat down, and you can carry 48.9 cubic feet of cargo. A hands-free power liftgate is available. 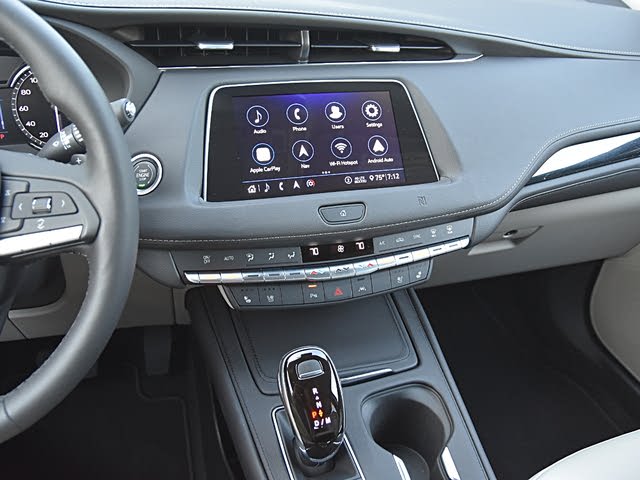 Years ago, Cadillac tried to be a first-mover in technology by putting touch-sensing controls in its vehicles. Embedded into glossy black plastic, the haptic-feedback buttons, combined with slow reaction times from the touchscreen infotainment system, forever frustrated people attempting to use the Cadillac User Experience (CUE) system.

Those days are over. The latest version of CUE is much easier and satisfying to use, and our test vehicle included Apple CarPlay, Android Auto, a WiFi hotspot, Cadillac Connected Access services, and near-field communication pairing to Bluetooth for two different devices.

There are multiple ways to interact with CUE. The 8-inch display is a touchscreen, there are intuitive controls on the center console and steering wheel, and a voice-recognition system stands ready to interpret and act upon commands. But, as is true of many aspects of the Cadillac XT4, there is room for improvement.

First, the screen needs to be larger. This is a luxury vehicle, after all. Second, Cadillac should tie the climate system into the voice-recognition system, which works well the majority of the time. Third, while it’s easy to acclimate to the center console controls, adding topographic reference points would make it easier to operate them without looking down.

As far as the stereo is concerned, the optional 13-speaker Bose Centerpoint surround audio system produced a satisfying listening experience. The test car did not have some of the other technology features offered for the XT4, including a head-up display (HUD) or a rear camera mirror showing a 180-degree live video feed of what’s behind the SUV. 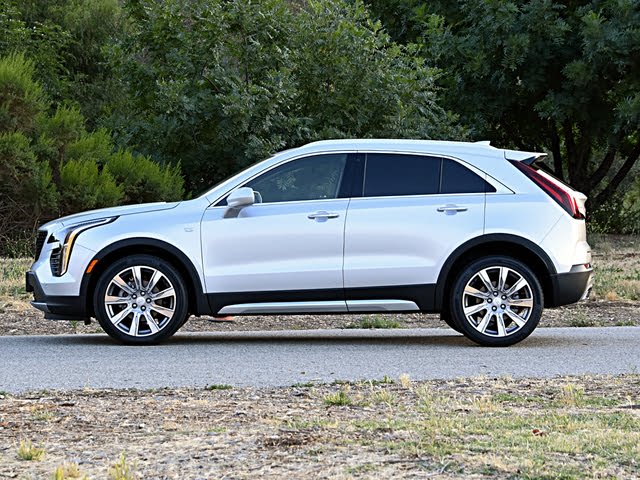 This reflects what our test vehicle had, and yes, it does seem odd that a $45,000 luxury SUV did not include adaptive cruise control. For that, you need the Driver Assist Package, which also comes with high-speed automatic emergency braking and reverse automatic braking.

A new rear pedestrian alert system is available for 2020, but to get it, you must option the XT4 with the Enhanced Visibility Package. That upgrade also includes the rear-view camera mirror, a surround-view camera system, and a semi-autonomous parking assist system.

Given our vehicle’s specification, the only tech we could test was the lane-keeping system, which proved hit-and-miss in terms of its effectiveness, so pay attention.

If a collision occurs, the XT4 supplies 5-star protection according to the National Highway Traffic Safety Administration (NHTSA). The Insurance Institute for Highway Safety (IIHS) hasn’t completed all testing of the XT4 but does give the SUV Good ratings for moderate-overlap frontal-impact and side-impact protection. 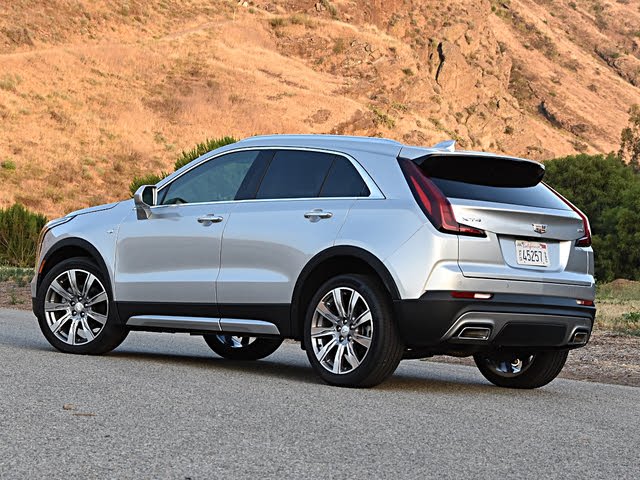 Beginning with the understanding that choosing a brand-new luxury vehicle is never a cost-effective path to solving your transportation needs, you should rightly expect that the MSRP will get you more than just the cachet conveyed by whatever badge is on the grille.

With the Cadillac XT4, ownership benefits include a 4-year/50,000-mile bumper-to-bumper warranty with 6-year/70,000-mile powertrain and 24-hour roadside assistance coverage. The SUV also includes between six months and two years of free connected services, and three months or 3GB of free WiFi. Your first maintenance visit is also on the house, and if your XT4 needs repair a courtesy transportation and expense reimbursement plan is in place.

That sounds pretty good, doesn’t it? Well, this amounts to "average" among luxury brands. And just remember that if you want any color other than Radiant Silver, it’s gonna cost you at least $625 extra.

As far as the competition is concerned, there is no shortage of alternatives to the Cadillac XT4, and they range from the Acura RDX to the BMW X1 to the Volvo XC40. Nearly every luxury brand makes a small crossover SUV, and some mainstream brands like Mazda can match the Cadillac’s quality, style, and performance for much less.

Nevertheless, all things considered, the XT4 is quite likable despite its flaws. This vehicle has personality, a trait increasingly absent from many vehicles that are honed to anonymous perfection. With some added attention to detail, additional refinement, and more value baked into the price tag, it would be easier to recommend.

DarkJaeger I like the XT4 and have cross shopped other SUVs but I would think comparable alternatives would be Audi Q5, Acura RDX, BMW X3 and Volvo XC60 based on their size and class, not the X1and XC40 referenced.

Have you driven a 2020 Cadillac XT4?
Rank This Car

Enter your zip to see incentives for a new XT4 in your area.

Looking for a Used XT4 in your area?

What Grade Of Gas To Use