Looking for a Used Encore GX in your area? 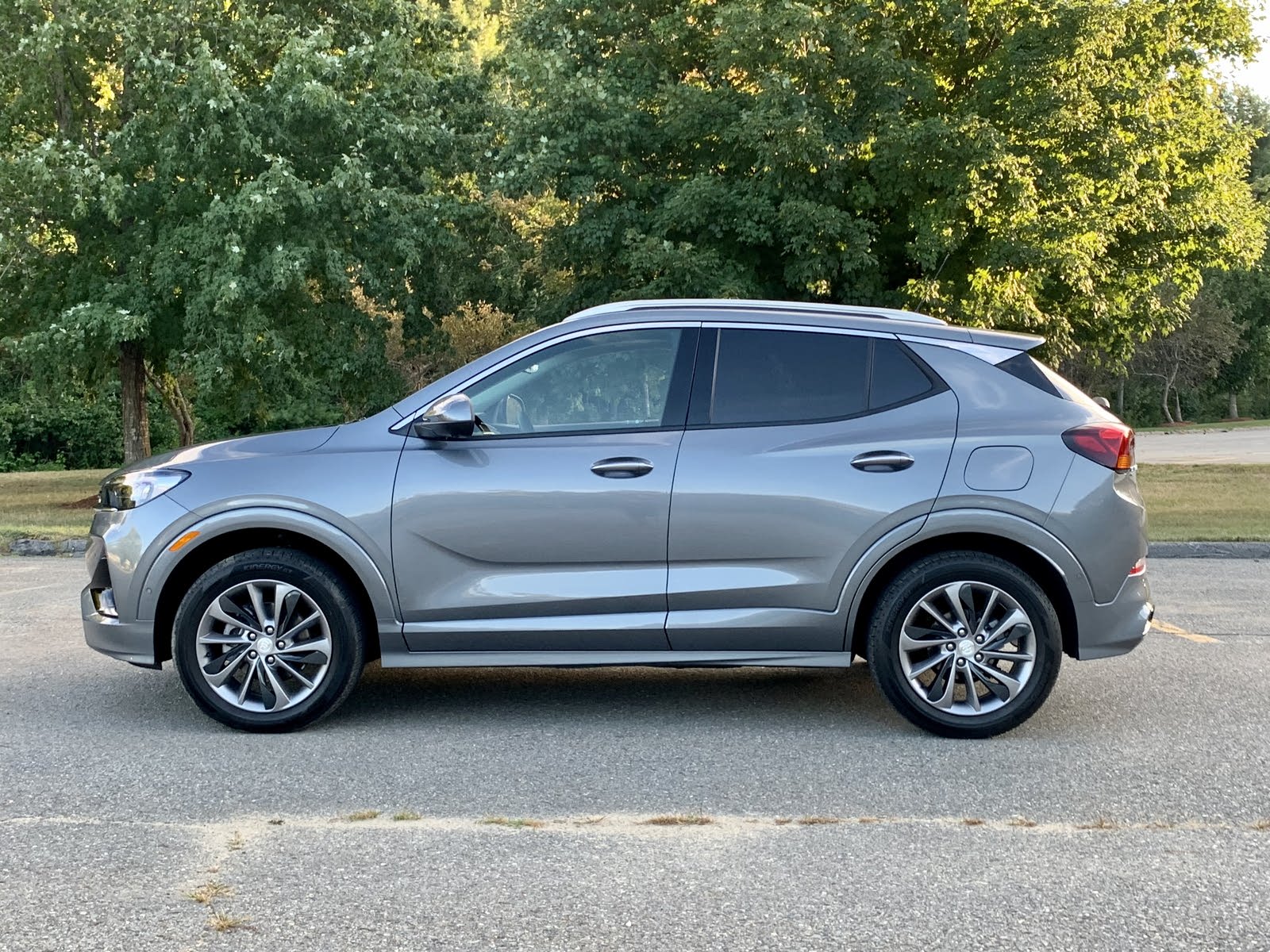 At first glance, one might suspect the 2020 Buick Encore GX is just the range-topping trim of the Buick Encore, a subcompact SUV. But closer examination reveals that it's a slightly larger, more upmarket small crossover. It has a longer wheelbase and heavily revised bodywork. But most crucially, it has more interior space and more powerful engines, which address the two biggest critiques of the Encore.

The Encore GX has a higher base price than the non-GX Encore, which then invites tougher competition. Starting at more than $25,000 brings it against some seriously competent small SUVs, such as the Mazda CX-30 and Hyundai Kona. So, should Buick be careful what it wished for by creating a better—but more expensive—Encore? 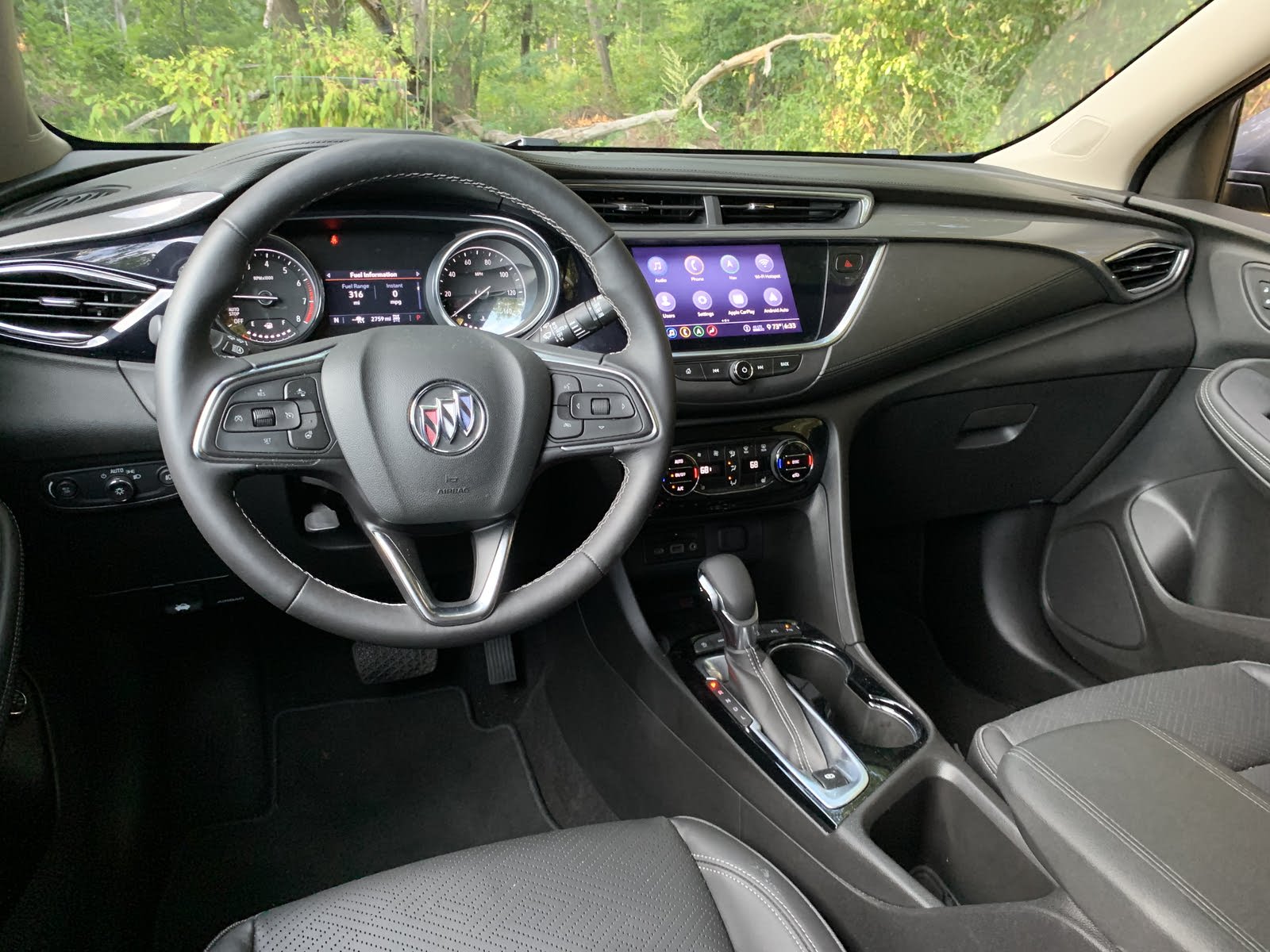 The Encore GX is slightly larger than the Encore in nearly every aspect. It’s 2.7 inches longer, 1.3 inches wider, and 1.8 inches taller. It has a 1.6-inch longer wheelbase, and a wider front and rear track. Buick put a surprising amount of effort into revising the exterior styling of the GX. It has a much larger grille, revised headlights and twilights, and a completely reworked rear end. Where the Encore has a stubby, notchy look, the Encore GX has a more mature and complete overall appearance.

That more mature styling translates into the cabin of the Encore GX. At first glance, the cabin looks similar to that of the smaller Encore, but closer examination reveals a tremendous amount of care, style, and fit and finish. Though not as upscale as the interior of the new Mazda CX-30, it does feel nicer than that of the Hyundai Kona, which is itself a great place to sit.

Trim levels for the Encore GX are Preferred, Select, and Essence. Standard features on the Preferred includes 18-inch aluminum wheels, heated power-adjustable side mirrors, LED daytime running lights, and fog lights. Other standard features on the Preferred includes remote keyless entry, push-button start, automatic climate control, and a touchscreen infotainment system with Apple CarPlay and Android Auto. The Preferred also comes with a full suite of driver assistance features, which we cover in the “Safety” section of this review.

The range-topping Essence adds unique front and rear chrome bumper accents, LED head- and taillights, a leather-wrapped steering wheel, leather seating, and a 120-volt wall-style power outlet. It also has an eight-way power-adjustable front passenger seat, but it's missing one of the few power adjustments that really matter—adjustable seatback. Buick says the front passenger seat folds completely flat forward, but that hardly makes up for a manual seatback adjustment on the top-tier trim.

Our Essence test vehicle also featured the ST package. The “ST” stands for “Sport Touring,” represented by an appearance package. It includes a unique grille, unique 18-inch wheels, a sporty lower front spoiler, side skirts, and extended rear bumper. The red accents work well with the body kit and give the GX ST a premium look. 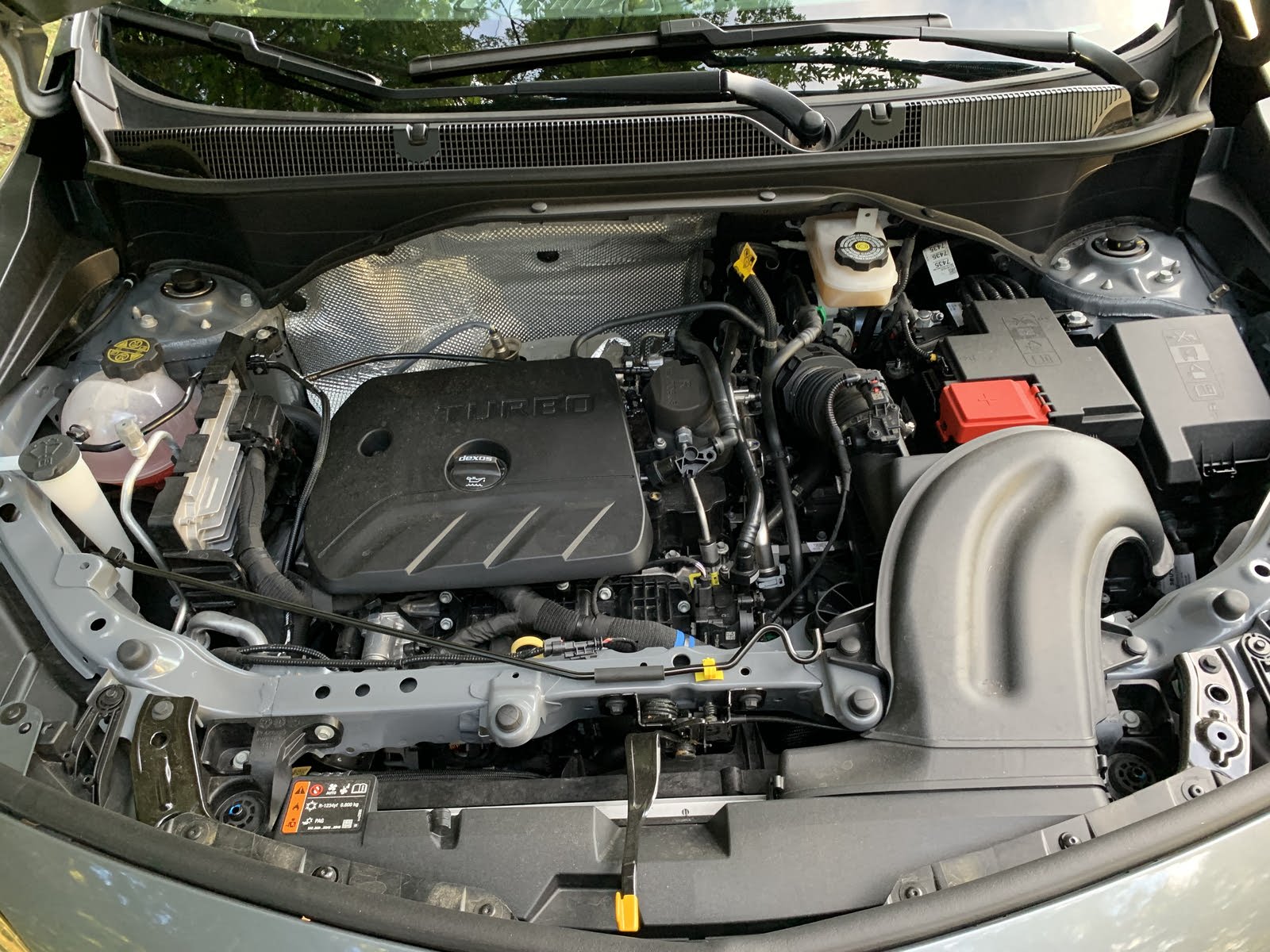 The Encore GX comes standard with a 1.2-liter turbocharged three-cylinder engine. It makes 137 horsepower and 162 pound-feet of torque. The front-wheel-drive (FWD) powertrain operates through a continuously variable automatic transmission (CVT).

Our test model came with the 1.3-liter turbocharged three-cylinder engine. It makes 155 hp and 174 lb-ft of torque, sent through a CVT to the front wheels. It can be had with all-wheel drive (AWD), routed through a nine-speed automatic transmission. AWD drops torque to 162 pound-feet. This engine is an option unless you select the AWD drivetrain, at which point it comes standard.

The 1.3-liter makes solid power for its size. It’s never brisk, but confident. Three-cylinder engines by their nature are a bit rough, and this is the case in the Encore GX. It rumbles as the nine-speed automatic searches for the most efficient gear. It feels bogged down at times until you lay on the accelerator pedal, at which point the engine nears its peak power at 5,600 rpm. Though quick enough to get up to highway speeds, it feels underwhelming on the low-end. The auto-stop/start system is pretty seamless, but it would be imperceptible if paired to a smoother powerplant.

Despite the occasional vibrations from the engine, the overall driving experience is smooth. The steering is responsive and well-weighted, but never dull. The suspension soaks up bumps and potholes nicely, but never feels too soft. Perhaps the biggest surprise is the Encore GX’s composure and handling at higher speeds. Around an onramp or offramp, the GX is level. It’s never sporty, but it allows you to take corners with confidence. Perhaps this is because the bar with the Encore is so low, but when it comes to handling, Buick’s self-ascribed “near-luxury” label finally starts to apply 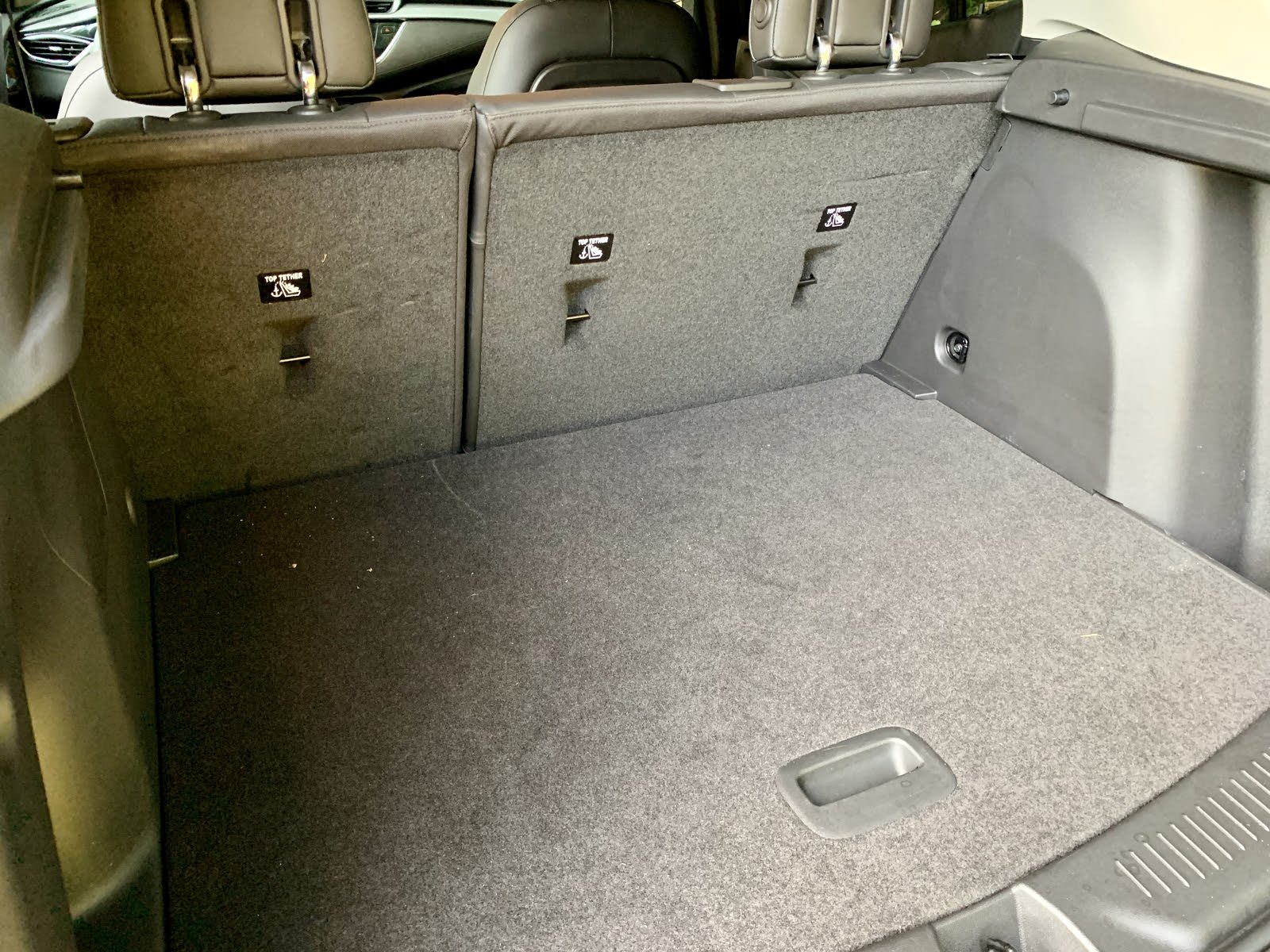 Most of the added space of the Encore GX is found in the rear seats and cargo area. For starters, the rear doors are larger, as is the rear seat's legroom and headroom. It’s really what brings the GX into any serious contention with the other SUVs we’ve mentioned.

The added rear legroom also means you don’t have to slide the front seats up to fold the rear seats down. There is a quick-flip button in the rear headrests to ensure you can lower the rear seats without obstruction. Another neat trick is in the rear load floor. Small dividers can be removed that allows the owner to actually lower the floor, opening up more space.

In our week with the Encore GX, we enjoyed a golf outing with three family members. Three full-size golf bags and their owners all fit in the Encore GX with room to spare. Try doing that in the non-GX Encore!

Up front, the shifter has been moved to the left of the center console, and the cup holders have been moved up to be parallel with it. This creates additional trays and cubby space. The in-door cubbies are deep and can hold a large water bottle. The cup holders themselves are also designed for large water bottles. The center console compartment is deep, but the space ahead of it created by moving the shift column will actually get more use in everyday driving. 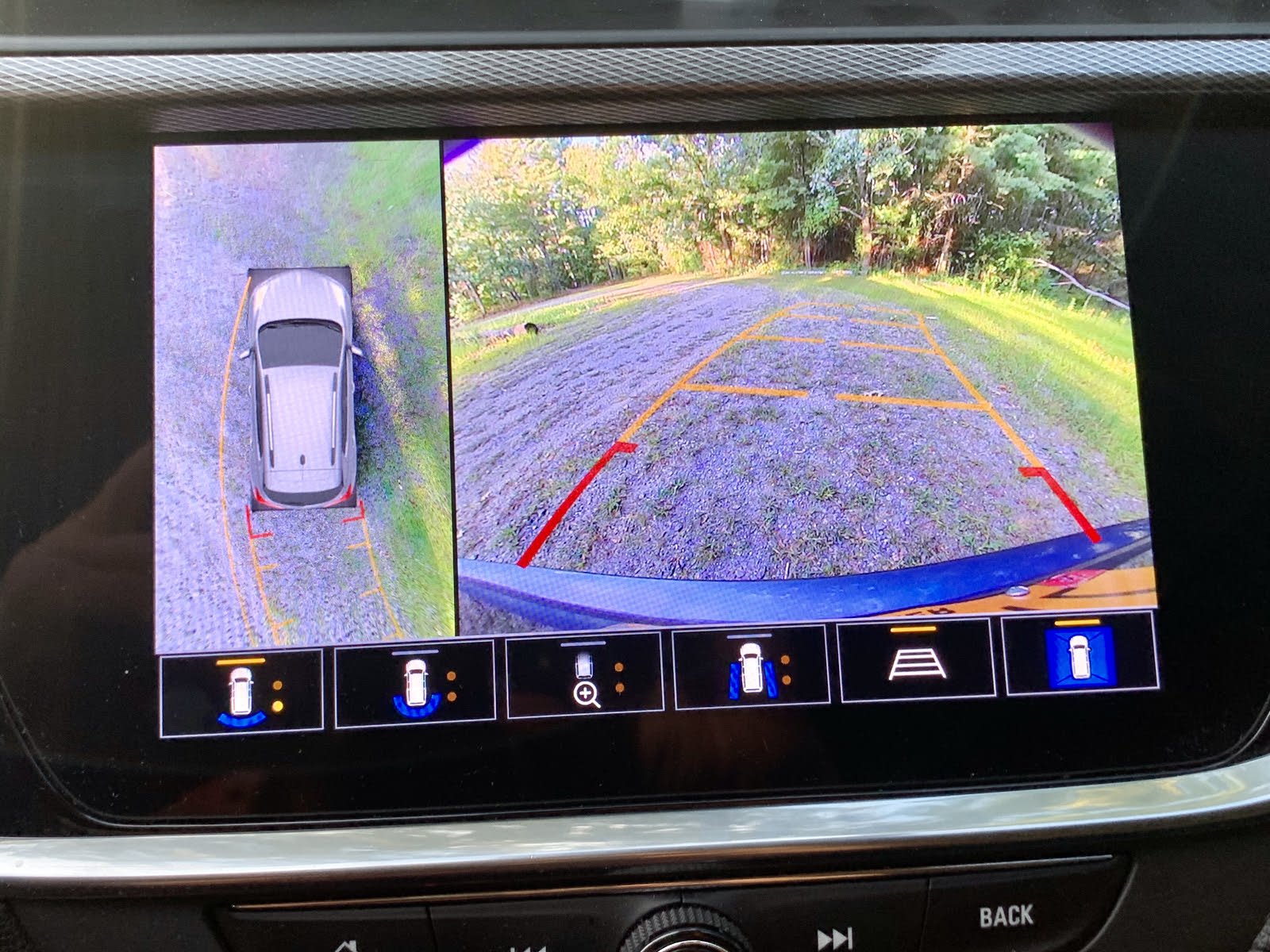 The Encore GX comes standard with GM’s latest touchscreen infotainment system. It has a similarly intuitive layout to previous iterations of the automaker family’s software. The graphics are crisp and the system is responsive, with no observed hiccups. The main menu items can be dragged and dropped in any order to suit your needs. One neat feature is the presets, which can hold contacts and addresses, as well as AM/FM/XM satellite radio presets. This system also comes standard with Bluetooth connectivity, Apple CarPlay and Android Auto.

Options include a wireless charging pad, navigation, and the rear camera mirror. Our test car came with the available head-up display, or HUD. In some cars, the HUD projects directly onto the windshield, but in the Encore GX (and some others on the market), it is projected via a small plastic display that deploys from the dash. For the automaker, this is a cost-cutting move so that they don’t have to run two different types of windshields in the assembly line. An HUD typically requires a different windshield with a laminate to reflect the image. In this case, the little projector might make you feel like a fighter pilot, but it is clunky and takes a moment to deploy. 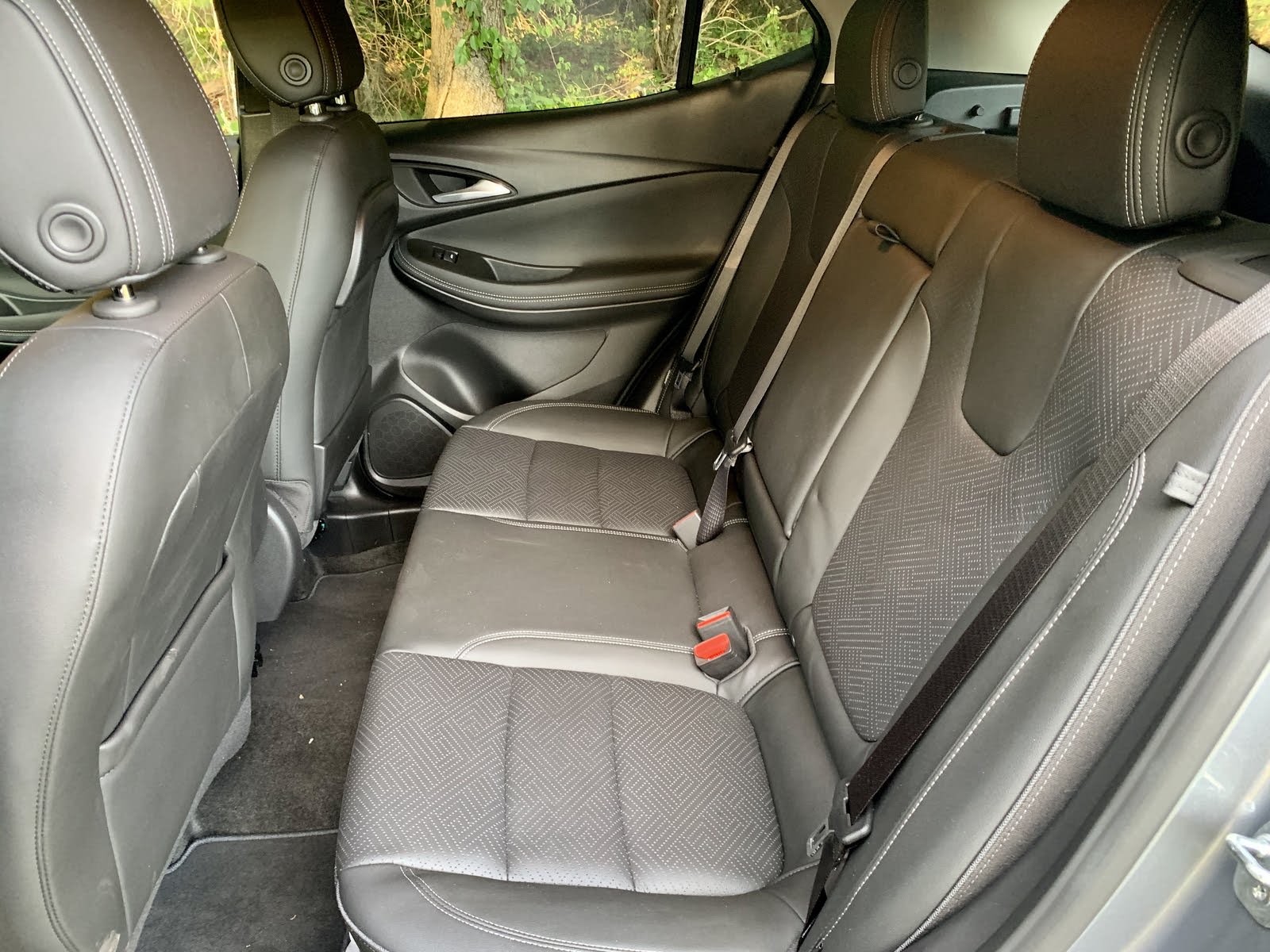 The Encore GX comes standard with forward-collision alert, automatic emergency braking, lane-keeping assist, pedestrian detection, and following distance indicator. It also comes with the Teen Driver System, which allows the owner to set speed and volume limitations for a secondary set of keys.

Optional safety features include blind-spot monitoring with lane change alert, and rear cross-traffic alert. Our test model also came with the available surround-view camera system. It allows the driver to select individual angles. It also automatically switches from backup camera to forward-facing camera when shifting out of reverse at low speeds. This is incredibly helpful when parallel parking, or when pulling up to a perpendicular parking space with a high curb. The cameras are all high-quality and the infotainment display’s high resolution all ensures an incredibly clear picture.

This is all in addition to a standard suite of front and side-impact airbags, traction control, and a tire pressure monitoring system. 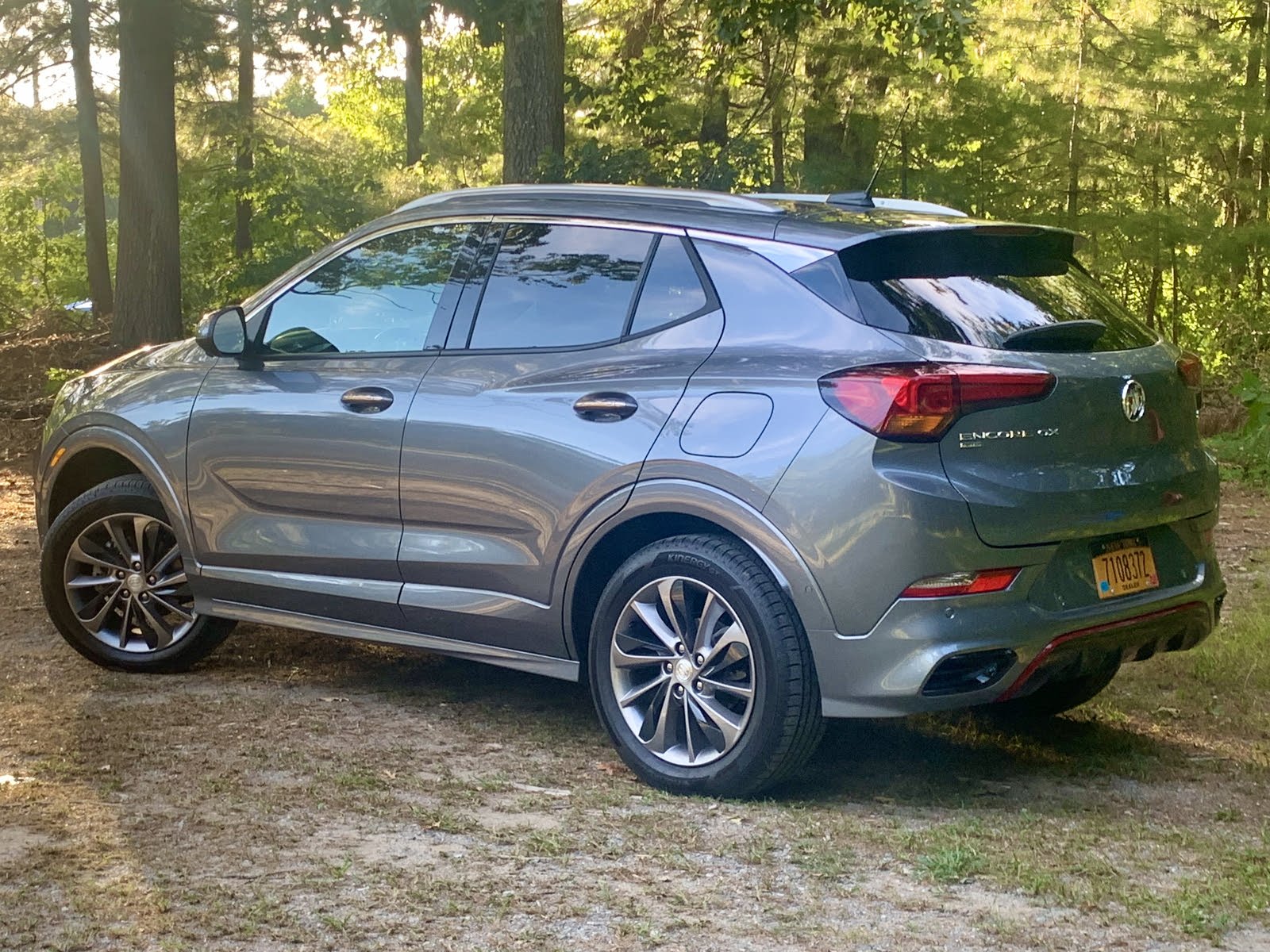 That’s a tremendous price for a subcompact SUV. And that pricing puts it in the crosshairs of some of the small crossovers we’ve mentioned. It should also be noted that the Kia Seltos is another fantastic subcompact crossover that has a lower starting price. A range-topping Kia Seltos SX comes standard with many of the features that cost extra on the Encore GX Essence. The Encore GX is overpriced, no doubt about it, but Buick did the right thing by elevating what the Encore could be with the GX

Mrzacmac Seem the right size just hope it is not made in China like the Envision.

Guru99WQLM Driving one as a loaner while my truck is in the shop. Never imagined I would like a front wheel drive car, especially with a three cylinder engine, but this thing is pretty sweet.

Eric I had this car for 2 months now. The more I drive it the more i like it. A lot more interesting then the Honda or Toyota comparable competition .

Have you driven a 2020 Buick Encore GX?
Rank This Car

Looking for a Used Encore GX in your area?