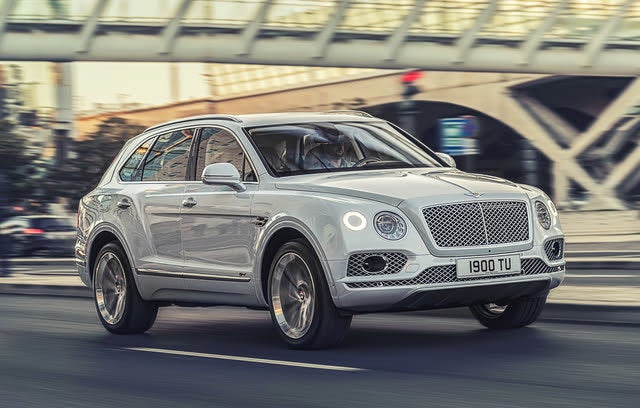 Looking for a Used Bentayga Hybrid in your area?

CarGurus has 4 nationwide Bentayga Hybrid listings and the tools to find you a great deal.

For a company that has traditionally been slow to make changes, Bentley took a big leap with its first SUV—the Bentayga—in 2016. For 2020 Bentley takes another big step forward with the Bentayga Hybrid, the company’s first electrified vehicle. It is part of Bentley’s longer-term plan to have a hybrid version available for all of its models by 2023 and a fully electric model by 2025. Riding on the same platform as the Audi Q8, Lamborghini Urus, and Porsche Cayenne, the Bentayga Hybrid is a plug-in with a permanent magnet synchronous motor, a 3.0-liter V6, and an 8-speed automatic transmission. The non-hybrid Bentayga is still available with the conventional 4.0-liter twin-turbo V8 or the 6.0-liter twin-turbo W12.

The V6 and the electric motor in the Bentayga Hybrid work together to make a total system output of 443 horsepower and 516 pound-feet of torque driving all four wheels. It’s enough to get the 5,800-pound SUV to 60 miles per hour in 5.2 seconds, but it’s also worth noting that this is still the least powerful and slowest model in the Bentayga range. The regenerative braking system has also been criticized for being a bit grabby and taking a while to get used to, but the Bentayga Hybrid is also very quiet when driving under all-electric power and well insulated from the world outside. Bentley says it can travel up to 16 miles on electric power alone, can charge in 2.5 hours on a 240-volt charger or in 7.5 hours on a regular wall outlet, and return 50 miles-per-gallon equivalent. For reference, the EPA estimates the top-spec 600-hp W12 Bentayga will get just 14 mpg combined.

Like any Bentley, leather and premium trim are everywhere in the Bentayga Hybrid, and it offers enough color combinations and types of wood that it would be hard to find two that look exactly alike. And like other Bentaygas, the Hybrid includes an 8.0-inch infotainment touchscreen with gesture control, Apple CarPlay, a WiFi hotspot, and navigation on the dash, while noteworthy options include diamond-quilted seats, massaging front seats, and an 18-speaker Naim stereo.

Other available features on the safety front include night vision, a head-up display, lane-keep assist, and adaptive cruise control, but all Bentaygas come with forward-collision warning, blind-spot monitoring, rear cross-traffic alert, parking sensors, and traffic-sign recognition. The Bentayga is far too expensive for the usual run of crash testing.

Not everyone who buys a Bentley cares about their carbon footprint, but there are those who do, and Bentley is just getting with the times as all major carmakers rush to introduce hybrids and EVs into their lineup. The Bentayga Hybrid further broadens the company’s SUV range and is now the least expensive of the lot.

What's your take on the 2020 Bentley Bentayga Hybrid?

Have you driven a 2020 Bentley Bentayga Hybrid?
Rank This Car

Looking for a Used Bentayga Hybrid in your area?

CarGurus has 4 nationwide Bentayga Hybrid listings and the tools to find you a great deal.