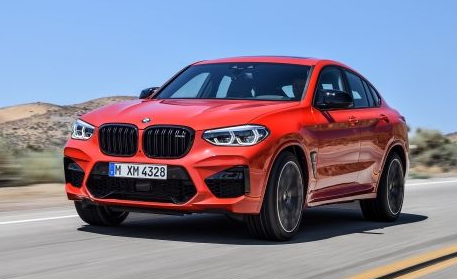 The BMW X4 M features a few updates for 2020. Based on the second-generation X4 that came out for 2018, the new X4 M has a highly potent new straight-six engine. At a glance, it sets itself apart from the standard X4 with a blacked out grille, larger air vents, and a lower ride height. An available Carbon package livens up the look even further with carbon fiber intakes, mirror caps, and rear diffuser.

The new X4 M offers 473 horsepower from its new S58 3.0-liter twin-turbo straight-six. An available “Competition” trim boosts hp to 503, while torque remains the same at an ample 442 pound-feet. Top speed is electronically limited to 155 mph. The sprint from 0-60 mph, meanwhile, takes 4.2 seconds for an X4 M and 4.1 seconds for a Competition-equipped version.

Of course, a proper “M” trim BMW isn’t just about speed in a straight line, so the M division has thoroughly reworked the handling of the X4 as well. The rear-biased all-wheel-drive (AWD) system is borrowed from BMW’s hot new M5 sedan; an electronically controlled limited slip and larger high-performance brakes come standard. Staggered tires are also standard, while larger 21-inch wheels are an available option.

That sloping roofline does ultimately subtract space. Behind the second row is 17.7 cubic feet of space and with the seats folded this expands to 49.4 cubic feet.
The interior isn’t drastically different from an X4, but there is a lot of leather trim as well as a leather-wrapped M steering wheel and shifter. Navigation, power sports seats, a 10.25-inch infotainment touchscreen, a full-color head-up display (HUD), tri-zone automatic climate control, and ambient lighting are all standard. The X4 M Competition adds carbon fiber trim to the door panels and M logos on the seats. No version of the X4 has been put through the usual run of crash tests. Standard safety features include a reversing camera, cruise control, and automatic emergency braking with pedestrian detection. Other available features include adaptive cruise control, active lane control, rear cross-traffic alert, and a surround-view camera system.

The BMW X4 M is the freshest design in the small but competitive compact performance SUV market, but buyers might be tempted away by the Porsche Macan Turbo, Alfa Romeo Stelvio Quadrifoglio, Mercedes AMG GLC63, and top-tier versions of the Jaguar F-Pace.