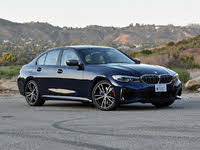 When you love to drive, you need a car that loves to be driven. Put the 2020 BMW 3 Series on your shortlist. 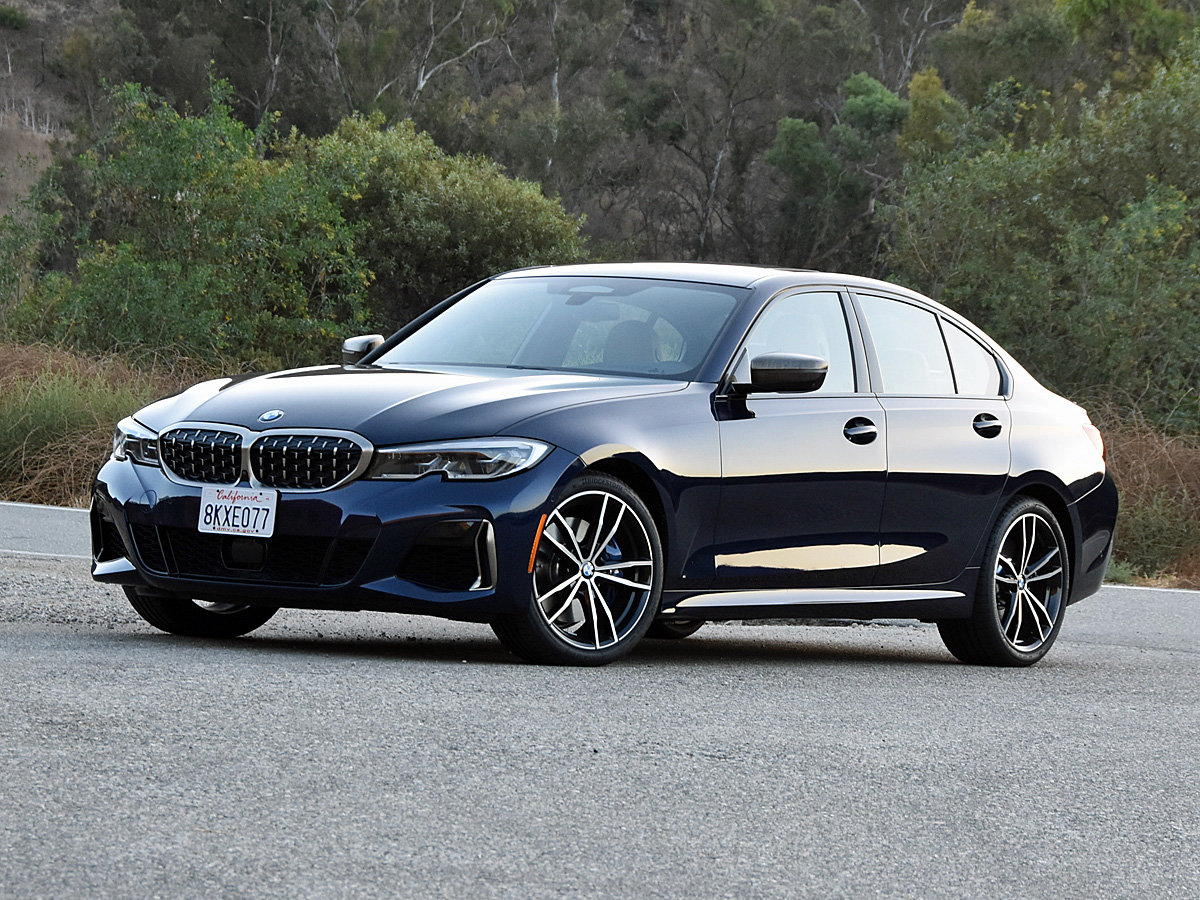 Does BMW still use “The Ultimate Driving Machine” as its advertising tagline? Yes, it does. And with the arrival of the 2020 BMW M340i, which slots between the existing 330i and the forthcoming M3, the company proves there is substance behind the slogan. 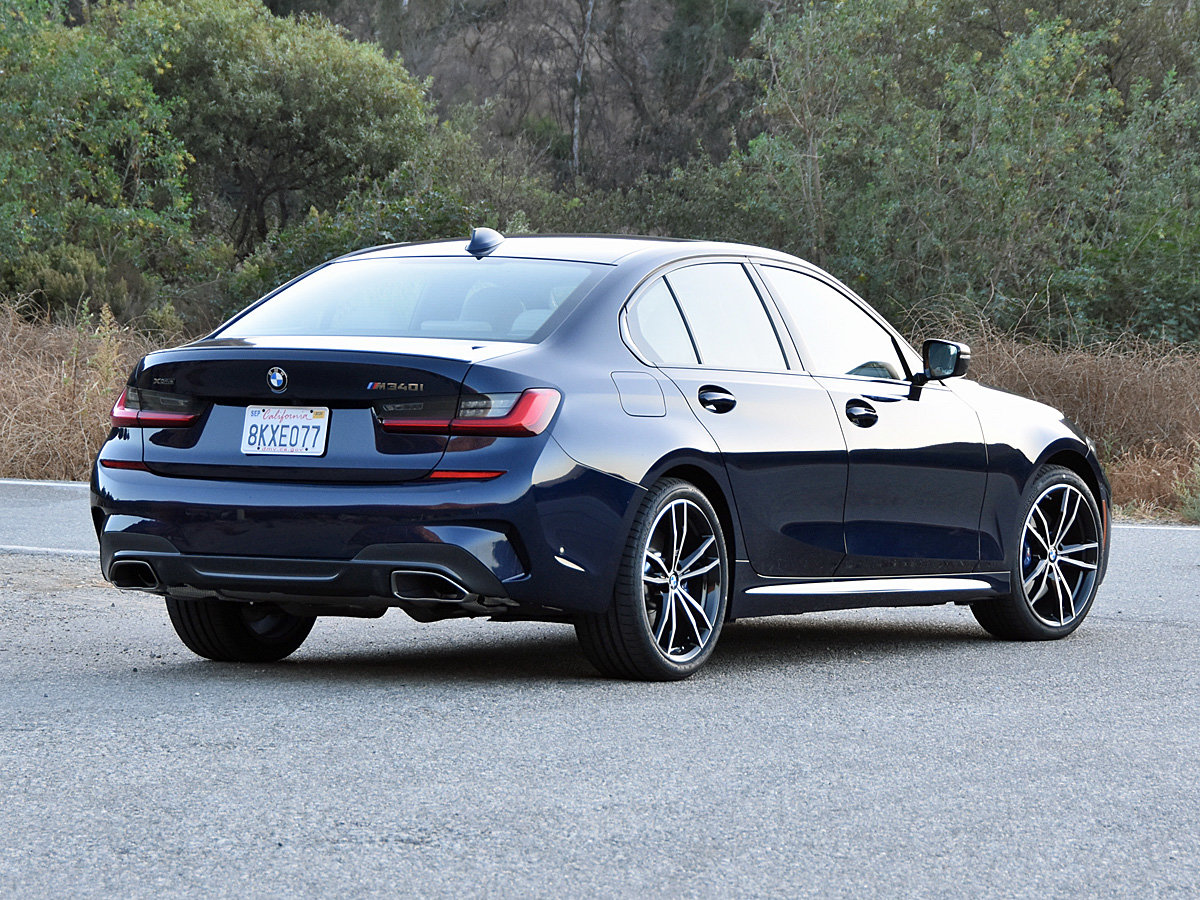 As a younger man, I worked as a deckhand on a whale-watching boat out of Provincetown, Massachusetts. That summer on the Atlantic introduced me to all manner of marine life, and on several occasions, I got up close and personal with the majestic humpbacks that sidled up to the boat as though they were on a people-watching tour.

Something about the new 2020 BMW 3 Series reminds me of those awe-inspiring creatures. Collectively, the lidded headlights, bulging curved hood, wide lower air intakes, and oversize grille give the car an aquatic appearance. And that pretty much wraps up my criticism of the 2020 BMW 3 Series.

Any remaining faults are forgivable because the 3 Series—particularly the new M340i trim—is just so damn glorious to drive.

Having driven a 2019 BMW 330i with the M Sport Package, I’d say most driving enthusiasts would be quite happy with it while saving themselves 10 grand. But if you can afford the added freight, good God the M340i is worth it.

Either way, BMW offers a variety of interior colors and materials to help personalize a 3 Series to your preferences. My test car’s off-white Ivory leather contrasted sharply with the otherwise black cabin and the Tanzanite Blue exterior paint, a $1,950 upgrade.

As purposeful in appearance as always, the interior also looks and feels like BMW is taking quality more seriously, which helps take the sting out of its sticker prices. 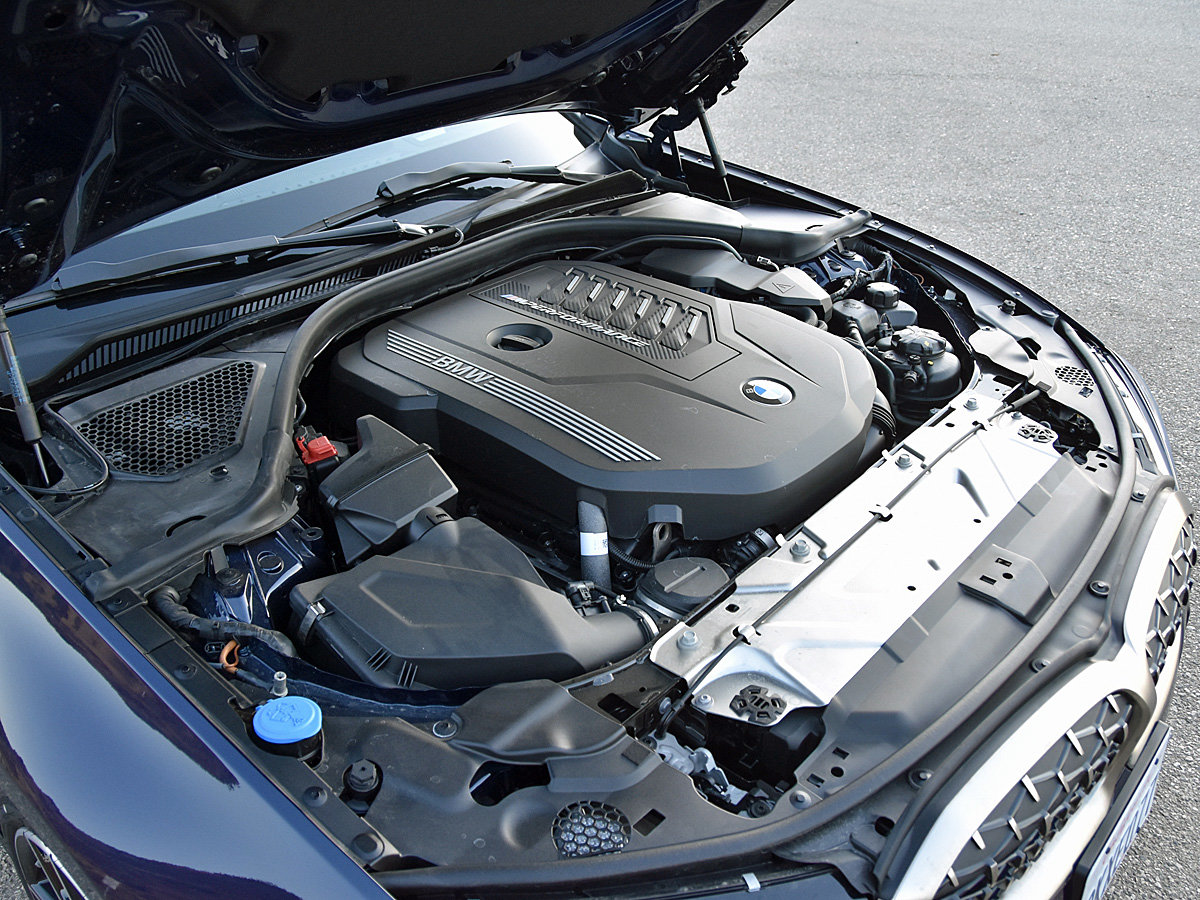 Some people say the previous-generation 3 Series wasn’t up to snuff in the driving dynamics department. That’s only partially accurate.

True, when BMW redesigned the car for the 2012 model year, swapping out the former version’s nearly telepathic hydraulic steering for electrically assisted hardware, the change left something to be desired.

However, BMW resolved that for 2016, redesigning the electric steering and making other modifications designed to make it feel more like BMWs of yore. When I sampled a 340i equipped with the changes, I was back in love with the 3 Series.

And the latest version is even better.

Well, almost any driving enthusiast’s face. There is an elephant in the M340i’s cabin: the standard 8-speed automatic transmission.

So much for saving the manuals, eh?

As a driving enthusiast who has continually owned a stick-shift car since 1986, I accept this. Say what, now?

First, a launch-controlled M340i xDrive rockets to 60 mph in 4.1 seconds, according to BMW. Second, I live in Los Angeles, where traffic is a nightmare. Third, when you’re really hustling in this car, the last thing you need to break your concentration is a botched downshift or missed upshift.

Maybe on a racetrack, I’d feel differently. But in the real world—even on a road you know as intimately as the wrinkles on your face—if you’re coming anywhere close to this car’s limits, you’ll be so focused on the task at hand that the delightful paddle shifters and the expertly calibrated automatic transmission will prove a gift.

Of course, I missed shifting my own gears, especially since BMWs have silky-smooth gearboxes. But in a daily-driven car that encourages taking the long way home from work, the 3 Series M340i’s excellent sport transmission and various driving modes should be enough to ease this potential affront to BMW’s most loyal customers. 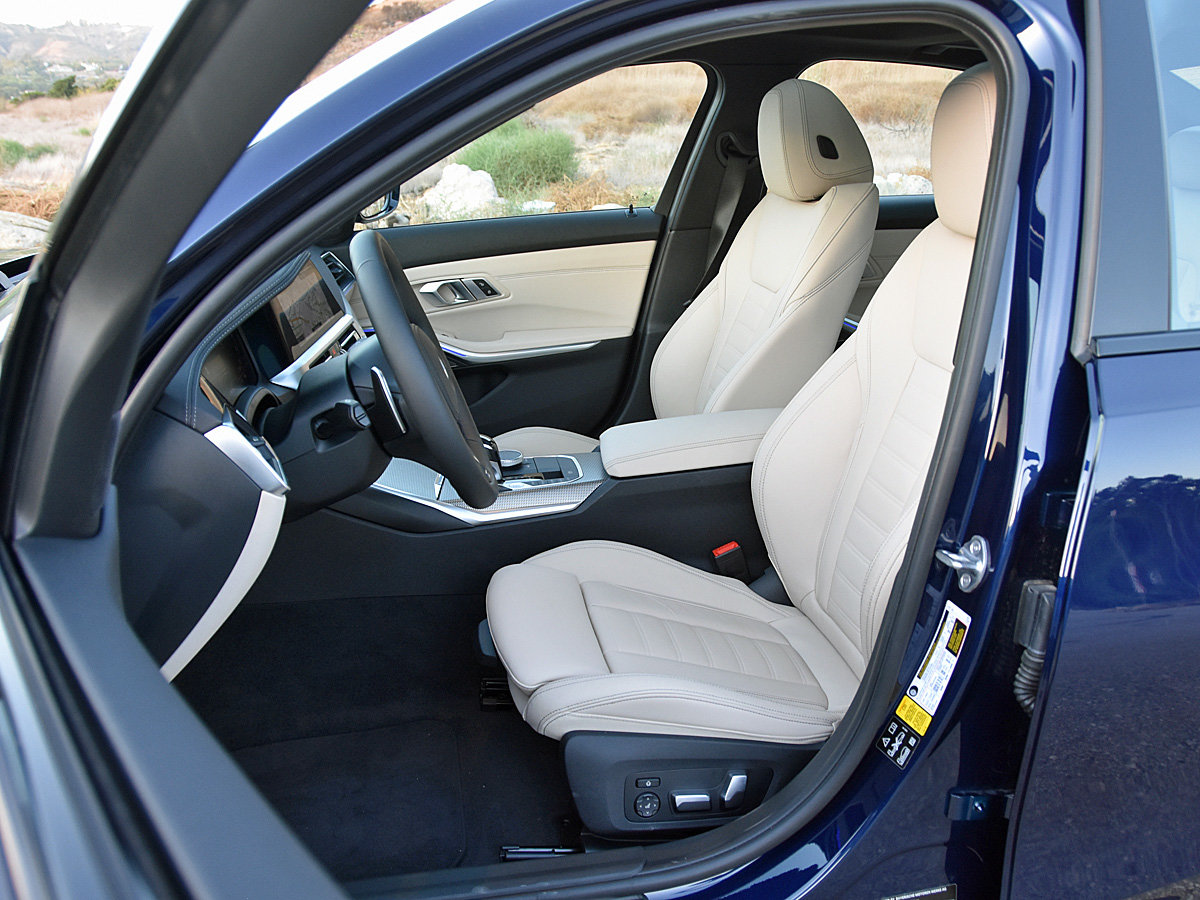 Simple and supportive, the 3 Series' front seats easily hold you in place while you explore the car’s handling capabilities. At the same time, they prove both accommodating and comfortable for longer periods of time. That’s important, given that the car begs to be driven even when you’ve got nowhere in particular to go.

Equipped with high-quality leather, front-seat heaters, and a heated steering wheel, our M340i xDrive test car was ready for winter. However, I tested it during an end-of-summer heatwave, and I wished BMW offered a ventilated seat option.

Rear-seat entry and exit proved awkward for me, but once inside, the 3 Series proved exceptionally comfortable. BMW positions the seat cushion and seatback in a way that provides terrific support, and substantial side bolsters snug you in closer to the center of the car. My middle-aged abdominals, however, made a mockery of me as I tried to exit with anything approaching grace.

As is BMW tradition, some controls are hard to find or cryptic in terms of function. The climate controls are somewhat clumsily integrated with the vents, there is a proper stereo volume knob but a button for station tuning, and the digital instrumentation looks more like a video game than a proper BMW’s classic round gauges.

At the same time, however, the widescreen infotainment system screen is deftly integrated into the dashboard design, the latest 3 Series has the best version of iDrive in history, and BMW equips the car with one of the best natural voice recognition systems I’ve ever used.

Storage space is remarkably generous for a BMW, and today’s car buyers will definitely appreciate the covered bin forward of the shifter that contains an optional wireless smartphone charger. Officially, trunk space measures 17 cubic feet, and while the trunk is deep, it is also narrow. Put a full-size suitcase into it, and it’s hard to see how the M340i holds more cargo than a typical family sedan. It certainly looks like it carries less. 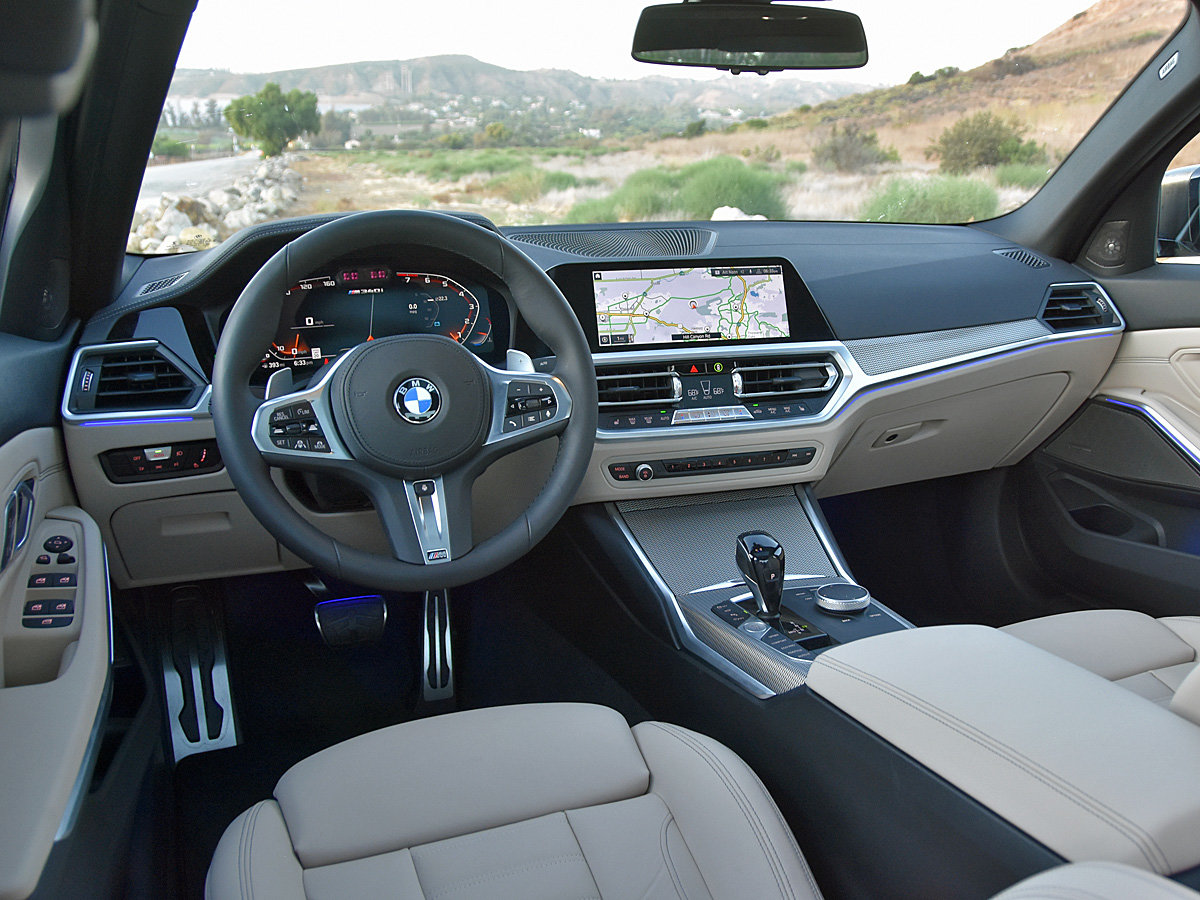 Once upon a time—when it debuted nearly 20 years ago—BMW’s iDrive infotainment system was regarded as technology run amuck.

Today, the latest version has little in common with the original. It features a touchscreen display, natural voice recognition, and gesture control in addition to the now-familiar knob and buttons on the center console. With four main ways to interact with the system, it’s easy to pick a favorite or mix-and-match for more intuitive operation.

Topographically, the controls on the center console aren’t as clearly defined as they were before, sitting on a nearly flat pad that looks clean and minimalistic but makes it harder to use them by touch.

Working similarly to a smartphone display, the touchscreen is terrific. Menu pathways are instinctive, and BMW has done a good job making a complex vehicle seem simple and easy to understand.

Gesture control is optional. Somewhat gimmicky, it turns a twirl of your finger into volume adjustment, and a hook or your thumb will change the radio station.

The “Hey, BMW” voice recognition system is excellent. It works similarly to a smartphone or home speaker assistant, responding to natural commands related to navigation, climate control, the stereo, and more. It can even find local, non-chain restaurants.

My test car also had the latest BMW head-up display, which is miraculously visible while you’re wearing polarized sunglasses. It’s faint, but you can see it. Baby steps, BMW, baby steps. 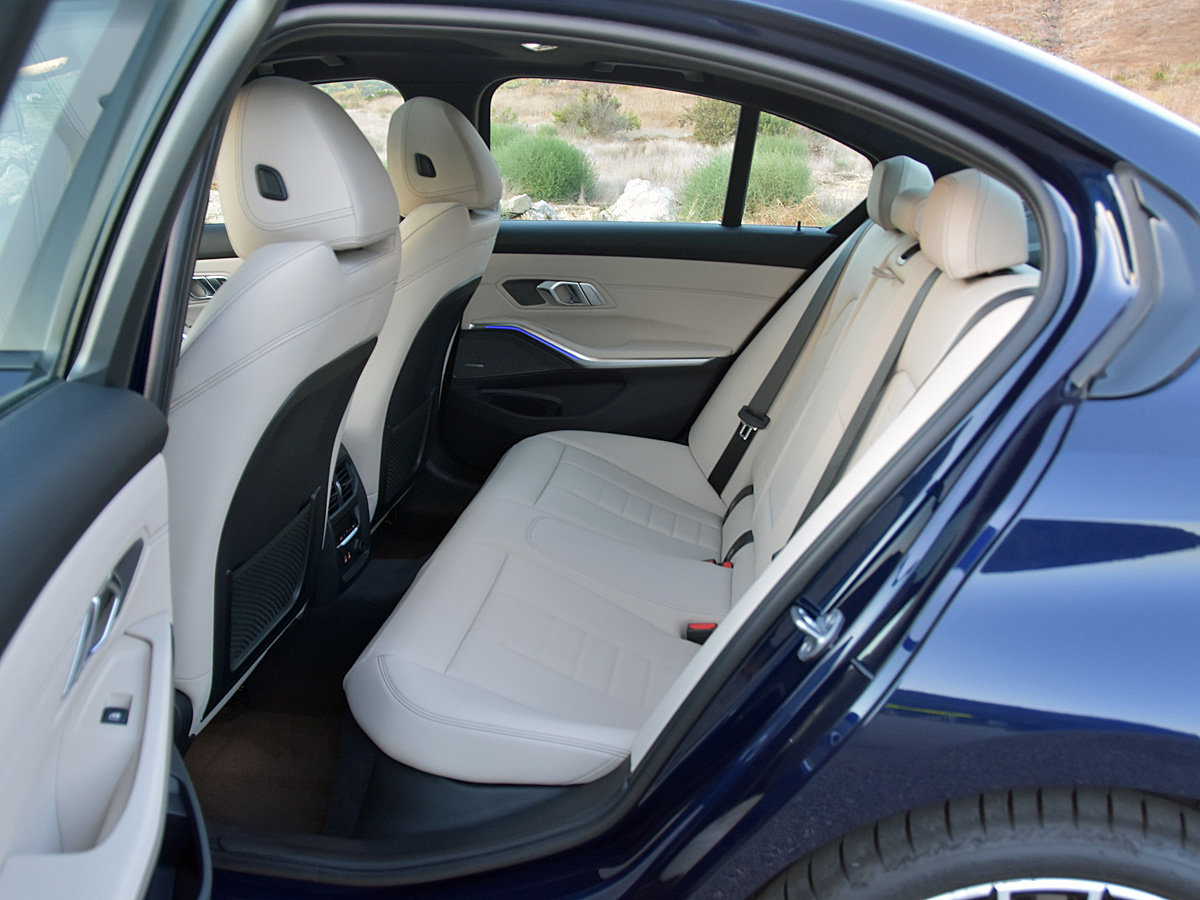 To equip a BMW 3 Series with all the company’s latest and greatest advanced driving assistance systems (ADAS), you need to option the car with two Driving Assistance option packages.

Frankly, I think you can save yourself some money by skipping them. In my experience, while the systems proved accurate during the few times I used them, smoothness was sometimes hard to come by. Besides, this car is so much fun to drive, I can’t imagine why anyone would want to turn everything over to cameras, sensors, and lines of code.

I will, however, admit that the rather rude and abrupt lane-keeping assist system is appropriate. It’s almost as though BMW is admonishing you to pay closer attention, reminding you that you’re behind the wheel of an ultimate driving machine, and you’re expected to be an active participant in the proceedings.

Should the ADAS fail to prevent a collision, rest assured that the BMW 3 Series is ready to take one for the team. The Insurance Institute for Highway Safety (IIHS) gives the 3 Series a Top Safety Pick+ rating when the car is equipped with the adaptive full LED headlights. 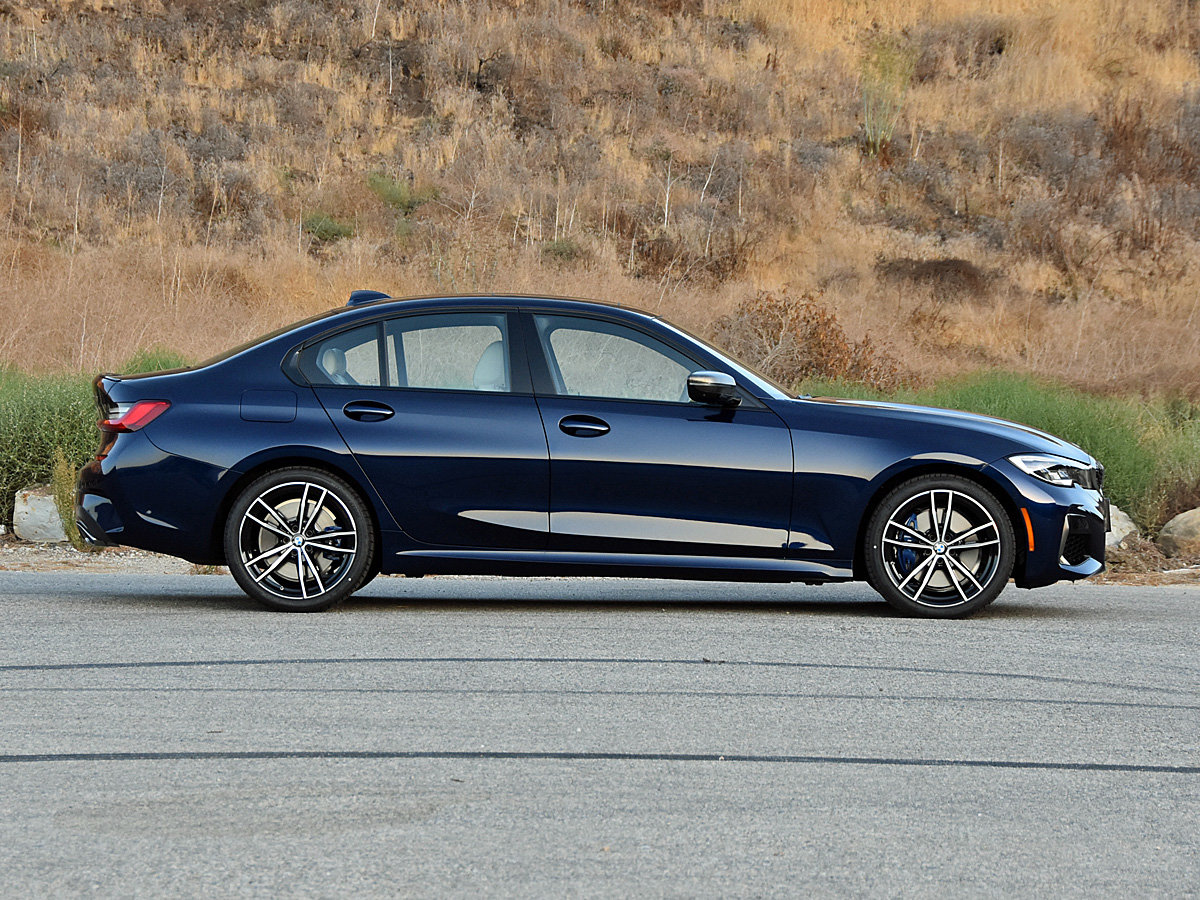 Though it includes free scheduled maintenance for the first three years or 36,000 miles of ownership, a BMW is rarely a cost-effective choice in a car. Starting prices are high, everything you really want costs extra, and before you know it, you’re blowing almost 70 grand on a 3 Series.

But, just like Disneyland, a BMW M340i delivers an immersive and legendary experience you simply can’t find anywhere else. And for that, you must pay.

True driving enthusiasts will find real value in the M340i. And for this performance-tuned version of the latest 3 Series, that might be all that matters.

David If BMW truly used high-quality leather, why would they spray paint it? My BMW 328i E-93 N-51 S704A has split leather with a fake leather grain and sprayed color (Cream Beige). Lower optioned BMWs have plastic seats. Tell me I'm wrong, but "high-quality leather" is probably plastic but could be split leather. The seats are immensely comfortable whether faux, split, or full leather.

Users ranked 2020 BMW 3 Series against other cars which they drove/owned. Each ranking was based on 9 categories. Here is the summary of top rankings.

What Type Of Fuel Should Be Used In A New Bmw

Have purchased a 2020 s drive 20i x3 bmw. Am only using 95% octane. Is this a waste of money or would it be tuned to accept the premium fuel?

does BMW cover the down payment when you lease with GAP

Would you be able to have 3 car seats in the back of a 3 series touring, with the increase in rear seat with the updated model ? The Britax Graphene is 440mm in width for example could 3 of these ...